May 7, 2013:  Here are the last photos of the Champ on the ramp at Folks Field taken at 9:03 AM.  Wendell Folks and Terry McDowell take a much more leisurely trip this time compared to their five-day trip to Alaska in 2007 when Wendell sold his Cessna 182 and delivered it to Anchorage.  The trip this time is expected to be two days to Amarillo, Texas.  Terry's wife was here to see them off and snap this photo with his camera. 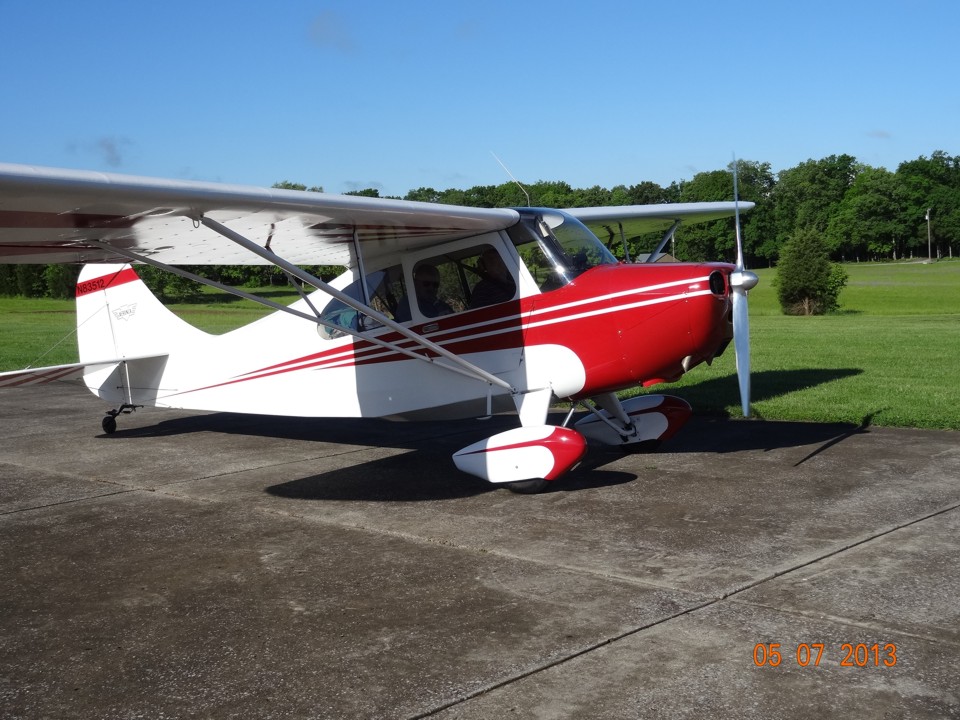 The last minute checks of GPS waypoints are made before departing the ramp. 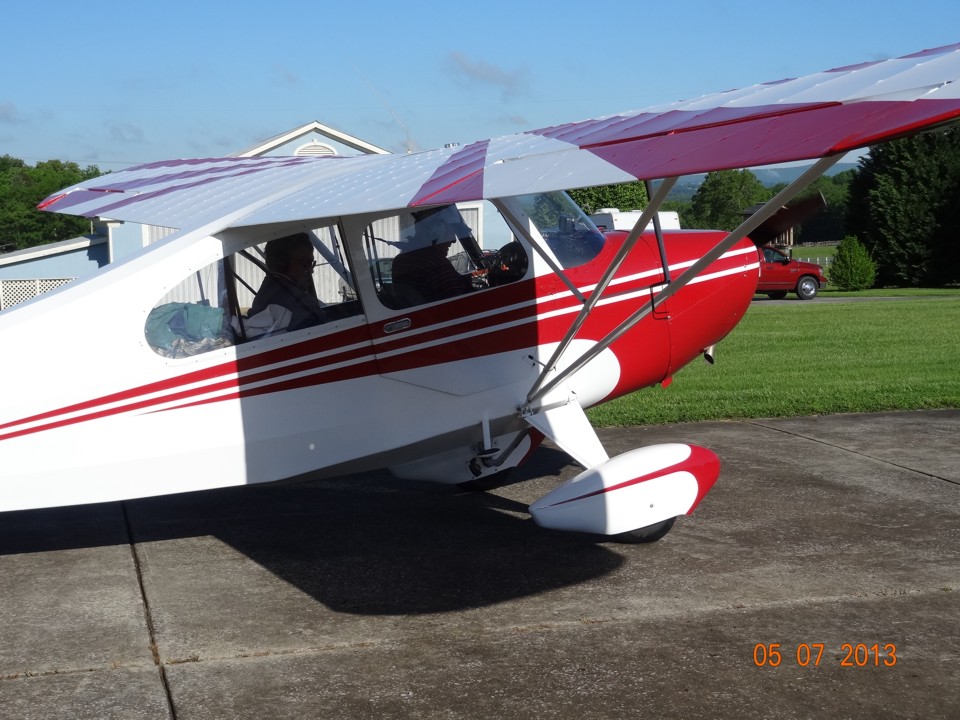 The engine run-up test is done at the north end of the runway before the take off roll.  Wendell will fly the first leg of the trip. 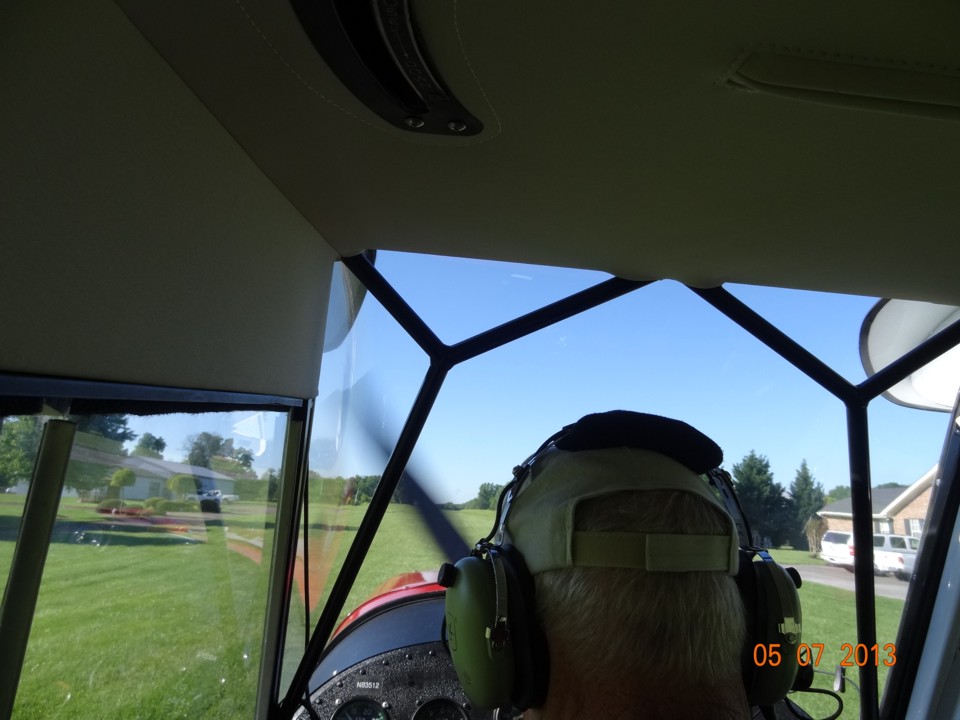 The takeoff roll begins at 9:07 AM as Terry snaps this photo from the back seat of the Champ. 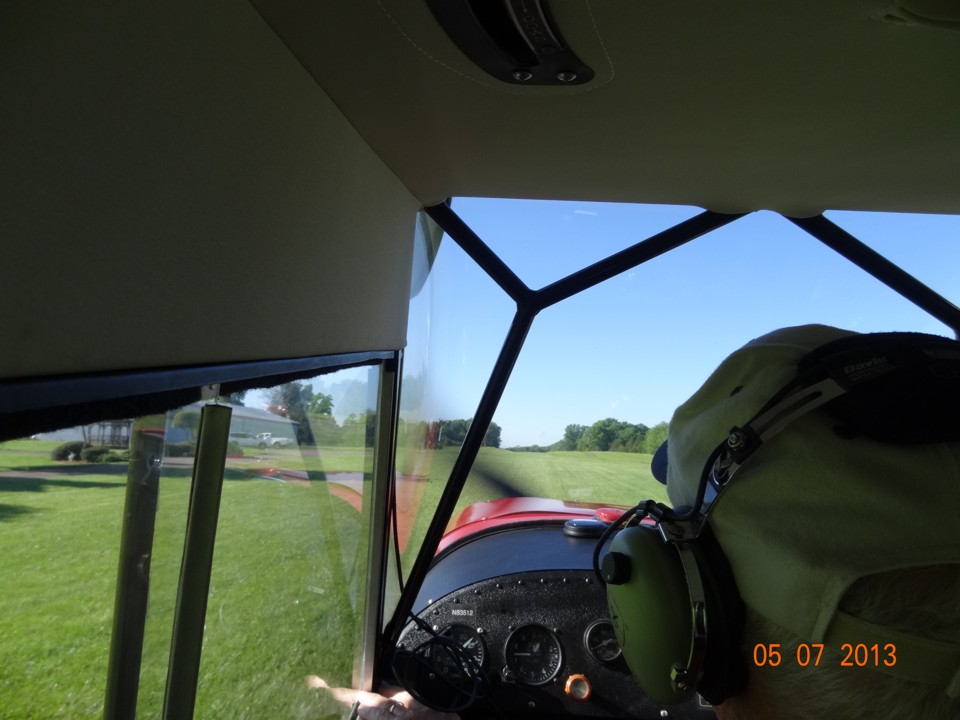 Terry's wife and Wendell's friend "Cool" wave goodbye as the Champ gathers speed for the takeoff.  The angle of the camera is a reminder this classic airplane has a tail wheel. 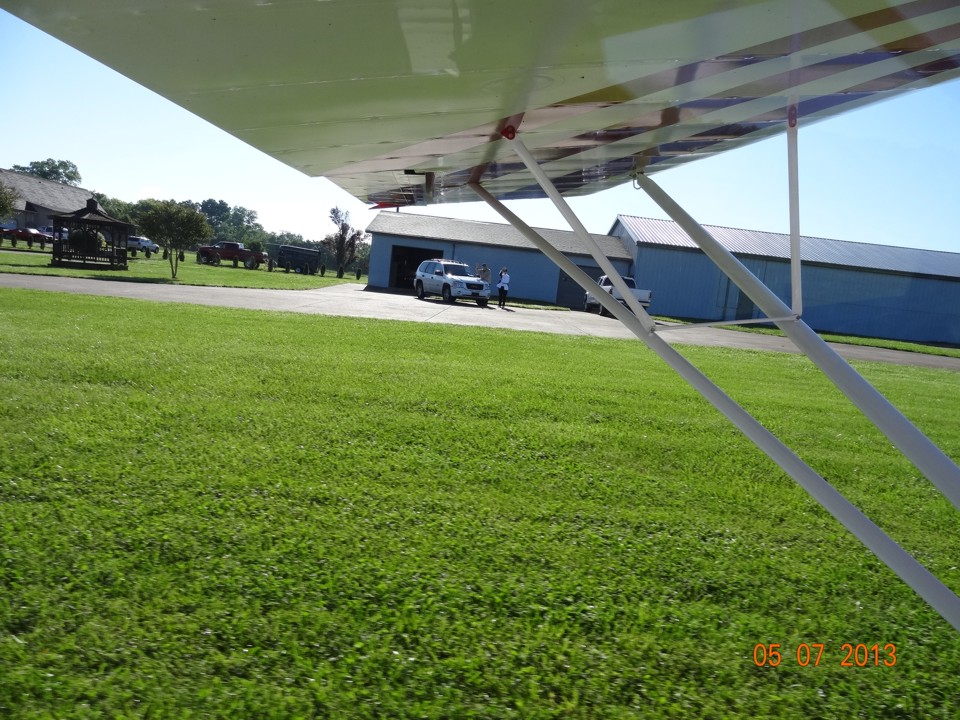 The pass over the field at 9:09 AM before departure provides a good photo of home and some needed altitude before heading west toward Lookout Mountain.  That patch of bare ground to the right of the hangar is prepared for this year's garden. 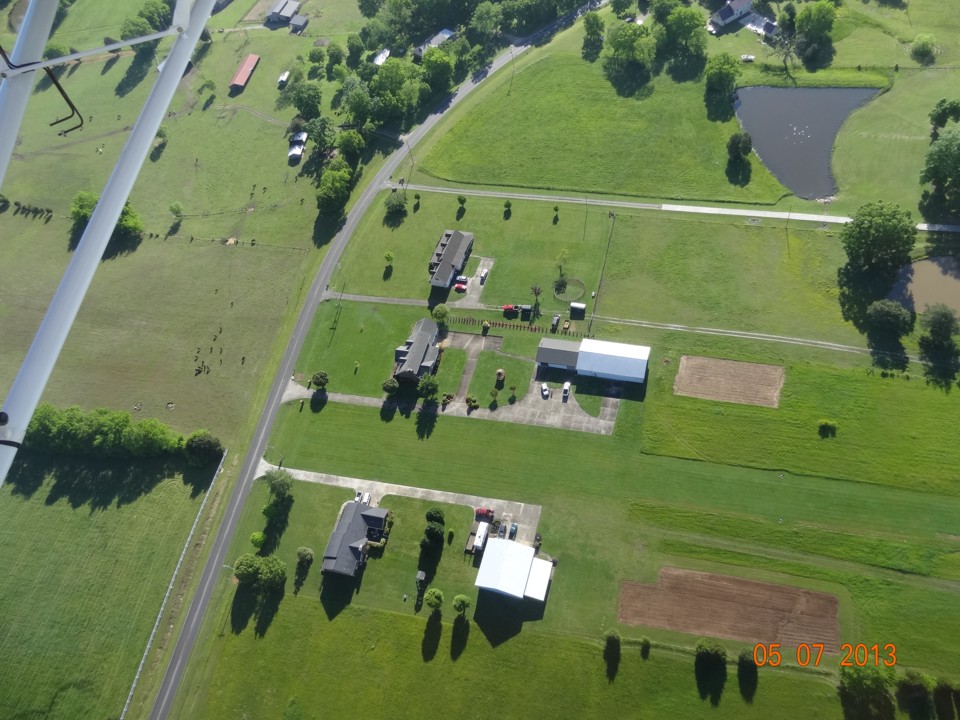 Here is the view looking north toward Point Park from above Lookout Mountain with an elevation of more than 2,160 feet MSL near the point.  This photo was taken at 9:16 AM Eastern Time as they cross the first mountain in today's trip. 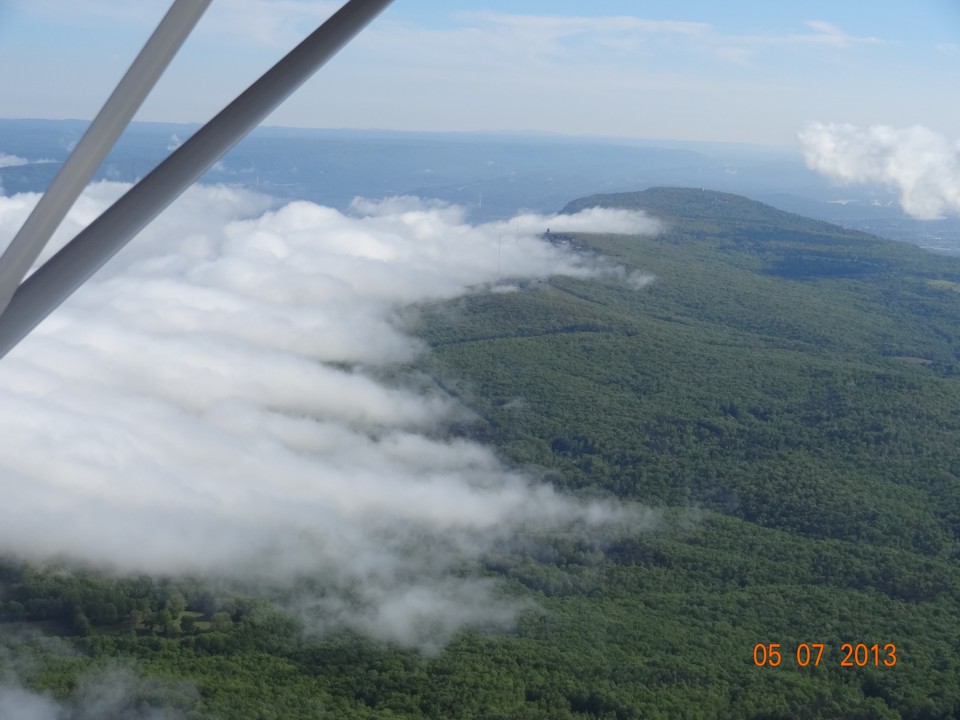 These are the low mountains of the Cumberland Range.  The center of Tennessee is dominated by the Cumberland Plateau.  These mountains are south of the Plateau near the paths of Interstate 24 and US 41 heading west from Chattanooga before turning northwest toward Nashville at a point about 30 miles west of Chattanooga.  The valleys ahead are filled with low clouds partly because of the proximity of the Tennessee River. 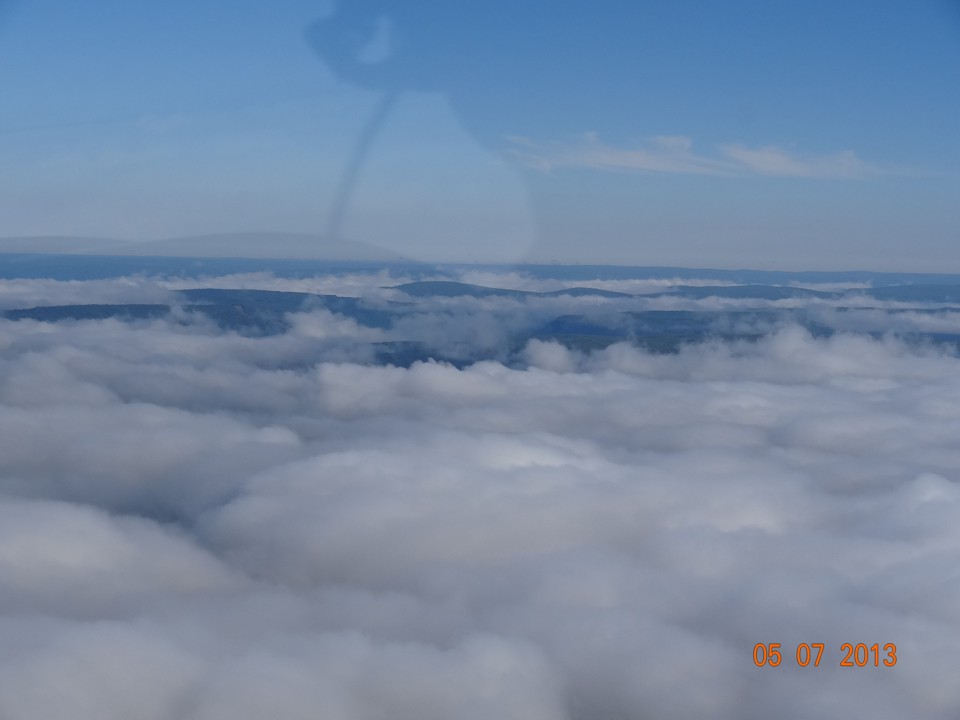 The view looking south at the top of Lookout Mountain indicates the higher elevation is at the west brow.  Notice how the clouds in the valley to the west dissipate as they reach the top of the mountain while moving from west to east (right to left in this photo). 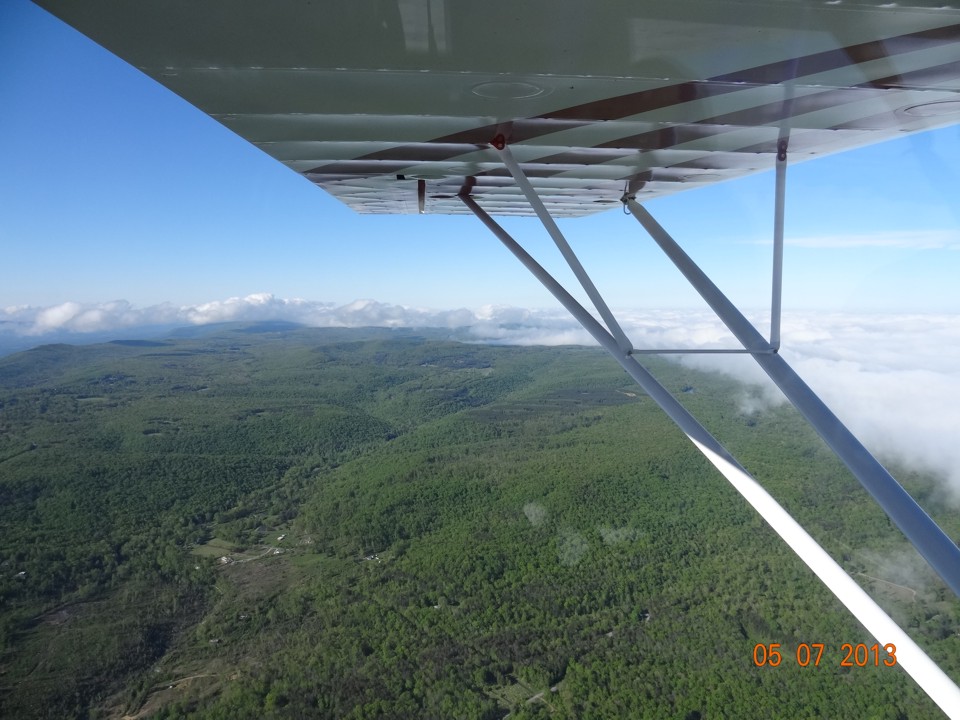 The GPS shows 92.9 miles to the Lawrenceburg, Tennessee airport.  The total distance from Folks field to that airport is 117 miles.  The current position at 9:17 AM is about 14 miles from home.  The ground speed shows 88 MPH, which says there is not much of a headwind, if any.  The Aeronca Champ is slow compared to Van's RV's. 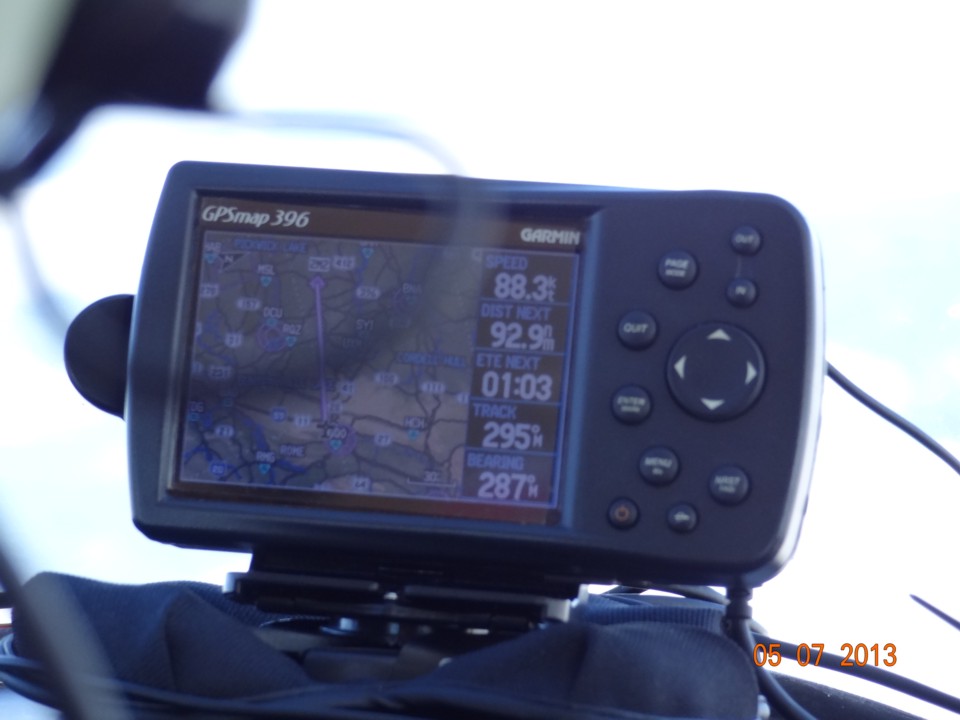