Saturday, July 31, 2004: More of the stuff I saw on Saturday is shown below. When I heard that Mattituck was assembling and disassembling one of their ECI Titan engines, I had to stop by to see what it was all about.  And as luck would have it, this was the day they disassembled it.  This was great for me since I could see what makes this thing run!  That is John Haas, inspector for Mattituck, showing off 1/2 of the crank case with the cam shaft in it to a prospective customer. 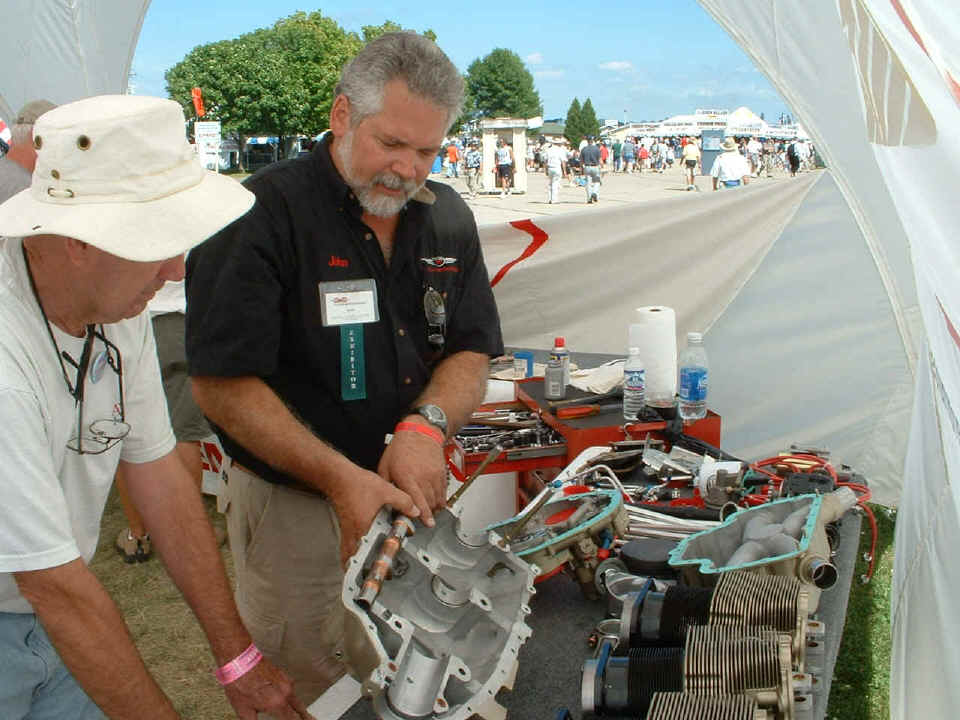 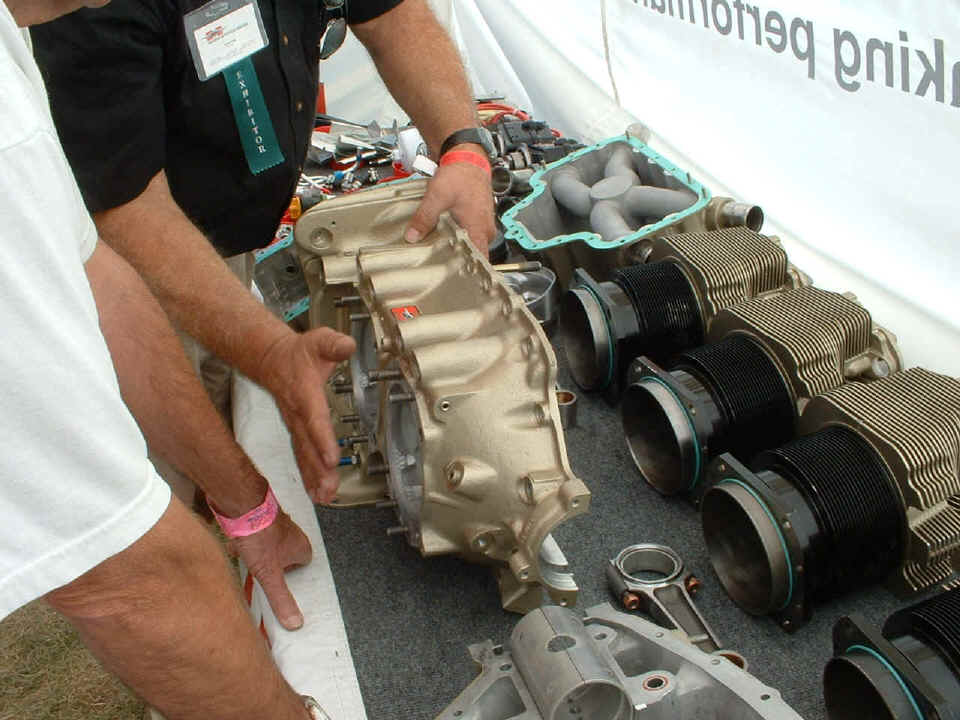 Here is a simple part of any engine, the oil filter.  This one is set at right angle to the normal position on most Lycoming engines.  It is also a filter with a check valve in it to prevent oil from running out when the filter is being removed at oil change time. 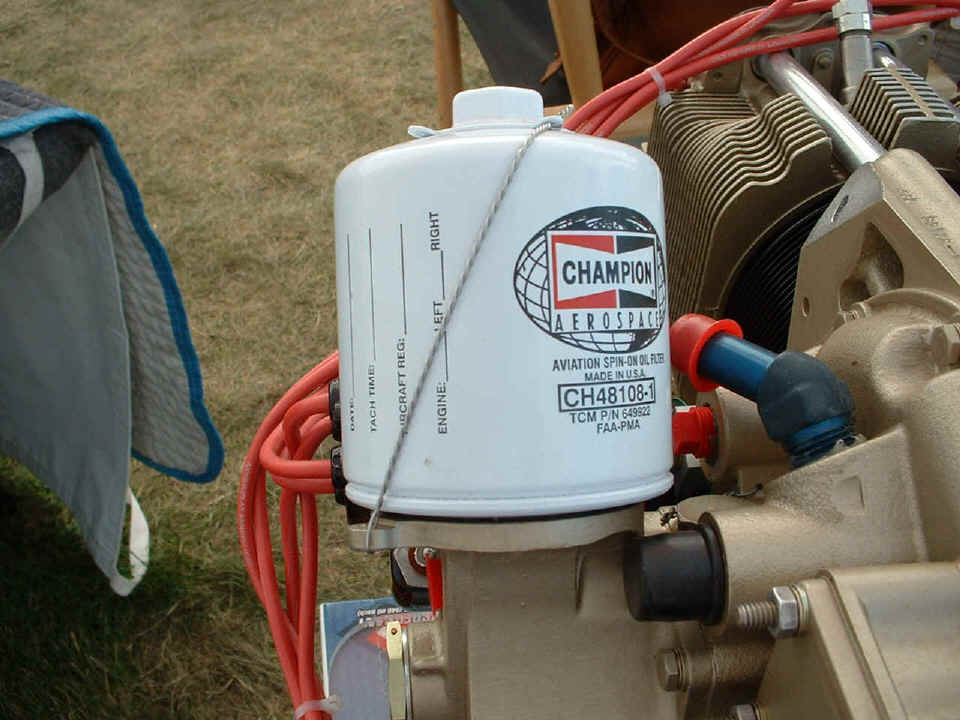 Here is the view from above left of the rear of the engine.  Notice the two fittings between the oil filter and the crank case.  And there are more that have to get past all this and the fuel pump (which is not on this model) seen in the second rear view photo below. 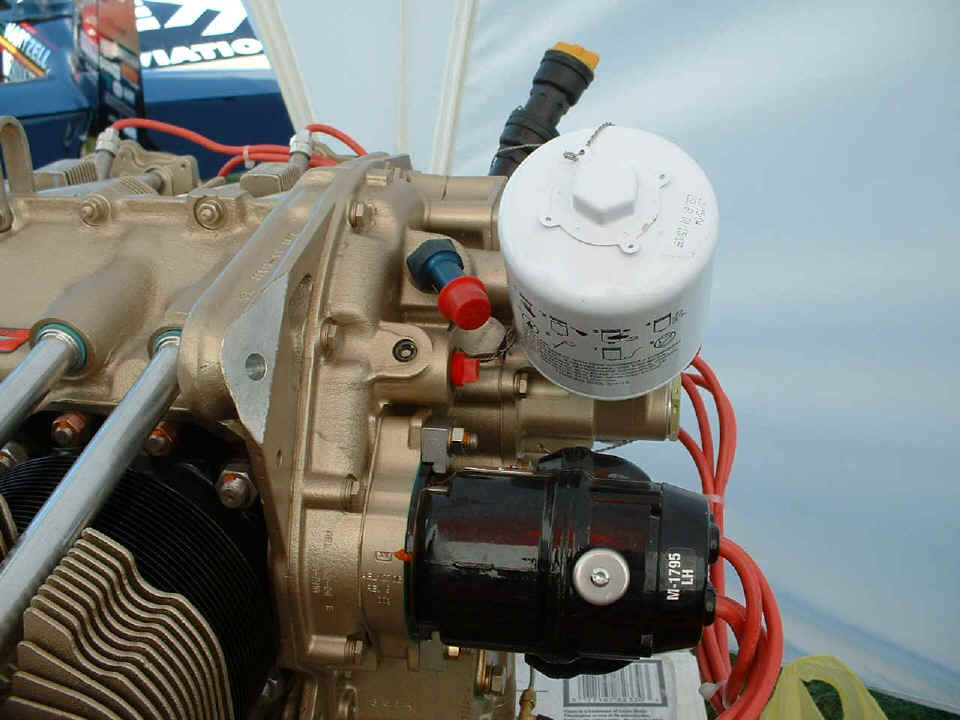 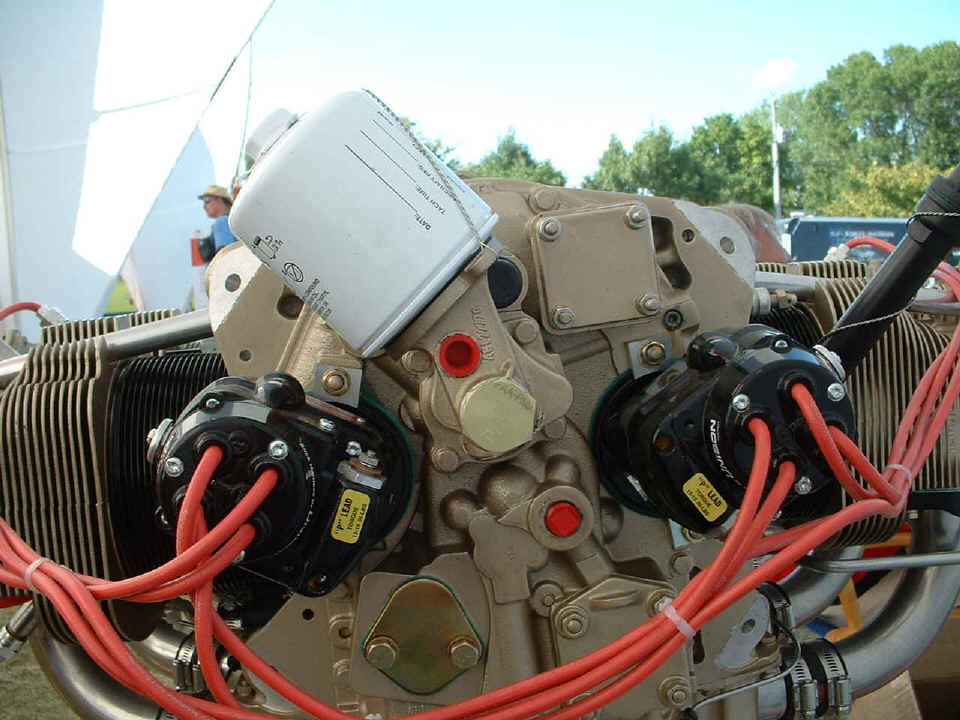 The engine-driven fuel pump goes on where that anodized plate appears near the bottom center of the photo above.  This engine has two standard aircraft magnetos for spark plug ignition.  There is no vacuum pump or propeller governor on the engine.

The main guest speaker of the evening was Jon Johanson, RV-4 builder extrordinare and world-rounder pilot.  He has made one trip around the world going EAST, one trip going WEST, ONE over the NORTH POLE, and one flight over the SOUTH POLE.  Here he is signing his autograph on one of the cards that were on the banquet tables for any of us who asked.  Mine is scanned for you to see below. 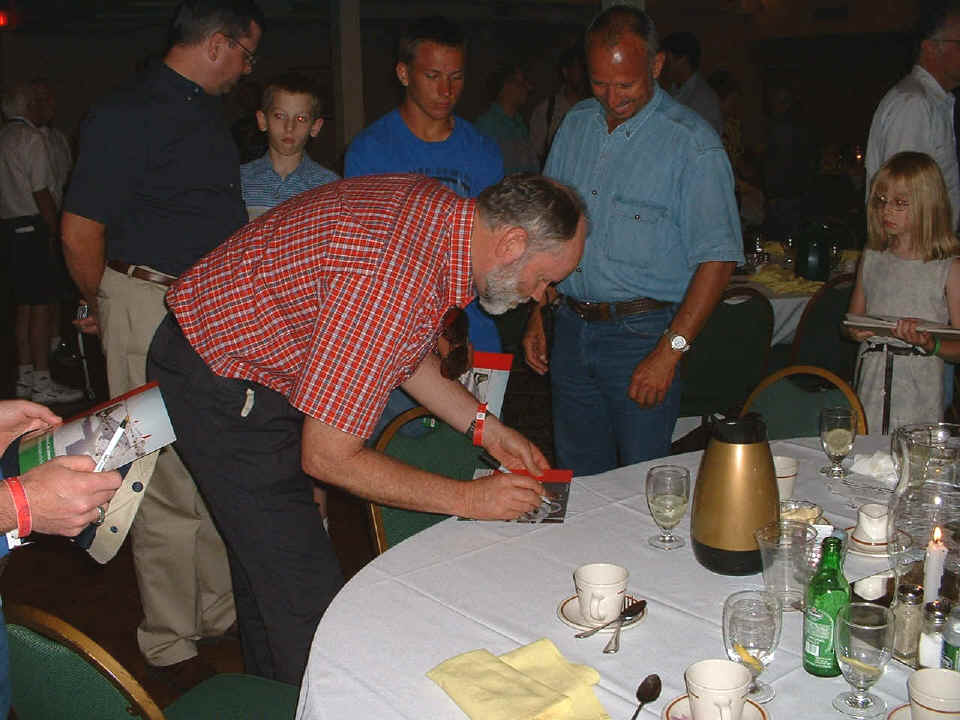 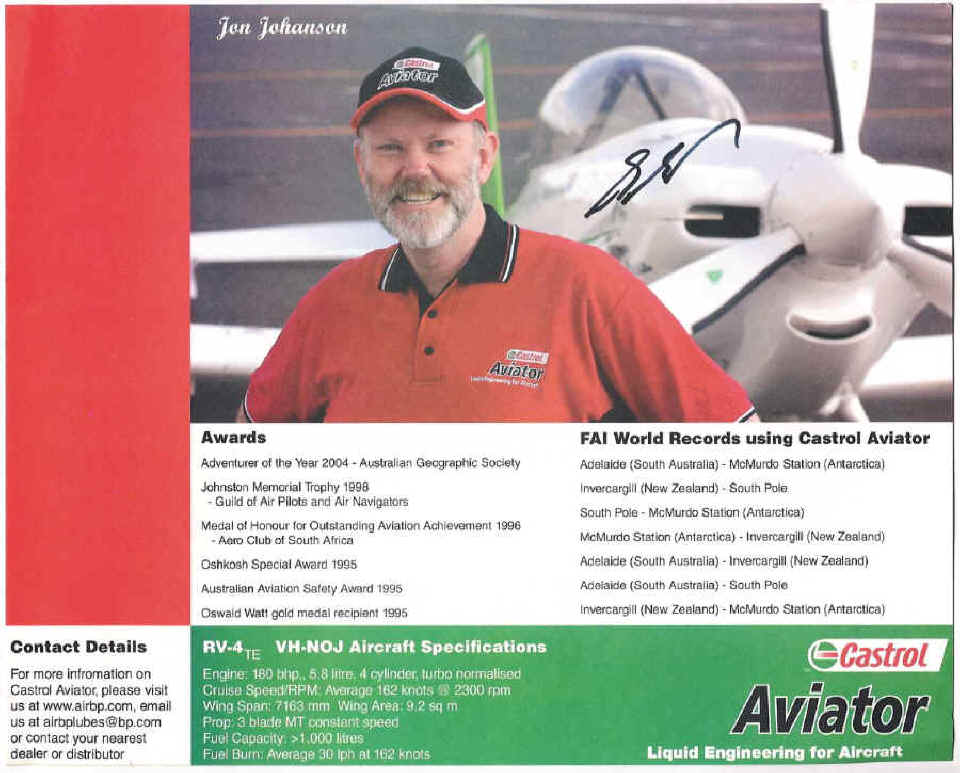 I left the scanned image a bit larger to make it easier to read some of the text.

Below left is the man who started all this fine RV madness, Richard Van Grunsven, president of Van's Aircraft.  You can learn all about the birth of the RV family of aircraft at this LINK. 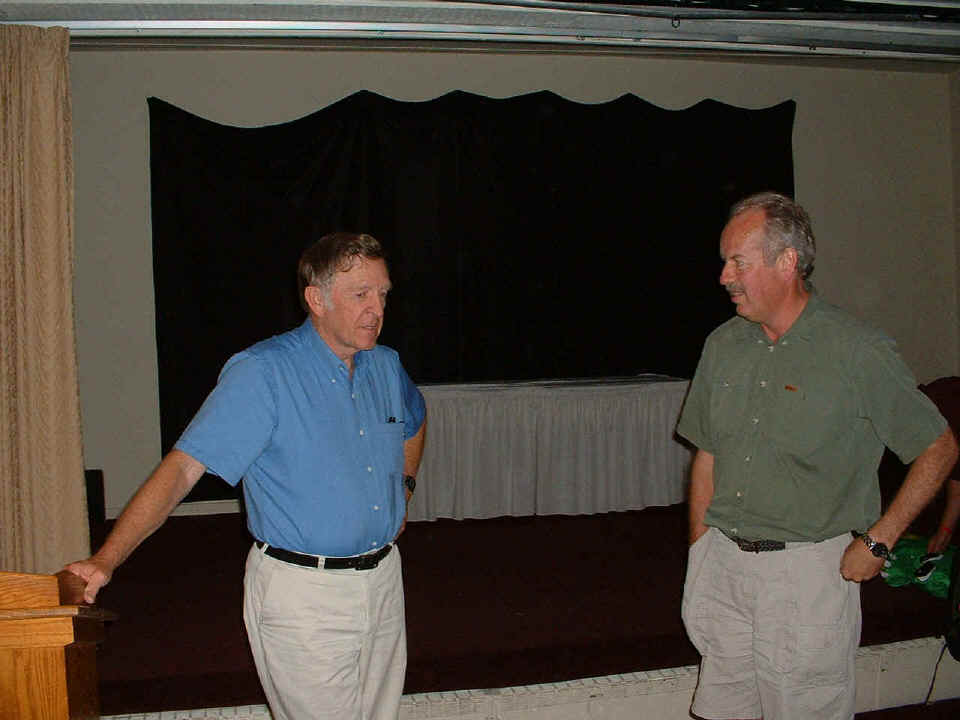 I headed out of Oshkosh right after the banquet and got past Chicago before searching for a hotel room.  I finally ended up in LaFayette, Indiana before finding a room for the night at 4 AM Central time.  I slept in until 9:30 AM and hit the road for Nashville.  I wanted to stop by the home of Robert Tugwell to see how he installed his canopy cable opening system on his RV-6.  It did not take long to see what was necessary to fit the kit to the RV-9A canopy which has some dimensions that are different from the RV-6A canopy.  Here is his installation.  Note the placement of the Hobbs meter and the baggage L.E.D. light fixture.  Although I did not take a picture of it, his cable crosses the angle with the notch in it very closely.  I have an idea of how to get mine to do the same thing, but time to do it has eluded me over the past few days of catch-up work for the company.

In case you haven't figured it out yet, I did not see much of US 41 on the way home.  It was quick and ugly along the interstates, including a traffic jam on the south side of Chicago at 1:30 AM.  When I hit that, I took off across city streets using GPS guidance and Street Atlas USA to reach US 41 and traveled along Lakeshore Drive down to the Indiana state line.  From then on, it was all interstate roads except for my side trip to Tug's place in the Nashville area.  Oddly enough, as I was getting close to Nashville, I had to divert again to state roads when I-65 got to be a parking lot north of Nashville.