November 27, 2003:  After 10 days on the road, I have returned for the Thanksgiving holidays and managed to get in a good SEVEN hours of work on the RV-9A today and do my laundry, too.  This was another milestone day, the attaching of the horizontal stabilizer and the first test fit of the vertical stabilizer to the rear of the fuselage.  It made for good photos!  I had already finished drilling the elevator control horns and connecting the elevator push rod to them before I took this picture.  I had to move the drill press/grinder/band saw table away from this end of the shop to make way for the horizontal stabilizer and elevator to attach. 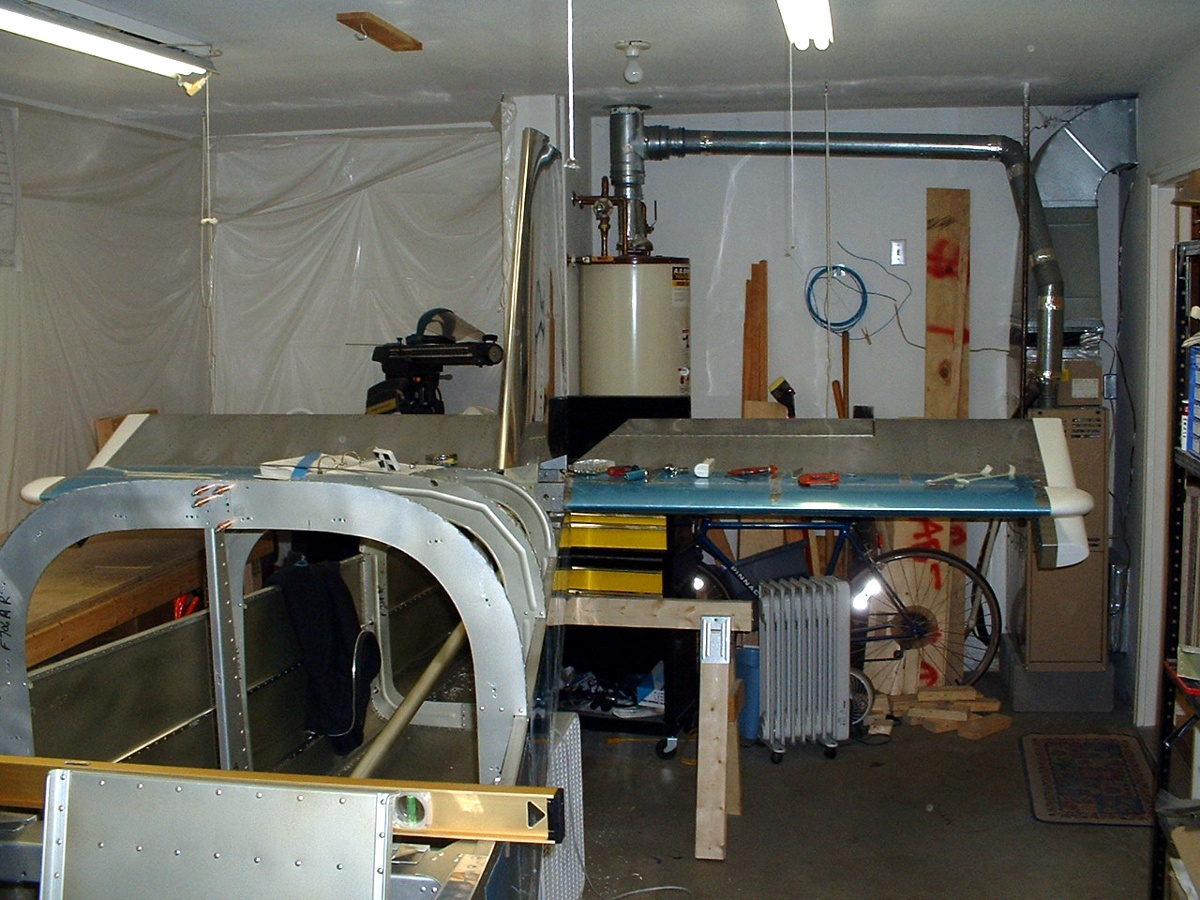 Here is a side view from the kitchen door to further illustrate the accomplishments today.  That spot on the vertical stabilizer is not really there.   I did not notice it in the photo until just now, when I pasted it into this web page.  I have already removed the elevators to make some minor adjustments to the rod-end bearings for additional clearance from the horizontal stabilizer rear spar.   I have also determined the correct number of spacer washers at the center bearing where the elevator control arms are secured to each other.  I grasped the pilot's joy stick and found the elevators moved up and down smoothly except for a minor skin rub, hence the rod-end bearings moved out 1/2 turn for the clearance needed. 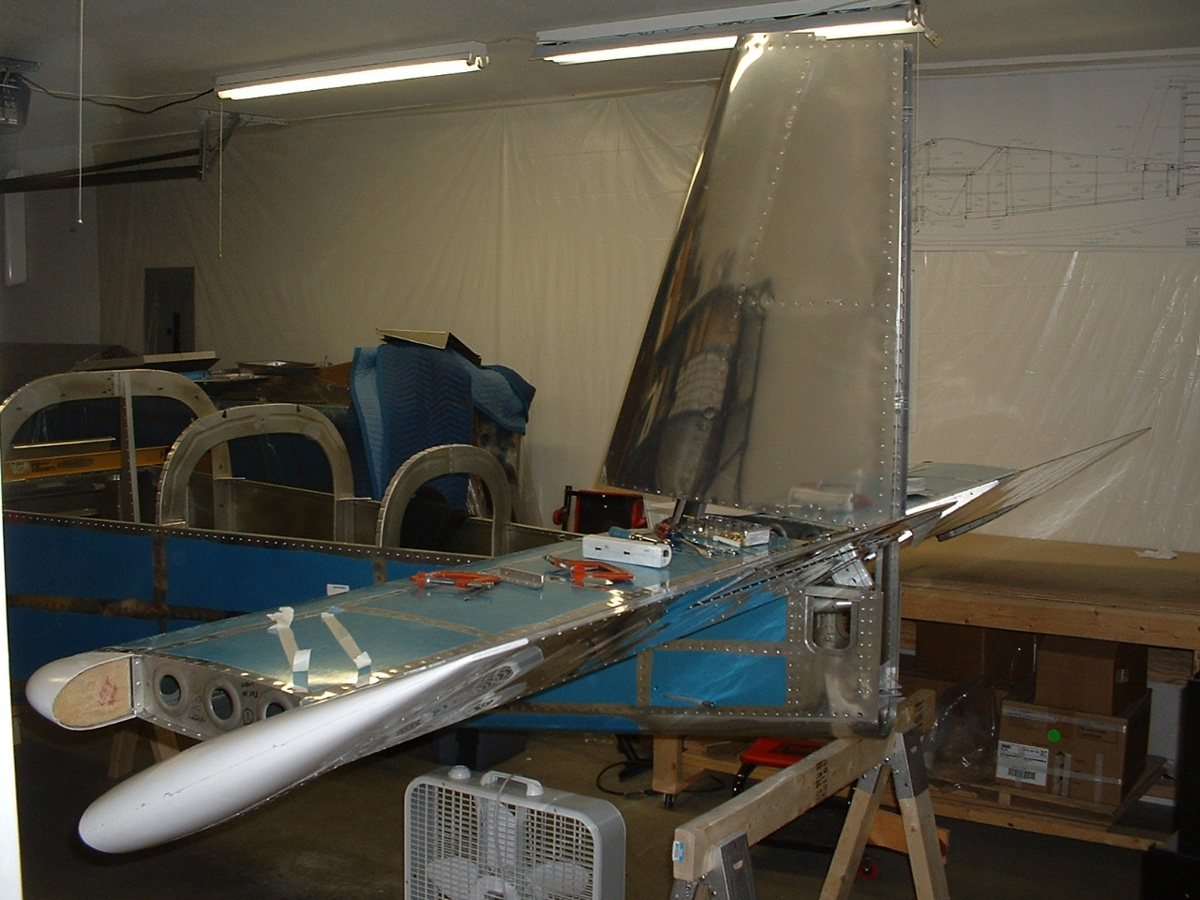 You can see that the elevator counter weights and the elevator push rod has created an "up-elevator" condition.  The counter-weights are one of the last things to be adjusted in "FINAL" assembly near the end of the project before flight testing. 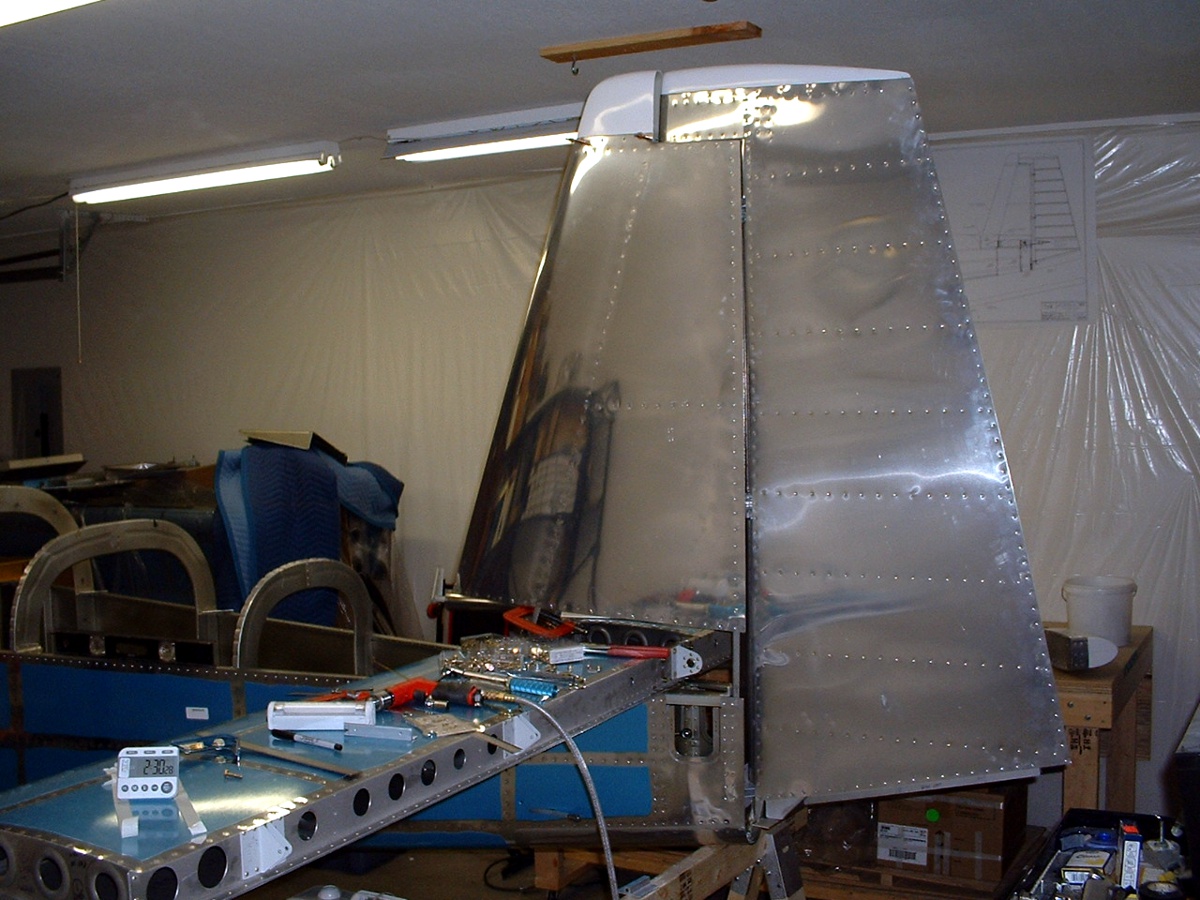 Here is the vertical stabilizer attach bracket after riveting it to the VS front spar. (

on December 7, 2004)  There is a slight offset of the vertical stabilizer as a result of the shape of the VS attach bracket.  This was designed in by Van's to offset engine thrust.  I am told by David Edgemon that there is also a bit of offset thrust alignment in the engine mount as well.  As of this writing he has almost 20 flight hours on his RV-9A and is finally getting all the fairings and wheel pants in place. 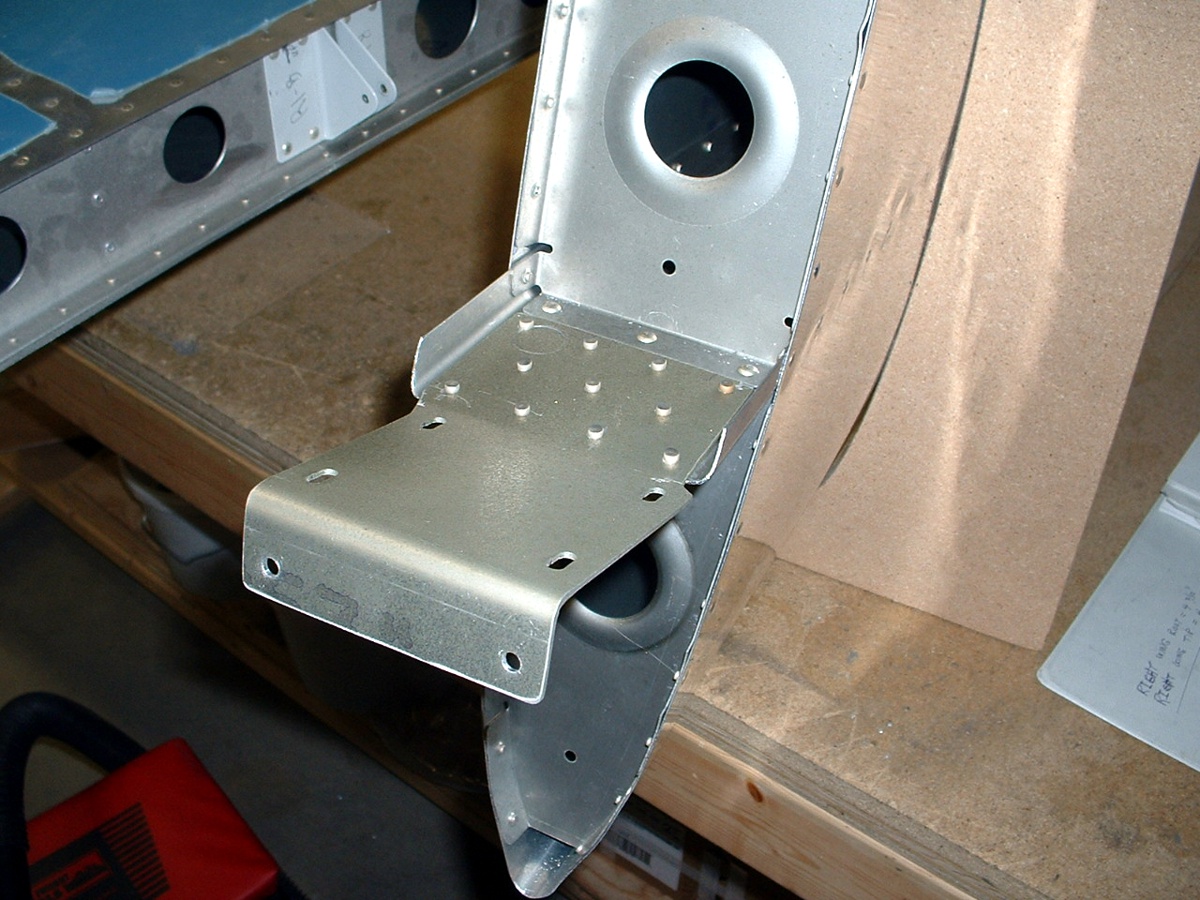 November 29, 2003:  Not much time to work on things today -- only 2.1 hours.  I removed the tail feathers and put them away after riveting on the rudder stops at the back of the fuselage.  I got the armrests out and managed to get one of them riveted in place.  You can see the modification I made to strengthen the armrests with 6061-T6 aluminum angle.   This is the same angle stock used for the seat backs and the main longerons -- 3/4" x 3/4" x 0.125" thick.  That short angle in the picture below will be riveted to the bulkhead behind the seats.  It holds up the long angle that runs along the "inside lip" of the armrest.  Van's design had nothing here to support the F920L armrest.  I told David Edgemon about my idea, but he used 0.060" thick aluminum angle for his reinforcement. 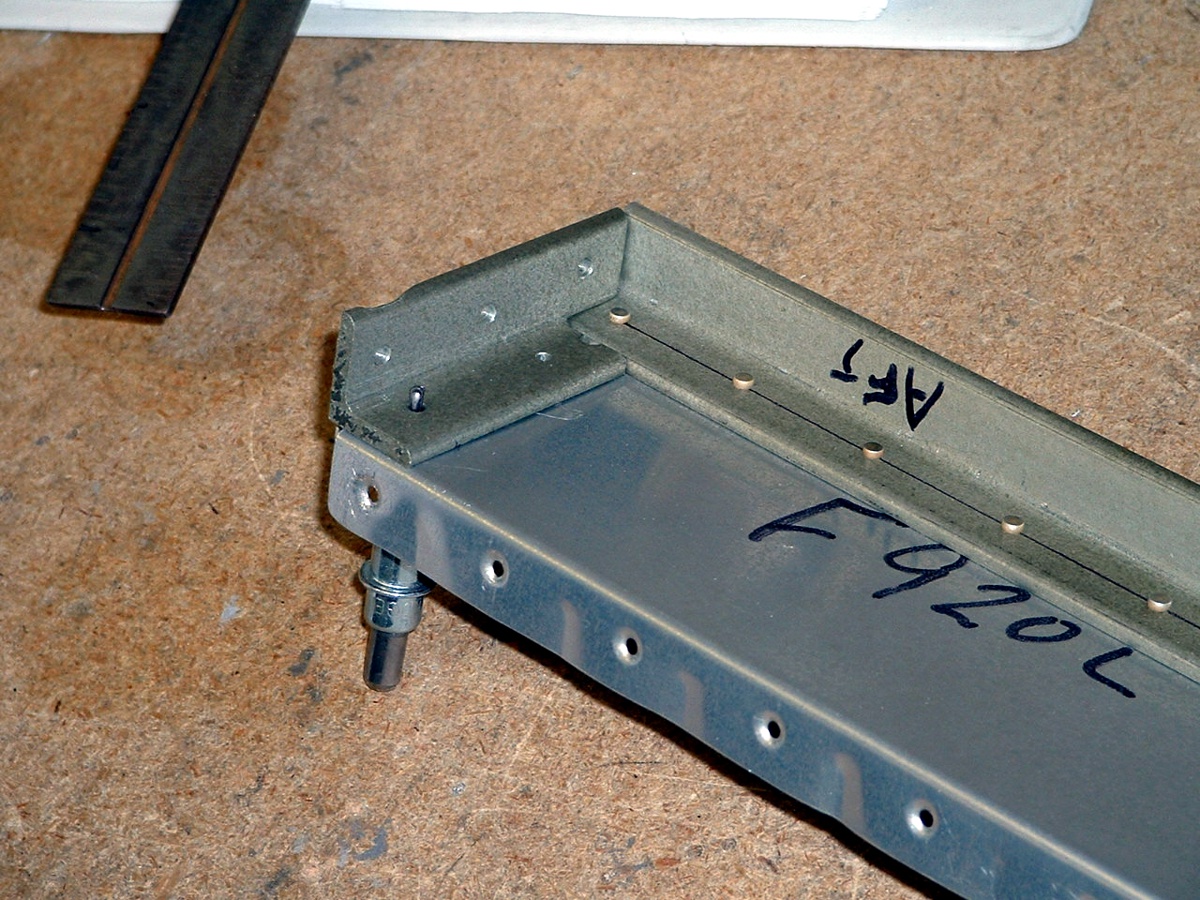 Here is how it looks installed on the LEFT side of the cabin. 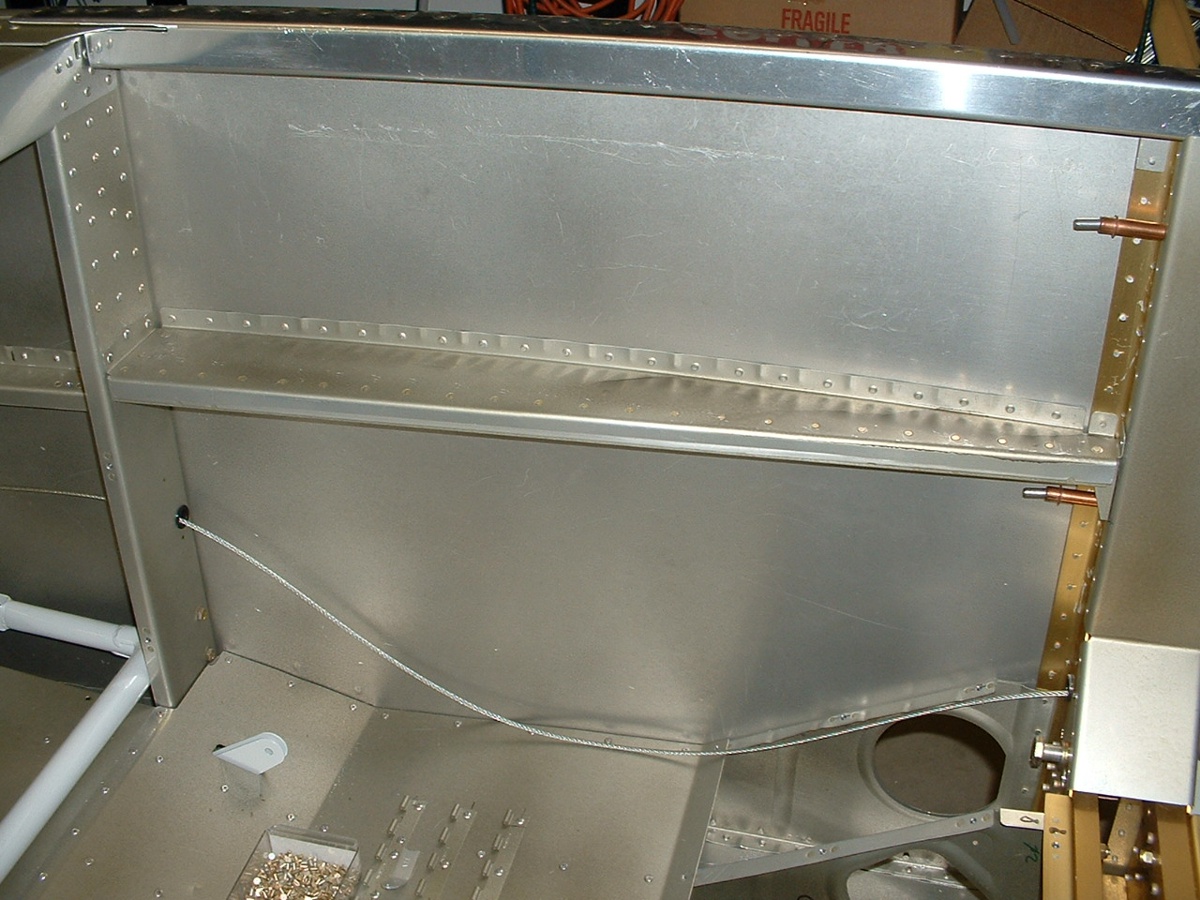 Here is the attachment at the aft end of the armrest.  There was one existing rivet here that needed to be cleared by the short angle.  I ground away just enough metal to clear the rivet.  As you can see by the clecos, I took this picture before riveting the cross brace to the bulkhead.  The sequence is to rivet the short angle in first, then put the armrest in place to put two rivets through the armrest into the support angle.  The longer angle was riveted to the armrest weeks ago using the same hole spacing as the side skin to armrest rivet pattern.  The rivets holding the armrest to the angle are all #3's.  The rivets holding the short angle brace to the bulkhead are all #4's. 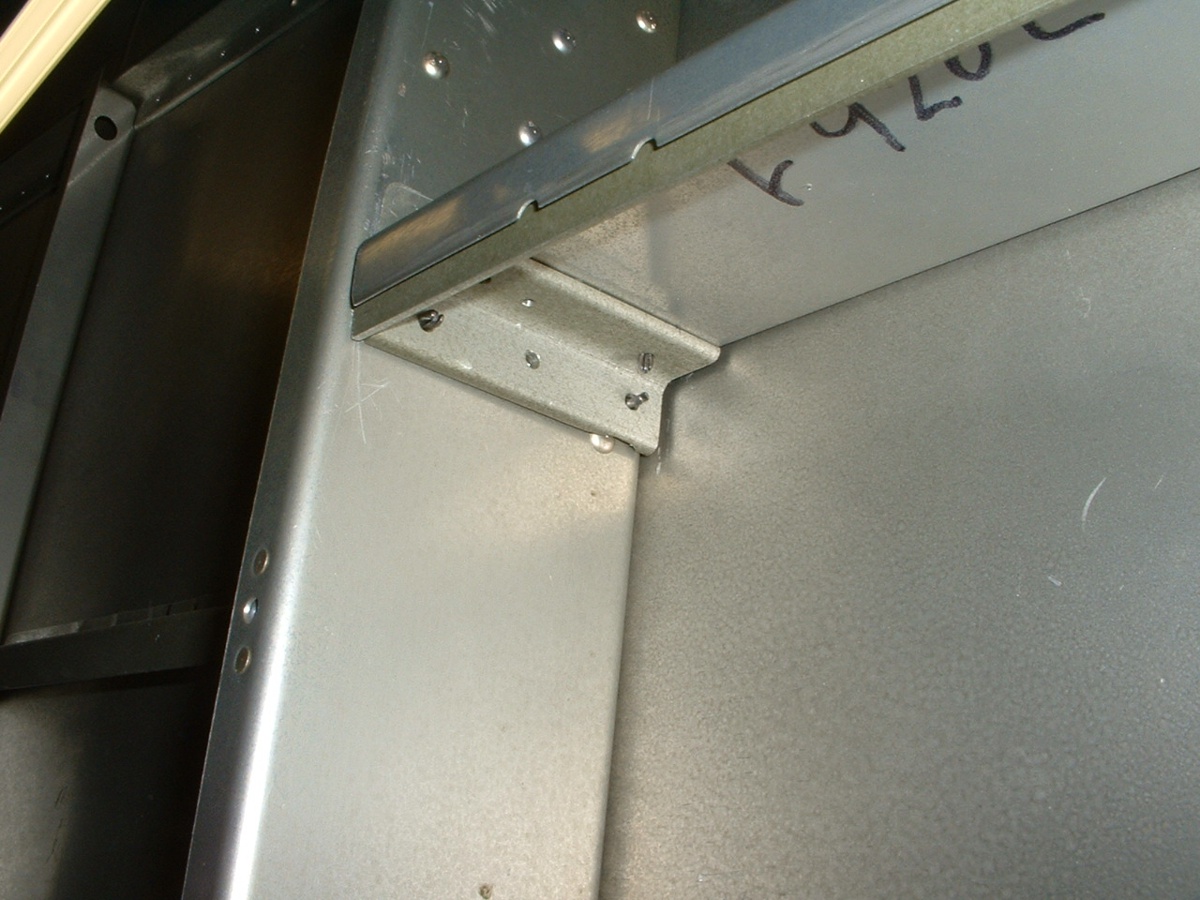 Here is the THIN front end of the armrest where I have used a shorter piece of the same heavy-duty angle to hold up the LONG angle.  This short piece will be blind-riveted to the bulkhead when the covers are ready to be secured for the last time.   I will be using TWO 1/8" thick Cherry Max pop rivets where the clecos are shown in this photo. 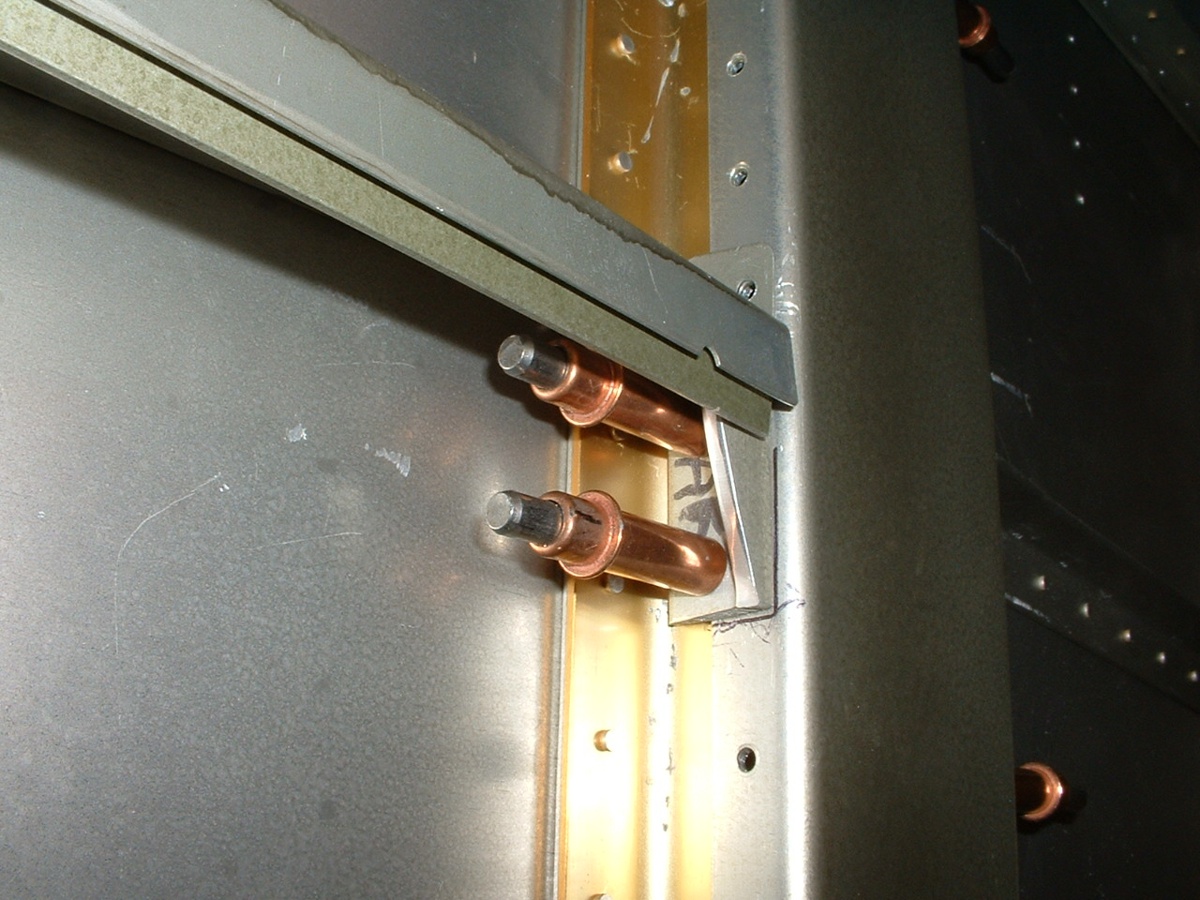