October 5, 2004:  I started on the engine monitor sensors and the other work around the engine.  Here are the two bundles of wires from the engine monitor threaded through two plastic bushings behind the monitor in the instrument panel.  I hope to start making those connections in my next working session.  For now, a lot of mechanical stuff must be done up front. 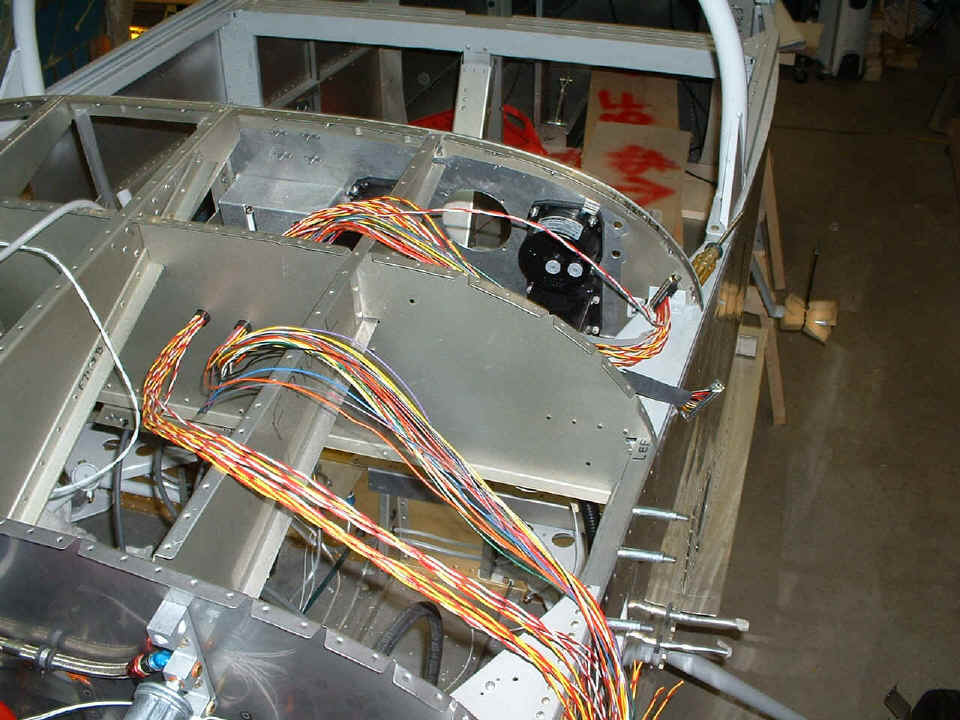 This photo shows the Vetterman Exhaust System mounted loosely to the engine and the spark plug wires from the magneto on the LEFT side of the engine.  After the two pipes from the cylinders on each side are welded together, a ball joint lets the exhaust pipes rotate down to the correct angle to exit the cowling perfectly below the fuselage.  The exhaust system is made of stainless steel pipes.  Those BLUE AN-fittings on the cylinder heads couple the oil return lines to the crank case from the rocker arms.  That gray wire coming from the green circuit board is the line from magnetic crank sensors that provide crank shaft positioning information to the solid state ignition firing the spark plugs on the top of all four cylinders. 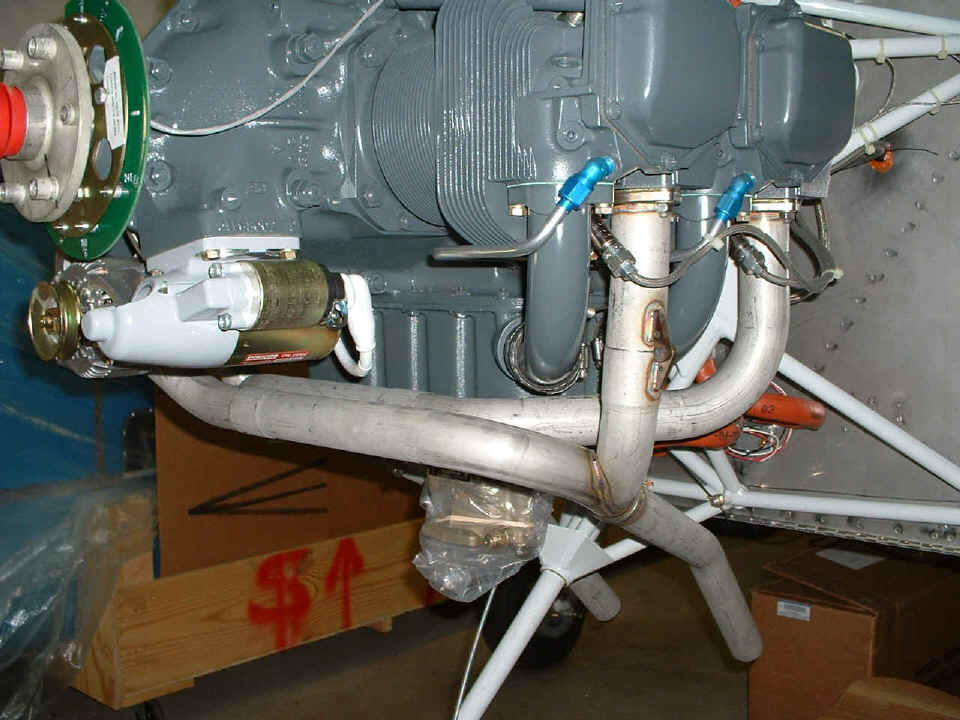 Same song, second verse: On the RIGHT side of the engine, the wiring from the alternator is now shown tywrapped to the starter power cable along with two smaller wires that run to the alternator.  One of those #18 wires powers the field current in the alternator.  The other wire is the warning light cable that powers that red light on automobile dashboards.  I learned that one in a call to Van's Aircraft earlier today for some tech support. 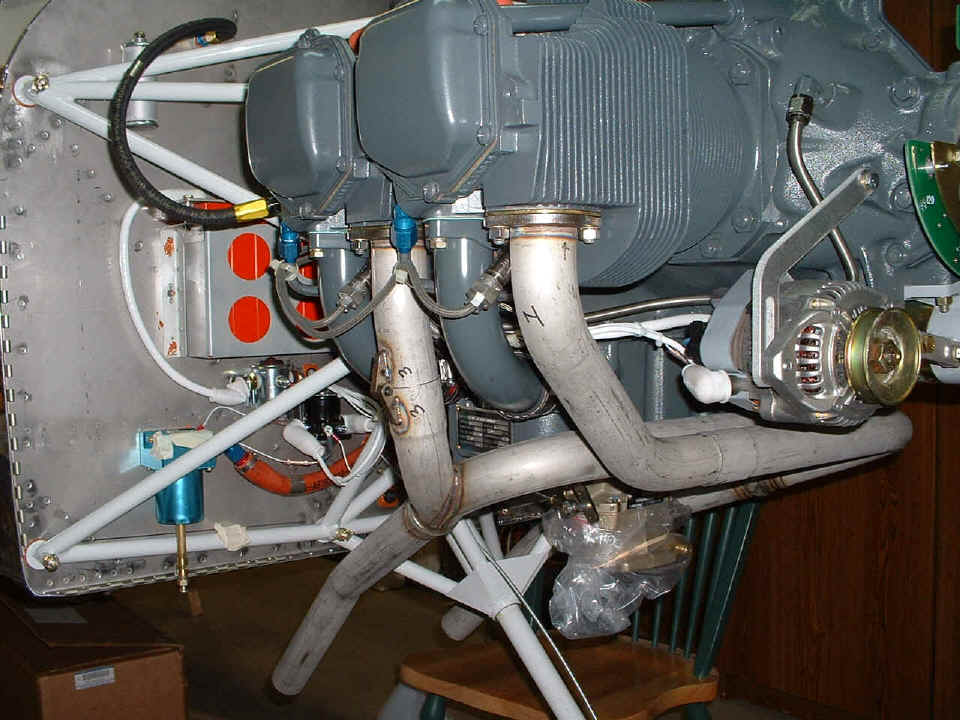 The last photo of the day is the securing of the wiring before making connections to the engine monitor harnesses shown up in the first picture at the top of this page.  By tomorrow night, this should all be a bit more crowded and some new holes will be in the firewall to bring those wires through going to and from the panel-mounted engine monitor. 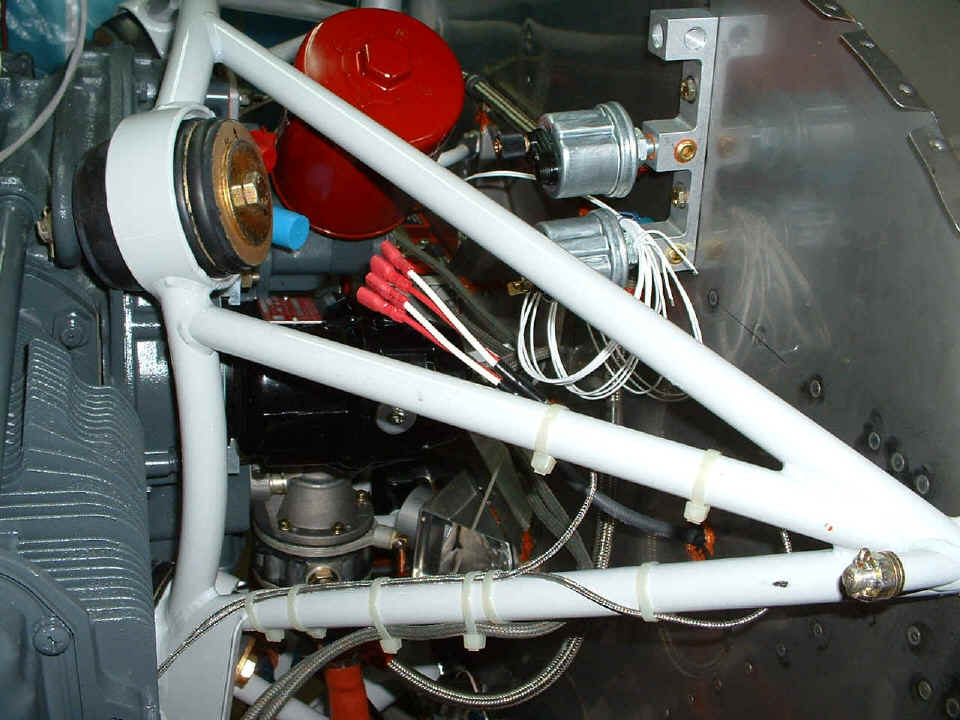 The other thing accomplished today was the installation of the fresh air scoop on the RIGHT side of the forward fuselage.  No need to see another picture about that since is it just a mirror image of the photo taken and shown yesterday on page 57.

October 6, 2004: Not much to show today.  I put the black air ducts inside from the air scoops to the "eye ball" vents on both sides of the fuselage and instrument panel.  I cleaned off the excess silicone RTV left over from riveting on the air scoops.  I then gave a lot of thought to the wires from the engine monitor and solid state ignition.  I put three new holes in the firewall for those wires, and of course, now I wish I had only made two holes.  I made the connections to the cylinder head temperature (CHT) probes to the matching wires from the engine monitor.  I figured out that three inches is the right distance from the exhaust ports to mount the exhaust gas temperature (EGT) probes.  I have not drilled the 1/8" holes for the probes just yet, but I know where they will go.   The RED & WHITE twisted pairs of wires go to the CHT probes.  The RED & YELLOW pairs of twisted wires will go to the EGT probes when they are installed.   The "other" wires coming out that hole will connect to and/or power the other sensors:  oil temp, oil pressure, fuel pressure, and fuel flow.  I also have a current probe to connect for amp-meter readings on battery charging. 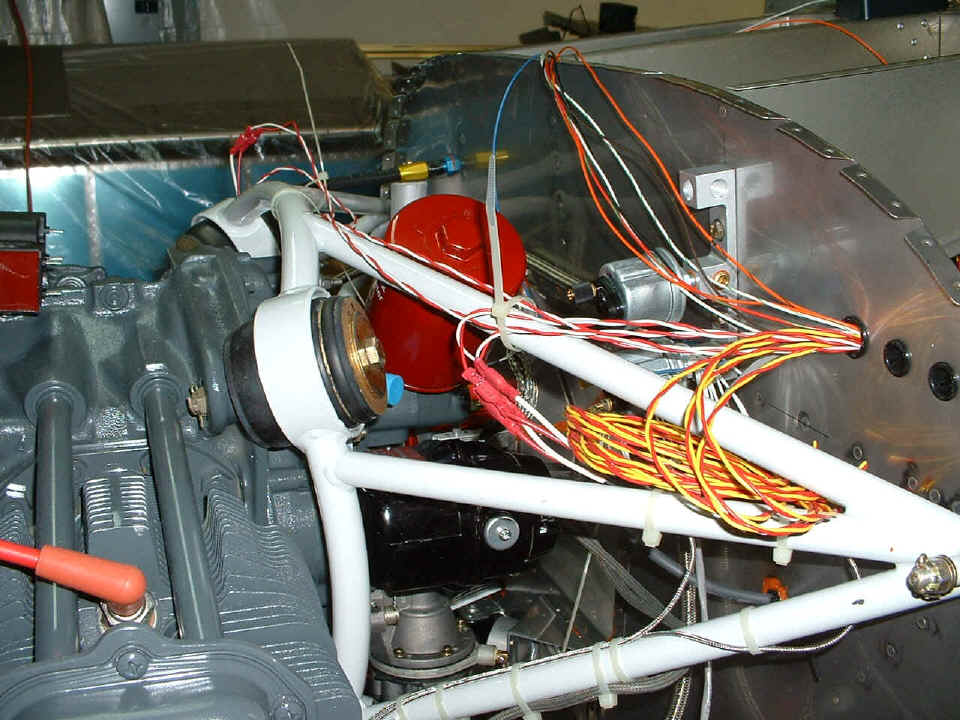 I talked with David Edgemon this evening about the sequence of tasks regarding the lower cowl fit with the propeller and back plate, etc.  I want to make sure the lower cowl is fitted properly before I do anything I might regret with the EGT probe placement.  David had a bad alternator and is putting on a new one this weekend and he could be flying his RV-9A by Sunday, October 10th.

October 7, 2004:  Another "light" day working on the airplane (1.7 hours).  Local RV-8 builder Larry Champion dropped by to see the current status instead of looking at this web site.  I reviewed many things with him that I am doing and we talked about the differences between RV-8 and RV-9 wings.  He is completing his second wing at this time and is preparing his fuselage jig to start on that kit next.  The fuselage kit was delivered a few months ago, but he has been too busy with his day job to get much done on it.

I ordered more parts today from Van's Aircraft and also from Aircraft Spruce & Specialty.  The Van's order had two notable items, the primer kit for the engine and the oil sump heater kit.  The other parts from Van's were some clamps and some wire terminals for #8 cable.  The order from "Spruce" had air fittings and Tygon tubing for the Pitot/Static instrument connections, plus four more panel-mount circuit breakers to complete that part of the electrical distribution to the various components.  I also researched a COM/NAV receiver to provide ILS capabilities.   I think I will hold off getting that stuff for a while.  $$$$$

You can see below the propeller is out of the box and up on a work table.   I spent some time reading the manual that came with it. 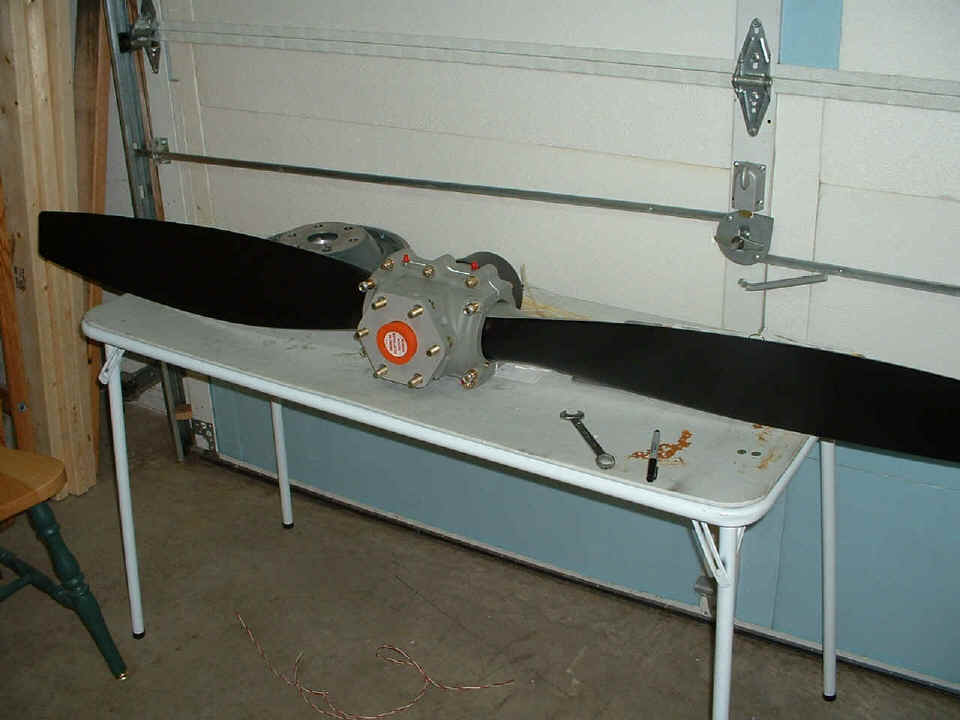 I pulled out the spinner back plate and doubler plate from Van's kit to get them ready for the prop installation.  The layout and drilling of all the rivet holes in both of them is completed. 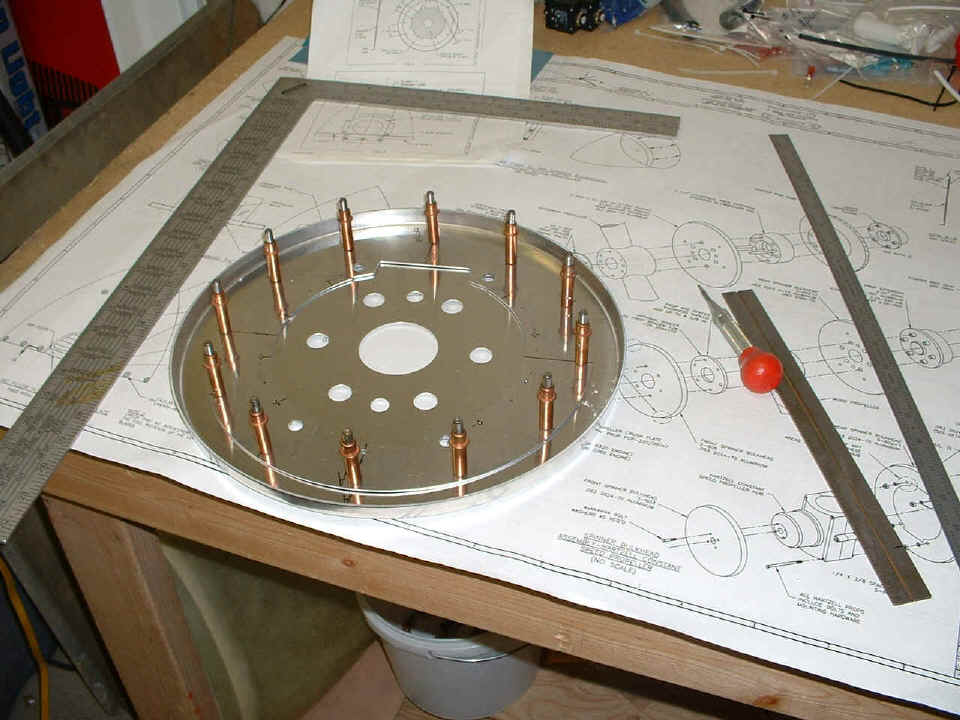 Tomorrow I will cut out the area of the back plate that is not used with constant speed propellers. 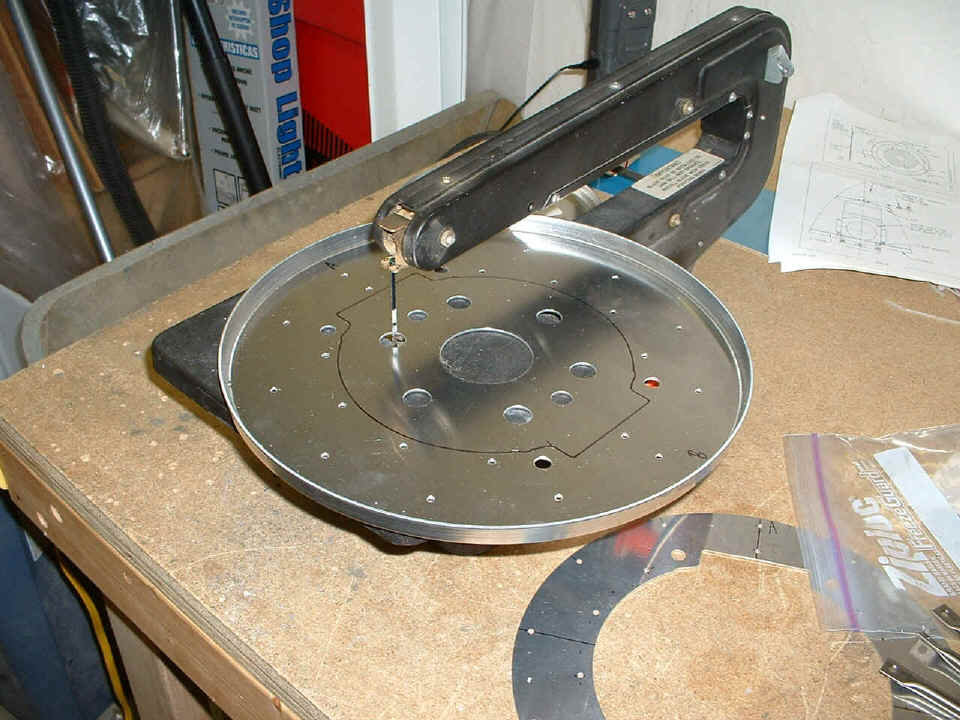 All that area inside the black line will be cut out, then deburred, and eventually riveted to the round doubler plate you see on the table beside the Dremel scroll saw.  I used this saw to cut out the large areas of the original control panel for the removable panels that I now use.  I was also talking with David Edgemon again tonight and realized I need to finish putting all the pieces of the exhaust system together.  Those parts at the very bottom right corner of this photo secure the pipes at the appropriate distance below the engine.  You will see more of them this weekend.  ALL of this work is just to get the lower cowl in place before continuing with more engine work (baffles).

Speaking of this weekend, the Collegedale Airport (3M3) will have an open house on Sunday, October 10th.  EAA chapter 150 is working to support the event and I will be there Sunday doing my bit as a volunteer.   I will take some pix and post them after the event.