November 25, 2004:  The first FIVE pictures on this page were taken during the first work session today.  The brakes are ready to fill with brake fluid, but not today.  This picture of the RIGHT main landing gear is looking AFT.  The brake line is on the front of the gear leg. 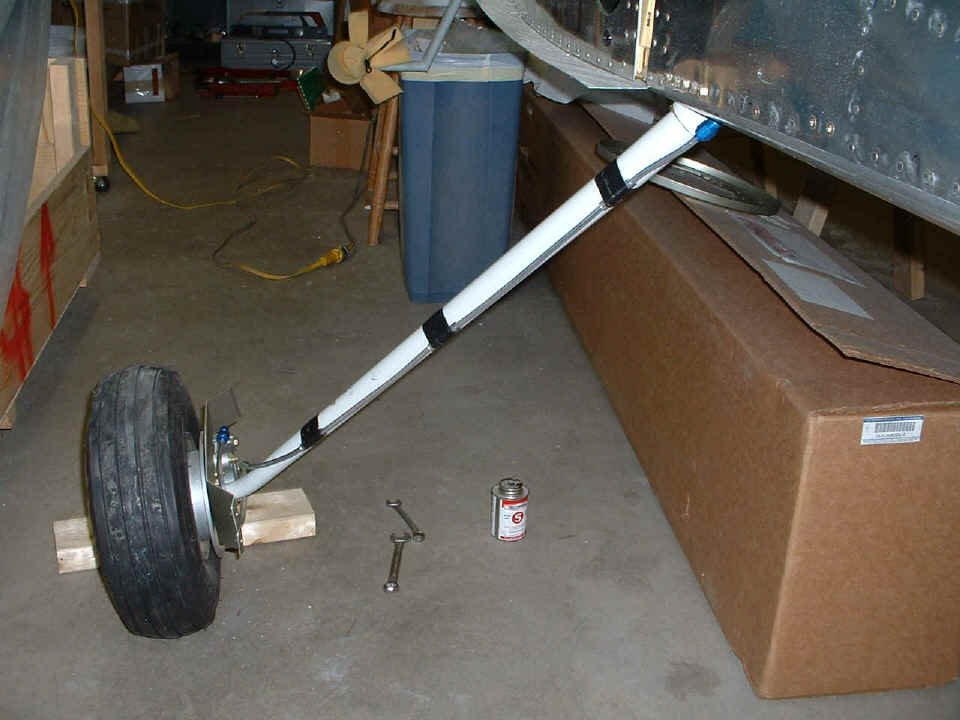 This close-up shot of the flaring tool shows the BEFORE condition of the 1/4" aluminum tubing used for the brake lines. 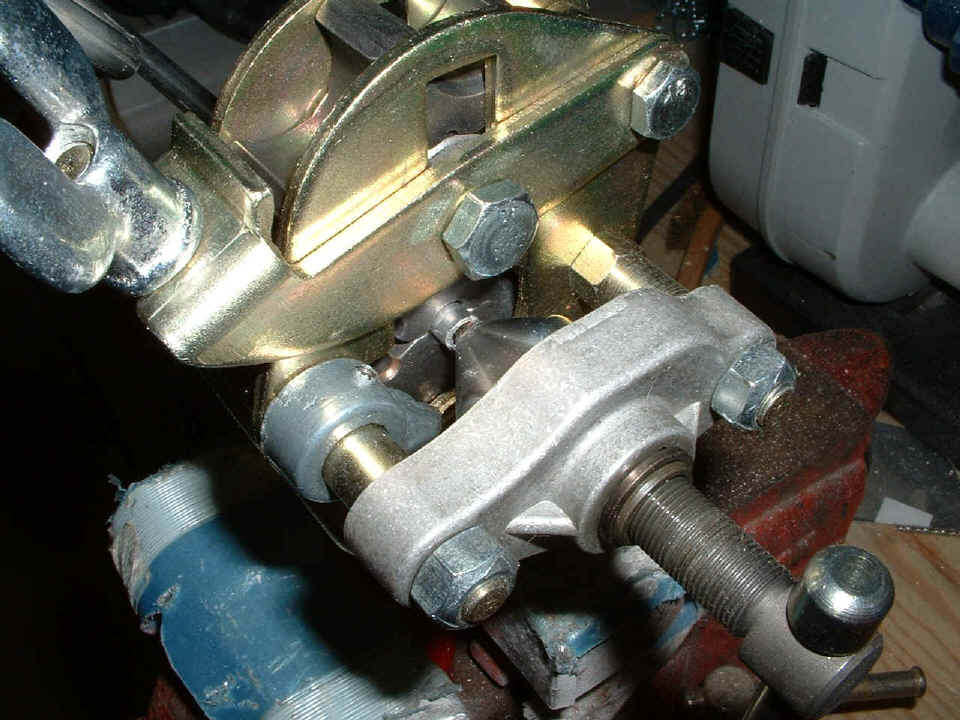 And here is the AFTER shot of that same brake line. 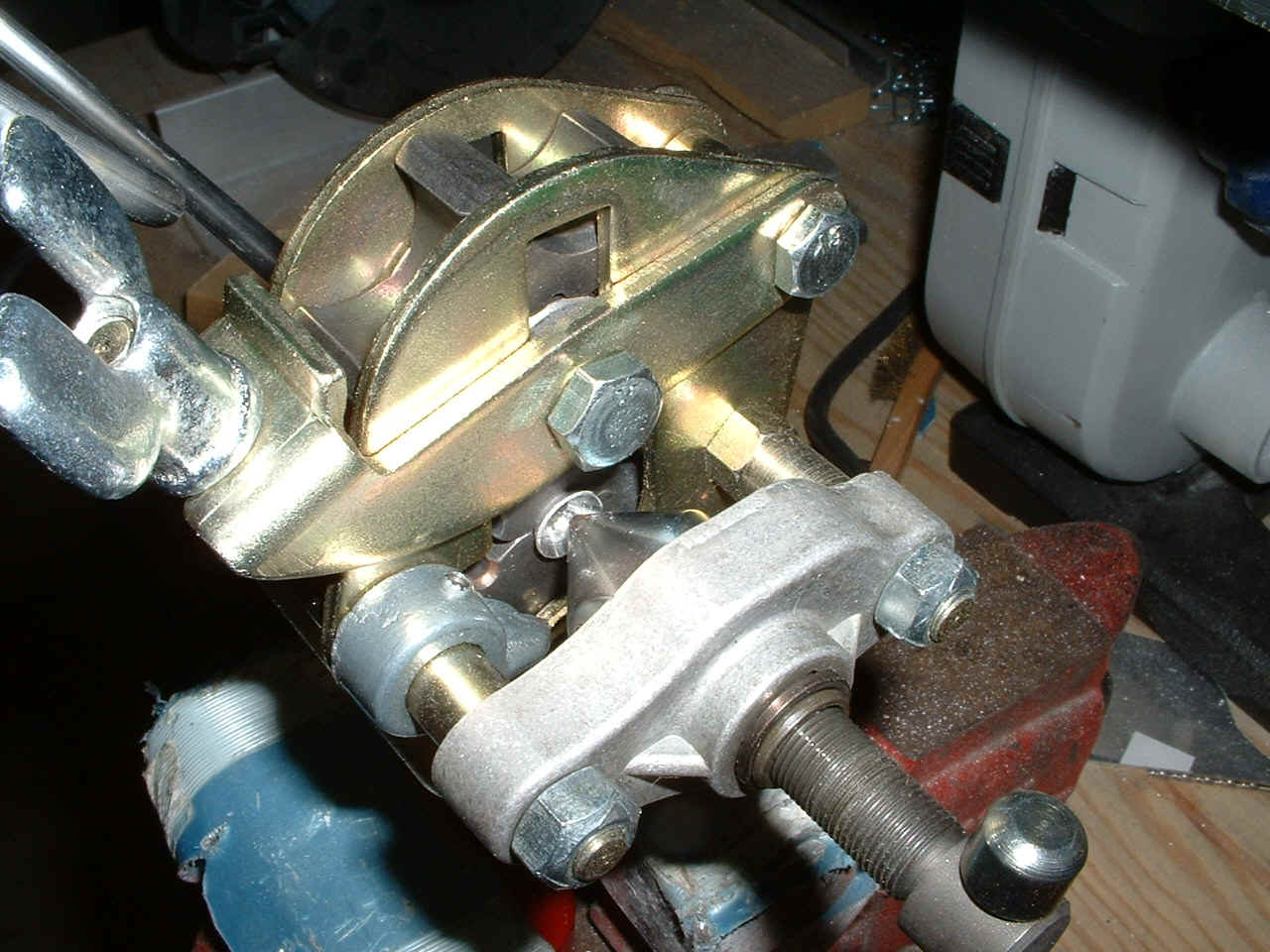 The final result of the flare on the LEFT brake line and the tool that I used to do it. 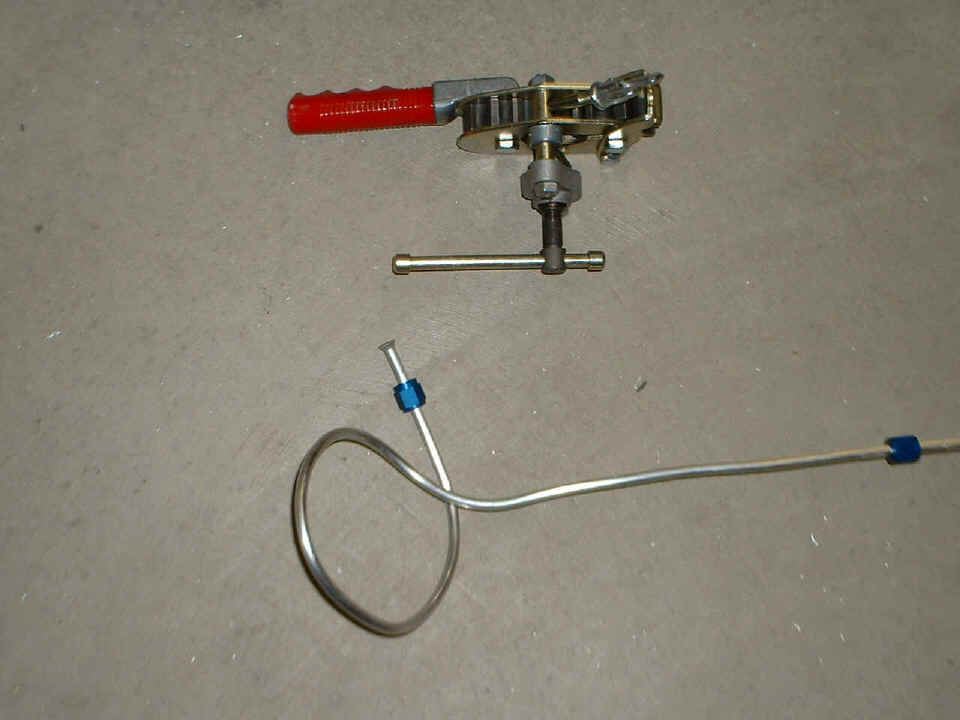 And here it is installed on the LEFT main landing gear.  This is the same way the tubing is curved on the other main landing gear shown at the top of the page.  There is a 1/4" plastic tube that has been split and placed around the aluminum tubing in three places on each gear leg.  The plastic tubing and the aluminum tube within are both held in place with black electrical tape just as Van's plans has instructed that it be done. 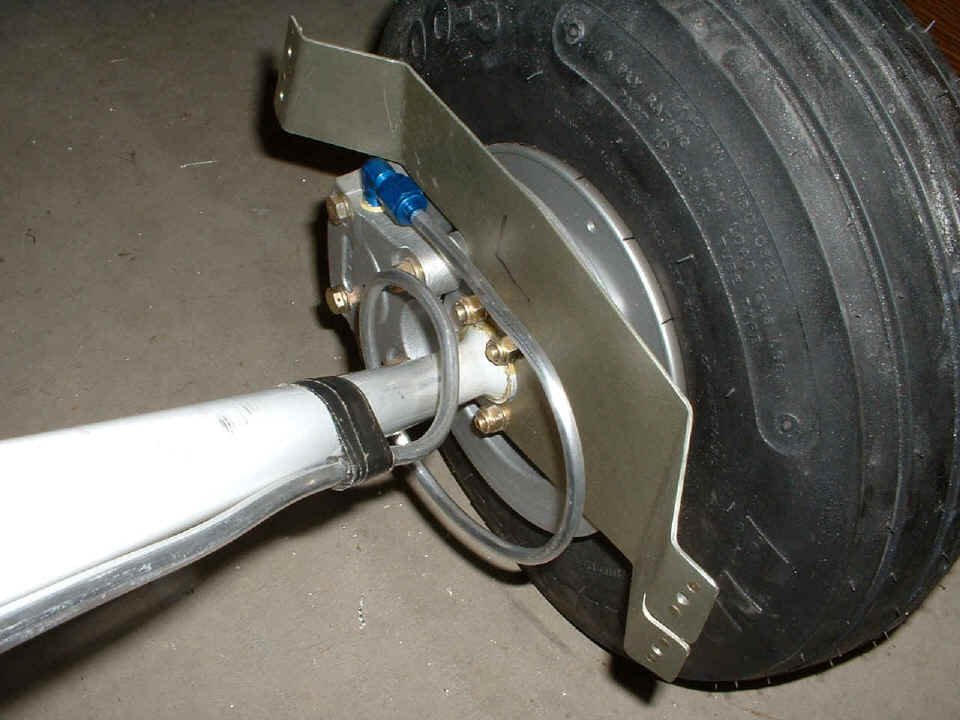 The other thing I did on the airplane project this evening was to fabricate and install this aluminum panel between the firewall and the bulkhead behind the main instrument panel.  I used a pair of 3/4" x 3/4" x 0.063" aluminum angles to support the panel.  The flat aluminum panel is screwed to the angles and the bulkhead allowing the panel to be removed for easier access when it is time to rivet on the forward top skin of the fuselage.  That black box with the white label on it is the altitude encoder.  Look at the picture below this one for more details. 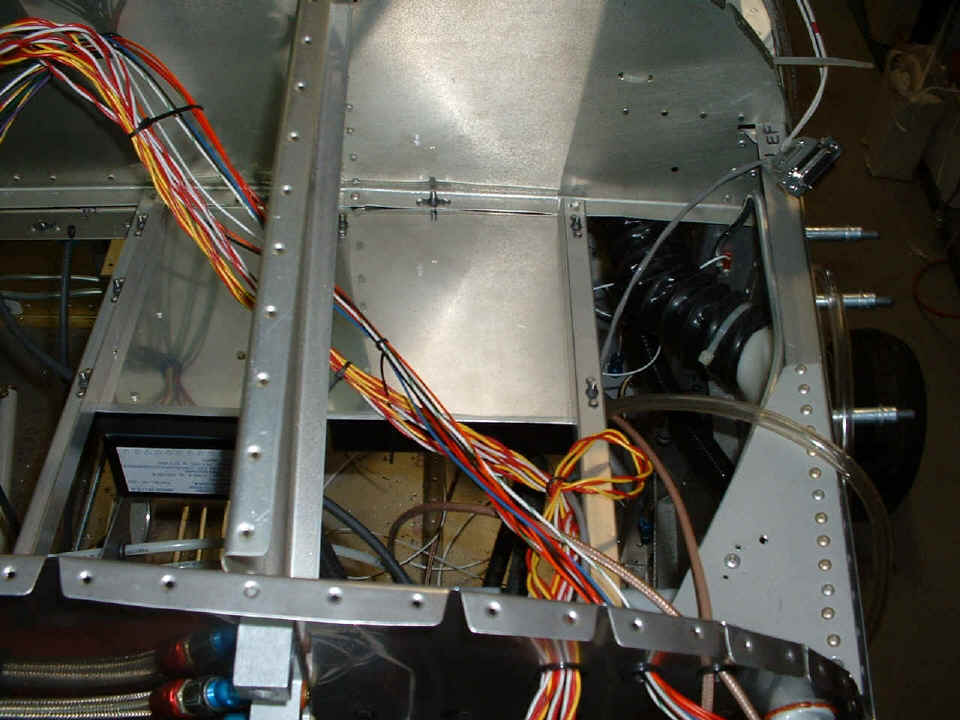 Looking up behind the instrument panel from the pilot seat bottom area shows everything mounted to the new panel.  The solid state ignition control module is the black box with the RED label on the left.  The front side of the altitude encoder is mounted further away from the camera on the blank "shiny" aluminum panel and the reflection of the encoder shows in the mirror surface of the aluminum panel.  Those two BNC connectors on the ignition control module are at a point where the cables that connect to them will pass in front of the altitude encoder.  That clear plastic line on the encoder will connect to the static port when the installation is completed.  There is a manifold pressure port (not shown) on the LEFT side of the ignition control module that needs to be connected soon.

The gray bar with the word LEFT written on it is one the rudder bars.  The two white nylon lines are brake lines between the LEFT and RIGHT master cylinders.   The two big BLACK "fuzzy" hoses are the flexible brake lines from the rudder pedals to the brake line connections on the firewall.  That big corrugated BLACK conduit running from LEFT to RIGHT is the main electrical conduit from the pilot's switch panel to the entry port on the firewall near the battery and the solenoids.   The two BEIGE cables will be connected to the BNC connectors when I have finished the connections to the ignition control module.

This was Thanksgiving Day, 2004.  I worked on the airplane in two shifts today.  I had a call from Maurice Garner in the afternoon to go flying with him in a Beechcraft "Skipper" model 77.  It is equivalent to a Piper Tomahawk, but built by Beech Aircraft as a trainer airplane.  Not much power, (Lycoming 0-235) but it flies (not too fast either).   It was fun since it was my first flight in anything NOT made by Cessna where I got to be PIC in the left seat.  The stalls were definite and easily recovered with almost no loss of altitude.  Just like the Tomahawk, the airplane yaws in turbulence. The landing is predictable.  No, I did not get any pictures of the particular airplane we flew today, but it looks similar to this one I found on the web. 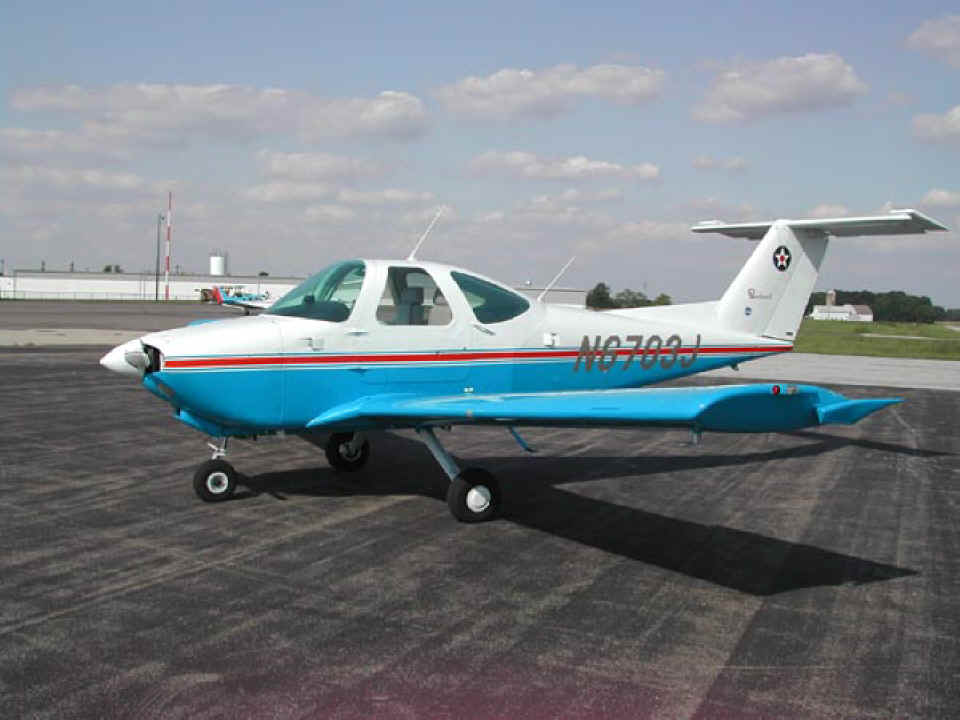 I did get these shots from the cockpit right seat as we left Crossville, TN heading back toward Chattanooga after dark.  I put the digital camera up against the windshield to minimize the flash bouncing back into the lens.   That white dot in the top center is the FULL MOON as we sat in takeoff position on runway 8 at Crossville.   The  "haze" in the upper half of the photo is the remaining flash reflection from the windshield. 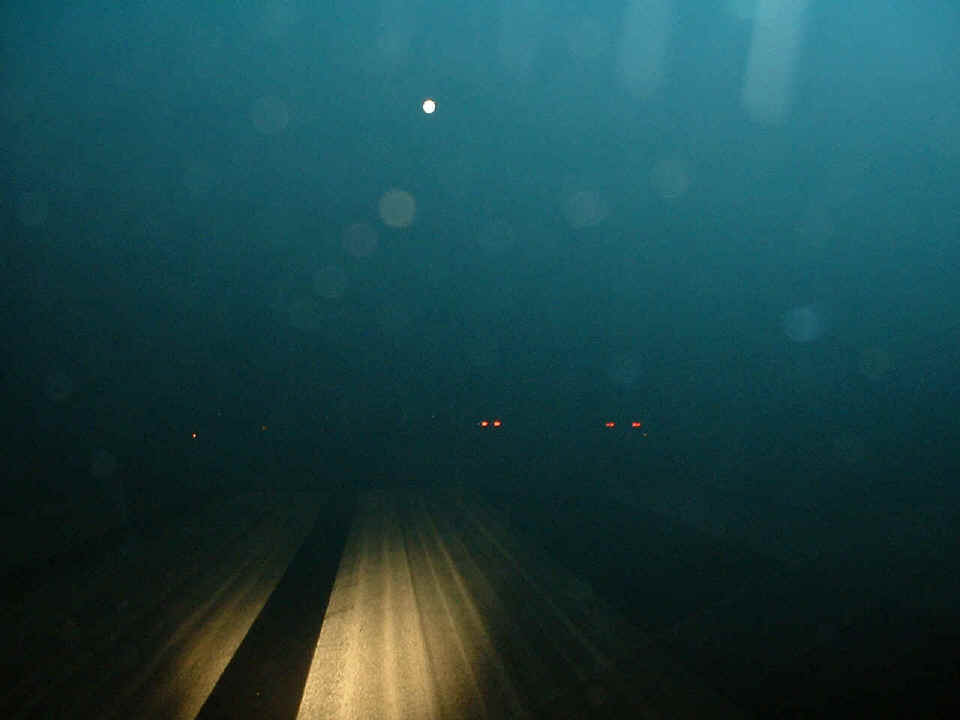 This shot is after takeoff with the FLASH turned OFF and it shows in the slow shutter speed smears of the street lights and the moon. 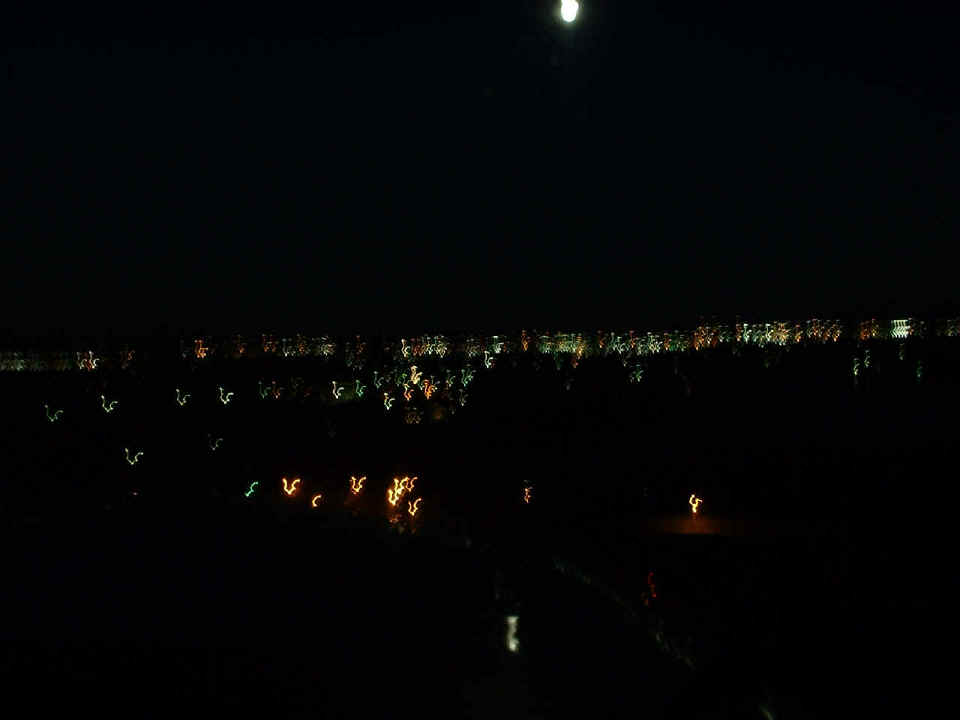 I turned the flash back on for this panel shot of the Skipper as seen from the right seat.  Maurice is flying at 70 knots on the initial climb at 500 feet per minute.  The field elevation at KCSV is 1880 feet MSL.  The altimeter shows 2560 feet as we climb out of the pattern at the East end of the field. 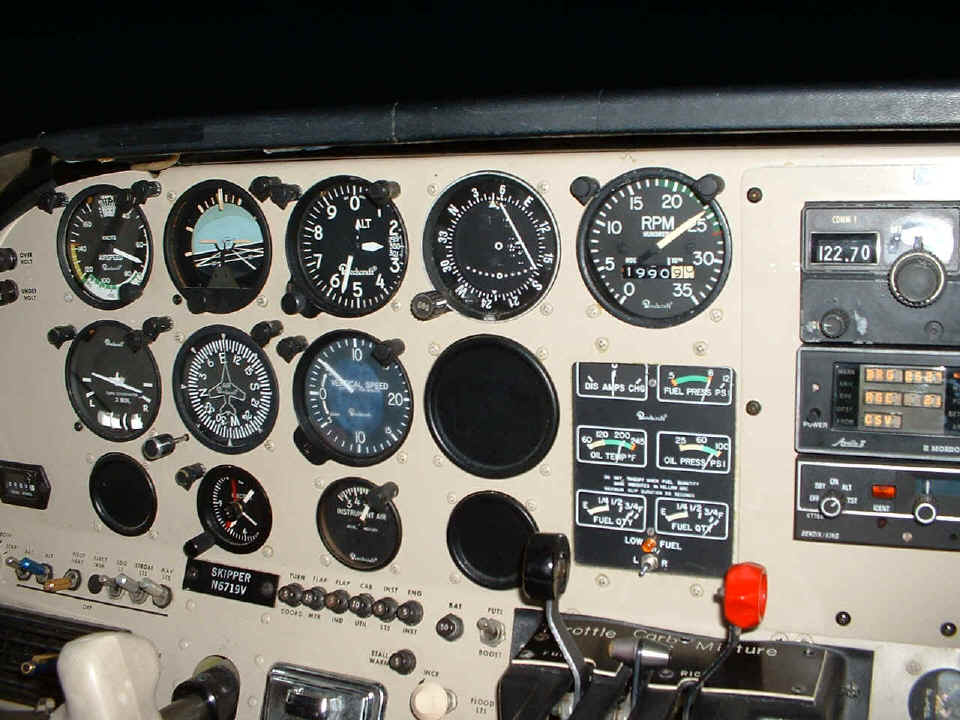