February 28, 2005:  Only three hours tonight, but some good things happened after I cleaned up more plexi dust with the broom and vacuum.  I cut the strip of air seal fabric needed to finish the front of the filtered air box (FAB) connection to the air inlet duct from the lower cowl.  I used the large head pop-rivets to attach the strip to the fiberglass box, then a couple of black tie wraps to lock the two sections of air seal fabric together.  The bottom edge of the new strip needed to be cut in two places to allow the needed flexibility for passage of the inlet duct as the cowl is put in place.  Before I made the cuts, I put the lower cowl in place and discovered it was too long on the bottom and wrinkled backward toward the FAB.  The cuts and removing some of the forward edge of the fabric at the bottom produced a good fit when the cowl is in position. 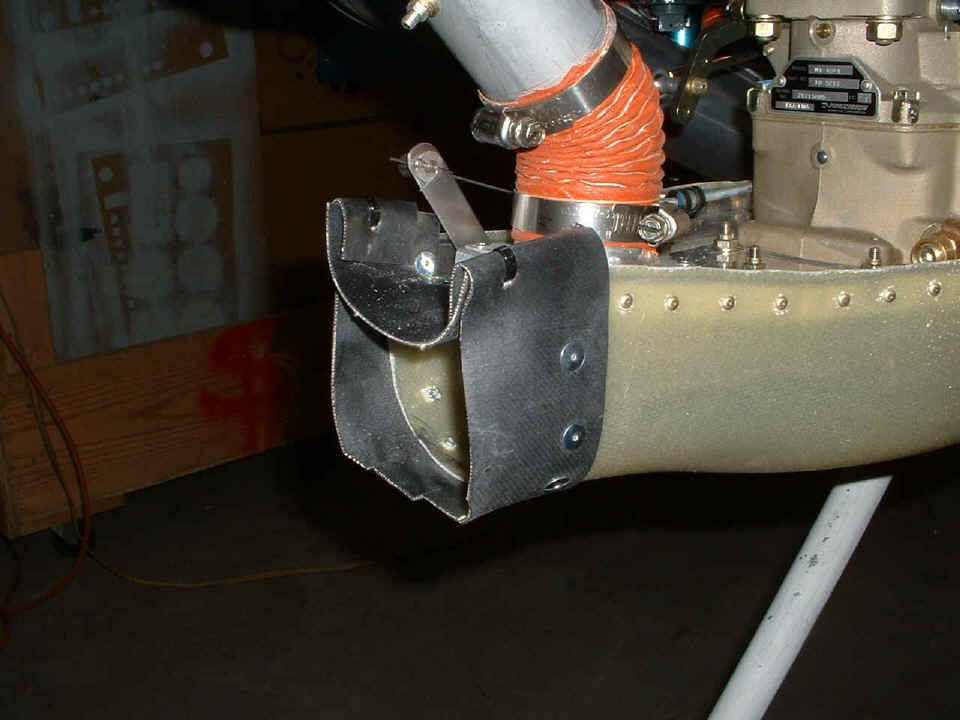 With the FAB now completed, the next thing to do is put the prop in place in preparation for the final changes to the lower cowl if needed.  It was time to clean up some issues I had identified over the past few weeks.  I trimmed a bit off both sides at the front of the engine baffles where the aluminum sheets holding the air seal fabric to the cowl interfered with the baffles.   I also put the starter power cable back on the starter motor.  The gray crank sensor cable also needed some anti-chafe treatment with some silicone tape at two places along its route past the engine.  One of those two locations is almost completely hidden behind the cylinder head oil drain tube in the lower right corner of this photo. 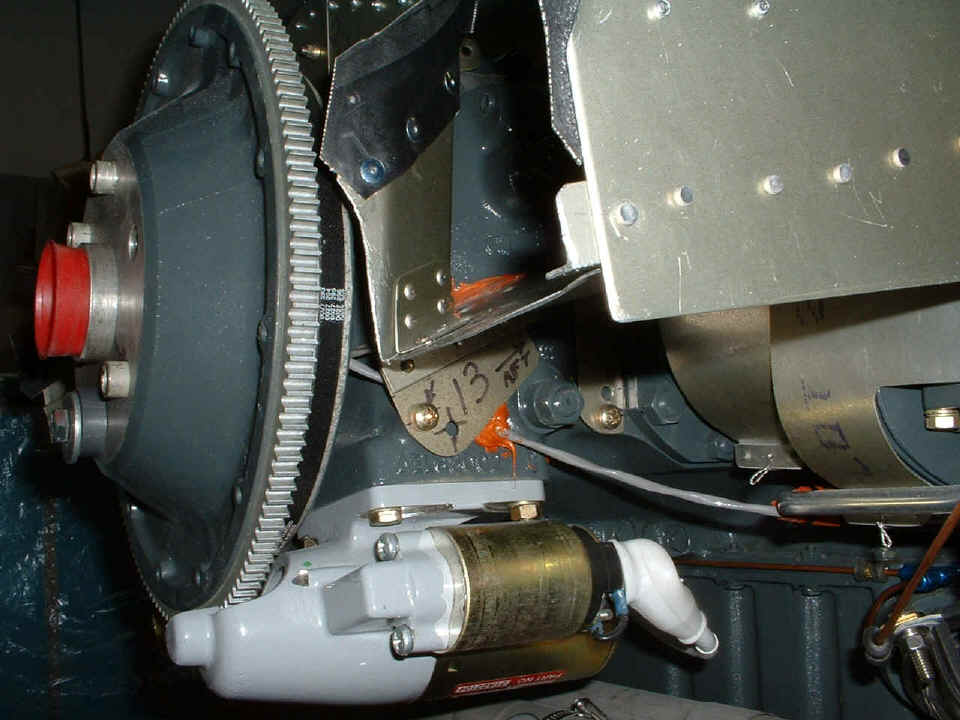 When the prop was installed, I tightened up the alternator in its proper position and started to work on the fiberglass spinner. 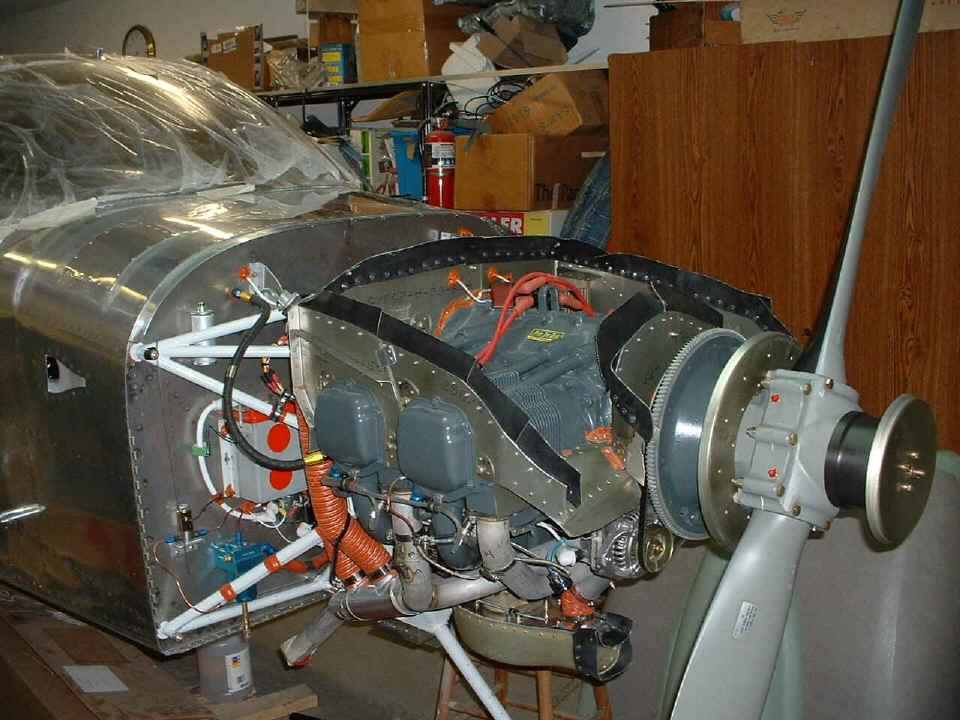 Here is the result of the preliminary fit of the spinner on the prop.   That handy piece of masking tape helps out when you need it.  I will need to twist the propeller blades by hand to determine how much more fiberglass must be removed from the spinner to clear the prop pitch angle changes.  For that I will need the help of a local RV-8 builder I know.  He has been wanting to come see the airplane, and now is the time I need him for a few minutes of assistance.  I will have to give him a call if he does not see this before I can call him. 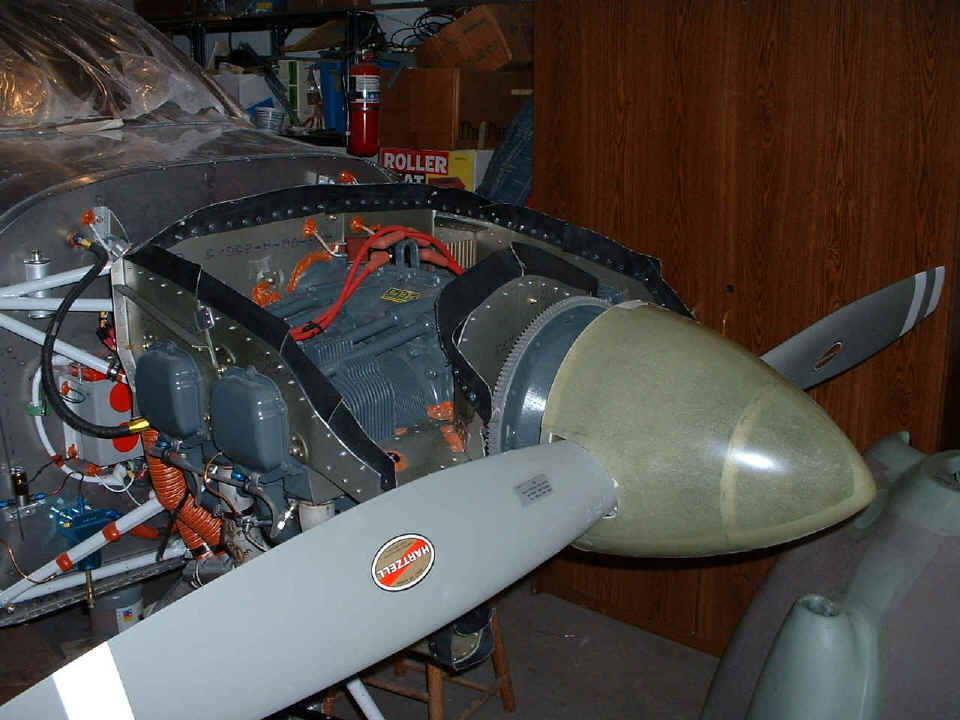 I ordered a few items from Spruce today for doing fiberglass work and to be sure I have some strong stainless steel 6-32 screws on hand for those access panels at the front and the two at the rear of the airplane, along with some for the radio baskets in the stack.

March 1, 2005:  A new month begins with a milestone moment.  This is the first fitting of the cowl and engine since I put on all the engine cooling baffles.  I found one baffle location at the front RIGHT side of the propeller that still needs a bit of trimming to ease the cowl installation.  I also had to extend the nose gear leg notch on the lower cowl about another half an inch toward the nose. 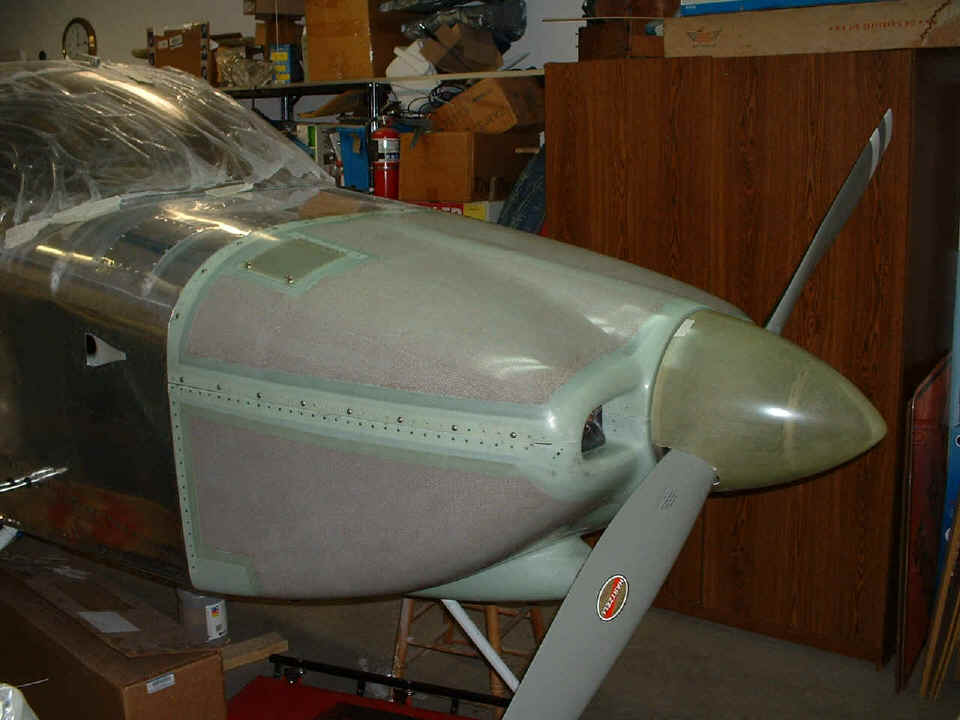 There is a bit of symbolic history in this photo that I noticed.  In the upper right corner of the photo is an old SIG Kadet radio-controlled model airplane box.   That was my first home-built airplane back in the winter of 1977-78 when I lived in Kissimmee, Florida.  Now this project is one that I can really enjoy and share with others.

(Enterprise theme written by Dianne Warren, performed by Russell Watson.)   You can see all the lyrics and hear the music on this page.

The last shot of the evening shows the first experiment with 3-inch letters for the aircraft name.  I will try different sizes as needed to get the placement of the retaining screws to fall in appropriate places, etc.  The two strings are about 3.5 inches apart on the cowl and represent the top and bottom limits of the central stripe down the side of the fuselage.  They come together approximately one inch apart near the tail.  The black letters from my laser printer will actually be white on the airplane.  And the spinner cone and the two spinner bulkheads have been match drilled for #8 screws.  In the next session, the platenuts get installed on the bulkheads.   I managed to twist the prop blades by hand to determine the maximum amount of the cone to remove for prop clearance with pitch changes in flight. 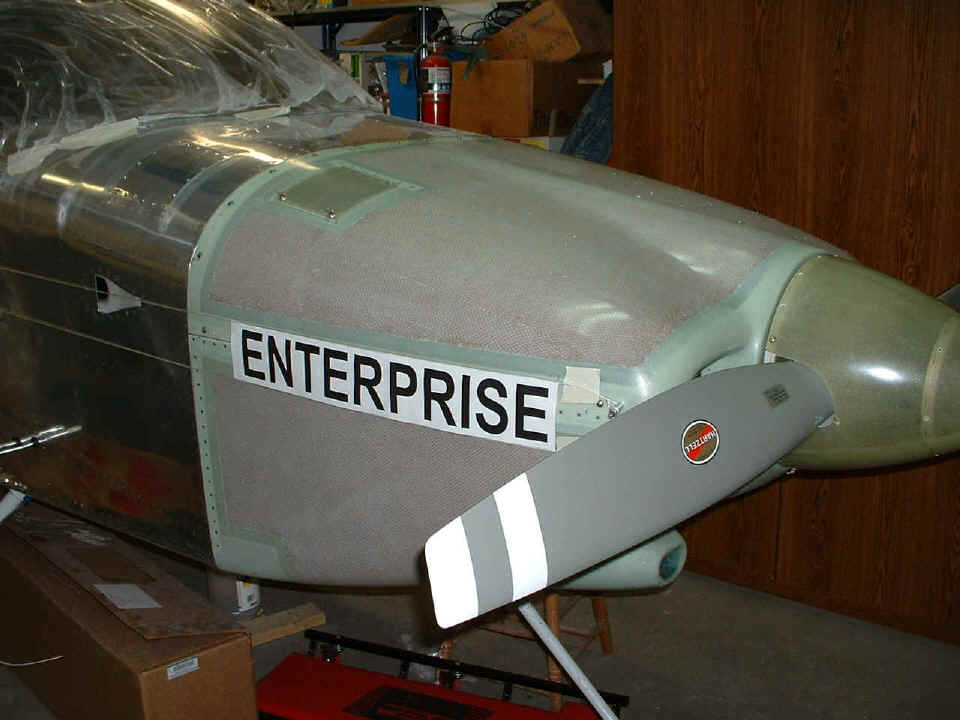 March 2, 2005:  A good day for working on the airplane in between responding to some emails and phone calls about my prospects for employment.  Let's talk about the airplane.  Today it was work on the spinner bulkheads and the fiberglass cone.  You can see in the photo above that I finished last night with the holes match-drilled through the fiberglass cone into the two spinner bulkheads.  I had to remove the propeller and both bulkheads to install the #8 platenuts for the mounting screws.  In the photo below, the spinner back plate bulkhead is drilled and countersinked at the rivet locations that hold the platenuts in place. 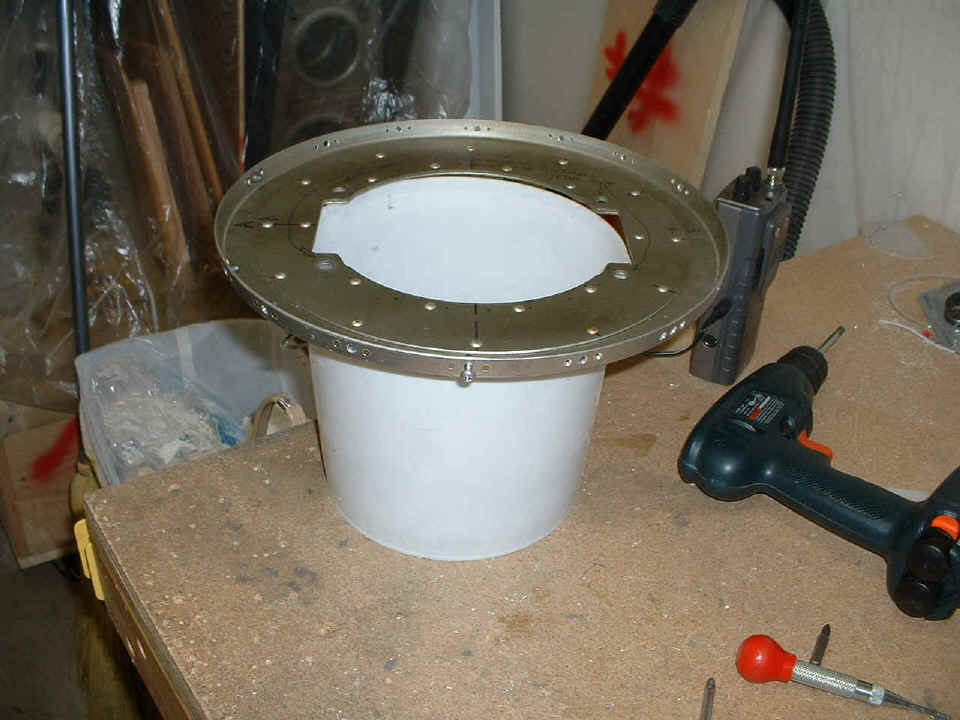 This close up shot should give some idea of the preparations for the platenut installation.  The center hole in each group of three holes was match-drilled when the fiberglass spinner cone was on the prop bulkheads. 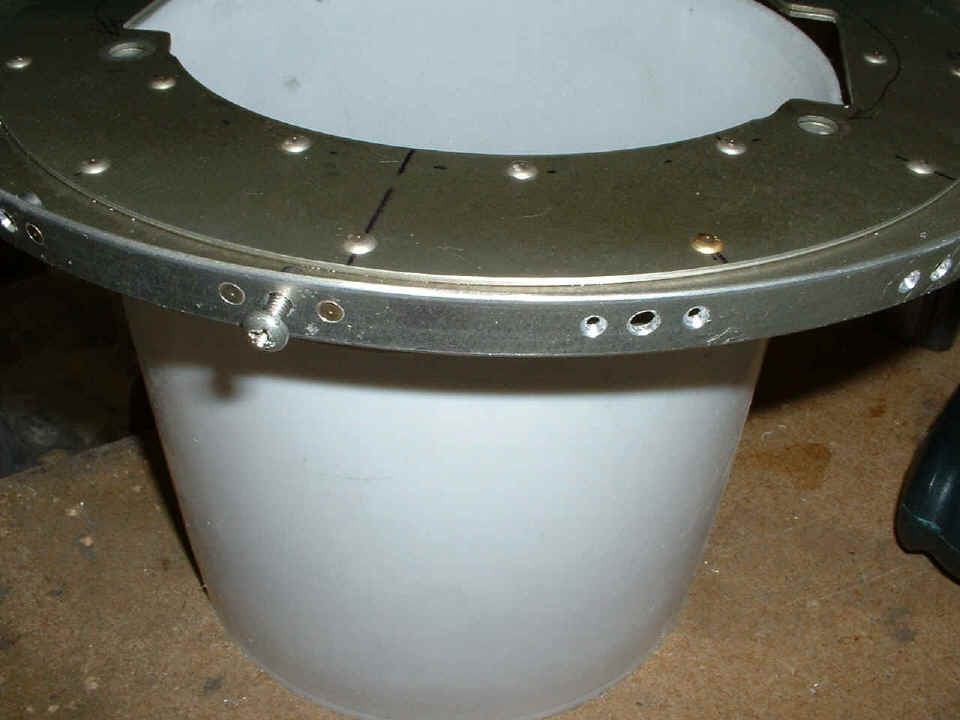 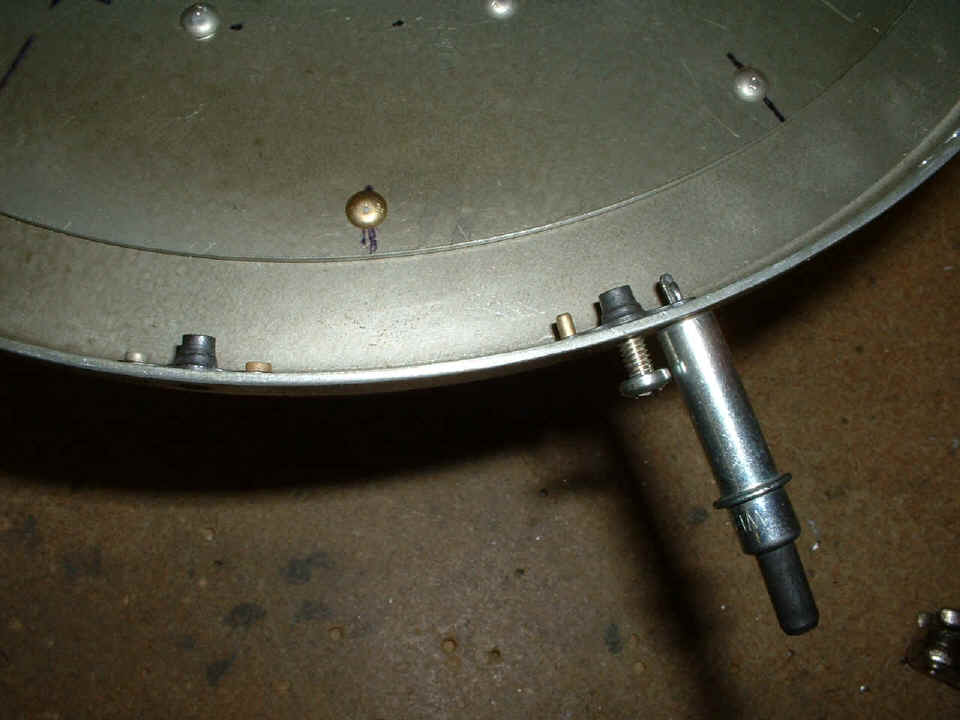 Since I have NINE pictures on this page, you will have to go to PAGE 99 to find out how this ends.