April 20, 2005:  The after lunch session got started and came to a short end when I realized I have no 3/32" drill bits remaining.   I started to drill the three screw holes to move one of my two eyeball lights to the other side of the cabin when I found the need for the lost (broken) drill bits.   The empty hole on the LEFT side will eventually be covered by the sidewall upholstry.  Add 0.5 hours to the log book for this day as I head out for more supplies and some groceries. 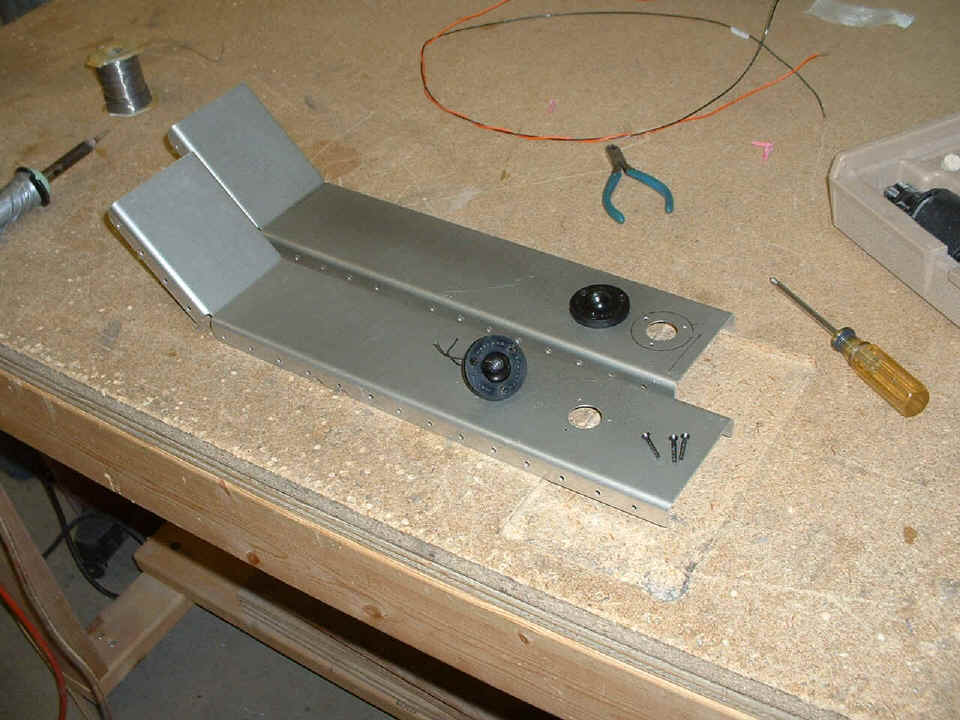 April 21, 2005:  I worked more on the commercial web project during the day, but I did get a chance to work on the airplane late in the day.  In a 1.9-hour session, I used the parts that came from Spruce to finish the wheel fairings.  I put the two screws in the VA-157B aft wheel fairing and the bolt into the axle platenut.  I then put the VA-157A front fairing on the aft fairing with the #6 screws and lined up the entire wheel fairing assembly with the parallel lines on the floor of the garage.  The two remaining screw holes in the side of the VA-157A were drilled to hold the entire assembly in the proper position.  The entire process was repeated on the LEFT main landing gear. 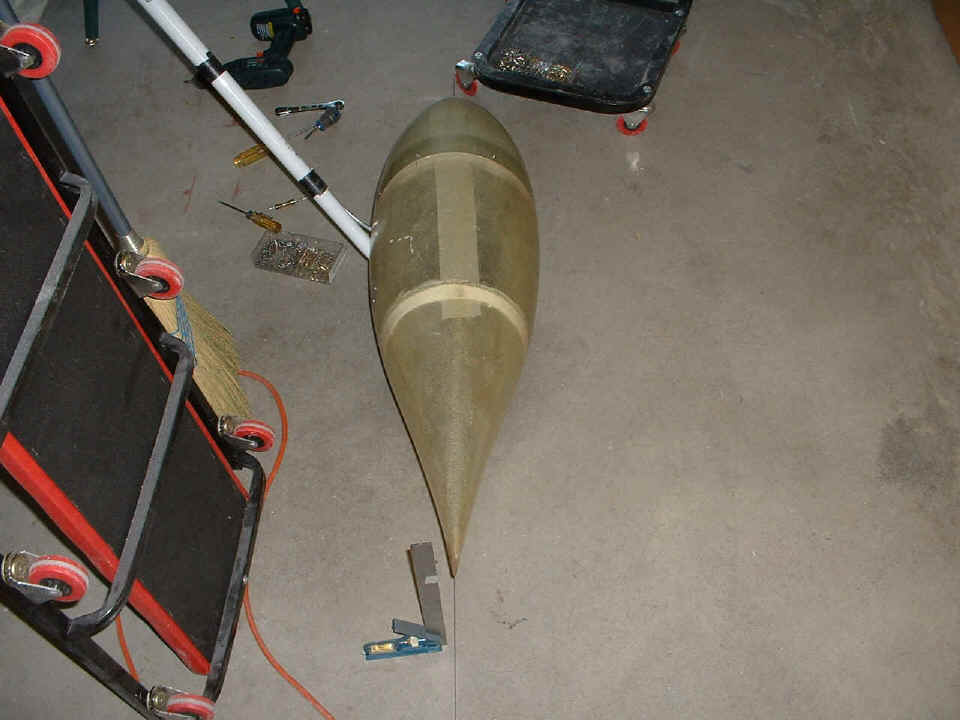 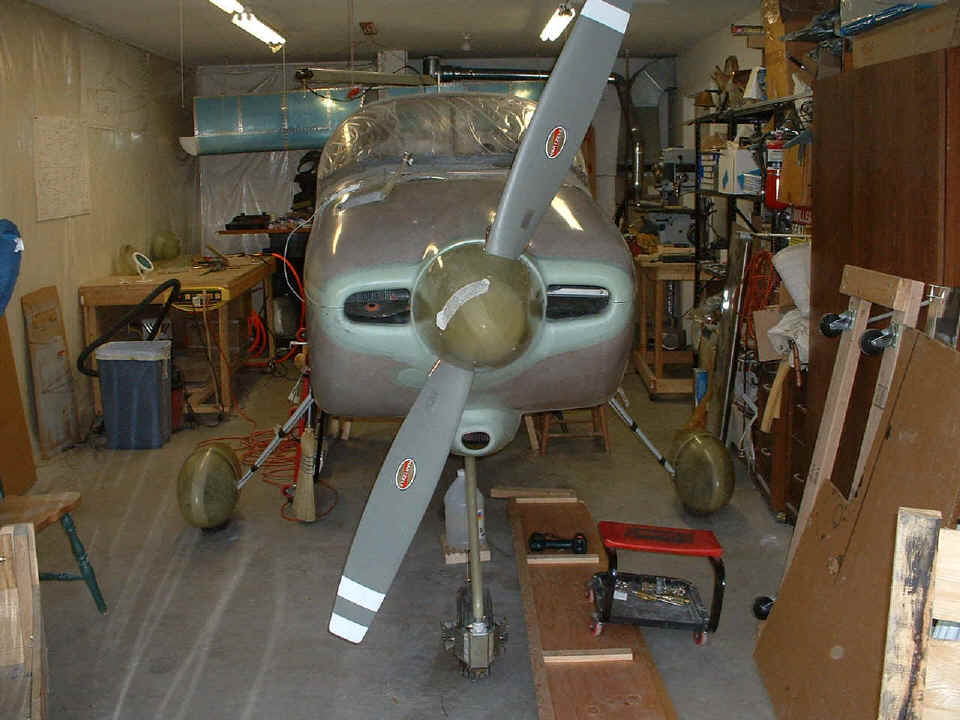 I am still waiting to hear from NationAir on my builder's risk insurance before taking the airplane to the Collegedale Airport (3M3) for final assembly and wiring in preparation for the airworthiness inspection.  The build time on the airplane stands at 1830.7 hours.

The Garmin GPS296 I ordered from Sporty's is on schedule for a home delivery by UPS tomorrow.  I should get a chance to play with it over the weekend.  If the weather is good, I may go flying.  There is a front coming, so that may have to wait.   I can always play with it in the car.

April 22, 2005:  Friday was a day for more work on the commercial web project for a few hours.  UPS came with the Garmin GPS 296 and you know what happened next!  I got out the unit and started to read about the differences and the similarities to my old GPS 196.  I finally turned it on and started to look at all the new features and think about exactly what changes I am going to make to the GPS data power cable wiring in the airplane.  I have decided to wire the new data power cable in parallel with the old one.  Why?  If I ever sell this airplane, I could remove my 296 and could offer compatibility to any Garmin GPS from the GPS III Pilot up to the most current models since both types of power plugs would be in the harness.

I did not do any work on the airplane, but I did upload all my user-defined waypoints and routes into the 296.  The 296 USB port made it all happen very fast.   I gathered up all my GPS 196 accessories and cables that are NOT compatible with the 296, put them into the original Garmin box, and will be shipping everything out to my son in Texas on Monday.  He is a 23-hour student pilot with the flying fever warming up inside him.  We talk about the day this summer when I will show up with the RV-9A at Georgetown (KGTU), Texas.

Comcast has been having trouble with a DNS server in the East Tennessee market.   It has brought my high-speed internet connection to a stop.  They had a similar problem not too long ago.  I had to use my dial-up service to log on to the Comcast web site just to complain about it.  The telephone repair line was also unusable and it sent me to a pager number when no human customer service person was available.  When I finally got to a working number, they had a taped message explaining the problem, and of course, there was no warm person to speak with.   Uploading the changes to this page went well since it is an FTP process, not needing the DNS server.  As I edit this page for changes, it appears the problem with their DNS server is resolved.

April 23, 2005:  I put in 2.2 hours today on the project.  I also had a local pilot visitor again, Wendell Folks, for his second visit.  Wendell just got back from Sun-N-Fun and has the "RV fever" a bit stronger than before.  He was talking about the decision to build a plain kit or get a quick build kit.  I removed the main gear fairings and took off the cowl while he was here.  I needed to beef up the VA-157A forward sections of the main wheel fairings in the area where the two #8 screws hold them in position.  I took off the cowl to sand a rivet epoxy repair on the bottom of the cowl, and to show Wendell the cabin heat muff on the exhaust pipe. 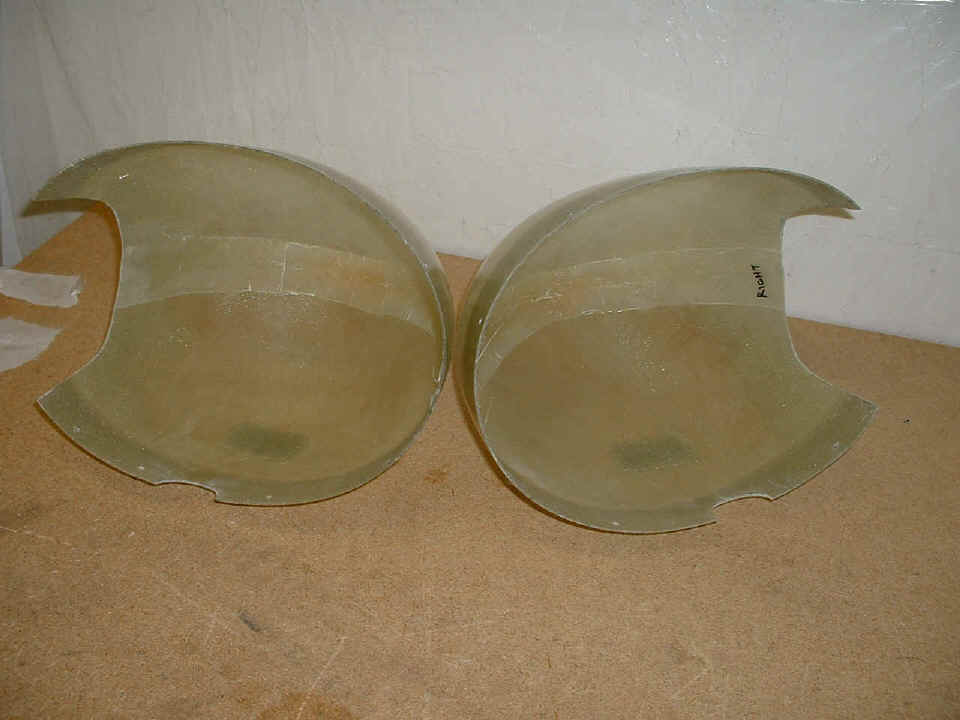 The main wheel fairings will remain off to allow hard points for securing the airplane to the flat-bed of the tow truck. 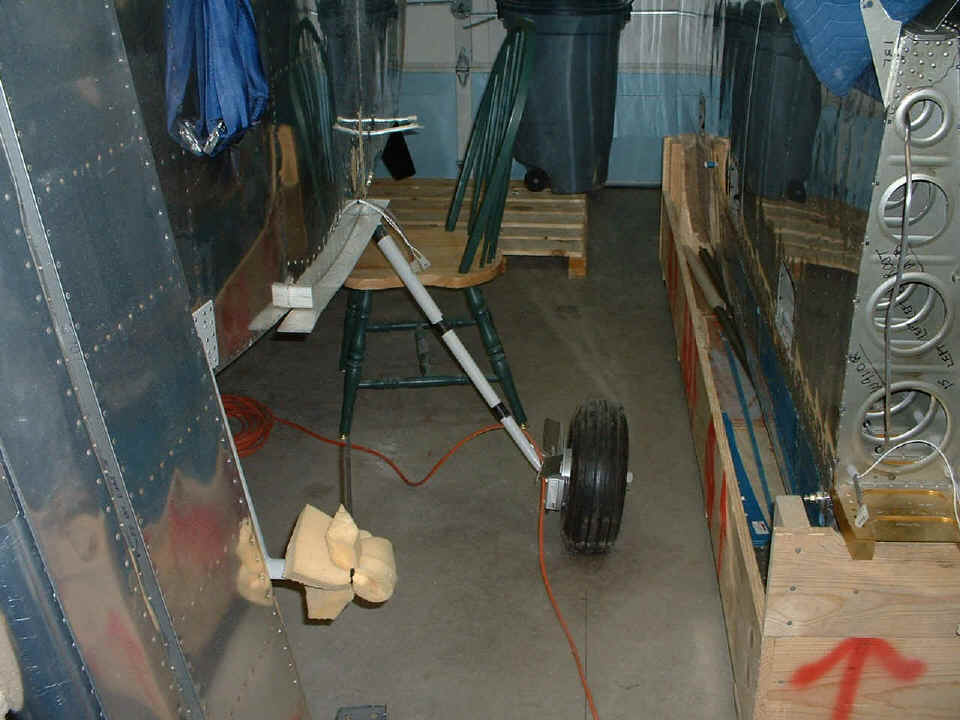 I put the cowl back in position and secured it with all the screws for the trip to the airport.  I also removed the nose gear leg fairing to avoid any possible damage during transport to the airport.  This is to allow another hard point to tie the airplane to the tow truck bed. 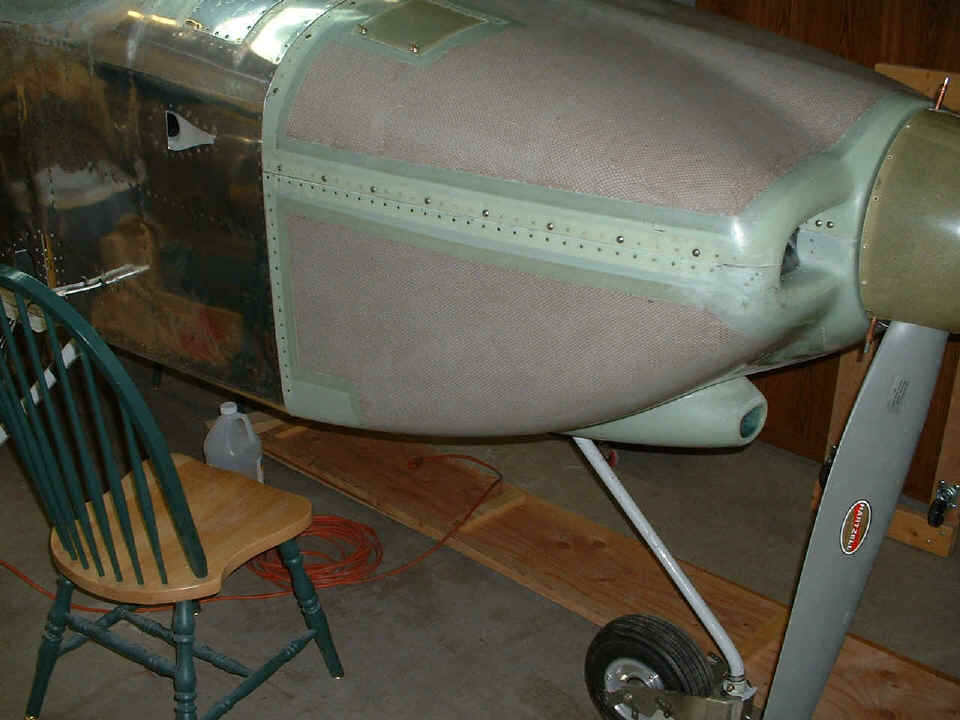 Comcast had more troubles with DNS later in the day.  It seems to be OK right now as I post this around 10:30 PM on Saturday night.  Tomorrow, I get to work on the wiring for the GPS 296 and some light wiring.  I could also get started on the first application of the epoxy filler on the windshield fiberglass layers.

April 24, 2005:  Two short sessions today totalled 2.7 hours.  I went out to the airplane and thought about doing the wiring changes I talked about yesterday, then realized when I screwed the cowl on for the trip to the airport, I had left the battery ground cable connected.   I pulled it apart, then thought to myself, "I need to put the oil sump heater strips on the bottom of the engine".  I figured out the best flat places to attach the strips, then realized I needed to pull off the carb and filtered air box to get this done.  The paint had to be removed from the sump in the area where the heat strips are to be epoxied into position.  A special silver epoxy was provided with the units for this job.  There is a third location stripped of paint to accept the thermostat sensor that controls the heat strips. 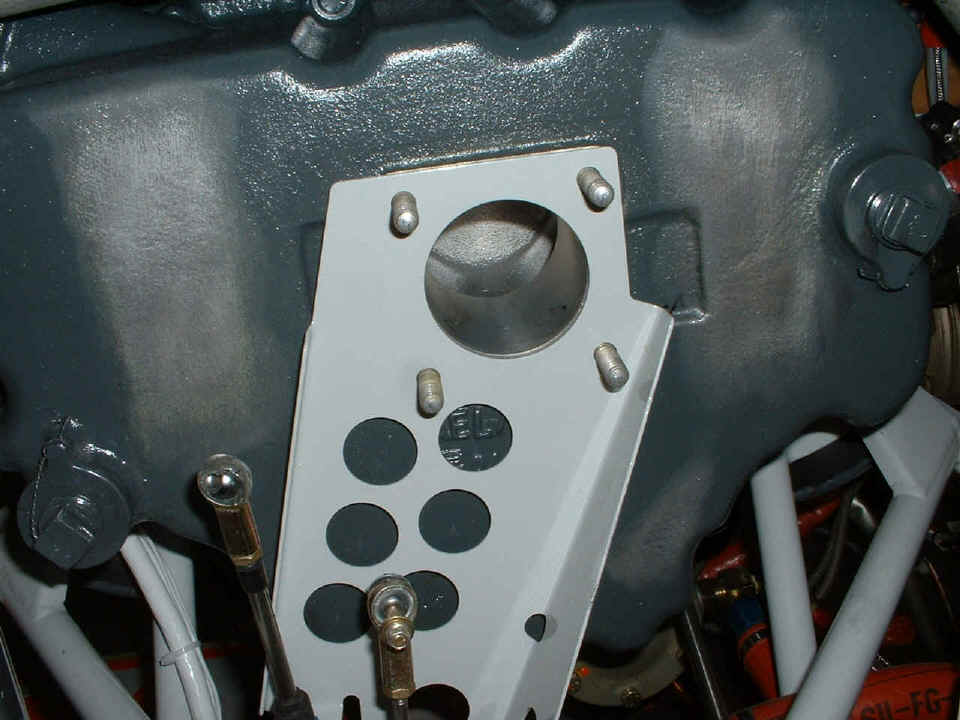 The second photo for today shows the strips taped into position to allow the epoxy to set.  After the epoxy is fully cured, the tape comes off and more epoxy goes around the edges of the heat strips and at the wire entry point into the metal heat strip covers. 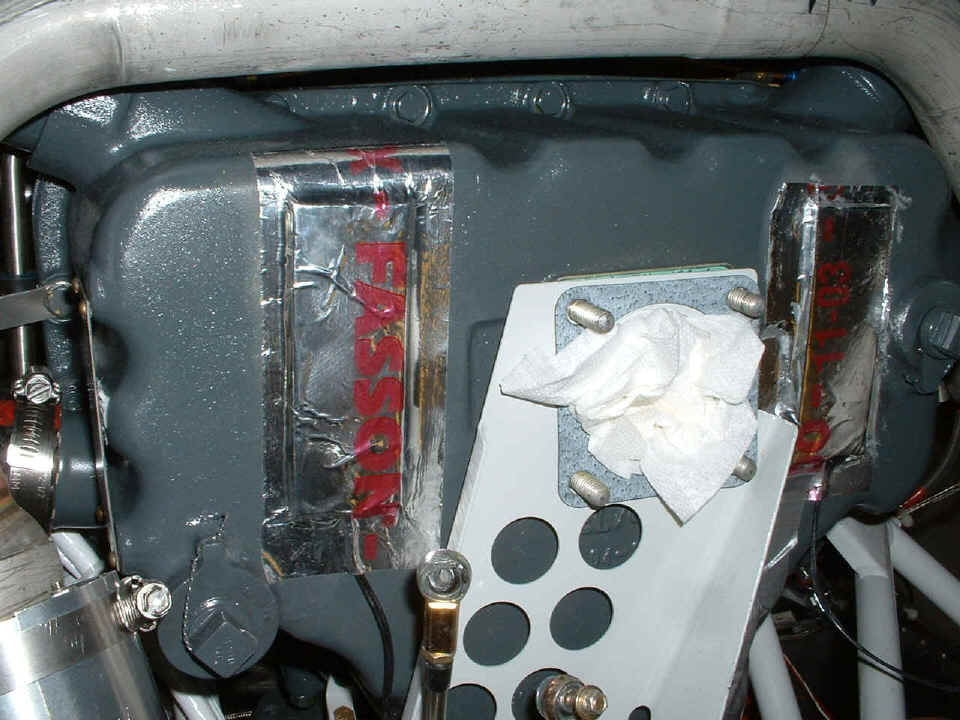 The carb and filtered air box are sitting on my work table until all this is finished.  I just thought I was ready to go to the airport.  I still have to hear from NationAir about my builder's coverage before anything leaves the garage on the tow truck.

April 25, 2005:  More work on the commercial web catalog project today.  The insurance quotes from NationAir arrived via email this morning.  I went by the UPS center to ship the GPS 196 and all accessories to my son in Texas.  I continued to the airport to visit with Rich Nadig and fill in some information on my airworthiness application to the FAA.  I tried to contact local RV-8 builder Larry Champion since I passed close to his home, but to no avail.  I created a spreadsheet to compare the insurance quotes, and settled on a plan.  I will call NationAir tomorrow to get things moving, and that will let me get the airplane moving soon.  I plugged in the heat strips for five minutes at a time on two occasions this evening to help cure the epoxy bonds a little quicker.  Since there is no oil in the engine, I did not want to leave them plugged in very long.  I spoke with David Edgemon about a possible visit by him to the hangar at Collegedale on May 8th.  I should be there a few days before that with the airplane.