April 27, 2005:  Inside the hangar at last.   The unloading from the tow truck was the reverse of the process at home.  Chris came down from the office of Aviation Specialists to see the airplane up close.  He has been following my progress online, but remarked about the big difference in seeing the real thing up close with his own eyes.  Aviation Specialists is the flight school where I have been renting Cessna 172's for the past few years.  I have some money in my flight account and will fly that off soon before heading to Scappoose, Oregon for my transition training. 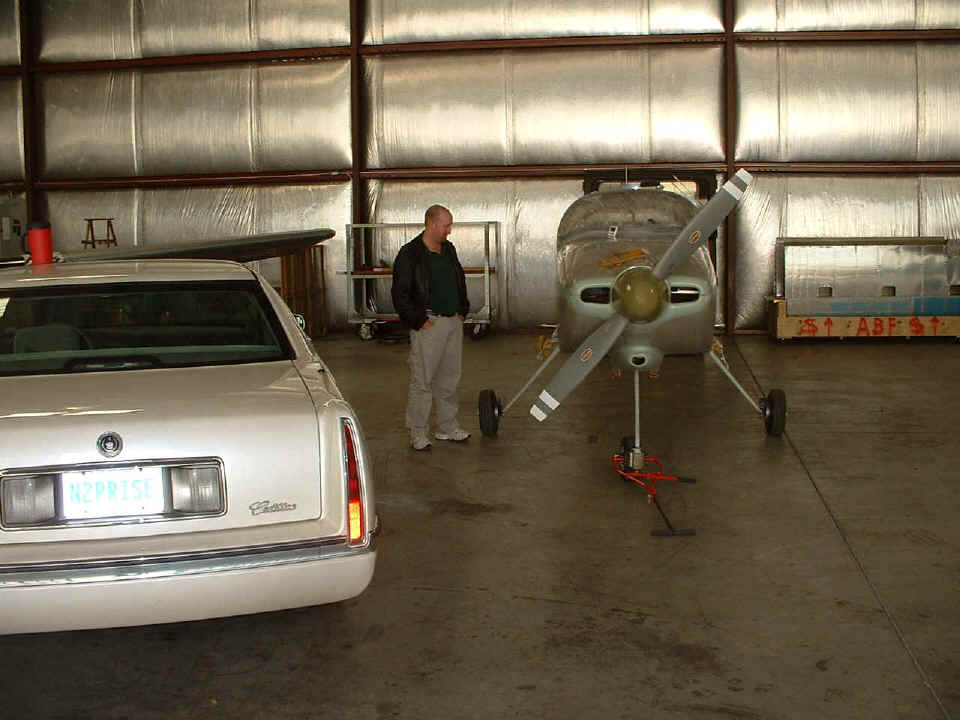 I guess you can see that N2PRISE has been on my car for a lot longer than I have had this web site address.  My first N2PRISE license plate was on my 95 Park Avenue when I lived in Florida.  The reflection wiped out the "Tennessee" on this plate.  There is the famous RED CUP with ice water in it as usual (never coffee or anything else).

Time to get to work, with both stabilizers getting bolted to the fuselage.   The parts bin and the upper section of my shop tool box are visible sitting on a WWII olive drab tractor tug that goes with an AT6 parked next to my shiny new airplane. 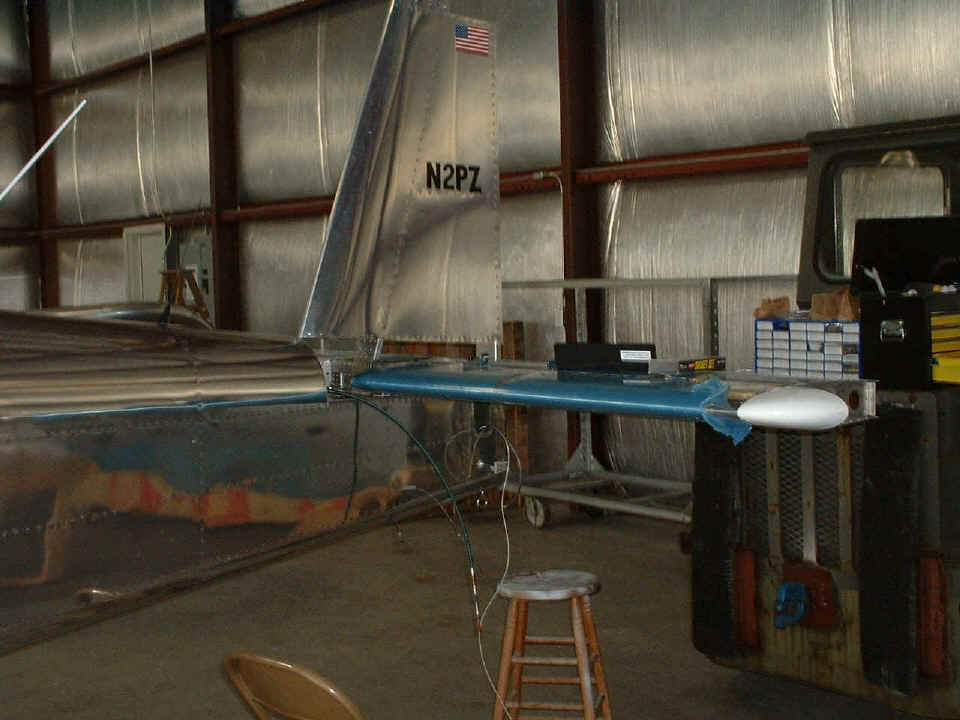 Then came the rudder.  The three bolts went in easily, but getting the washer and nut on the bottom of each of the bolts took some patience.  When you drop them, they fall all the way to the floor down the inside of the rudder.  Van's guys thought of the simple things, too.  I did not have to dump anything out of a blind spot in the rudder. 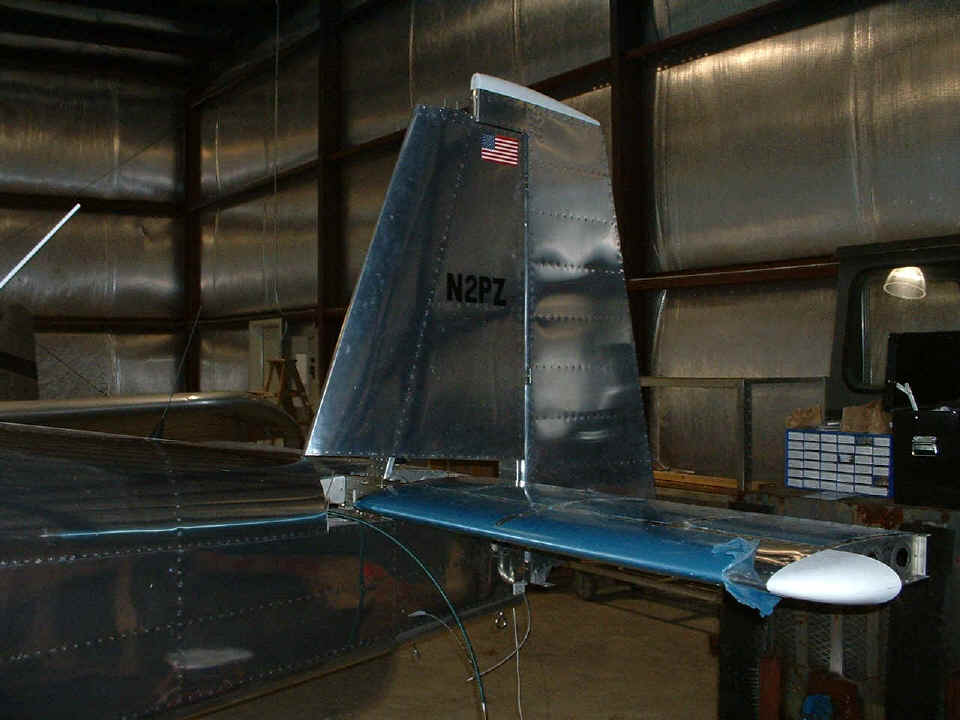 When I got home, I had to take a picture of the "empty nest".   Oh, well.  Now the fun really begins.  I have to drive to work like everybody else for a while, at the airport.  And yes, I will take down the last remaining large print from the wall soon. 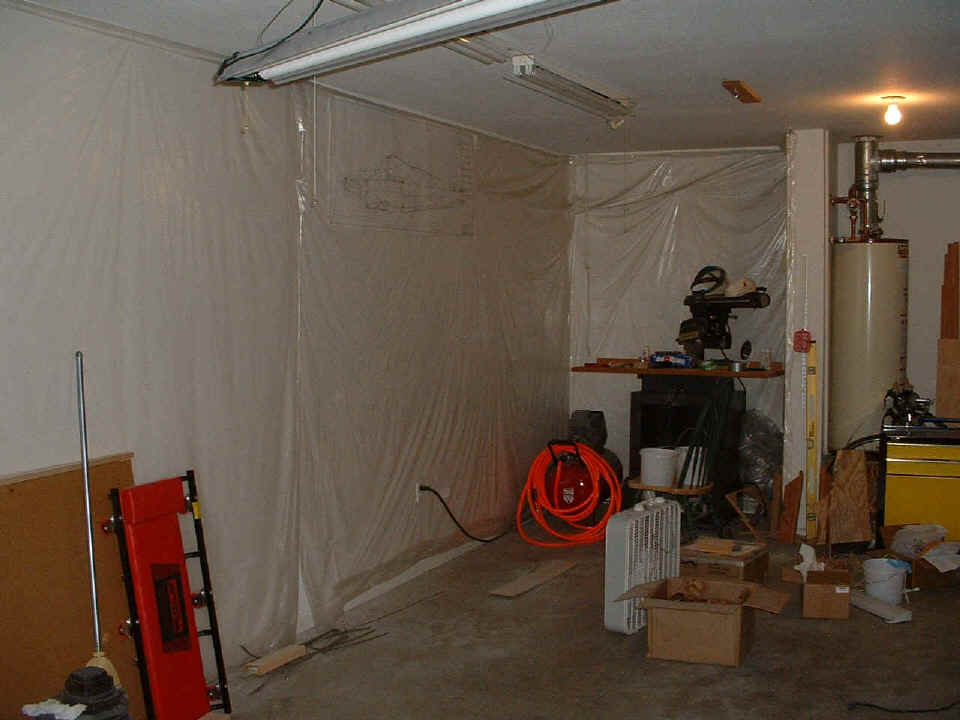 The log book gets 5.5 hours added to it at the end of the day for assembly time at home and at the airport.  Another 2.5 hours of packing and moving to the airport will be noted on my spreadsheet for total project time.  (Drum roll please!)  The total assembly time now stands at 1843.7 hours.  The total project time is now 1915.2 hours. To say that today was a milestone day is an understatement!   It was WONDERFUL!!!

April 28, 2005:  Day TWO at the airport did not seem to get anywhere.  It felt like I was going backward.   I put in some time on the computer project before lunch and finally got to the hangar around 2 PM.  I jumped right in and started by putting on the elevators, then I realized I should not have put on the vertical stabilizer.  Oh, well, I got nice pictures yesterday!  The rudder and vertical stab came off, right after I found two bolts that I need to finish the VS installation.  I finished the elevator installation with the two bolts where they meet in the fuselage.  One 1/4" bolt goes through the elevator control horns at the center bearing, while the second 3/16" bolt goes through the rod-end bearing to tie both elevator control horns together for moving the elevators.  Move the control stick and the elevators go up and down.  I did get the elevator trim tab cable installed and connected to the trim tab.  While I had the VS off, I cleaned up a hole in the rear bulkhead that I drilled yesterday for the tail light strobe cable, etc. 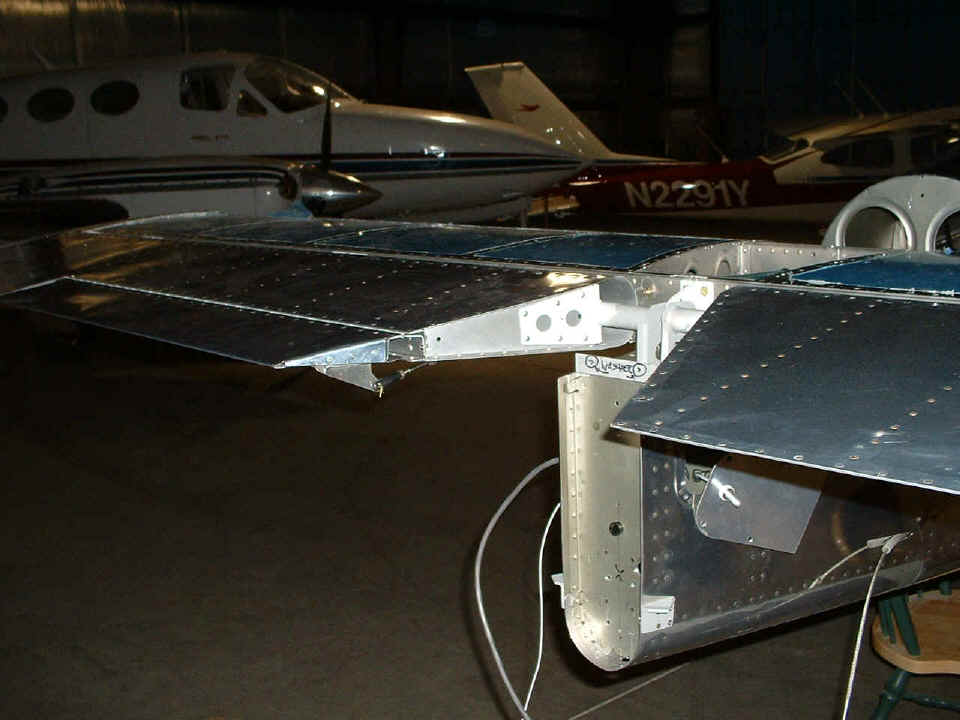 When I first arrived at the hangar, I found the old WWII ground tug moved out of "my space" and I finished placing my work tables and other parts in the appropriate places.  I brought the shop vacuum and a broom to keep the metal shavings to a minimum on the floor.  I also had several visitors today to check on my progress and see the plane.  From 2 PM to 8:30 PM, I really worked only 3.5 hours on the clock actually doing something to the airplane.  After that, the final visitors of the day invited me to the local Italian restaurant down the road from the airport.  I suppose I am now officially an "airport bum" or "airport rat" by some opinions.  It feels a lot like it did in 1979-80 when I got into radio-controlled model airplanes.  More tomorrow, I promise.

April 29, 2005:  At least this day got things back together for real this time.  I brought along the hinge rod I used when I first put the VOR/GS antenna on the vertical stabilizer.  The rod was easy to push through the holes in the top and bottom ribs of the VS when it was lying on the work table.  The RG-58 cable was again taped to the end of the rod, then pulled through both holes.  The "hockey puck" base of the dipole antenna was first bolted in place with the rods pointing aft, then the RF engineer in me got to thinking about that position.  Although it may look "cool" being swept backward, the VS and rudder would always be "shading" the dipoles more than if the rods were forward swept like the wings on the X-29 research plane.  It made me realize the guys at Cessna had a reason for doing it that way.  Why inhibit reception when you don't have to do that? 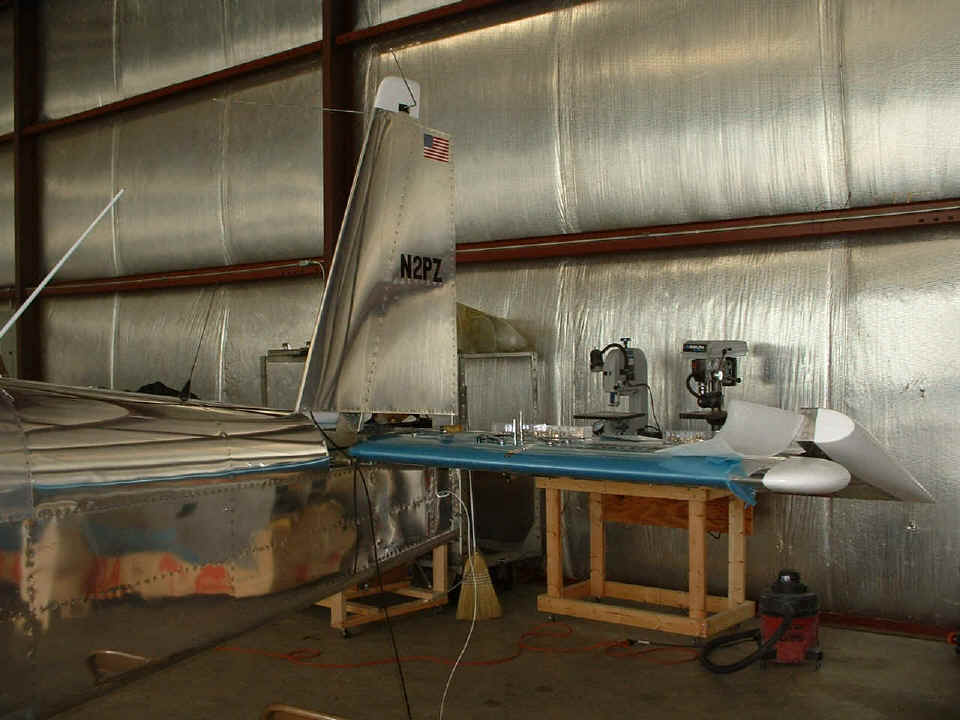 The rudder is now back in position and ready to accept the lower fiberglass cap and tail light assembly.  If you look in the background, you will see the fiberglass wheel fairings on a shelf at the back wall adjacent to my band saw and drill press table. 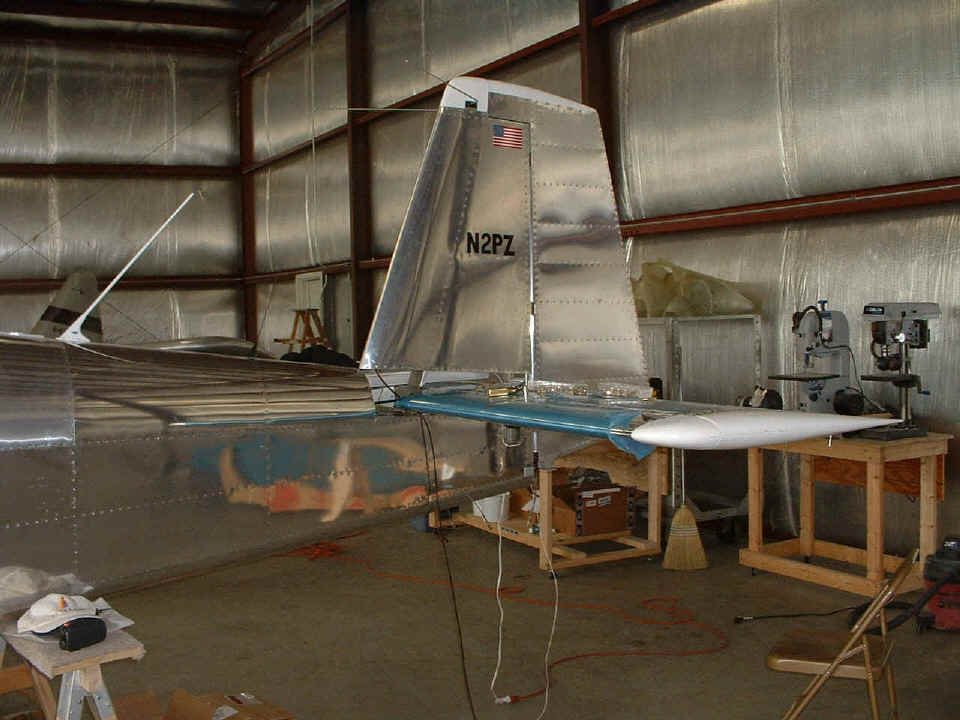 This is one of those shots where the camera can see better than I can.  I routed the ground wire for the tail light through the rear bulkhead along with the power wire and the strobe cable.  The ground wire has the ring crimped on the end and is ready to be placed under one of the bolts that go through the tail tie down bar.   Right after I took this photo, I had to put the ground lug under one of the flat washers using the braille method. 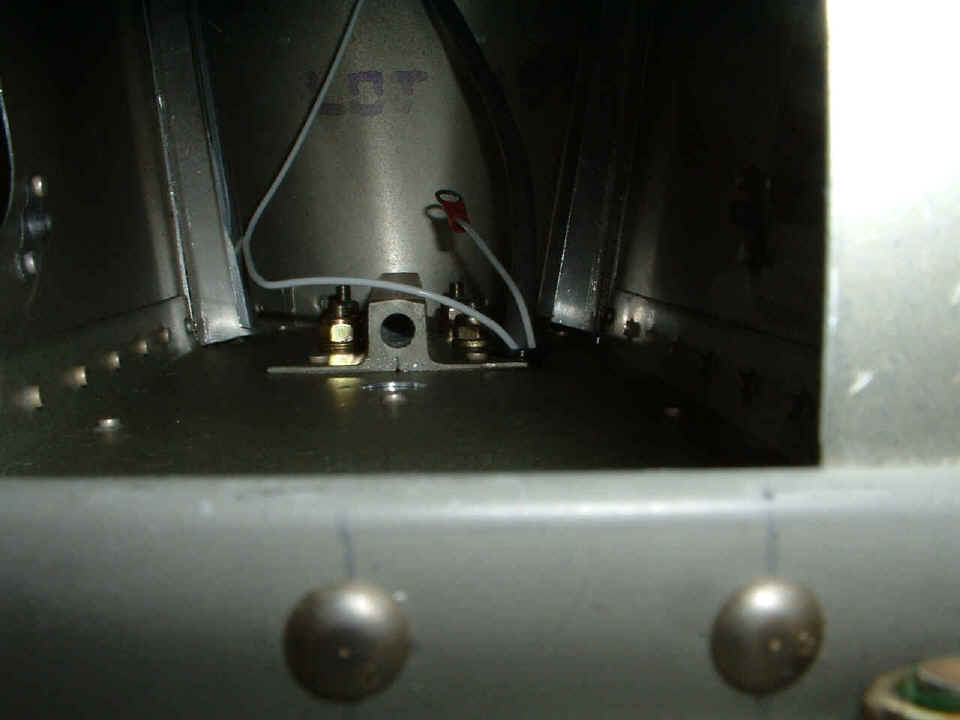 In order to take the picture above, the camera was set in "macro" mode and positioned under the vertical stablizer looking down at the area in front of the last bulkhead.  With eight pictures on this page, it is time to move on to Page 119 at the Airport.