May 8, 2005:  The big thing this Sunday was to verify the wing geometry and get the bolt hole drilled at the intersection of the rear spar and the tabs coming out of the fuselage behind the seats.  The wing incidence was verified with this big level at the root and the wing tip on both wings while the fuselage longerons were in a level condition.  The distance from the top center of the F709 bulkhead (near the tail) to the last wing tip mounting hole on each wing was exactly the same! 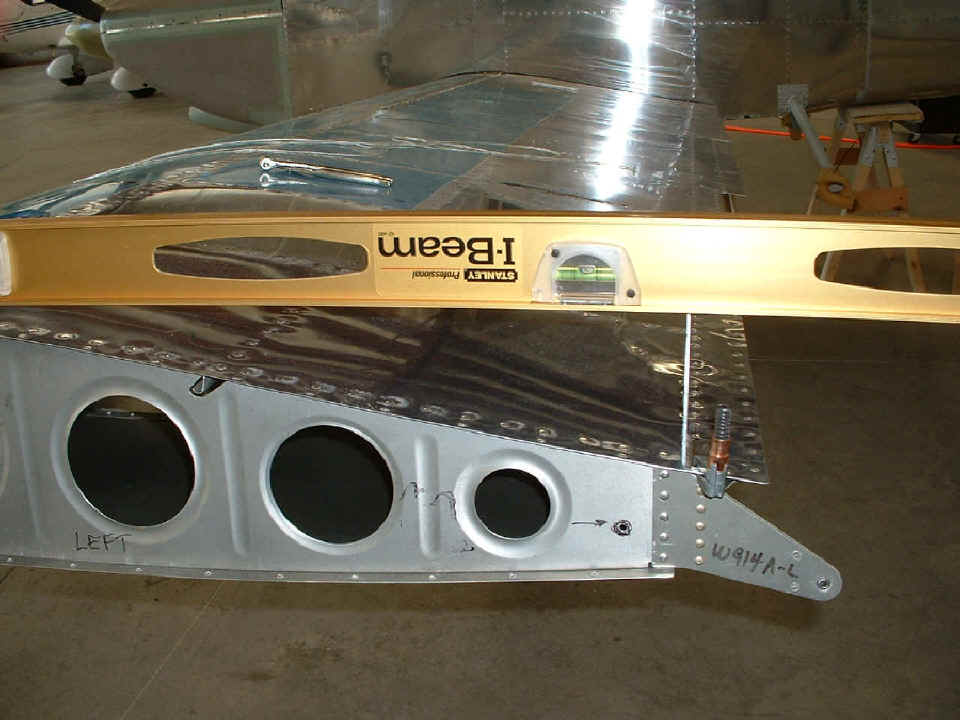 And to prove the wing is also in a straight line from wing tip to wing tip, I dropped a plumb line from each wing tip, then stretched a string above the floor from one wing tip to the other.  Then I moved the plumb lines to the wing root ribs on each side of the fuselage.  It looks like it all came out the way Van's designed it to be!   And you can see that I put the main gear up on the boards from one of the packing crates to make it easier to level the fuselage fore-and-aft.  I still needed to let a small amount of air out of the tire on the nose wheel to fine tune the leveling. 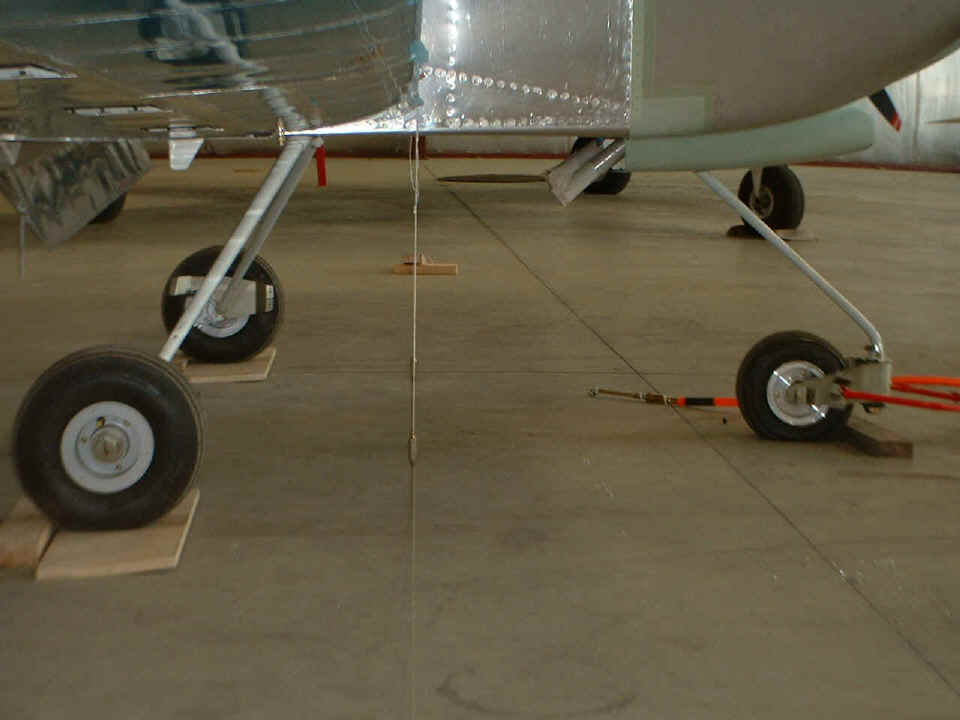 With the proper wing geometry confirmed, it was time to drill the bolt holes at the rear spar of the wing where it is secured to the fuselage.  Can you tell which side of the photo is the reflection from the side skin of the fuselage? 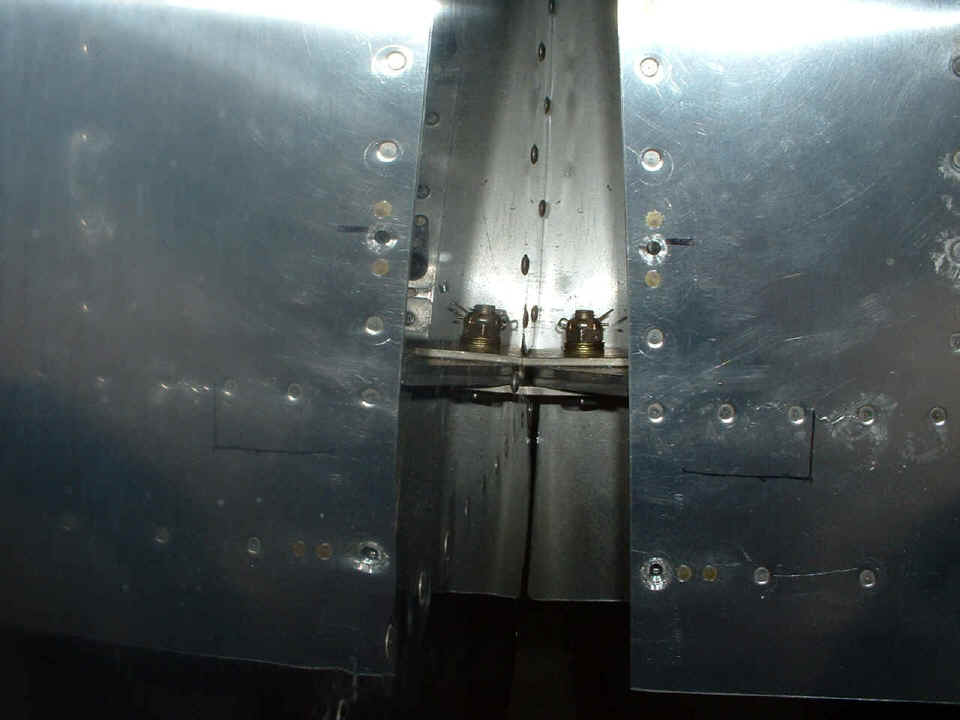 I moved the project into the back corner of the hangar when the AT-6 pilot came back from the airshow he was doing in Texas.  In this position, there is no need to move my airplane to get either of the other planes on this side of the hangar out for flight.  I won't be flying it until June, so this is a good place to be for the remainder of my work on it. 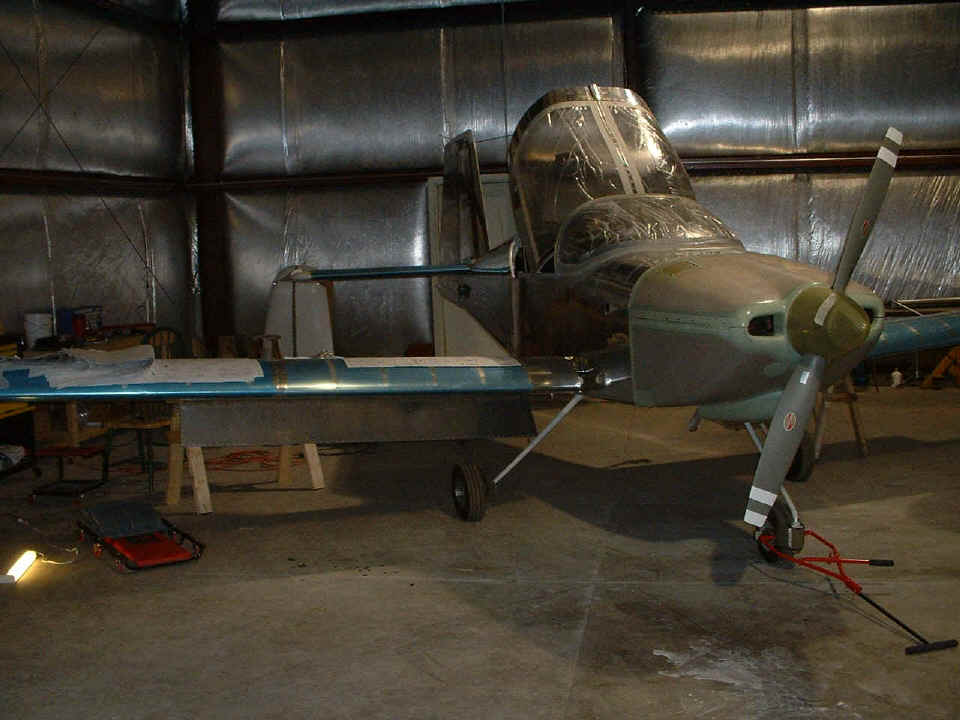 The last thing I did tonight was to get the right aileron installed and the aileron push-rod connected to the aileron bellcrank.  The aileron calibration jig plate is in position on the bellcrank.  This is the last thing needed before connecting the flap linkage on the right flap.  I cut the hex rods to length and adjusted the rod-end bearings on that linkage per the drawings.  Tomorrow I get to put in the bolt inside the fuselage that will connect the flap actuator to the right flap.   The flap linkage to that bolt may need some minor adjustment to align the flap in the UP position with the aileron. 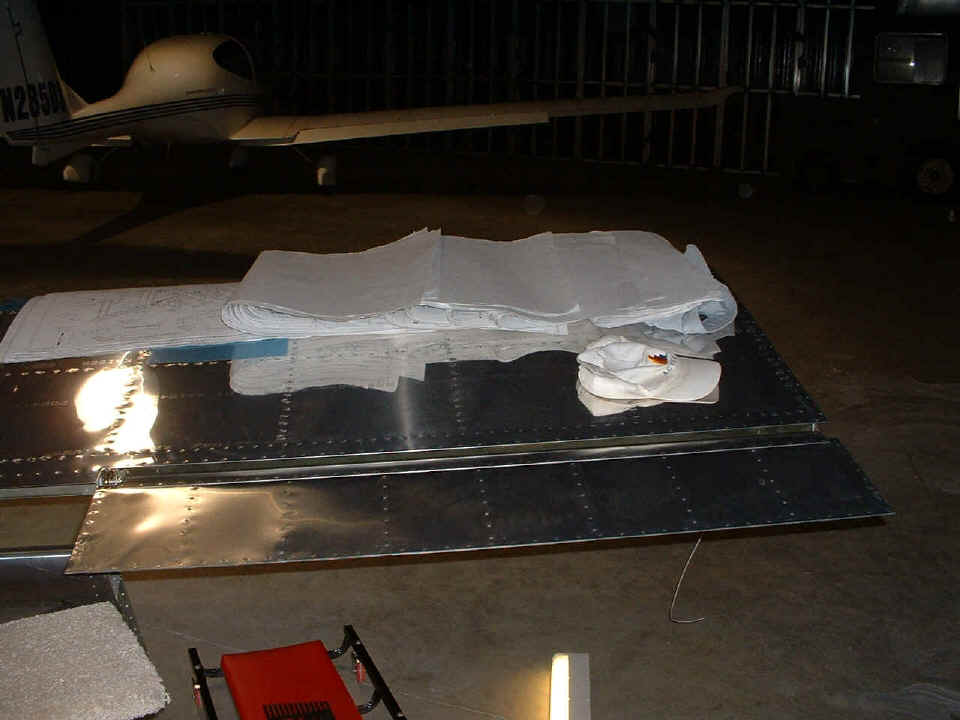 I had to take a break this afternoon to run to ACE for a 1/4-28 jam nut for one of the flap linkage assemblies.  When I got back to the airport I went into the FBO office to sit in the cool air and eat a Red Delicious apple.  I sat at a table and had a discussion with another pilot who was wearing a shirt with Leeward Air Ranch (Florida) on it.  I mentioned that I had lived not far from there from 1978 to 1989.   When we got around to the "who are you" question, his answer was a surprise.  He was the neighbor who lived in the house behind me on the next street over in the 1960's.  He thought I looked familiar, but since I am now bald and gray, he was not really sure.  I had to look at him long and hard to see that older teenager I knew from way back then.  We swapped a few stories about what each of has done since our youth.

The timer showed 3.9 hours of work time on the airplane today.  That totals 1893.3 hours of construction time to date.  I would say that the 2000-hour mark may be a reality by the time I have everything ready for the airworthiness inspection.

May 9, 2005:  Monday morning saw some work on my "other job" including a telephone consultation with an old friend from California.  I got to the airport about 3 PM and managed to put in 4.5 hours of work time on the airplane.  I started by taking out the wing bolts on the right wing one at a time and lubricating them for future removal (if ever needed).   By putting each bolt back before removing the next one, I did not need to jack up the airplane to unload the landing gear.  In the RV-*A series airplanes, the main landing gear weldments have the main wing spar bolts going through them.  The close-tolerance bolts will not always line up with the wing spars and the gear leg weldments when the weight of the airplane is on the main landing gear.

After the session with the bolts, I got started on the aileron/flap alignment issues on the right wing.  I pulled off the rod-end bearings from the end rib of the flaps and put some blue Permatex thread locker on the threads of the ball sections of the rod-end bearings.  I also put in one washer to space the flap linkages a little further away from the inside wall of the fuselage.  I had opened up the exit holes for the flap linkages yesterday, but needed to enlarge the holes for full clearance when the linkage was pushed to the full flaps position.  Yes, I connected the battery ground cable and moved the flap actuator to full FLAPS UP.  I adjusted the flap linkage to align the RIGHT flap with the right aileron when it was also properly centered using the aileron jig on the aileron bellcrank. 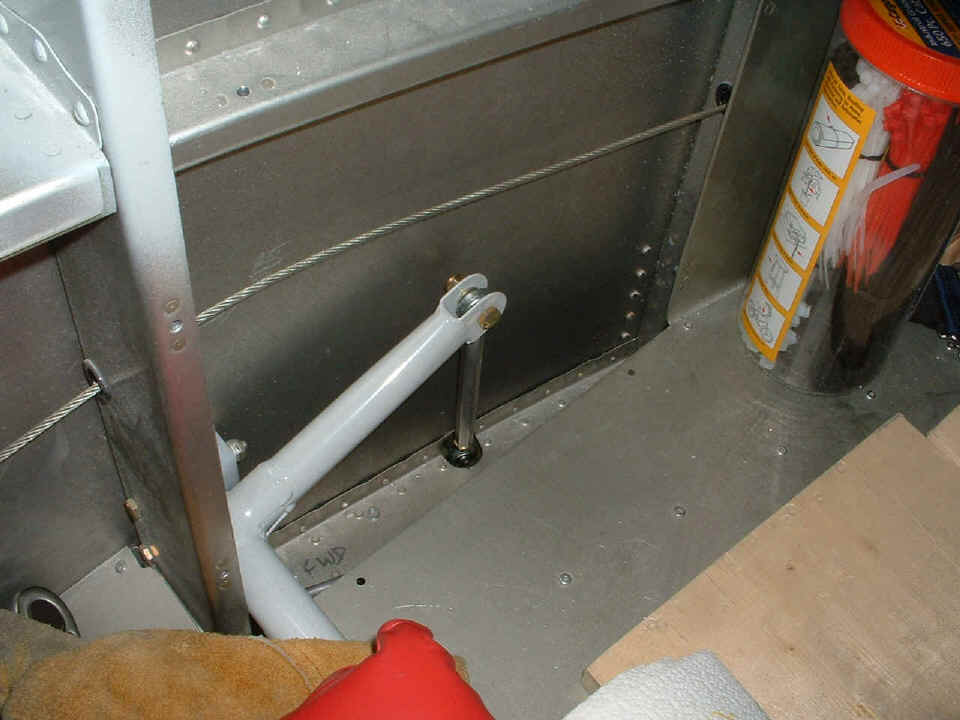 Here is how it looks after my adjustments on the right wing with the aileron centered and the flap actuator in the FULL UP position. 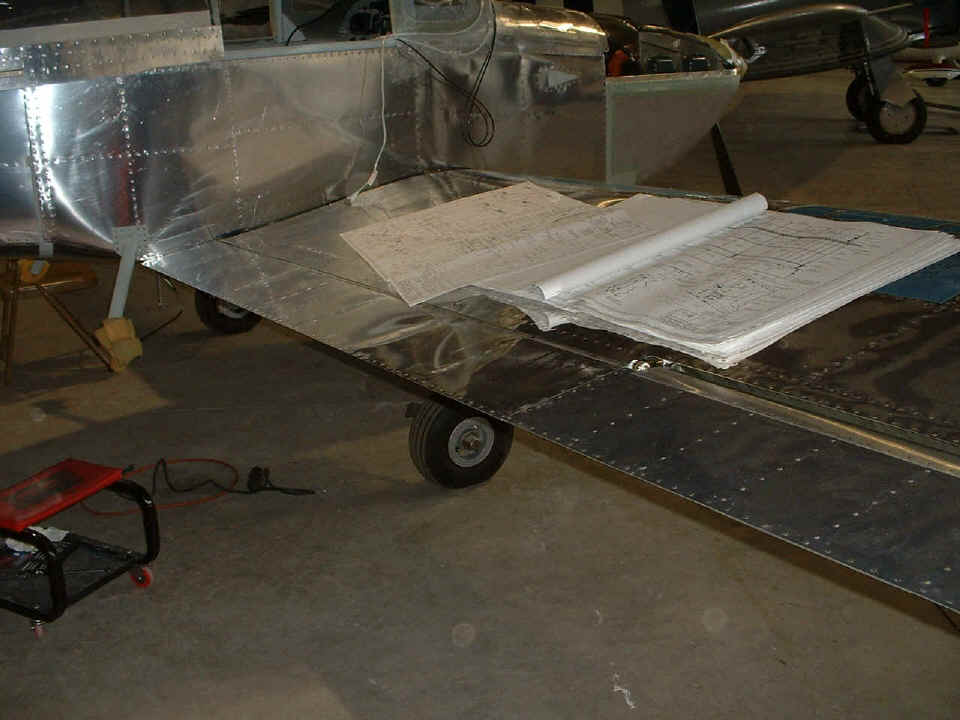 And the last picture for page 124 shows the flap position FULL DOWN, and the aileron with the control stick connected and pushed to the LEFT which will roll the airplane to the LEFT in flight. 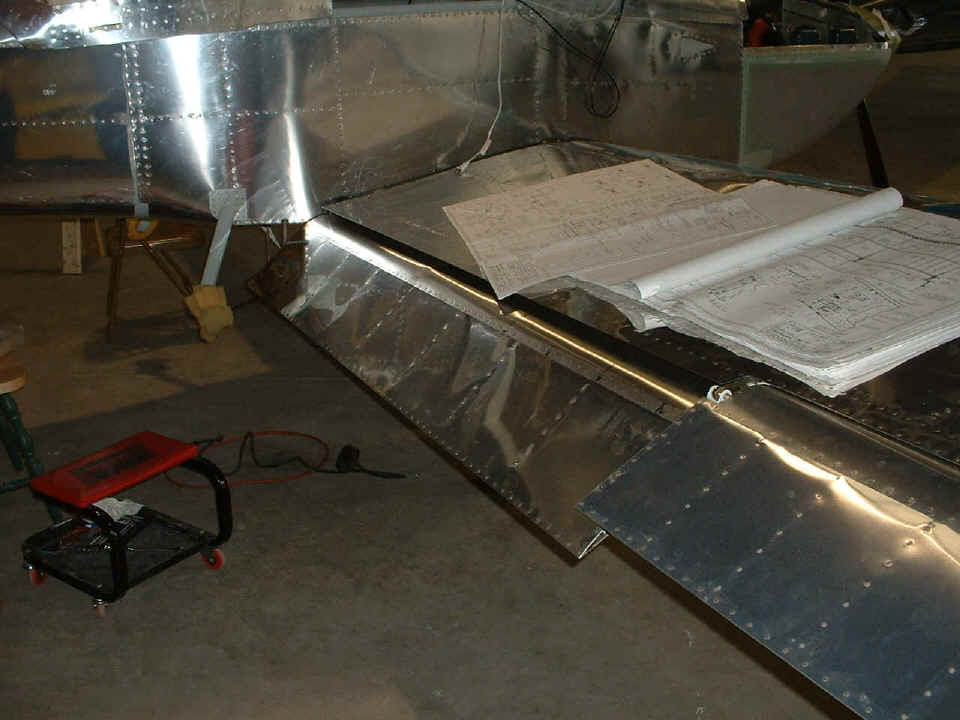 That makes EIGHT pictures for this page.