May 29, 2005:  When I realized I had to get K1000-06 platenuts into the F709 bulkhead at the end of the F775 rear top skin as shown below, I had to figure out a method to work in that tight space above the longeron.   Take notice of the screw threads sticking out between the clecoes below.  The platenut is already in position in a place where fingers and hemostats don't work at all.   I still have one screw that dropped down in the tail cone that I will have to use the vacuum cleaner to get out of there (if I am lucky). 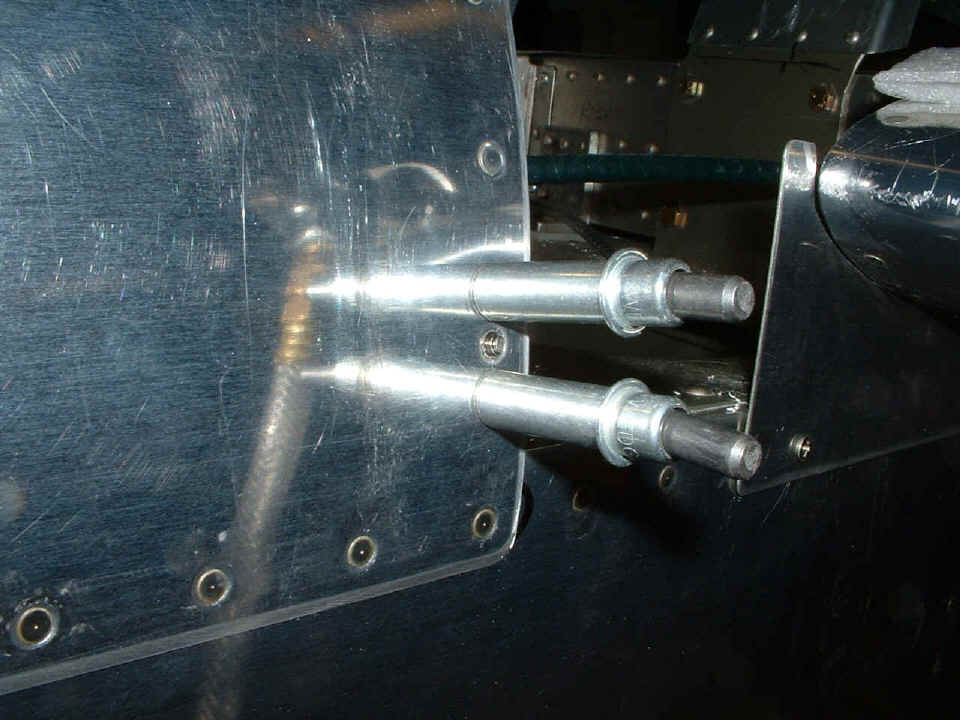 Here is what I figured out about placing the platenuts in the tight spots.  I taped the screw to the end of the screw driver with masking tape when I put the platenut on the outside of the fuselage skin before drilling the rivet screw holes.   Next, I put a screw through a platenut in the normal manner to open up the threads just a bit.  Then the screw was removed from the platenut and replaced from the back side as shown below.   A strip of masking tape was used to keep my stubby Phillips screwdriver engaged with the screw head.  The idea is to maneuver the platenut and screw into alignment with the holes that were drilled from the outside of the fuselage through the skin and the bulkhead flange.  The only thing I did wrong was to put too much of the screw back through the platenut.  On the first one I installed, it worked well.  The screwdriver was easy to turn the screw out of the back of the platenut when the clecoes held the platenut securely in position.  But when I tried this method on the second platenut down near the longeron, the tape broke and left the screw behind.  What works is to just engage about 1/2 turn of screw thread in the backside of the plate nut.  When you can see the platenut lined-up through the rivet and screw holes, push through the clecoes to capture the platenut, then remove the screw. 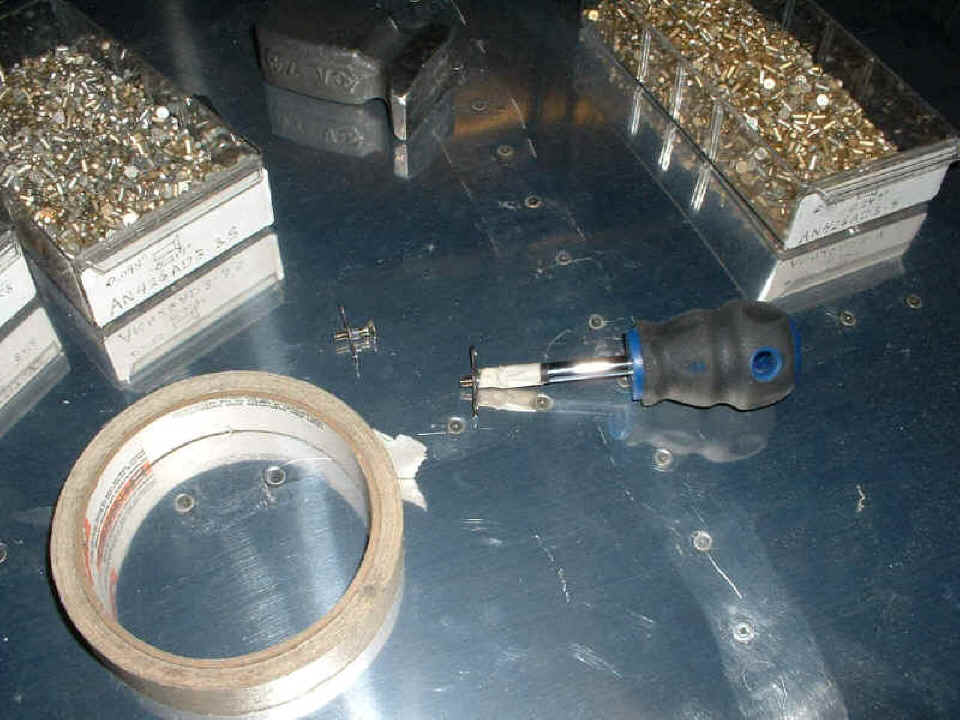 Before you try to put in a rivet, be sure to put the 6-32 screw all the way into the platenut from the outside of the fuselage.  This will keep the platenut secure when you remove a cleco to put in a rivet.  The screw also gives a good "braille" reference point for placement of the bucking bar for riveting.  The rivet on the top side was easy to set with my small bucking bar.  The one between the screw and the top side of the longeron did not have enough clearance for the bucking bar toe.  I will end up using a 3/32" blind rivet there.  I have to check with other builders at the airport or get an order ready for Spruce to get some of those small blind rivets.  I have used all of the ones that came with my landing light kits. 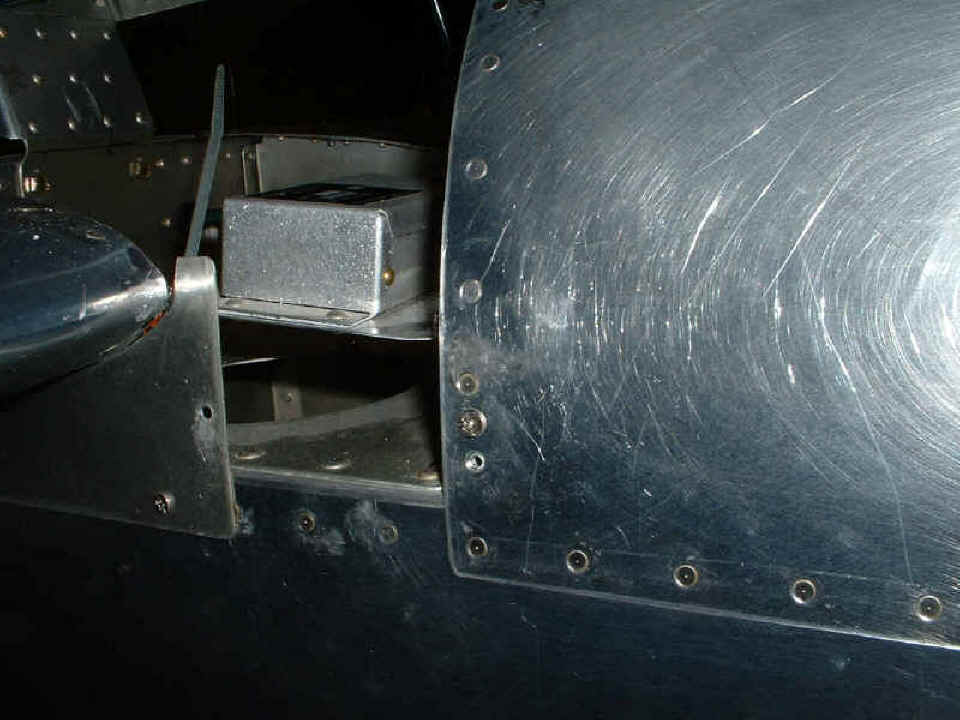 At 9 PM tonight, I called it a night at a total work time for today of 7.0 hours.  I cleaned up the work area and headed for home out the airport gate by 9:30 PM.  It is now 11:20 PM as I finish this entry.   Tomorrow will be an early session at the airport with a return home much earlier in the afternoon.  The reason is to prepare for my Tuesday cross-country trip to Oregon that starts with a 6 AM flight out of Chattanooga Airport to Cincinnati and then on to Portland, Oregon.  The long ride from Cincinnati to Portland is first class Tuesday and on the return flight on Friday.  The CRJ between CHA and CVG is all coach seating, but those are relatively short flights compared to the ride to and from Oregon in a 737-800.  Then on Wednesday and Thursday, June 1 & 2, I get to fly  with Mike Seager for my transition training in an RV-6A and/or RV-9A for a total of FIVE hours during those two days.

May 30, 2005:  Memorial Day. This morning started with about half an hour of clean up on the wheel pants in the garage.   I packed them up and headed for the airport and finished drilling out the holes that were covered up with the recent addition of fiberglass layers for the lower gear leg intersection fairings.  I also found some 3/32" pop rivets to fit in the empty rivet holes as in the photo above.

The big deal today was putting some primer paint on the fiberglass around the windshield after I used my drill and a rotary sander made from Scotchbrite pads.   After that I peeled off the tape and plastic from the canopy and windshield.   This is one of those "feel good" moments. 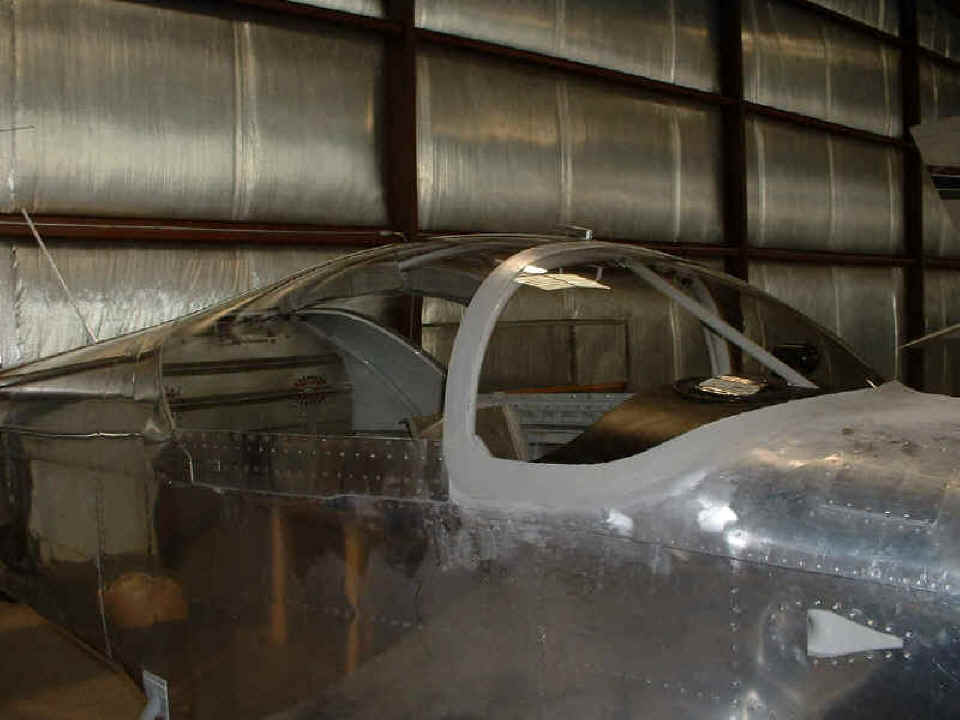 It seemed like I worked on this for over two hours.  Some of the vinyl tape around the windshield, and some of the masking tape on the canopy had to be "urged" to let go with some very careful maneuvering of my dull pocket knife.   After that it was quite a session with the canopy cleaner solution and the special Duport Sontara wipes (glorified paper towels).  I am sure someone will email me with the reason they are so good.  I think it has to do with being scratch resistant on plexiglass.  They really do a good job!  The total work time in today's two sessions was 5.1 hours. 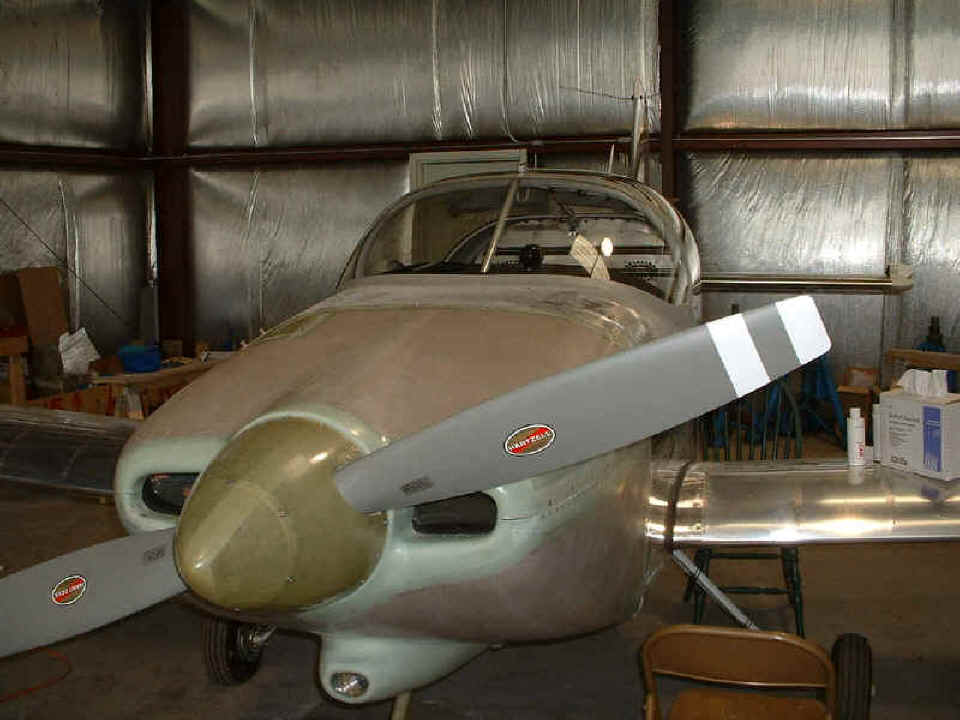 I wanted to get away from the airport early today, even though the canopy and windshield still needs some cleaning inside and out in a few places.  I have to get up at 4 AM, be at the Chattanooga Airport at 5 AM, and my plane leaves for Cincinnati at 6 AM.  I will have about two hours on the ground at CVG before the non-stop flight to Portland, Oregon departs.  If it is on time, I should be on the ground at PDX by 11:15 AM PDT (2:15 PM EDT.  At least that leg of the trip and the return to Cincinnati are FIRST CLASS seats on my frequent flyer trip.

May 31, 2005: I have wireless DSL internet access at the Bed & Breakfast Inn here in Scappoose and wanted to post the day's travel news.  I boarded my flight in Chattanooga on time at 6 AM, but it was delayed over an hour due to ground fog.  We were late getting into Cincinnati, but my connection still worked out OK and my checked bag also made the flight.  The FIRST CLASS flight to Portland, Oregon departed on time and arrived at PDX about 15 minutes ahead of schedule.  I have been to the Scappoose airport FBO to locate the meeting place and talked with Mike Seager and confirmed we are on for 8 AM tomorrow morning.

June 1, 2005:  I had my first flight in the LEFT seat of an RV-6A.  The hardest thing for me to do is "dive at the runway numbers" at 85 to 90 MPH from 600 feet AGL instead of the old Cessna methods I have used for so long.  Getting the constant speed propeller power settings burned into my brain is the next big deal to getting the flight speeds needed for smooth flight transitions from climb-to-cruise and back again for landings.  Compared to the RV-9A airplanes I have flown in, the RV-6A has a very well-defined stall at 62 MPH on the one you see below.  This is one of Van's training aircraft that has over 3000 hours on it.  I am just the latest student pilot/builder to fly 1.1 hours in it earlier this morning.  It is now after lunch and almost time for my second flight transition lesson from Cessna's to RV's. 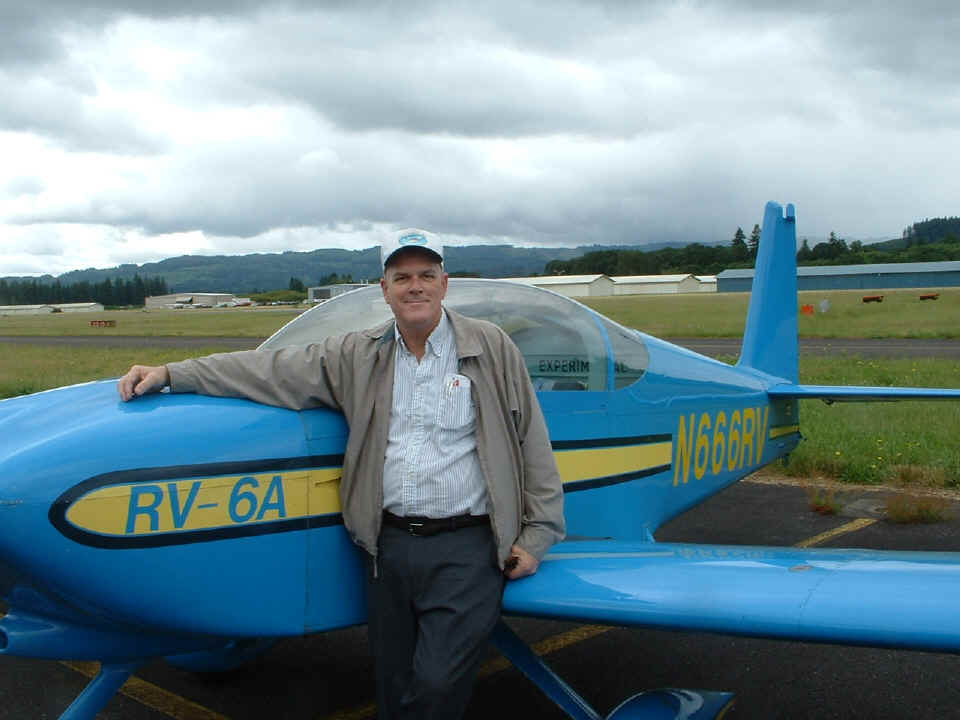 Evening update from Scappoose, Oregon: The wind was blowing a bit harder after lunch, and it was a crosswind of course!  It made for some interesting and humbling experiences in my 1.5 hours of flying and go arounds after lunch.  Mike Seager shows very good patience with my meager skills and my efforts to learn from a master of all types of Van's RV aircraft.  When I got back to the field just after lunch, Mike had some technical questions for me to answer about how to get the most from his cable television amplifiers in his system at Vernonia, Oregon.  At least I was in my element about how that technology works.

The total flight time for today was 2.6 hours of dual instruction in the RV-6A.   I also got a call from John Burgin, the DAR who will be inspecting my airplane next week.  He told me he left home in Birmingham around 12 Noon this past Saturday, May 28th.  The US postal service claims they tried to deliver my Express Mail document envelope to him at 8:56 AM and no one was home.  Oh, Well!

June 2, 2005:  The second day of flight training ends with a total of 5.9 hours of dual-instruction going into my pilot log book.  That is the two flights from yesterday plus 3.3 hours from two flights today.  I got two endorsements, one for RV-*A series airplanes, and my biennial flight review (BFR).  I can now legally fly Van's RV-6A, -7A, -8A, and RV-9A airplanes.  No taildraggers for me at this time and that is OK with me.  I have only one picture to share today, and that was taken after I got to my hotel room at the Hampton Inn near the Portland (PDX) airport.  The hat has my N2PZ registration number on the back in white letters. 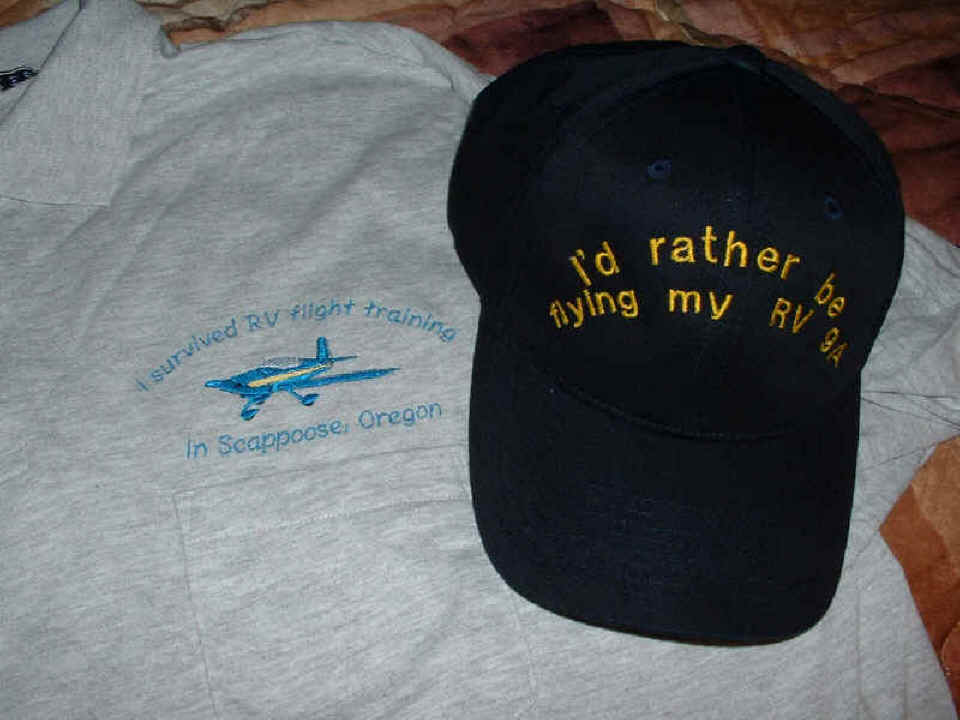 Two of the last three landings were a simulated engine-out, and a really BIG SLIP to a landing with FULL FLAPS.  Talk about being in a "down elevator" heading for the deck!  WOW!  What a ride!  And I greased it, but with not quite the correct angle of attack during the roll out for best aerodynamic braking while rolling on the main gear only, holding the nose gear off the runway.

After putting the RV-6A back in its hangar, Mike and I were walking across the airport to the local EAA chapter club house which served as his office.  About half way across the field, he tells me that the longer wing span of the RV-9A requires me to have 10 MPH LESS approach speed than all the shorter wing models, RV-6, -7, -8.   Otherwise, the flight characteristics are very similar.

Tomorrow is the ride home on Delta Airlines, back to Cincinnati FIRST CLASS, then on the CRJ-70 down to Chattanooga arriving around 4:30 PM Eastern Time.  That is all for now, bed time approaches and an early call for me (local time).  Right now, I am putting my body clock back on Eastern Time at 10:33 PM EDT as I write this.  I will be up at 4 AM PDT for a 7 AM flight out of PDX.  I just think of it as sleeping in until 7 AM Eastern time and taking a 10 AM flight.  No problem!  I will check in tomorrow night with an update IF I end up getting an aircraft inspection after 5:30 PM tomorrow.  John Burgin will be in Chattanooga on vacation tomorrow and he offered the possibility of the inspection tomorrow instead of next week.  I will let you know what happens.