June 6, 2005:  The prop turned over and the fuel we had pumped into the carburetor in our earlier test was ready to go.  I did not use the primer again or pump the throttle more than one time.  Rich snapped this picture during the start just before the engine came to life since it was tested at the Penn Yan Aero last year! 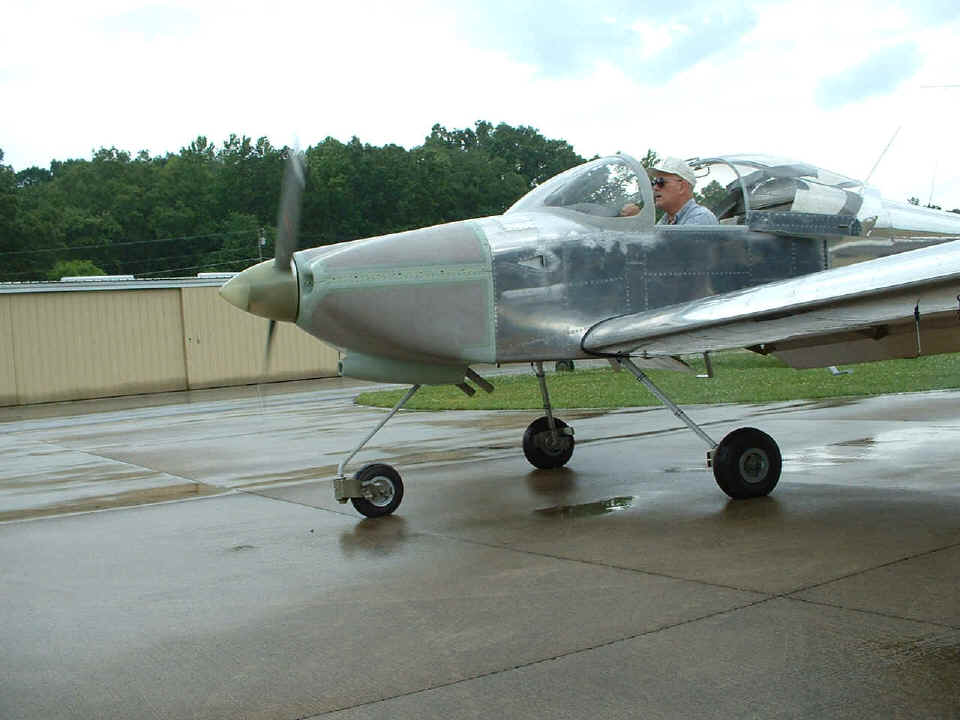 Richard started taking pictures.  This one is with the engine running.   You can tell since the blurred prop is "wider" than during the start picture above.  My sincere thanks go to the guys at Penn Yan Aero Service for doing a good job with my engine in the test chamber for 1.5 hours! 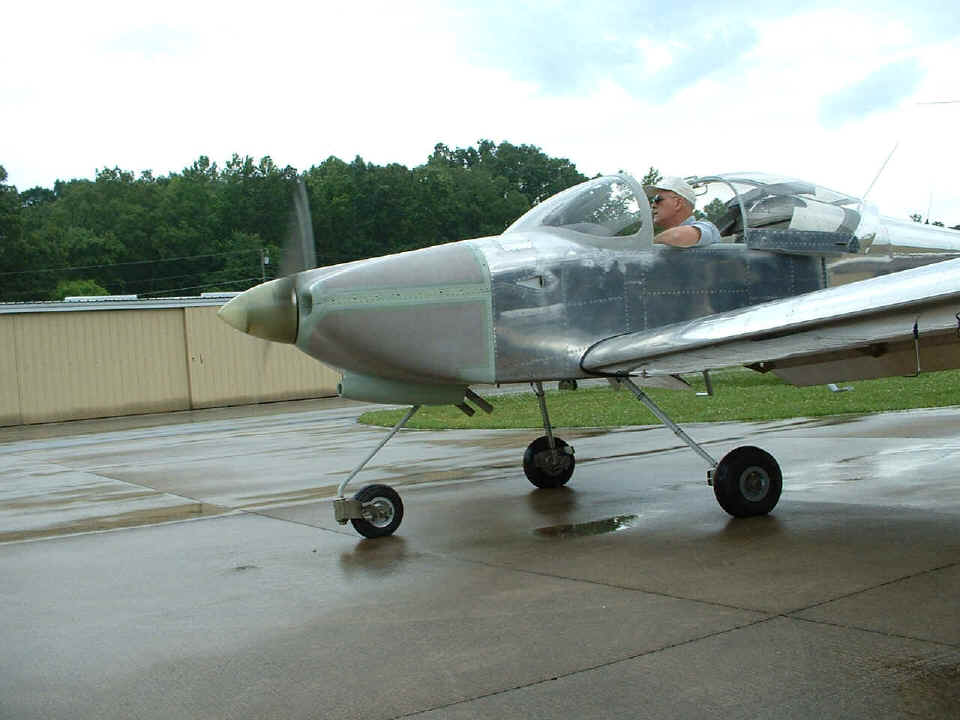 This shot is taken when I am satisfied that it is OK to taxi up to the FBO ramp.  I gave Rich the "let's go" signal and he snapped this picture as I started to pull away from the hangar. 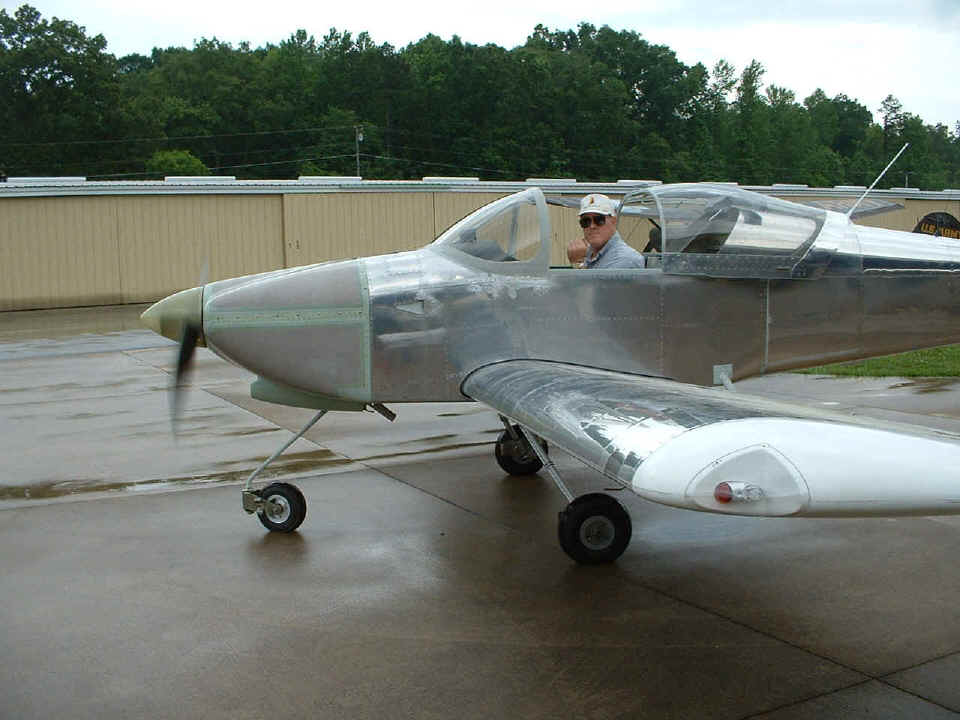 I taxiied up the ramp in front of the FBO at Collegedale, then went back to the run-up area adjacent to runway 3.  I did a MAG check and realized that I had a problem when things tried to go quiet in one MAG key position on the MAG/starter switch.   I moved the plane back to the hangar with the mag switch in the "BOTH" position and shut the engine down.  Then I noticed I had not pushed in the pullable breaker powering the Light Speed Engineering solid-state ignition module.  I told Rich about it, then started the engine again and it did a great hot start.  With just one set of plugs running earlier, the EGT was over 1300 degrees, and the CHT's were just over 300 degrees.  The hot start using the MAG and the LSE ignition was immediate.   I cycled through the MAG check switch again and everything was just fine!  I shut the engine down and we rolled the airplane back into the hangar for a cowl removal and another engine check.  The smell of burned paint on a new engine reminded me that I just took delivery of a NEW sports car with wings.  In two days, I should have the airworthiness certificate, then we can get started on the remaining 39.9 hours of testing.  Yep, the Hobbs meter has 0000.1 hours on it.   We tested more things than I had intended, but it proved that my wiring was correct. 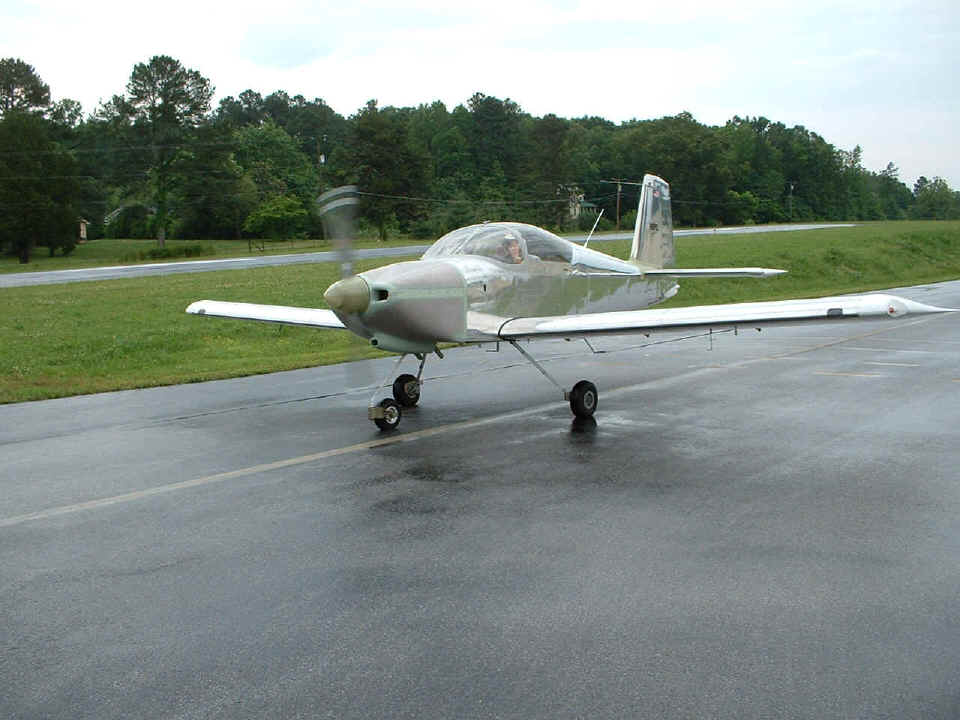 Here is what a set of Vetterman exhaust pipes look like after running 1300-degree hot exhaust gases through them for the first time. 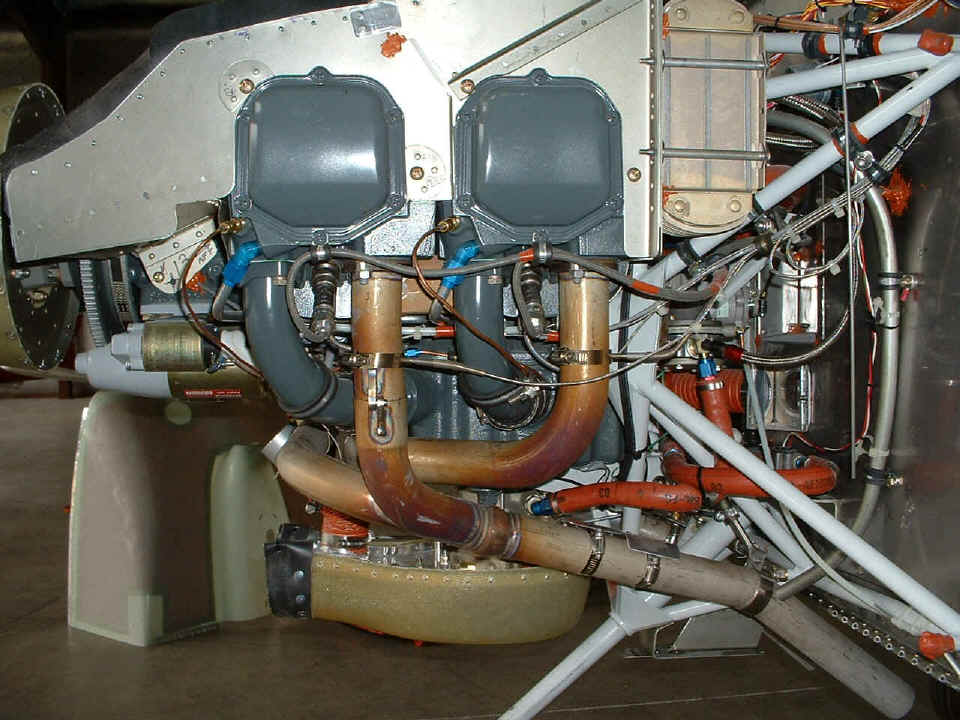 Rich looked over the engine and pronounced it ready to fly and headed for home.  I looked at the bottom of the cowl after he was gone and found some oil at the rear of the engine.  I traced it to the area around the prop governor at the back of the engine, and also felt under the oil filter adapter with a clean paper towel.  I found one drop of oil under the oil filter where it screws onto the right-angle oil filter adapter.  I also noticed that I was able to turn one of the bolts on the prop governor about 30 degrees to tighten it fully.  The AN-fitting coming out of the oil pressure tap point on the engine accessory case also turned "ever so slightly" to tighten it up securely.  I will check the cowl again tomorrow after taxi tests on the runway and going down to the north end of the runway to the compass rose for calibration of the compass.

To say this was a milestone day is an understatement.  Enterprise LIVES and breathes at last!  If this was a birth day, then on Wednesday, June 8th, we cut the cord and go flying right after the airworthiness inspection - - weather permitting of course!

June 7, 2005:  More taxi tests today and compass calibration down at the north end of the field.  This is after three taxi runs up and down runway 3-21 at Collegedale Airport.  The maximum air speed indicated was 42 MPH and the GPS was also reporting similar ground speeds since there was very little wind at the time of these runs. 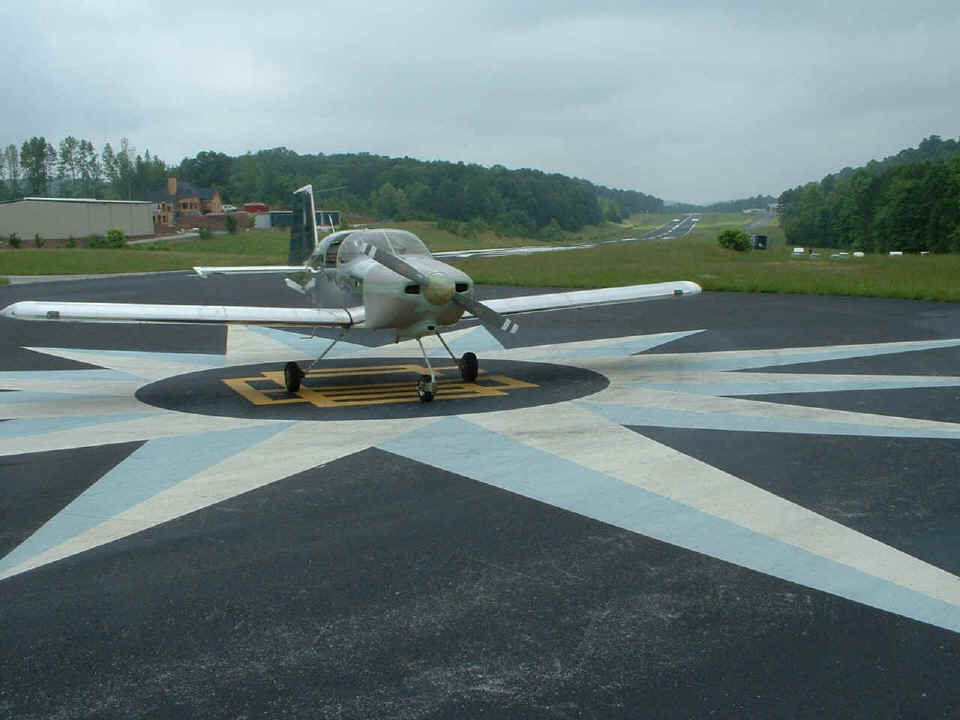 I must have turned this thing around four times to the cardinal points of the compass rose and I also checked alignment with my precision compass that got such a workout in my satellite engineer days of the 1980's.  This photo has the nose of the airplane pointed EAST.  When I taxied back to the ramp and cleared the runway, the LEFT tank ran out of gas!  That was what I wanted since I need to start filling the tank from EMPTY to calibrate the fuel gauge.  When I get ready for the next taxi test, I will fill the LEFT tank and do the calibration of the gauge, then taxi a few more times until the RIGHT tank runs dry.  After that one is filled and calibrated, it is time to fly of course! 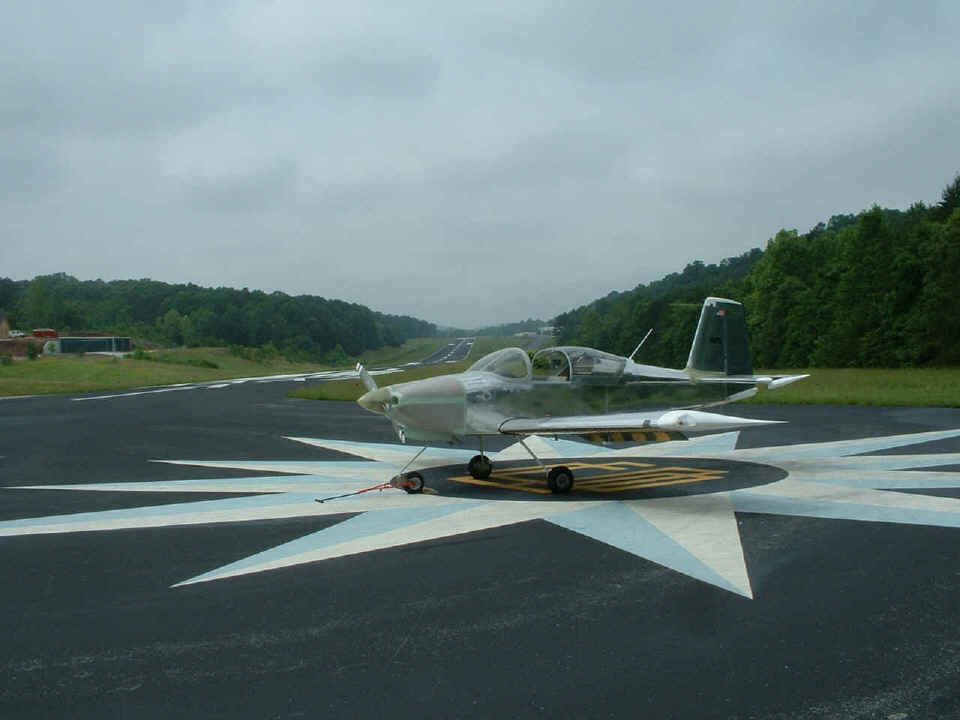 I called Van's Technical Support while I was down here to ask about how many turns of the elevator trim knob should it take to get from the "IN LIMIT" of the cable to the point where I want to have neutral or "cruise" trim set on the trim tab clevis.  The knob turns 360-degrees NINE times from stop-to-stop.  Ken recommended that the fourth turn out from the down stop be the set point for LEVEL cruise trim.  That leaves FIVE turns of the knob for UP trim, or slow flight as in approaches to a landing.  I called Abby at Flightline interiors and she tells me she was planning to ship my interior and seats this Friday, but I put her on hold since I will be out of town next week and won't be here to receive the shipment.  I also talked to her about my changes for the right seat/baggage shelf modification I am planning.  It has a slight effect on what she will be doing for me.

No hours to add to the construction LOG, just time calibrating what is already attached.  Since I did not leave the ground, I cannot make an entry in my pilot log book.  The Hobbs meter still does not have the first hour completed on it yet.   It is coming up on 5 PM as I post this.  I have to run to a Dalton High School reunion planning meeting with some old friends.  More tomorrow after the airworthiness inspection.