July 28, 2005 UPDATE:  I took a parting shot of Copper Harbor and started heading for my cousin's house near Brule, Wisconsin. 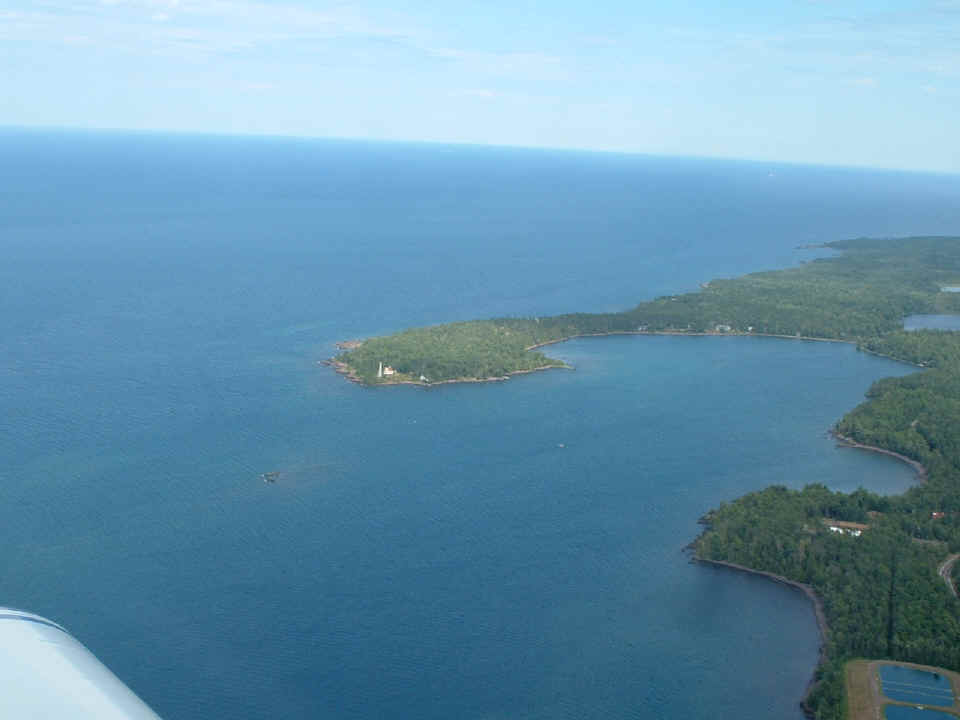 As I flew along the south shore of Lake Superior, I noticed these crimson cliffs.  I believe the iron ore in this area is the reason for the color.   Remember that these photos are all taken just a few hours after I departed Oshkosh on Thursday, July 28th.  This particular photo is near the Wisconsin/Michigan State line just north of Saxon, Wisconsin (on US 2). 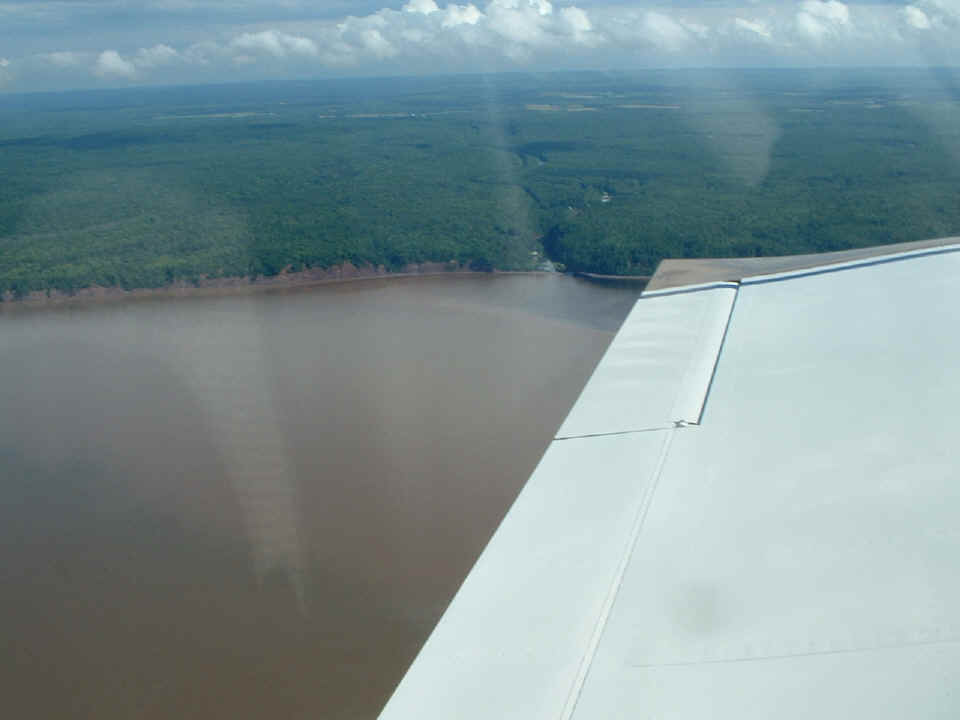 I got to my cousin's house around 4:40 PM and circled overhead twice to see her and her husband both out in front of the house looking up and waving to me.  I had called her on my cell phone from Iron Mountain before I started the engine for takeoff after getting fuel.  I was within 10 minutes of my ETA.  I would have to blame the delay on the line of rain showers I had to get around over in the U.P. north of Iron Mountain, MI.  I flew to the nearby Bayfield County Airport (Y77), near Iron River, Wisconsin.

July 29, 2005 UPDATE: I did not take a single picture at the 3000-foot grass strip that is the Bayfield County Airport.  I paid the three dollar landing fee for overnight tie-down by putting my dollar bills in a locked mail box in a little booth near the picnic tables and outhouse.  There are a few hangars here, and several cars parked there with out-of-state license plates.  I got the idea that those cars are left here by folks who like to fly up here for a weekend "get away" from the cities down south of here.  My cousin knows the guy who owns and maintains the airport.  It was about 10:40 AM Eastern Time when I was ready for takeoff.  I had packed a couple of ham sandwiches for lunch while flying over Michigan.

After flying the 146 nautical miles from Y77 in Northern Wisconsin to Iron Mountain, Michigan for fuel again, I headed East in the U.P. to a point near Manistique, Michigan to fly across the upper end of Lake Michigan at 13,500 feet MSL.  That is Garden Island near the center of the photo below with Saint James at the right.  In the distance is the Mackinac Straits where the U.P. and the "hand" of lower Michigan come close together and are joined only by the Mackinac toll bridge and Interstate Highway 75 which crosses the bridge.  US highways 23 and 31 also converge at the south end of the bridge.  US 23 goes all the way down to Jacksonville, Florida.  US 31 finds its southern end at Mobile, Alabama. 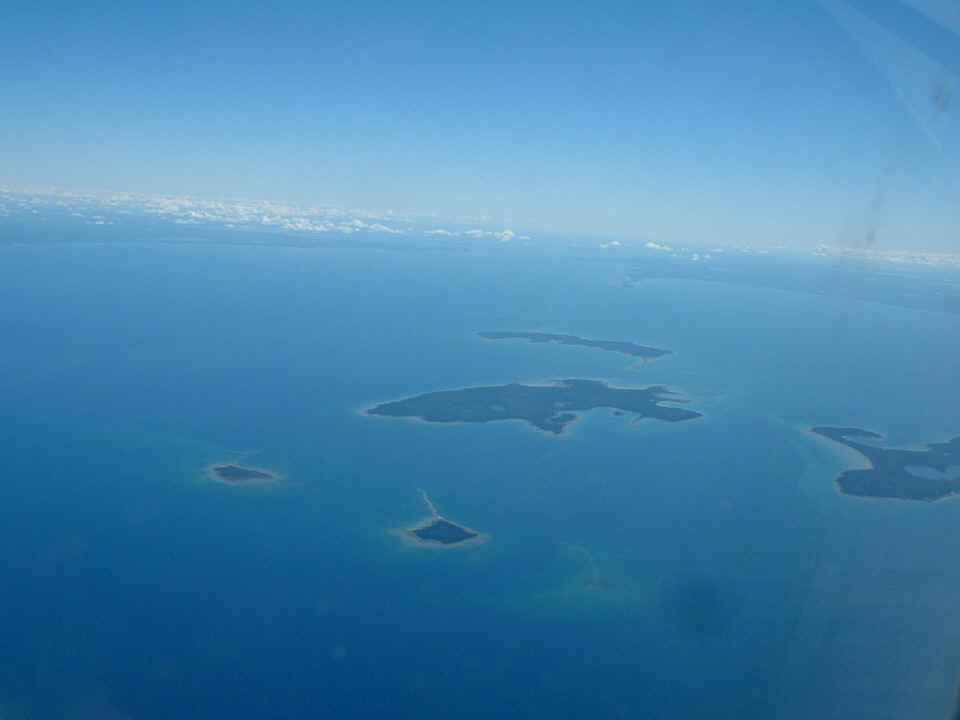 I finished the sandwiches over central Michigan and crossed a weak weather front near Lansing while still at 13, 500 feet.  By the time the Toledo airport passed beneath the wings, I needed a short comfort break and landed at Findlay, Ohio (KFDY).  When I got airborne again, I flew 25 miles to a place between Upper Sandusky and Marseilles, Ohio that I have visited on a number of occasions in the 1980's.  That farm house and the land around it belonged to my in-laws and the grand parents of my youngest son, Marshall.  The old barn was falling in back then and it has been cleared away and replaced by a new structure.  The farm house has an old log cabin that dates from the early 1800's at its center with additions on the north and south sides of it.  Earl Everett ran a nearby restaurant for many years and was still making great candy in his retirement years when I knew him.  He told great stories of being a young man in the 1920's and souped-up cars with a Liberty aircraft engine installed in an old Ford T-model.   The guy they passed driving a Stutz Bearcat finally caught up with them in the next town and wanted to see what they had under the hood.  Earl would smile with a twinkle in his eye when he told that story. 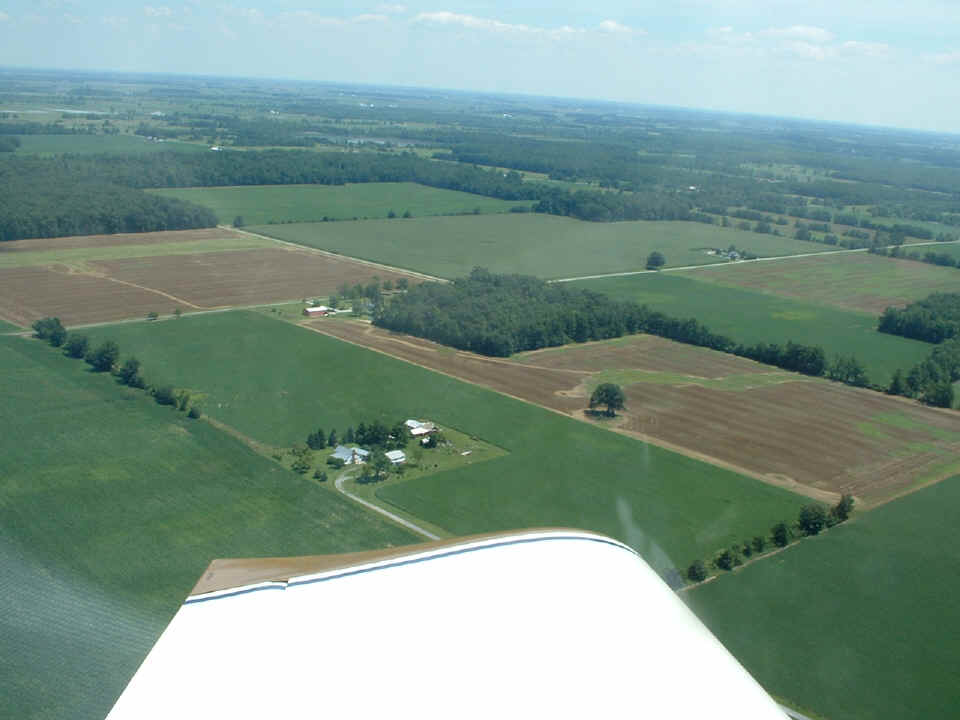 Not long after the farm was left behind, I landed at Miller Airport (4G3), 123 statute miles to the East, near Alliance, Ohio for some inexpensive 100-Low Lead fuel.  This airport is 561 nautical miles from where I started the day in Wisconsin.  The route I followed crossing Lake Michigan and sight-seeing at the farm was 787 statute miles, a bit longer than the straight-line distance of 561 nm.  The runway here is freshly-paved and the restaurant is being renovated.  The gas price was $2.75 a gallon and the owner pumped it himself!  I paid with my personal check which has been cashed as I write this on the evening of August 3rd.  They will be putting in a self-service credit card-operated pump soon. 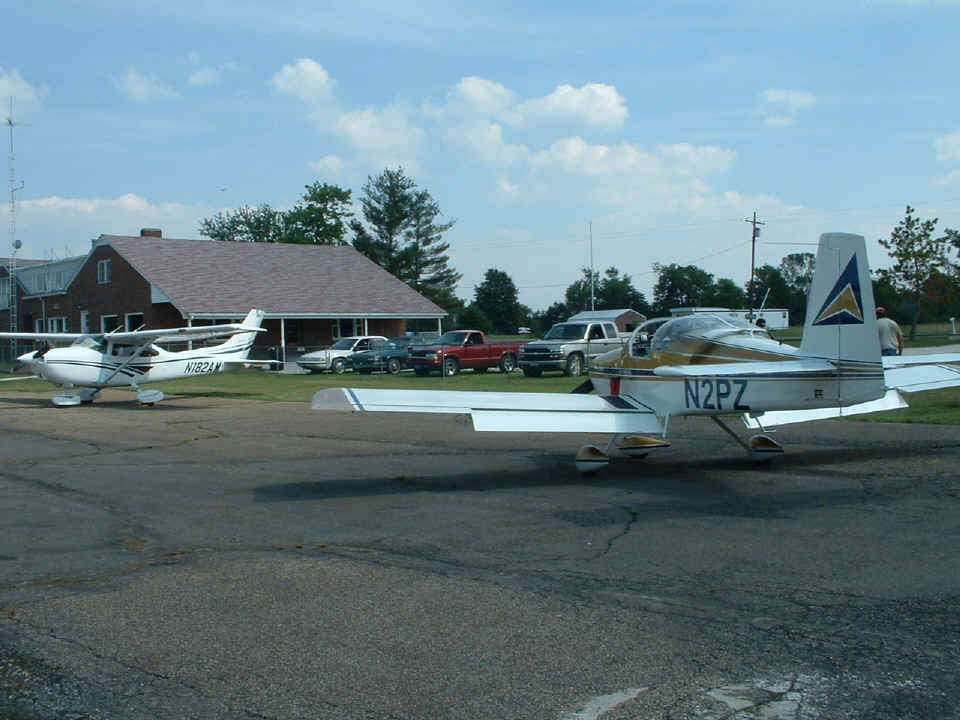 (March 30, 2010) I realized the flight from northern Wisconsin to New Jersey after my Oshkosh 2005 trip did not have a map overview of the 1,100 statute miles I flew on July 28, 2005.  Here is a map showing the waypoints I used on the flight that day, which was was about 7 hours of flying time plus two fuel stops at Iron Mountain, Michigan and at Miller Field near Alliance, Ohio. 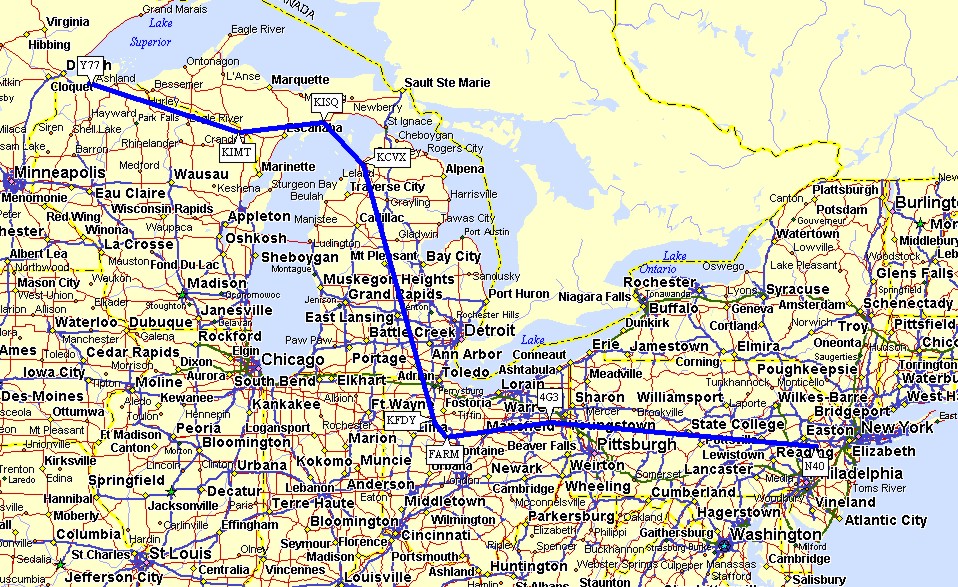 July 30, 2005:  Saturday morning and time for a trip to Rhode Island with my friend Dale in the right seat to see our former supervisor from a few years ago.  We hoped to get a flight up the Hudson River, but that did not work out in the morning. 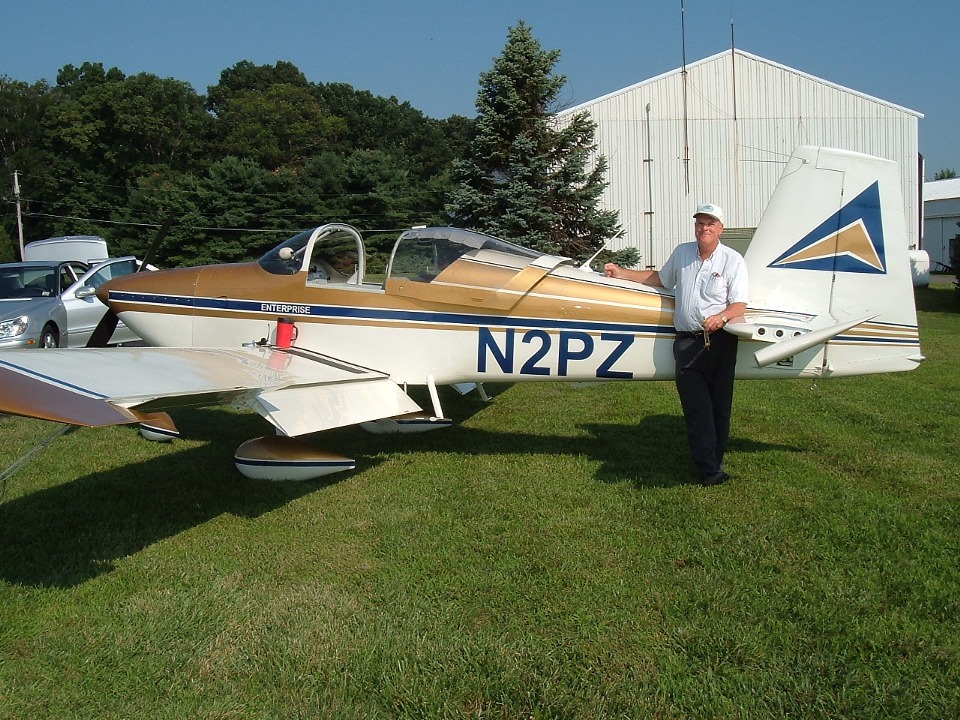 When the fog along the coast blocked our path, the choice was to stay inland and go around the west and north sides of the New York City class B airspace.  We crossed the Hudson River between the Tappan Zee Bridge and the Bear Mountain Bridge, passing directly over Stony Point, NY.  I spent much of the flight teaching Dale about the aeronautical charts and even showed him what a VOR station looked like when we flew past the SAX VOR near Sparta, NJ. 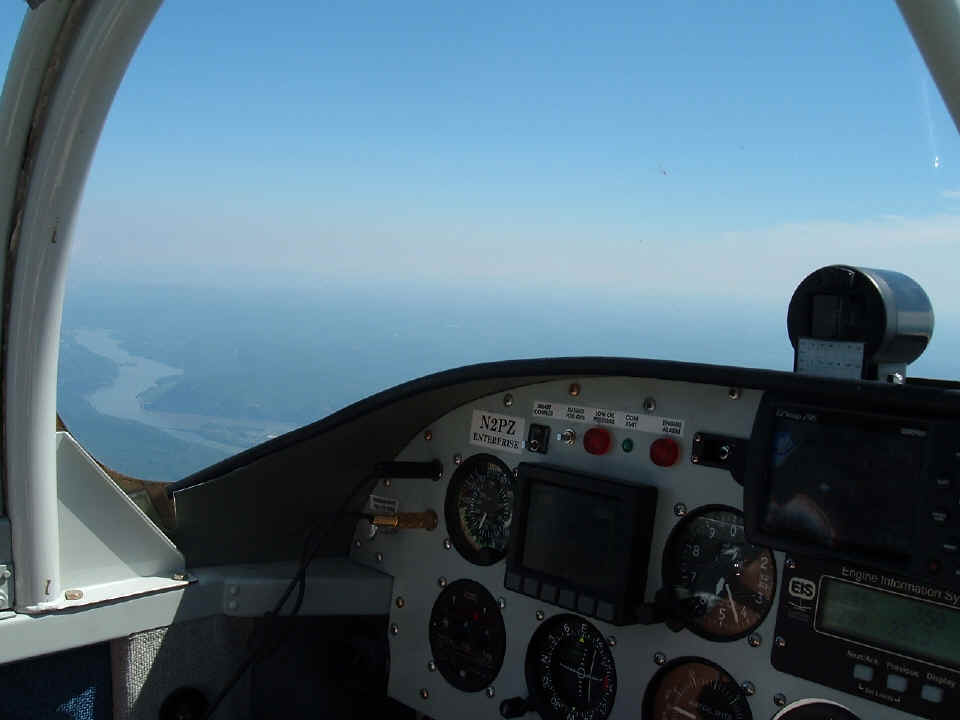 The Tappan Zee Bridge was visible on the right side of the airplane.  This heavy HAZE is why we went around NYC on the trip toward R.I. 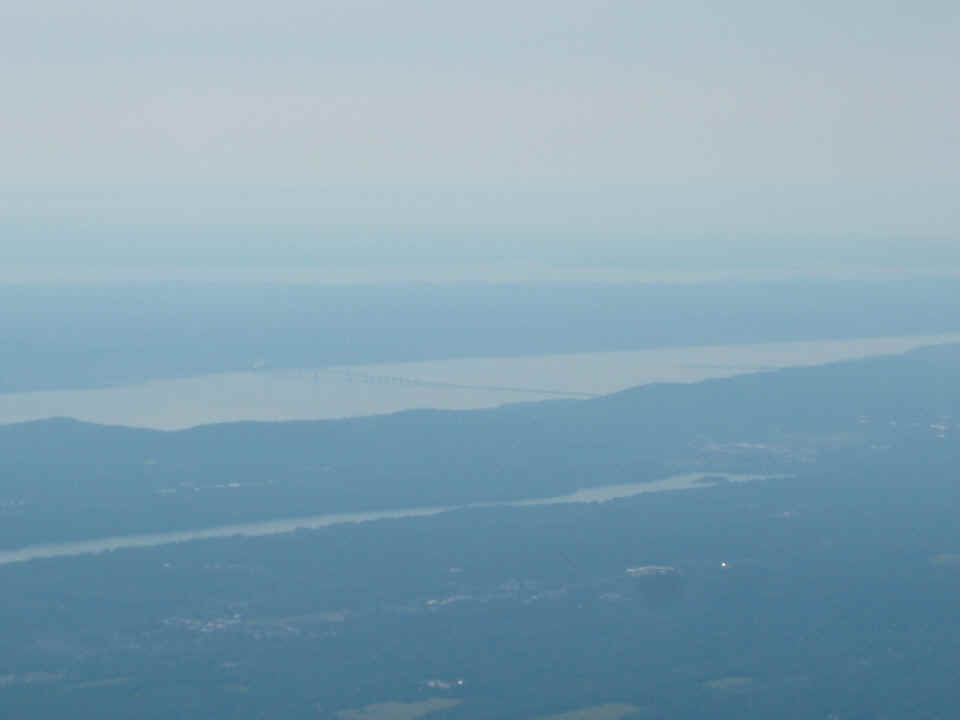