October 17, 2005:  Rodney took me back to the Hugo Airport and I said goodbye to him so he could get to work.  I finished my pre-flight preparations and spent almost an hour talking with the two guys that were in the FBO.  I learned about the Cessna Caravan freighter that stays parked on the ramp during the days at the airport.  It seems that airplane is used every night to carry UPS air freight from Oklahoma to Texas and back again each night.  We also talked about Van's airplanes, and the job that one of them had maintaining radio navigation aids in Oklahoma.  After topping off my fuel tanks, I headed East to do some sight-seeing before leaving the area.  I quickly realized I had a 20 MPH tailwind!

Speaking of where Rod works, here it is.  This coal-fired power plant is part of a rural power cooperative with connections to the grid in Oklahoma and Texas.   I left this photo full-sized to let you see the coal train that is unloading at the power plant.  The white building that straddles the railroad tracks near the left side of the photo is where the hopper cars dump their load.  The coal comes from mines in Wyoming. 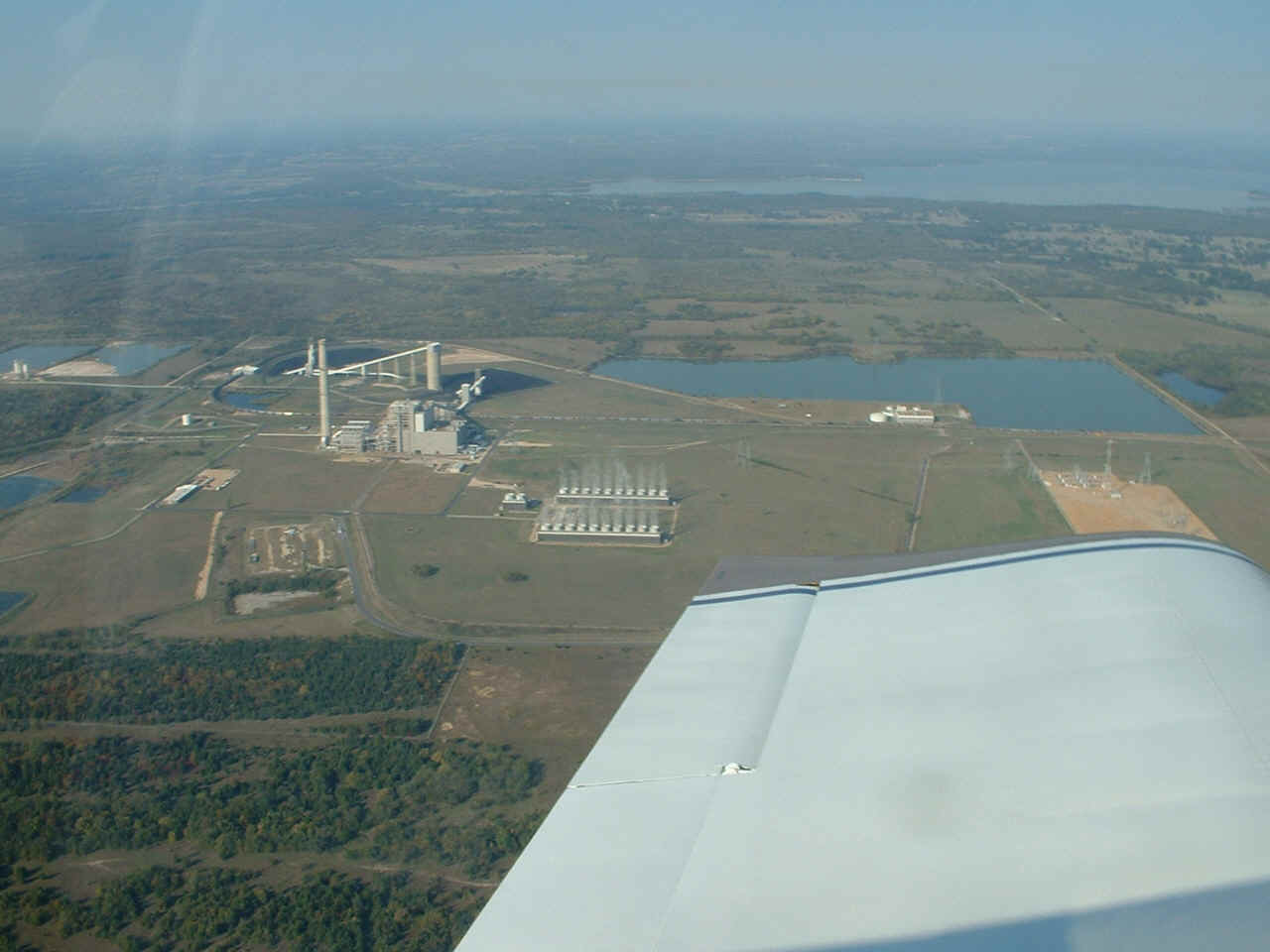 This photo shows a bit more detail of the train.  The locomotive is near the right side of the photo.  Be sure to pan this image to the right and look down at the highway that runs from the lower left corner of the photo to the right side of the photo.  That is US highway 70.  It will be widened to four lanes in the future.   The railway bridge across the highway is having an additional span added to it to make way for the westbound lanes of the highway when it becomes divided.  That railway bridge is part of a seven-mile long track built by the power company to another railroad junction.  The reason it was built was to have two railway companies competing for the coal transportation contract for the power plant. 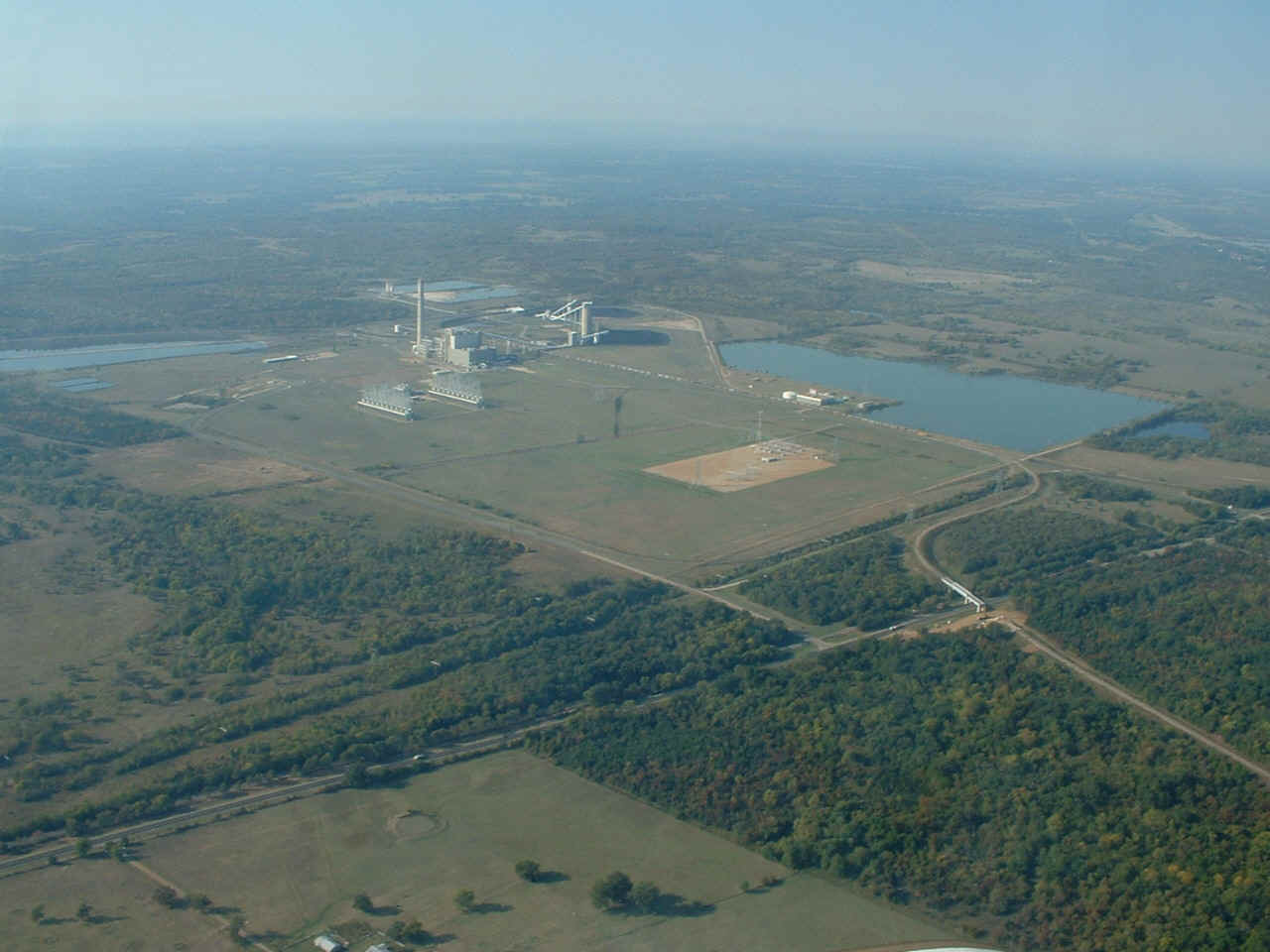 It was not long before I was out of Oklahoma and flying across Arkansas.   I watched DeQueen and Pine Bluff pass below my wings as I entered the Mississippi River delta country of Arkansas and into the state of Mississippi.  This series of photos were taken as I crossed the great river near Mellwood, Arkansas and Clarksdale, Mississippi.  This photo shows a portion of the river about 75 air miles south-southwest of Memphis, TN. 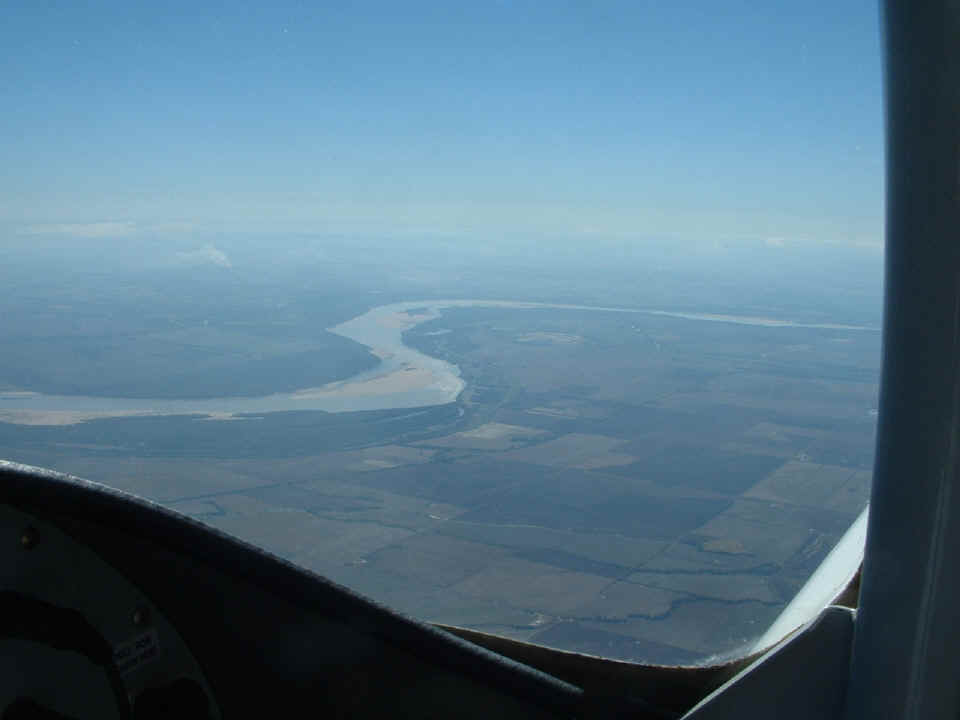 I got this shot of fertile farmlands on the left side of the airplane.   That highway curving through the center of the photo is Arkansas state route 44. 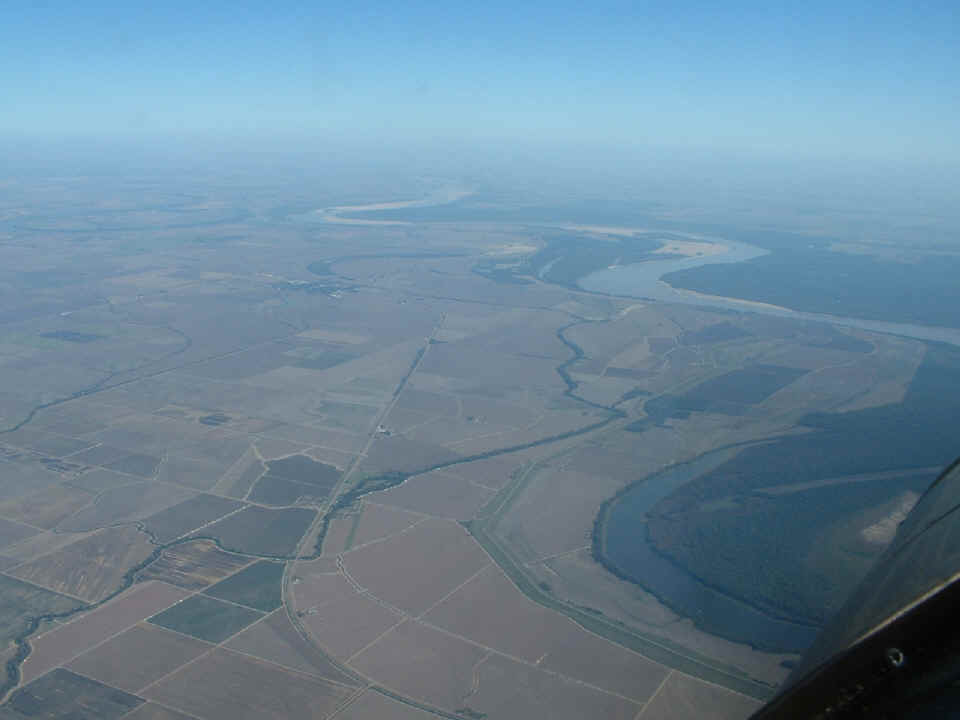 When I see the sand bars in and along the river banks, I think about Sam Clemens, a young river boat pilot in 19th century America.  He talked about how the river changed and how a river pilot needed to "know the river" as it changed with the seasons to insure safe passage of his boat and cargo.  That is still true for the river pilots today.  And for those of you who may not know the name Samuel Clemens, he is better known by is publishing name, Mark Twain.  That is the call made when boatmen would drop a weighted rope into the river to measure two fathoms of water or 12 feet.  That was enough to insure safe passage of flat-bottom river boats and barges. 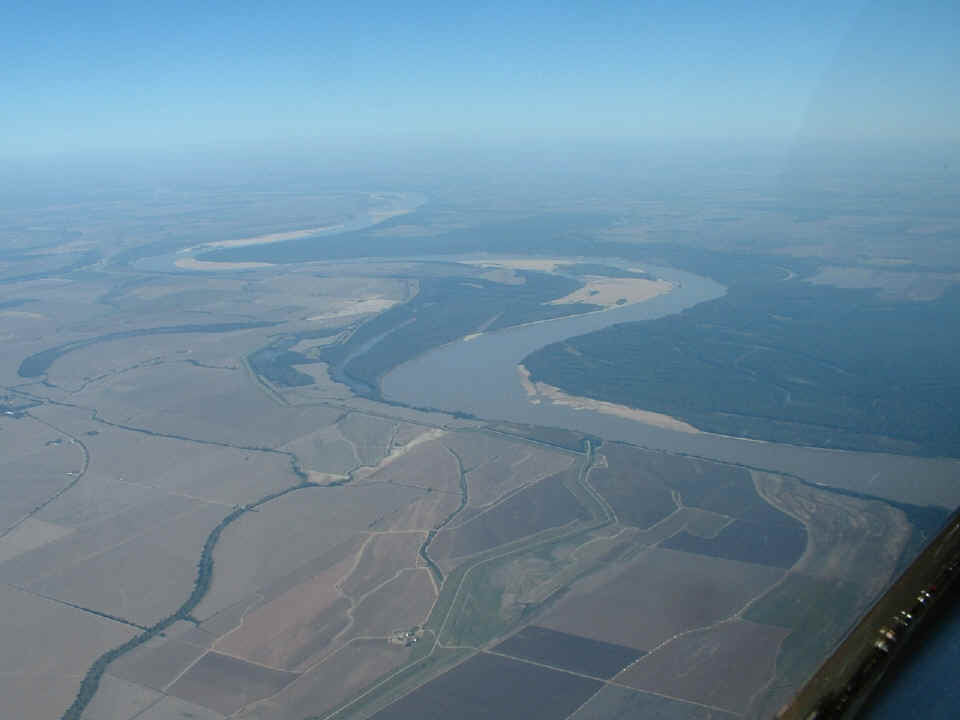 Life on the river is slow and easy with the current or against it.  I passed overhead with a ground speed over 180 MPH!  This picture is looking upstream toward Memphis and all points north. 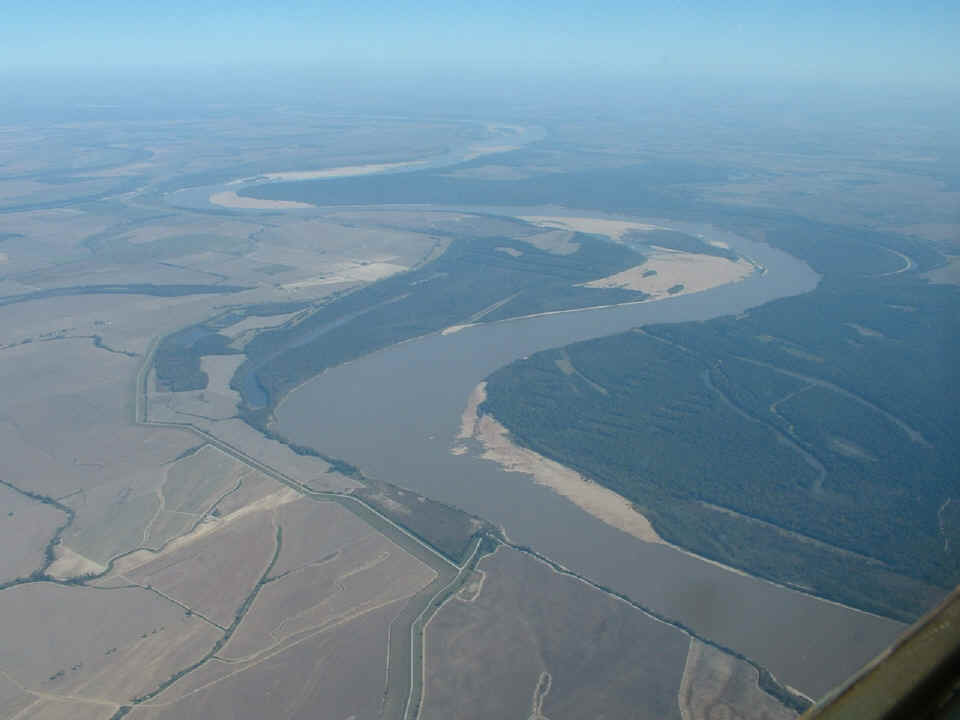 I had to change the batteries in my camera before I took the picture below.   That white spot near the center of the photo is a river tug boat pushing barges upstream. 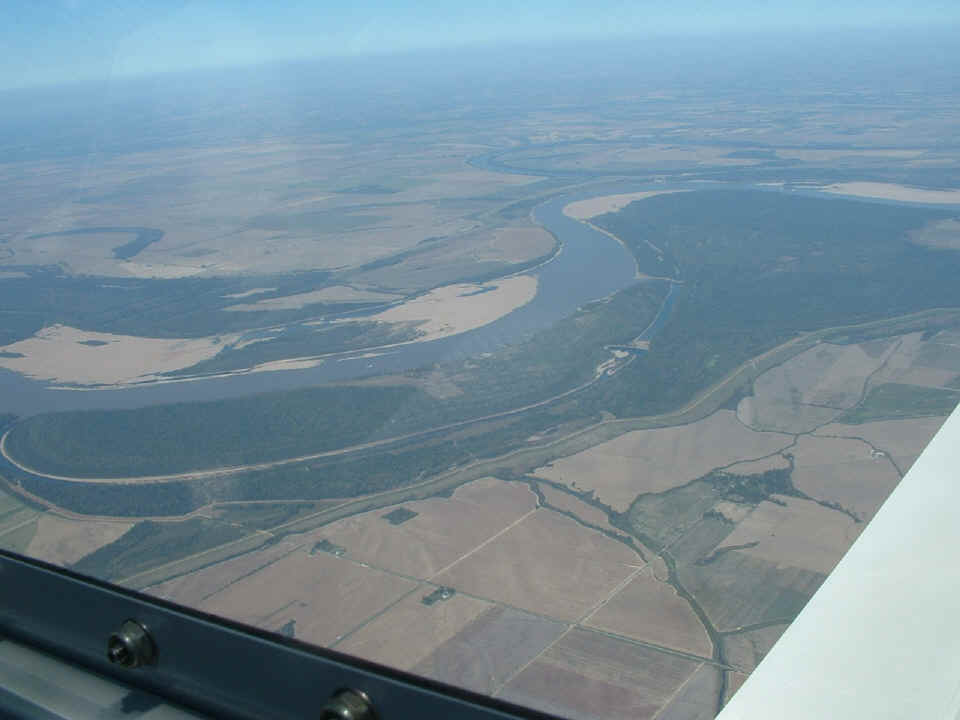