January 4, 2006: The ride home started with a departure from Lantana and along the shore line past the luxury homes and mansions of PALM   BEACH.  The West Palm Beach International Airport is visible in this photo taken at 9:35 AM, along with the former POST Estate, now owned by Donald Trump.  Yes, the folks who gave you Post breakfast cereals, and Emily Post ettiquette books built this palace in the early 20th century.  To make sure you are looking at the correct estate, look at the causeway and bridges coming from the mainland to the island of Palm Beach.  That is US 98 coming to the shore where it ends at Florida's East Coast state highway A1A.  As the bridge connects to the island, the estate to the RIGHT of US 98 at the leading edge of my wing is the POST Estate.  Trump calls it Maralago.  I am flying north along the beach at 500 feet above the water and about one-half mile off the beach.  It is a common clearance given by Palm Beach Approach controllers to avoid the air traffic arriving or departing from PBI airport seen near the center of this photo.  At 500 feet altitude and half a mile off the beach, most airplanes are high enough to glide to a forced landing on the beach if an engine quits.  The other clearance given here is 1000 feet and 1 mile off shore. 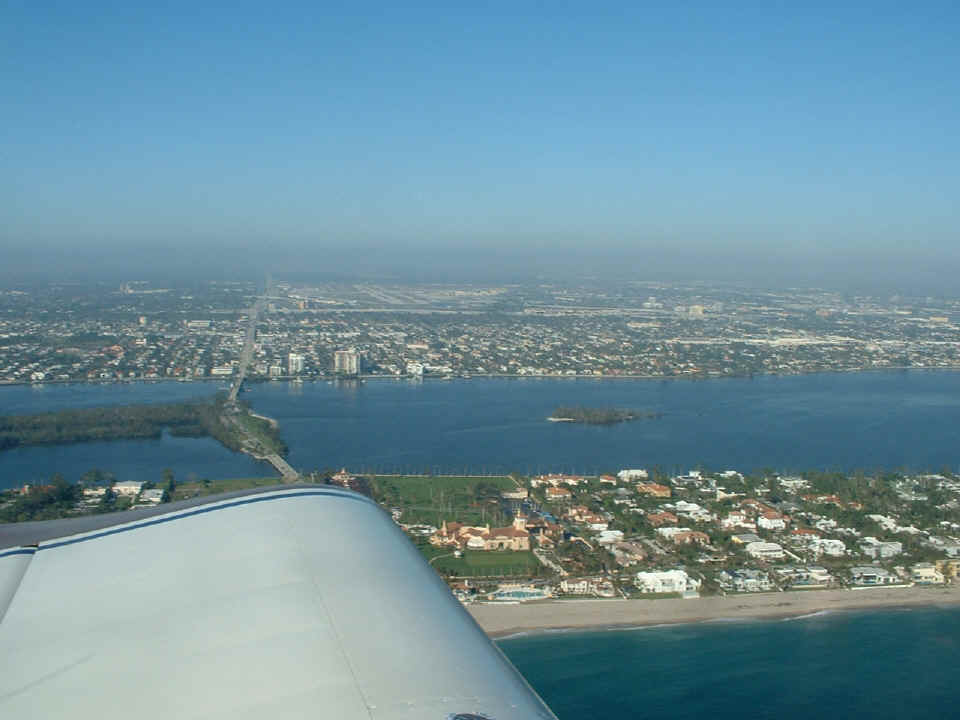 The next photo taken at 9:36 AM shows downtown West Palm Beach in the background and the downtown area of the city of PALM BEACH on the island at this end of the middle bridge from the mainland.  There are three bridges connecting Palm Beach Island with the mainland.  The north bridge is just beyond the right edge of this photo. 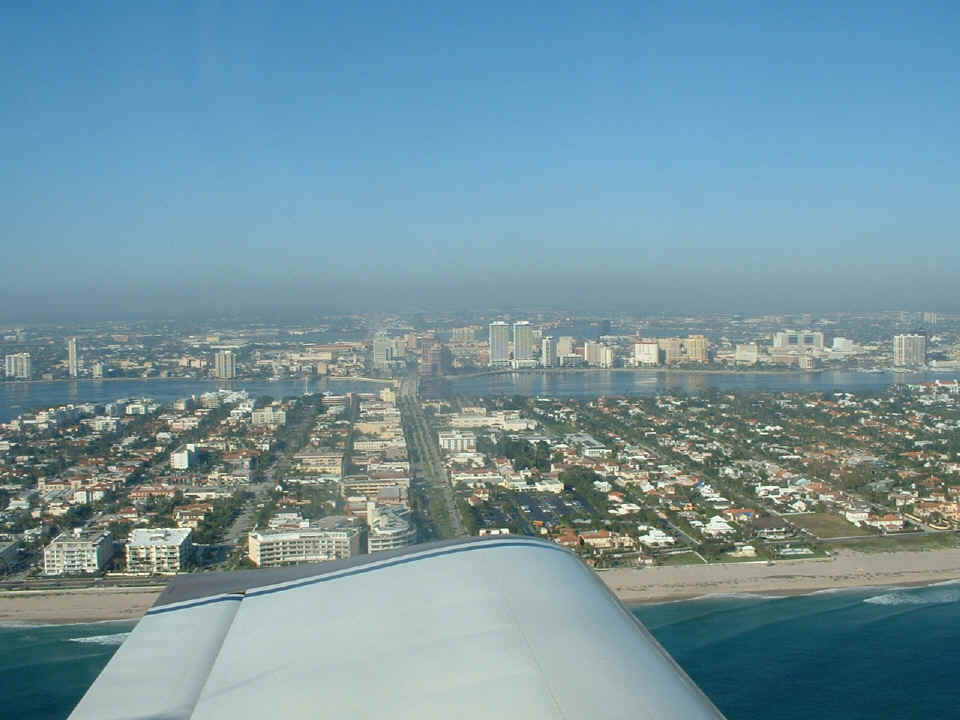 The place for luxury shopping in Hollywood, California is Rodeo Drive -- in Palm Beach, it is Worth Avenue which is not shown in this photo.  Worth Avenue is five blocks south of the main street that connects to the bridge from the mainland.  That street is Royal Palm Way.  It has a median strip that is planted with many very tall "royal palm" trees.  Well, at least they were there before Hurriane Wilma came through here last summer.  Many Banyan trees were also uprooted during that hurricane.

At 9:42 AM I passed this point near the north end of Palm Beach County at Jupiter Inlet with it's red light house.  A1A joins up with US 1 at the north end of Jupiter before the draw bridge that connects US 1 back onto the mainland going north.   The second bridge from the inlet is really two bridges side-by-side.  One is a drawbridge for the Florida East Coast Railway.  The other larger bridge has six lanes of traffic on it with the Alternate A1A highway on it.  The little bridge to the island at the right side of the photo is State Route 707 connecting from US 1 to Jupiter Island. 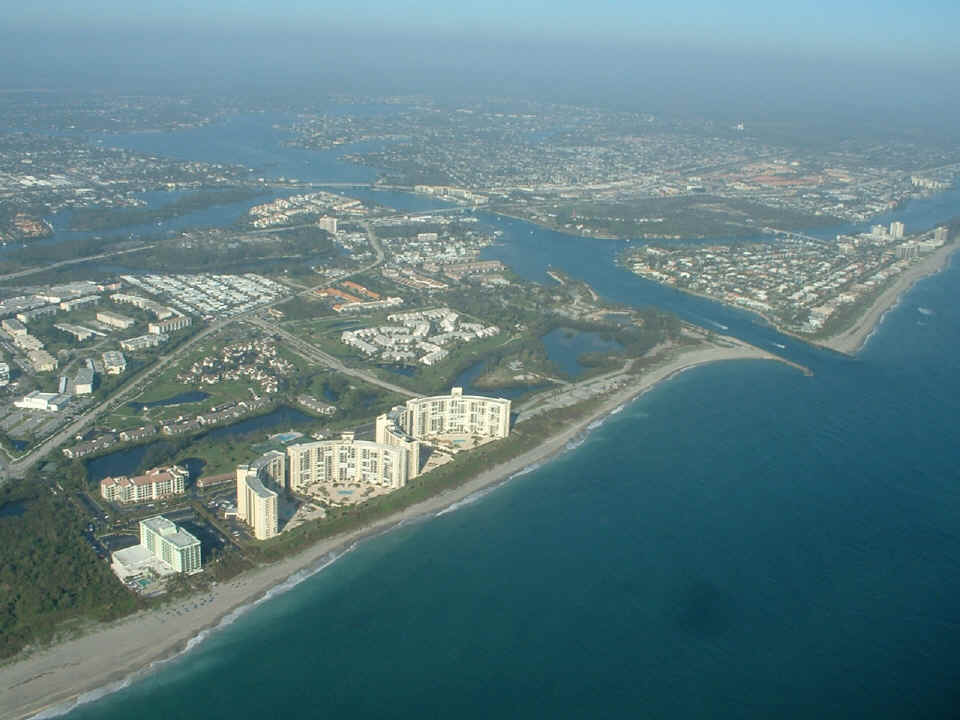 Look carefully in this shot to find the RED Jupiter Lighthouse located not too far from US 1 and the intracoastal waterway that exits to the right center of the photo going north.  You can also see the reflection of my instrument panel and switch breakers from the inside of the canopy.  DuBois park is on the South Side (left) of the inlet and Jupiter Island Colony is the housing area on the North Side (right) of the Jupiter Inlet. 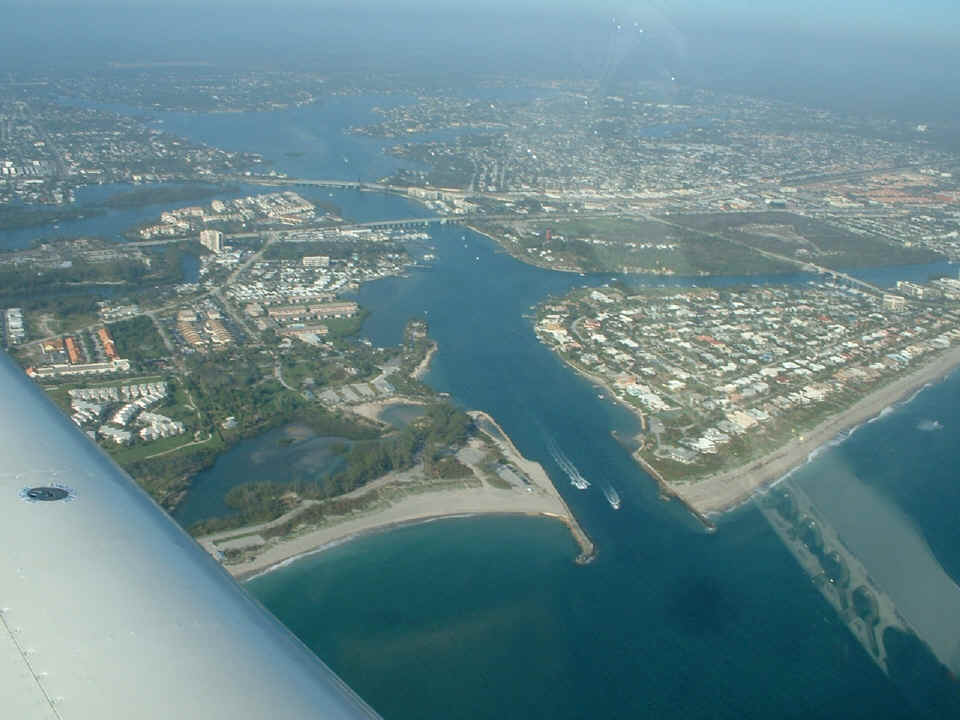 I flew a few miles up the coast to Witham Field (KSUA) at Stuart, Florida for another flight with my friend Monte.  We flew over to the area around Okeechobee Airport (KOBE) to allow Monte a better flying experience with my RV-9A.  We did a few clean stalls and coordinated turns during the one hour of easy flying before landing at Okeechobee.  I took this photo at 11:17 AM on the ramp near the fuel pumps there just before we had lunch in the airport restaurant. 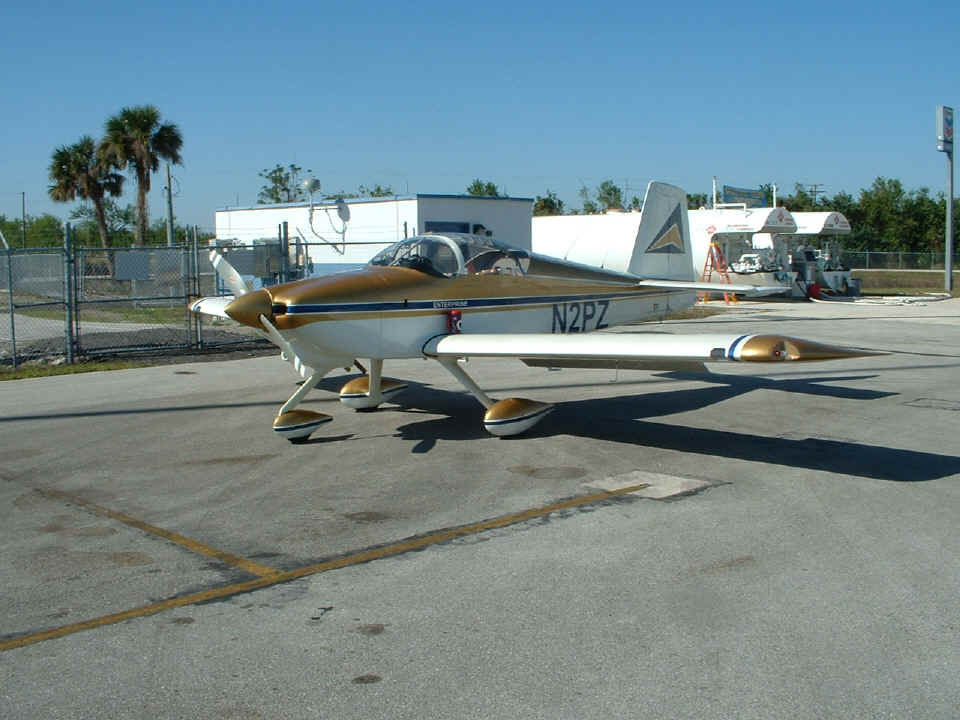 I took this photo of Monte at our table inside the restaurant located in the terminal building at the ramp.  The menu is varied and GOOD with daily specials.   The prices are reasonable and typical to a small southern town away from the big tourist cities of Florida. 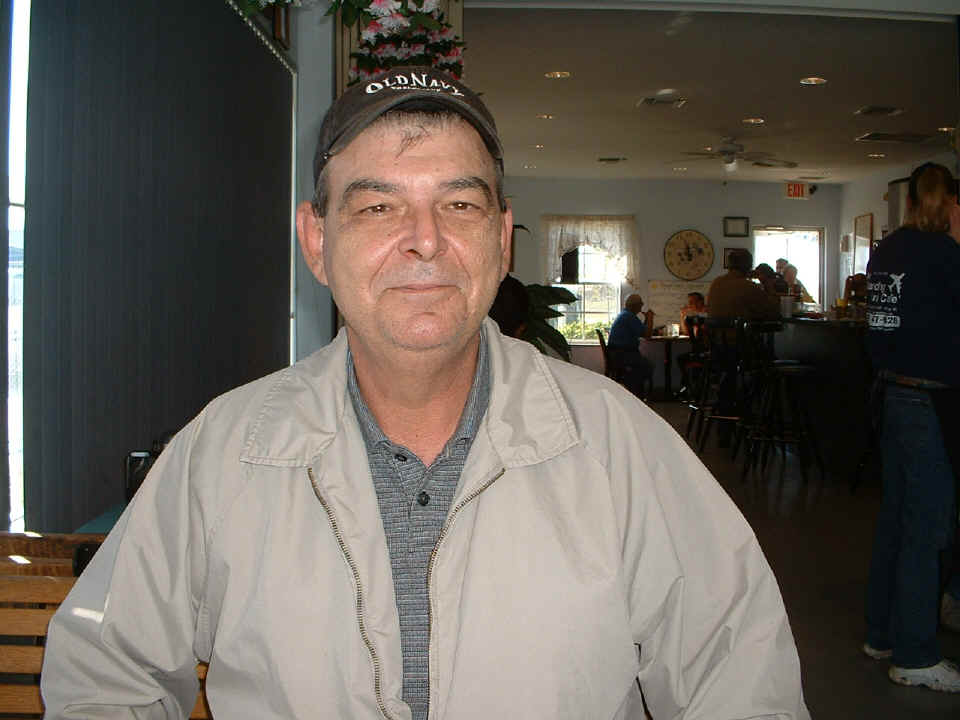 The next picture was taken after I blew my cup and the digital camera off the wing when we were ready to depart at 12:10 PM.  I sometimes put the cup on the wing as I get into my seat.  This time, I had left both the cup and the camera out there on the wing walk.  The propwash did its thing and I heard the familar "thud" as the cup rolled off the wing and bounced off the step.  I looked back to see the cup near the fence and the camera a few feet closer to where the plane had been parked.  I put the batteries back in it and took this photo to see what would happen.  The zoom lens is a bit more floppy now and this was the result.  I did not realize how bad this picture was until I got home last night.  (I am posting this on January 5th.) 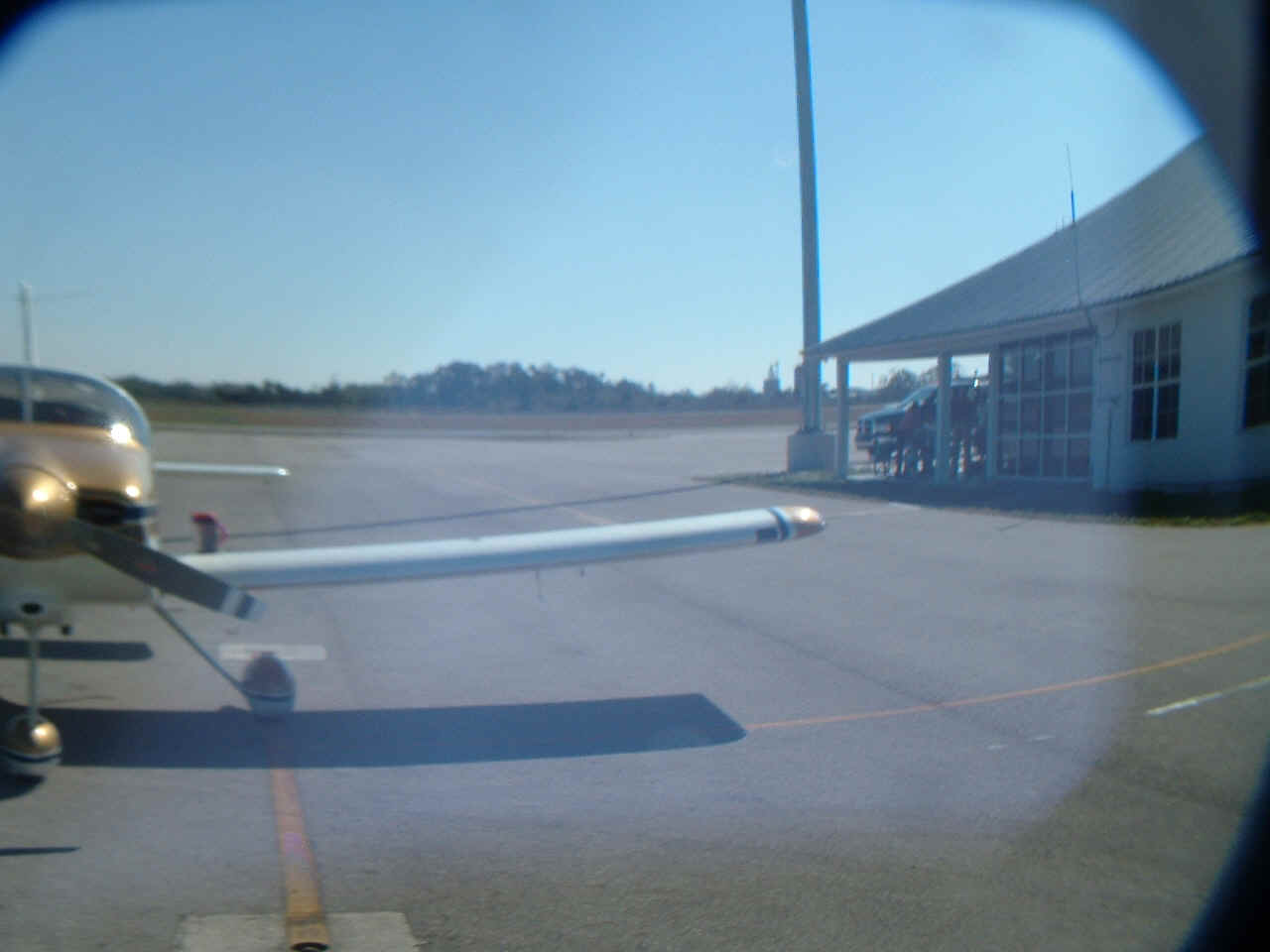 The next photo turned out all right.  Cycling the lens from stowed to extended usage position seems to have cleaned up the pictures, but I don't know how long that will last.  Cameras have gotten better and cheaper in the three years since I bought this one.  I think it may be time to get a new one.  The picture below was taken at 1:34 PM from an altitude of 4,500 feet MSL over Melbourne, Florida looking toward Patrick Air Force Base on the barrier island.  That long thin island with the causeway running across it is the south end of Merritt Island.  Cape Canaveral is under the thin white cloud layer seen in front of the horizon. 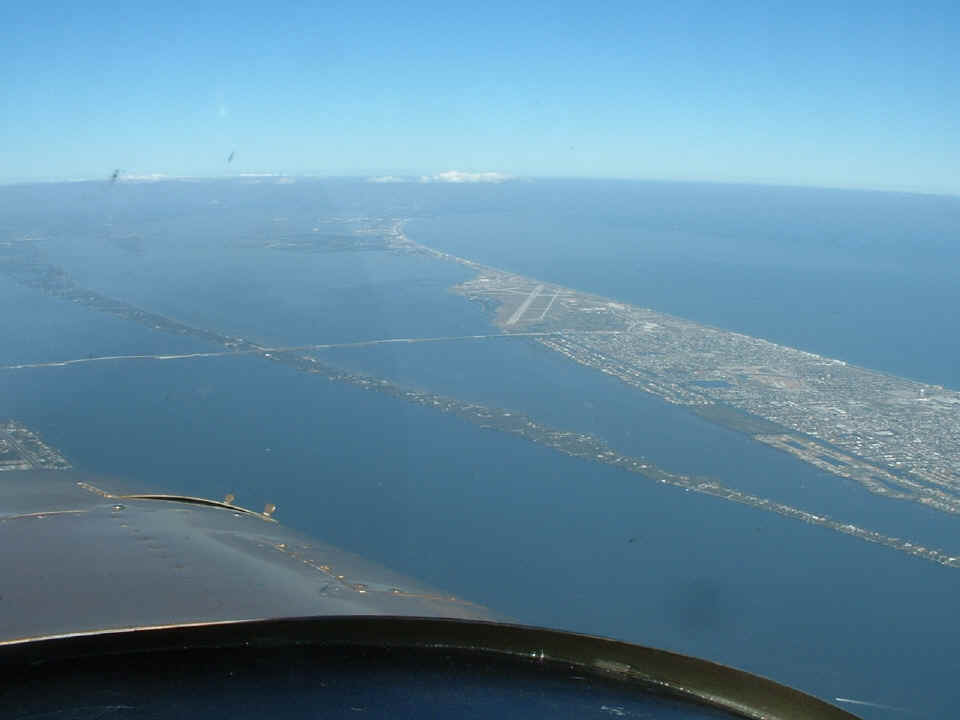 Since I was flying low to avoid the headwinds, I was using flight following after I headed up the coast from Stuart.  Miami Center handed me off to Daytona Approach as I neared Melbourne.  I have another photo of Daytona to show you on PAGE 204.