January 4, 2006: I took this panel shot at 1:35 PM, immediately after the photo you saw at the bottom of the previous page.  The GPS 296 map shows the land out the window you saw before.  North is basically UP since I am on a heading of 347 degrees.  I flew about 30 minutes from Okeechobee to Stuart, and then about 35 minutes to get here.  The fuel gauge shows about 30 gallons remaining at this point.  The headwinds at 4,500 feet amount to about 10 MPH.  I tried 6,500 briefly and lost another 10 MPH to headwinds, so I came back to 4,500 for this part of the trip.  I flew all the way to Oshkosh last summer with 10 MPH headwinds, I figured I could tough it out a while on this trip.  Don't be fooled by what you see on the Dynon compared to the GPS 296.  The INDICATED air speed on the Dynon is 145 MPH, while the fine print showing TRUE airspeed is on the right side of the Dynon D-10A and reads 157 MPH.  The 296 is showing 146 MPH ground speed, indicating a difference of 11 MPH, which is the headwind component at this altitude of 4,440 feet. 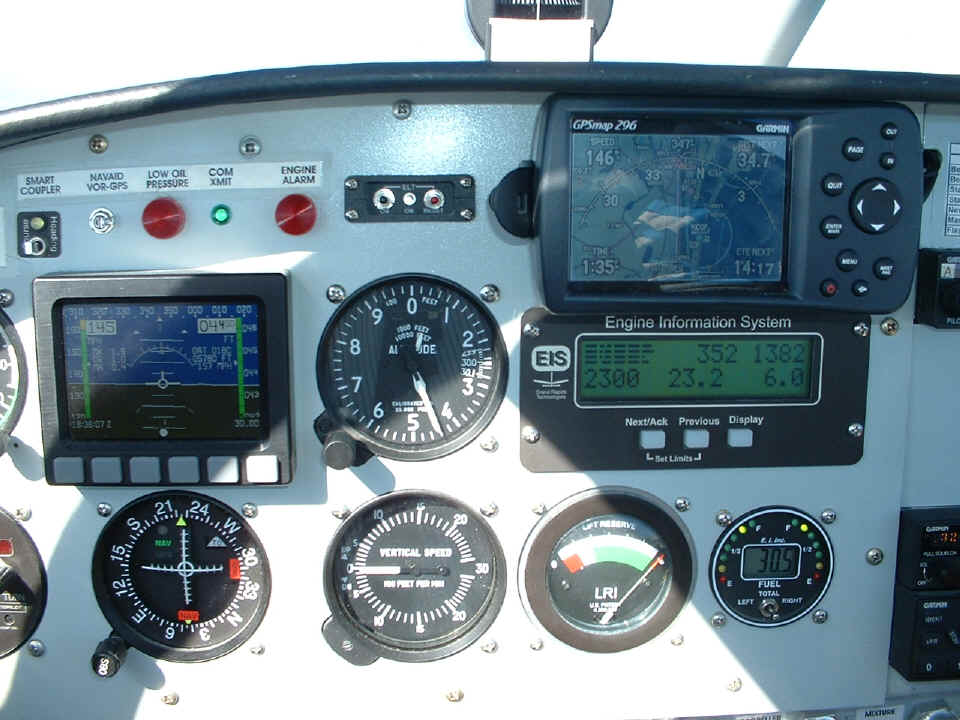 In the last of three pictures taken over Melbourne, the view ahead is of the intracoastal waterway (Indian River) and US 1 running along the river front toward Titusville, Florida.  Interstate 95 is the highway running from the lower left corner toward the horizon near the center of the picture. 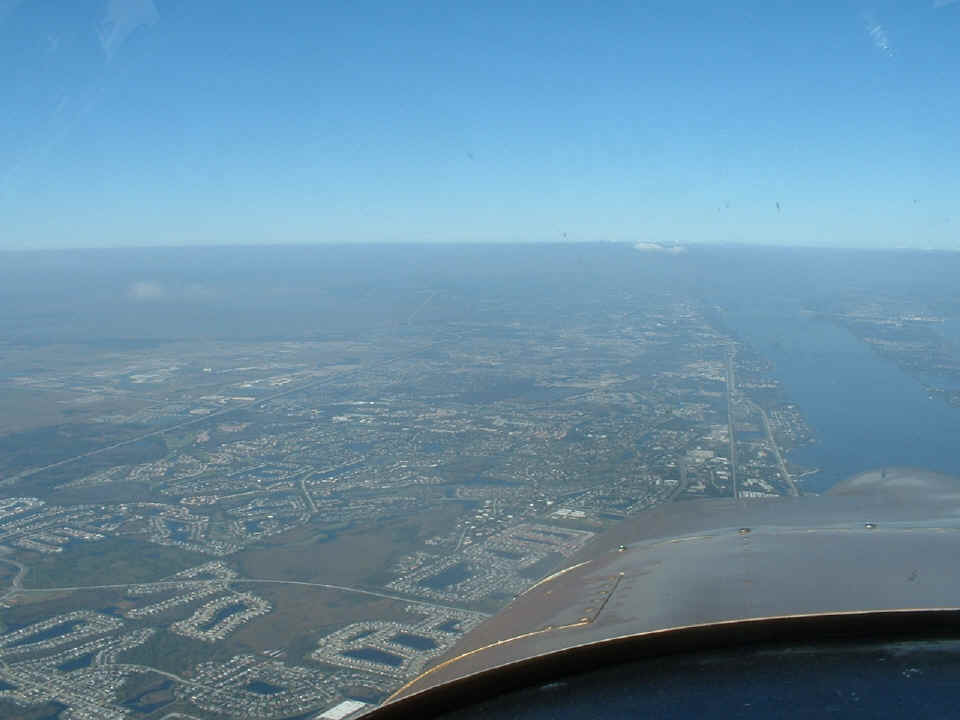 A second Daytona Approach controller worked me from the Kennedy Space Center to the south side of Daytona Beach.  It was the same drill as last Friday, don't violate the restricted air space over KSC, and don't go into the Orlando Class B airspace west of I-95 - - stay on the Victor THREE airway.  I took this photo at 2:04 PM from 4,500 feet looking at the airport and Daytona International Raceway.  I-95 is the big highway running parallel to the coast line on this side of the airport.  Interstate 4 is the highway coming in from the left side of the photo joining I-95 just below the airport.   The few clouds seen down by Stuart and up to the Melbourne area have now dissipated as I flew north.  There is just a haze remaining below 4,000 feet. 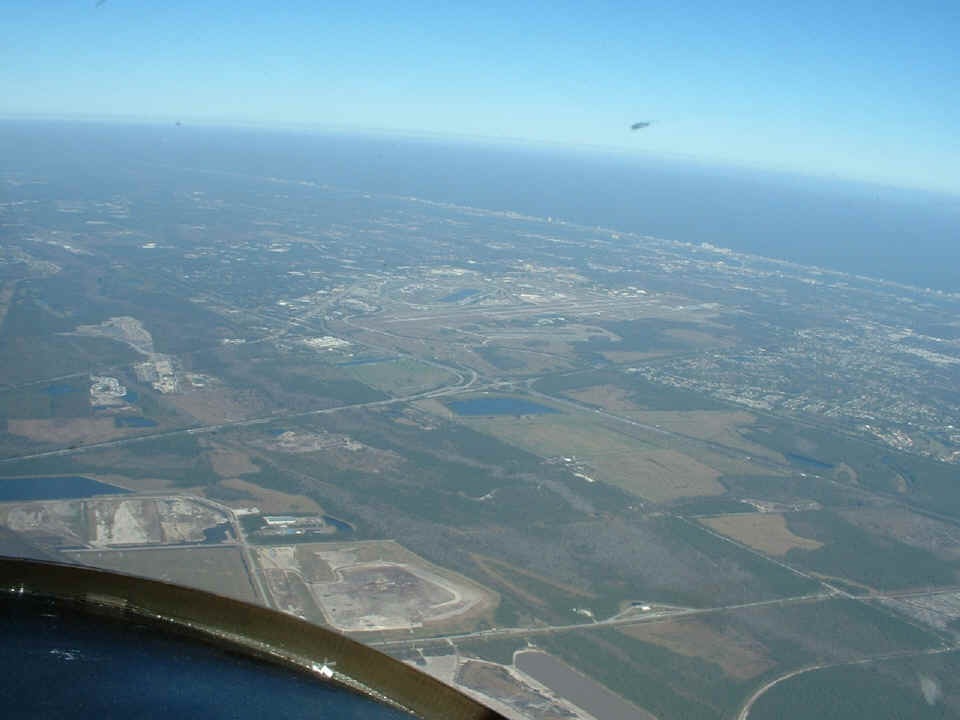 By the time I reached Saint Augustine, the headwinds at 4,500 feet had picked up to 15 MPH.  I asked the first Jacksonville Approach controller for 3,500 feet and was cleared lower to escape some of the headwind.  That put me above the various airports with Class D airspace, so I only had to talk to JAX approach.  I got back to a 10 MPH headwind as I approached Jacksonville at 2:39 PM going north directly for the airport at Alma, Georgia.  Alma has good AVGAS prices and I wanted to be sure I had plenty of fuel for the ride home, not to mention a comfort break at Alma. 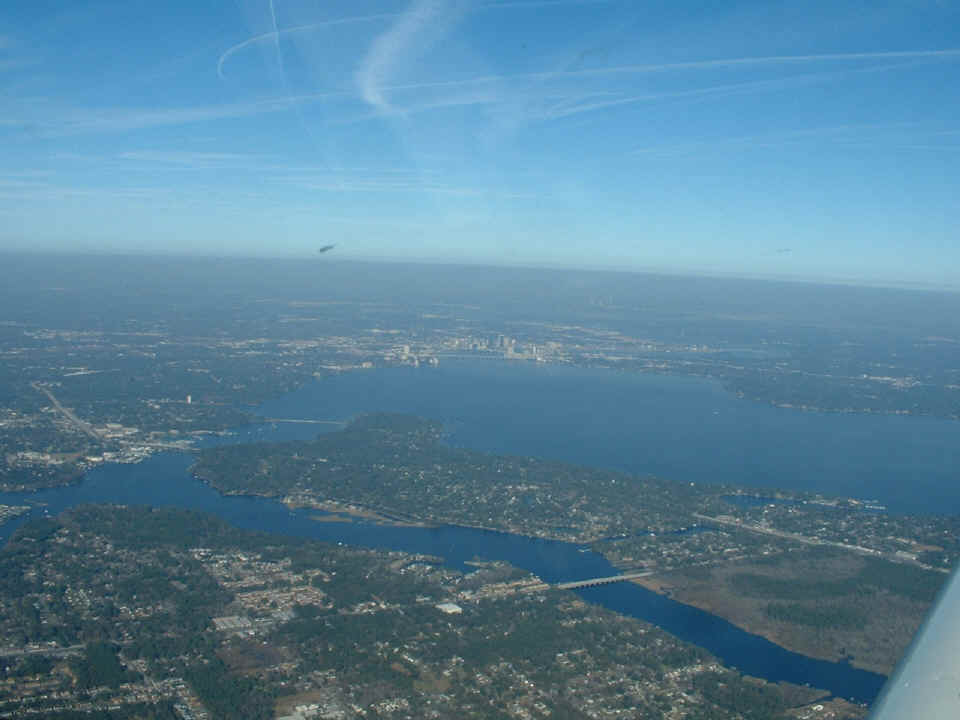 I made a straight-in approach at Alma to save time.  My GPS estimated time for arrival back home was getting close to sunset.  A Baron pilot was finishing his run-up before departure when I announced my approach on the COM radio to this uncontrolled airport.  He called to say he would hold short at the north end of the runway as I landed downwind from the south end.   With 5,000 feet of runway, I was not worried about a 5 MPH tailwind during my landing.  I took this photo at 3:36 PM after filling the tanks and just before departing Alma. 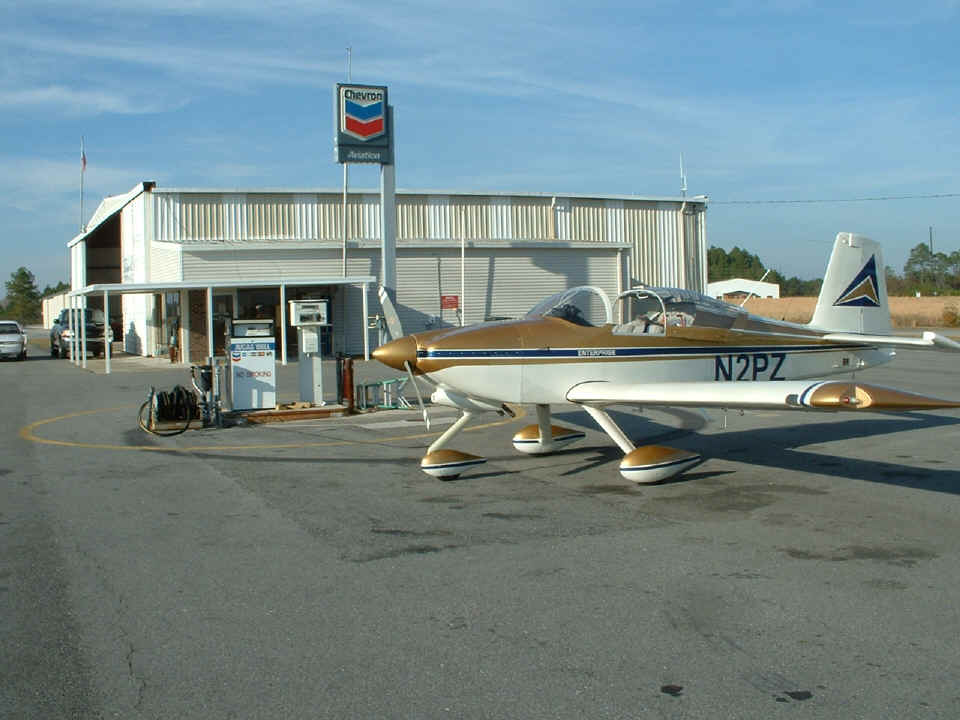 I took off into to the wind from Alma since I was near the north end of the runway.  A quick turn to the north after takeoff and I was on my way toward home.   I climbed to 2,500 feet and realized I had no headwind.  When I reached 3,000 feet, I got into the headwind and went back down to get my ground speed up to the 160 MPH airspeed I was making.  I would occasionally find a tail wind of 5 to 10 MPH.   It was not long before the Dublin airport passed beneath my wings again.   Since I was down low to avoid the headwinds, I would make a radio call as I approached and pass over or near the airports going north to my next waypoint, the airport at Winder, Georgia.  The name of the town is pronounced "wine-der" by the locals.

I was flying low enough that I needed to avoid tall towers and these smoke stacks at the Georgia Power Company generating plant just north of Milledgeville, Georgia.   The Baldwin County Airport (KMLJ) is seen just over the nose of the airplane along the shore of Lake Sinclair.  The runway is just beyond that row of white buildings (hangars?).  I took this photo at 4:26 PM. 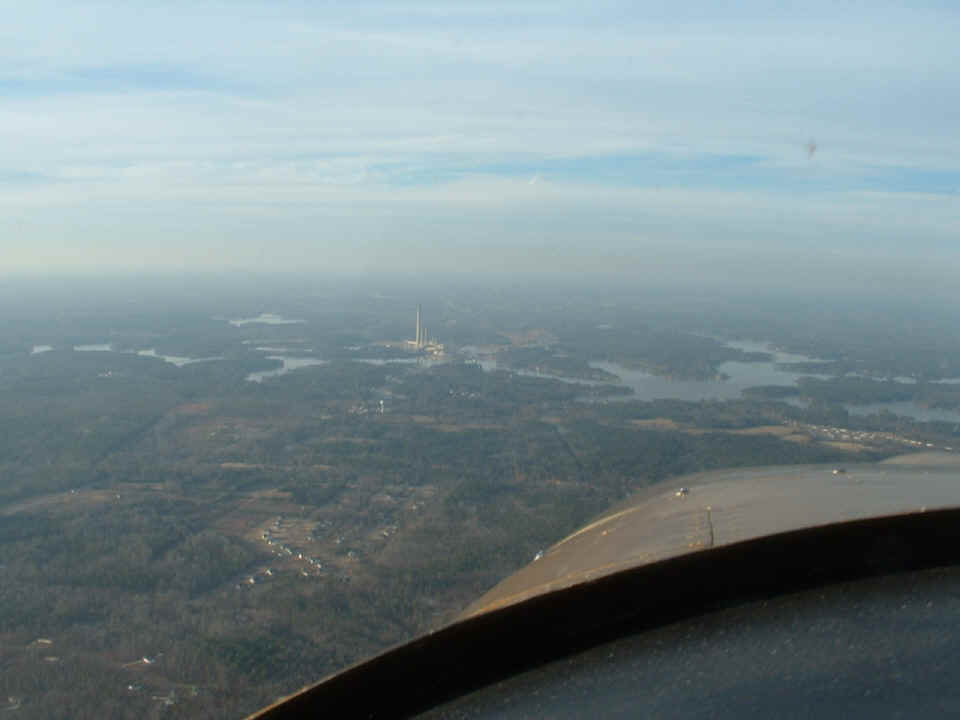 All the flying I did while I was in South Florida is shown in this map with my GPS ground track overlay. 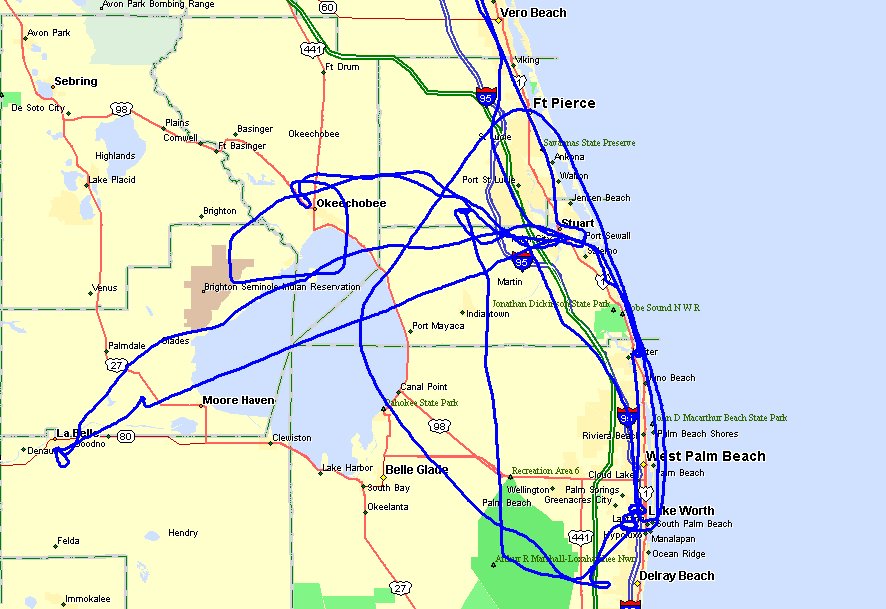 Here is the big picture of the whole trip which totaled just over 2,049 miles including the local flights in South Florida.  Just to put things into scale, the RED DOT on the map hides a 17-mile flight from Folks Field to the Collegedale Airport where I filled the fuel tanks before my departure on Friday, December 30th.  My return to Folks Field on January 4th is the lower BLUE trace below the RED dot.  The GPS and autopilot kept the cruising flight paths very close to each other going north and south from Winder to South Florida.  You can see how far EAST my route went to avoid the Atlanta Class B airspace at 11,500 feet MSL on my way south.  I reversed the flight plan in the GPS and used it on the way home.  I did not need to be that far to the EAST at the low alititude I used coming back home.  It was nice not to have to thread through the Atlanta airspace below the Class B rings and the other planes and airports located there. 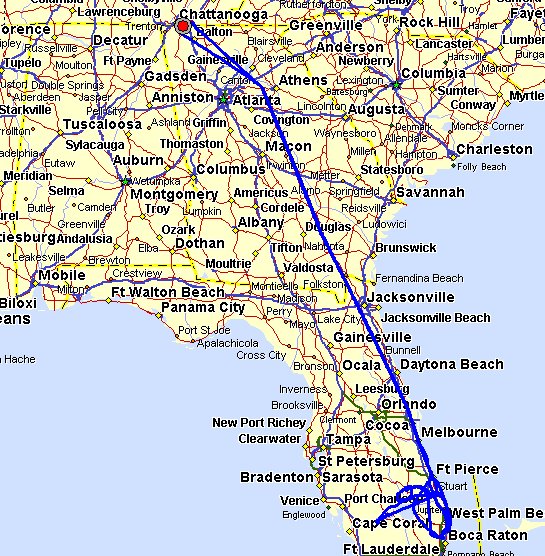 I did not take any pictures as I flew over the airport at Winder, Georgia.   I also did not take any mountain pictures north of the airport at Jasper, Georgia or Dalton, Georgia.  I was only concerned with getting home before sunset.  It was 5:33 PM when I touched down at Folks Field.  Sunset was about 10 minutes after that arrival.  Wendell came out to meet me at the hangar and commented that I was three minutes late from the 5:30 PM ETA I had given him in a phone call from the previous day after I cancelled due to the weather.  The Hobbs meter had 153.9 hours total time on it when I put the airplane in the hangar Wednesday.

I went out to the Collegedale Airport to buy a case of AeroShell 100 Plus oil today, Thursday, January 5th.  I also helped Wendell understand the assembly of some of the next parts of the fuselage interior, then I cleaned the bugs off the airplane before heading home around 5:30 PM today -- one day after returning from my Florida New Year's flying trip.

I received an email the other day from an RV-builder "wannabe" who has always wanted to learn to fly.  He may show up this weekend to see my airplane and how Van's Aircraft kits are assembled.  I will post pictures from that meeting if it occurs as planned.

Oh yes, one more thing - - Monte called tonight.  He may want me to come back to Florida next week for a mission to help out a friend of his with a one-way flight to the Gwinnett County Airport where I recently had lunch with my son and my sister before Christmas.  Weather permitting, I may have something to show you next week IF that quick trip happens.