January 27, 2006: My period of unemployment ends this weekend with a new career move on Monday, January 30th.  I have made my travel plans for the first two weeks of this new job and will be posting updates when there are suitable photos to share.  Virginia is where I go first, then to California for more product familiarization and training.  No travels via RV for these first two weeks on the job, but it looks as if I will be able to use the airplane for business travels in the coming months.  The weather forecast is looking bad in Virginia for the first part of next week, so the RV will remain in the hangar and I will drive up Interstate 81 to my destination.  The trip to California in the following week will be via airport shuttle bus to Nashville and the scheduled airlines. It will require 12 hours of land and air travel time to get me to Sacramento.  After that, another few hours in a rental car will be needed to get to my final destination.  There may be a future trip to California via the RV-9A.  I have done some preliminary flight planning and discovered that I can get there in about the same amount of time consumed riding the shuttle bus and the airlines.  It is a long story that will wait for a future posting, but not today.

I have a few new photos posted to Wendell's RV-8 quick-build project on THIS PAGE.  Wendell has some other things that will keep him busy and away from the airplane project while I am away from home next week.   I have reviewed the next steps ahead to aid him if he gets some time to work on the fuselage.  More details about that are on his latest page of the OTHER RV section of this web site.

January 30, 2006: I left home this morning in my car, not the RV-9A.  I drove from Chattanooga to Blacksburg, Virginia to begin orientation on the new job with the national sales manager of Olson Technology.  I took a few minutes to look over the local airport (KBCB) since it was along the way to my appointment.  I discovered overnight tie-down at the airport is inexpensive.  The flight here would have been two hours instead of the 4.5 hours I drove today.  The weather was true to the forecast with overcast skies most of the ride up here, and rain arriving this evening.  A mix of rain and snow is expected tomorrow morning with clear and cold tomorrow night.  Wednesday clear, and rain again on Thursday.  Now you know why I brought the car and left the plane in the hangar today.  My return home is expected to be on Thursday of course.  Future trips up this way will probably be "day trips" thanks to the nimble RV-9A.

Much of the conversation this afternoon about the job was familiar stuff since I have been in the cable and satellite communications industry for over 34 years.   The next two days will be spent learning about the various families of Olson products, and the online software I will be using with others in the company.  The next few months are going to be interesting as I "get up to speed" and begin to feel at home with a new group of folks.  I am excited and ready to get with it!   So, family, friends, and newcomers - - this is how I feel on the evening after my first day on a new job.

February 4, 2006: I had three days on the road this past week as part of the new job.  I have been getting things in order before a second week of business travels, this time to the foothills of the Sierra mountain range in California.  I am getting some things packed for a VERY EARLY departure on Sunday morning.  The modes of travel begin at 3:30 AM Eastern time with a 2 hour 15 minute van ride (shuttle) to the Bradley Airport in Nashville, Tennessee.   Since Southwest Airlines flies there, many fares from there are priced very LOW!   The savings compared to a Chattanooga departure far exceed the round trip shuttle bus fare.  Two planes later, I should arrive in Sacramento, California around 3 PM Eastern time.  After that, bag claim, car rental counter, and a 2.5 hour ride to my destination.  The total travel time could reach 15 hours.  At least I can sleep on the long, non-stop ride from Atlanta to California.

I have some new pictures to post on Wendell's RV-8 project, but no time to do it now.  When the dust settles after my ride to California, I hope to update Wendell's photo pages and put in some new text about what happened this afternoon before coming home to do laundry and pack before heading to California.

February 5, 2006:  Here I am at 34,000 feet in the back of a Delta Airlines Boeing 737-800 "Shuttle" configured airplane.  It has power outlets at every seat and I thought I would get out the computer and update my web pages with the new photos taken at Wendell's shop yesterday.  You can see those photos on his NEW PAGE 14 in the OTHER RV section of this web site.

As I write this, the airplane is over Missouri heading west at approximately 425 MPH ground speed.  The headwinds out of Atlanta were bad during the climb to altitude.  I would guess the route today came this far north to take advantage of favorable winds across the major portion of the route to Sacramento.  It appears that we will be passing north of Kansas City shortly.  The cloud layer below is broken right now.  I should be able to get a photo or two that may be of interest shortly.   The captain indicated we will be passing near Salt Lake City.

As you have read above, I was indeed on that van to the Nashville Airport arriving well ahead of my flight time.  The MD-88 departed Nashville on time at 7 AM Eastern Time for Atlanta.  I got up at 2:10 AM and had a sausage and egg biscuit, plus a bowl of cereal with a banana at home.  I was hungry again by 8 AM while I was in the B concourse at Atlanta.  At that time of day, breakfast was the "choice" for a meal.  Delta provided a foil snack bag with some crackers, smoked Gouda cheese, a bag of granola mix, and a short bread cookie.  The red cup is filled with ice and water and I am lucky enough to have a row of three seats to myself to spread out my bag, the computer, and my legs as I lean against the outer wall and occasionally look out at the passing scenery.  The GPS 296 has been reunited with its small quad-helix antenna for use to track the flight progress from time to time.   Although I am sitting in the back of this bird, I can at least "participate" in this trip using the GPS to stay informed.

The real irony of this trip is the route due to the winds aloft.  Think of this time line a bit, especially if you are a pilot.  All times are given in EASTERN TIME to minimize the confusion of jumping back and forth across time zones.  At the end of this posting, I will tell you how long it took to reach my destination via the airlines and ground transportation.
1.  Departed East Ridge on the shuttle van at 3:30 AM.
2.  Arrived Nashville Airport at 5:45 AM and checked my bag.
3.  The Delta flight to Atlanta departed at 7:00 AM.
4.  Delta flight 583 pushed back from gate B-34 at 9:28 AM.
5.  Takeoff from Atlanta was at 9:55 AM.
6.  The flight north out of Atlanta crossed just to the East of Chattanooga and turned toward Nashville.
7.  We passed over Nashville around 10:30 AM.
8.  The 737 passed the St. Joseph VOR (STJ) at 11:48 AM.  The GPS indicates 444 MPH ground speed.
9.  The pilot said we would be about ten minutes late due to the headwinds and our route of flight.
10.  The VOR for North Platte, Nebraska was crossed at 12:30 PM with a course change and a ground speed of 470 MPH.
11.  Denver passed off the left wing at 12:57 PM with just over 900 miles to go to Sacramento at 460 MPH ground speed.

The cloud cover abated as we started to cross the Rocky Mountains.  The turbulence started at the same time and lasted about 15 minutes.  I took this picture with a view toward the mountains and discovered just how many water droplets were on the inner surface of the pressure window. 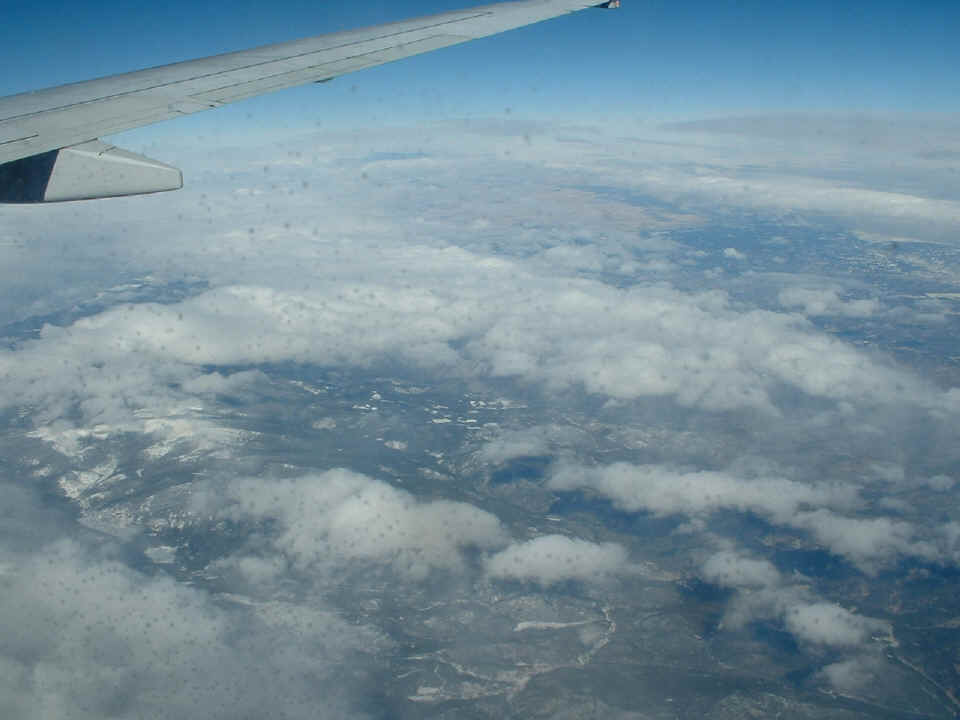 This second shot was taken looking through the TOP portion of the window and it suffered from only a smear, also unreachable from my side of the inner plexiglass (Lexan?) window.  The smear is actually a water drop stain on the OUTSIDE of the pressure window.  You can see it in front of my view of the top side of the wing.  And yes, there is snow in places on the mountains down there. 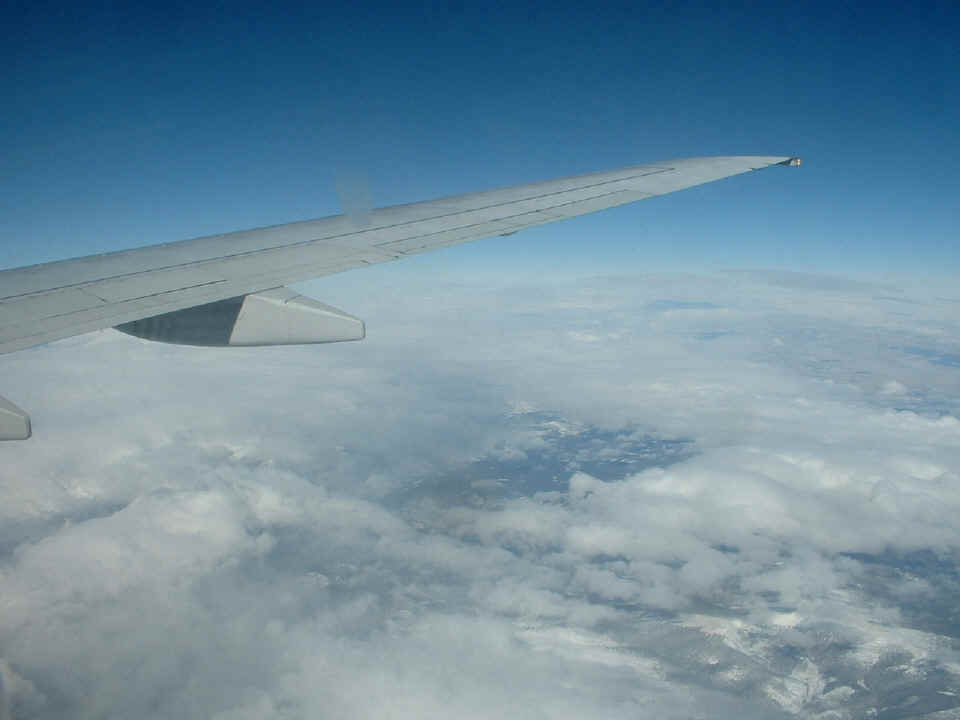 At about 1:30 PM, the Utah state line passed below the airplane with another climb to around 38,000 feet.  It is smoother up here and the view has improved as you can see below.  That is the White River on the right side of the airplane looking down close in to our route of flight. 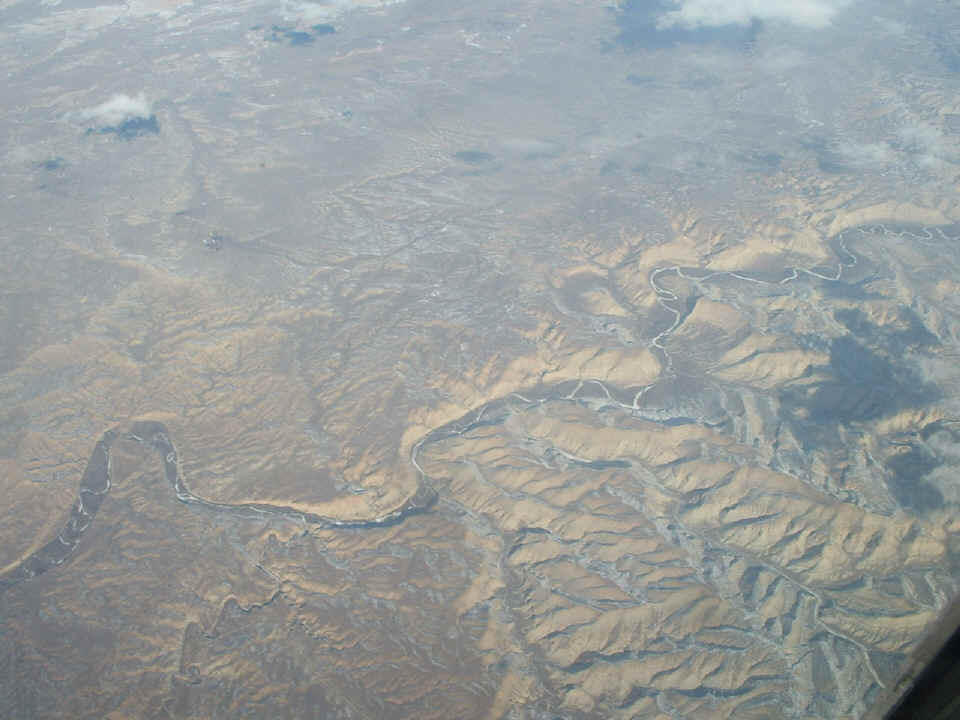 The sights kept coming one after another.  This is the small town of Delta, Utah near the left side of the shot.  There is an airport down there just about centered in the photo.  It has two runways in a V-shape with the point of the V pointing toward the bottom right corner of the photo. 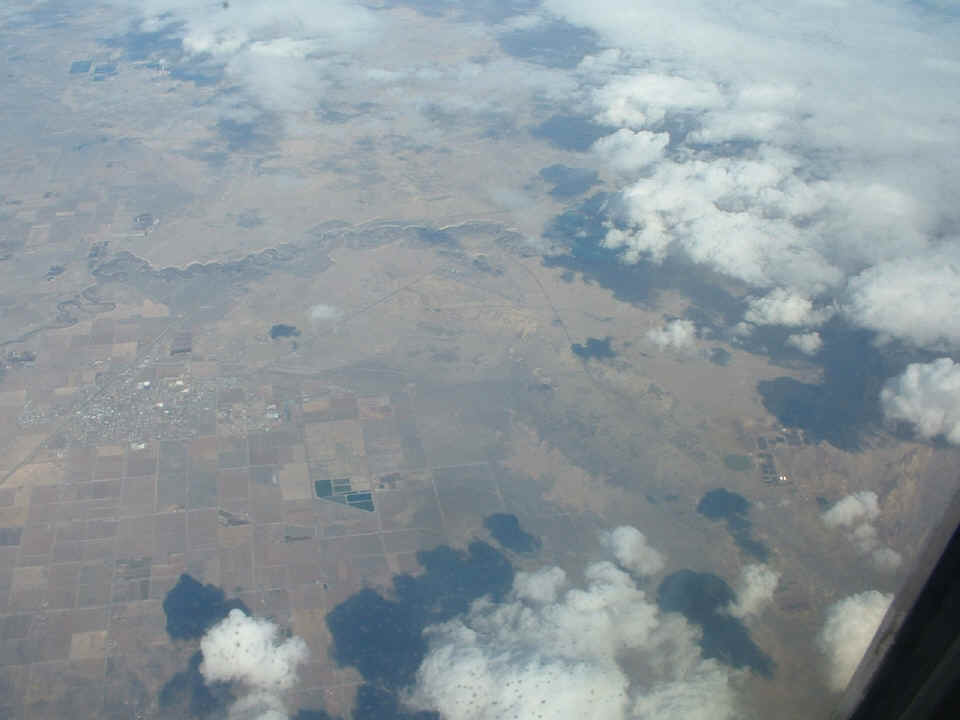 Snow-capped mountain peaks in the distance beyond a desert floor. 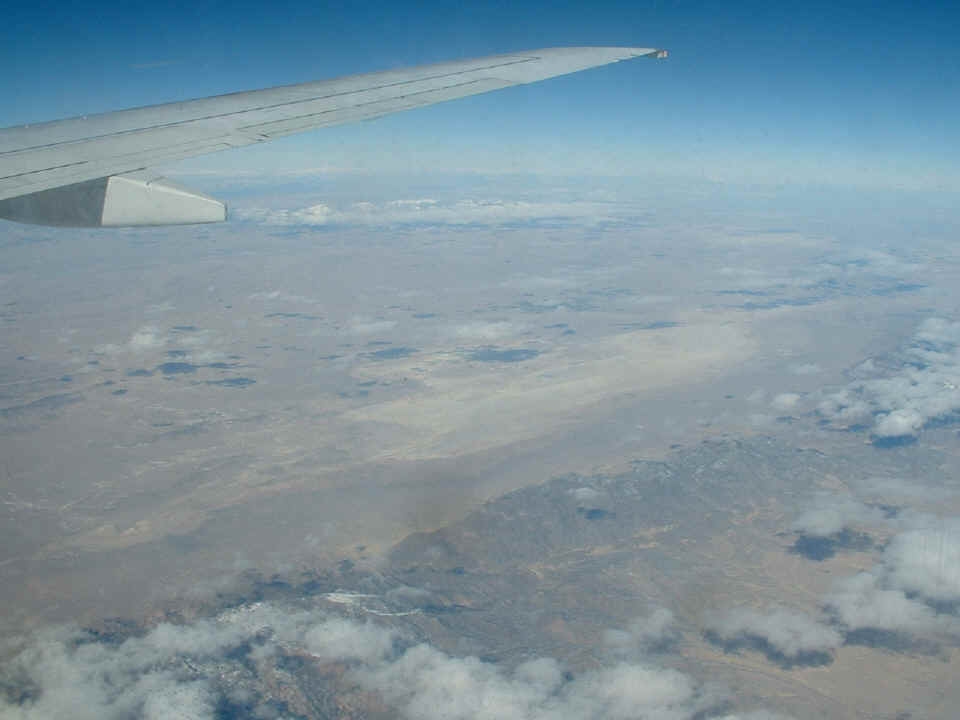 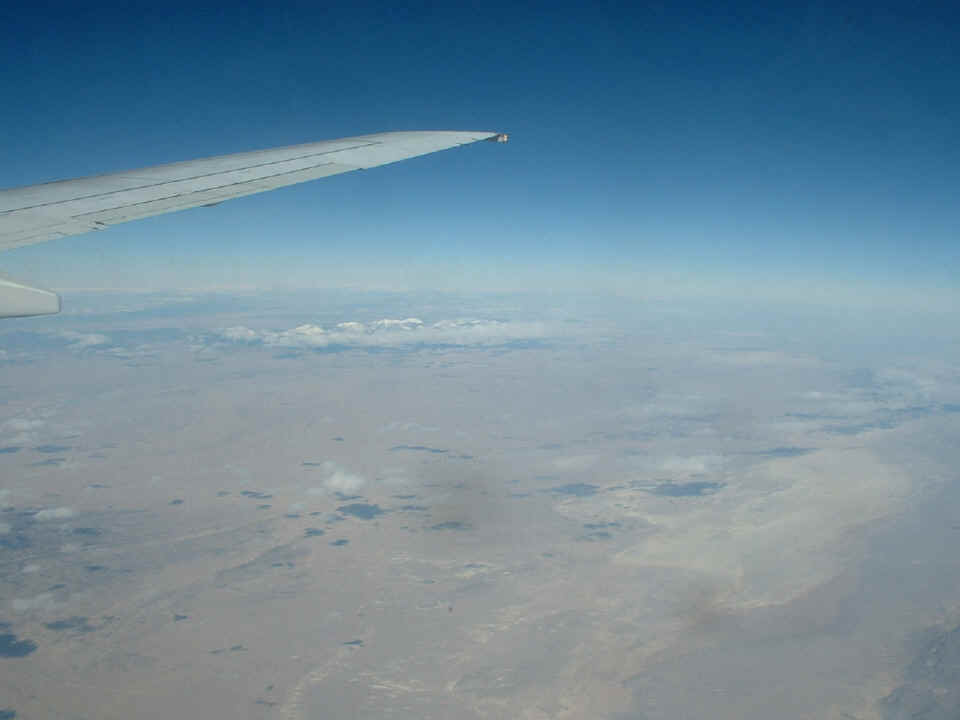 Looking down near the airplane from the two photos above, one can see a lonely stretch of US highway 6.  This location is about two miles west of the UTAH/NEVADA state line. 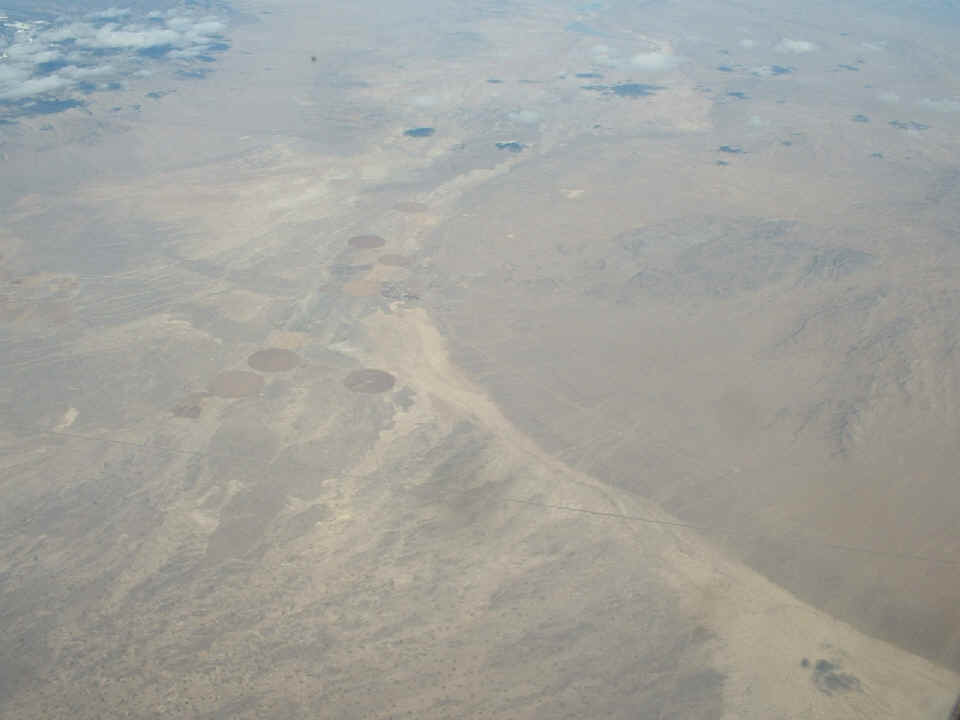 It was not long after this, that the captain became a tour guide.  We passed north of the restricted airspace north of Nellis AFB and the runway that is NOT on the charts at Area 51.  Of course, I was sitting on the north side of the airplane, so don't bother searching this site for any classified photos - - I did not even try to get up, move to the other side of the airplane to look, much less get my camera ready.