June 25, 2006:  My trip home from Harrison was documented better on my video since I did not take any digital still camera photos until I got home late that night.  Here are some of those video snap shots.   This first one is taken during the Eastbound climb out of Harrison, Arkansas. 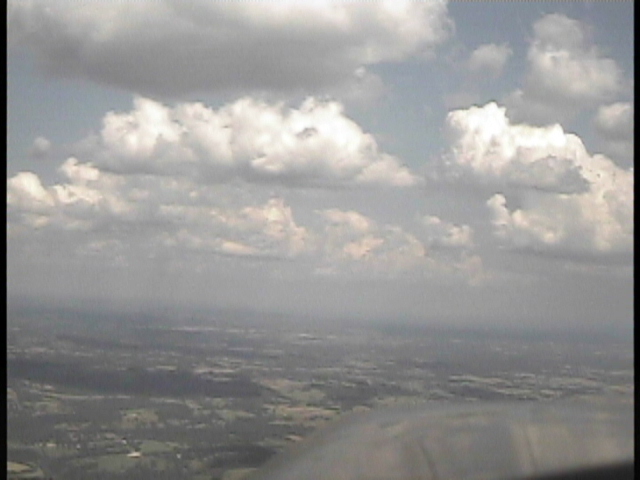 The atmosphere is getting thicker as I head for the Mississippi River. 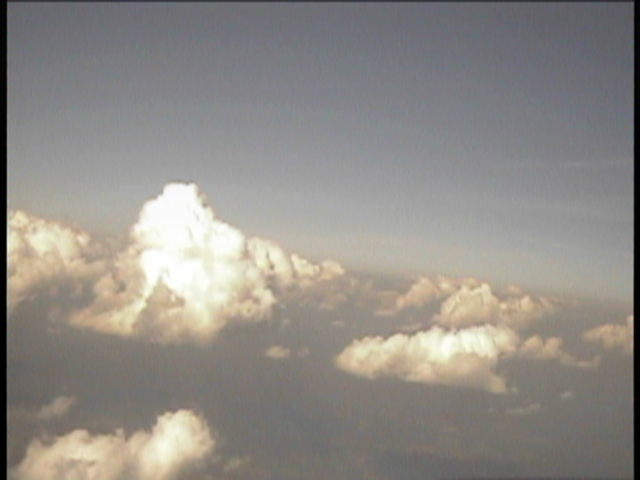 Here I am up at 12,500 MSL and the build-ups are getting higher as Memphis comes closer. 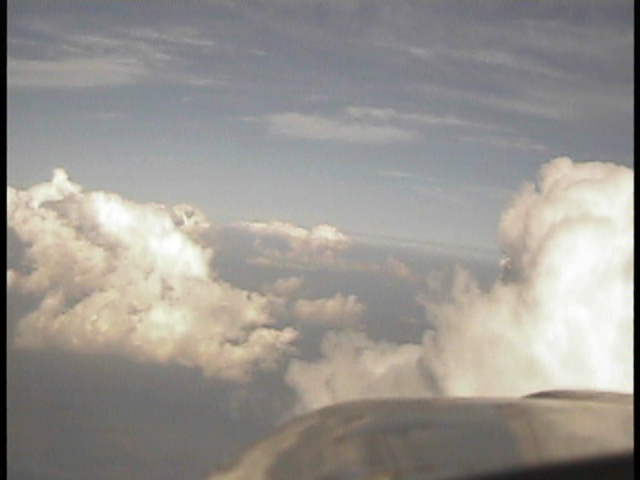 This is my last stop of the day for fuel at Courtland, Alabama (9A4).  The haze at ground level is getting thicker.  This location is west of Huntsville, Alabama and less than one hour flight time to my home field. 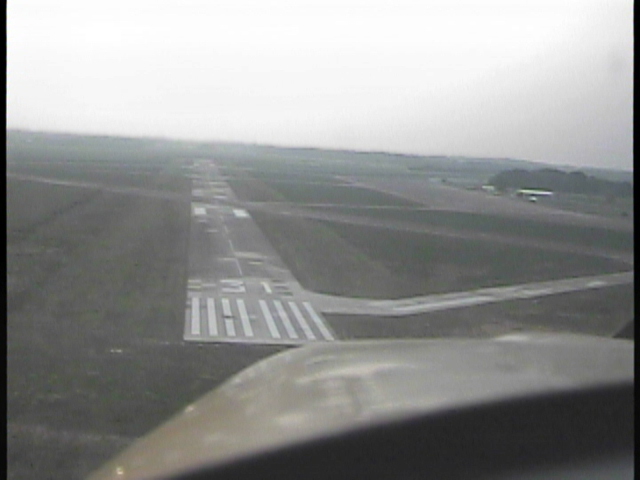 This last airborne video snap shot of the day was about 20 minutes from home in Northeastern Alabama.  I am at 3,500 MSL just below the first cloud layer.  It is also about 20 minutes before sunset according to my GPS 296.  I looked over my left shoulder and could occasionally see the sun peeking through the clouds.  At this point a solid overcast is about 2000 feet above my flight level.  The video camera shutter speed is slower now to make up for the lower ambient light levels.  No more sharply-defined propeller blades in the video.  Those "mountain tops" are 1,500 to 1,700 feet MSL typically in this area. 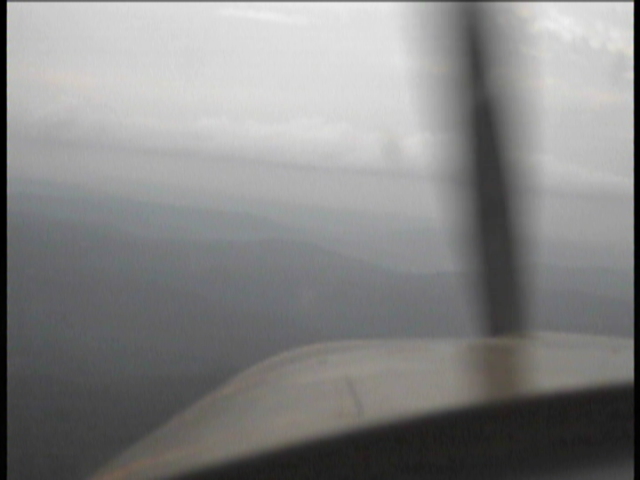 The last mountain I have to cross is Lookout Mountain in Georgia.  At the point I will cross it, the elevation is 2,300 feet and I passed it later with room to spare.  I was so glad to see my home valley, I forgot to turn on the video camera for the landing at Folks Field.  Wendell was out on the ramp with the 182 rolled out for me to pull in behind it at the hangar door.  It was 8:57 PM when I touched down - - official "sunset" for our location.  I spent the next hour talking with Wendell about the trip as I unloaded the airplane and packed the car for the 14-mile ride home.

Here is the last picture I took back at home showing the two trophies I received at the RMRFI.  I expected to get the longest distance flown, but I was surprised that I got a trophy in the top three for Best Homebuilt from a kit.  A guy from Ohio was surprised that my flight of 1,171 miles was longer than his.  When you look at great circle routes, the farther north you are, the shorter the route. 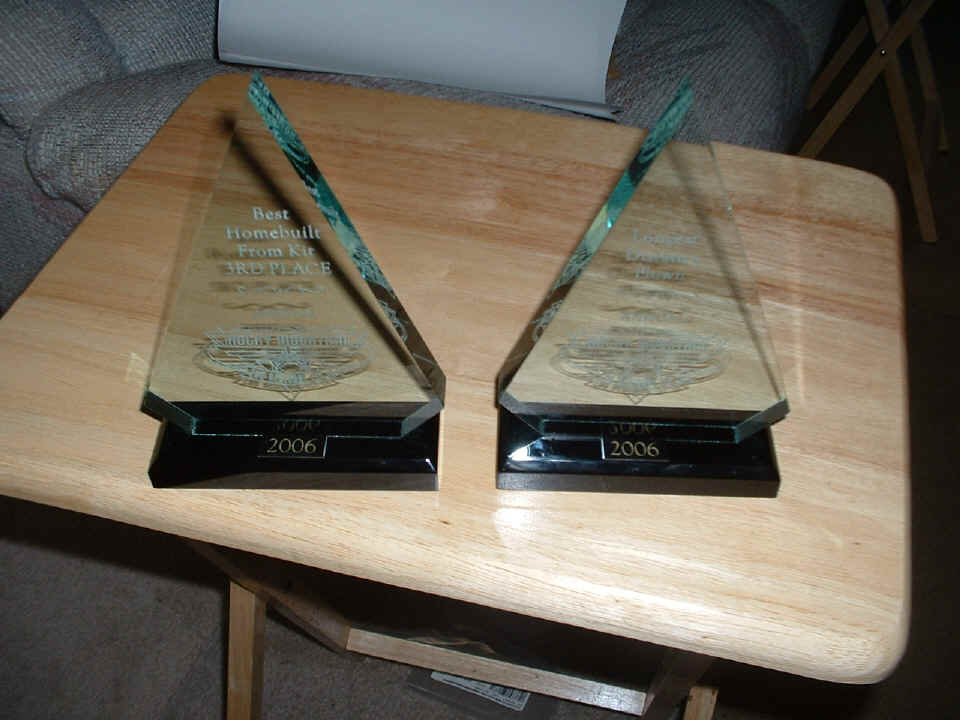 Here is the overview of the routes flown to and from Denver.  The RED line is the 1,181 miles flown Westbound on June 18, 2006 with a Hobbs flight time of 8.4 hours.   The GREEN line is the 1,171 miles flown Eastbound on July 25th with a flight time total of 7.4 hours.  The separation near Wichita is about 75 miles.  I was lucky that my prepared flight plan for the Green line kept me away from a towering thunderstorm over Wichita as I passed near there during the early afternoon.

June 29, 2006:  Thursday evening gave me a chance to visit with Wendell to keep him on track with his wing tip work.  It also gave me a chance to fix my video camera situation.  The reviews you have heard from me and seen in some of the video still pix captures was what I wanted to settle this evening.  I think I have it under control now.  I have added a white sticky label to the back side of my dash-mounted video camera.  The purpose was to put on a "horizon line" to make sure the camera is adjusted properly for shooting videos in flight, etc.  I also had a chance to loosen the mounting bracket, then secure the setscrews to get some control over the ball joint that supports the camera.  This will allow me to position the camera better when I am in flight and want to look outside the prop arc for video coverage, etc. 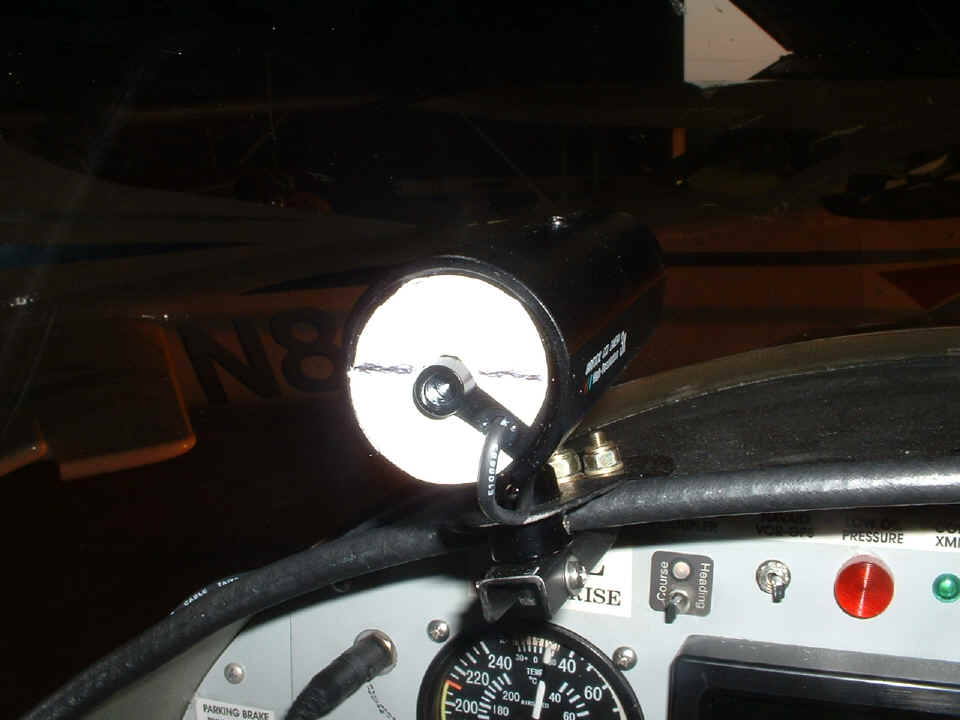 And here is what I used for a target to calibrate my horizon line.  Yep, my trusty Stanley carpenter's level to the rescue.   You can see that I set it up on the back of Wendell's 182 with a block of wood to adjust it to LEVEL.  Then I aimed my video camera at it, zoomed in to get a good view, then tilted the camera to be sure the carpenter's level was parallel with the bottom edge of the video frame.  I observed all this on the video display screen of my digital video camcorder.  I secured the dash-mounted video camera in that position, put on the sticky label, then made two reference marks on the white label that were visually sighted with the carpenter's level.  Then I drew in the heavy black lines you see in the photo above.  It was at that point that I noticed the metal sun shield on the camera needed to be aligned to be square with the "horizon line" on the back of the camera body. 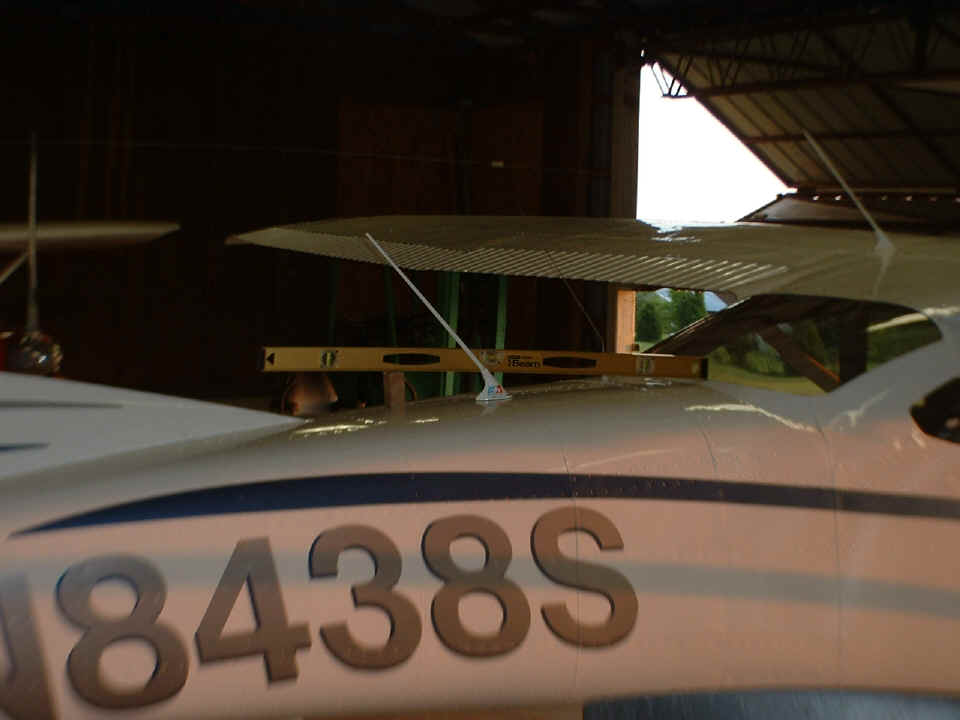 The result of this exercise should be better videos in all phases of flight the next time I go out to make some video records of my travels.  As for Wendell's work tonight, jump over to his latest page to catch up with his work.