July 31, 2006:  Here are MORE "video snapshots" from the video tape recordings I made during the trip to AirVenture 2006 at Oshkosh.  There are things here that I did not have time to capture using the digital still camera.  The resolution is low at 640 x 480 pixels.  All photos on this page were taken on Wednesday, July 26, 2006.

We had rain both Monday night and Tuesday nights.  I took a video panorama using my camcorder "in hand" instead of just as a recording device for the dash-mounted camera.  I was watching the low cloud cover passing by when I was making this tape segment. 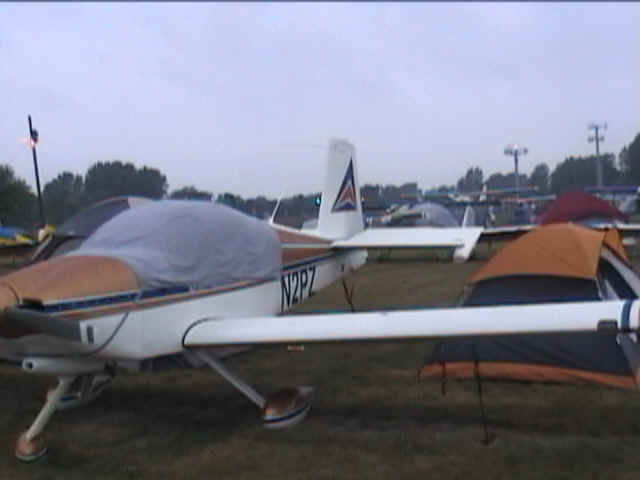 This pilot from Oklahoma had been asking me about my airplane when I was starting this video shot, so I put him in it, and of course he does what so many of us do when we are on camera - - smile, and wave. 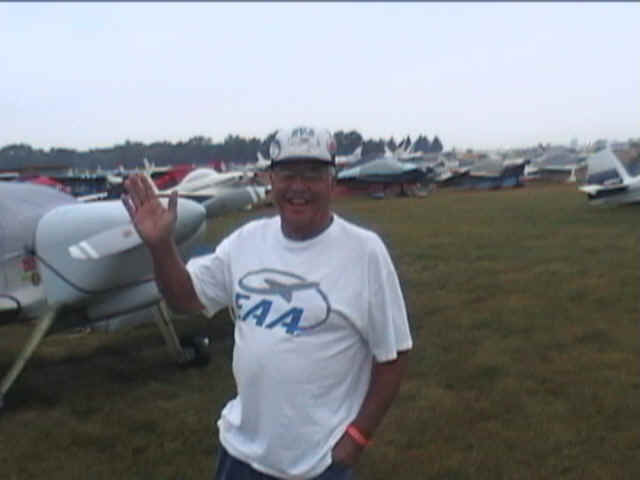 I told you about David Edgmon being here again this year.  His red airplane was parked on the row behind another of his friends, Bob Butler, whose tail number and two-tone blue vertical stabilizer are seen at the right of this snapshot. 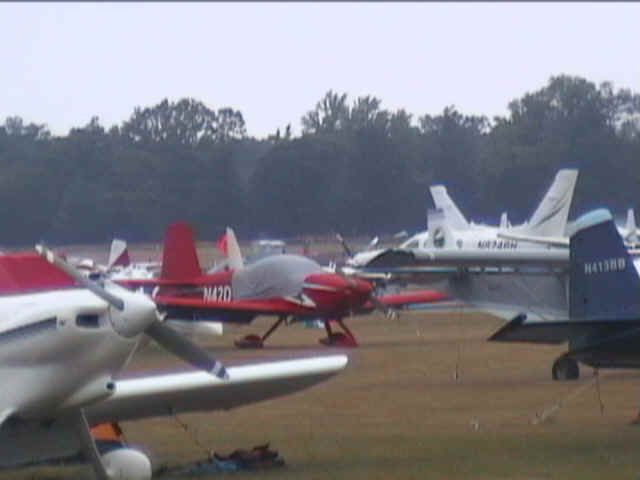 After all the packing was done, we taxied our group of four RV's out of the camping area and onto to the active taxiway.  Here is the first flagman we encountered after our escort vehicle got our group to the flight line.  I am leading the parade with my RV-9A, followed by Jim Harchanko in his RV-7A, Bob Butler in his "blue on blue" RV-6, and the silver and white RV-8 of Marshall Jacobson. 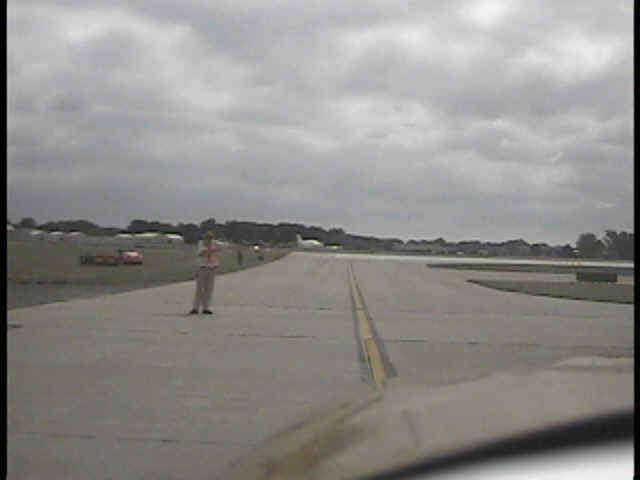 As we started our turn onto the taxiway parallel to runway 18, a light airplane turns final on the taxiway on the other side of the runway that is temporarily designated at 18L. 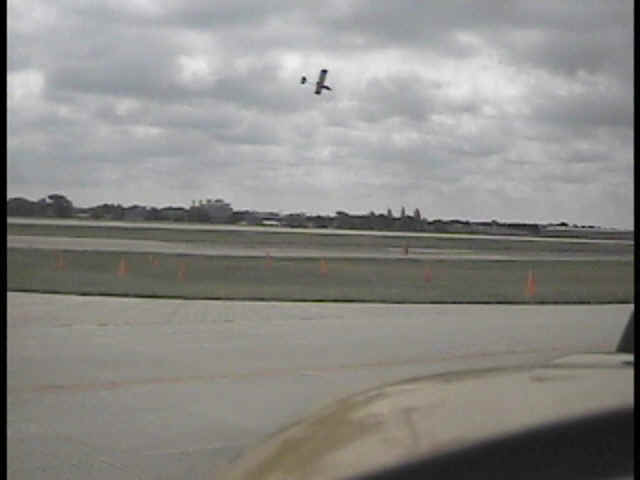 The next intersection to the south is the one where airplanes are staging before getting on the runway for takeoffs to the south on 18R.

This shot says a lot about the aviation spectacle that is AirVenture.  Up front waiting for clearance to take the active runway is a classic Ford Tri-Motor with corrugated metal construction and three radial engines.  The Long EZ ahead of me is waiting for a Cessna to pass by on the northbound taxiway you learned about in my previous postings.  The flagmen are in control here, listening to the tower on portable radios.  Since I did not hear the tower talk to the Tri-Motor, I wonder if they even have a radio onboard, or just respond to the light gun from the control tower. 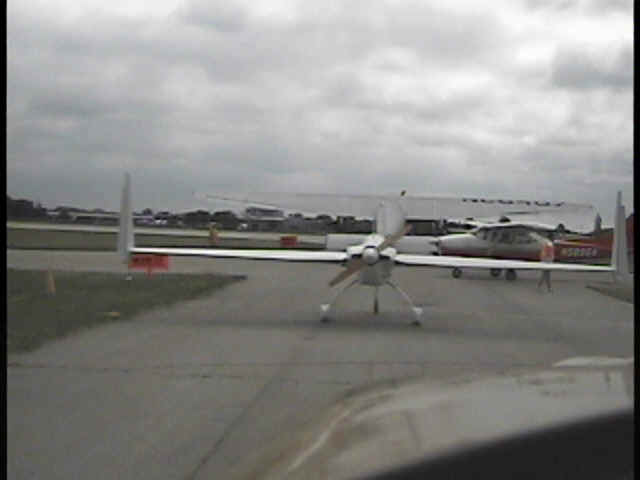 The Ford Tri-Motor begins his takeoff roll on 18R.  There is a big BLUE DOT painted on the runway out there in front of this intersection.  It does not show in this photo, but it is a landing target the tower uses to land more than one airplane simultaneously on the same runway when things get really busy here at Oshkosh. 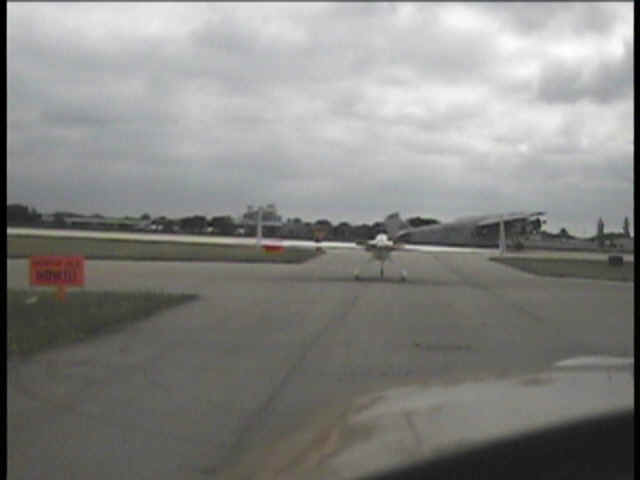 By the time I am given LEFT SIDE, POSITION AND HOLD clearance the Long EZ has departed and is hard to see from my vantage point.  The tower clears me for takeoff by the time I get in position. 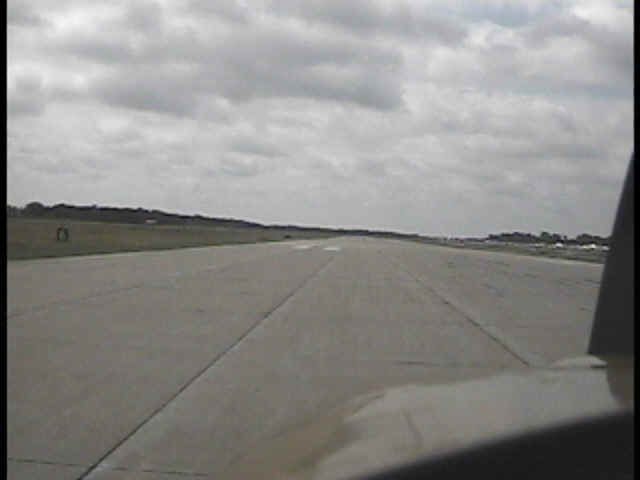 By the time we reach the next runway intersection and the ORANGE DOT, my RV-9A loaded to gross weight is just about ready to leave the ground.  It is around 11:30 AM Eastern Time as we lift off the runway.  The holes in the lower cloud layer are getting to be more frequent with clear blue sky above beckoning to those of us departing KOSH. 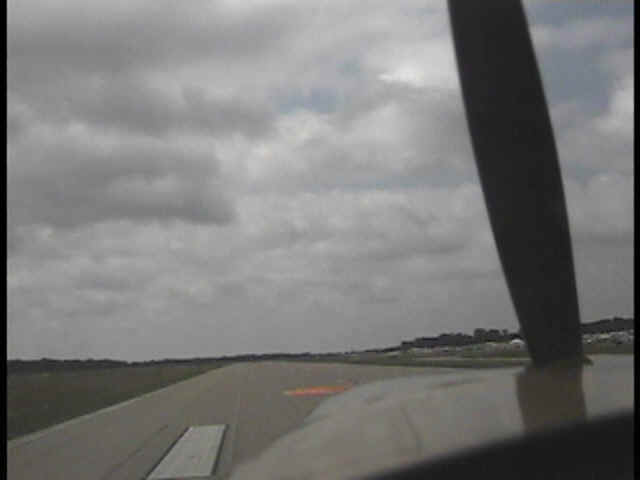