February 24, 2008:  I missed my usual web site update last weekend when I was out of town on business.  I will now bring you all up-to-date on the happenings with Wendell's project and my part in coaching him toward its completion.  The ailerons were re-checked for proper alignment this past Thursday.   The radar transponder and altitude encoder connections were verified on Saturday using my airplane to test Wendell's encoder on my radar transponder.  And finally, a flight today with both airplanes out for a short flight test.  I wanted to check out my alternator warning circuit.  I had tested Wendell's new alternator before my recent business trip.  I told Wendell I was only going out on the ramp to check my alternator, but it turned into a flight chasing him around the area to check his autopilot and the results of the heavy left wing.

I took off to the south to see if I could find Wendell.  By the time I had climbed to 3,000 feet and started looking around for him, he was heading back from LaFayette toward his home field with all his lights on.  I was above him as I saw him descending to make a pass over the field.  If he looked into the hangar, he figured out that I was in the air, but was not aware of my location behind and above him.  I tuned in Chattanooga Approach on 125.1 MHz and heard Wendell getting an advisory from the controller asking if he had a wingman.  Wendell said no, then I announced my call sign to the controller and that I had him in sight and would be following him in this flight.  The controller confirmed my altitude and VFR code, but indicated he still had no altitude report from Wendell's transponder.

Here is the first in-flight photo of Wendell's RV-8.  This shot is taken around 3,000 MSL while cruising around 140 MPH.  I pushed the zoom feature of my camera just a bit to get this photo.  The drought conditions in this part of Georgia are visible below. 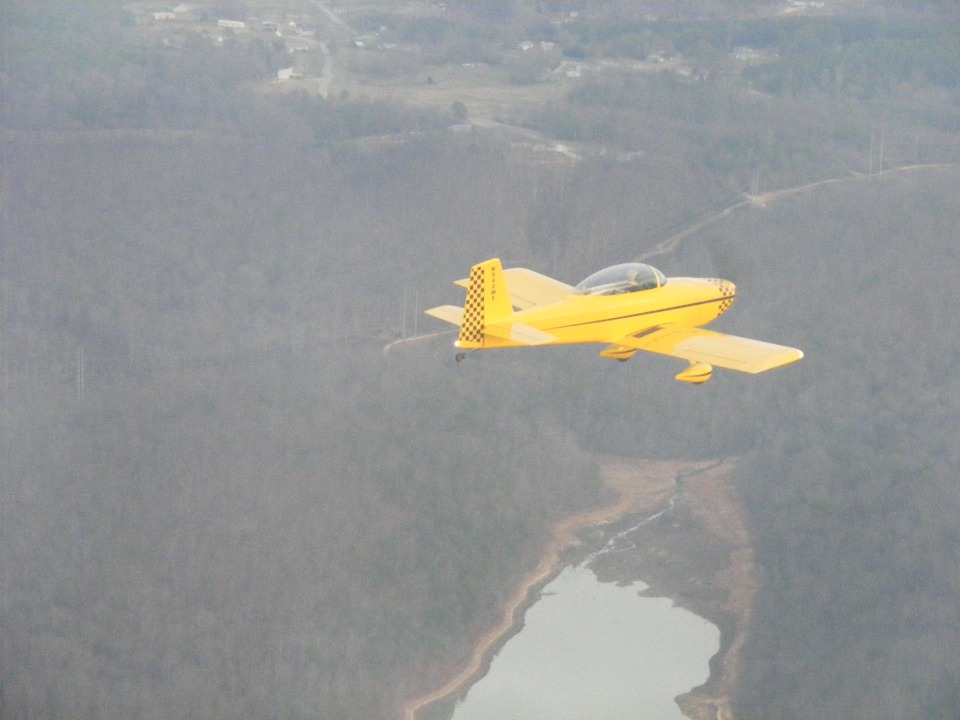 This photo is not so sharp but does provide some idea of how far apart we are. 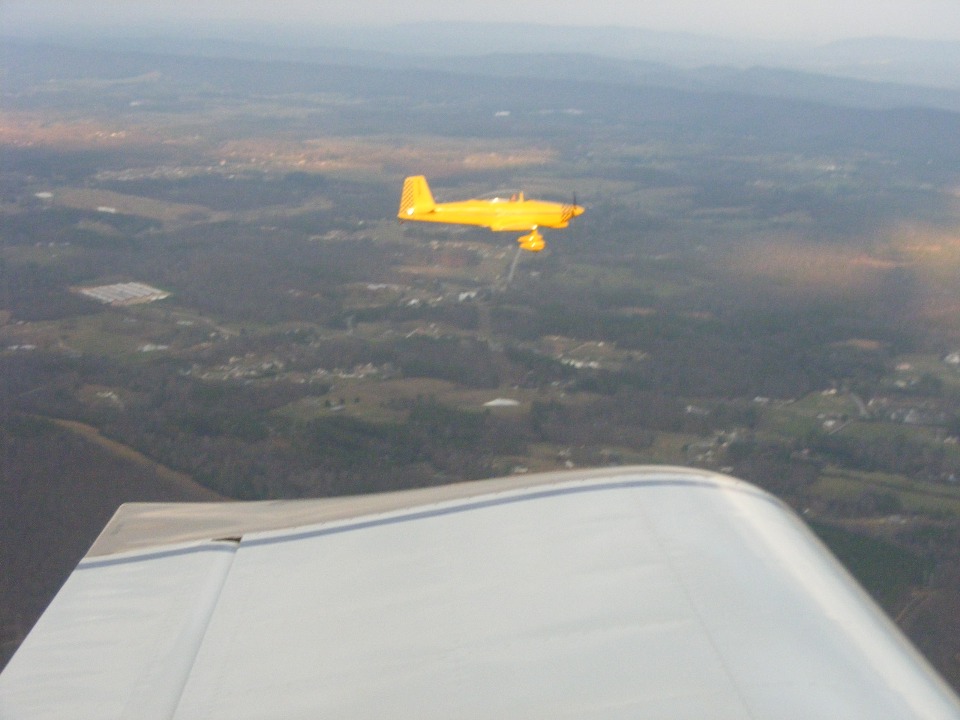 This sun angle has washed-out the checker pattern on the rudder. 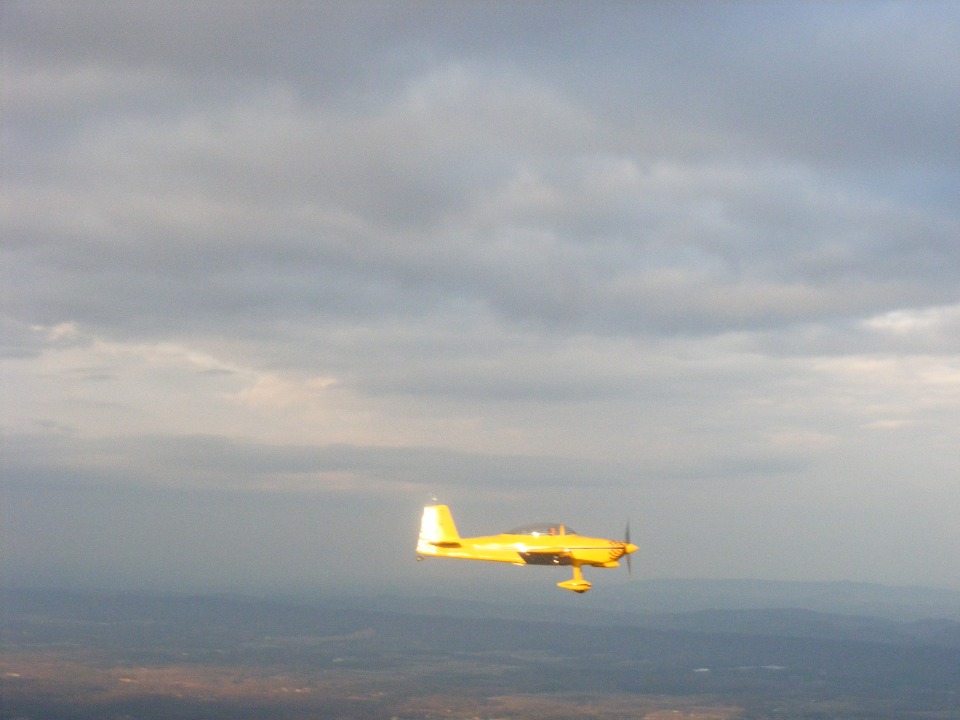 We finished up the flight with a trip over toward Dalton, Georgia (KDNN) to test the autopilot, and it was found lacking.  The altitude hold was just fine.   We have additional wiring checks to perform in the coming days.  Wendell's landing lights are visible just to the left and below the wind sock in this photo taken from my parked location on the ramp in front of the hangar. 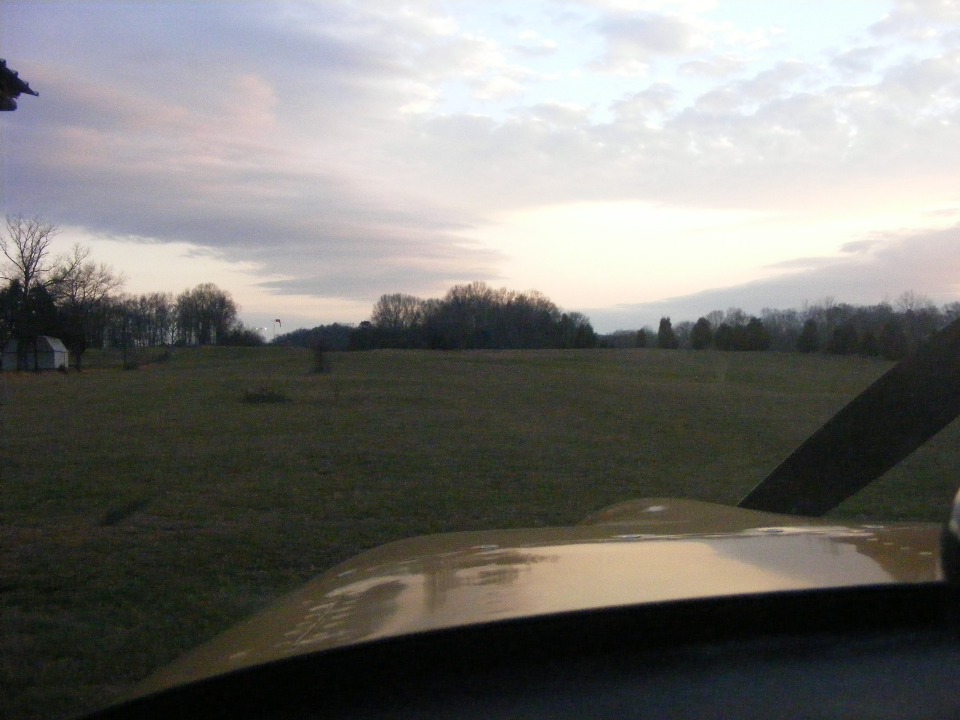 This is a cropped section of the photo above. 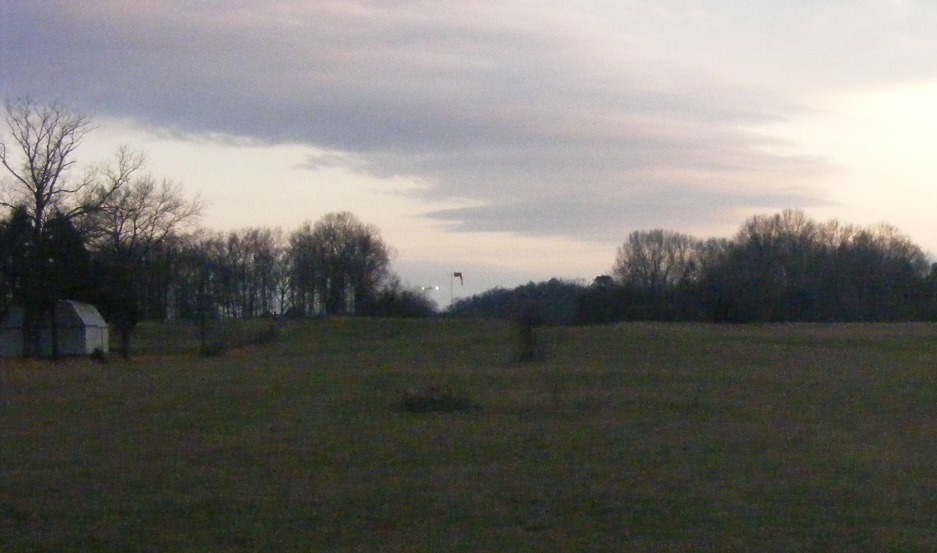 Wendell is coming home to roost for the evening as the sun is getting low in the western sky. 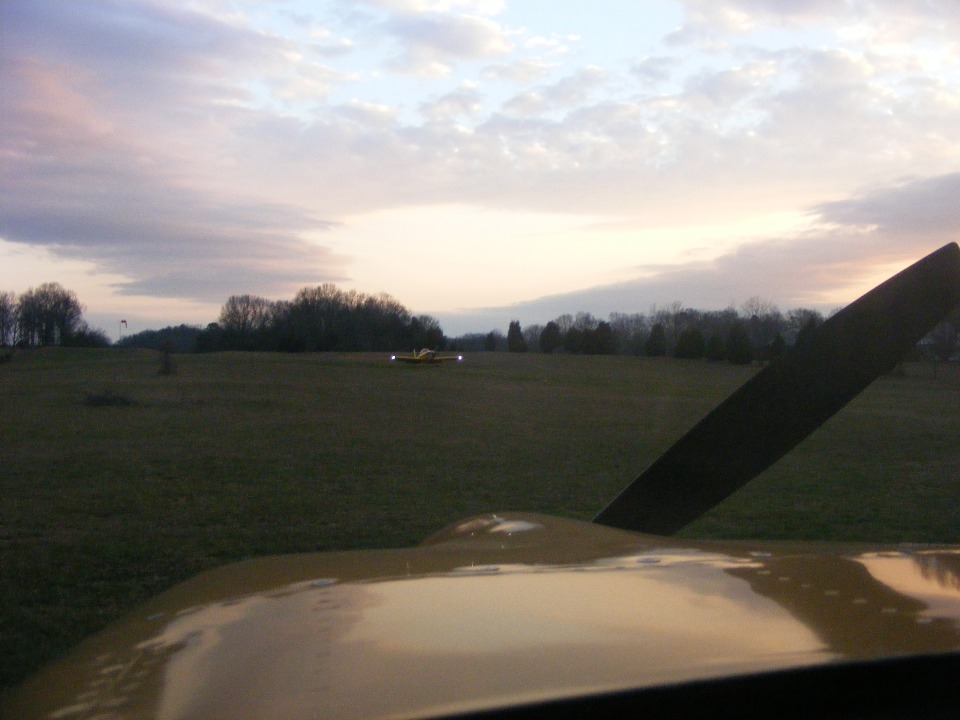 The day ends in the hangar with Wendell draining the oil from his engine after 11 hours on the Hobb's meter.  You can see that photo on Wendell's page 85.  My airplane got another 0.7 hours added to the Hobbs meter, which now shows 241.1 hours since my first flight on June 9, 2005.

March 2, 2008:  This past week had a surprise trip to Florida that was short and potentially profitable for my day job.  A distributor in Florida needed a fiber optic demo for a solid customer with lots of projects scheduled for the next two years.  I got the word last Monday of a potential meeting on Wednesday, February 27th.  I made sure my laundry was done and the oil changed in my car to be ready for a possible trip on Tuesday.  The meeting was not confirmed until Tuesday at 8:55 AM.  The road trip began at 10:35 AM, to put me through the Atlanta traffic just after 12 noon.  A quick lunch on the southside of Atlanta and fuel near the Georgia / Florida state line were the only stops before a light dinner snack near Saint Augustine, Florida.  My arrival at the hotel in South Florida was just before 11 PM after covering over 750 miles.  It is "Snow Bird" season in South Florida and the hotel rates reflected that fact.

In the RV-9A, this trip would have been an easy 4.5 hours, but the weather fronts and the storms on that day were nasty.  With the equipment I need for my presentation, it would have been bad to take to the airlines, IF I could have gotten a seat on such short notice.  The weather delays for flights would probably have taken up just as much clock time considering TSA lines, the ride to the ATL airport, etc.  Using my Caddy as my mode of travel meant the mobile office was open to accept calls all day, and no lost or damaged baggage.  I also enjoyed the view of the South Georgia countryside after passing the first rainy areas in the Atlanta area.  With the drought conditions that have prevailed in Georgia, it was good to see that steady, soaking rain.  I encountered a lot of rain when I got down below Saint Augustine, Florida.  Tornado warnings were lifted in the Central Florida area just as I was arriving in that area.

The meeting on Wednesday morning went well with the promise of over 1,000 fiber optic links to be sold over the next two years to the big customer.  My distributor was very happy since they will sell other equipment beyond my fiber optic transmitters and receivers.   The meeting lasted from 8:30 AM until 11 AM.  My contact at the distributor had a road trip to begin and so did I.  After a quick lunch at one of my favorite Palm Beach County restaurants, I pointed the car North and headed for home.   Since I did not have a critical deadline, planned an overnight stop and a more leisurely ride back to the Chattanooga area.

Along the way down and back, I did get a couple of phone calls from Wendell with reports of some of his test flights when weather permitted.  I have the details of those flights and a new photo to share on HIS PAGE 85.