August 17, 2008:   The sight-seeing flight for Dale was completed in the morning.  After lunch, I grabbed my camera and cell phone from the airplane and we headed over to Dale's home to see his workshop and labs.  He likes to build "battle bots" as a member of the Atlanta robot club.  This one is a lightweight model named Omega Force.  You can learn more about Dale and his hobbies via his web site:  http://www.wa4dsy.net.  If you look at his web site long enough, you will discover he is the guy who invented the world's most popular telephone modems used in so many computers before we had high-speed internet.   The Hayes-compatible telephone modems of today still use his modem control protocols. 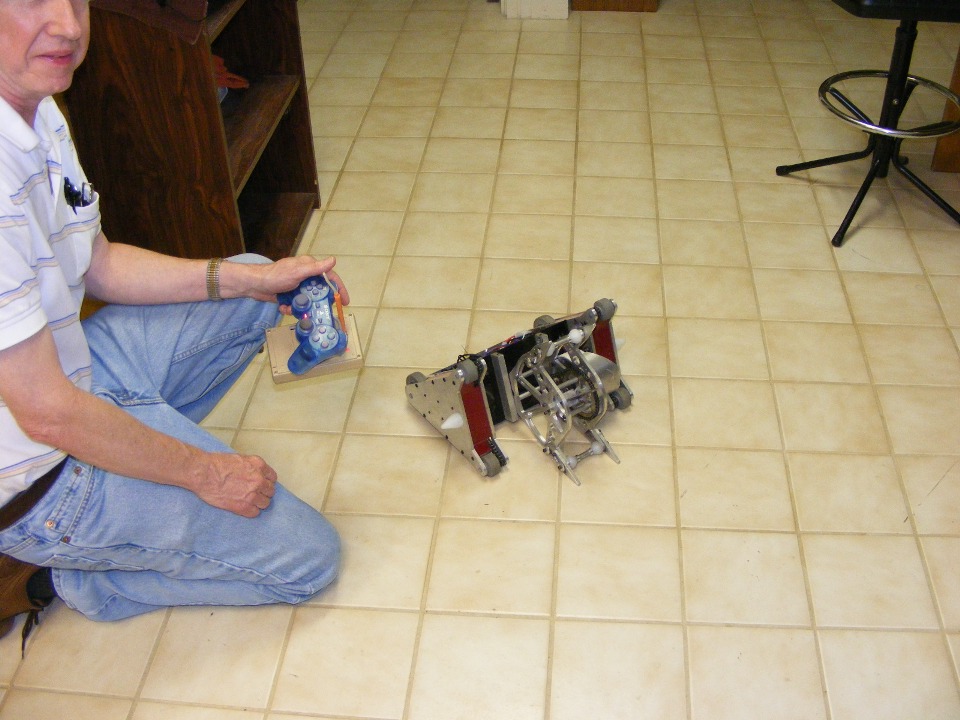 This one is in the 30-pound weight class and packs a real punch at flipping the opposing machines off the platform arena.  Dale named it the "OVERTHRUSTER" since it can function upright or on its back.  It has complete symmetry.  The controls automatically adjust to whichever side is UP at the time.  It has a heavy duty flipper at each end.  By the way, when it is upright is the only time you can see its name.  This is also the side with access to the ON/OFF switch.  The red triangles point to the "business end" of this beast. 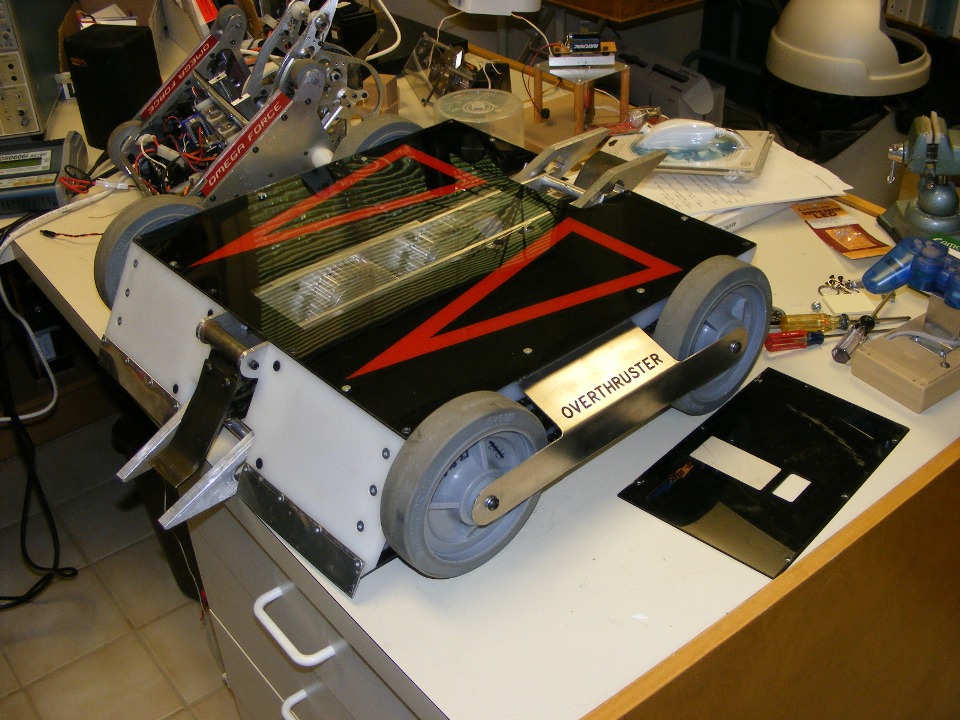 This project is a little BOT that can balance upright on two wheels.  It is all analog feedback from sensors, no microprocessors at all for this little guy.   It is a demonstrator that shows how the "Segway" people mover works.   This photo also shows the custom-built drive gears inside the bigger battle bot.  Dale has a computer controlled milling machine that can turn out those gears from raw aluminum stock or engrave name plates.  He also has a big metal lathe and wood working power tools. 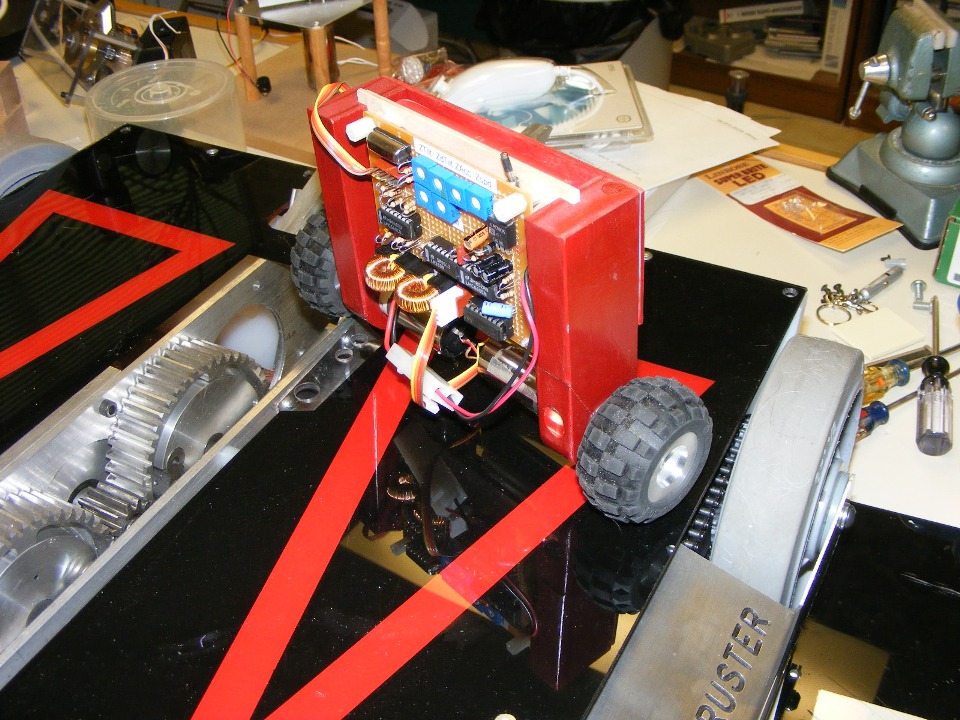 This photo gives an idea of the focal point of the lab, the RF workbench area and electronic parts bins.  If I turn around from where I am taking this picture, there is a dark room and photo lab behind me.  Everything in there has been pretty much unused since digital camera resolution has surpassed chemical photographic films.   Now you know why all the film companies are now building digital cameras. 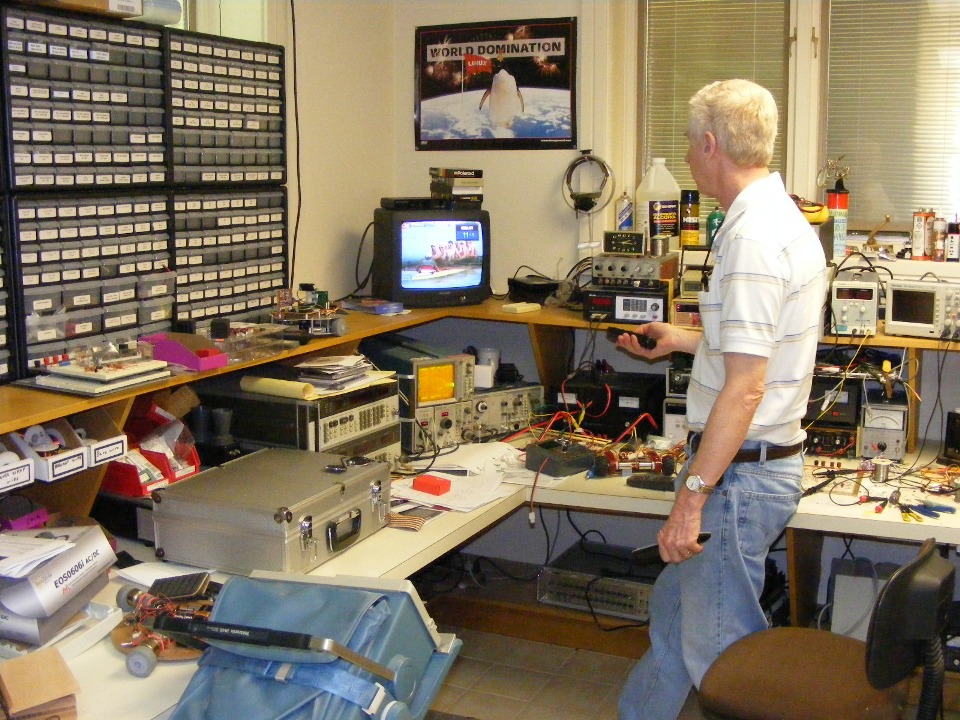 Here is a close-up of the Tektronix 7L14 spectrum analyzer showing local analog and digital television channels in the Atlanta area.  That analog channel near the center of the screen is VHF channel 11, with an 8VSB digital TV transmission just to the left on channel 10 (192-198 MHz).  It is the broad, FLAT looking signal with little peak at the left.  The flat portion of the signal trace from the far left of the screen going less than two squares toward the signals is the noise floor where no television signal is present.  The center frequency tuning readout is out of calibration.  There is a pot to adjust it, but I did not think to do that before snapping these photos.  That tallest analog RF carrier is at 199.25 MHz.  There is a weaker digital television signal on channel 12 at the right side of the display screen.   The line at the bottom across the numbers is a retrace and does not represent an RF signal. 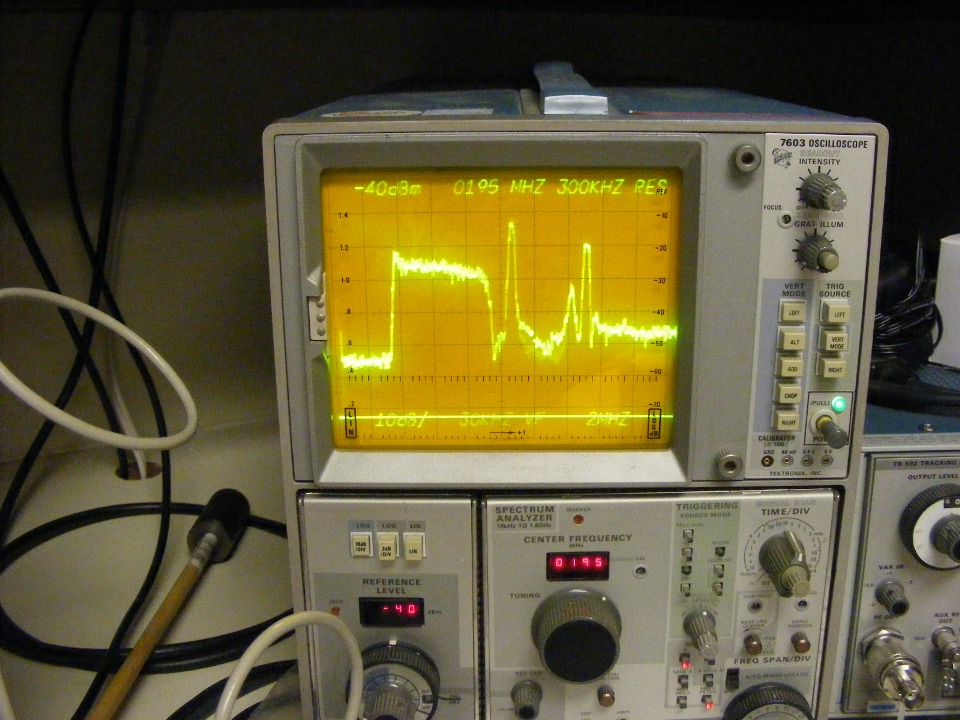 I put the scope into analog display mode to give a more realistic view of the television signals.  This is what I have been doing for the past 37 years, television transmission systems via coaxial cable, satellite uplinks, and ground stations.  I currently work with television transmissions via fiber optics networks.  For those of you who are not familiar with the NTSC analog television signals we have been watching for the past 50+ years, the tallest signal is the picture carrier containing the horizontal and vertical sync pulses, plus the black and white portion of the TV channel.  The second tallest carrier is the frequency-modulated sound carrier.  It is typically transmitted at a power level from 6 to 10 dB lower than the picture carrier.  It is shown here 8 dB lower.  The small signal between the two tallest RF carriers is the color subcarrier and it varies in strength with changes in phase and amplitude with the color content variations of the analog television picture. 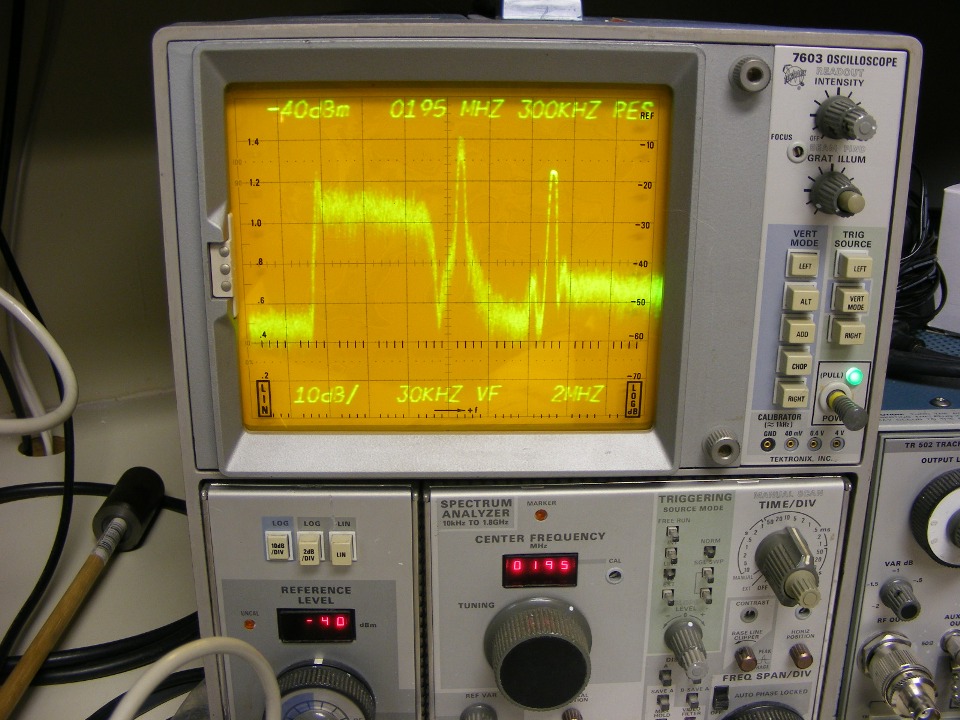 This is the electronic heart of Dale's home.  These components are the combining networks and RF amplifier to push all the VHF and UHF television signals all over the house via coaxial cable.  Telephone and intercom functions are also routed through this closet.  The open box with computer chips at the bottom center of the photo is his weather station, which has its own television channel of course. 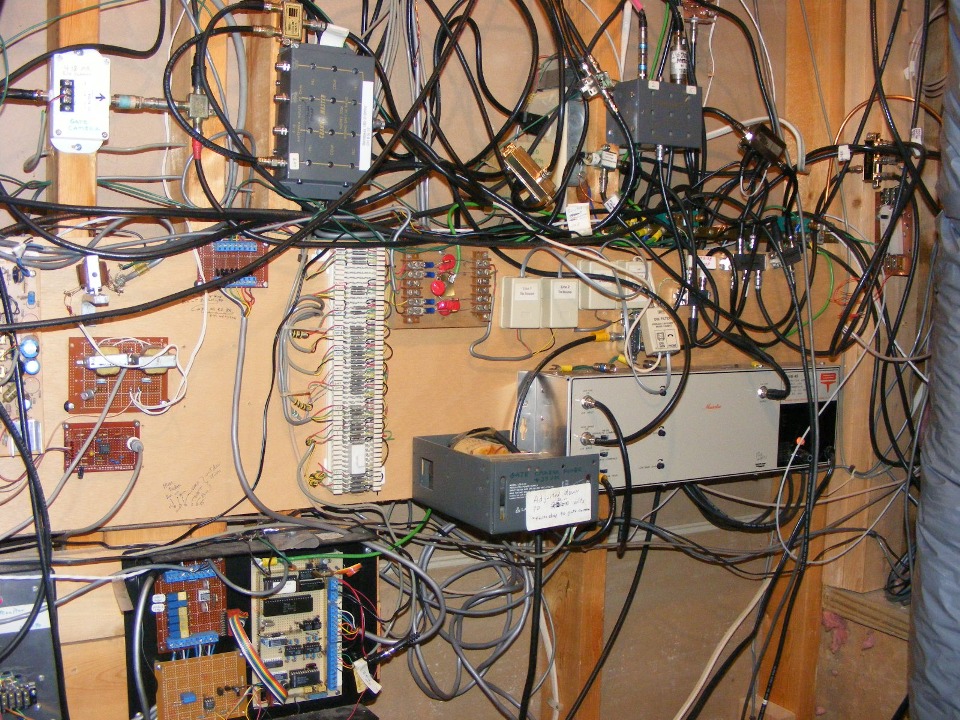 The last shot of the day is this hand-built UHF preamplifier.  It has a double-tuned RF input filter and a voltage regulator to provide 12 volts to the NEC RF amplifier chip.  The RF output is at the top of the photo.  It is built on double-sided copper circuit board material.  You have probably noticed  by now that Dale builds a lot more than just robots.  He does have a degree in Electrical Engineering, the same one I have from our old alma mater, Southern Technical Institute, Marietta, Georgia (now known as Southern Polytechnical Institute).  What you have seen here is how all electronic circuits begin life, as prototypes.  When a product has broad appeal, that is when it is designed for mass production and becomes what you buy for your home. 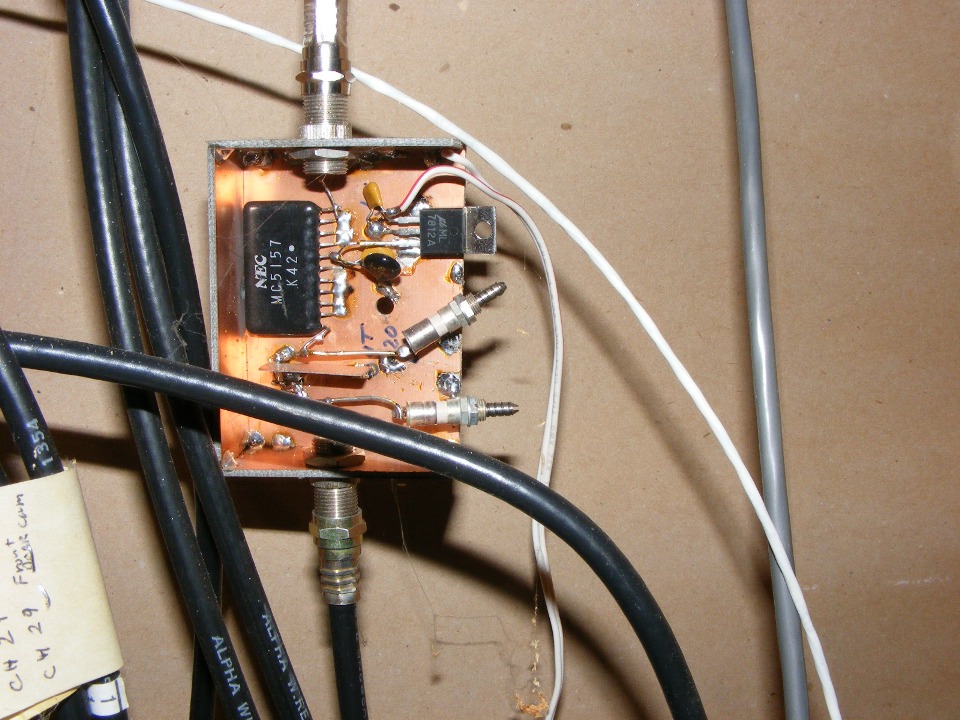 August 23, 2008:  It is my usual Sunday morning blog update, but with no flights of my own to report.  By now you have seen that I have been editing my entries from last week for balanced page content, plus adding a few photos to the flyover page for Dale's home.

I did go over to the hangar yesterday to check on a small project Wendell was doing on his airplane during the week.  You can catch up on that project and the short flight he made yesterday to give an old friend of his a ride in the RV-8.  The photos and text are on Wendell's PAGE 88.