September 1, 2008:   The first Monday in September is Labor Day in the USA.  This is a holiday when many businesses are closed and the days are still warm as the last weeks of summer are here.  I spent the afternoon at the hangar helping Wendell inspect his engine for a few minor oil leaks which turned out to be the oil return tubes from the rocker arms in the cylinder heads back to the engine crank case.  The small hose clamps on those lines were not fully secured.   He also changed the engine oil and filter again since the airplane now has just over 80 hours on it.  We also looked at the oil cooler installation and discussed how to install a larger oil cooler. 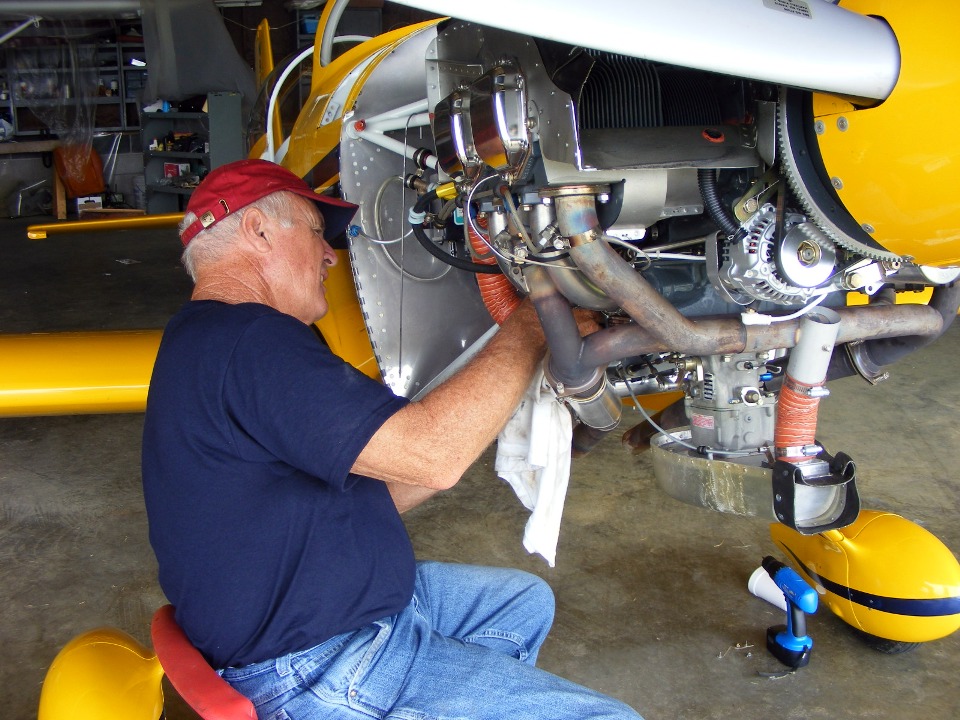 I was also at the field on Sunday, August 31st, to clean my airplane after the flight I had on Saturday.  Wendell asked me to help him change some minor GPS 396 settings that could be affecting the data sent to his Trio E-Z Pilot.  He was telling me about the first time his autopilot went off line during his recent trip to Oshkosh.   After he finished the oil change and got the airplane back together, he went for a short flight to see if the autopilot would work correctly.  The answer was to that question was no.  When he landed, I put my GPS 296 into his panel and he made another flight, also with the autopilot not responding properly.  Here is the GPS ground track of that second flight using my GPS.  You can see below how he took off and flew around the pattern one time, then engaged the autopilot as he passed over field heading south.  The autopilot made a slow right turn out to the west around the town of Chickamauga, Georgia.  He let it try to get back on course as it turned toward the south, then turned it off and returned to the landing strip. 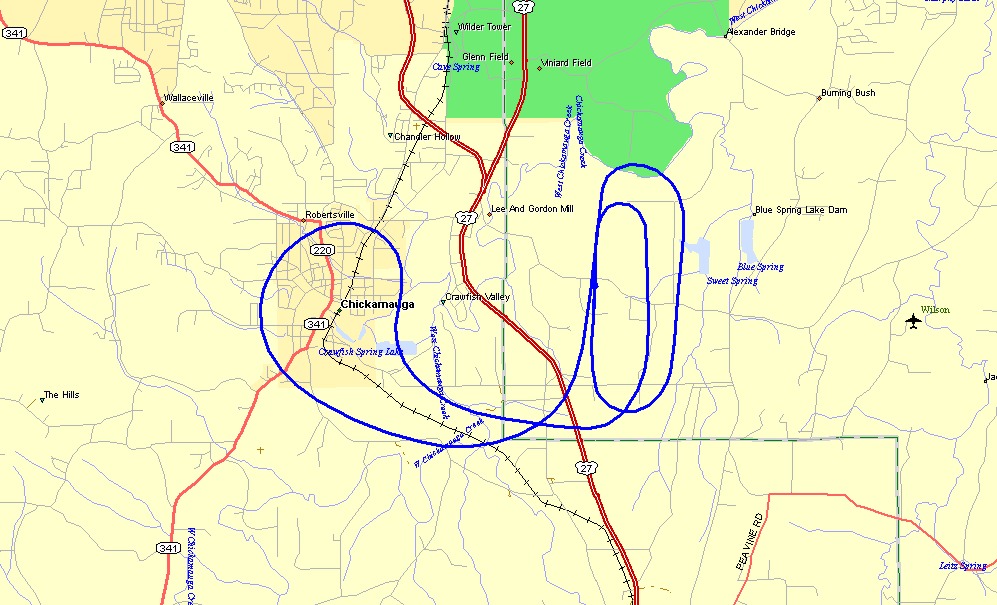 While Wendell was doing his work and the test flights, I was removing the old and faded UHMW tape from the nose gear leg fairing.  At first I was just pulling the tape off when the fairing was still installed on the airplane.  The portion you see here was up underneath the upper gear leg intersection fairing. 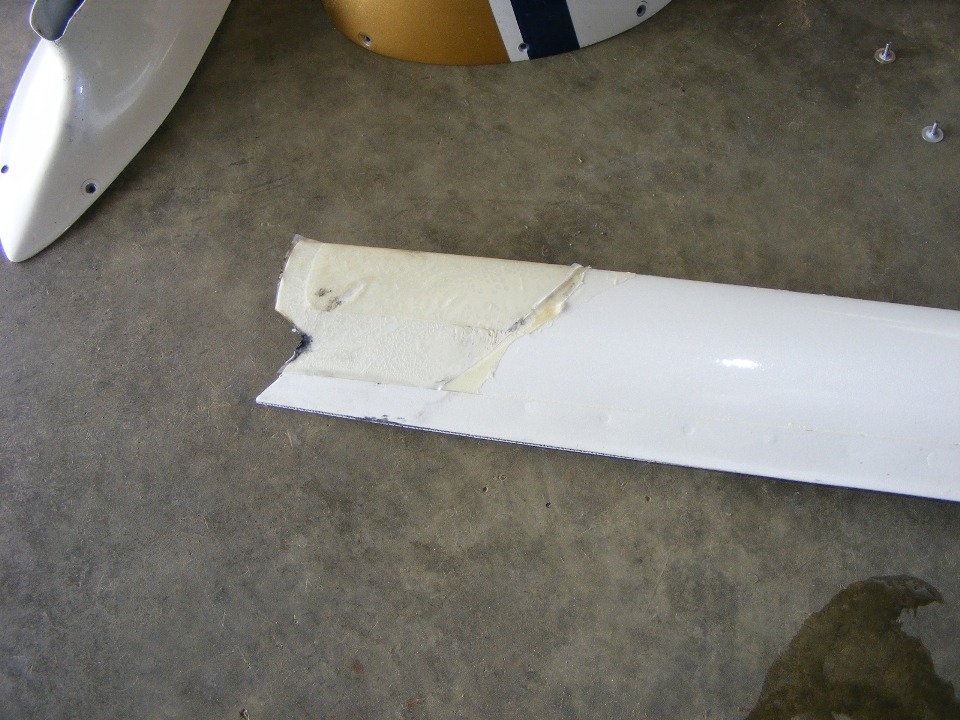 Here is the lower end of the fairing as I prepare to remove the tape remnants that were down there. 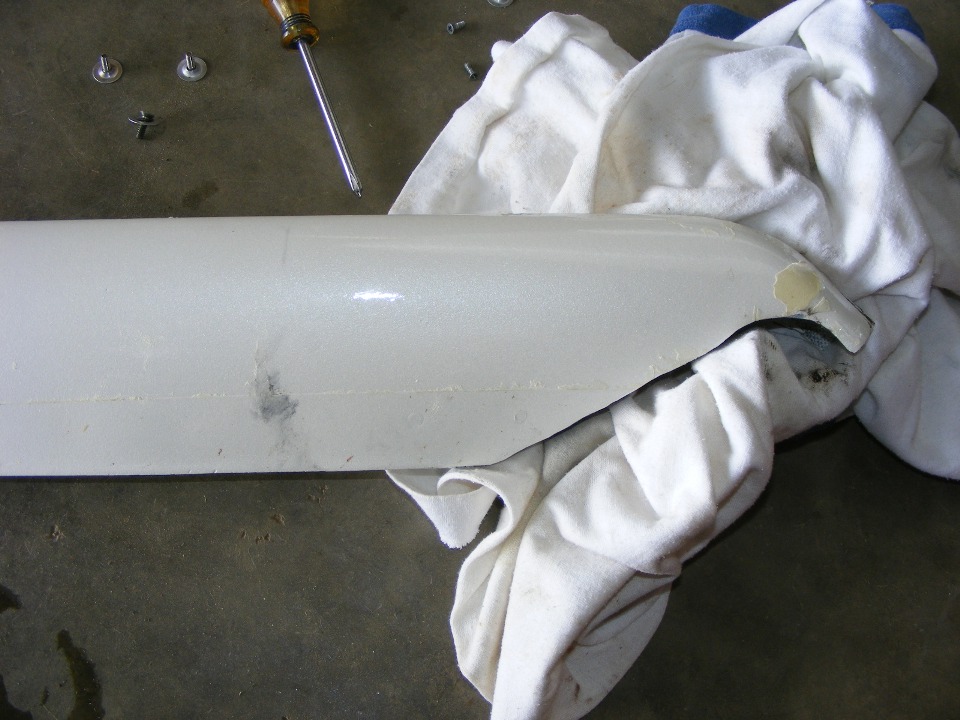 Here is the end result when everything was cleaned and re-installed on the nose gear leg.  The temperature was 89 degrees today, hence the fan in the background and my tall cool RED CUP of ice water always nearby. 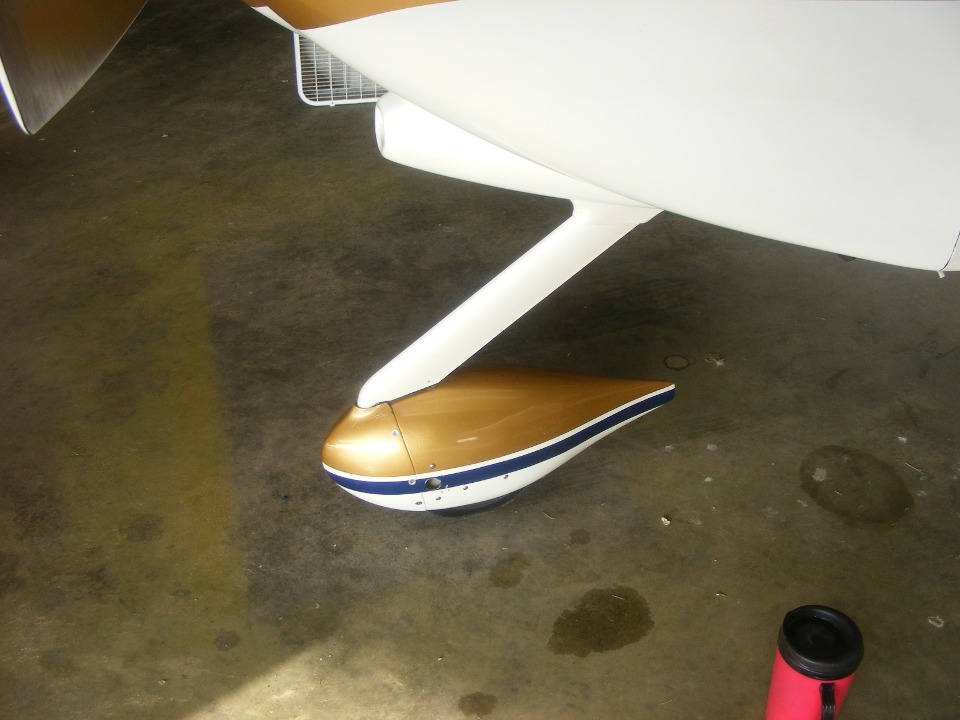 September 7, 2008:  No flying yesterday or today.  I stopped by the airport on Saturday morning to drop off the tech manual for Wendell's Trio E-Z Pilot.  I had talked with the company about his problems with it.  They said to ship it back to have a software upgrade and to also discover why it would not follow a GPS course line.

While I was at the hangar Saturday, I put a pair of 1/4" plastic covers over the exposed threads of the bolts that hold the canopy rollers to the frame.  I put a little bit of clear RTV in the covers to help them stay on the short exposed bolt threads.  I also cleaned the windshield inside and out to get off the bugs from the last flight.

Sunday was a good day to fly except for the early morning ground fog in the area.  I made a road trip down to Roswell, Georgia to see my friend Dale and had a couple of stops along the way to do some snooping in old cemeteries in Gordon and Whitfield Counties.  I found one monument that could be a person descended from my great-great grand parents from the 1860-1870 era.

I had lunch with my youngest son again near Kennesaw and enjoyed the ride on back roads, not the interstate with all the truck traffic.

September 14, 2008:   This is the Sunday morning after Hurricane Ike moved out of the Gulf of Mexico, into Texas, and headed north into the center of the USA.  I called my oldest son living in Round Rock, Texas yesterday and he reported only a few sprinkles of rain in the Austin/Round Rock area west of the storm track.  Other than gasoline prices rising, they were unaffected by the storm.  The gasoline prices around here went up about 30 cents per gallon.  I bought gas last week for $3.47 per gallon.  I called the same gas station on Saturday to discover that they were re-stocked with fuel and the new price is now $3.79.  Other stations in this area are in the $3.95-$4.00 per-gallon price range.

On the EAST side of the storm, things are different.  I spoke to my friend Monte in Florida whose family lives in the area around Beaumont, Texas which was on the right front side of the hurricane.  Early reports indicate that his mom's home for over 40 years in Bridge City, Texas may be destroyed.  She was with family in Houma, Louisiana when the storm came ashore.  We had been talking about a flying trip over there next weekend even before the storm made landfall.  I will find out if the airport at Orange, Texas we planned as a destination will be open by then.  It would be an interesting mission for my RV-9A if it happens, and if avgas is available at the fuel stops I have planned.  We shall see what the week ahead brings.

On the other side of things here at home, Wendell has sent his Trio Avionics E-Z Pilot back to the factory for check out and upgrade after the recent incident I reported above on this page where it no longer would track a course from the GPS.   The new firmware upgrade to the unit will accept serial data at 9600 baud, twice the previous rate, making the E-Z pilot compatible with a serial data mode Garmin uses to access all the features of the GPS 396 with air traffic displayed on the screen from the Garmin GTX-330 radar transponder.

Wendell also ordered a larger oil cooler to help his high oil temperature issues with the O-360 engine in his RV-8.  As I finished typing the previous sentence, I received a call from Wendell saying he has the new oil cooler mounted on the engine baffle.  I will be going by the hangar later today to take photos and will add them to his pages in this web site.

UPDATE:  The photos of the new oil cooler installation are posted now.   You can read all about it on his PAGE 88.

September 21, 2008:   Yesterday was the RV fly-in at the Lebanon, Tennessee airport.  I got up with the possibility of going there but a look at the weather over that way and at Huntsville, Alabama changed my mind.  Saturday was non-flying day in favor of keeping my fuel in the tanks.  Wendell had a visit from our local A&P mechanic and Rocket builder, Rich Nadig, to investigate the minor oil leak from the push-rod cover on his number 2 cylinder.  I got a call from Rich yesterday afternoon regarding the details of what he found when he took off the valve cover.  I will be going over to the hangar today to photograph the broken retaining clip that was replaced to solve the problem.  I will also have another story to relate to you later today when I return home.

Wendell also reported to me about his first flight yesterday with the new larger oil cooler.  No high oil temp problems of course!

Sunday, 3:15 PM:  Here are the two original push-rod tube retaining clips from Wendell's #2 cylinder head.  These guys live inside the valve cover between the two push rods.  Rich Nadig had brought over the gasket and seal kit and replaced the O-ring and seal you see on the tool box.  The other push-rod tube was in place, therefore the other two small rings were not used.   The problem began when one of the retaining clips broke.  The metal piece in the center is used to secure the other two clips and lock the bolt that holds them to the cylinder head. 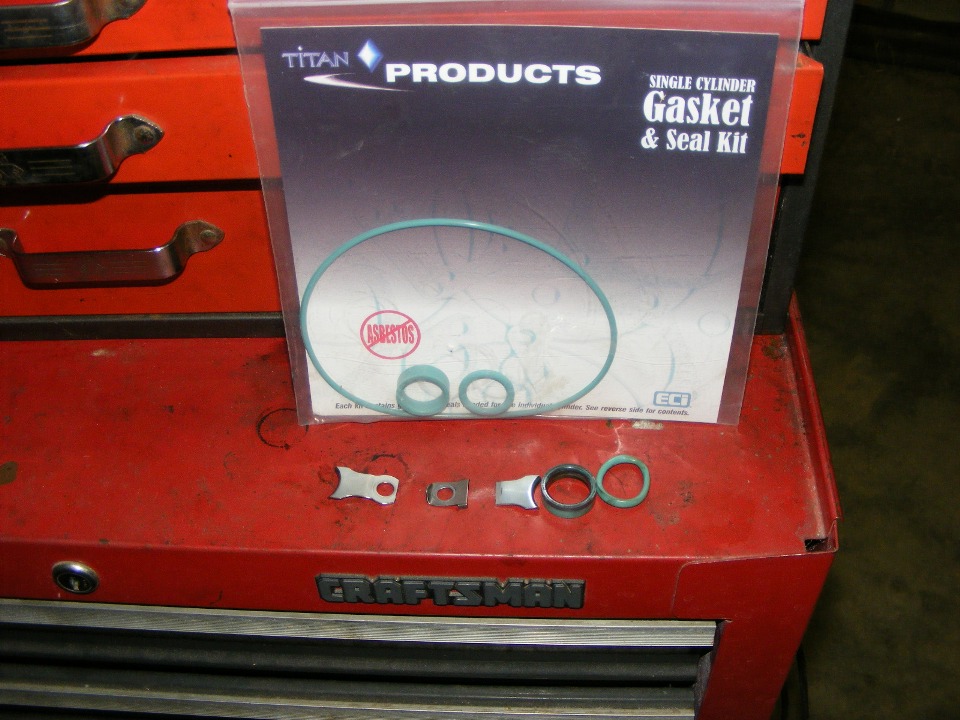 This closer view shows more detail of the metal parts.  The clip on the left is intact, but the clip on the right is broken off and should be the mirror image of the one on the left.  When it broke, the pushrod tube loosend up and began to seep oil at the crank case end as seen on Wendell's Page 88.

As for that other story to relate to you today, click below and go to my PAGE 268 for the photos and details of how aviation and a sermon go together to create a motivational topic.