October 5, 2008:   Sunday was great for flying! I called Marty last night and he was ready to get in the air again.  My day of flying started around 9 AM at Folks Field as usual.  Wendell was cleaning the bugs off his airplane from flying it yesterday.  He had been down to the fish fry fly-in that John Myers holds at his field in the fall of each year.  The temperature was about 58 degrees when I arrived at the hangar.  A mild front passed over the Chattanooga area as you can see by the clouds to the south of our location.  Before I departed, I coached Wendell on setting up his GPS 396 serial port to work with the new software in his Trio EZ Pilot, VHF frequencies from the 396 to the SL-30, and traffic information service (TIS) from his GTX-330 to display on the 396. 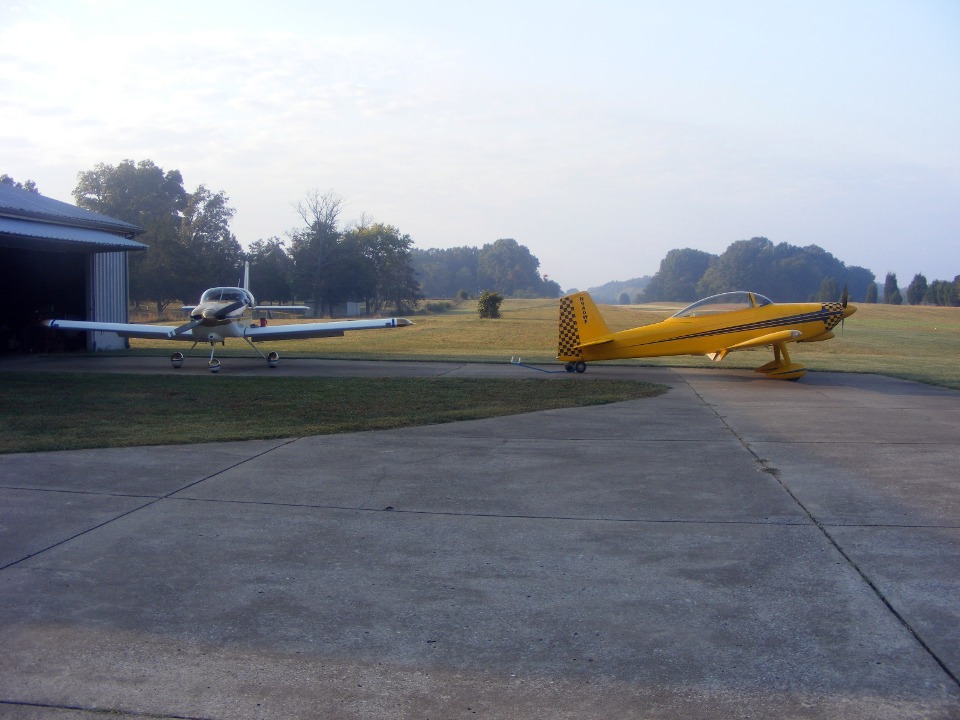 The first flight segment of the day down to Lawrenceville was the usual 42-43 minutes with no appreciable winds blowing either way between 9 and 10 AM.  The sun's rays got my attention and I thought I would share what I saw from 3,500 feet MSL with all of you.  If this were a day to go to Florida, I would be above the broken layer on autopilot and heading for one of my usual South Georgia fuel stops. 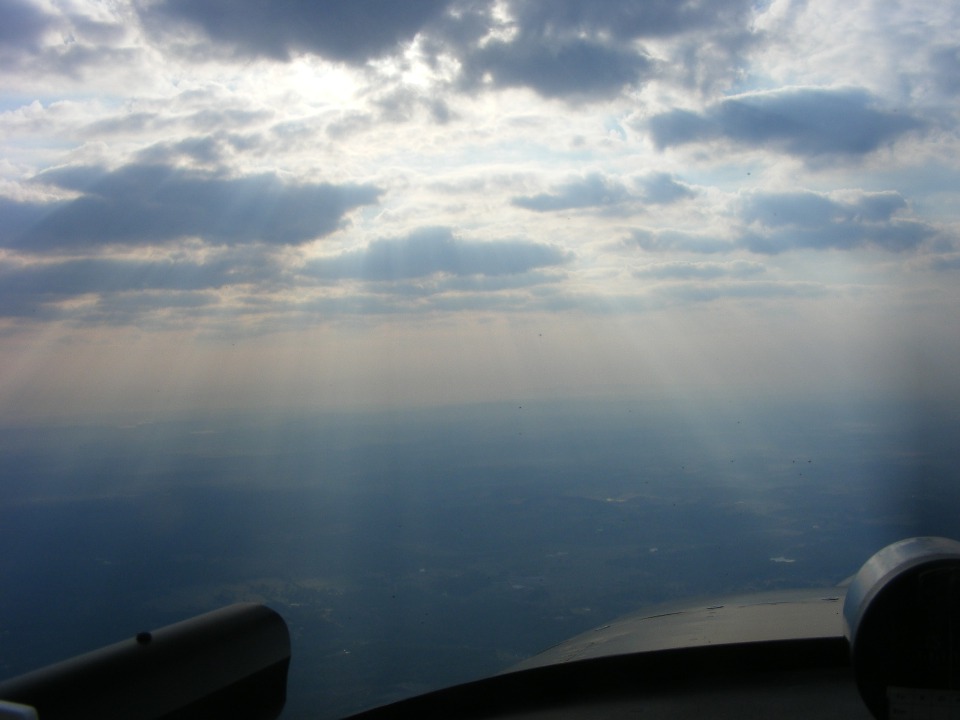 The view looking south tells just how hazy it is along the flight path north of Atlanta this morning. 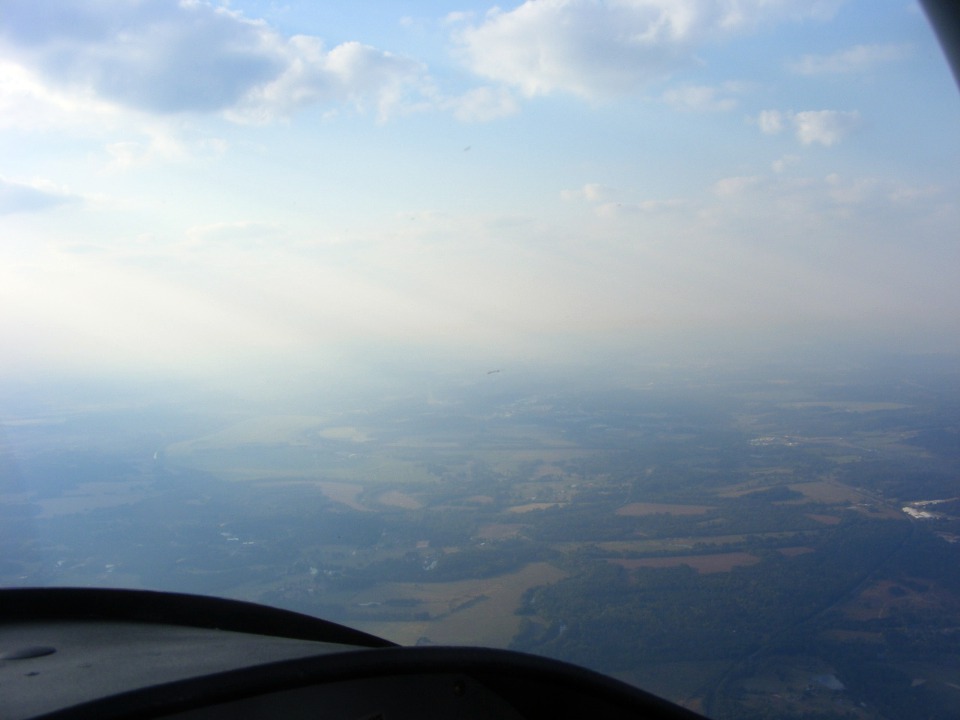 I pulled up in front of the "Flying Machine" restaurant at Lawrenceville to find Marty had been there about 15 minutes.  After he was buckled in, we took off and headed back to the Chattanooga area since he has been wanting to see where "Enterprise" lives.  We made a short diversion over Lake Lanier, the main water supply reservoir for the Atlanta area.  It is still about 10 feet below normal water level.  I snapped this picture while I had Marty flying the airplane. 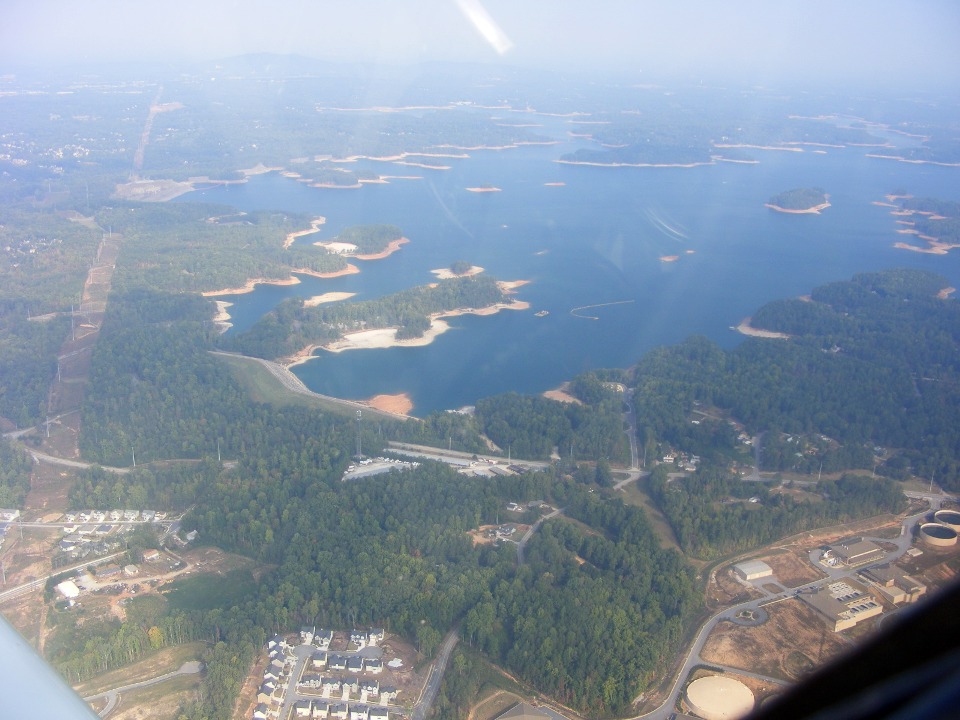 This is the view of the dam and spillway for Lake Lanier.  The high water mark is clearly visible on the side of the dam.  A couple of fishermen are anchored near the dam trying their luck.  With all the power lines in the background, there must be a small power house located here.  A few minutes later, we passed Carter's Lake south of Ramhurst, Georgia near the US 411 highway.  We next flew across my old home town of Dalton, Georgia and started discussing the railroads that pass through there.   Marty started telling me about the Western & Atlantic Railroad and we got into a history lesson about the "Andrews Raid" in 1862 during the Civil War.  I had the good fortune to see the running of the "stolen" steam locomotive "General" on the 100th anniversary of the day Union soldiers were attempting to sabotage the old W&A as a means to disrupt supplies to the Confederate army near Shiloh, Tennessee.  The raiders were planning to burn several key wooden railroad bridges between Atlanta and Chattanooga.  The raid failed due to rainy weather.   Those Union soldiers were the very first men to receive the Congressional Medal of Honor, many of them posthumously.  Disney made a movie about that raid titled "The Great Locomotive Chase". 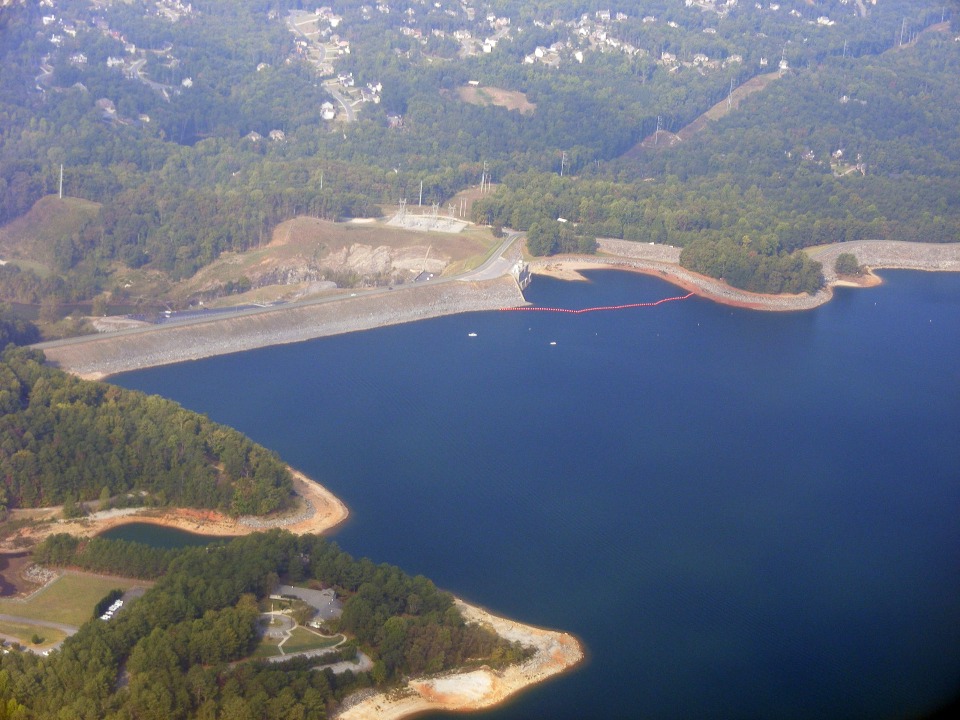 So as Marty and I discussed the history of the area, we followed the railroad past Tunnel Hill, Georgia where the first long tunnel in the south was completed in 1849.   I showed him a few grass landing fields in the area between Dalton and Ringgold and then flew over Wilson Field (GA03) where the "Enterprise" was painted in July 2005. 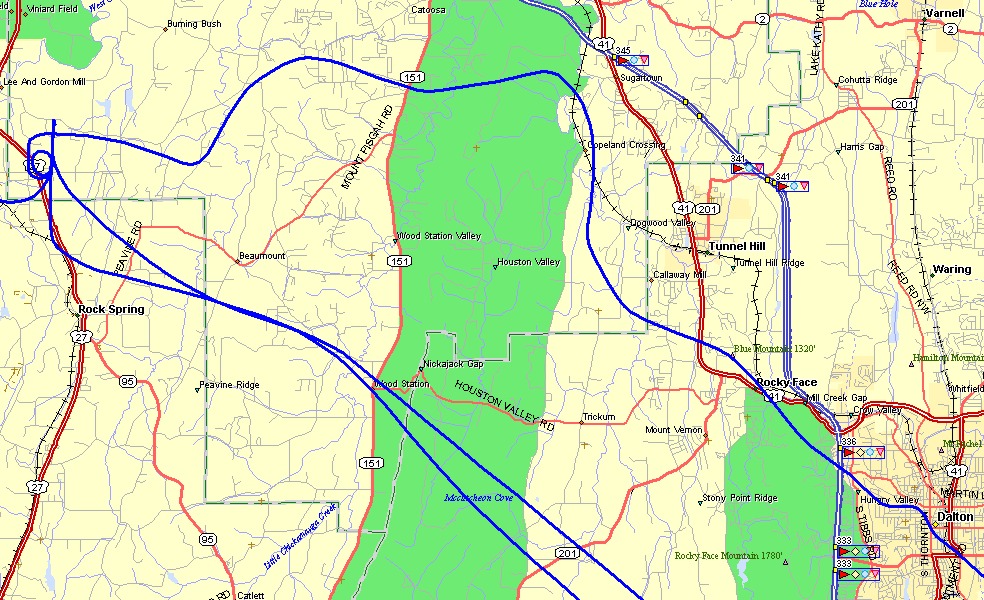 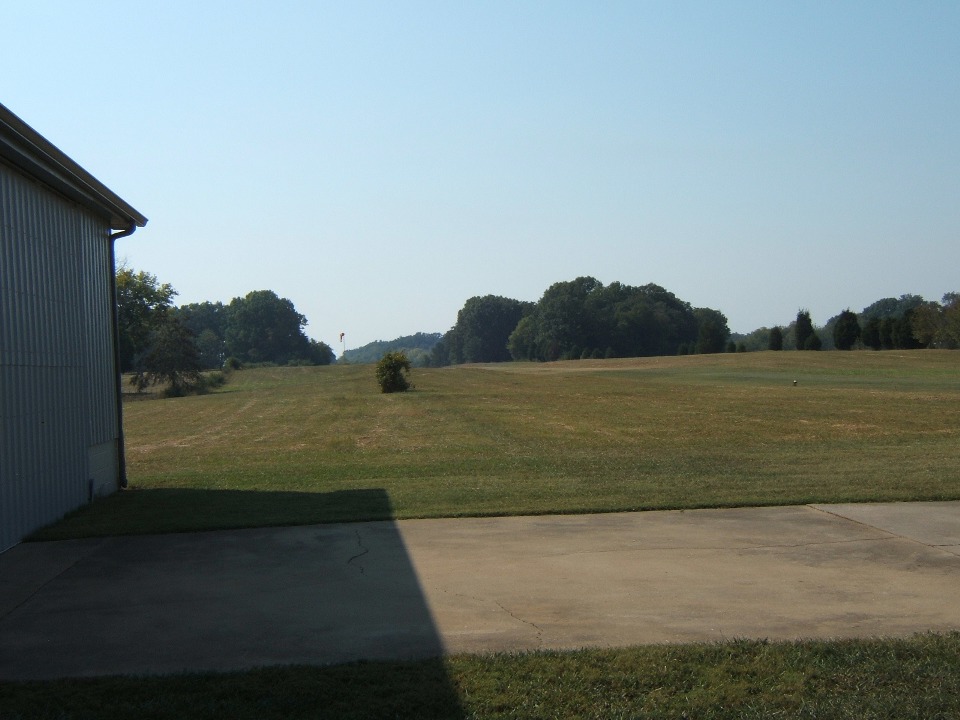 Of course Marty noticed the hangar across the runway with its classic Cessna 172 inside.  I explained how Wendell and Jim each owned half of the runway, divided down the centerline. 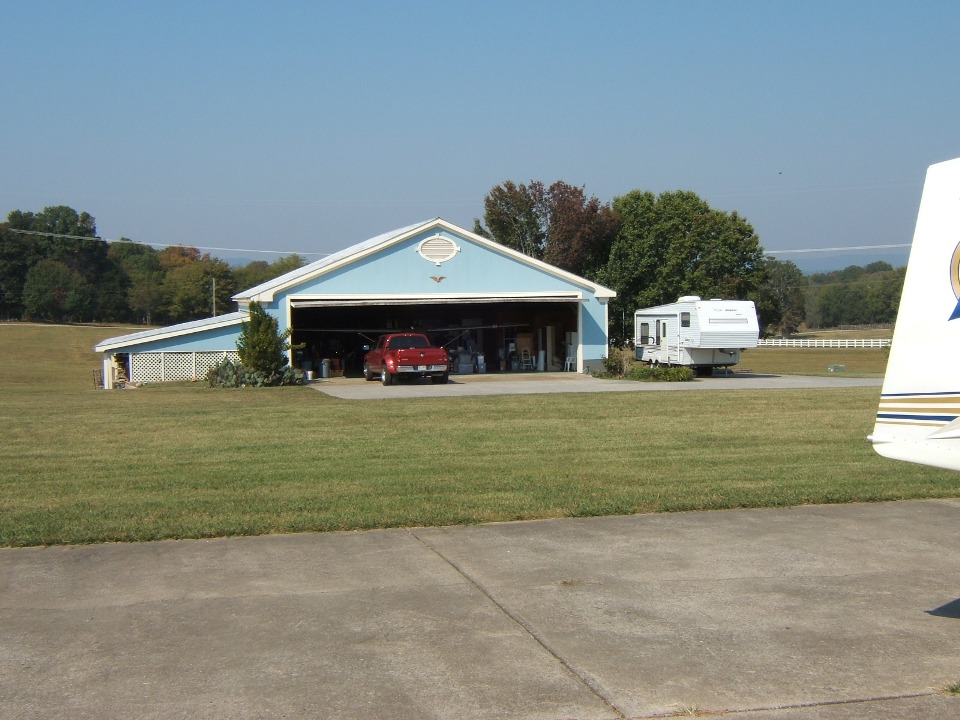 I sometimes forget to take this photo showing Wendell's home at the north end of the property. 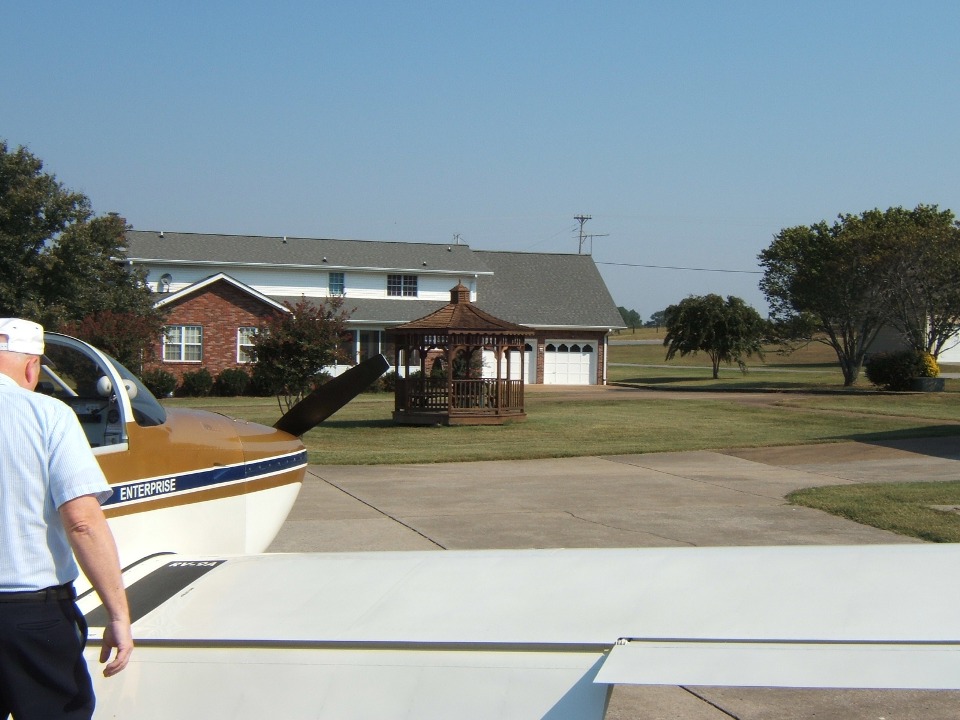 Here is an overview map of the all of today's flights totaling just over 659 miles.  It starts with a direct flight to the Lawrenceville Airport to pick up Marty.   During the return trip, we did some sight seeing over Lake Lanier near Cumming, GA.  The route continued to Carter's Lake south of Ramhurst, GA and over the Dalton, Georgia area.  After our stop at Folks Field, the flight continued up past the tourist areas of Rock City and Point Park at the north end of Lookout Mountain.   Marty took some photos I will be publishing in the next few pages along with my photos.  The flight continued west generally following the Tennessee River and flying over some areas familiar to both of us in NW Georgia, near South Pittsburg, Tennessee, and around parts of NE Alabama.  That flight segment ended at the Pell City Airport for lunch.  The flight segments returning to the Atlanta area included a fuel stop near Villa Rica, Georgia and a flight path over downtown Atlanta before dropping Marty off at Lawrenceville. 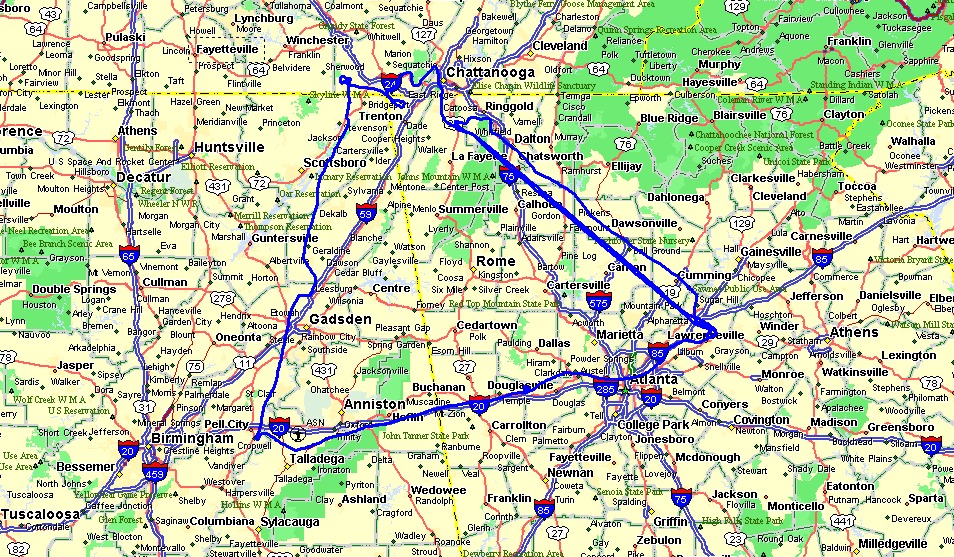