December 6, 2008:  Rich Nadig is heading off the ramp in front of the hangar.  The muffler below is for the Mazda rotary engine which can turn up to 9,000 RPM on take off.  The propeller has a gear reduction drive to keep it in the usual aircraft RPM ranges. 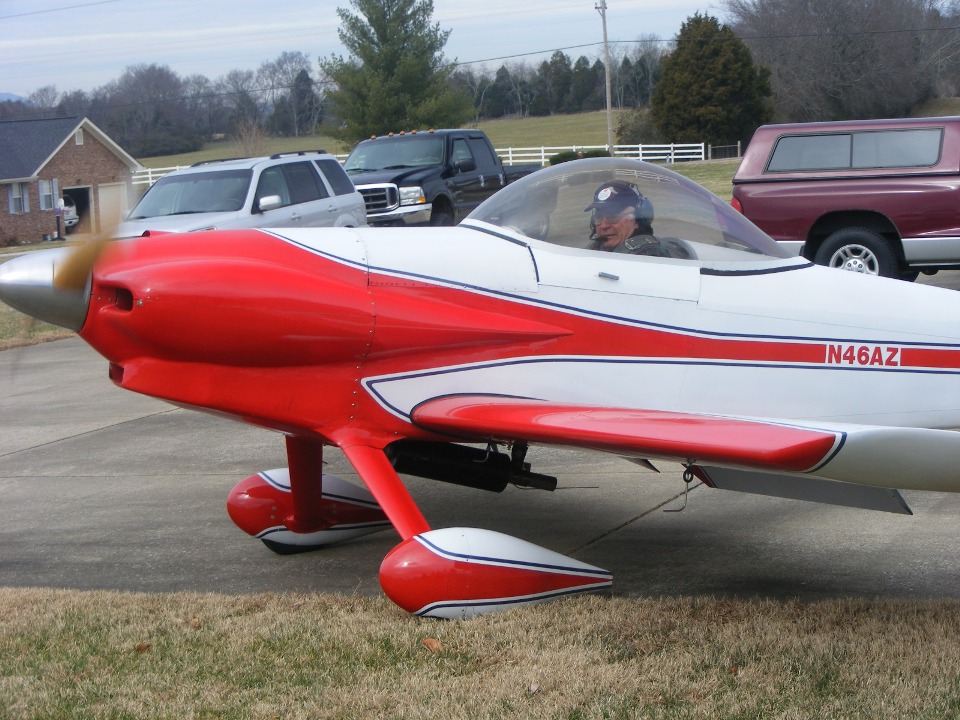 Rich does a quick engine runup before takeoff from the north end of the field. 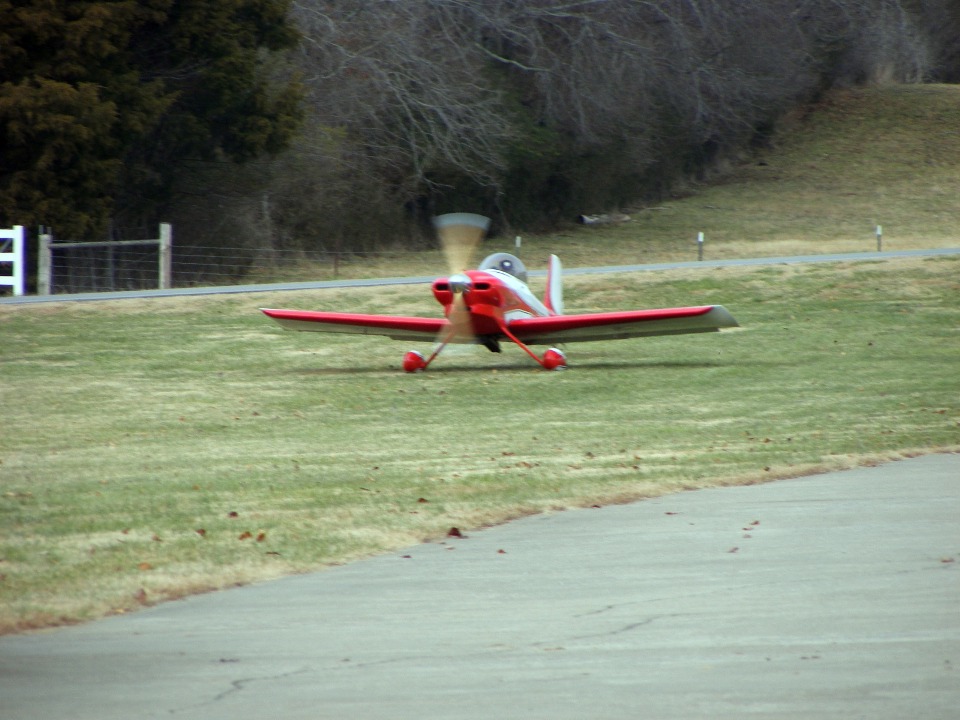 The takeoff run is short, about the same as John Myers got when he departed in his RV-8 earlier. 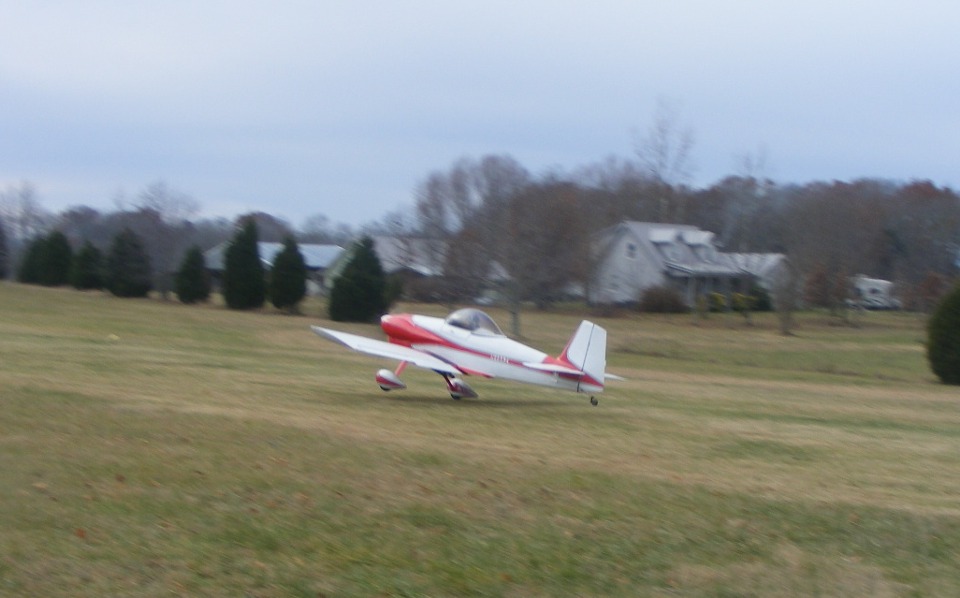 Since Rich was heading back to Collegedale Airport, he made his turn around at the south end of the field and executed his high speed pass about 10 feet above the runway with this fast climb as he approached the ramp area. 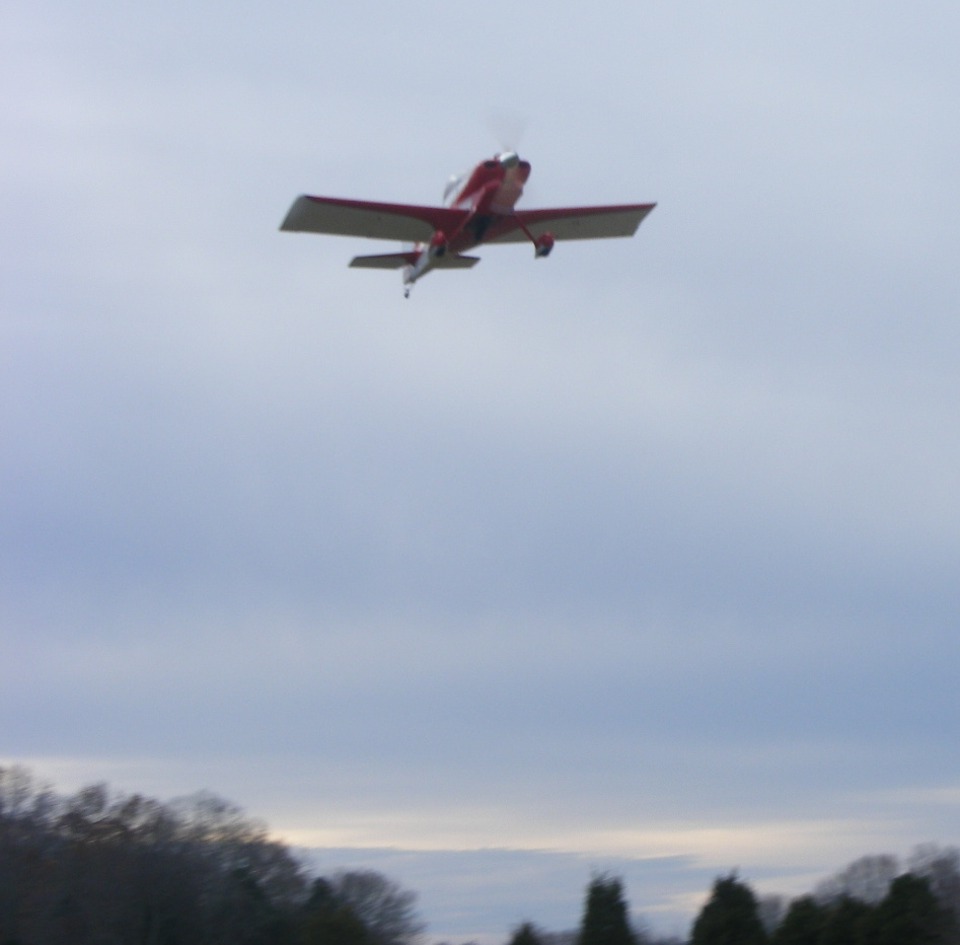 December 12,  2008: I got word late in the day on this Friday that a family member in Florida has suffered a heart attack and survived with a "miracle of events" and no permanent heart damage.  The event occurred just after 4 PM in Jacksonville.  I heard about it not long after.  The medical techs rushed her to the local hospital, where a medivac chopper transported her to the Baptist Medical Center Heart Hospital in downtown Jacksonville.  By 10:45 PM, a triple-bypass surgery was completed and she was in cardiac ICU sedated and on a ventilator.  One of the three arteries repaired had a 99% blockage from plaque.  She had a hip-joint replacement surgery on Monday, December 8th and had gotten out of the hospital from that surgery on Thursday, December 11th.  The heart attack occurred the next afternoon.  Her daughter called me twice on Friday to give me the news of the event and later the results of the bypass surgery.  I was asked to come down on Saturday for moral support and to help with some other affairs regarding post-operative rehab centers in the JAX area.

December 13, 2008:  Saturday morning got off to an early start from home.  I had just over four hours of sleep when the alarm went off at 4:05 AM.  I got a shower, shaved, ate some breakfast, and was on the road at 5:40 AM.  This was a rush trip with Interstate 75 and I-10 the primary routes for today.  The routine for this morning was "gas and go" near home and again in Valdosta, Georgia at a convenience store called "Murphy Express" across the street from the local Wal-Mart and Sam's Club.  The gas price was better there than at Sam's Club.  This is the first time I have seen a convenience store owned and operated by Wal-Mart.

I had passed through downtown Atlanta around 7:25 AM and noticed "Saint Nick" was in the car behind me when I-75 and I-85 merged just north of Georgia Tech.   He had a wonderful beard and long white hair with his red and white suit on as he drove to work at a department store in the Atlanta downtown area.

I had a quick lunch around 11:30 AM at a Subway sandwich shop in Lake Park, Georgia at I-75 Exit 5.  I arrived at the hospital adjacent to I-95 and the Saint Johns River in Jacksonville a few minutes past 1 PM.  The time enroute via the old Caddy was about 7.5 hours with only five stops along the way for comfort, fuel, and food one time.  The RV-9A stayed at home this trip since the weather was going to be bad for a return later in the week.  I also wanted to keep costs down with no airport tie-down fees or rental car to worry about.

December 14, 2008: This helicopter landing pad is in front of the heart hospital wing of the Baptist Medical Center.  I was going to my car on level four of the parking garage when I heard the helicopter approaching with another patient.  I grabbed my camera and took these two photos during the approach from the west and landing. 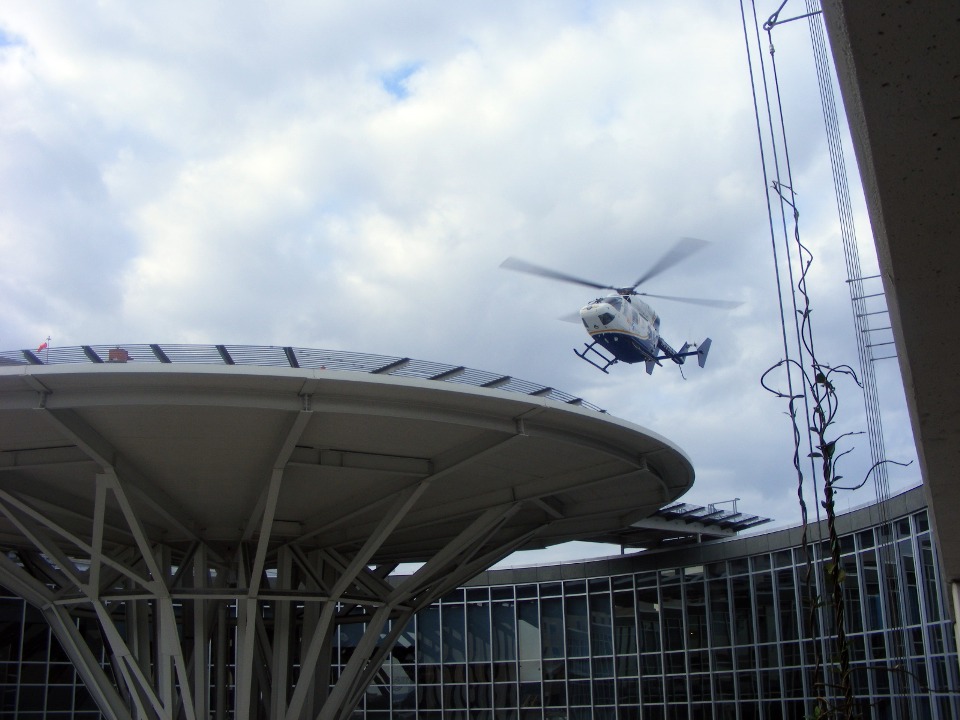 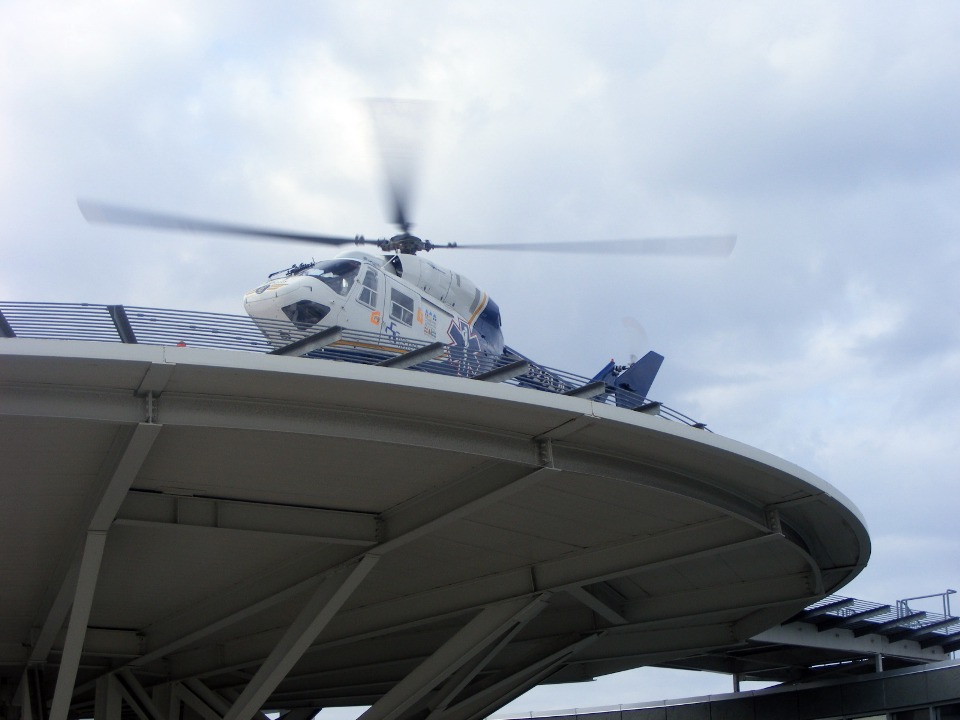 I went up to level six at the top of the parking garage to get this photo after the medical air crew had taken the patient inside the building.  The pilot was doing all the steps for engine shut down as I snapped a few photos. 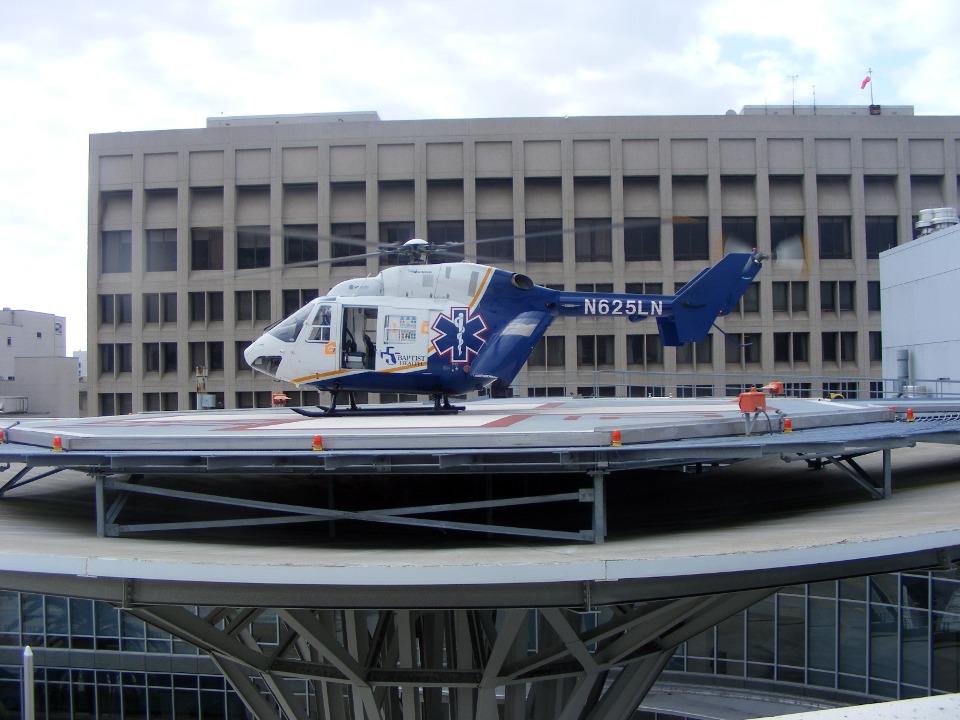 This view shows the Interstate 95 highway bridge over the Saint Johns River in the background. 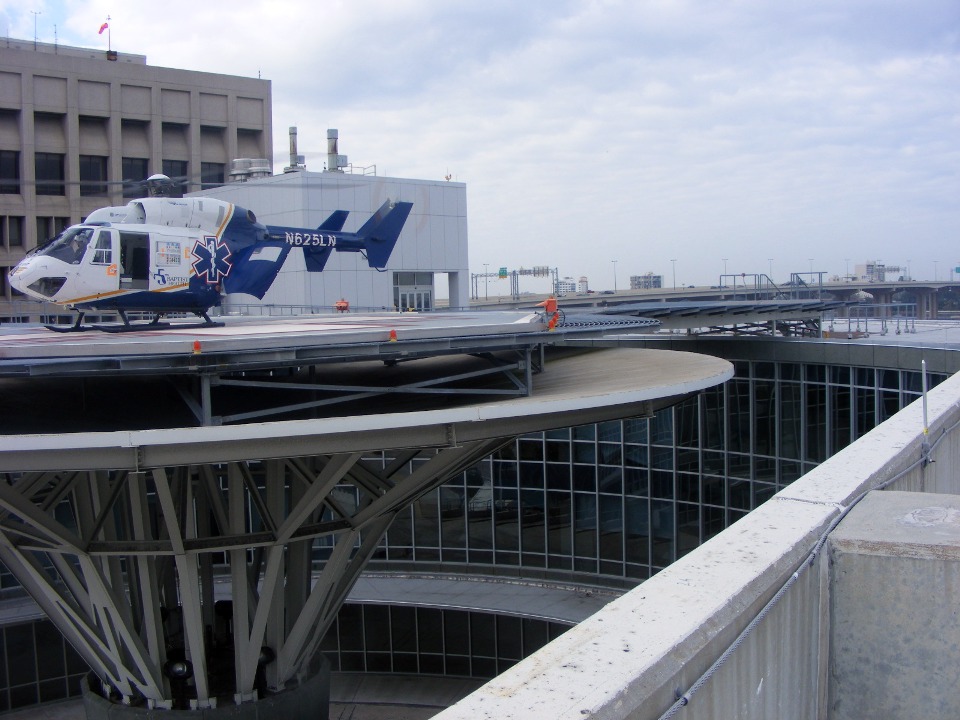 I liked this telephoto zoom view of the pilot during the engine shut down process. 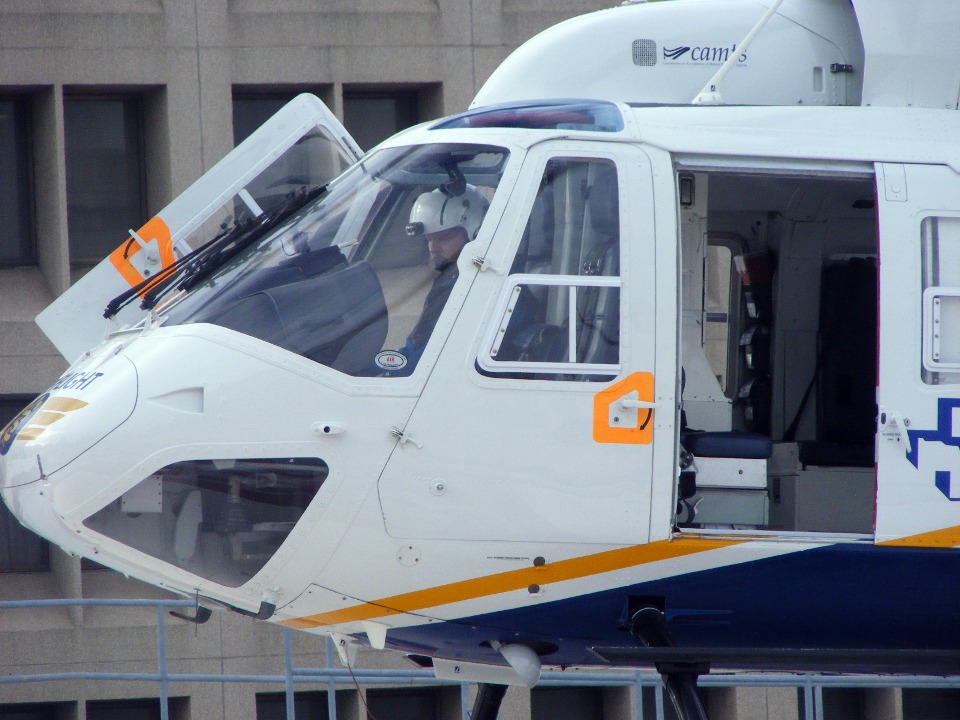