December 20, 2008:  I made it home at a reasonable hour last night and found this Saturday morning to be a normal one indeed.   I went over to the hangar to install my Garmin AT SL-30 NAV/COM radio in my RV-9A.   When I got there, Wendell and his usual Saturday morning gathering were there.   His young commercial pilot neighbor across the runway was about to assemble a doll house for his little girls.  I love a puzzle and offered to help.  Here is the end result inside the "airplane factory" workshop where we built Wendell's RV-8. 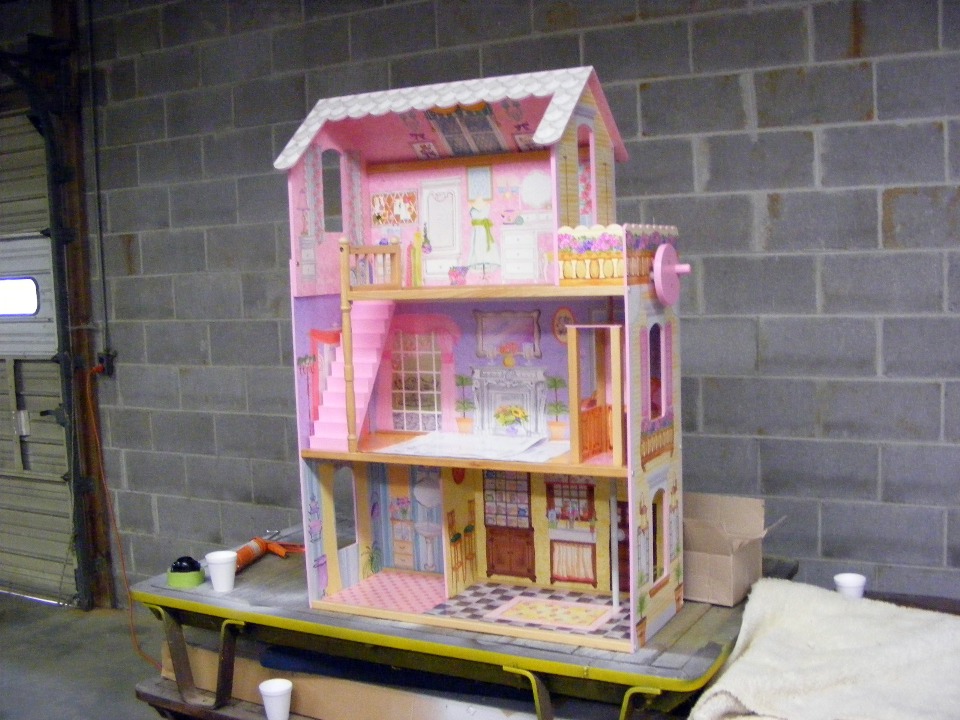 The social hour continued during the assembly of the doll house and afterward as you can see here. 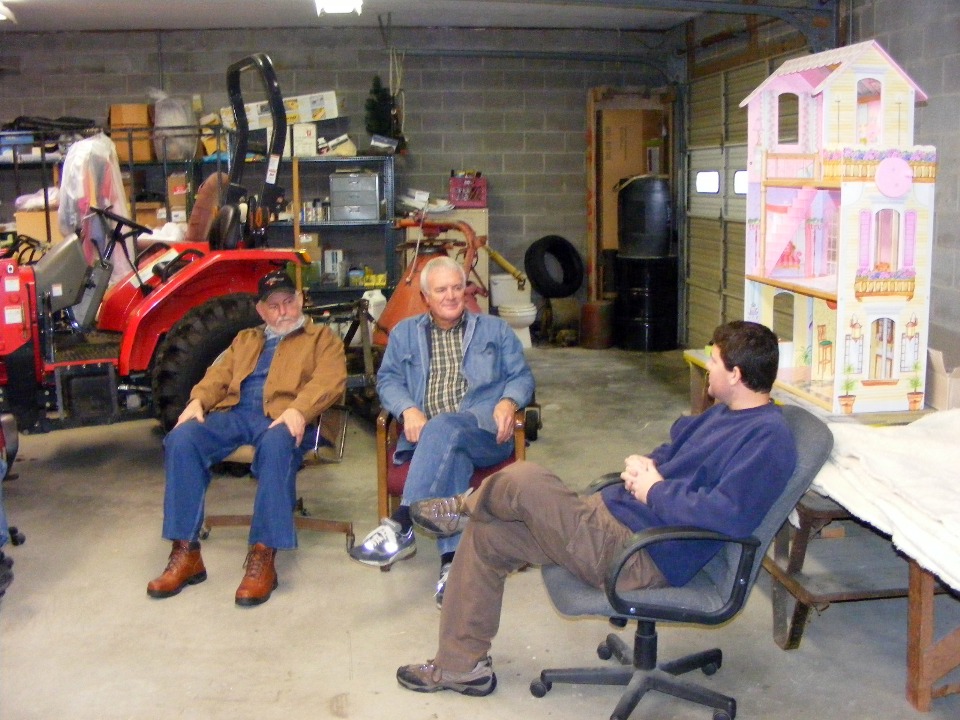 After finishing the doll house, I went over to the hangar and checked out my SL-30 as I installed it in my airplane.  The NAV audio volume was set at maximum and required a little "computer" adjustment in the setup menu to keep from blasting my ears in the head phones.  I made a couple of transmissions on the air-to-air frequency of 122.75 MHz using my walkie-talkie and the COM radio of the SL-30.  All is good again in the "Enterprise".  Uhura, open hailing frequencies.

December 21, 2008:  It is Sunday morning and I had hoped to get a flight in my airplane down to Peachtree City to meet up with my son from Texas.  He is in the Atlanta area with his wife and my grandson for the holidays.  We had clear weather here today.  The runway was still wet from the soaking rain that came to the Chattanooga area over the past few days.  Then of course there was also a problem with strong gusting winds from the passing cold front even if the mud and water had not been an issue for takeoff and landing.

I cut up those two "oranges" I brought home from central Georgia.   I was told by the lady who owned the home with the citrus tree that the "oranges" tasted like lemons.  Take a look at this one I picked fresh from the tree.  It has a few "warts" on it but it had a nice "orange" smell. 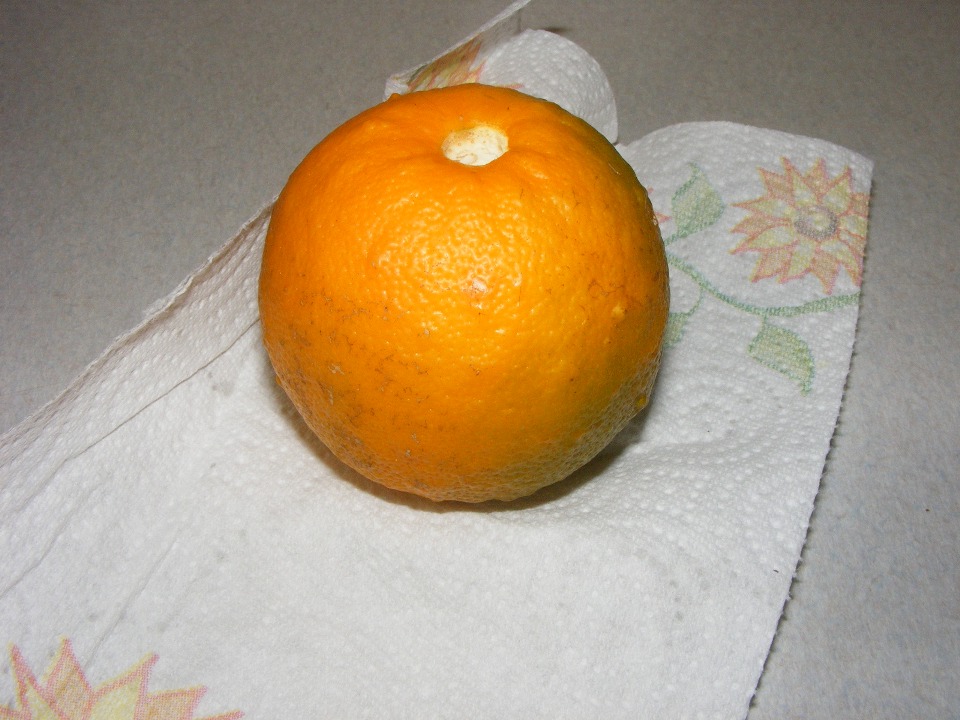 The inside of the "orange" was more like a lemon or grapefruit in color.  I touched my finger to the juice, and it sure tasted like lemon.  I rooted out all the seeds, some of which will go to a friend.  I lived in Florida for 24 years, much of that time in the Citrus areas of the state.  I have heard that the orange trees in the professional groves in Florida are all grafted to a slightly different root to produce the flavors we all love to eat.  This one is very bitter, but it survives frost. 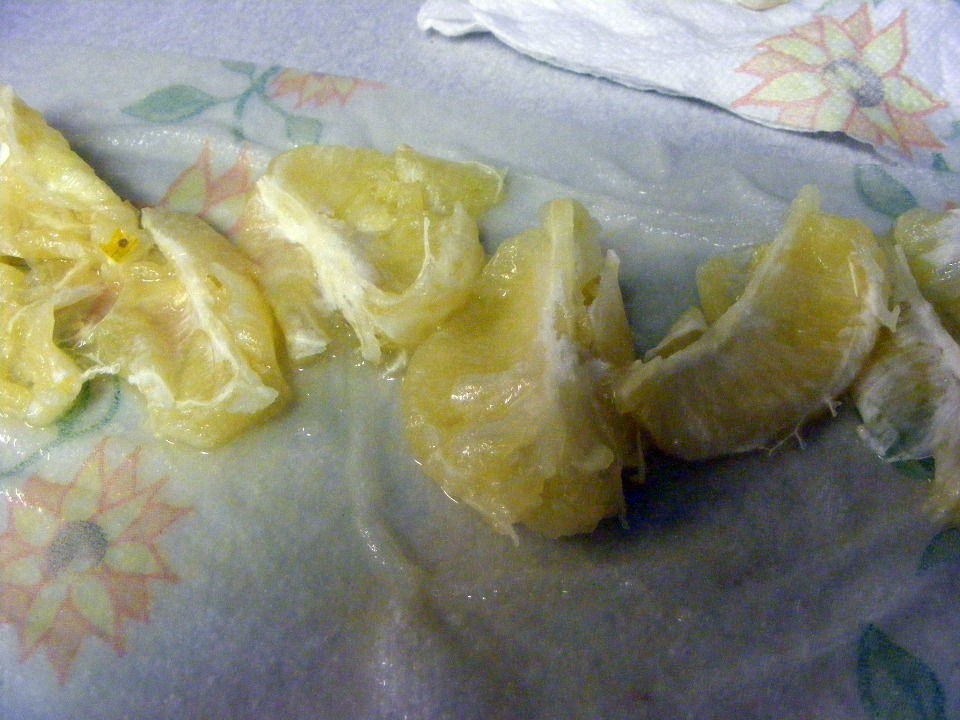 The weather for the next few days is not expected to be suitable for flying.   The forecast for tonight is for a low temperature in the 17-degree range. The highs are expected to be in the low 60's in a few days.  At this time of year, we are either warm and wet, or "cold, windy, and dry".  Today was cold, windy, and dry.  It was a good time to start updating this web site.

December 25, 2008:   Christmas Day has come again with nice weather here in Chattanooga.  The weather is clear outside and why am I not flying?  The one place I want to go is not having good weather.  My oldest son is in the Atlanta area and the weather there is less than ideal.  The forecast for Saturday has possibilities for a good flight down to Peachtree City (KFFC) for lunch and some local flying around that part of the Atlanta Class B airspace with my son, who is also a pilot.

When I went over to visit Wendell yesterday afternoon, I had a chance to finish the volume control setup of my SL-30 NAV/COM radio.  All the audio levels are now slaved to the variable control on the front of the unit.  I now have easy in-flight control over all the audio volume settings.

I also helped Wendell finish up the battery access door on his rear baggage floor / battery cover plate.  The details and three photos from that work session are on Wendell's new PAGE 89 in his section of this web site.

January 1, 2009:  Have a Happy New Year's Day flight and see family.  What can I say?  It was fun.  I went over to the airport and sat with Wendell as he worked on getting his repainted wheel pants ready to put back on his RV-8.  I called my youngest son to be sure he was out of bed after last night's parties.  I called him just a few minutes before he was going to call me.  I took this photo looking East on the first flight leg of the day.  This was just after I got into smooth air heading out of the Tennessee Valley area.  The headwinds were in the 15 to 25 MPH range depending on my heading.  The sun angle on the canopy illuminated the fact that I need to clean the canopy on the INSIDE and outside. 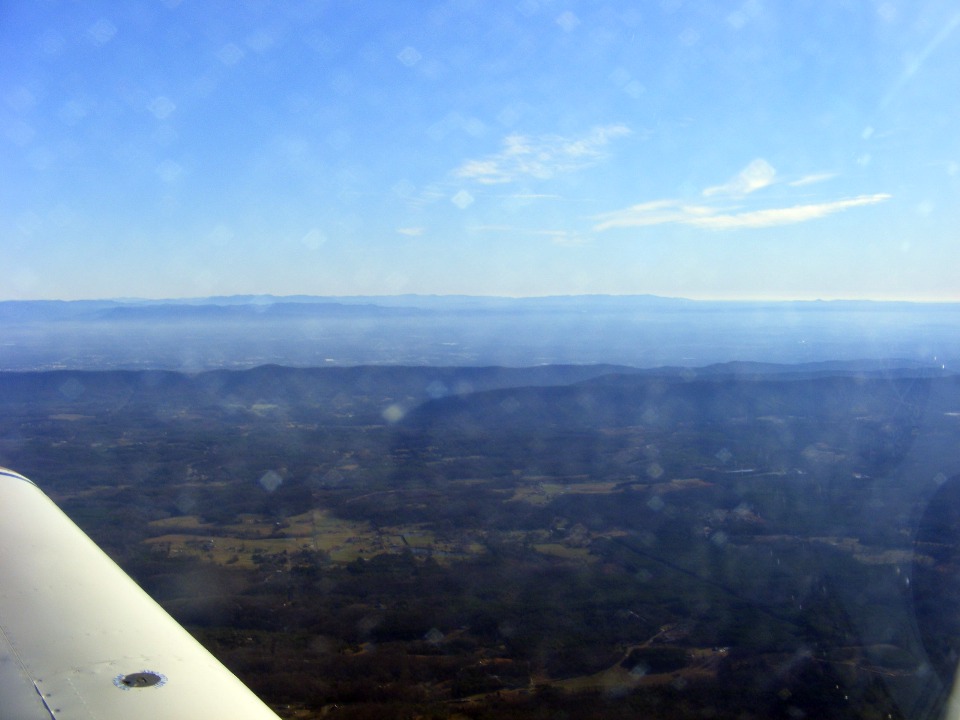 I took this photo just after the one above while looking south.  It shows how the ridges separate several small valleys just West of Calhoun, GA. 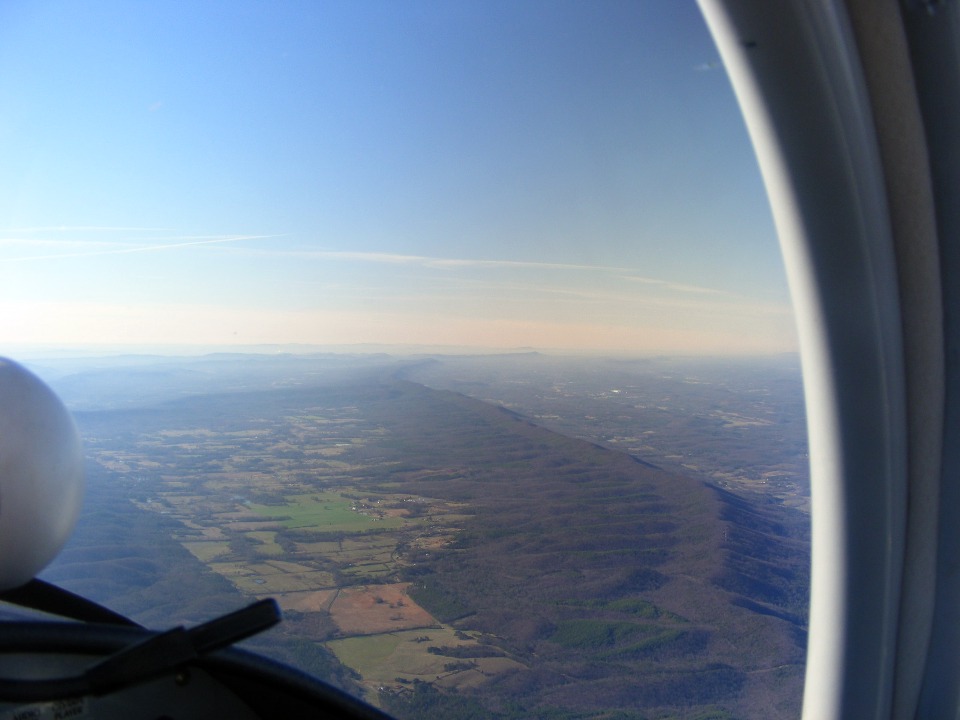 I took off at 10AM and arrived at McCollum Field (KRYY) at about 10:30AM.   The landing on runway 9 was a short one due to the 15 to 20 MPH blowing headwind.   Even with the displaced threshold here, I made the first turn off to the ramp after the touchdown zone with little use of the brakes.  My friend Dale took this photo back on August 17th as we flew the same runway approach at KRYY. 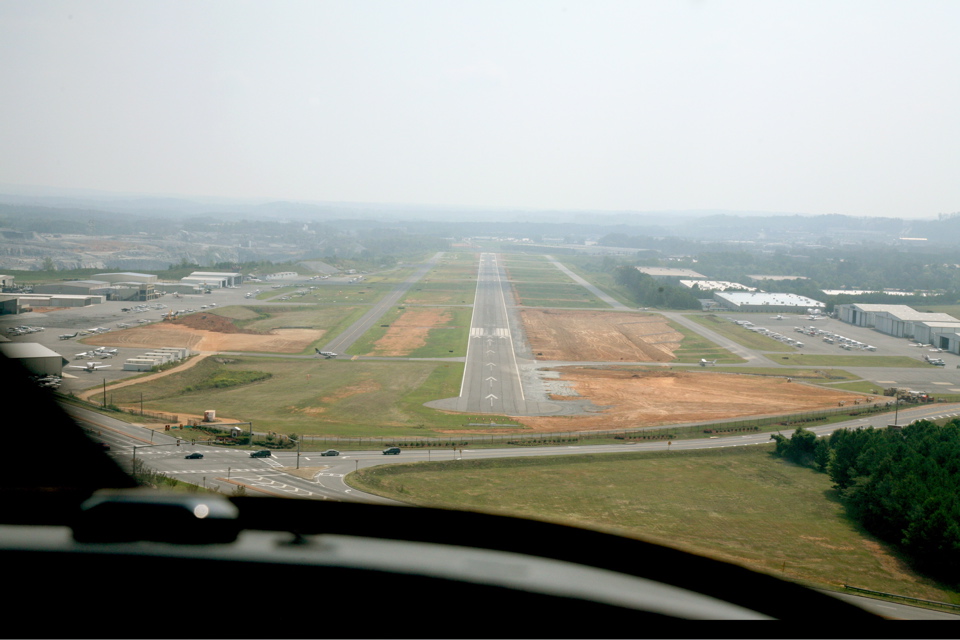 Marshall was waiting for me on the ramp at Northside Aviation.  I did not have to get out of my seat after engine shut down.  He last flew with me on October 18th and knew how to get aboard properly and get buckled into his seat.  The ground stop was no longer than five minutes.  Before engine start, I called my oldest son Edward to advise him of our expected arrival at Peachtree City Airport just after 11 AM.  Marshall took this telephoto snapshot from the right seat looking East at the Atlanta skyline and just a glimpse of Stone Mountain in the hazy background beyond the city.  This photo was taken about 15 minutes after our departure from McCollum Field while flying southbound at 3,000 feet MSL, under the middle layers of the Atlanta Class B airspace on the West side of the Atlanta metro area.   The floor of the Atlanta Class B airspace is 3,500 MSL at this location. 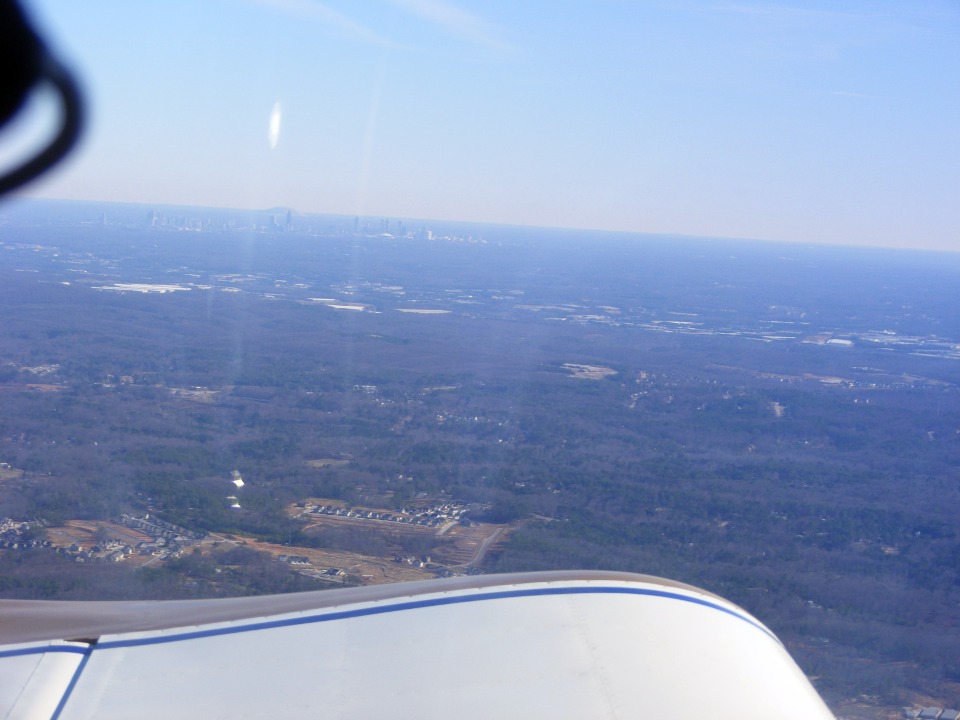 We tied down the airplane on the ramp at Falcon Field, Peachtree City, Georgia.   My son and his family were waiting inside the terminal and out of the cold steady winds outside.  The Atlanta Bread Company restaurant was open today, just about three miles north of the airport.  I got this snapshot of my grandson Ian, just as Edward was about to take his photo as well.  What you don't see in this photo is the electronic game Ian is using just below the table top. 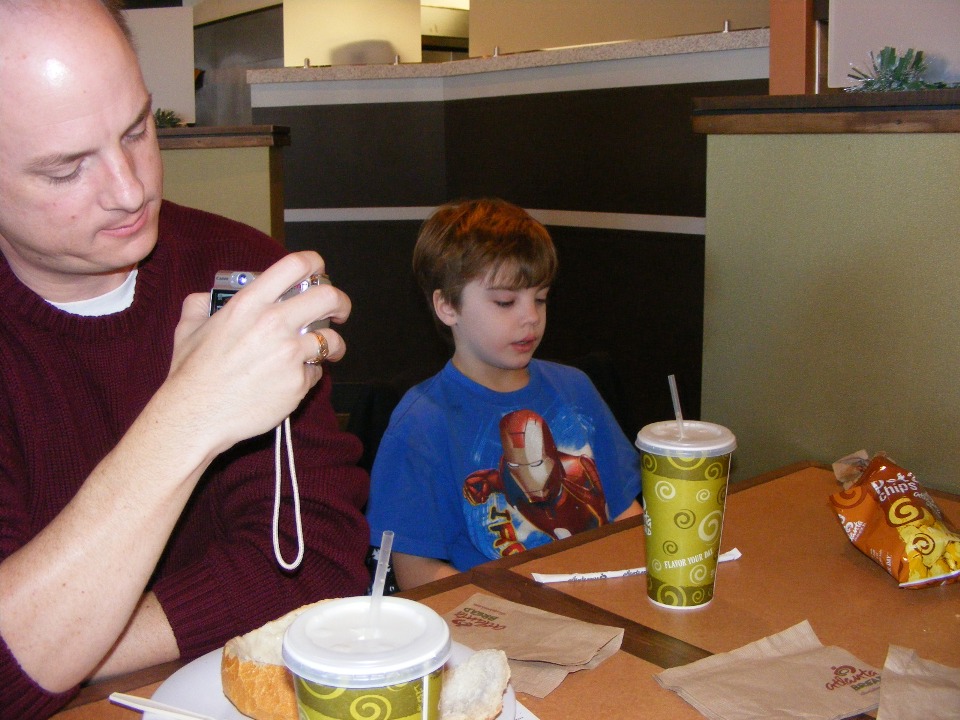 Marshall mugged for the camera just as I snapped this photo.  It reminded me of the kind of faces made by George Carlin in his comedy routine.  This is the first photo I have taken of Edward in a long time.  He has lost 30 pounds while training for Tae Kwan Do over the past few years.  He is a second-degree black belt instructor now.  And yes, the RED CUP gets another ICE WATER refill before leaving the restaurant. 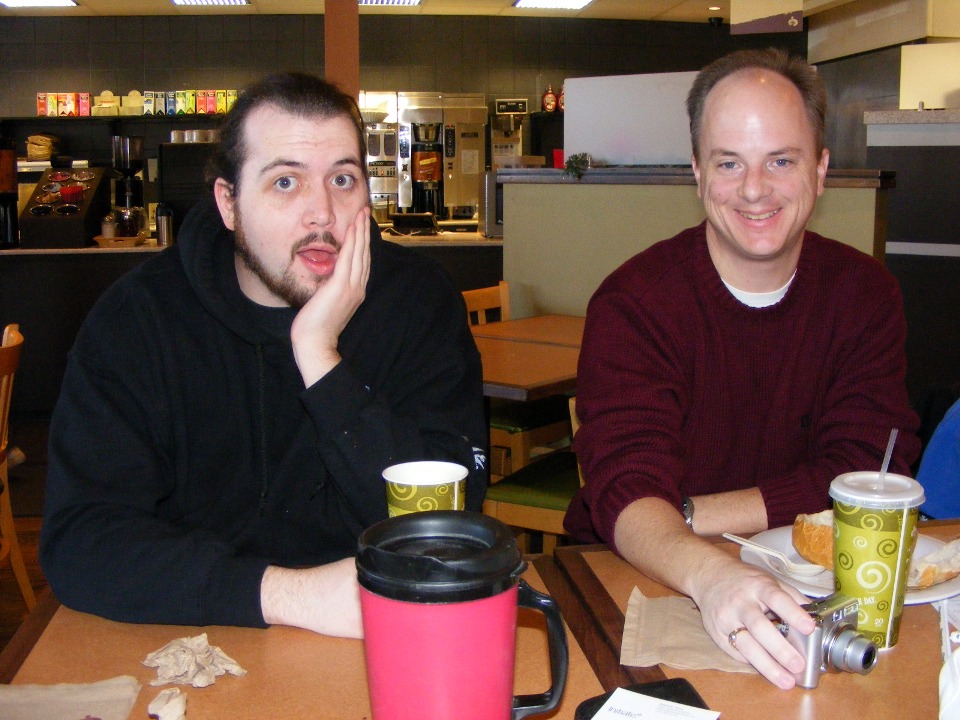