October 3, 2009:  Finally, a beautiful Saturday with a nearby fly-in and lunch to attend.  I called my friend and former Navy pilot Marty Mason earlier this week when the forecast for Saturday started to look really good.  Before I could ask him if he wanted to go flying, he told me about the weather and suggested we get in the air again.  I was over at the air field early this morning before sunrise.  I was surprised how quickly things got brighter at about 7:35 AM.  I rolled out Wendell's RV-8 and got my RV-9A packed for the day and out of the hangar.  I called Marty at 7:44 AM just before engine start.  By the time I finished my engine runup and pushed the throttle to full, it was 7:50 AM.  I took this photo at 7:55 AM as I crossed the first ridge and discovered this ground fog in the valley where Dalton, Calhoun, and Cartersville, Georgia are located.  And yes, those low mountains pushing above the cloud banks are at the southern end of the Appalachian Range.  A short time later, I leveled off at 5,500 feet MSL and found I had nearly a 30 MPH tailwind!  I dialed up the ATIS at Lawrenceville (KLZU) where I will be picking up Marty for the ride to Alabama.  The visibility was clear at the Lawrenceville Airport.  The ground fog cleared up below me when I was about 25 miles from KLZU. 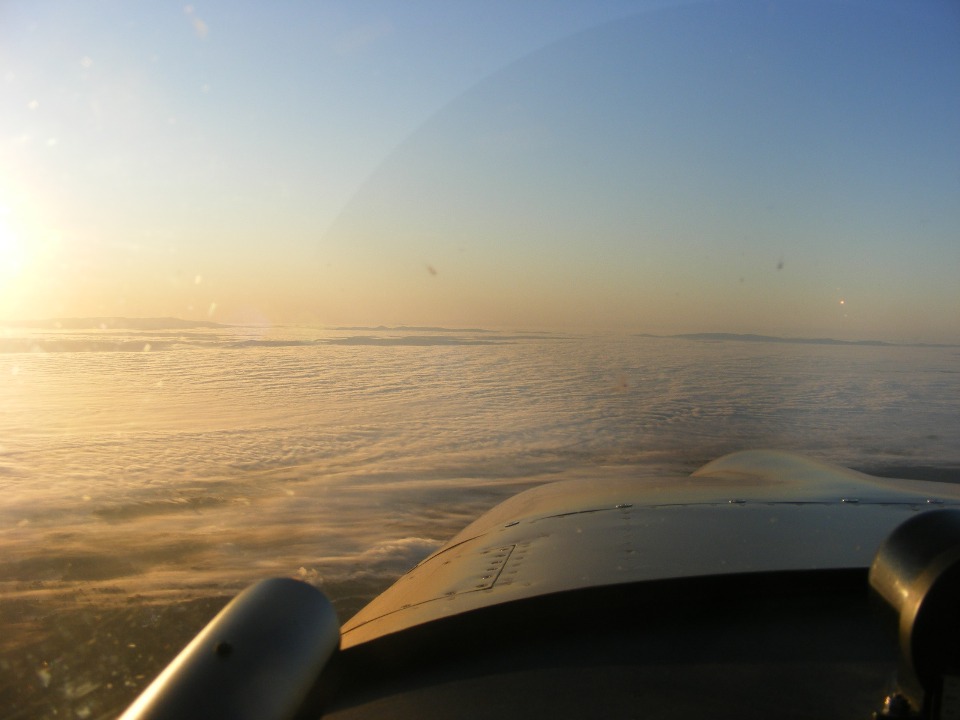 I landed at 8:30 AM and taxied to the row of hangars where the EAA has their hangar.  They were having a pancake breakfast on this Saturday.  I had met Marty there on previous occasions.  When I turned on my cell phone, I had a message from Marty where he tried to call me at 7:53 AM after I was in the air. I called him to discover he was across the field at the gate by the restaurant.  I cranked up and contacted ground control to head over to the other side of the field.  It wasn't long before we were in the air and heading west.  This photo taken at 9:05 AM shows some of the remaining ground fog about 15 to 20 miles west of the Lawrenceville Airport.  I stayed at 3,500 feet MSL to keep the headwinds down to around 15 MPH. 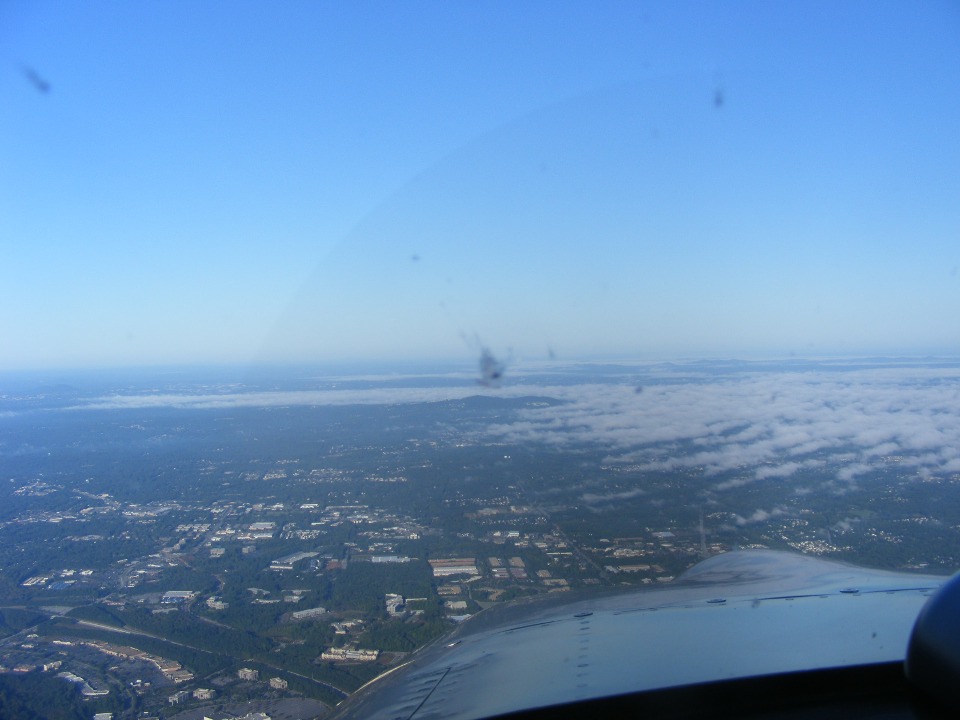 This photo of Lake Allatoona below was taken at 9:14 AM still showing some ground fog in the area near Cartersville.  The lake is full and signals the end to the drought conditions that persisted here for the past few years.  You may have seen the news coverage of the flooding in this area a few weeks ago.  This region got over 24 inches of rain in a 24-hour period.  As you have seen on my previous web page, we did not get that much rain near Chattanooga, Tennessee. 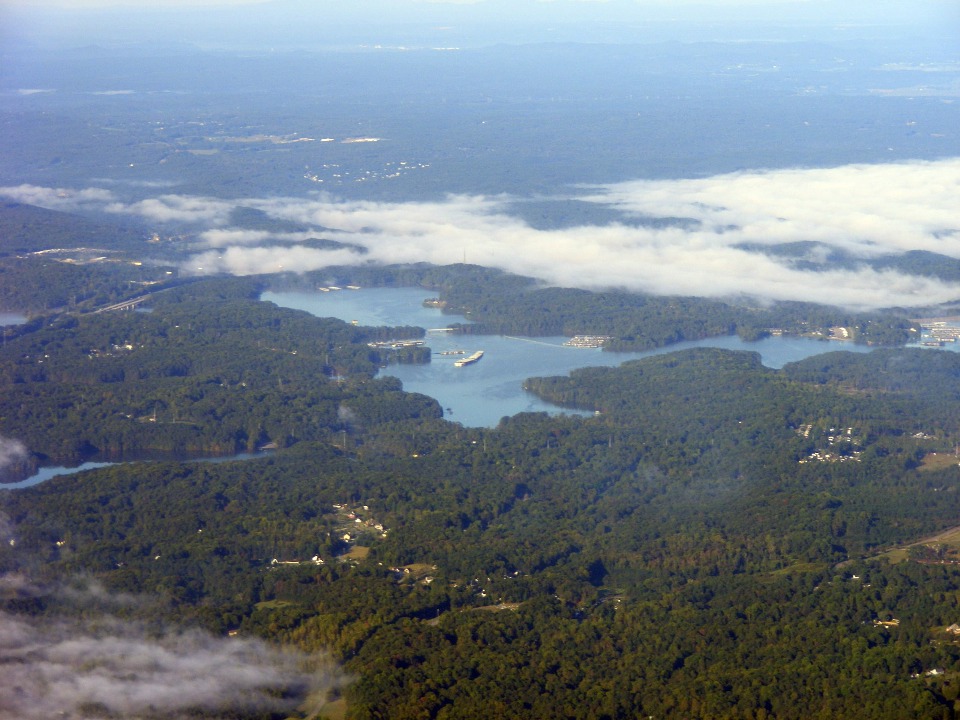 The little town of Coosa, Georgia is west of Rome on Georgia state highway 20.  This coal-fired power plant is on the banks of the Coosa River.  The river is formed by the convergence of the Oostanaula and Etowah Rivers in the downtown area of Rome.  This river eventually joins the Tallapoosa River north of Montgomery, Alabama to become the Alabama River. That river empties into the Gulf of Mexico near Mobile, Alabama.  This photo was taken at 9:32 AM and we are still about 17 miles from our destination located northwest of Cedar Bluff, Alabama. 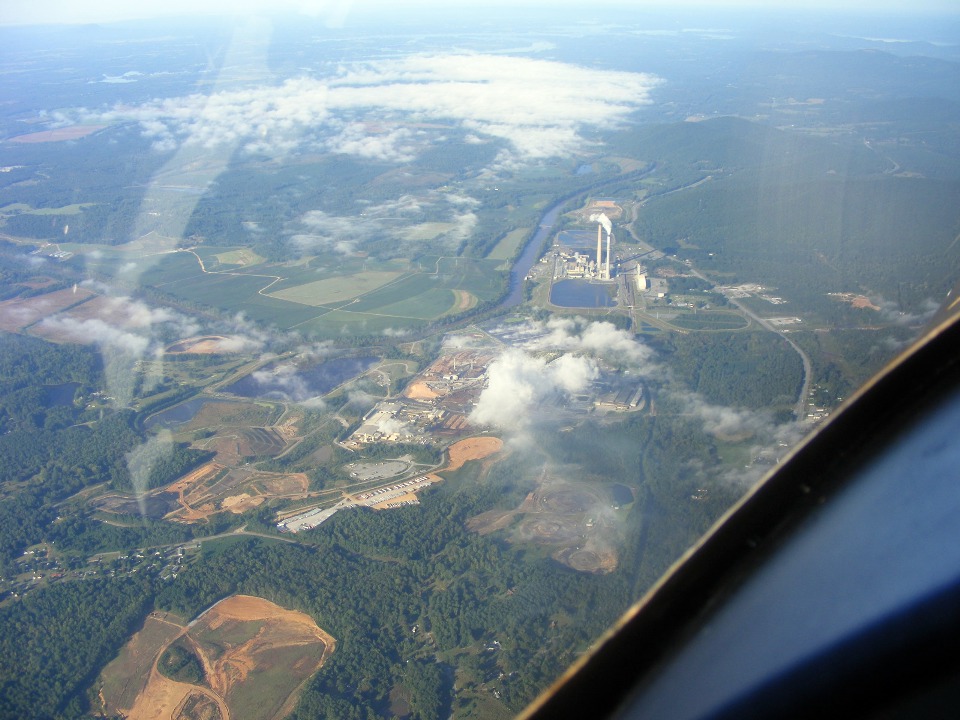 Marty and I arrived as the first airplane this morning.  I noticed John Myers flying his RV-4 when I entered the pattern for a landing.  I took this photo as Wendell and Ron Knowles arrived at 9:56 AM Eastern Time.  Now that we are in Alabama, the local time is 8:56 AM Central Time.  Rich Nadig flew with Wendell down here, but I took this photo before Rich was parked on the other side of Wendell's RV-8.  Rich brought his Harmon Rocket to a grass field for the first time today.  This was the first time Marty met Wendell.  I had previously brought Marty up to our home field on a day when Wendell was out of town. 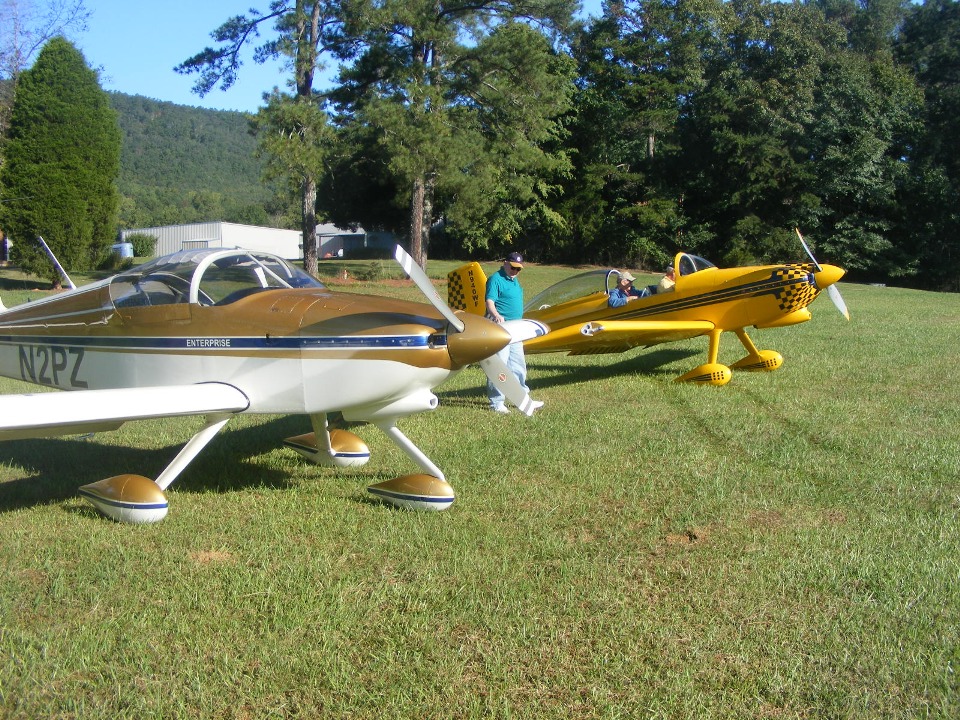 As more aircraft arrived, the pilots started to socialize and exchange stories.   The man on the left is a doctor from Fort Payne, Alabama.  He is talking with Ron Knowles in the blue denim jacket.  The doctor provides FAA physicals for the area pilots around Fort Payne.  Wendell asked him how many babies he delivered over his many years of service.  The number he gave was about 15,000.  He pointed to a Piper J-3 Cub airplane across the field that he gave to his daughter when he quit flying a few years ago.  She is a pilot, too.  One of four autogyros that came is visible in the background of the photo below.  There was one helicopter arrival, but it parked on the other side of the runway north of the luncheon area.  John Myers is hosting today's fly-in.  That is him at the center of the photo talking to the lady with white hair.  He gave Wendell (yellow shirt) a Flying M hat with Wendell's N-number on the front. 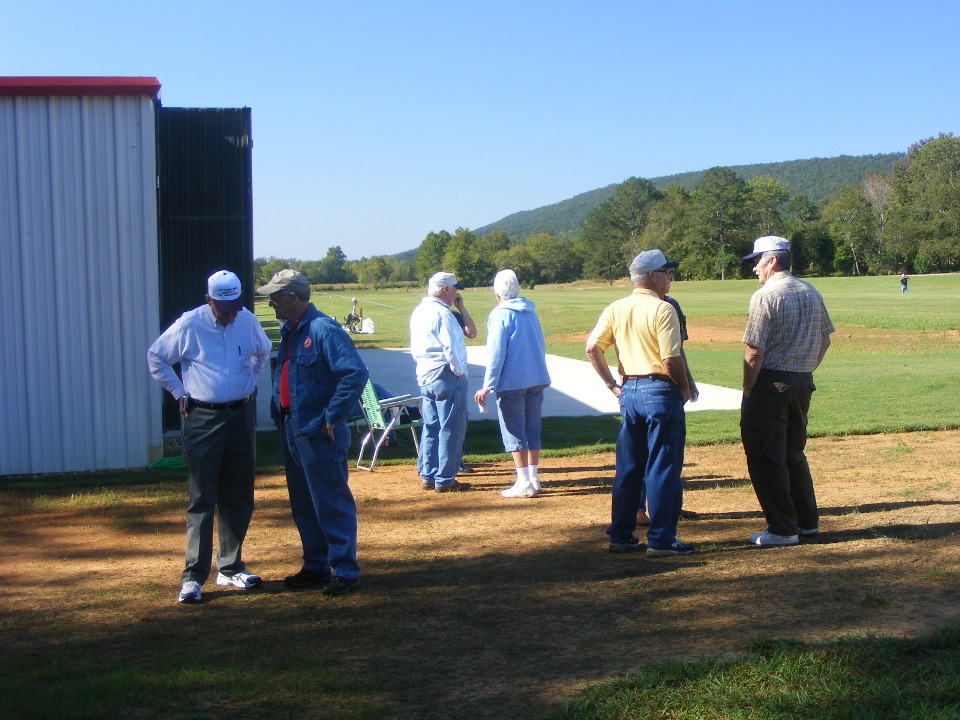 Marty started taking photos of the field from in front of John Myers New Hangar.  John left his RV-4 parked up by the wind sock.  This photo also shows how the runway is lined up with the valley floor. 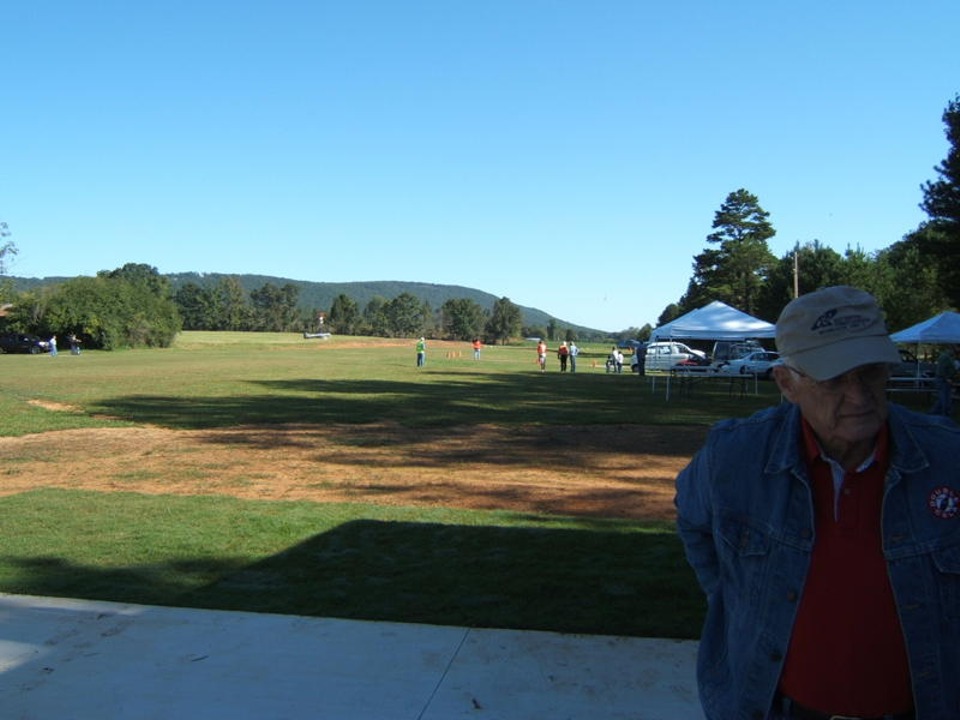 Marty's second photo shows the arrival of a 2-seat auto gyro.  This one is a "Twin Eagle Plus" powered by a Subaru engine. 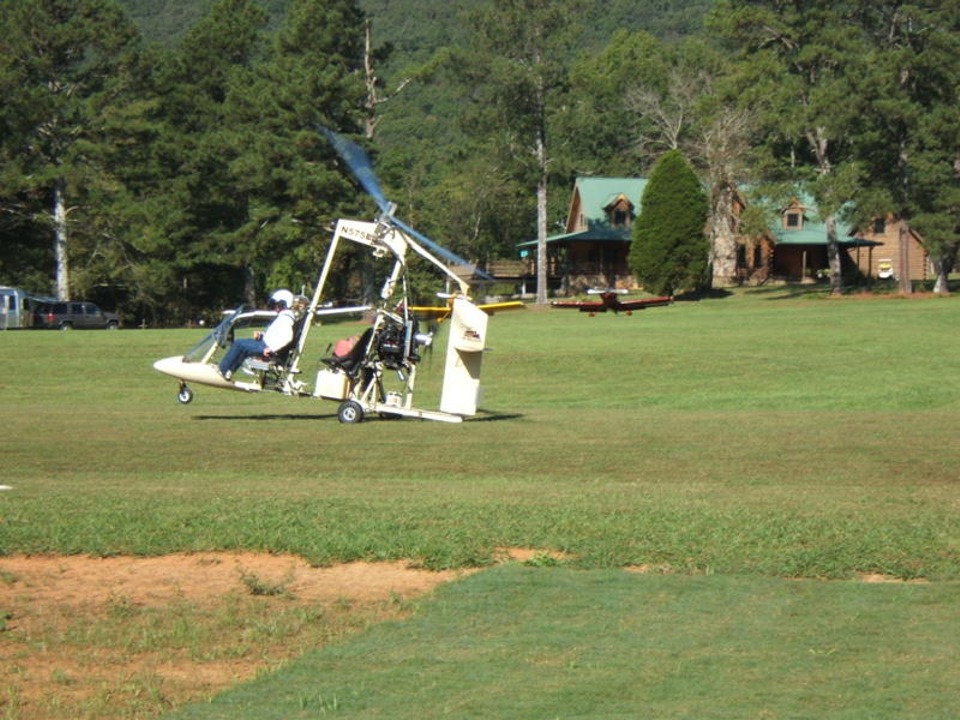 This second autogyro arrived with the one shown above.  This one is a single-seat machine. 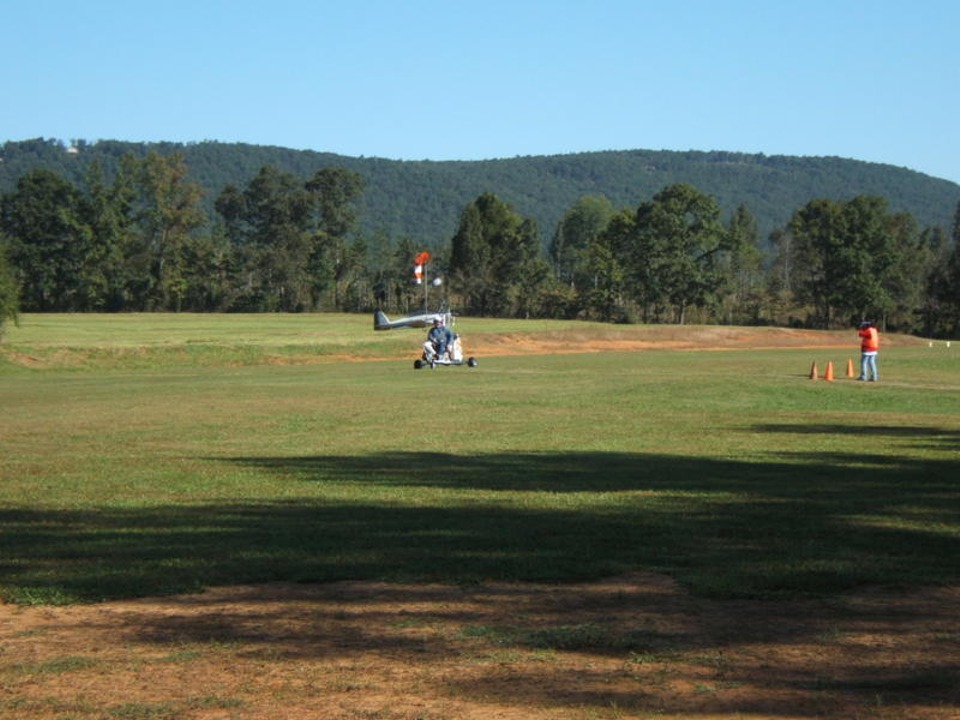 There were three yellow Piper Cubs parked across the other side of the runway by the time lunch was served at 11:30 AM Central Time. 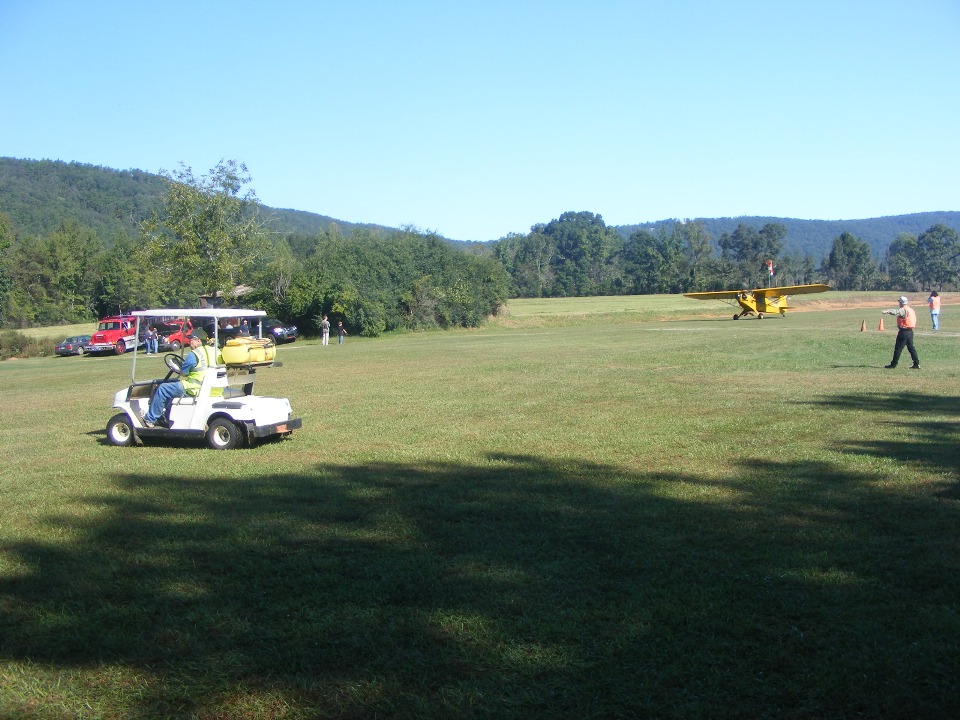 I called David Edgemon in Huntsville, Alabama to see if he was coming today.  He was painting his RV-8 in the paint booth he has behind his garage.