October 27, 2009: As we descended into Colorado, I saw some light dusting of snow over 100 miles southeast of Denver.  By the time we got to the Denver area, there was clear ground down below.  I saw a light twin airplane below departing to the east from Centennial airport.  You can see the clear skies over Kansas in the distance.  You can see I aligned my camera with the engine, not the horizon.  The 757 is slower now, but not yet with the slats and flaps deployed.  The result is a higher angle of attack providing this photo on a tilt with the horizon. 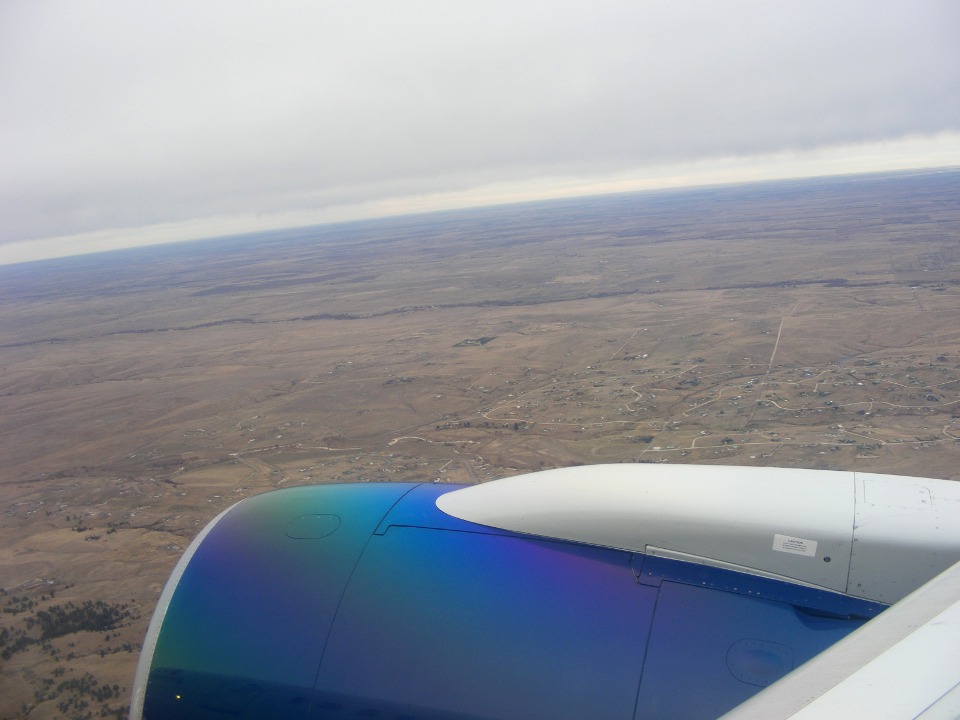 The approach to Denver International Airport is from the south.   Interstate 70 is seen at the bottom right corner of this photo.  That is the little town of Watkins, Colorado where the railroad, US 36, and I-70 come together.   All of them are heading east. 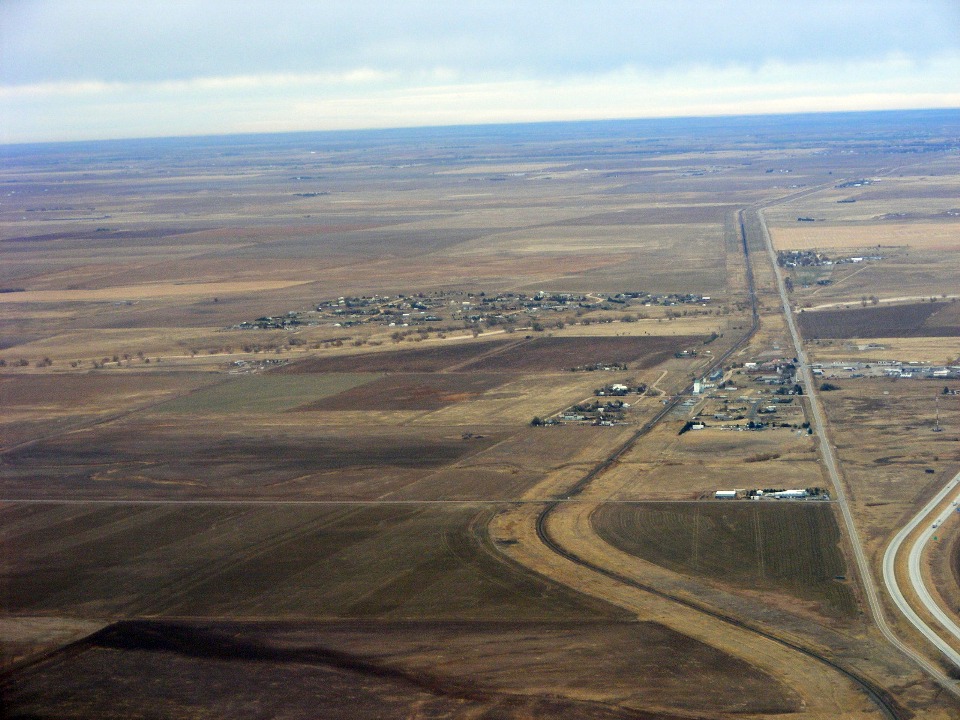 A few seconds later, the Front Range Airport is just off the right side of the airplane, but over five miles away.  This was my destination for my 2006 flight to Denver in my RV-9A. 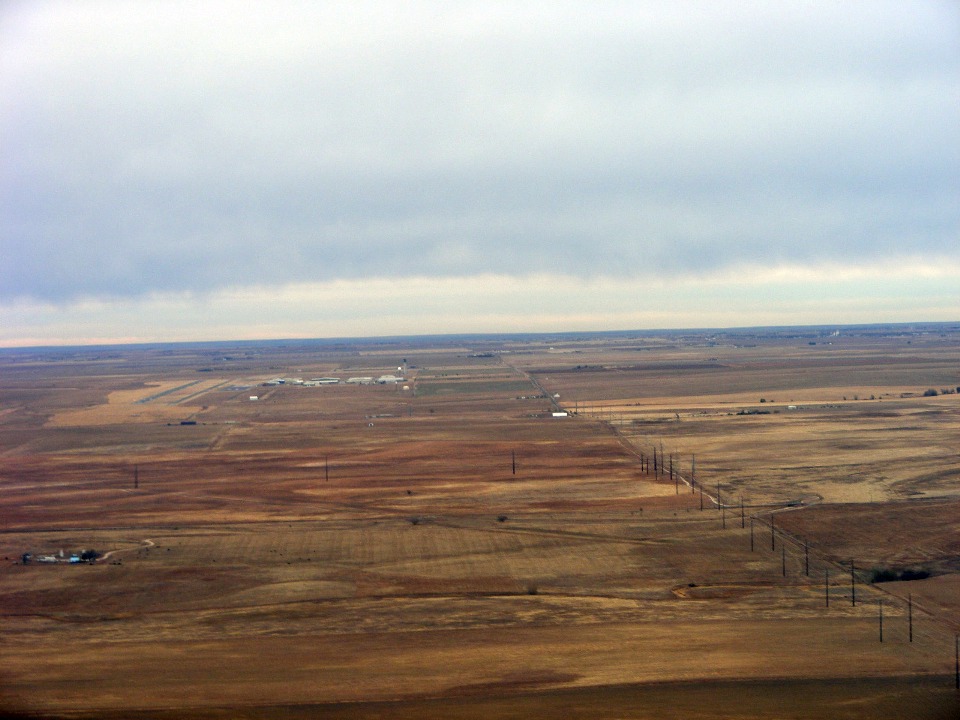 With the two hour time change for me, I was up early Wednesday morning (October 28th) and had some time to publish this web update.  By the way, it is snowing in Denver.  It is good that I learned how to drive in snow at a young age in 1966.   "Drive gently, and use pulse braking" if you don't have anti-lock brakes.   In the 1960's, not many cars had anti-lock brakes.

October 31, 2009: As I write this Saturday morning entry, I am flying Delta Airlines from Denver to Atlanta on another Boeing 757 which has wifi internet service available.  The ground below is still clear in Kansas, while there was still plenty of snow of the ground back in the Denver area.  I should be home by 3 PM if the connection in Atlanta is on time.

I have some pictures taken yesterday in Denver from the last day of my trade show at the convention center.  The internet speed is less than ideal from this airplane, so I will post those photos from home later today or Sunday morning.

As for the snow in Denver this past week, it started Tuesday night after my arrival.  I woke up to about 3 inches of wet snow on the rental car.  It was not difficult to clear it off since the temperature was around 29 to 30 degrees F.  I have not fogotten my snow driving techniques, but it has been about 28 years since I last drove on snow.  That was during a visit to Ohio for Christmas 1981.  The snow that fell on Wednesday night was a light powder and piled up at least six-inches deep on the car.  That snow cleared off more easily than the wet stuff.  By Thursday afternoon the snow was showing signs of letting up.  When I got up on Friday morning, there was just a dusting of snow on the car and the sun was shining for the first time since my arrival back on Tuesday.

According to the moving map on the seat back in front of me, we should be on the ground in Atlanta in about 30 minutes, so I will wrap this up and send it before stowing the laptop bag in the overhead bin.   Later...

November 1, 2009:  Sunday:  Here are the photos I promised while online on the airplane to Atlanta yesterday.

The SCTE Expo is the engineering trade show for the cable television industry.   It moves around the country from year to year.  The popular cities where it has been held are Denver, Orlando, New Orleans, San Antonio, Nashville, and Philadelphia.   Here are a few photos from the show I attended in Denver this week.    This one is the main entrance to the Colorado Convention Center.   Remnants of the recent snow are visible. 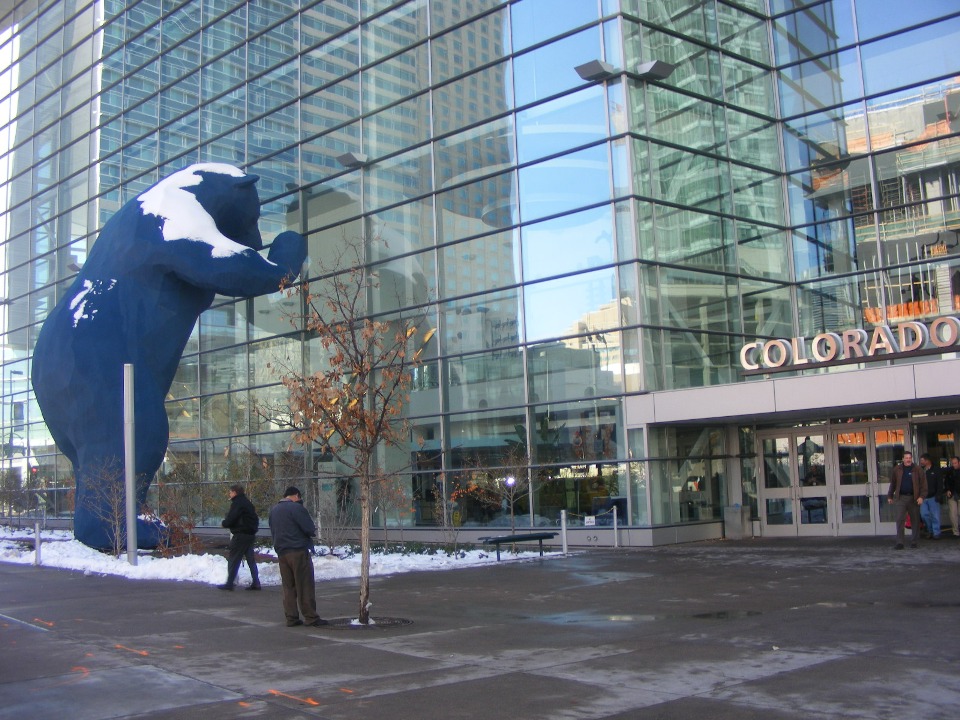 This Hyatt Hotel is just across the street where some convention-related activities were also held. 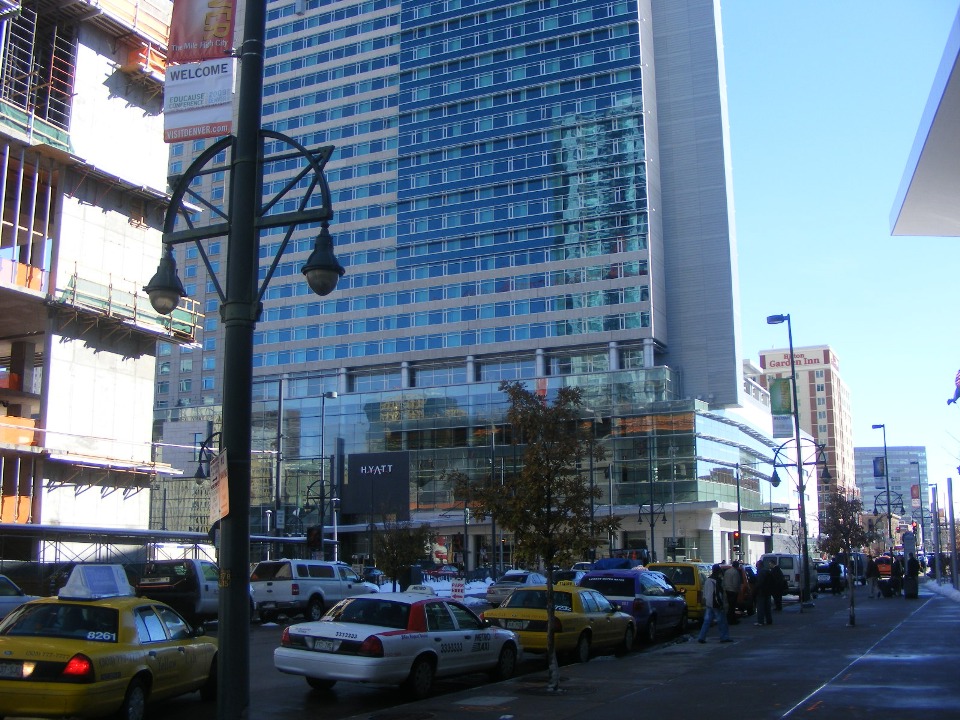 The capitol of Colorado is just a few blocks away on US route 40. 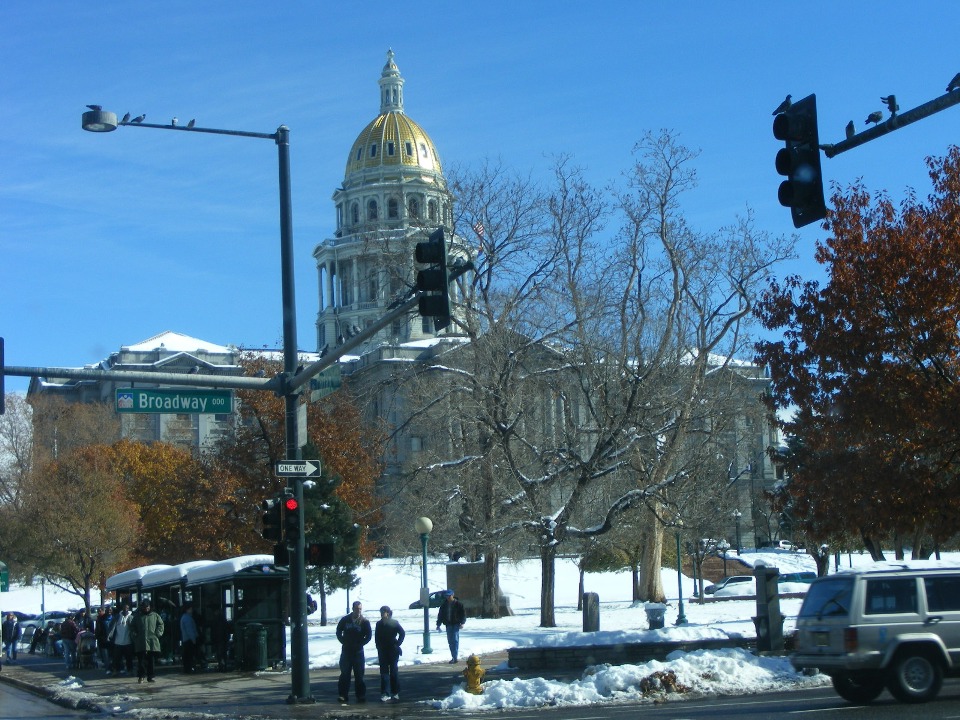 This part of downtown has other classic buildings as seen looking at the church ahead. 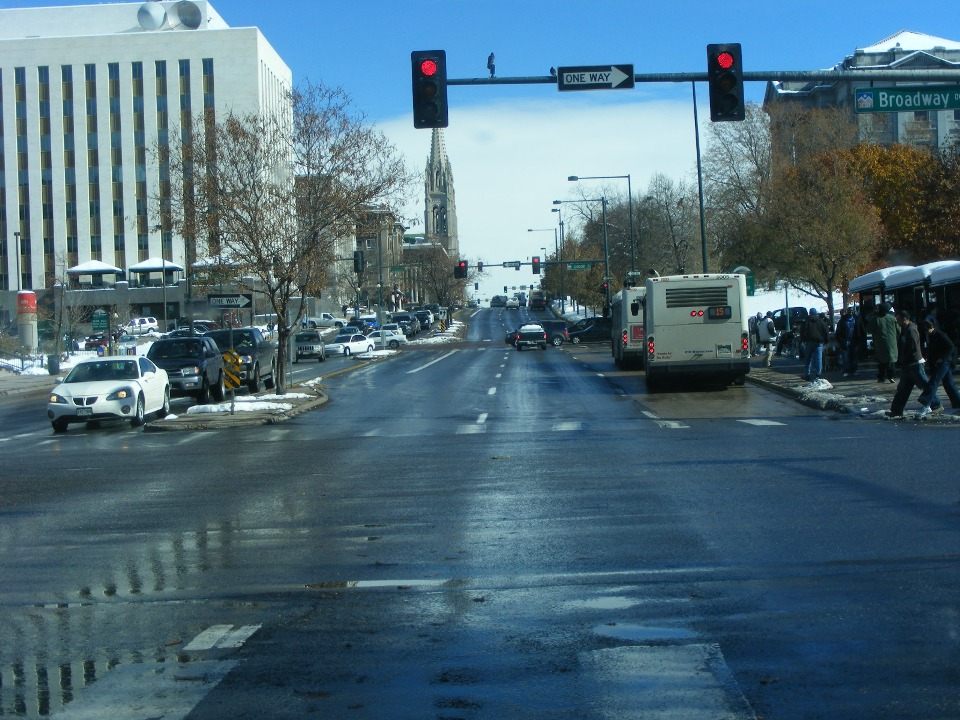 I took this photo in the booth of one of my distributors.  It shows some Olson Technology products in this equipment rack.  The bottom sign is wrong since that last piece is not an Olson chassis. 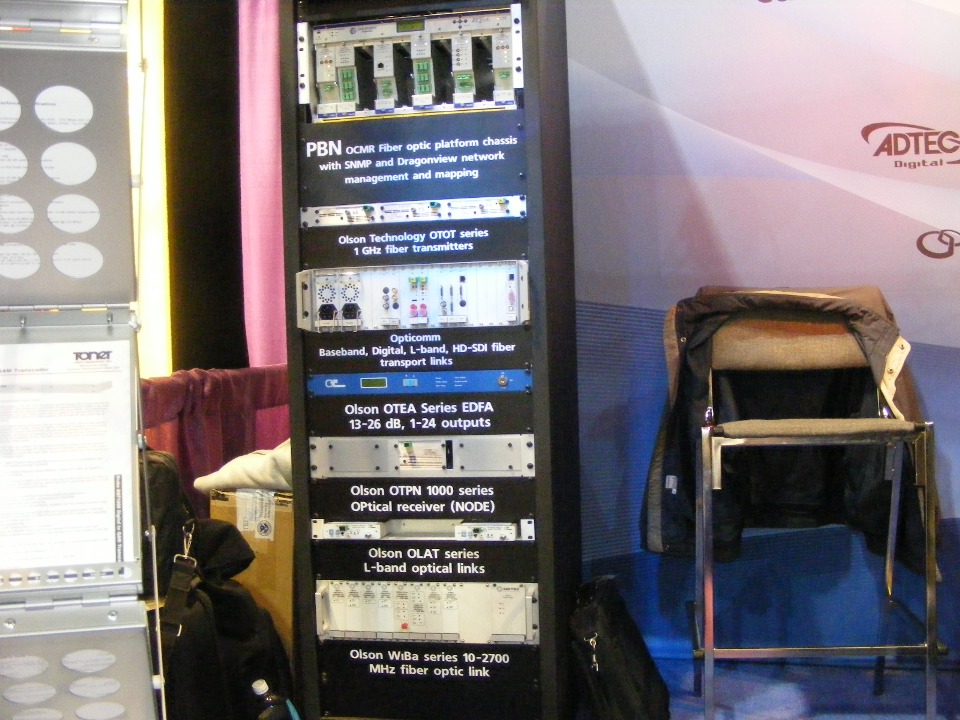 One of the things I like about trade shows, it provides a chance to meet industry friends. 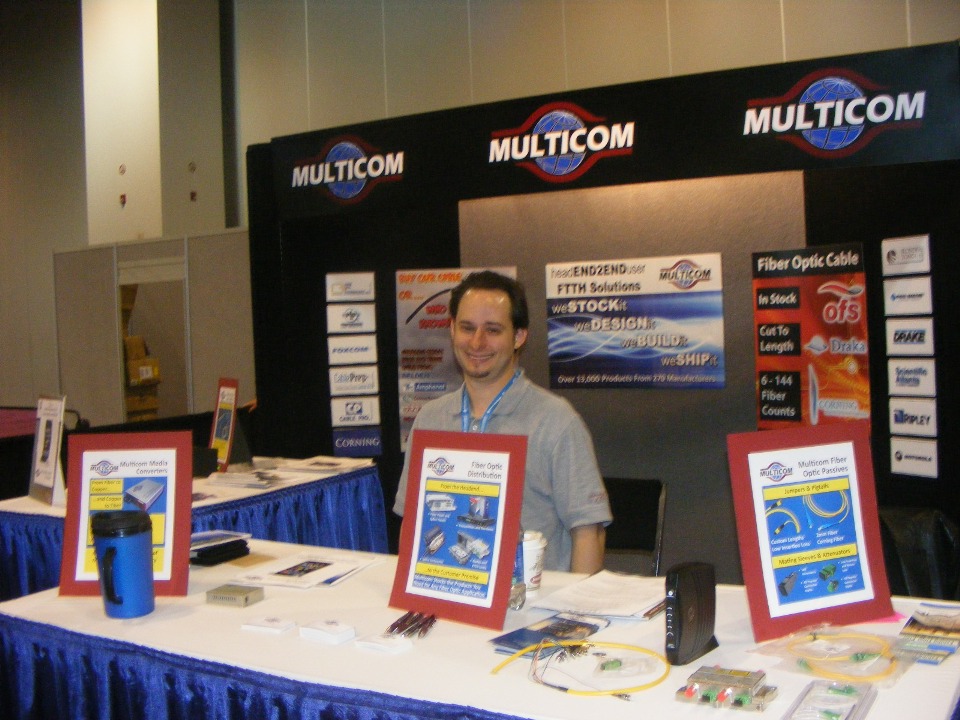