November 17, 2009: And just to stress the family-owned side of the visit today, here is Lynn Goldman and two of his best friends behind the front counter of the office.  Unfortunately the little one would not face the camera.  He is a dead-ringer for the dog in those Cesar dog food commercials. 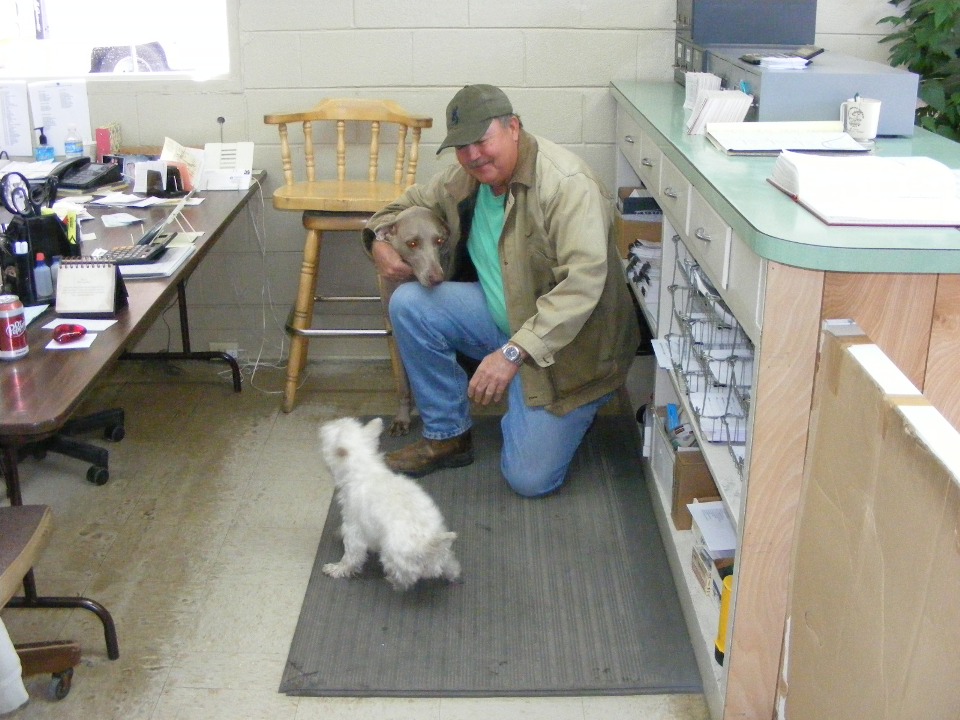 The folks in this town saw Lynn grow up working in the cable system when I first called on his father beginning in 1973.  I tutored him on my various products sold to them over those years.  We were both much younger and thinner in those days.   The various framed art works in the office have changed little in all those years.   Somewhere in my old paper photographs, I have a photo of his dad sitting in a chair by the office front door.  I will have to search for it, scan it, and post it on this page. 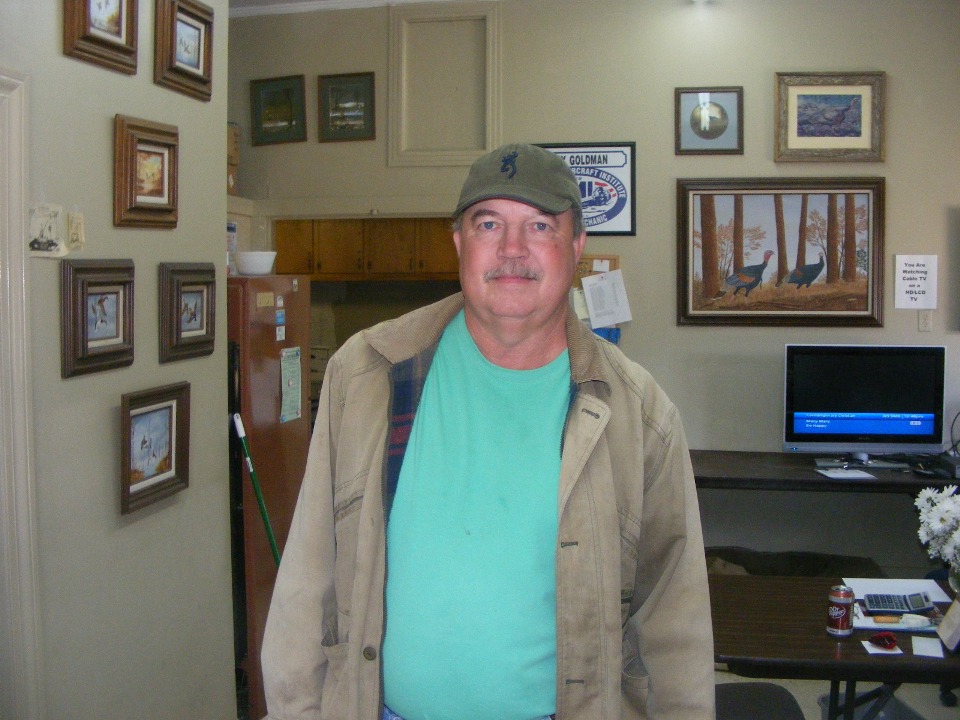 This was on the first of three days of traveling.  I spoke to Lynn a few weeks ago, and today was fulfilling a promise to stop by for short social visit when I pass nearby on the interstate highway.  Later this same day, I met up with another old friend I have known since around 1973 in Hattiesburg, Mississippi.  In 1989, he offered me a job working with Comcast Cable in their West Palm Beach regional office.   During that era, there were only 65 cable systems owned and operated by Comcast.   Nineteen of those were in our southeastern region.

The other stop in this quick tour was to see a friend and former sales engineer who worked with me at my first job with Jerrold Electronics (a.k.a. General Instrument, Motorola).  He is still highly active in cable at age 76.  Of course I am 62, so it does not seem that old anymore.

November 19, 2009:  On the way to my first stop in Demopolis on Tuesday, I saw this old house in Eutaw, Alabama when I got off Interstate 20.  I had more time on the way home on Thursday, and stopped by here to take some photos.  This is how it looked from the state highway heading toward the center of the small town.  Yes, that is part of rail fence in the foreground by the roadway. 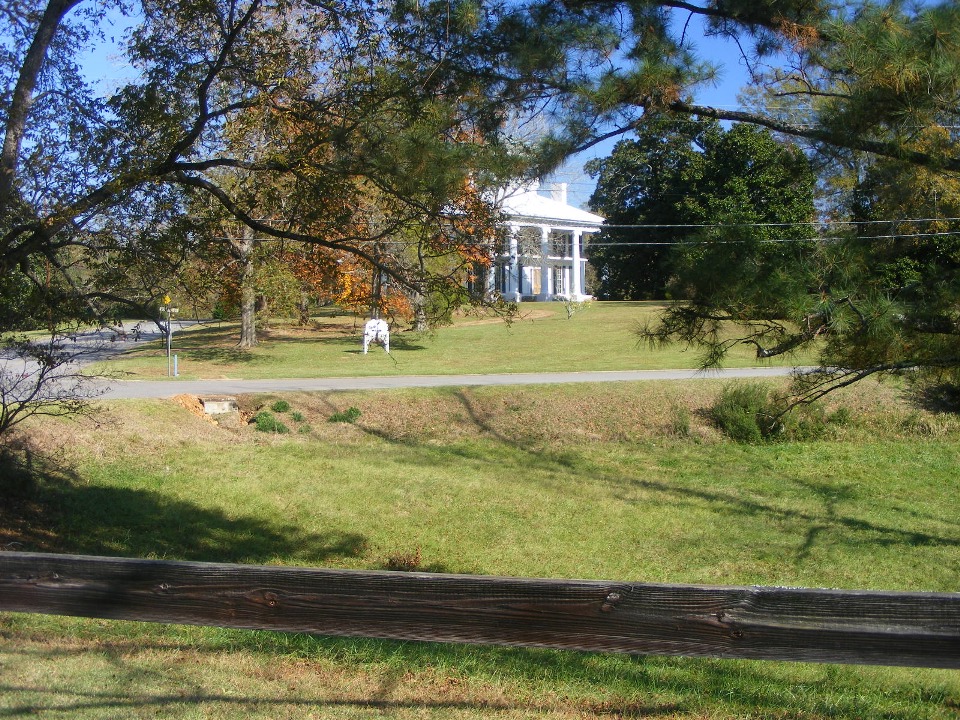 This sign tells the story of "This Old House" for all who are interested.  I half-way expected to see a guy like Bob Vila renovating the place.   The part of the sign that is covered says "Tours Daily". 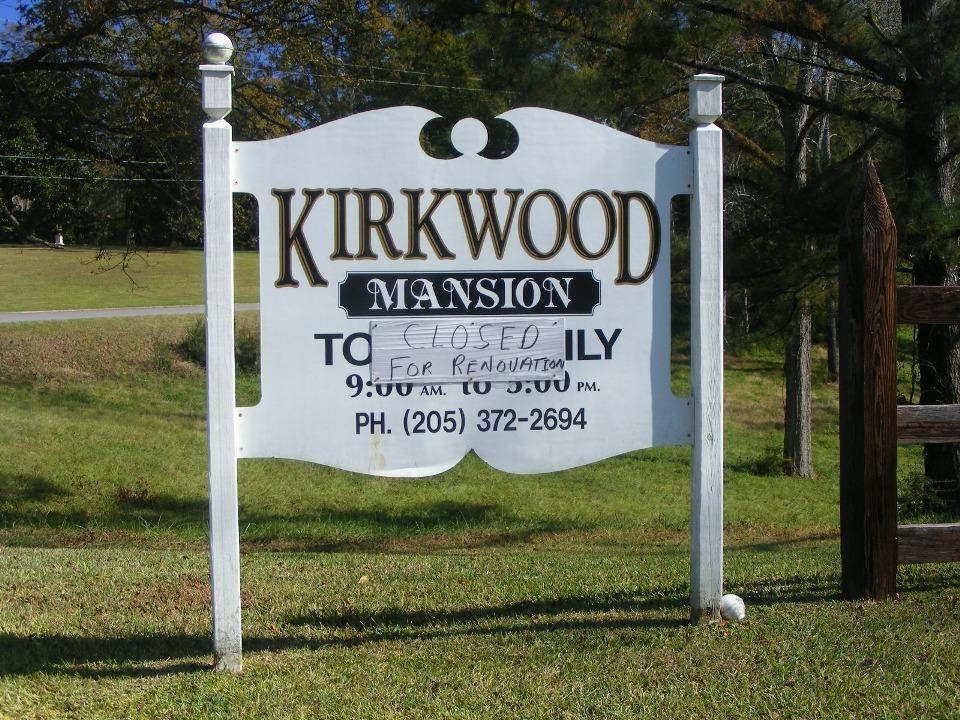 Here is a better view from the street you see in the background in the two photos above.  The roof is new.  The trees on the right are magnolias. 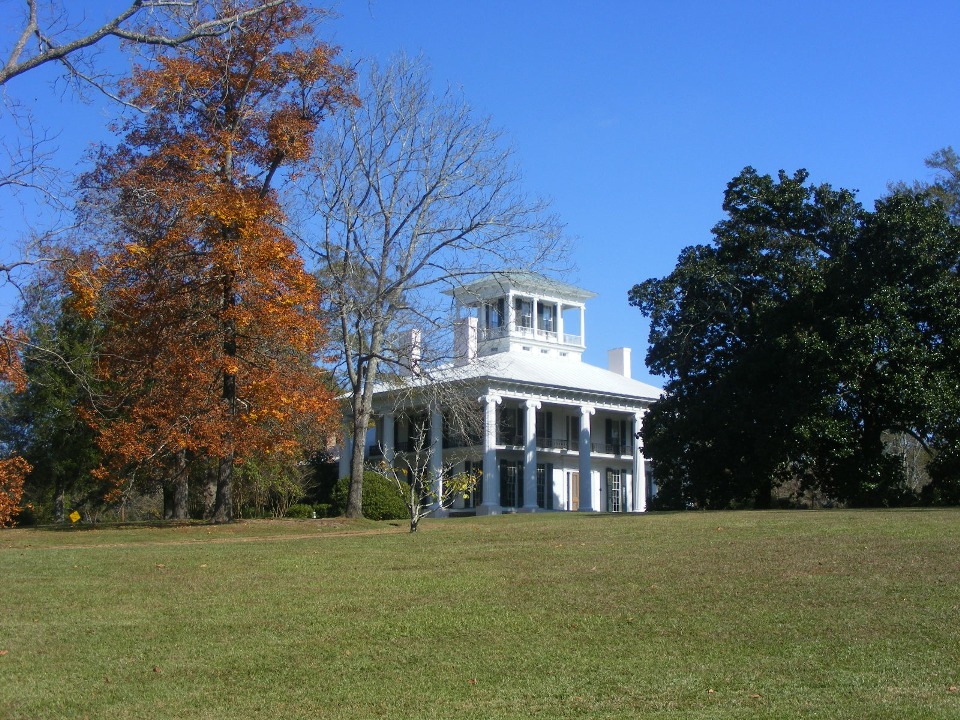 Here is a closer view courtesy of the zoom lens.  I did not process these photos in any way except to change the size to fit this page.  The brilliant colors are a result of using a polarizing filter on the lens of my digital camera.  Look carefully and you will see the drive that circles around by the west side of the house between the small tree and the two larger trees on the left side of the photo. 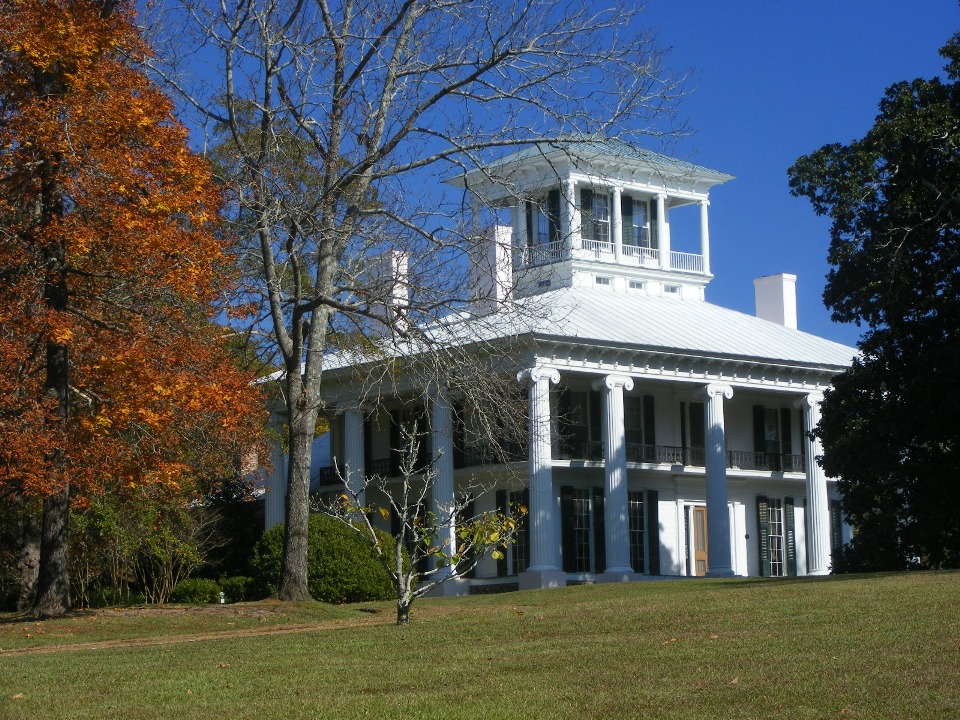 This sign tells the age of this wonderful old mansion.  The driveway is more visible in this photo.  This area was relatively un-touched by civil war battles from 1861 to 1865.  The house is on the national register of historic places.   You will find a number of web articles about it. 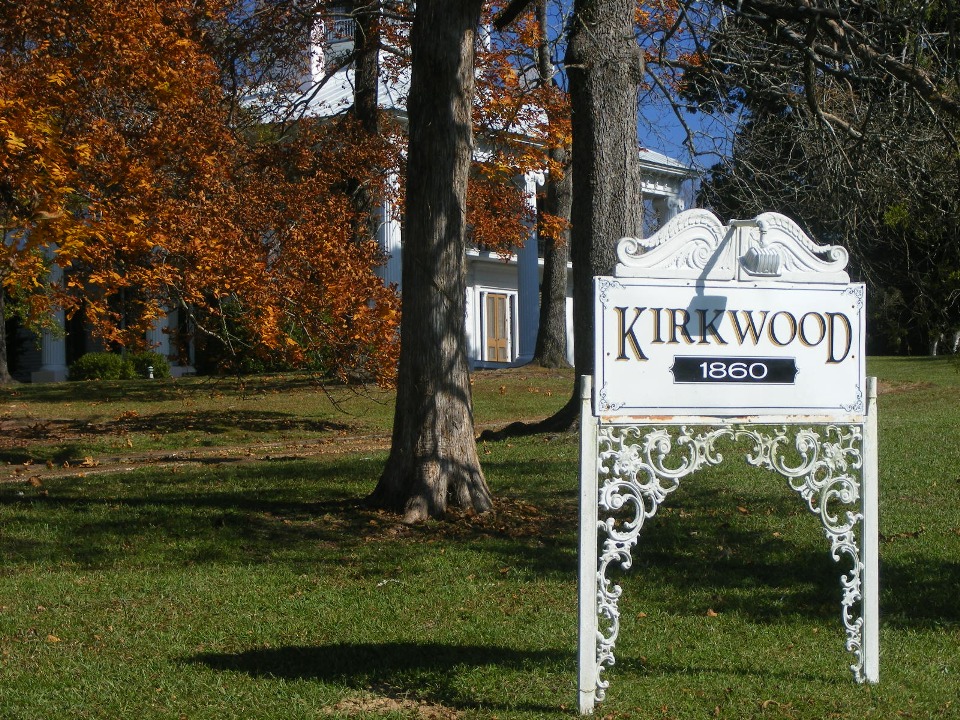 The old carriage house is near the back of the main house. 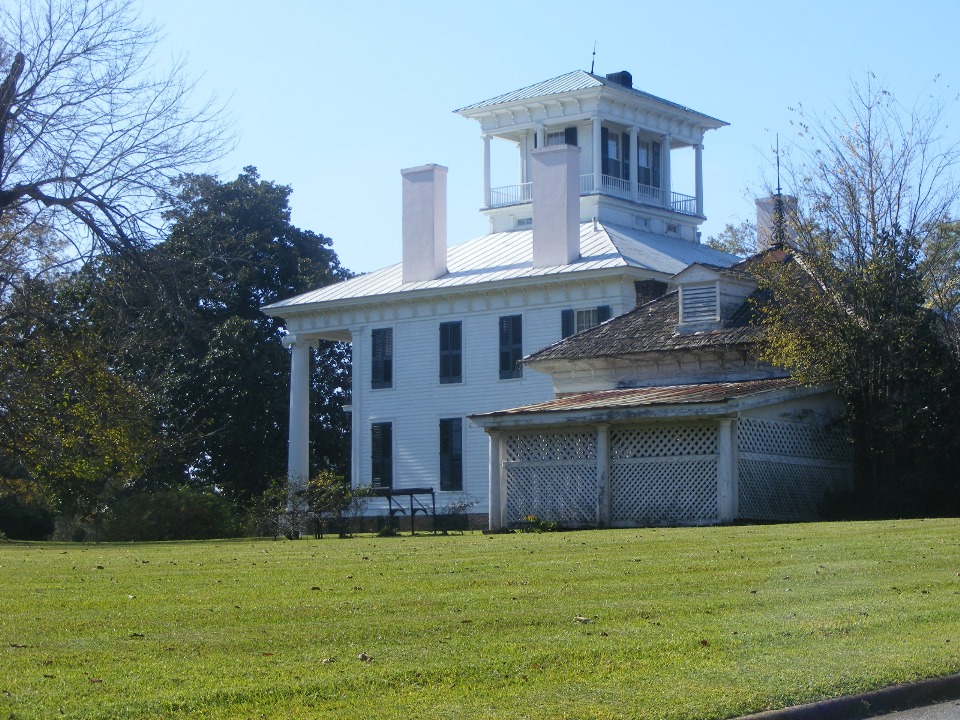 This view from the west side of the home shows how the landscaping hides the old kitchen on the back of the house at the left of the photo below. 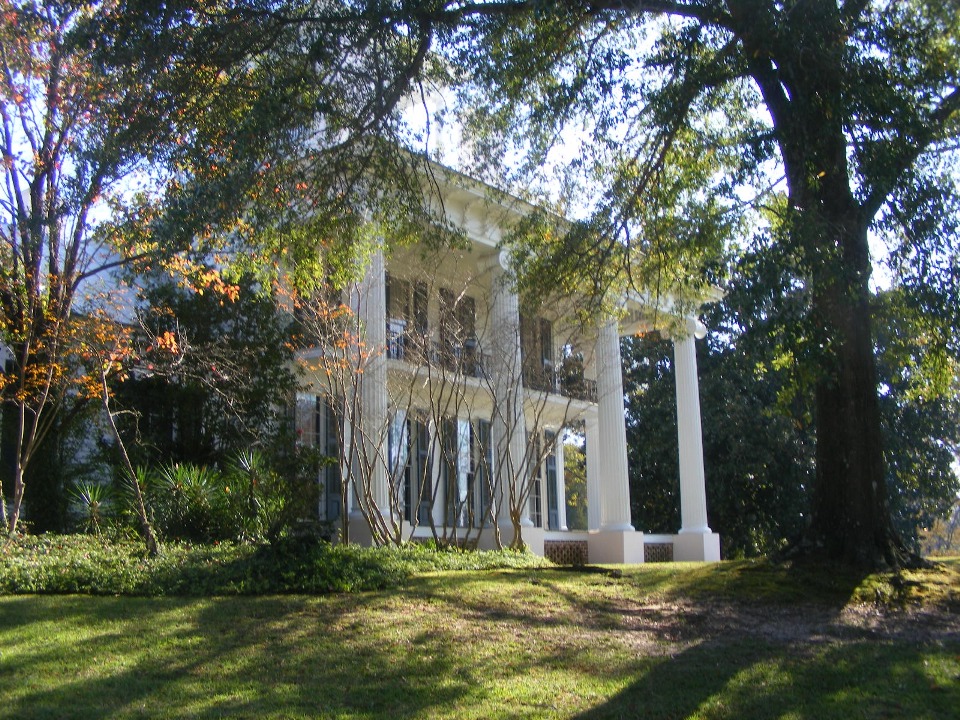 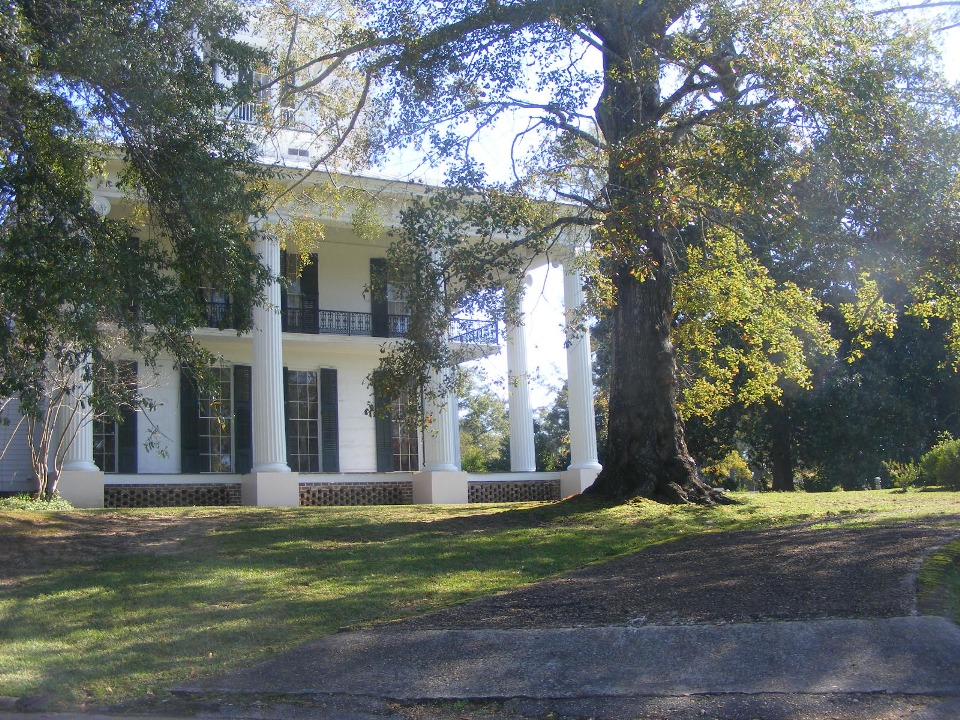