February 21, 2010: The engine baffles were bolted back into their proper position after getting the serial numbers of cylinders 2 & 3.   I also checked for a small oil leak which turned out to be the screws on the bottom of the engine-driven fuel pump.  I did a little work with the torque wrench and that problem should not bother me for a while. 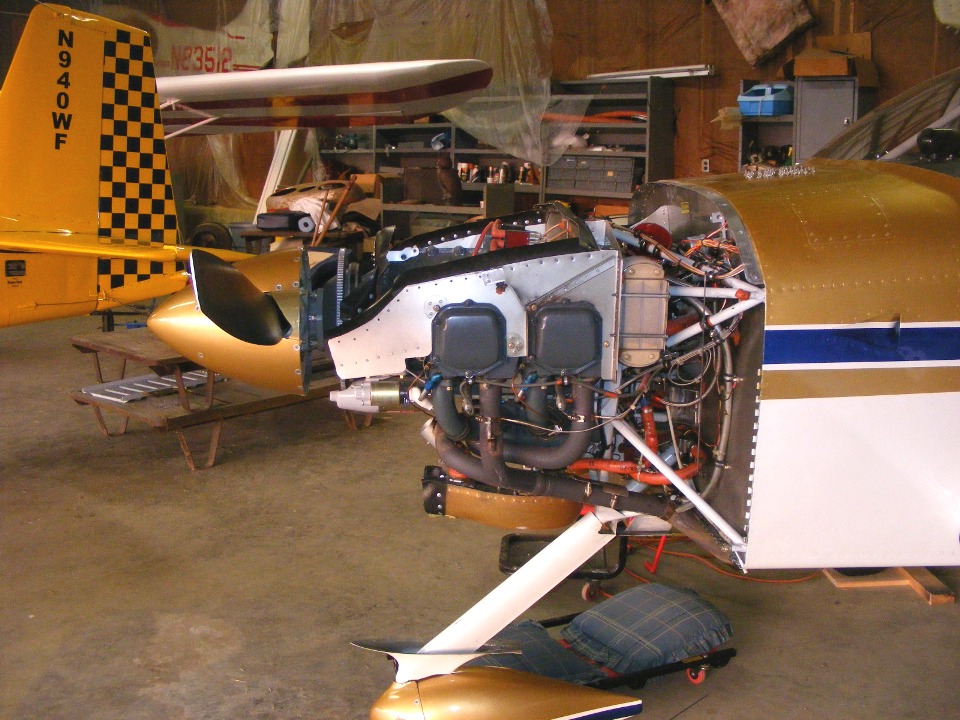 I will clean the inside of my lower cowl on the next visit to the hangar.   The compression test will be conducted after verifying the other two cylinder serial numbers.  The cowl will go back on and a flight to go put gas in the tanks will follow, weather permitting.  As the sun set in the west, I closed the hangar door and turned off the lights.  This is the view looking west from Sunday evening.   One lonely jet contrail is reflecting the sunlight. 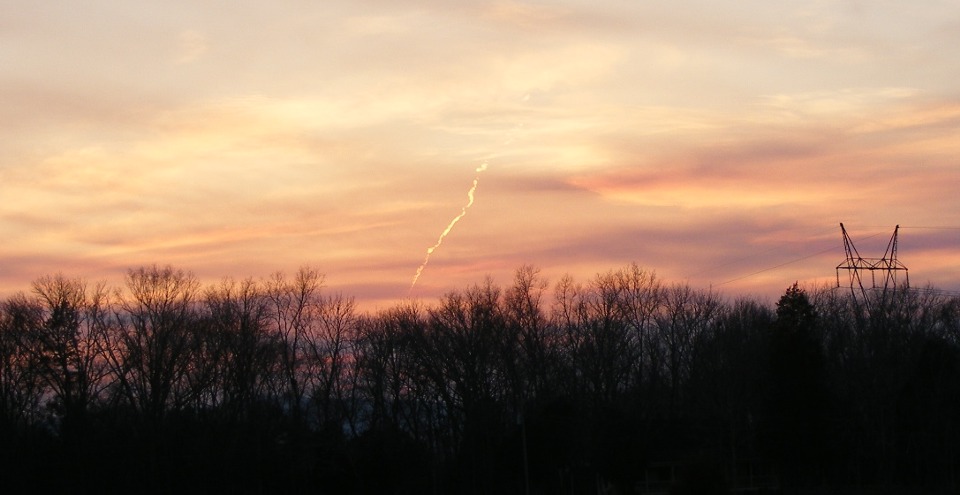 The view looking south shows the solid overcast that did not make it up to our area.  Higher levels of cumulus clouds are still in the sunlight. 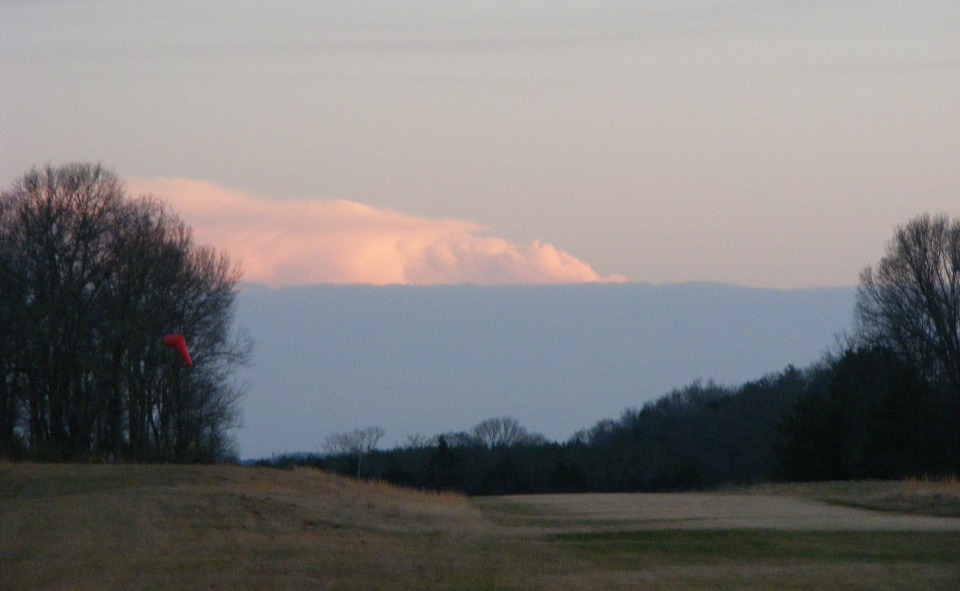 March 7, 2010:  Sunday again and time for an update.  What can I say, the best days for flying were when I had my airplane down for minor maintenance, or it was a work day, not the weekend.   Yesterday morning is was very cold.  I worked on the computer for a while, but not on this web site.  I have been having trouble with the server uploads and was told it was because I was using Front Page 98.  I found an upgrade copy of Front Page 2000 that was supposed to solve my problems, but that is not quite solved, yet!

After lunch when the temperatures came up to something tolerable, I headed over to the airport and put the cowling back on my airplane, getting it ready for flight.   Wendell's RV-8 still sits in the front of the hangar as seen by its tail in front of my airplane in the photo at the top of this page.  His airplane will be out of service for a while with annual inspection and the ECI Titan cylinder recall.  As a result, we have agreed to move his airplane back into the corner and bring mine to the front.  When I got up this Sunday morning, the weather outside was completely overcast and still cold.  As a result, I did not go back to the airport early today, or at all since I did not expect to fly.  By the time it got to be 3 PM, the skies were clearing and plenty of blue had replaced the overcast to the north of Chattanooga.

With not much day left, and no one to help move the airplanes in the hangar, I decided it would be an afternoon better spent just enjoying the fresh air and belated sunshine.  I went by the national cemetery in Chattanooga and visited the Bragg reservation on Missionary Ridge, which is part of the National Park System.  This was all about research on another of my projects, a book about traveling on US 41 and the sites to be seen along its entire length from Lake Superior to Miami.  Here is the photo I took today near an intersection where the traveler can choose the present route of US 41 or the original route before the Bachman Tunnels were built through Missionary Ridge.  This is the view of Main Street approaching Dodds Avenue, the present day route of US 41 and US 76 leaving Chattanooga.  Just one block past the intersection where the road comes down to only two lanes, the right turn there is the Old Ringgold Road, which was the original route of US 41 over Missionary Ridge. 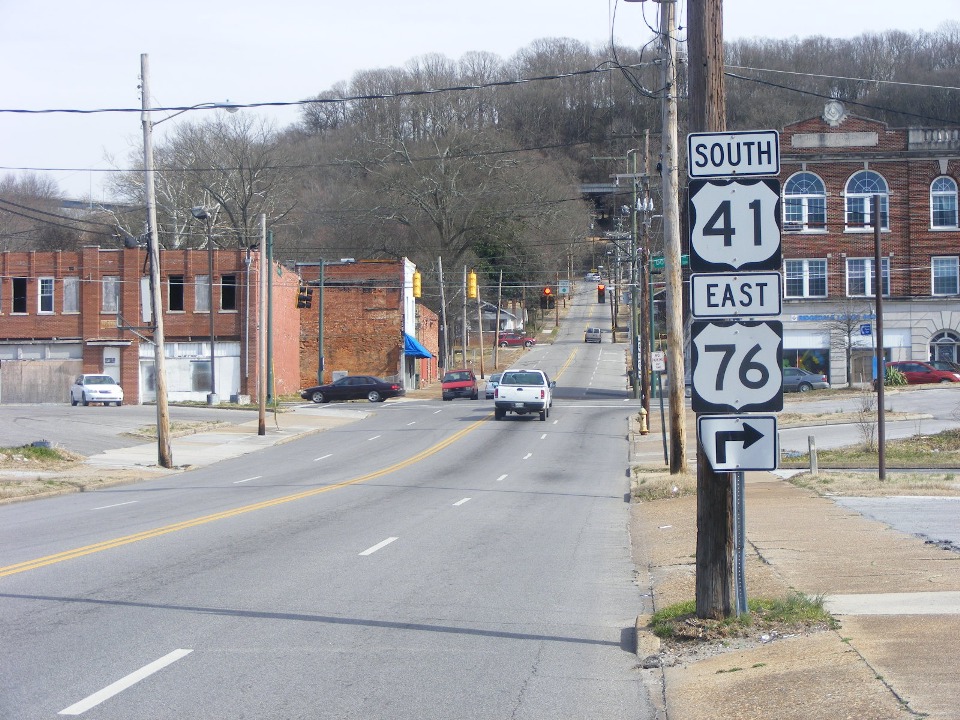 This National Park location is at the top of Missionary Ridge, near the "ridge cut" where Interstate 24 was built in the 1960s.  Early this morning, the day did not look as if it would turn out this way.  Many of these classic monuments were erected around 1900-1902.  There are a number of these at Point Park on Lookout Mountain, Chickamauga Battlefield Park, at the south end of Missionary Ridge, and here at the Braxton Bragg HQ site. 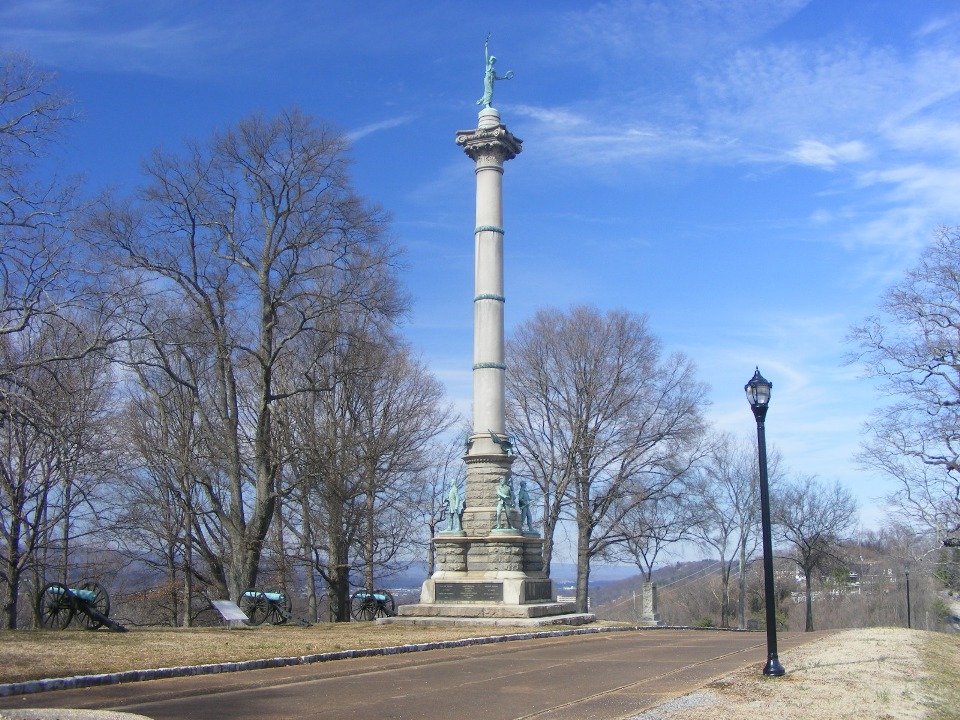 For now, I am still using Front Page 98 to edit these files, but having to publish by hand until I can find the secret to getting my internet server to accept my files directly from Front Page 98 or 2000.  The weather forecast for next weekend is not looking good for any flying.  We shall see...

March 16, 2010:  I am putting up an early morning post before work hours begin.  This is the last official week of winter as spring approaches.  It was a weekend with thunder and rain on Saturday, then cold and cloudy on Sunday.  I worked on my computer to get it ready for an operating system upgrade.  I have a Western Digital USB external drive that is just not working out.   I ended up wasting too much time with it and got frustrated in the house instead of out doing my weekly shopping chores interacting with humans.  Then to add insult to "injury", the automatic update from AVG antivirus on Monday rendered both email and web browsing virtually inoperative.  I used my old desktop computer to do some research of the symptoms I was having.  In the end, I finally took off the antivirus and everything snapped back to normal.  I put back an older version of AVG late last night and got a good night's sleep knowing business is back to normal.

The forecast for next weekend may offer up a day for flying.  "Since when can weathermen predict the weather" is a line from Marty McFly from the movie "Back to the Future."  It has been the motto for the past couple of weeks, and with the changes of spring weather now upon us, it really applies.  The weather system that brought the thunderstorms on Saturday moved up the east coast and was blowing all the way to the midwest on Sunday.  Here in Chattanooga, we got the back side north winds from that system, keeping us overcast and dreary.