March 20, 2010: This first day of Spring 2010 continues with a flight across north and central Georgia around the Atlanta Class B airspace and down to the Macon, Georgia area.  This aerial view shows a major intersection on Interstate Highway 75 looking toward the south.  The green line shows the path of the old two-lane US 41 highway that handled a lot of traffic before the super highway and bypass were built. 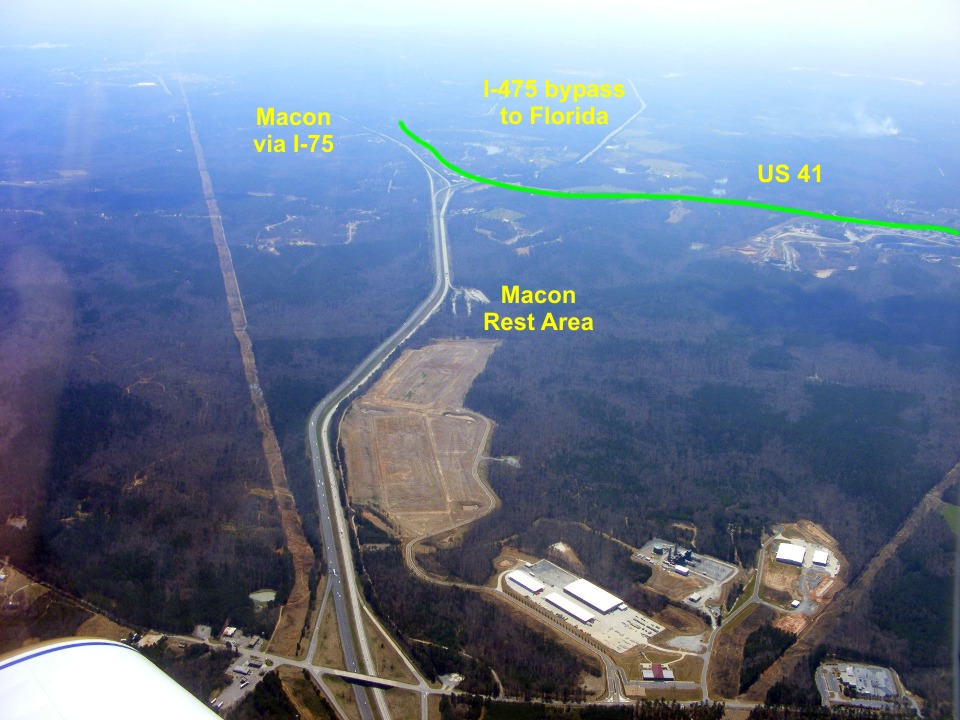 Marty asked about where we could land to go to a good barbecue restaurant.   I looked at the GPS and nearby airports and thought about Perry, Georgia south of Macon on I-75.  The exit there for US 341 has a number of restaurants and motels.   The question was whether or not the airport had a courtesy car available.  The photo of the FBO from the ramp tells the story.  A few minutes later, we were in the Chevy mini-van and heading for the big interchange at US 341 and I-75.  The van was nearly out of gas, so we made a $10 donation in fuel since we did not buy any AVGAS.   I want to thank Brice Ransom for his hospitality at KPXE again here on this page! 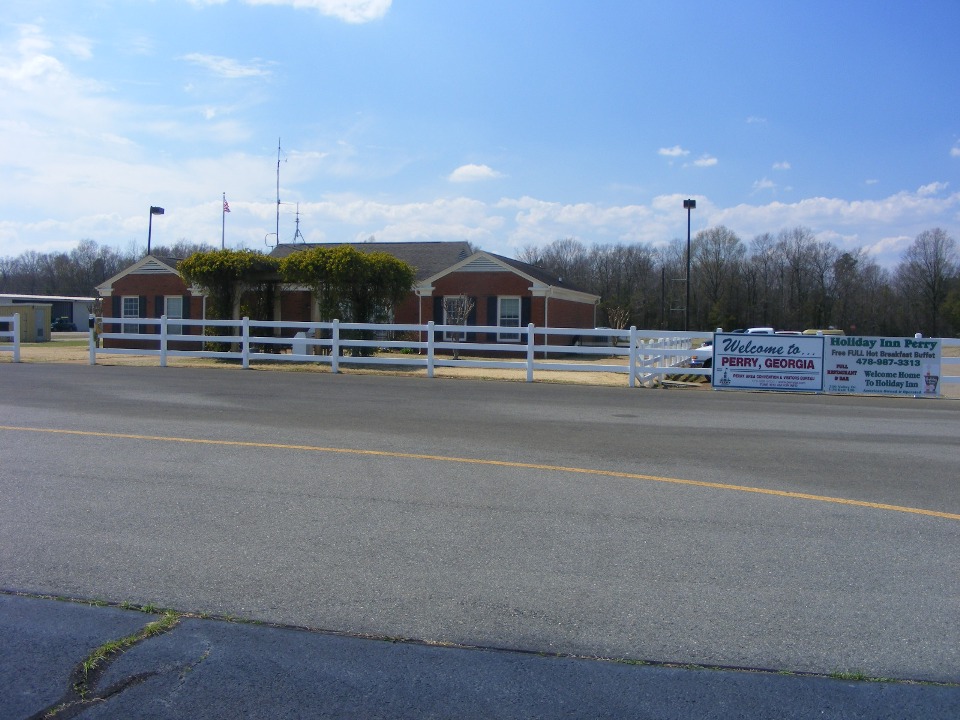 We ended up at Sonny's Barbecue, part of a chain of restaurants I found in Florida years ago.  Marty got his barbecue lunch.  I had the salad bar with chicken salad and seafood salad for the protein with the usual lettuce, cucumber, etc.   After that bit of refreshment, we returned the van to Brice at the FBO.  Marty introduced him to my web site while I got ready for departure.  I met another pilot as I walked out to the ramp.  He asked about my RV-9A and I invited him over to look at the airplane before Marty climbed in.  After he left, I took my camera and headed toward the FBO to take the photo you see above.  When I was doing that, another pilot was walking toward the FBO from his airplane and asked about my airplane.  The scene was repeat of what happened just a few minutes earlier.  I showed him the Dynon D-10A and how it worked as I got into the airplane and got strapped in for departure. 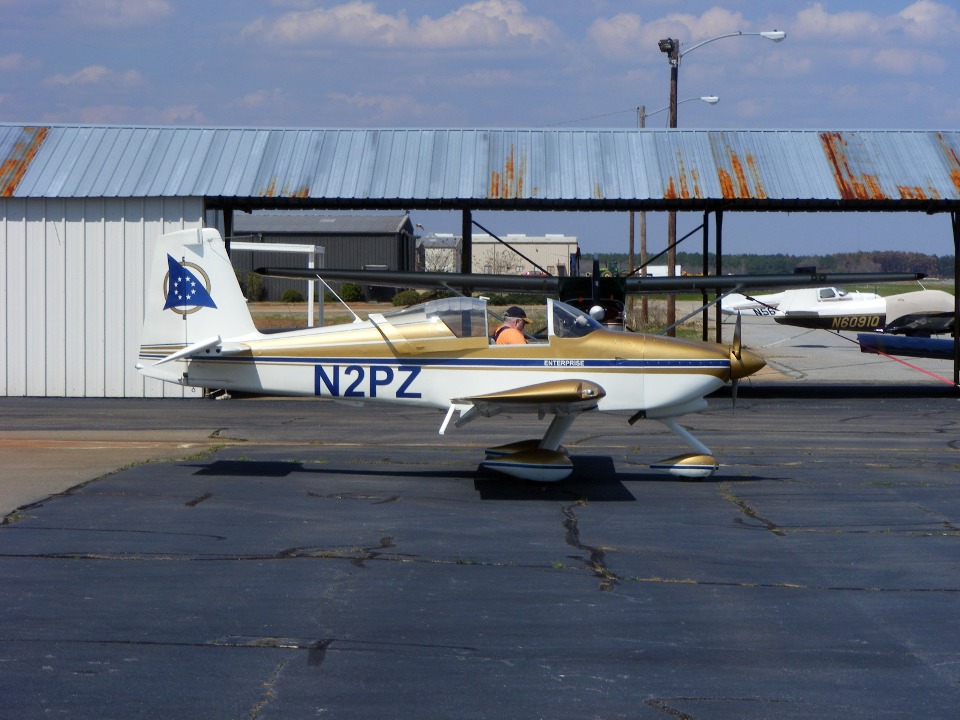 The taxiway was being rebuilt along much of the runway here at Perry.   There was an alternate route in front of some of the hangars up past mid-field where we executed a takeoff toward the south.  As I climbed out from the runway above pecan groves, US 341 was easy to follow to the west toward Fort Valley and north toward Roberta, Barnesville, and Griffin, Georgia.  I gave Marty a guided tour from the air as we flew past the Blue Bird School Bus factory at Fort Valley.  I had Marty fly the airplane north from Fort Valley to allow me to take some aerial photos.  This is also the land of peach orchards alongside the pecan groves.  I had a couple of aerial photos I wanted to take of places I had seen from the ground.  The photo below shows the old US 341/Georgia Route 7 on the right going through the village of Musella.   The present version of the highway built around 1950 is on the left.   There is a white water tower near the point where the highways come together.   This is an alternate route to the heavy traffic on I-75 and stays well clear of Macon.  This is the route my father and I would take going to Florida in the 1950's and 1960's.  I had my first "over-the-road" driving experience from Fort Valley to McRae, Georgia when I was 15 and had my learner's permit.  I came down this road on Father's Day a few years ago remembering those days when I was a teen and went to Daytona and the NASCAR races with my dad. 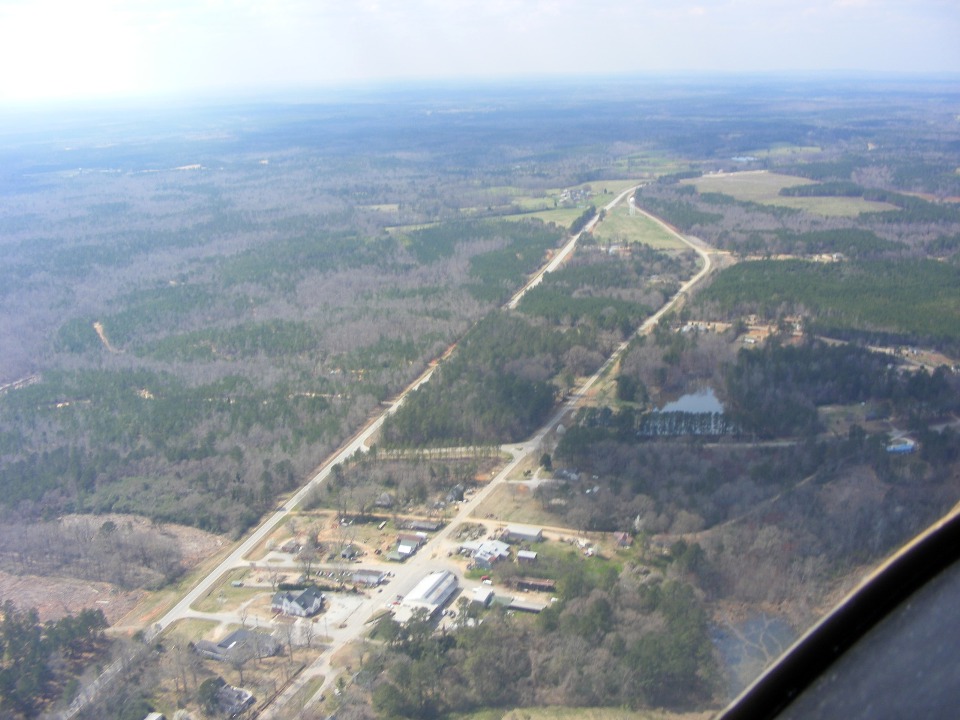 Just north of the water tower is this farm which has an unusual mail box across the highway from his driveway.  It does not show in this photo, but I did see it from the air when I took the controls and made a closer pass while staying 1000 feet AGL not to scare the cows down there.  I made a turn for a second pass to let Marty see what I saw on the first pass. 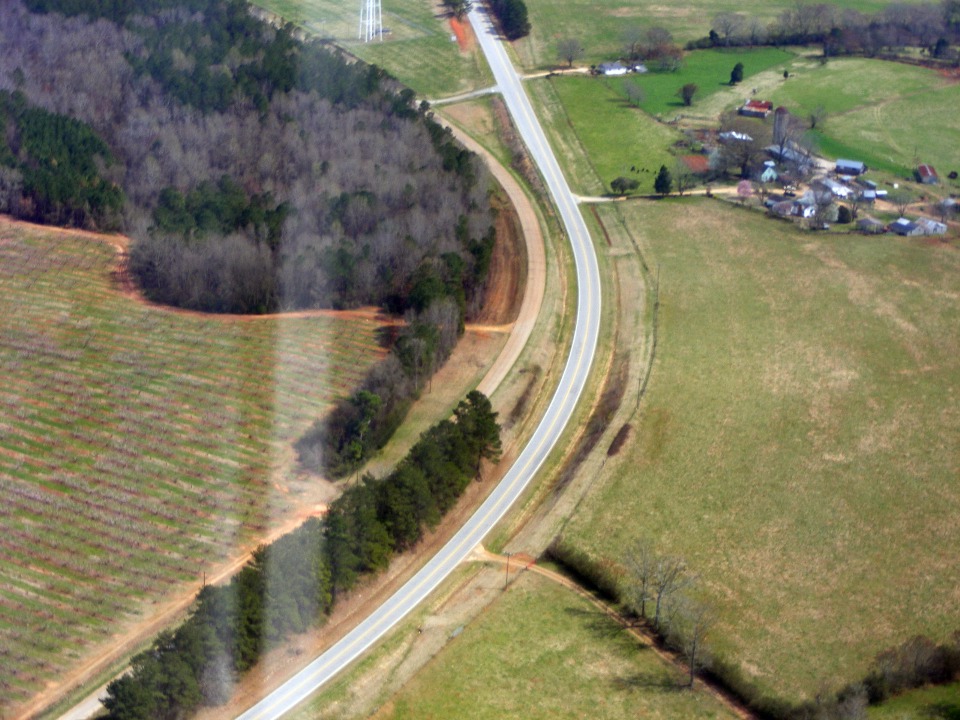 This is that same mail box seen close up from the side of the highway when I passed by here July 4th, 2004.  As you can see below, on that day, the "farmer" was dressed as "Uncle Sam".  When we flew over this location today, I could see he was dressed in blue "overalls" like many farmers wear on a typical work day.  The old US 341 is in the background and today's version of US 341 is where I am standing to make this photo. 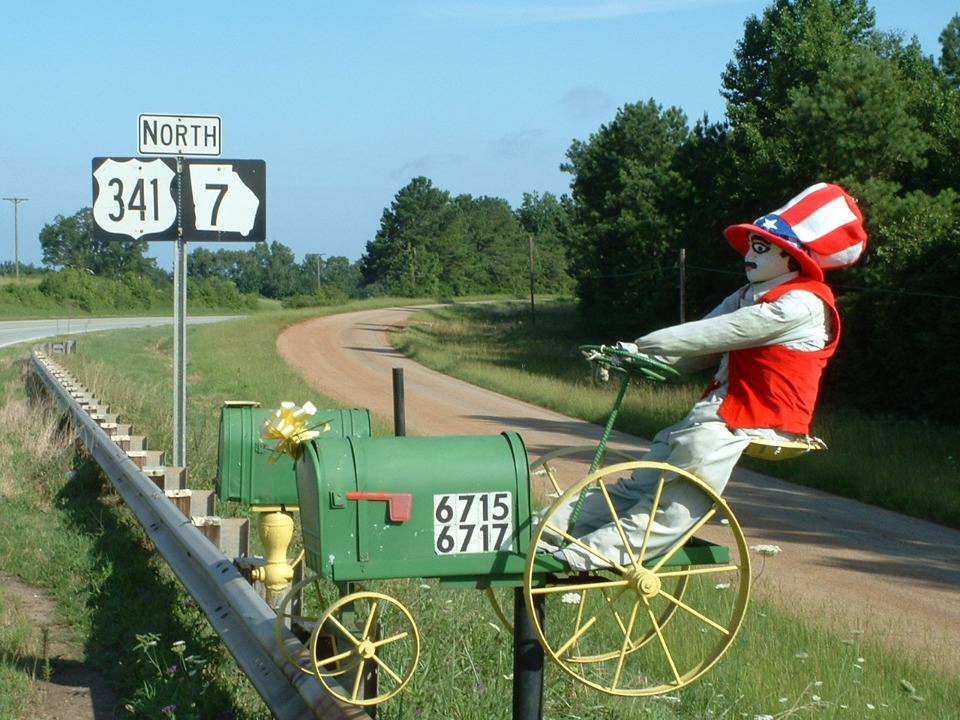 Here is the GPS flight path where I flew past the location of the mail box seen above. 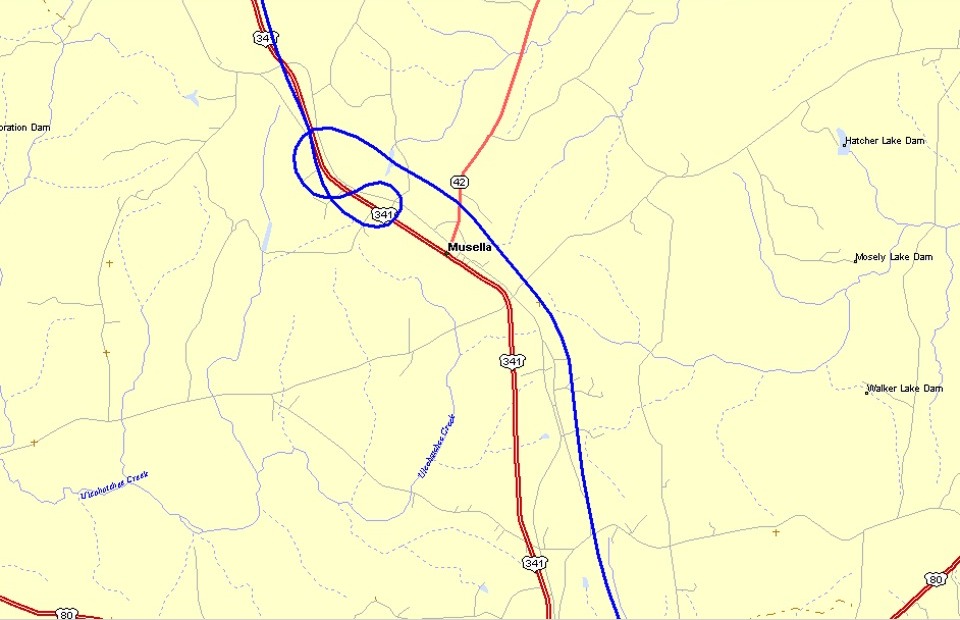 I traveled to Florida last month and found this new traffic circle at the junction of US 341 and Georgia route 74 just north of Culloden, Georgia.  This was a four-way stop intersection up until it was recently converted to what you see below.   The view is looking west with US 341 going from one side of the photo to the other. 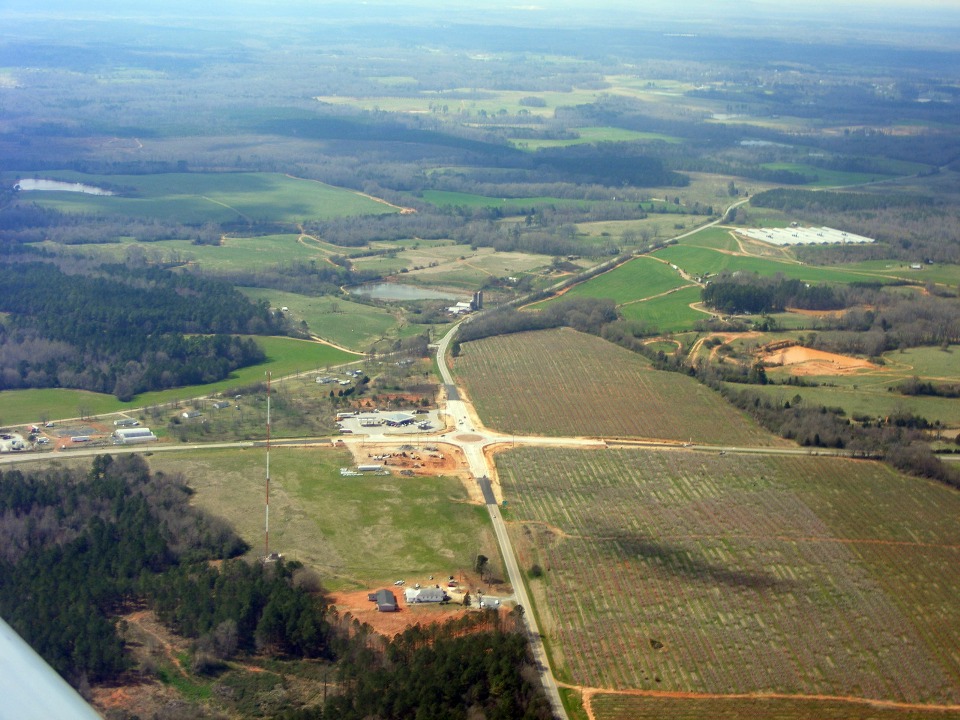 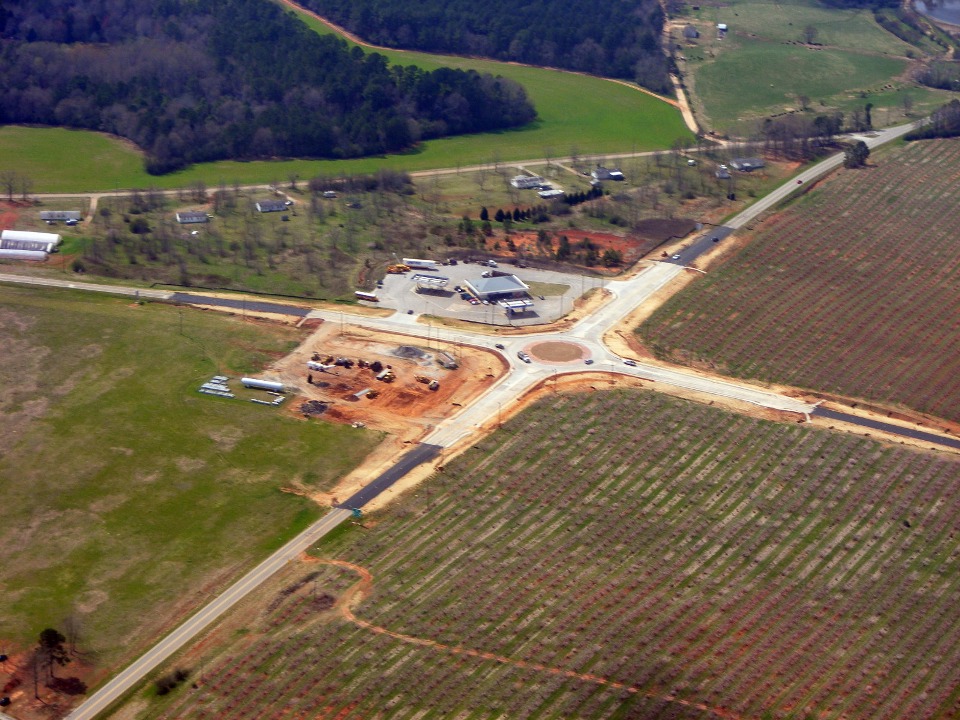