December 10, 2012: This week takes me to the DFW Airport to install fiber optic equipment for my day job.  I worked several days with a contractor on the satellite and CATV fiber optic links that will support all television services in American Airlines Terminal A.  Some of the fiber components I am installing will eventually support all the airline terminals.  These four modules near the center of this chassis transmit satellite signals from the admin building to a building at the center of the airport terminals. 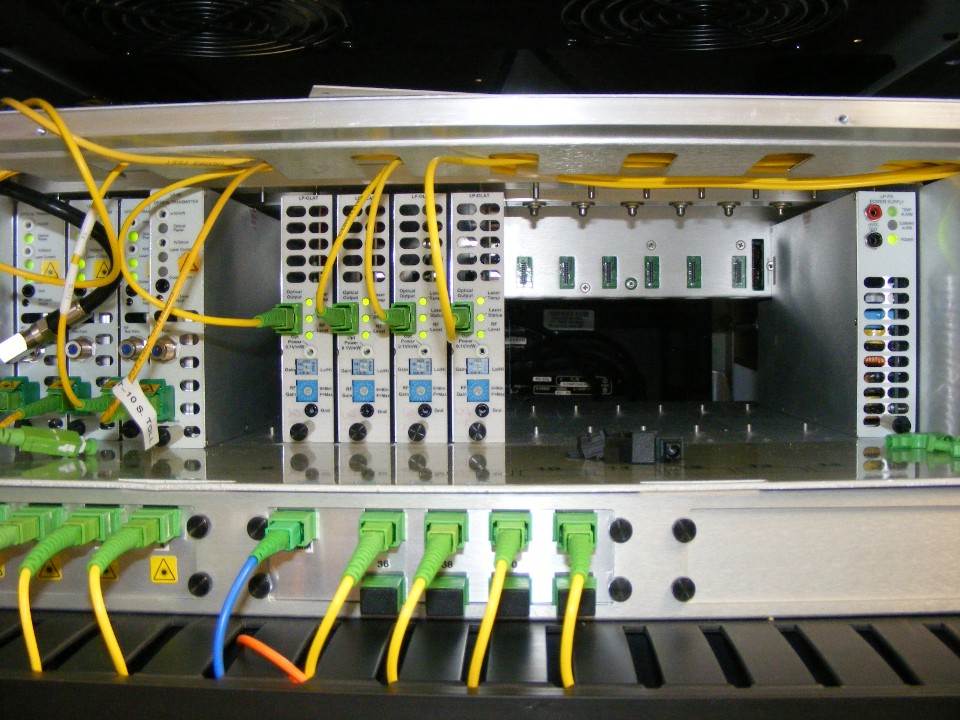 Most of this equipment at the central utility plaza (CUP) was installed in 2009 to distribute CATV signals via single-mode fiber.  The two unpowered modules near the center of the chassis below will expand the CATV service to new locations.  The two units at the bottom of the photo below will send the satellite signals from the photo above to all the airline terminals as the fiber links are built.  For now, the only links from the 12-port optical splitter near the bottom of this photo will go to Terminal A where re-construction is moving forward.  All 12 ports could be in use in few years as all the terminals get the upgraded satellite fiber optic technology.  The device at the bottom of this photo is an erbium-doped fiber amplifier (EDFA). 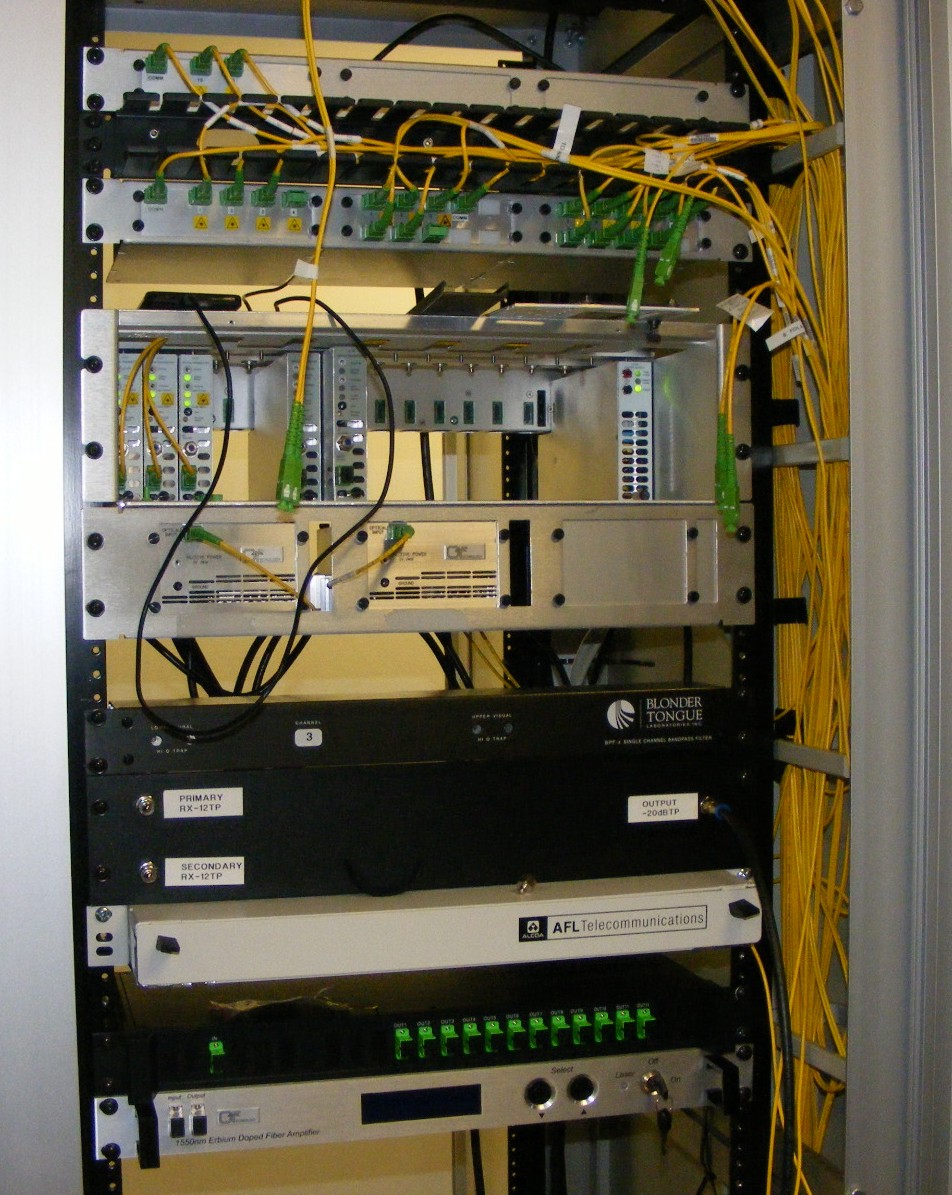 This equipment in the north end of Terminal A will provide a redundant service for the CATV signals and basic Direct TV satellite signal distribution to three service areas in the north end of the terminal.  An unbalanced 35% / 65% optical splitter is in the center of the rack frame in this photo.  The devices on either side in the frame a balanced 3-port optical splitters.  The fiber optic switch will have two optical inputs when all fibers are connected allowing a fail safe source of the optical signals that feed CATV signals to equipment closets in the terminal. 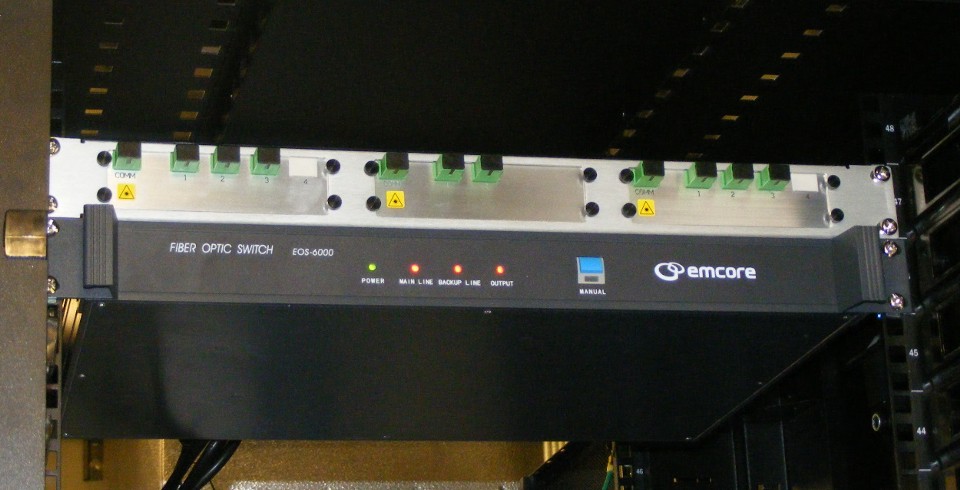 Here are the folks I have been working with on this project.  Pete Moxley works for the airport and is standing at the left of the photo.  I apologize for not having a suitable hat today and the bright sun causing my squint.  Mark Dixon maintains all the Olson Technology fiber equipment from the existing 2009 installation.   I am training him on the new equipment being installed this week.  The guy on the right in the blue work vest is Kevin Adcock from Able Communications.  His company won the contract to do the work of installing all our new fiber equipment and many new HDTV displays in Terminal A. 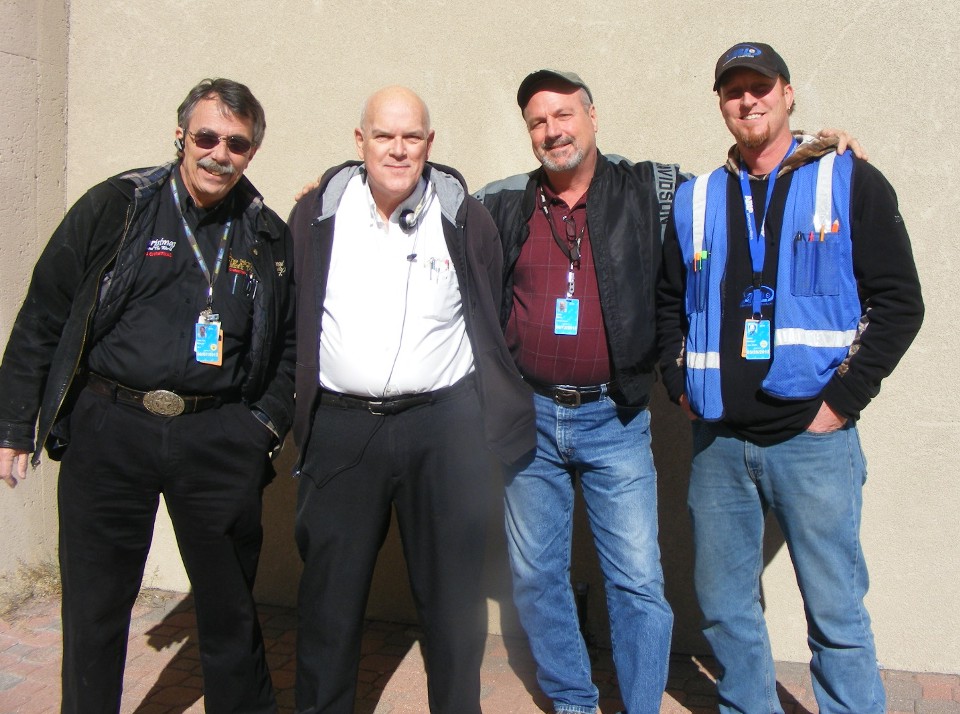 I filled some of my time this week with more customer sales meetings when I was not busy with the airport project.  The airport job was completed by the end of the day on Thursday for me. I traveled Thursday evening getting close to Little Rock, Arkansas for a sales meeting there on Friday morning, December 14 and another meeting in Memphis, Tennessee later Friday afternoon.

December 15, 2012:  The last two weeks on the road for the company deserve a day off with friends and talk about airplanes.  I am spending this Saturday in Huntsville, Alabama with David Edgemon.  We met at the Moontown Airport east of Huntsville on US 72.  David has a hangar there with both of the airplanes he built kept there.  He has changed the content of his instrument panel of the RV-8 again.  He has been adding new Dynon equipment for ADS-B support and information display.  His panel looked like this in the beginning.  There is a new display in the center replacing both of the "smaller" Dynon displays seen here.  The left side of the panel has been replaced with smaller items, and there is one more ADS-B unit needed to send out his position data.  I apologize for not taking a photo of the new version of this panel. 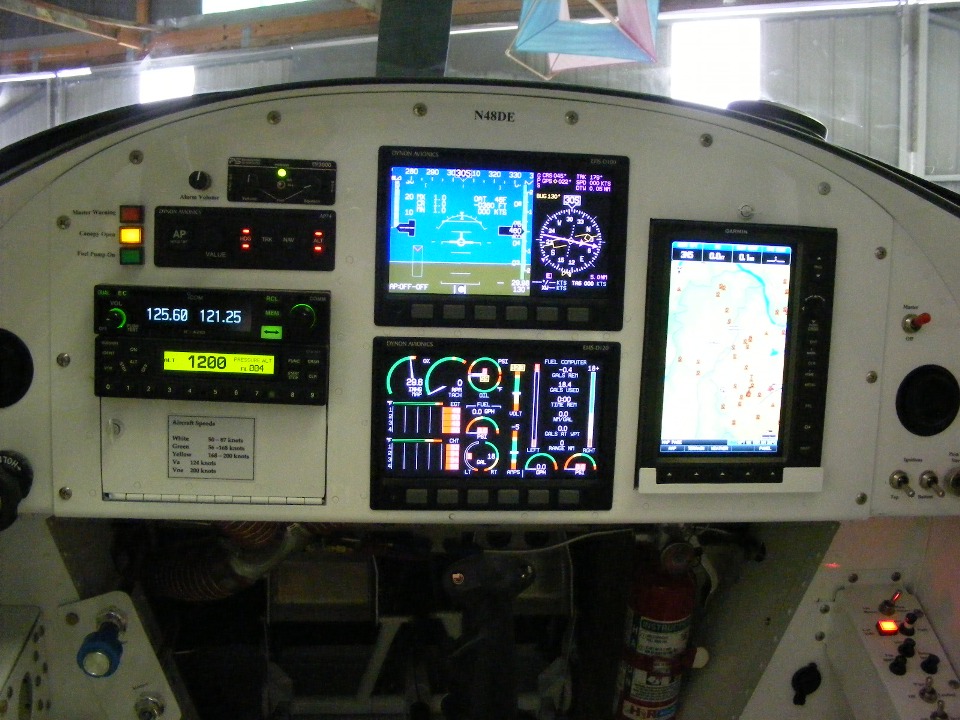 I had called Wendell earlier this morning to let him know it was the Saturday for the EAA Moontown Chapter to have a fly-in breakfast fund raiser as they do every month.  It was not long before Wendell called me back asking where I am on the field.   He and Ron Knowles had flown over here for a visit.  I last saw Wendell the day I took off with my plane for Florida on October 7, 2012.  I got David Edgemon to pose with Ron and Wendell before they loaded up for the short flight back to Folks Field near Chickamauga, Georgia. 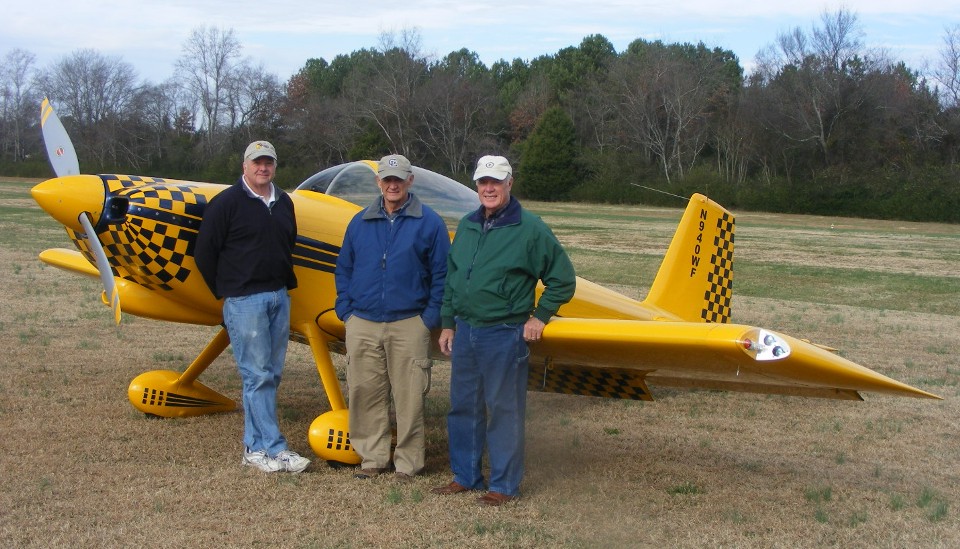 The "Moontown Control Tower" in the background and the grass strip have been seen in my photos from my earlier visits here.

Here is the crew of RV-8 N940WF taxiing past the FBO and heading for the runway before departure. 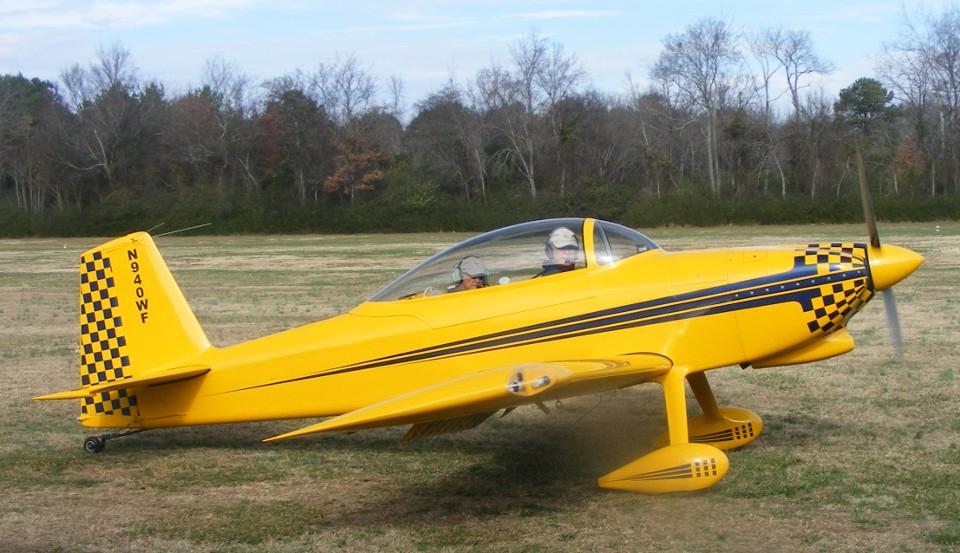 David stopped at a hobby shop on the way from the airport back to his home.   He picked up an HO-scale model train for his son.  We went out to the shop where he built his RV-9A and RV-8.  He has new airplane under construction.  The plans call it a Bearcat, but it has nothing to do the Grumman F8F Bearcat that was built after World War II.  This airplane looks a lot like a Piper Super Cub with a steel tube welded fuselage and tail feathers that will be fabric covered.  The wings are all aluminum and it will do very good short field landings yet fly at 120 knots.   David is doing all his welding with a torch, not an electric MIG or TIG welder. 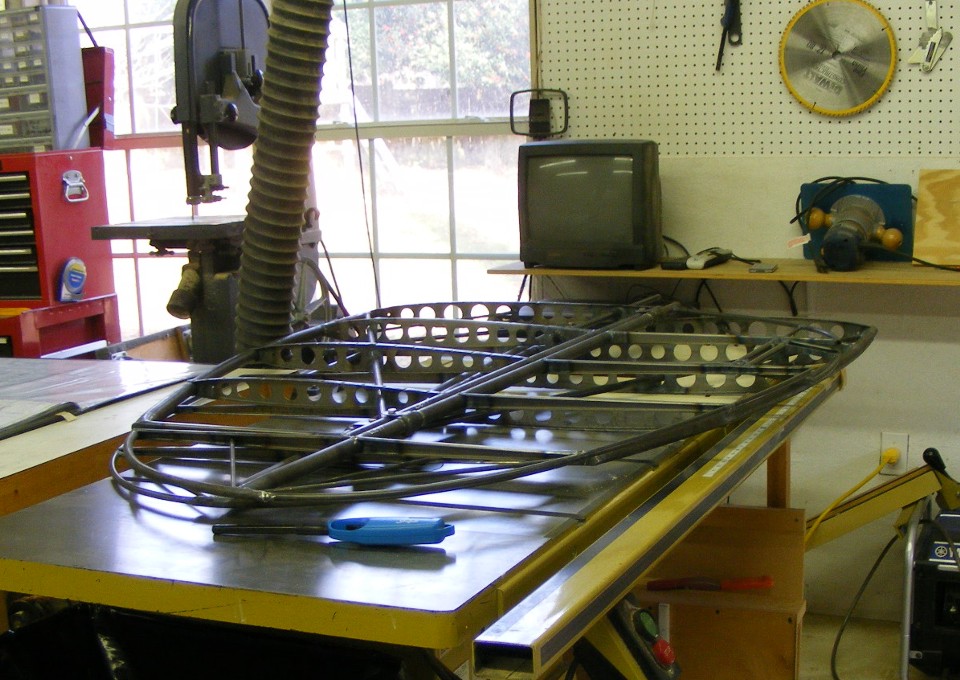 David bought the full wing rib kit and spars for this airplane.  The nose ribs on this table should look familiar as they are from the same vendor that builds the ribs for Van's Aircraft kits.  The wing spars have not yet been delivered.  That other airplane in the background is for his son to learn to fly.  It is a radio-controlled Telemaster, a stable and docile design from the late 1970's.  That radio below the fuselage is a new digital transmitter. 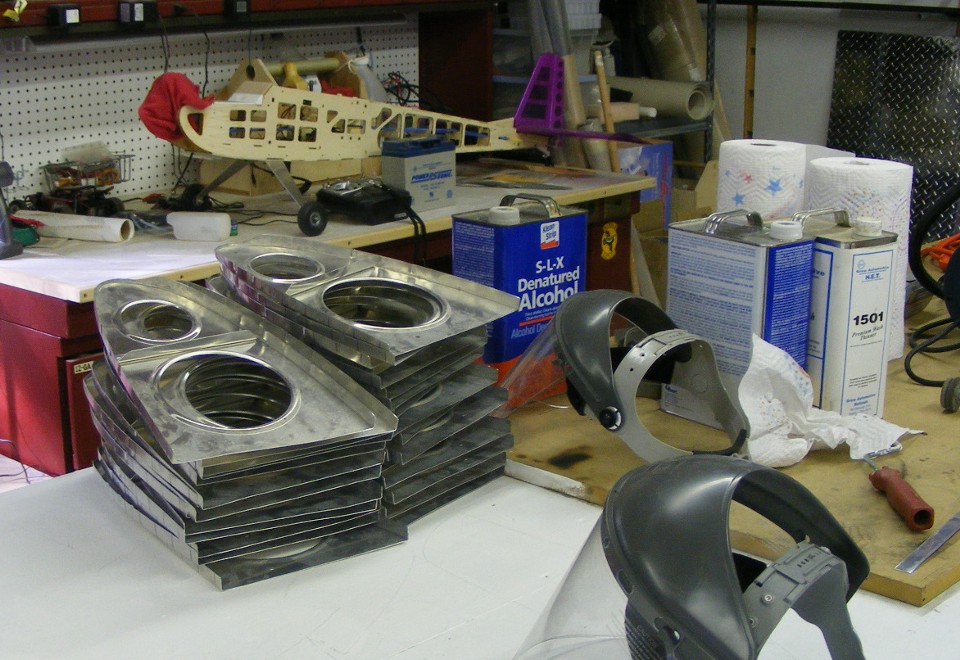 The other rib sections are on this end of the work table, along with he HO-gauge model train set brought home from the hobby shop today.  These ribs are large enough to need stiffeners, also seen on the table.  The wing span will be 38 feet on this airplane when completed.  The fuselage may be fabric-covered, but the wings will have aluminum skin panels and no fabric. 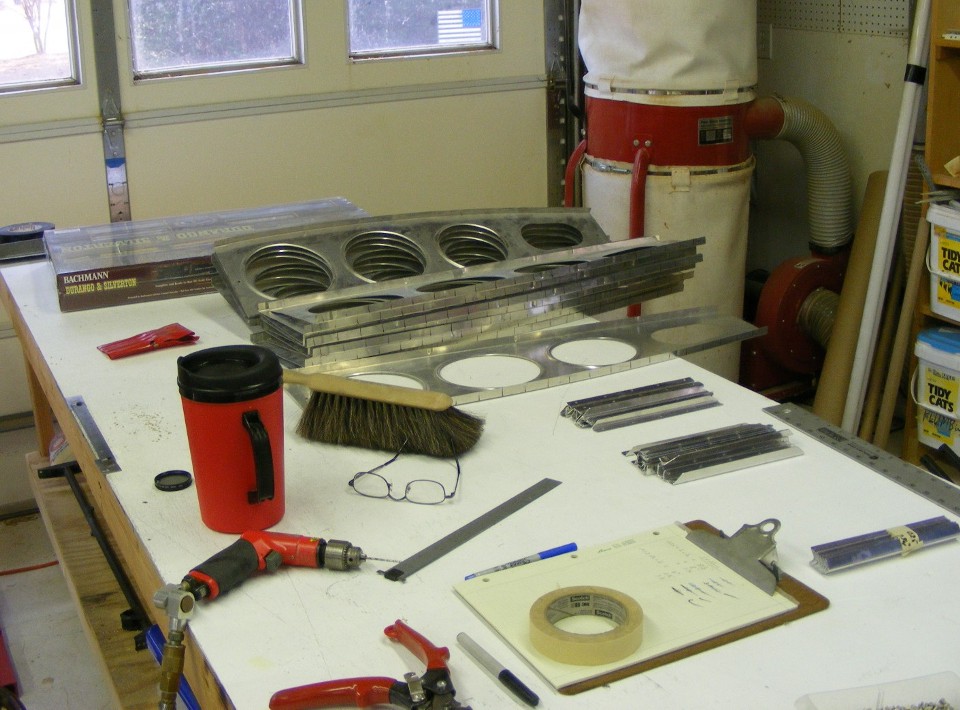 Those long steel tubes on the back wall are the fuselage parts cut to length and ready for welding.  David was telling me all about this new airplane before we put the new HO train together for Michael to see.  That steel work table at the right was built from the same chrome-moly steel tubing. 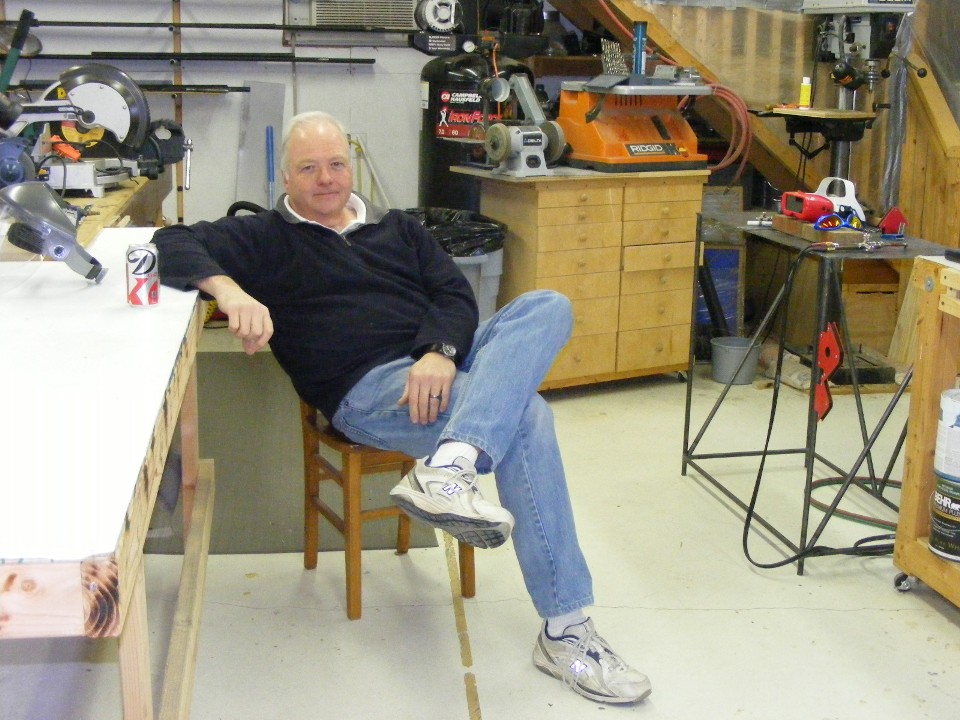 David also had a 1963 Lionel train upstairs above the garage / shop.  It used the same motor and a similar power transformer as my Lionel train from 1953.   The memories of my youth came flowing back and merged with my electrical skills to get the older train working again.  At the end of this Saturday, we all went out to a good Mexican Restaurant.

December 16, 2012: I took a leisurely ride from Huntsville to Birmingham, Alabama in rainy weather today.  I went by the location of my first business meeting for Monday morning and checked into a nearby hotel.  The high-speed internet is good here via Time Warner Cable.  I composed the previous page updates last night in the motel in Huntsville and completed this page today in BHM.   The internet connection yesterday was slow and I decided to post these new pages today here in BHM.