October 27, 2013: I used my hedge trimmer at the new house to get things ready for Halloween.  Here is a photo before I started trimming. 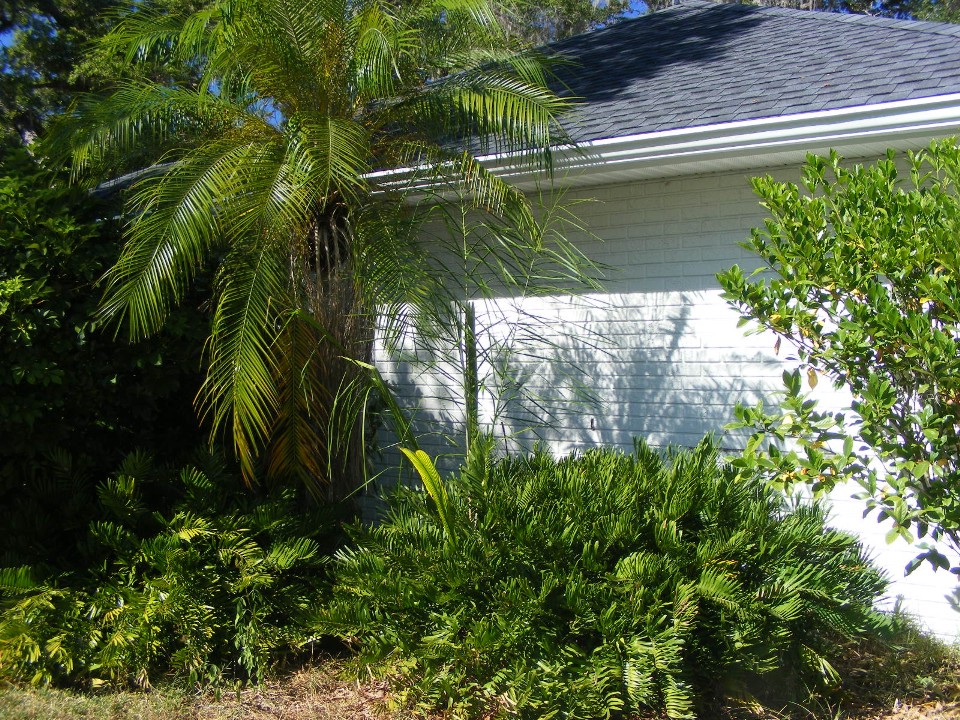 And here is the result after pruning the palm tree and cleaning up the low bush as seen from the sidewalk near street level. 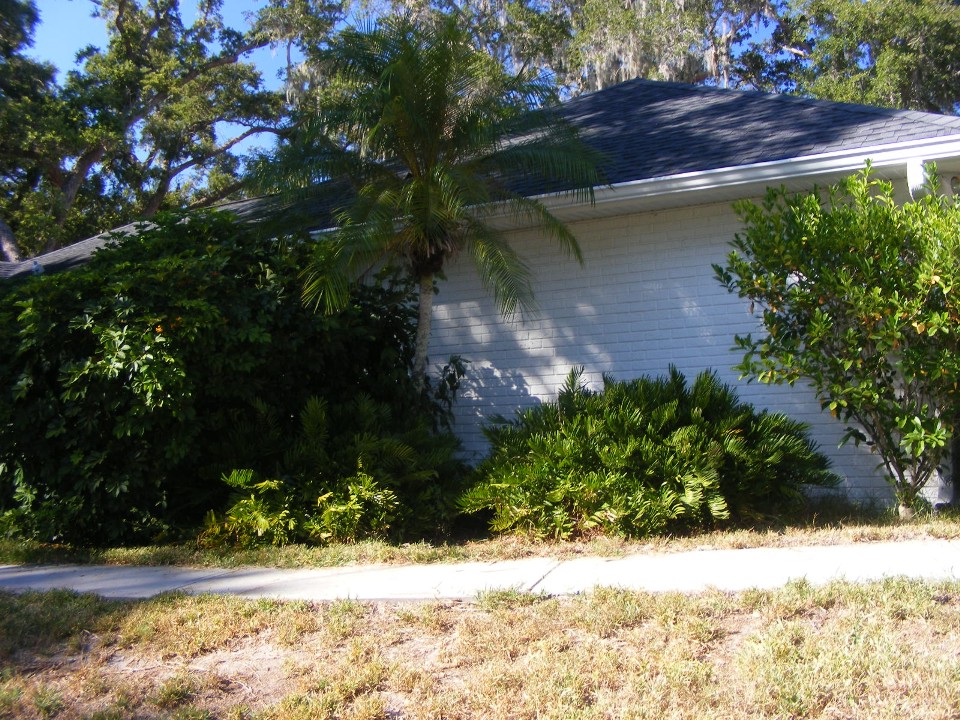 The mail man asked us to trim the shrubbery by the walkway to the front door.   It made the place more accessible for the kids coming the evening of October 31 for some treats. 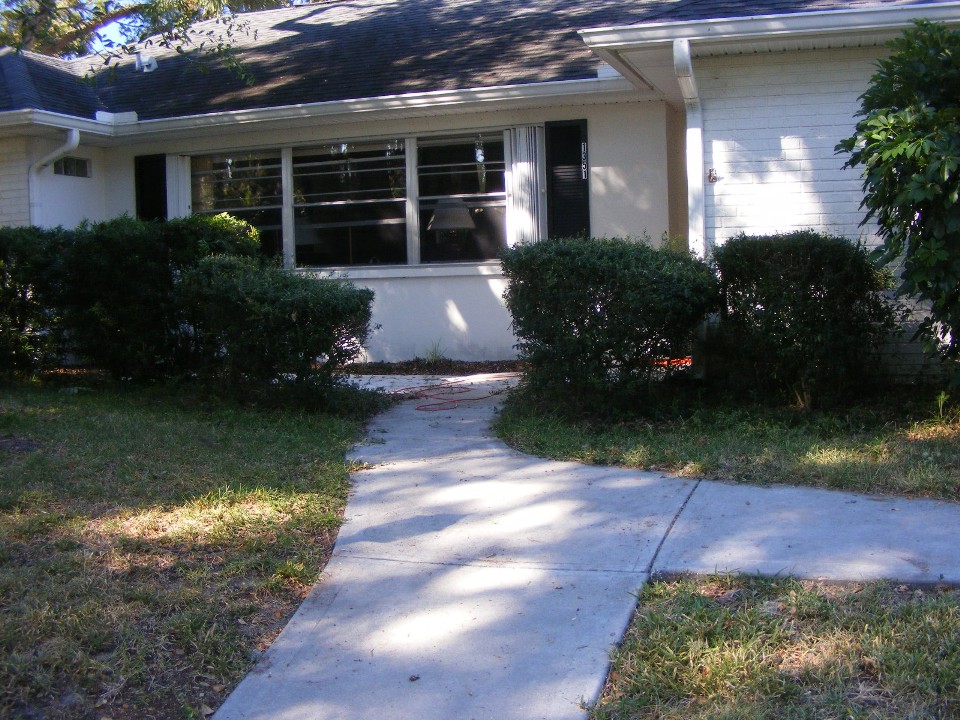 With the chores at home out of the way, I get to do some work on the airplane.   I have suffered from some weeping rivets on the bottom of the left wing fuel tank.   Today is the day I finally scraped away the paint and sanded the surface to apply some J.B. Weld epoxy to plug the slow leaks. 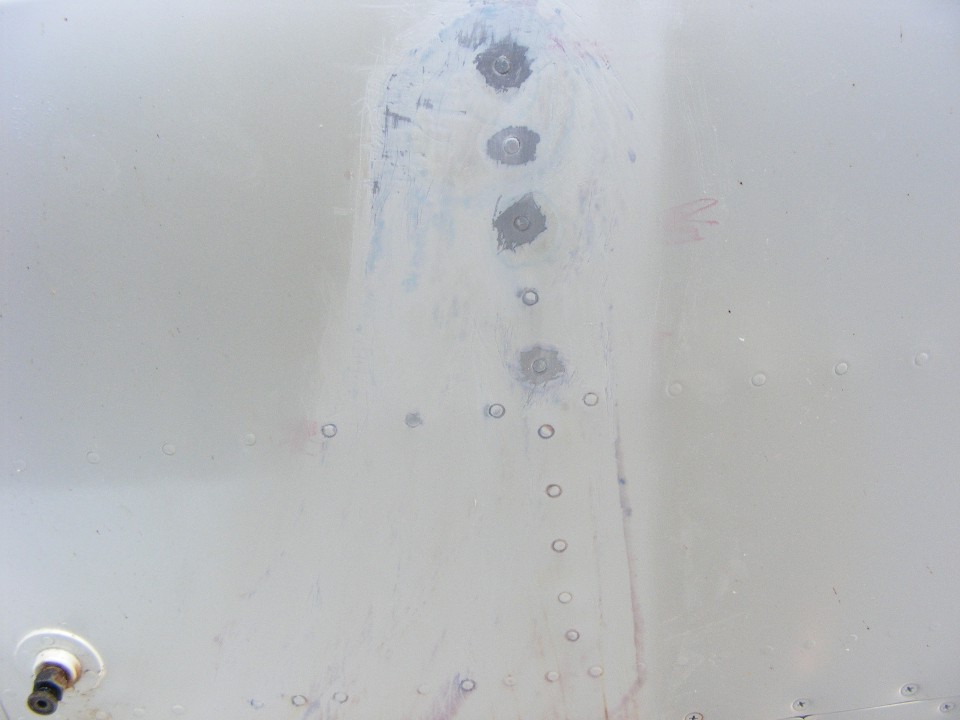 Here are two rivets seen before the work, and another picture after the prep for the epoxy treatment. 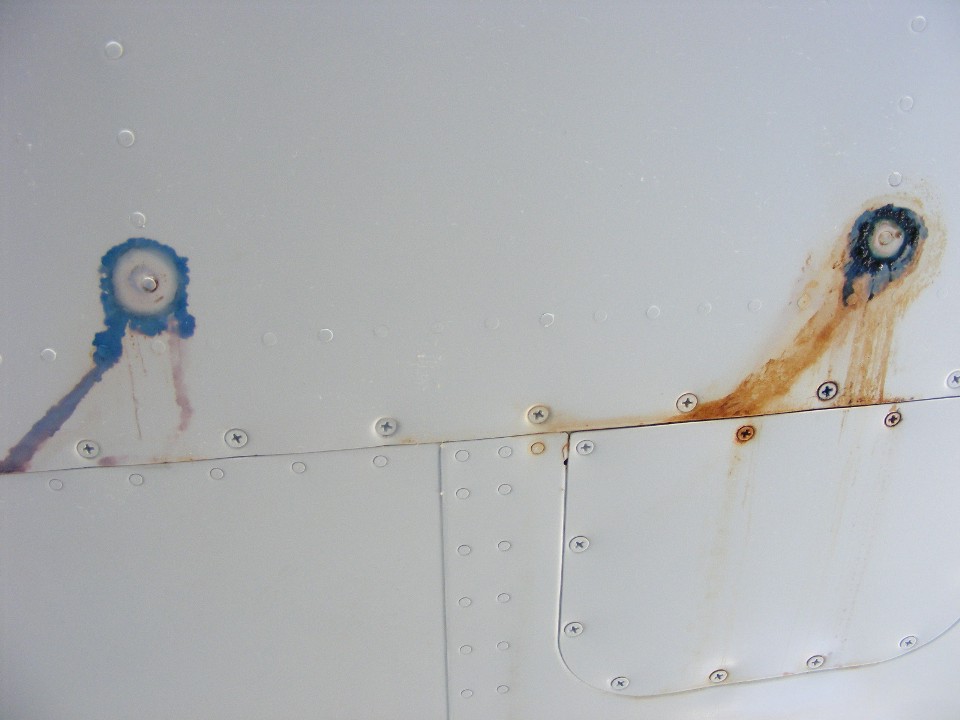 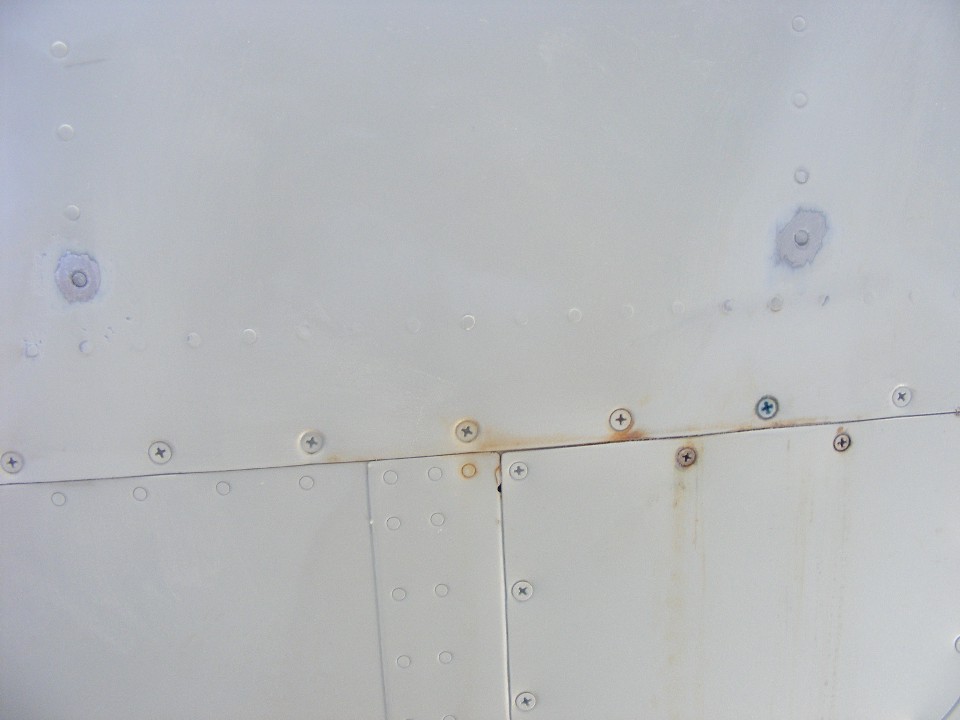 From this angle, you cannot see where I was working on the underside of the wing with the epoxy sealant. 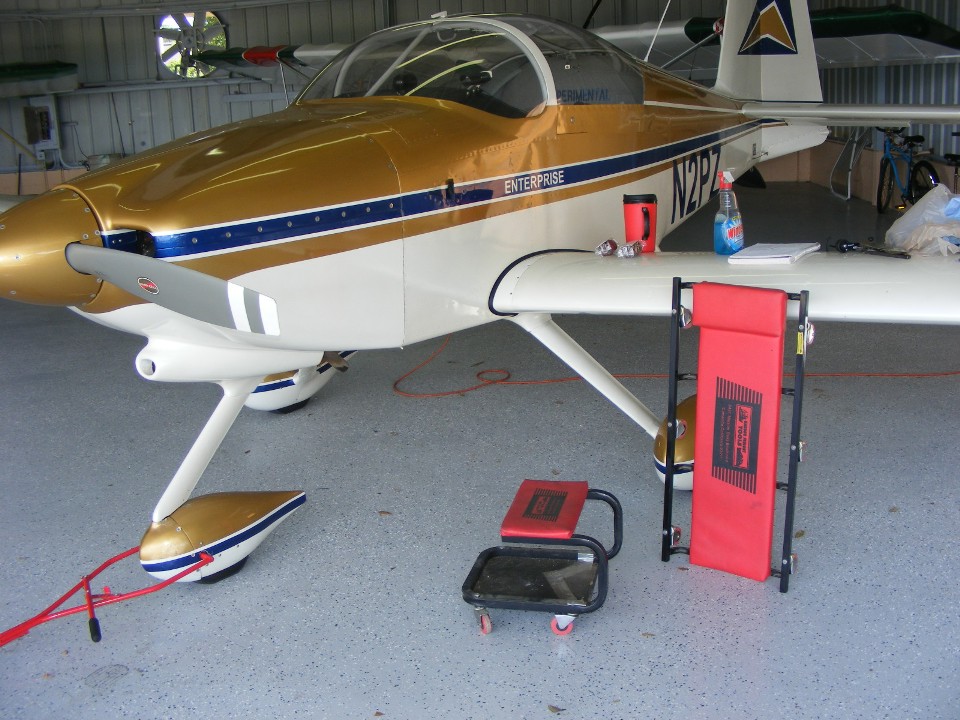 I came back a few days later to see how well the epoxy had cured.  I used this day to top off the brake fluid in the left main landing gear.  It is so much easier to refill the fluid by pumping it UP from the wheel cylinder.  There is no need to "bleed" the brake lines using this method.  It is the same way I filled the brake lines when the airplane was first built.  I also put air in all the tires to get them up to normal pressure.  You can see my yellow valve cap on top of the tire.  The top part of the cowl was off to confirm the amount of brake fluid in the reservoir. 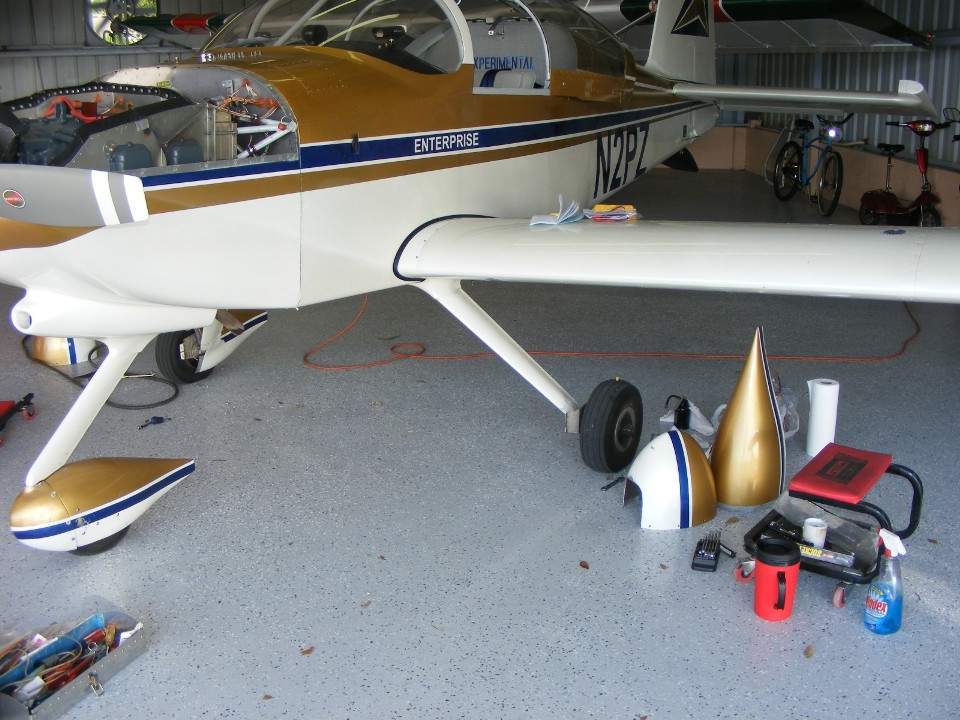 And of course, what would be the use in getting the airplane ready to fly if I did not go somewhere for lunch?  It was a day with rain showers that were easily avoided.  It is all part of flying in Florida. 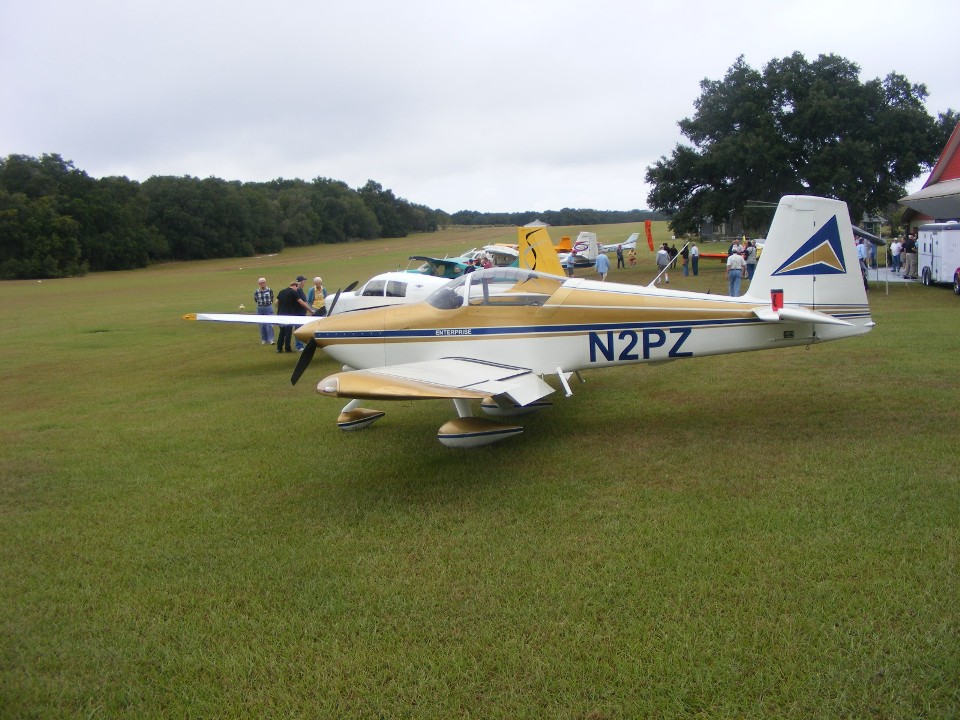 November 24, 2013:   Sundays have typically been the day to update the web site as it is again today.   Here is the report for yesterday's activity.  Normal life has returned after the recent move to the bigger house.  The Florida room is finally empty from the items that were stored out there.  All the stuff from storage has either been sorted and put away or donated.  I bought a weight training bench via Craig's List and have set it up in the Florida room.  I got out my two 15-pound hand weights and went through my upper body routines from my 2011 cardiac rehab program.  I also pumped up the tires on my 12-speed bicycle and put about 2 miles on it around the neighborhood.

After lunch was a time to check out the dead antenna on the Cadillac.  The whole assembly needs to be replaced.  I found one on ebay for a reasonable price and placed the order last night.  After getting the antenna only put back on the car, I took it to the car wash and the Pearl White paint job still looks good.  I continued to the airport to check on the recent leaks in the left fuel tank to find ONE of them is still "weeping" with a blue fuel stain around it.  I guess I will have to fly off some of the fuel until I can get that left tank to have less than FIVE gallons remaining.  I can then pump that tank completely dry using the electric fuel boost pump.

The weather was good yesterday with light winds with no more than 10 mph wind from the East as I returned from a local flight that lasted just under one hour.  I climbed out of Rockledge (21FA) to 2,500 MSL and lined up with the localizer from Titusville Executive (TIX) and headed that way to track the localizer.  I broke off the approach practice when I intercepted the glide slope and headed south.  I crossed Melbourne International Airport (MLB) at 3,500 MSL and did a little flight-seeing near the new home neighborhood and finished with a pass over Valkaria Airport.  I had the airplane crusing at 155 MPH indicated airspeed for much of the flight. 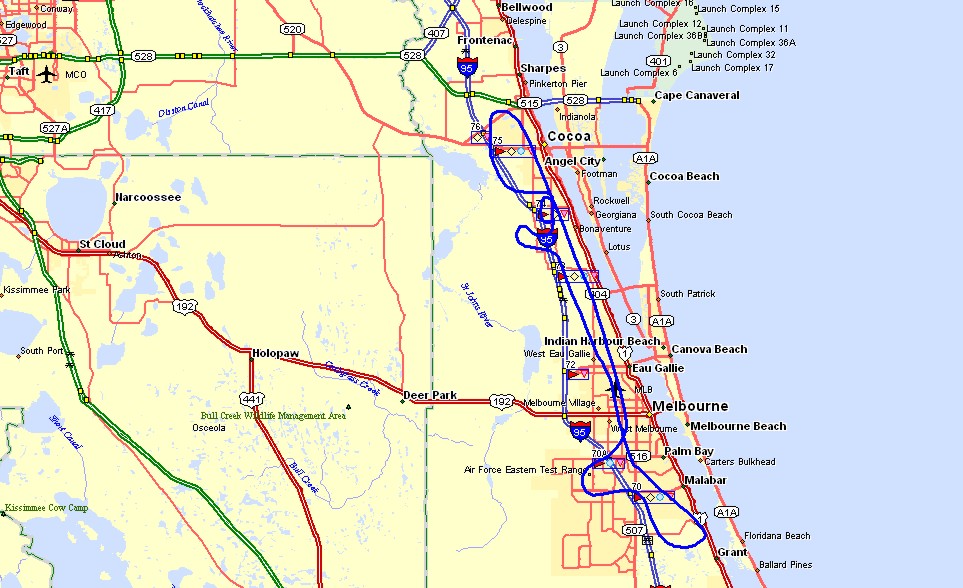 Here is the northern limit of the flight showing my turn away from TIX after intercepting the ILS at 2,500 MSL.  This old map shows the airport as Space Coast Executive in Titusville. The TIX call sign comes from the words "TItusville eXecutive" airport.  The airport is at the top of the map below with my GPS ground track entering at the bottom on the runway heading, then turning right and proceeding on a southeastern heading. 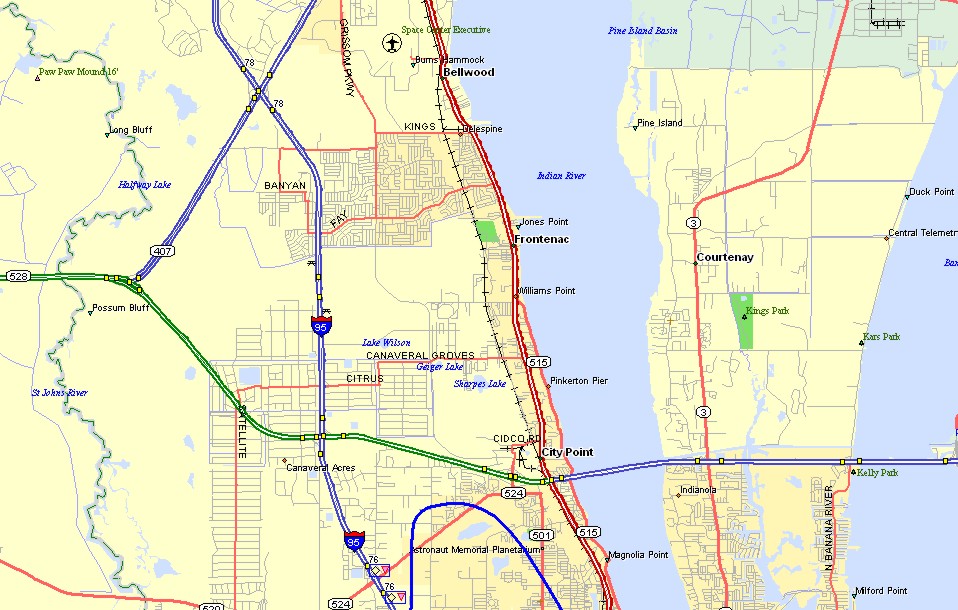 I flew over the Palm Bay area south of Melbourne to get a look at the former air force base as it exists today.  It is currently an antenna site for the Air Force Eastern Test Range.  I saw where the old runways were located by the way the grass is mowed inside the property.  I also went down to Valkaria Airport to look at the new hangars and discovered the only active runway is 14 / 32.  Runway 10 / 28 was out of service with construction.  I always cross MLB well above their class D air space.   I was at 3,500 MSL going south and 4,500 MSL returning north to Rockledge. 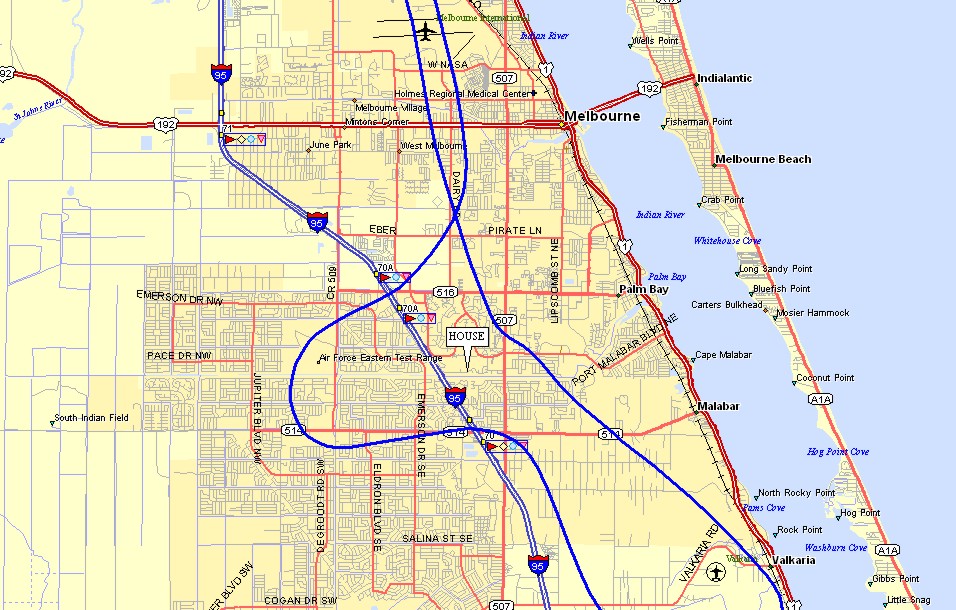 When I returned to the air field, there was an airplane on the runway.  I made a short trip around the pattern and landed to find the airport owners had just returned with a Ran's ultralight airplane from Saint Simon's Island, Georgia.  The sun was about to set as I touched down on runway 36.  The hangar now has FIVE airplanes inside.  Since I have the longest wing span, the only place where my airplane fits is in the same place at the SW corner of the hangar near the door.  The GPS ground track below shows my departure west of the airport over Barrett Lake as I turned toward Titusville for the ILS intercept.  The southbound track is the straight line from Eyester Boulevard parallel to US 1.  The return track enters the map near Murrell Road with a descent continuing out to to the west of I-95 before turning back to enter the pattern on an extended approach to runway 36.  I could not believe how good the pattern looks for the go-around while the ultralight was on the runway. 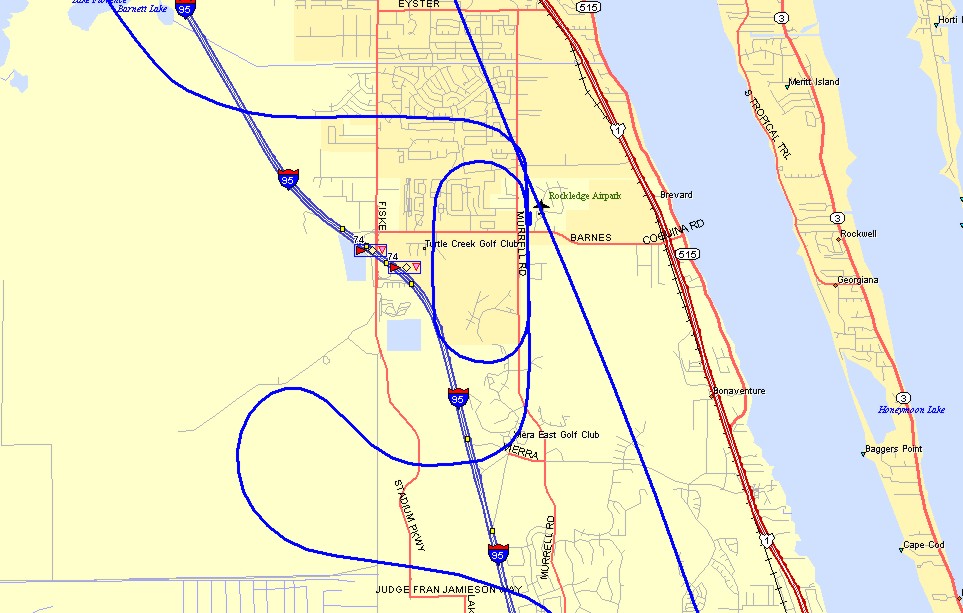 The Hobbs meter added 0.9 hours for a total of 349.3 hours for the airplane.   I needed to move the airplane out of the hangar to let the new airplane find its place inside.  The flight was made in the late afternoon.  I saw only one airplane inbound for Melbourne from the south as I was turning over the old air force base.  I always listen to the MLB tower when I cross over the top of their air space that is from the ground to 1,900 MSL.  It was dark when I returned home in Palm Bay just after 6 PM Eastern Standard Time.  As I write this on Sunday morning, I realize that we are about one month away from the shortest day of the year in December.