December 6, 2014: I headed up to Leesburg (KLEE) to get some fuel as theirs is the lowest price in Central Florida today.  I stayed to the west of the Orlando Class B terminal area between Bartow and Leesburg,  This map shows a few airports northwest of Orlando in Lake County. 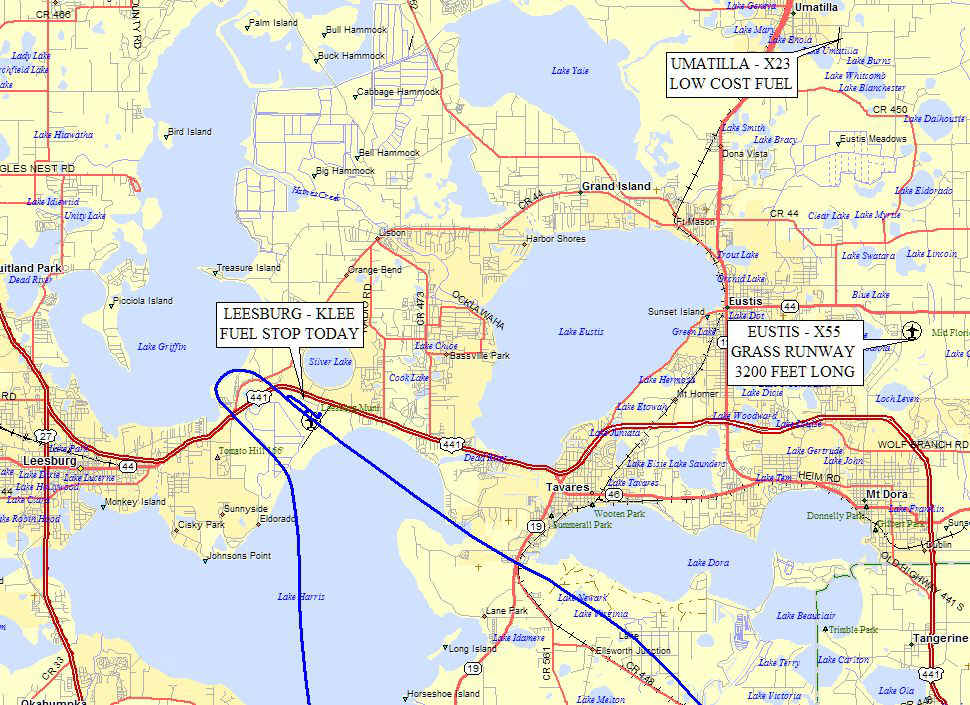 As the morning sun heats the land below, the haze seen earlier is less of an issue.  Here are some of the lakes seen on the map above. 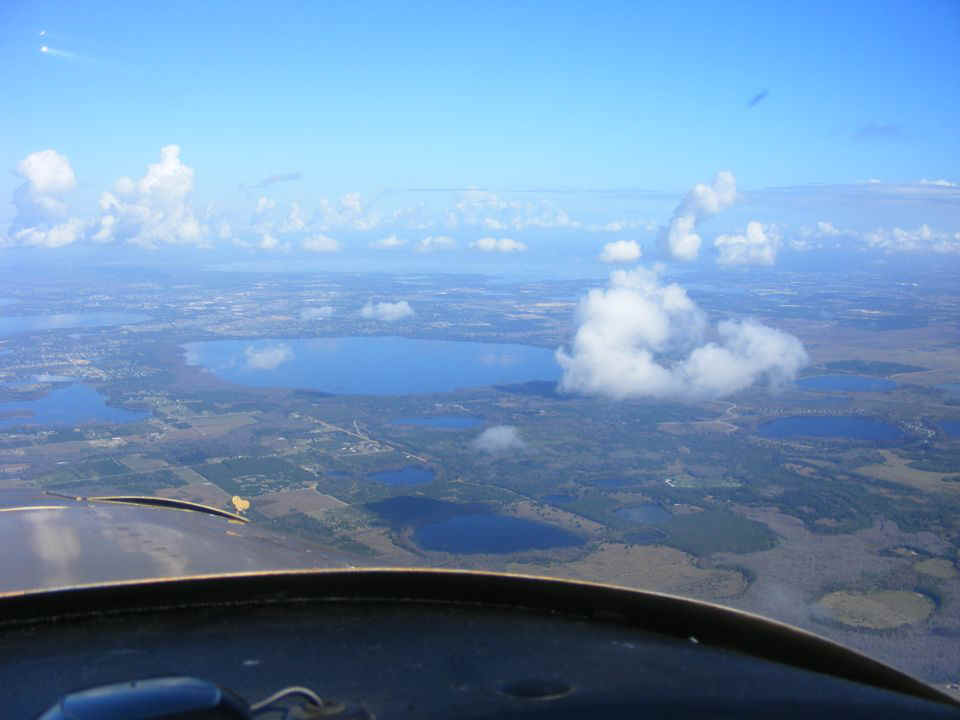 I took this shot immediately after the one above, but this one is looking due north on my course toward Leesburg Airport.  I am listening to the control tower at Leesburg and hear some other airplanes heading there.  When I arrive in the pattern, one airplane has just landed and another is turning base leg to final approach. 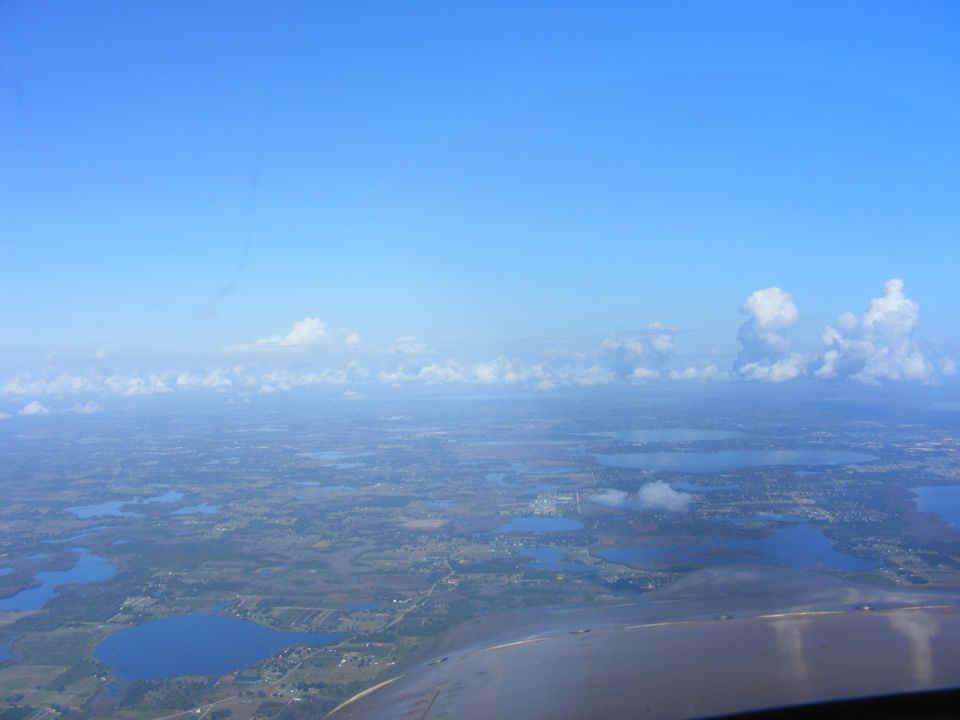 A helicopter was getting fuel when I taxied to the fuel area.  There was also a Lake Buccaneer amphibian there to get fuel also.  I was the last of three aircraft waiting for fuel.  That orange and white barrier at the end of runway 21 is there to deflect any jet blast as there is a four-lane highway just north of there, US 441.  That runway is 4,900 feet in length.  The tower had me land on runway 13 (6,300 feet long) since the wind was favoring it.  I took this photo while still sitting in my airplane waiting for my turn to get self-serve 100 octane low-lead aviation fuel. 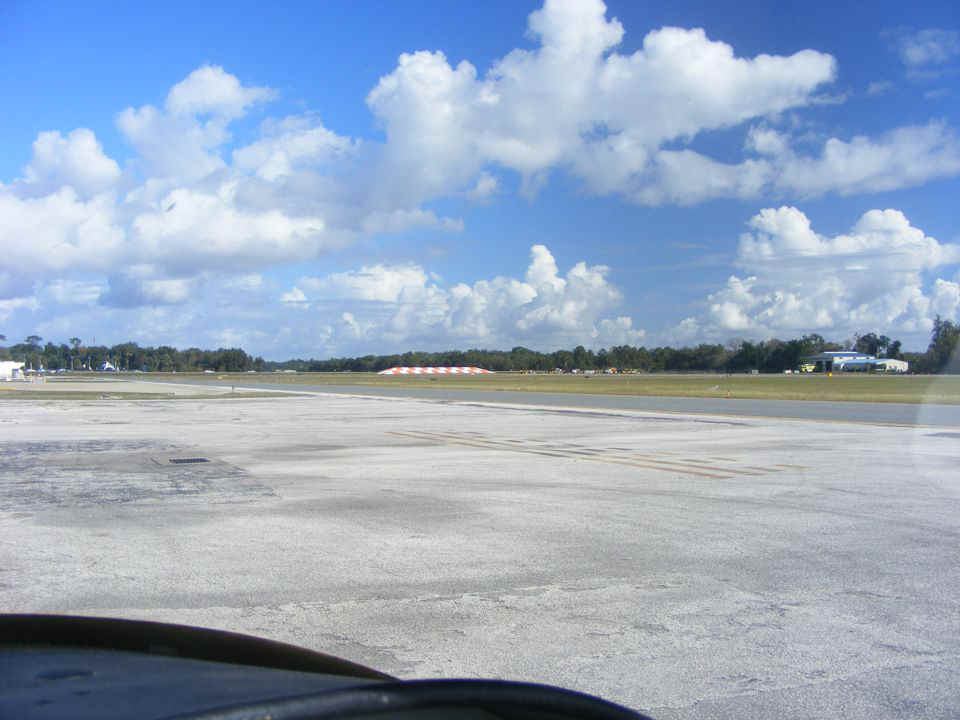 The helicopter departed and the amphibian took his turn at the fuel pump.   His fuel tank is behind the cabin in the center of the fuselage and below the engine. 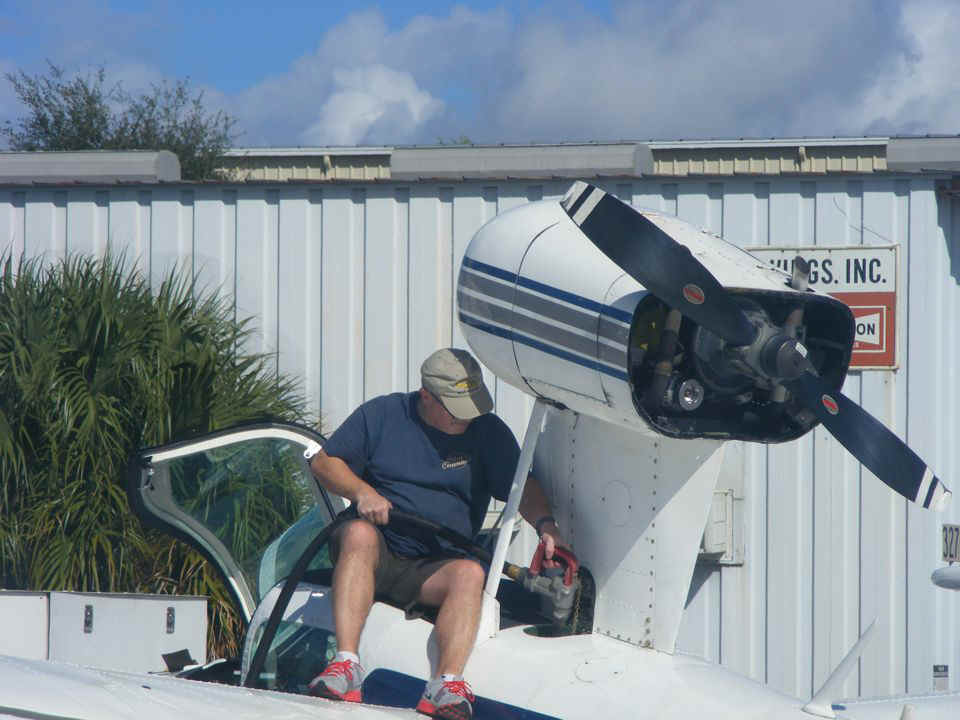 Here is a view of the entire airplane as he is finished fueling. 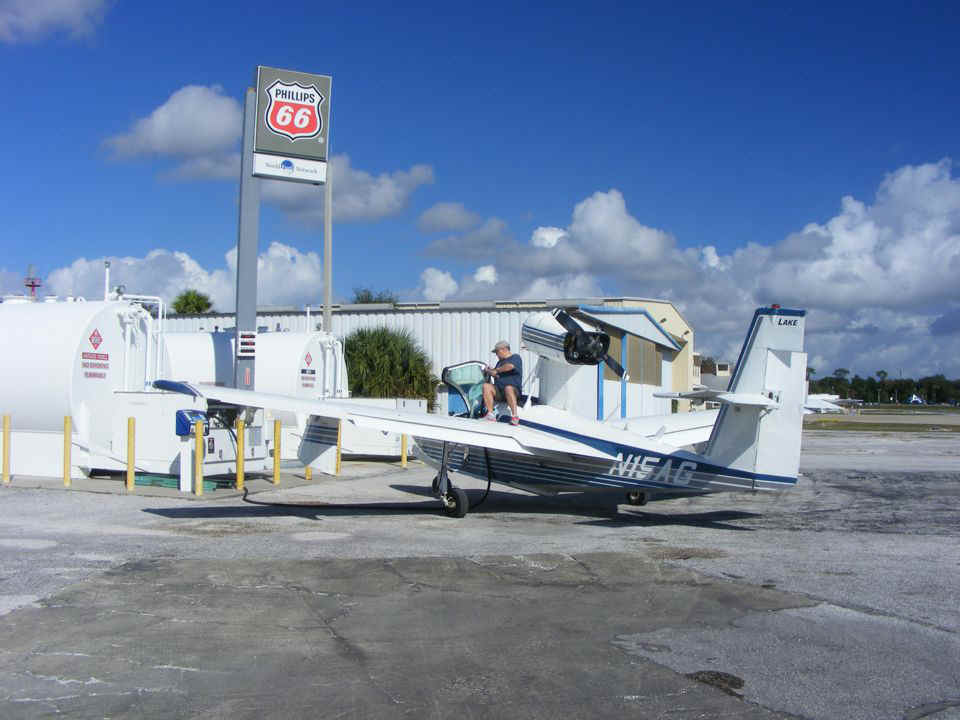 You can see how close the self-serve fuel pump is located to the control tower.   I took this photo after fueling, just before my departure.  The map at the top of the page shows my arrival and departure on runway 13 and heading southeast toward Orlando instead of going around it as I usually do when I get fuel at Umatilla. 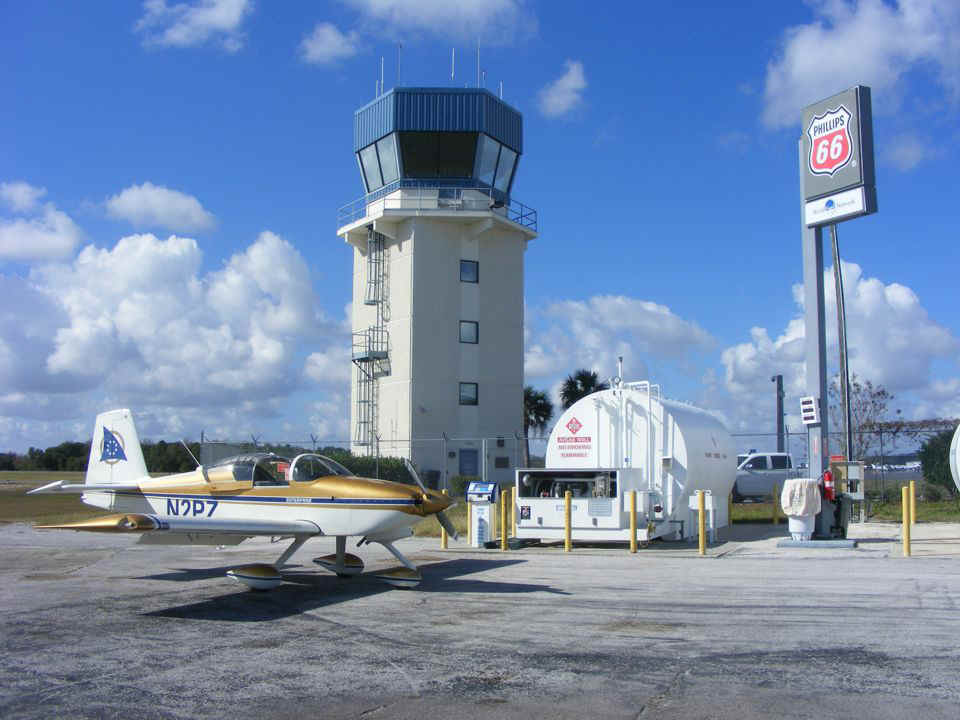 I contacted Orlando Approach and received clearance to enter the Class B airspace for an eastbound crossing over the top of the Orlando International Airport.   The clouds were building up over the city and I had to climb up to 10,500 feet to remain in VFR conditions.  I felt very lucky to see how the clouds cleared below to give me a good view of the airport.  The airliners are arriving and departing well below my altitude.  This is the only airport where two supersonic Concordes landed on parallel runways simultaneously.  The two runways are seen at the leading edge of my wing.  That happened on opening day of Epcot Center at Walt Disney World.  The mayor of London was on the British Concorde, and the mayor of Paris was on the French Concorde. 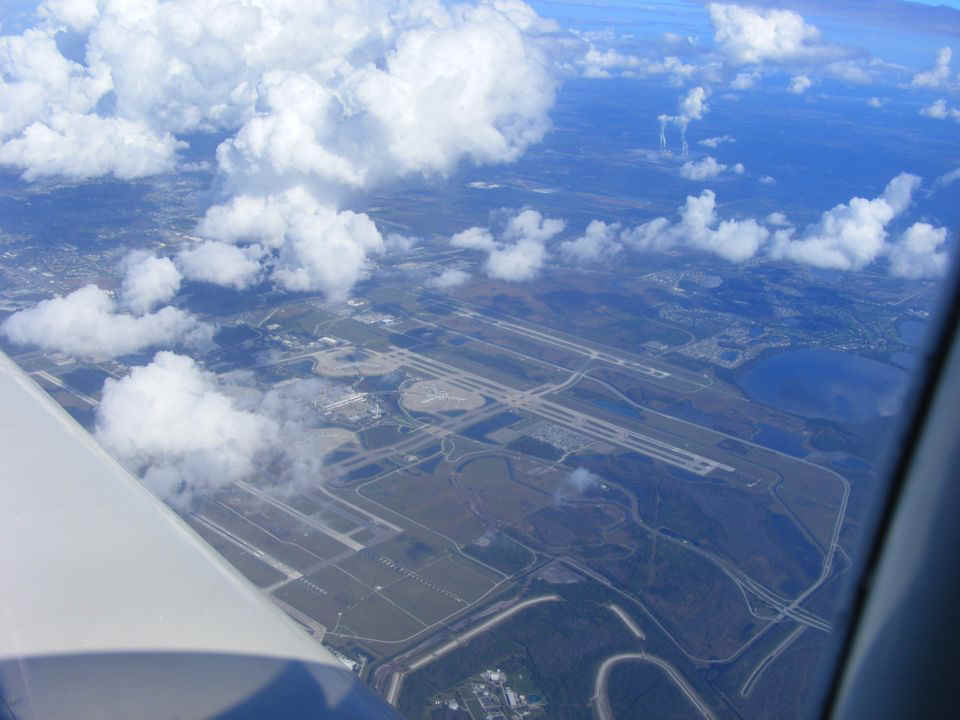 I had time for just one more photo and for the first time, I have taken a photo that shows the shadow of my hand holding the snapshot camera above the video camera.   My sun shade casts the large shadow on my wing from the main wing spar aft in this photo showing the left wing.  When I took my first commercial flights from this airport, there were only TWO runways.  The terminal was at the north end of the runways near the Beeline Expressway.  The terminal and the four concourses seen in these photos came later as this became a major tourist airport for Walt Disney World and the other major attractions here in the Orlando area.  This was originally McCoy Air Force Base before the first commercial airline terminal was opened here.  There is a B-52 parked at the north end of the airport property and visible from the main entrance.   The Beeline name was changed to Beachline in recent years. 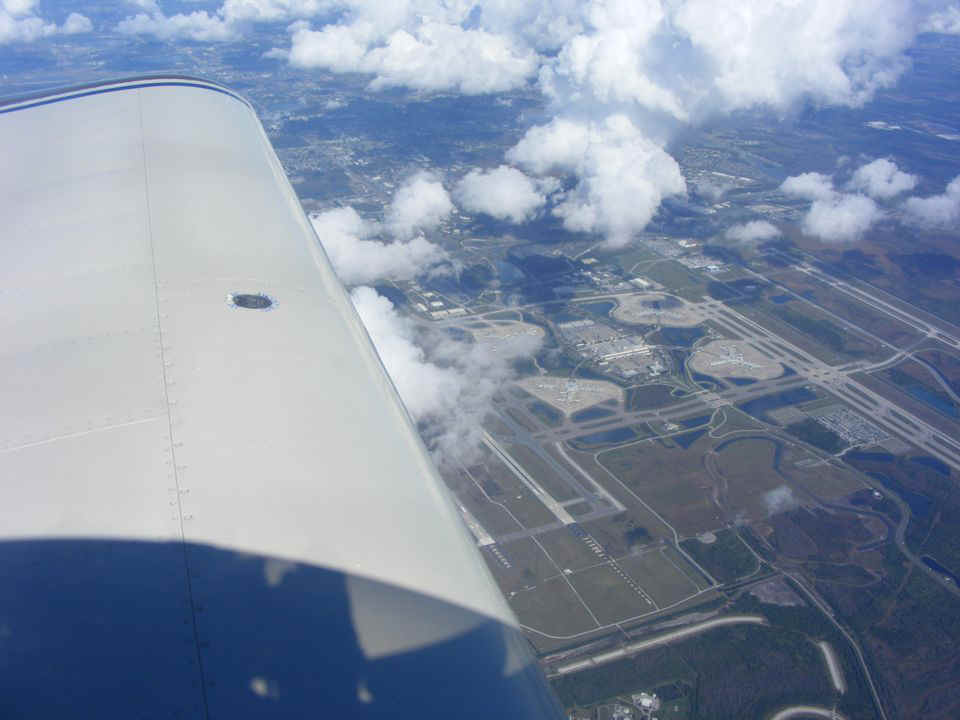 This view looking east shows my route of descent toward home.  I flew past that rain storm on the south side of it (right side) and below the highest layer of clouds.  This photo was taken from an altitude of 9,500 feet before beginning my descent. 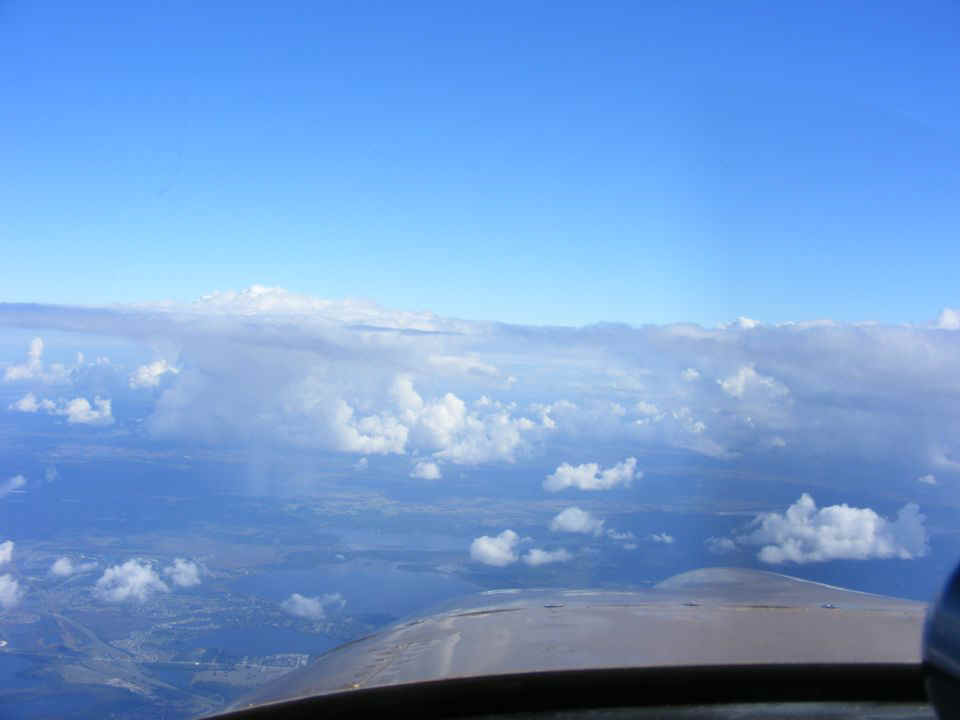 This map segment shows my path just south of the Orlando International Airport as seen in the photos above. 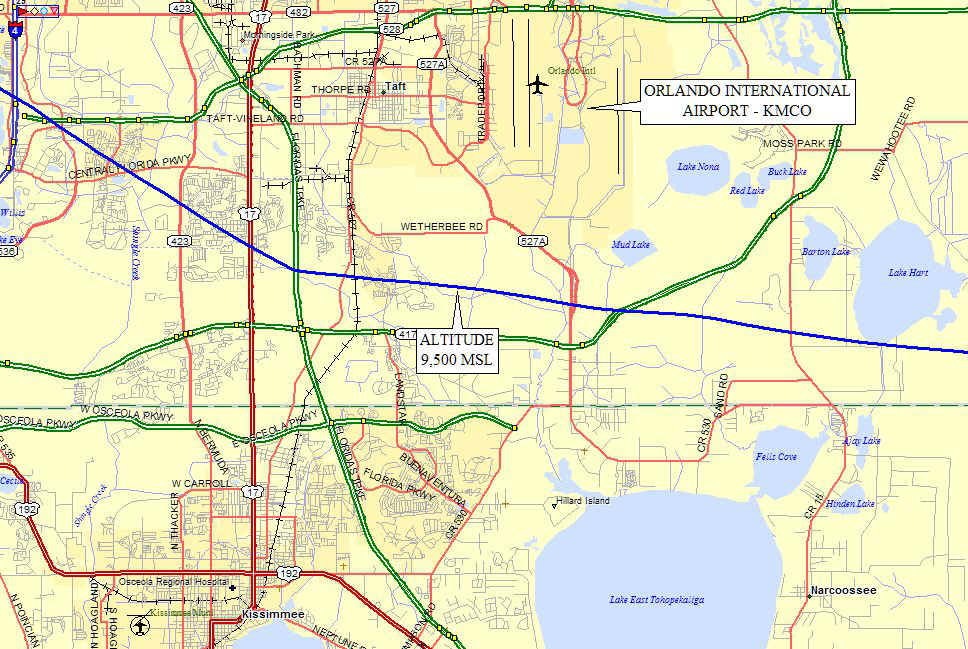 Here is the entire flight today that added 2.3 hours to the Hobbs meter and covered 241 miles according to the GPS ground track. 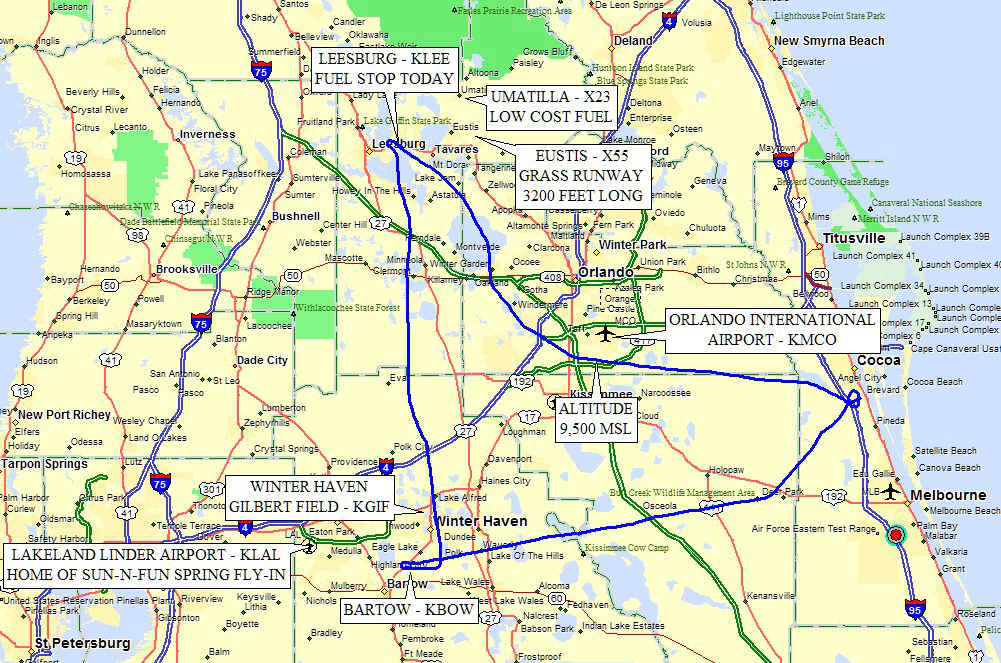 December 20, 2014: I drove down to the Valkaria Airport today for the pancake breakfast and met some of the local EAA chapter members.   There was an RV-3 parked next to the Citabria, but it left before I could get over to the parking area with my camera. 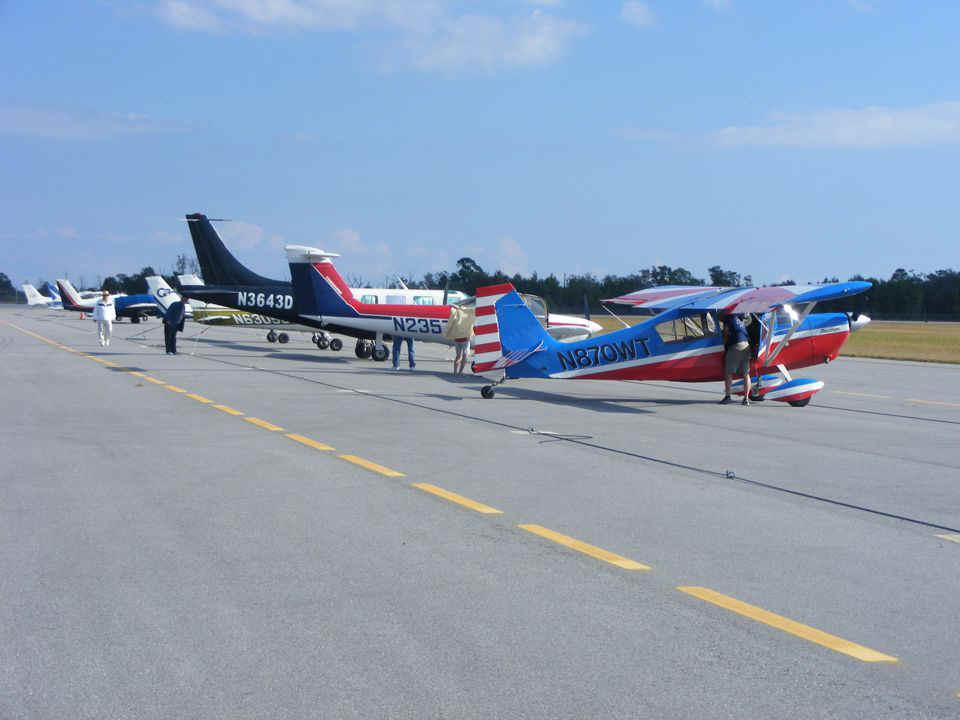 I met an RV-9A builder today.  When I gave him one of my airplane cards with the photo, he said he recognized it from the web.  Herschel Walls sent me two photos of his airplane.  This first photo showing his interior is dated May 18, 2013. 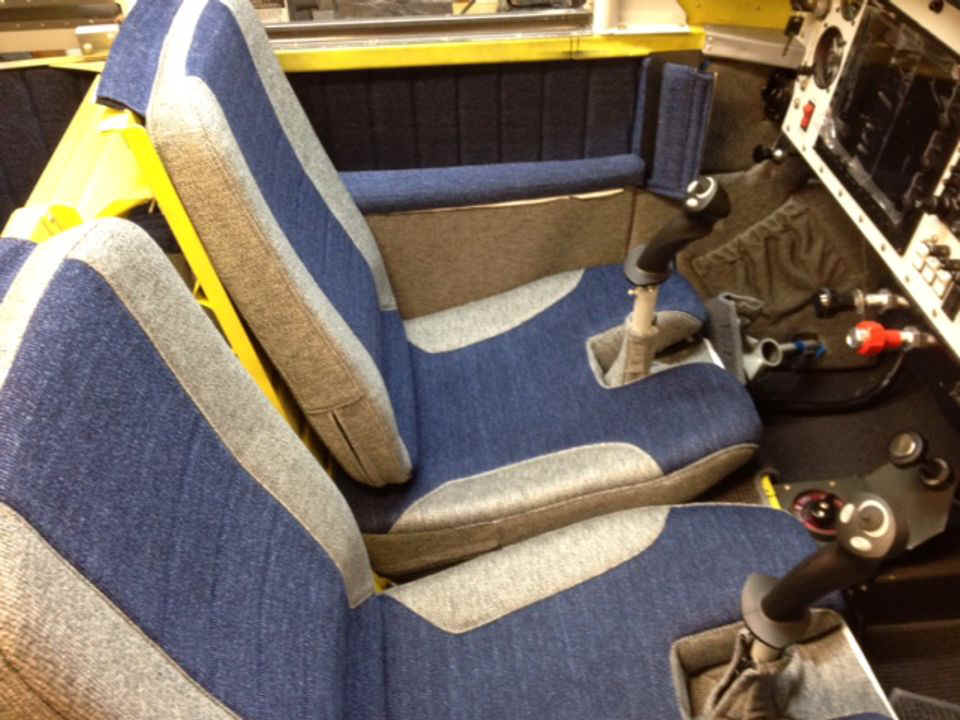 The second photo taken January 22, 2014 shows the fuselage after the canopy and windshield are completed.  I need to pay him a visit to see the current status of the airplane. 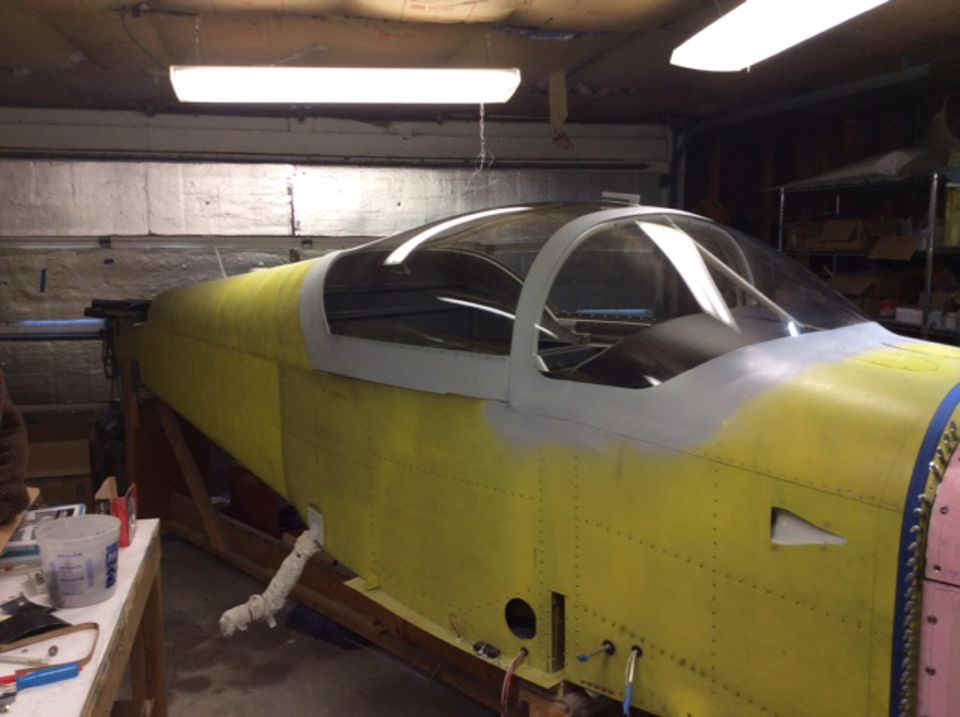