October 11, 2015:  These pages have been few and far between of late.  It is Sunday evening as I write this new page.  There has been no flying lately due to our airport being closed.  That I am assured is about to change.  Open or not, I won't be flying for the next two weeks as I have a road trip for the day job that will take me to Jacksonville, Tallahassee, Mobile, New Orleans, and on to Texas by next Friday night.

Customer sales calls mark the route to New Orleans and the 2015 SCTE Expo, a convention for the CATV industry and associated companies.  This is a show about engineering products and services for television cable companies BIG and small.  I have been in this industry since 1971 and know plenty of folks, both vendors and customers who will be there this week.  Next week will find me traveling from Round Rock, Texas north to the Dallas/Fort Worth area where I will be working with the DFW Airport folks to update the satellite and CATV fiber optic systems I designed for the entire airport service areas and the airline terminals.

From DFW the route back home will again visit customer locations as part of my sales duties.  The stops along the way will be in a couple of states along the way back to Florida.  I should be back home by Saturday evening, October 24.

I have been adding some new pages to my family section of this web site.   My sister is delighted with the old photos that have been posted.  I have several pages with some old photos, mostly from the 1940's, but there are some older ones.   There are plenty of photos to be scanned and related stories to tell along the way.   I just hope our younger generations of our family can appreciate that my generation was young at one time.

As for the airport status, I learned yesterday there is some minor paper work to be completed before flying resumes.  I will let you know with photos and news when next I take to the air in the "Enterprise".  In the mean time, I will try to find some interesting sights to share from the road trip that begins tomorrow.

October 18, 2015:  Sunday in Round Rock, Texas and time to post this web site update at the middle of my two-week road trip.   Jacksonville, Florida was the first stop with two customer meetings before lunch last Monday, October 12.  The company was observing the Columbus Day holiday, but I was making the rounds and finished the day at a motel in Tallahassee.  I had two early morning visits with distributors Tuesday morning, with the second meeting adding a stop to speak to a defense contractor in Fort Walton Beach, Florida as I was heading west.  I had an afternoon meeting in the resort town of Orange Beach, Alabama on the Gulf Coast.  My motel for Tuesday night was southwest of Mobile, Alabama adjacent to Interstate 10.  I had an 8 AM meeting with another distributor there who talked about a fiber optic job for a local college that would need RF fiber optic equipment made by the company that employs me for my day job.

One of the main reasons for my trip west was the SCTE Expo convention in New Orleans.  Exhibits opened on Wednesday, October 14 where I would be setting up my company demo equipment in the booth of our largest distributor.  I met a number of my long-time CATV industry customer contacts during those two busiest days of the trade show.   UPDATE November 8, 2015:  I was pleasantly surprised when I met someone who provided another view point from my cardiac arrest event on June 15, 2011.  This is Andy Ruffin who works with R. L. Drake.  He told me what he observed during my medical emergency at the Orange County Convention Center in Orlando, Florida.  I told him what I had learned from Barbara Jean Garcia on June 17, 2012.  She is the lady who was effective in my revival on June 15, 2011.  Andy's input filled in some gaps in the story I learned from her on June 17, 2012.  Andy saw me turning from blue to normal skin color as my heart beat was restored that day.  He confirmed seeing me sit up and wave my hand and say "Hi" to Barbara Jean.  I was not aware of my situation that day until I became fully conscious later in the ambulance.  The link above goes to the page where I first published my story of my survival. 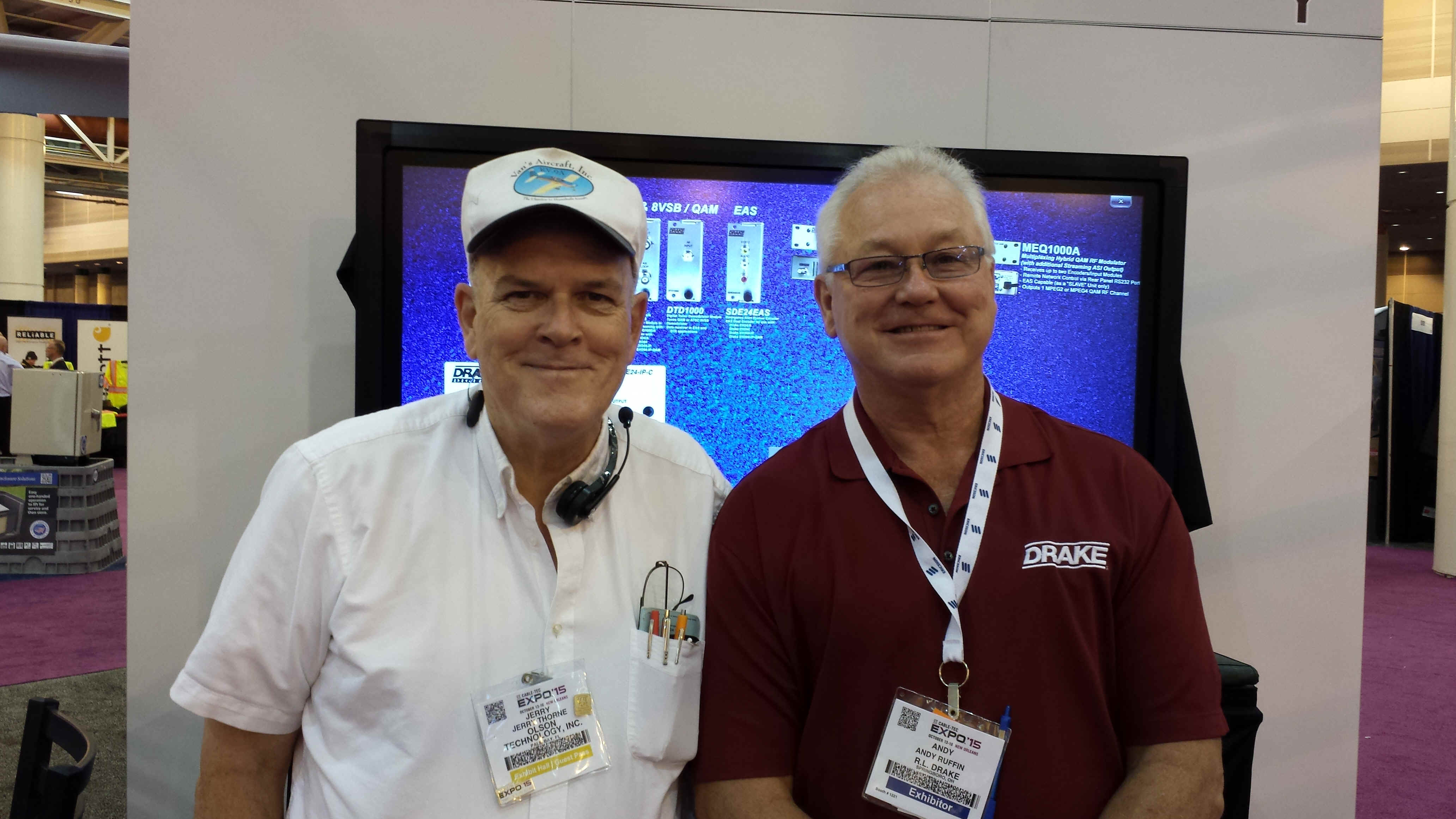 A trade show is all about meeting customers as you can see in this second photo of Andy with a gentleman from Oregon.  When they finished their conversation, the customer turned to me and reminded me I had visited him a few years ago.  We discussed the changes to his CATV system since I had been to his town for our first meeting. 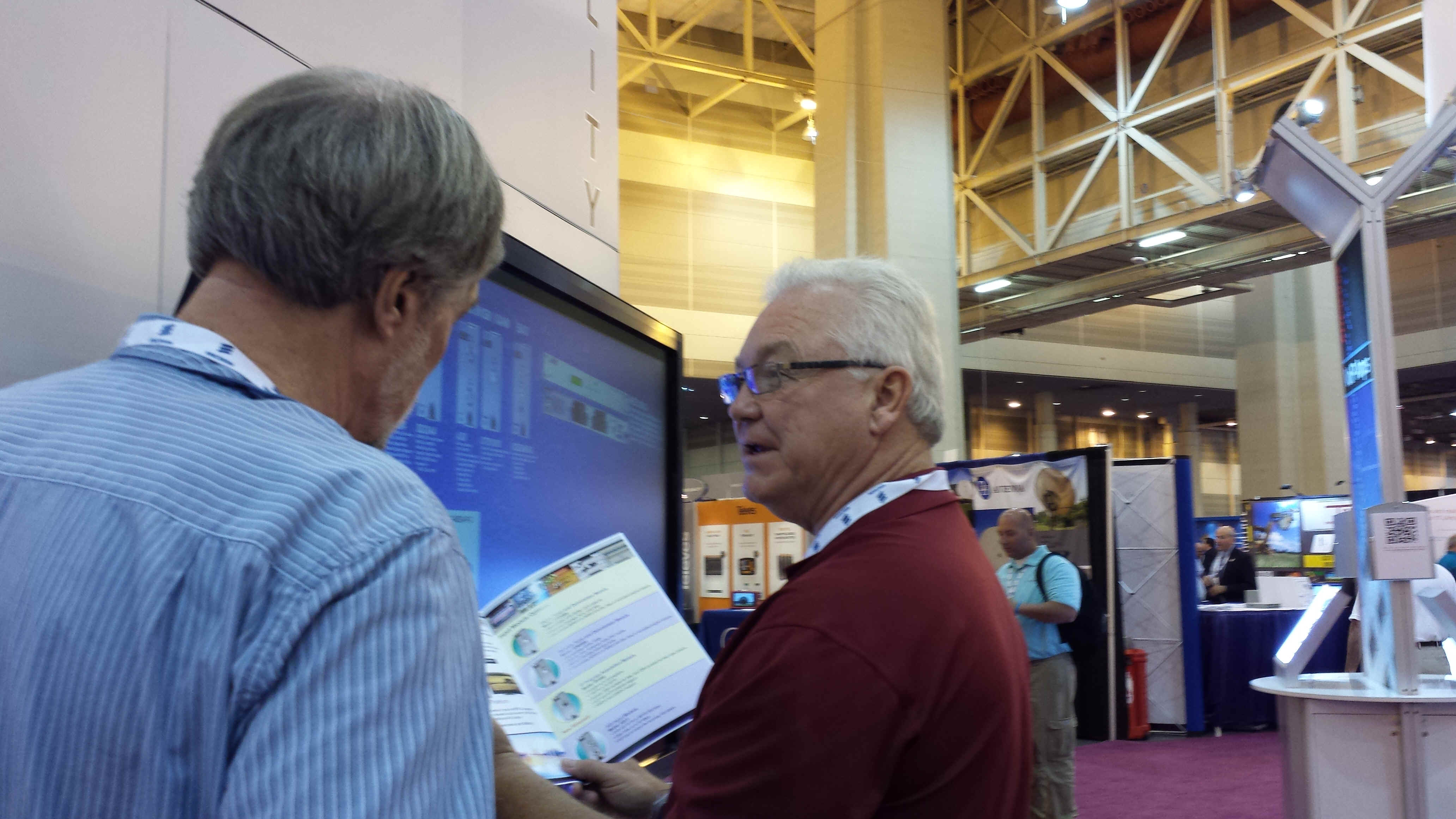 I departed the city at the end of the second day.  There was an NFL game between the New Orleans Saints and the Atlanta Falcons that night and there were no hotel rooms left where I was staying in Gretna, Louisiana.

I stayed at Lafayette, Louisiana that night and stayed at the motel and online doing "some office hours" Friday morning before getting back on the road to Texas.   The traffic in Houston had its problems on Interstate 610 at two locations.  I was able to bypass the first traffic accident but got caught in the construction delay where US 290 begins on the way toward Austin,  My arrival at my son's home in Round Rock was just in time for dinner at a nearby restaurant.

October 17, 2015:  My son took me to a Saturday fly-in for multiple types of radio-controlled flying machines including fixed-wing airplanes, helicopters, and multi-rotor "drones" with real-time TV video systems.  I spent most of my time under a sun shade tent with a couple of pilots who fly these FPV drones (first-person viewers).  These are the type of devices used by the television networks for HDTV low-altitude news coverage.  I saw that type of coverage after the devastating earthquake in Nepal earlier this year.  The NBC reporter on the scene in the capitol of Nepal was closing his report and the drone camera operator moved the unit from a few feet from the reporter back and upwards from the center of the city to show the collapsed buildings all around the reporter's location.

We started the day by walking the flight line for the fixed-wing airplanes.   This is a large-scale model with an engine displacement in the 100 cc range. 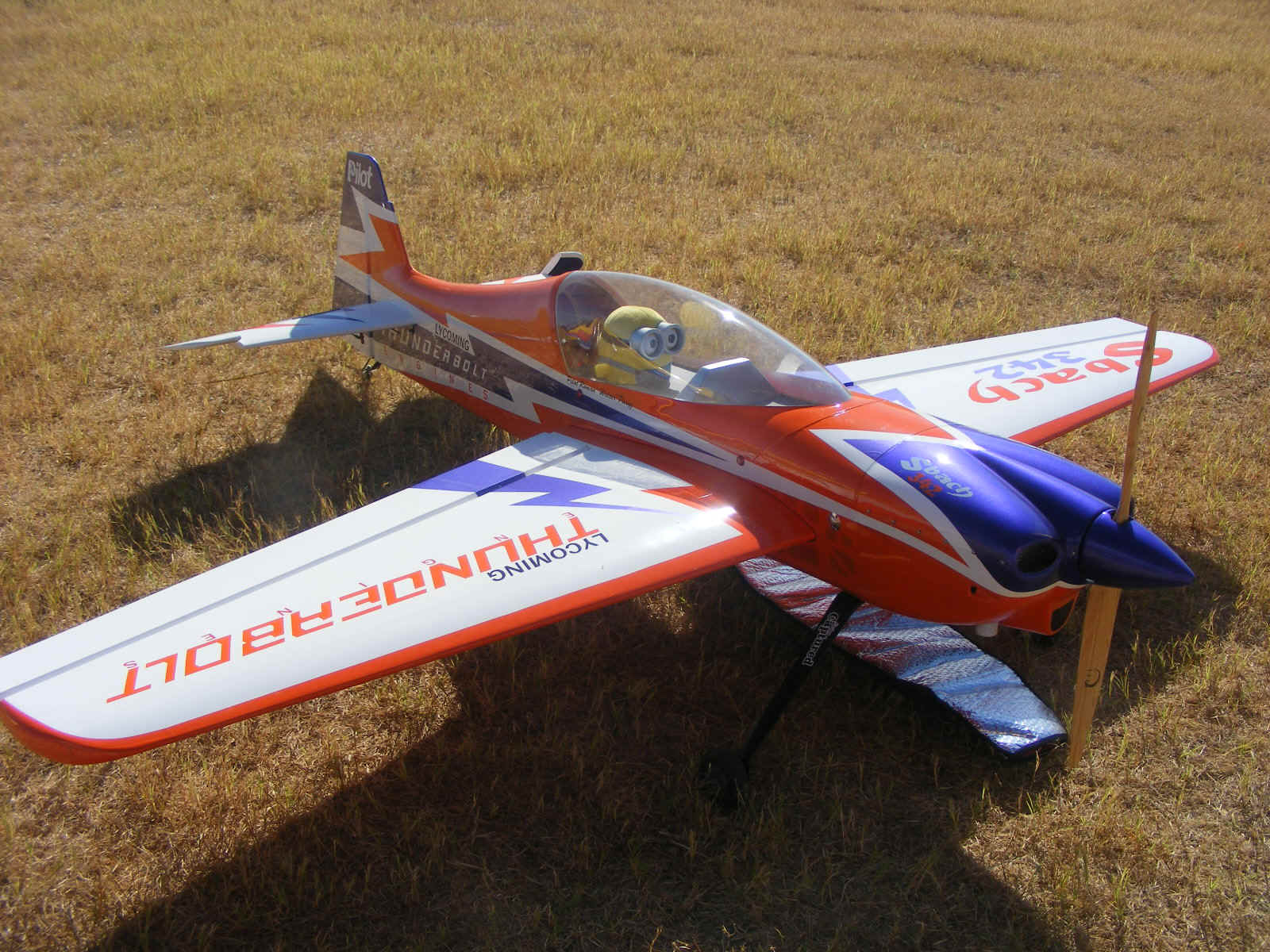 Here is a close-up view of the pilot with my polarizing filter cutting through the reflected glare of the sun. 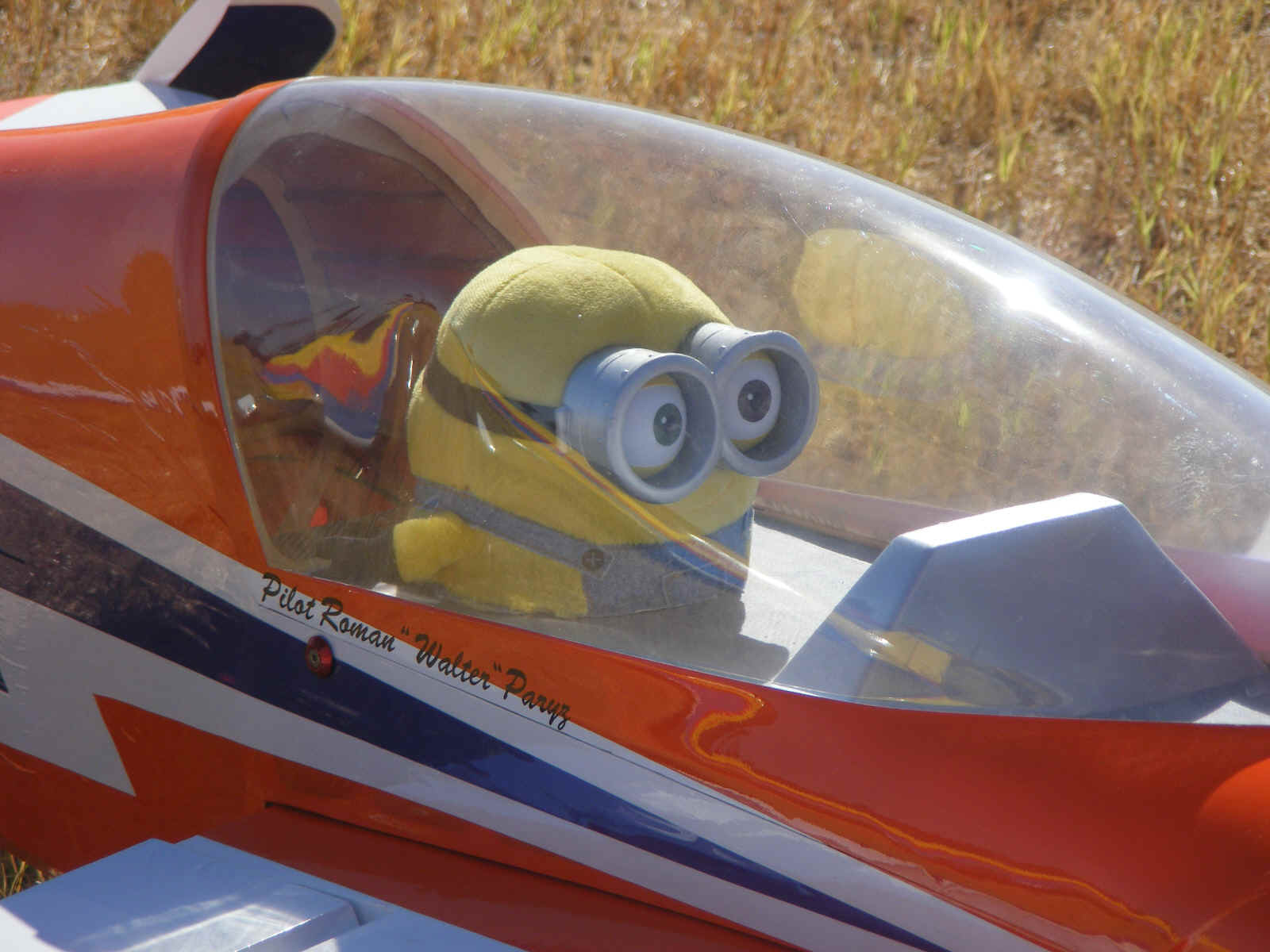 This helicopter pilot was the "best" one on the field at doing aerobatics.  He was so good I could not keep the camera focused on the chopper during his flight.  I was glad I got this shot before engine start.  This model has a gas-powered engine like the models I flew years ago. 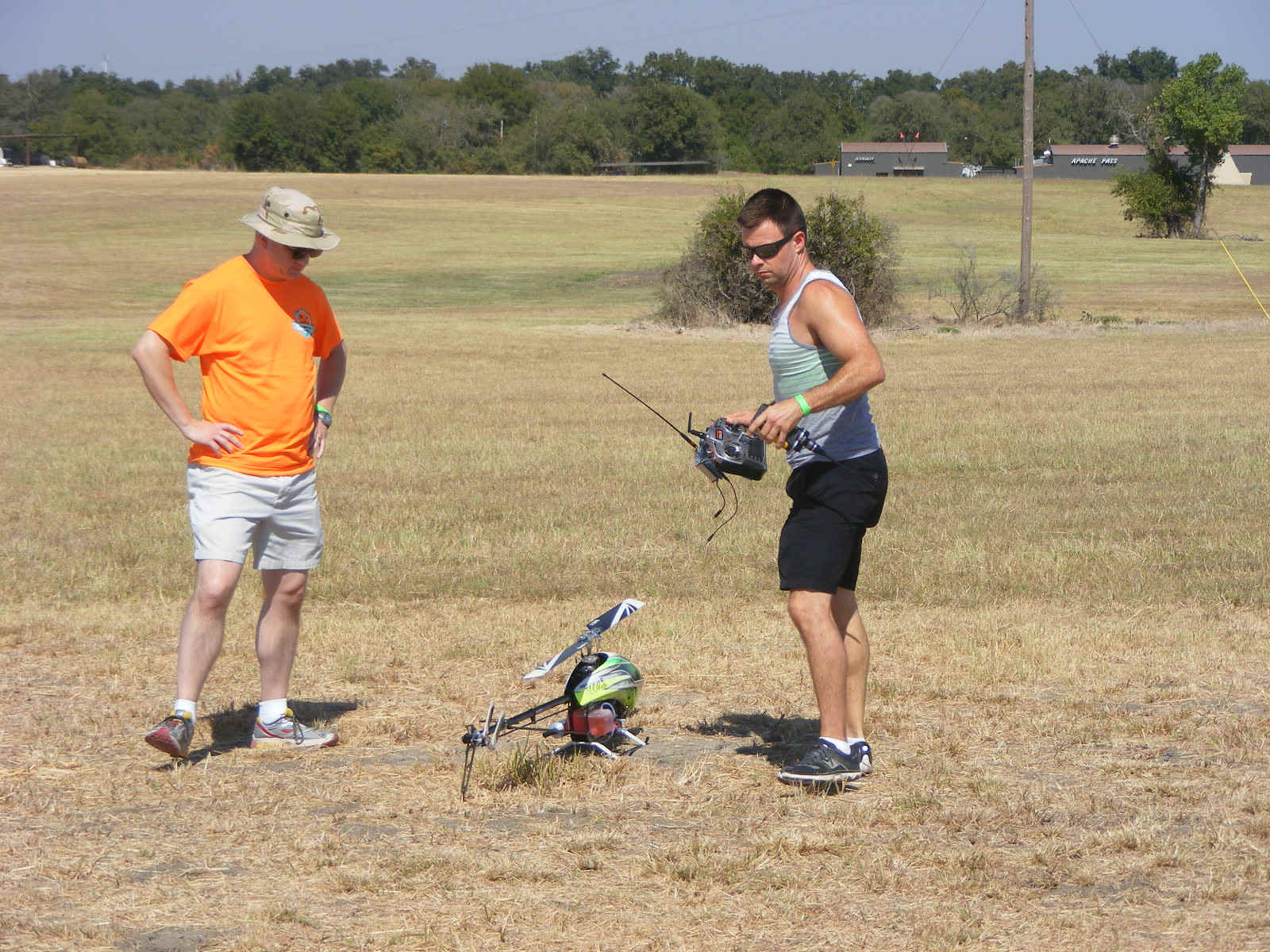 The photo below was just after takeoff as the pilot confirmed all trim settings were correct for hovering. There were many abrupt aerobatic flight maneuvers that began after I took this photo.  I realized I would not get any usable photos for this web page.  I should have taken a movie. 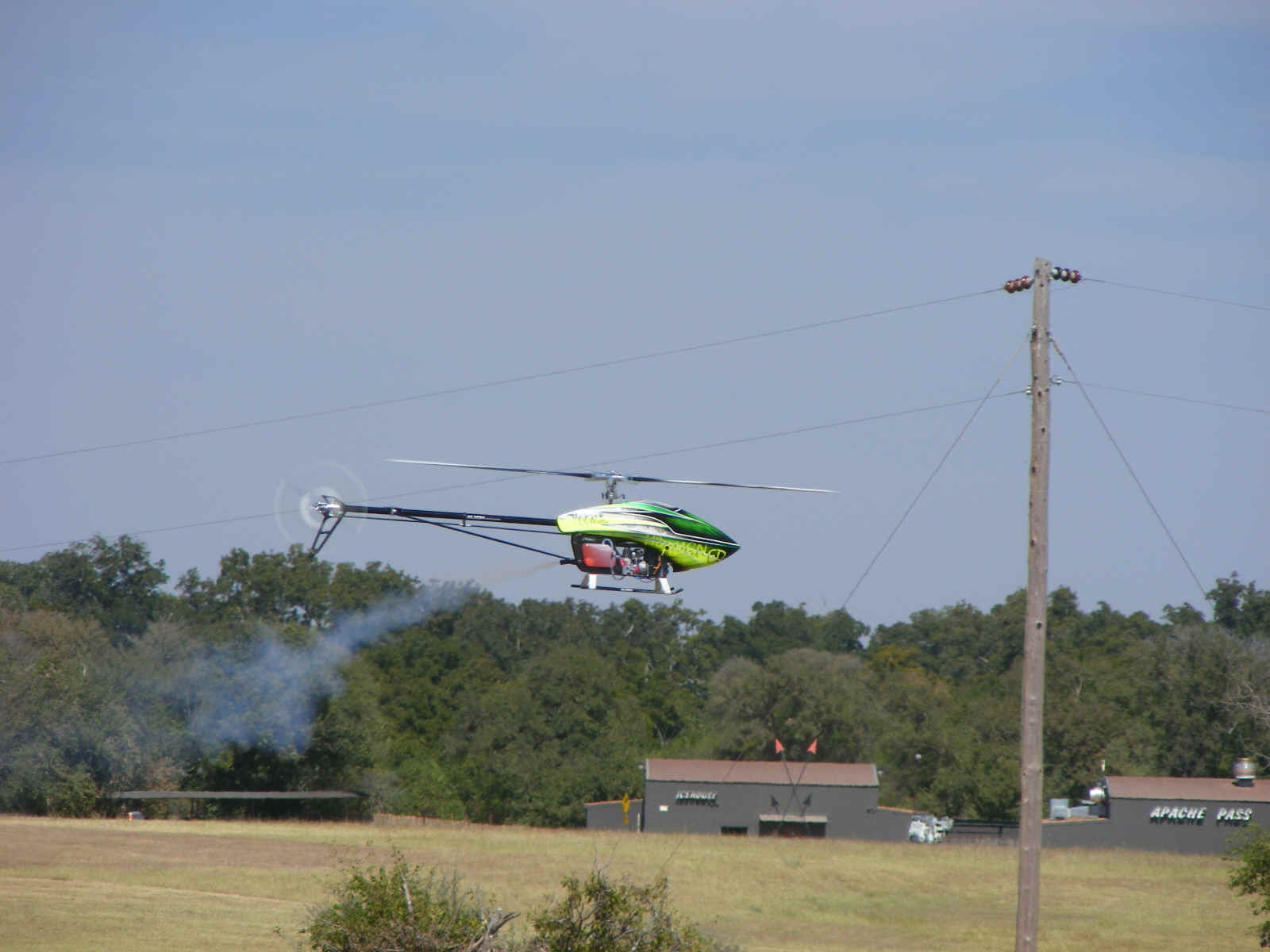 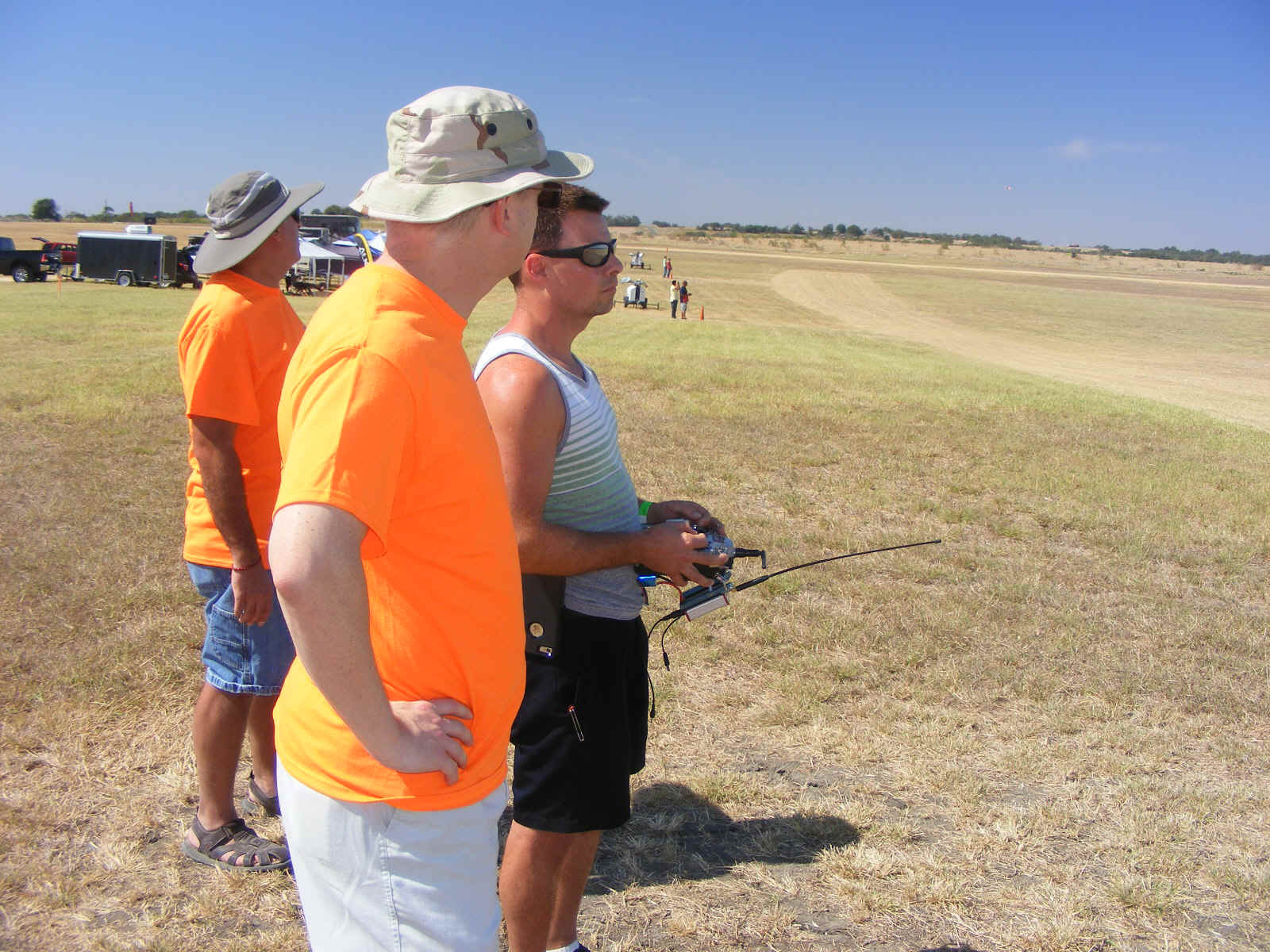 We spent most of the day sitting in the shade with the quad-copter flyers, also known a FPV pilots.  The FPV stands for first-person viewers since these are the camera drones you hear about on television news stories when they get too close to airliners on approach to airports.  These pilots were following all the FAA rules remaining below 400 feet above ground and more than FIVE miles from the nearest commercial airport.  The model seen here has DUAL GPS receivers, a high-definition camera on a tilt-pan-zoom mount under the frame, and is programmed to remain stationary when there are no control inputs from the pilot.  The radio control receiver has dual antennas to improve signal quality. 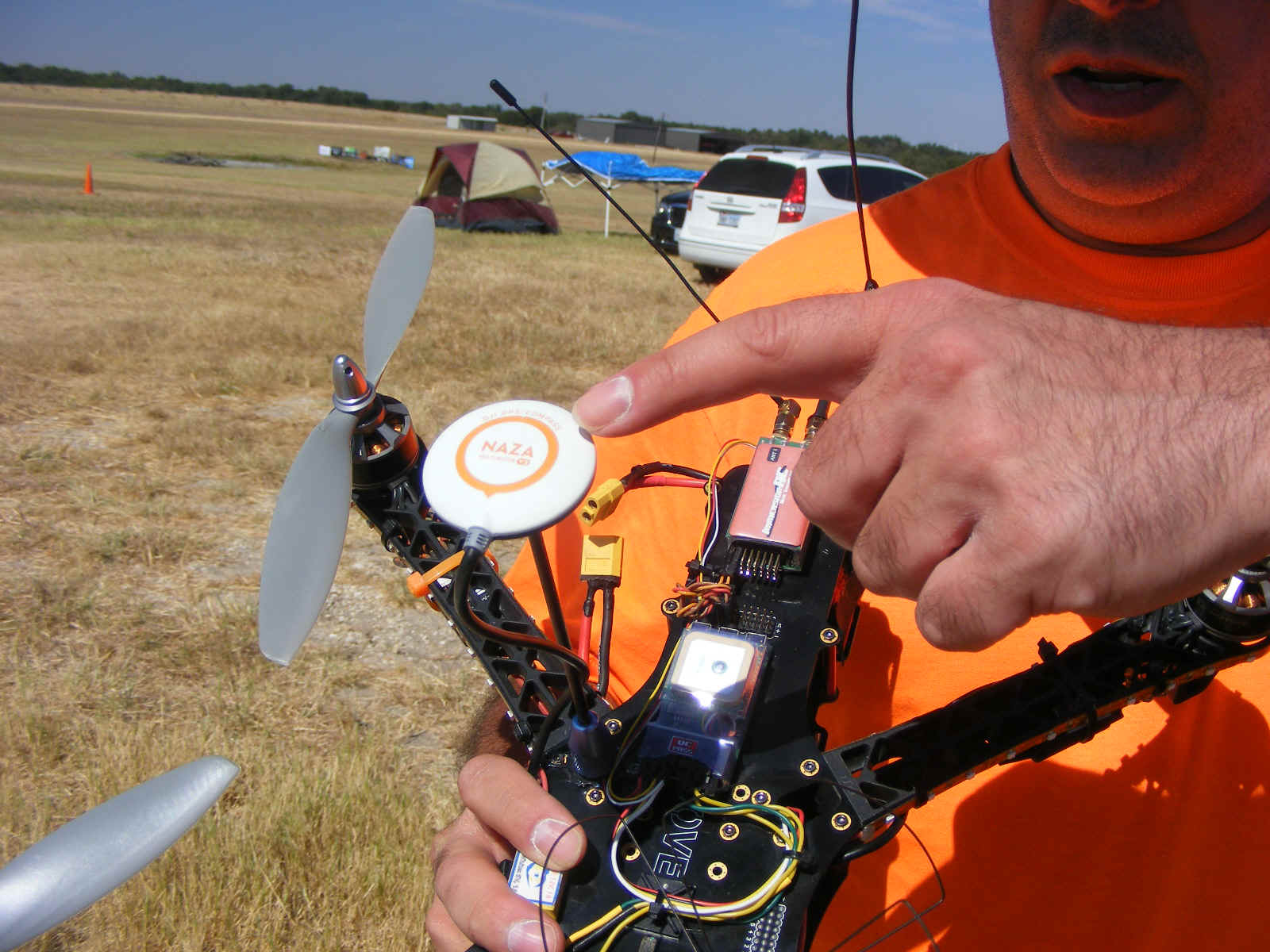 The digital HD camera is connected to a transmitter to send real-time television images to the pilot at all times.  The round series of bent wires from the black and white "post" is circular-polarized Omni-directional antenna transmitting the TV signals to the ground.  If the model has a loss of the radio control signal, it is programmed to stop, hover, then return to the point where it took off on the current flight and land by itself.  That requires an on-board computer which has a cooling fan over it which you can see at the base of the circular-polarized antenna. 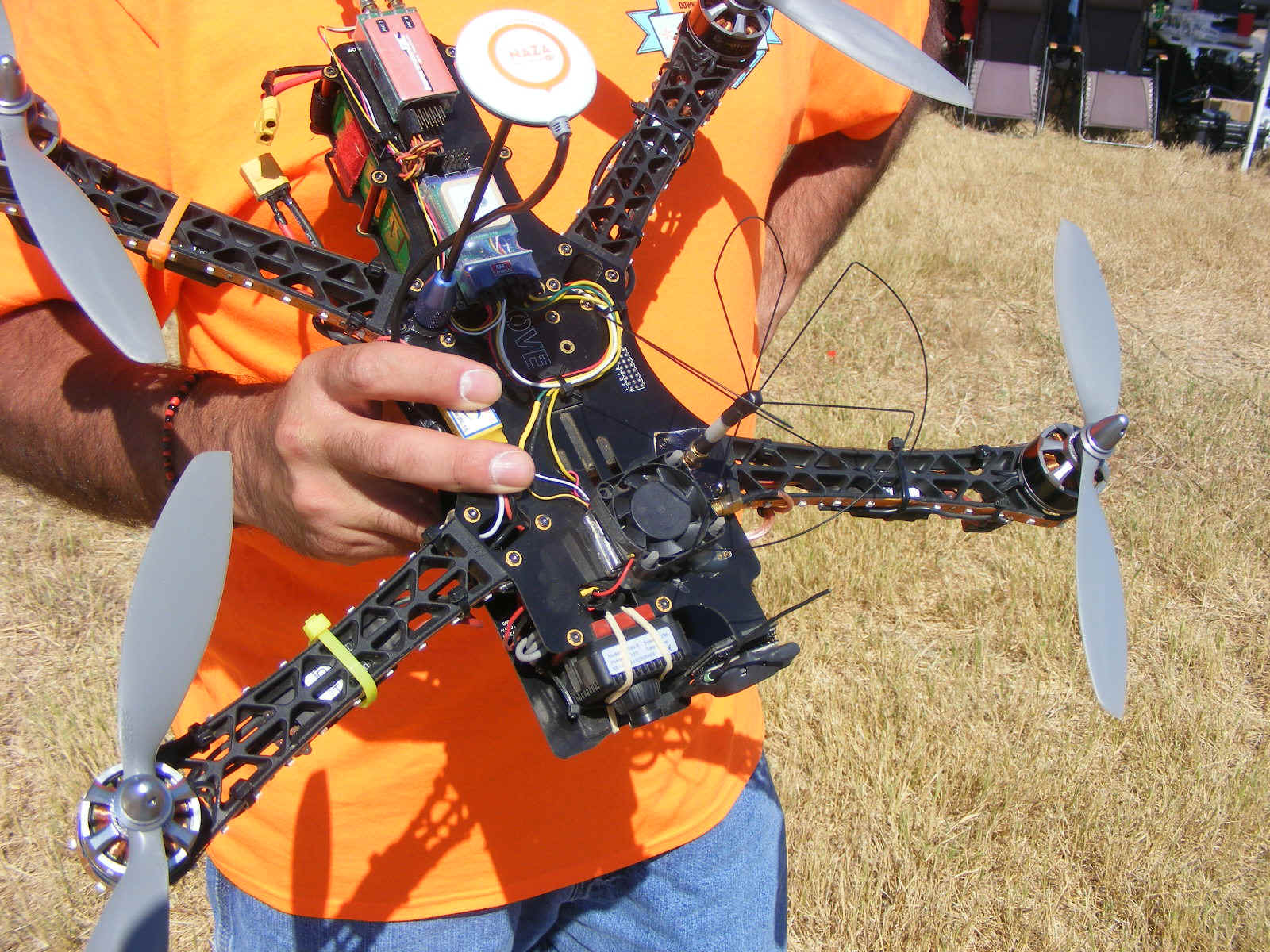 Here are two antennas on the ground for receiving the television signals.   The one at the top is the same type of circular-polarized Omni-directional antenna that is mounted on the FPV drone.  The large flat plate with the "X" antennas is a directional antenna with more gain, but less coverage area in ONE direction only.  This antenna provides more TV signal range out in front of the antenna array. 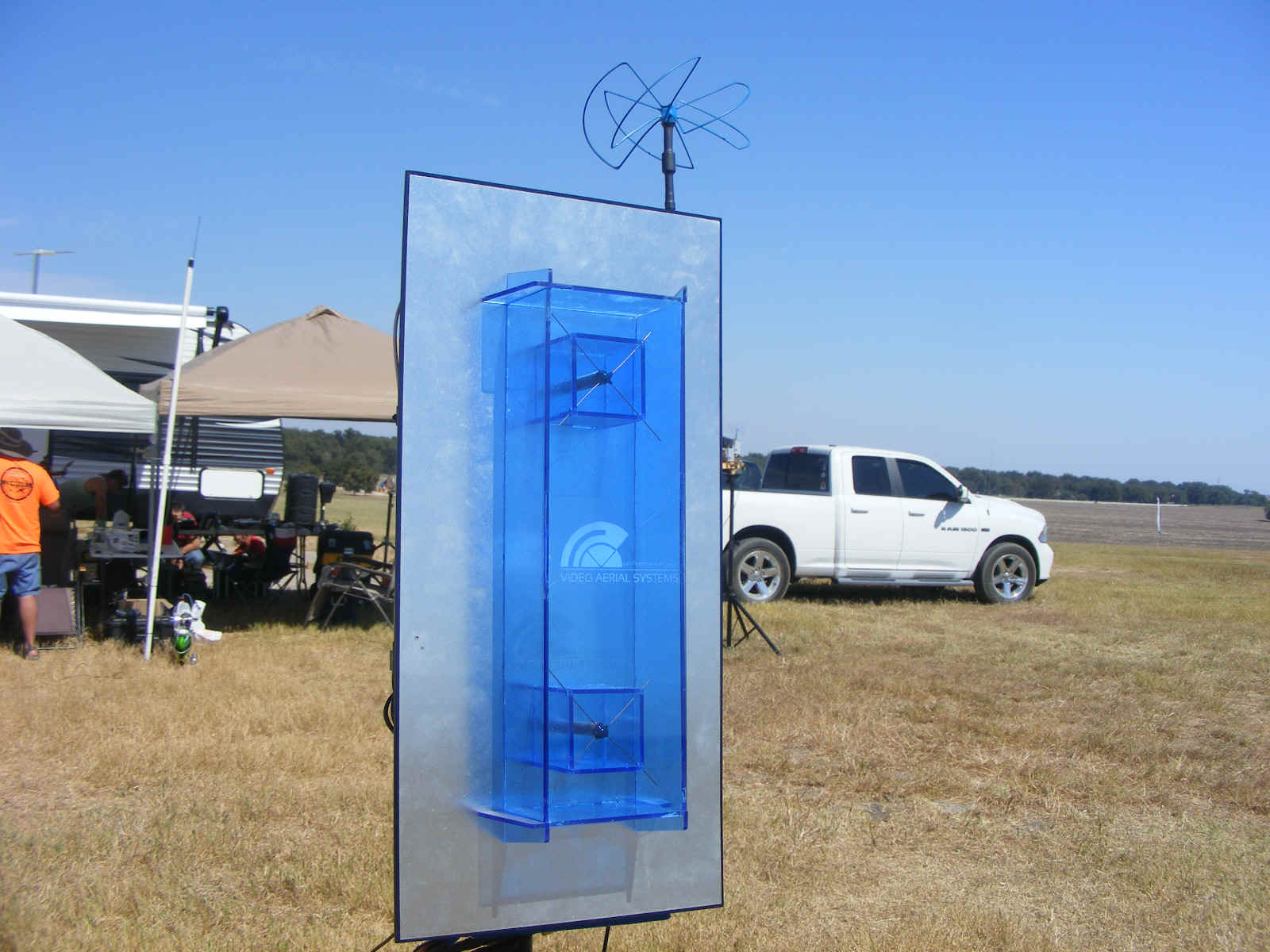 On the back of the antenna there are two receivers, one of each type of antenna.  The output of the receivers is sent to a smart switch that will select the strongest signal for display on a television monitor or a pair of virtual reality goggles with dual miniature TV displays.  A large rechargeable battery operates everything seen here. 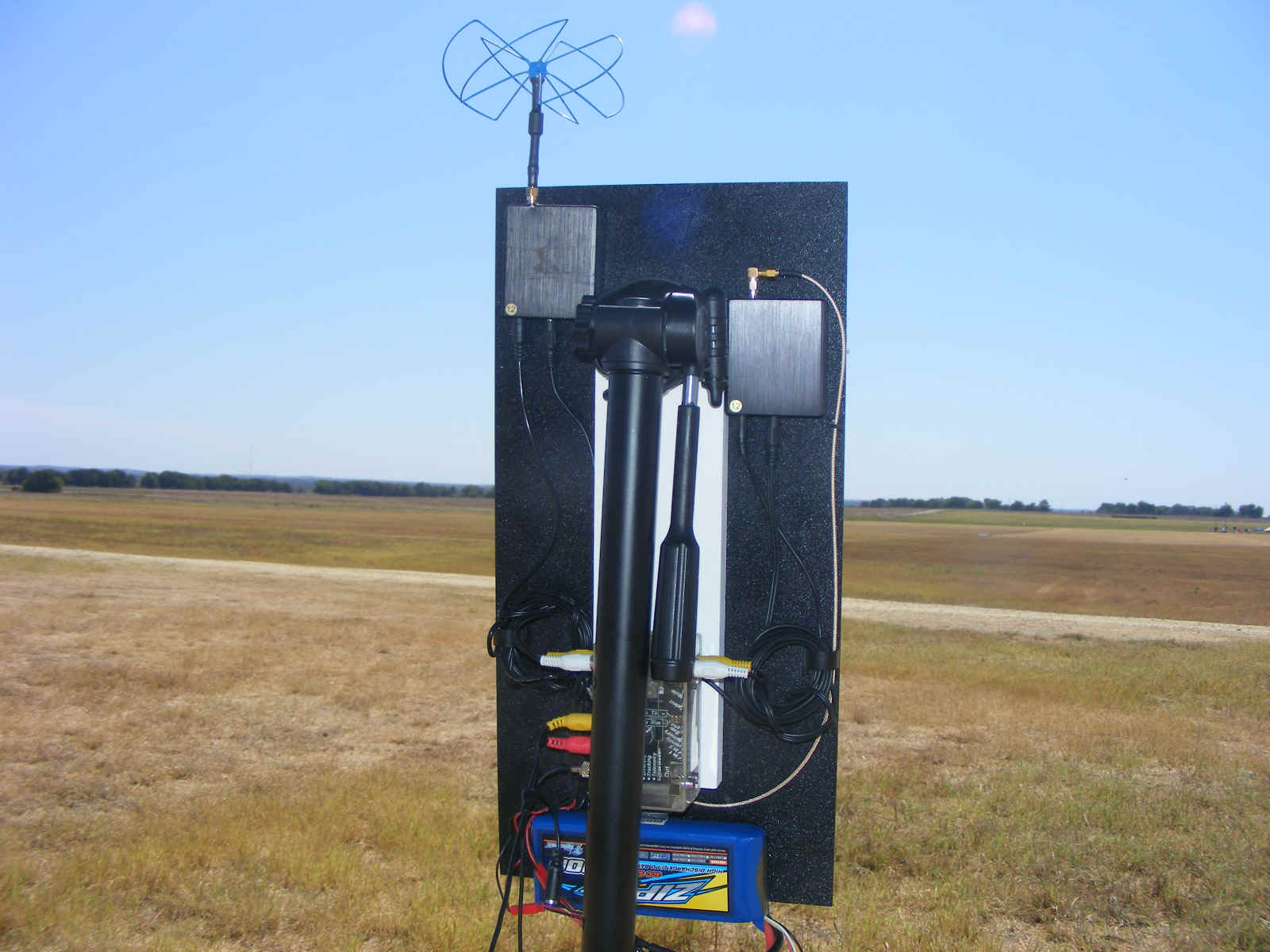 My son Edward got out his electric helicopter and flew it on the chopper flight line. 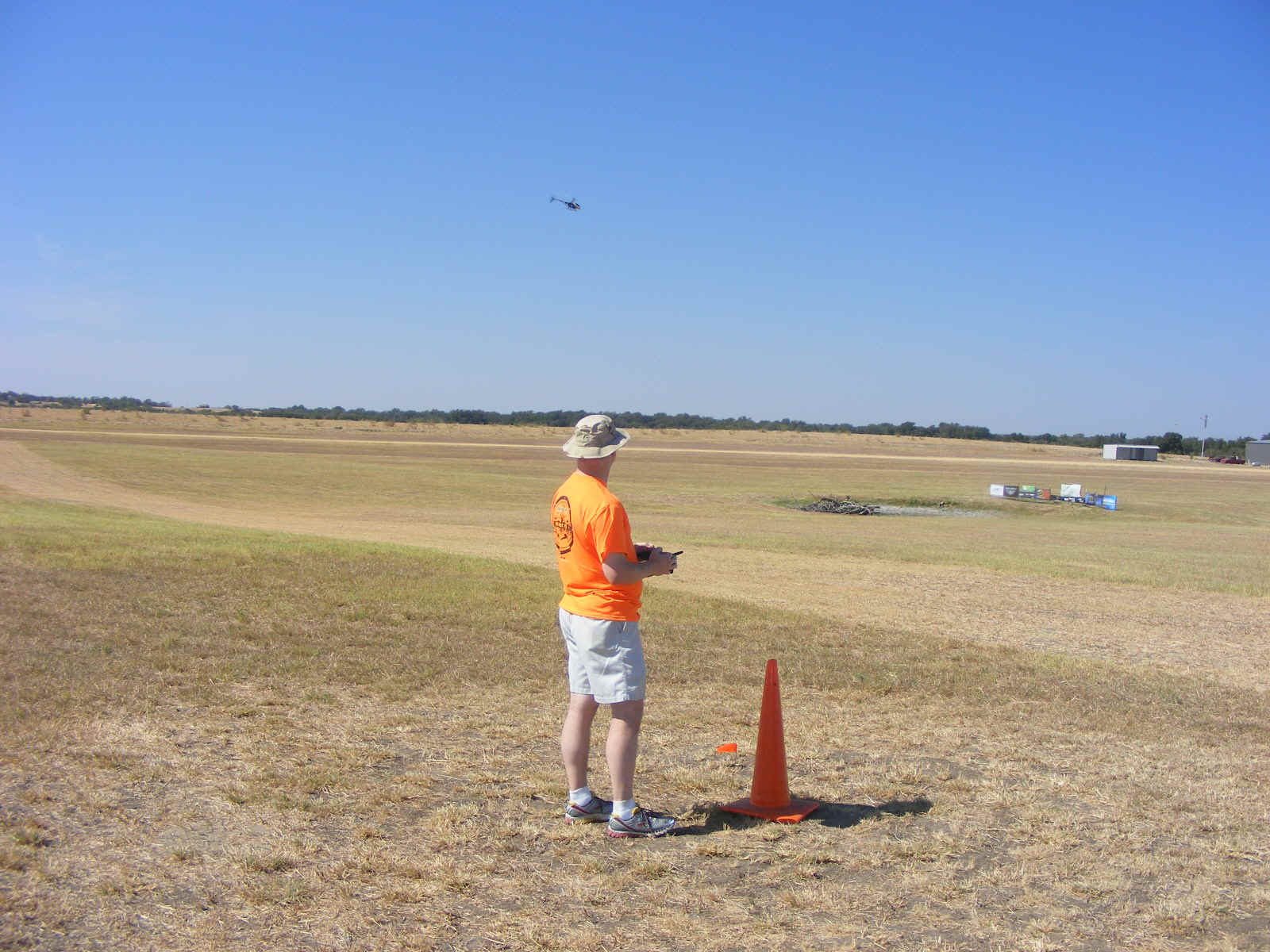 His skill levels cover stabilized flight in all directions, meaning he "keeps his head inside the model" when it is flying toward him. 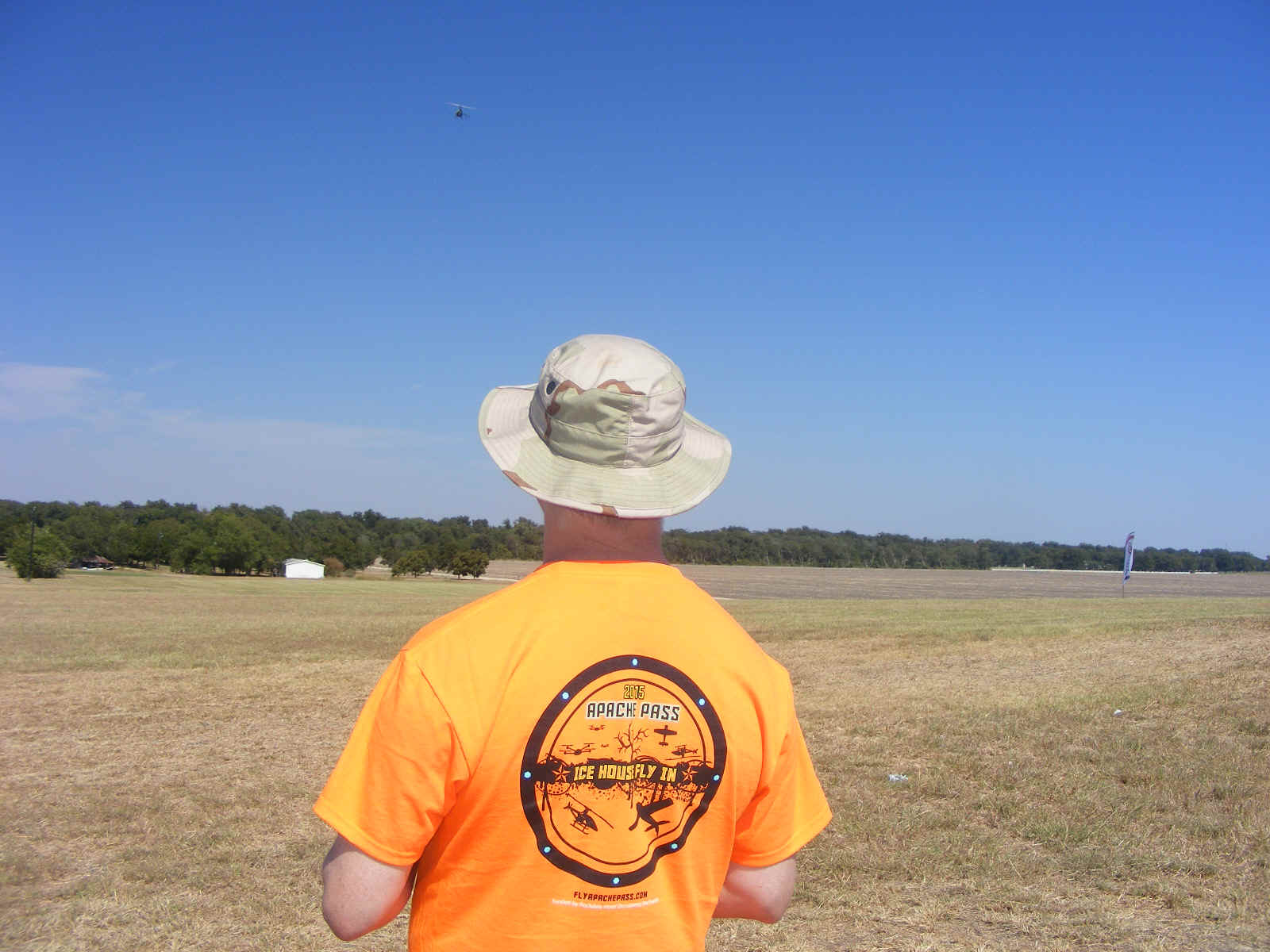 Fixed-wing airplane models were flying south of the helicopter and FPV flight line as seen in the next two photos.. 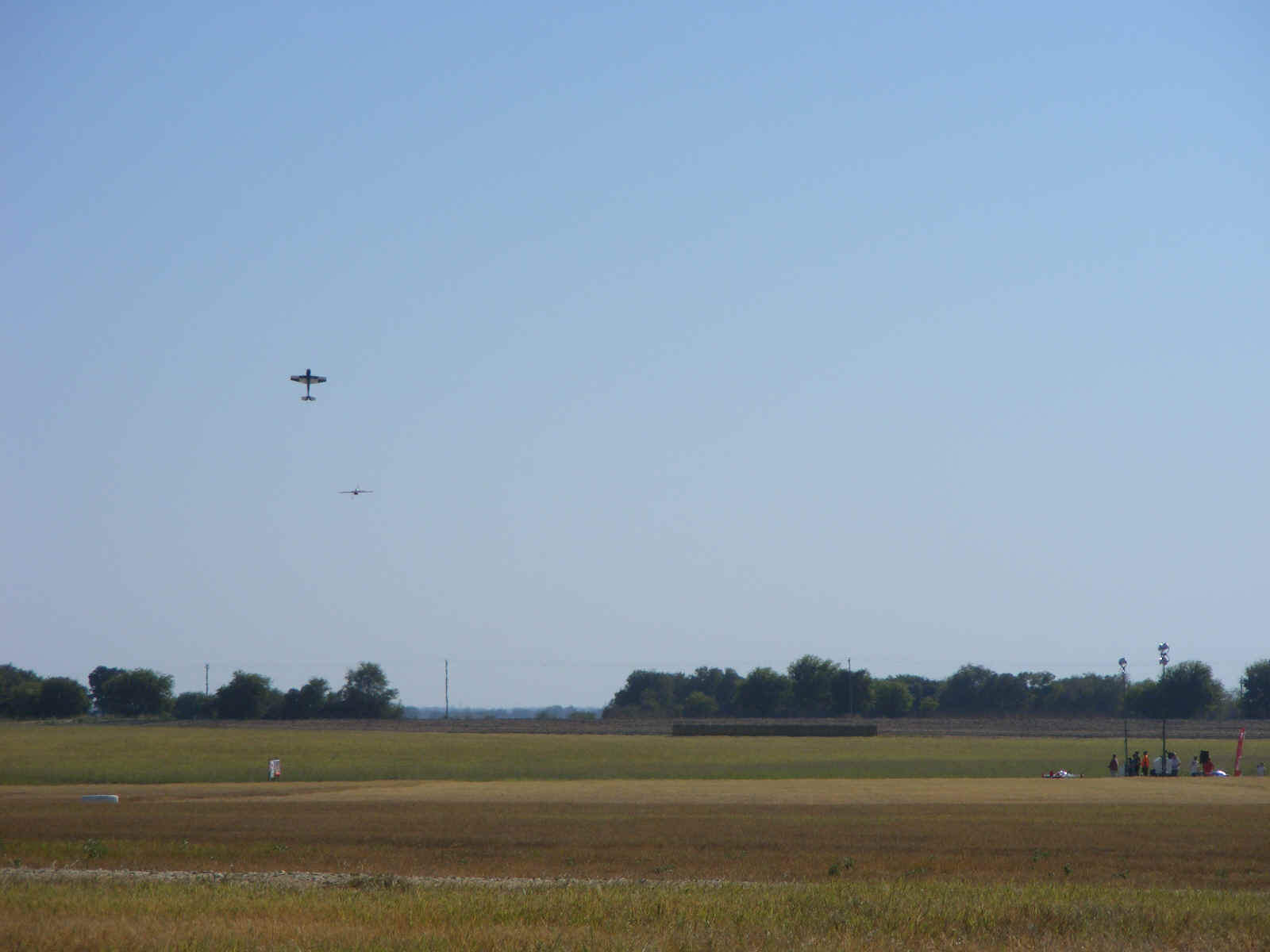 This wider shot shows the relative distance from the FPV site. 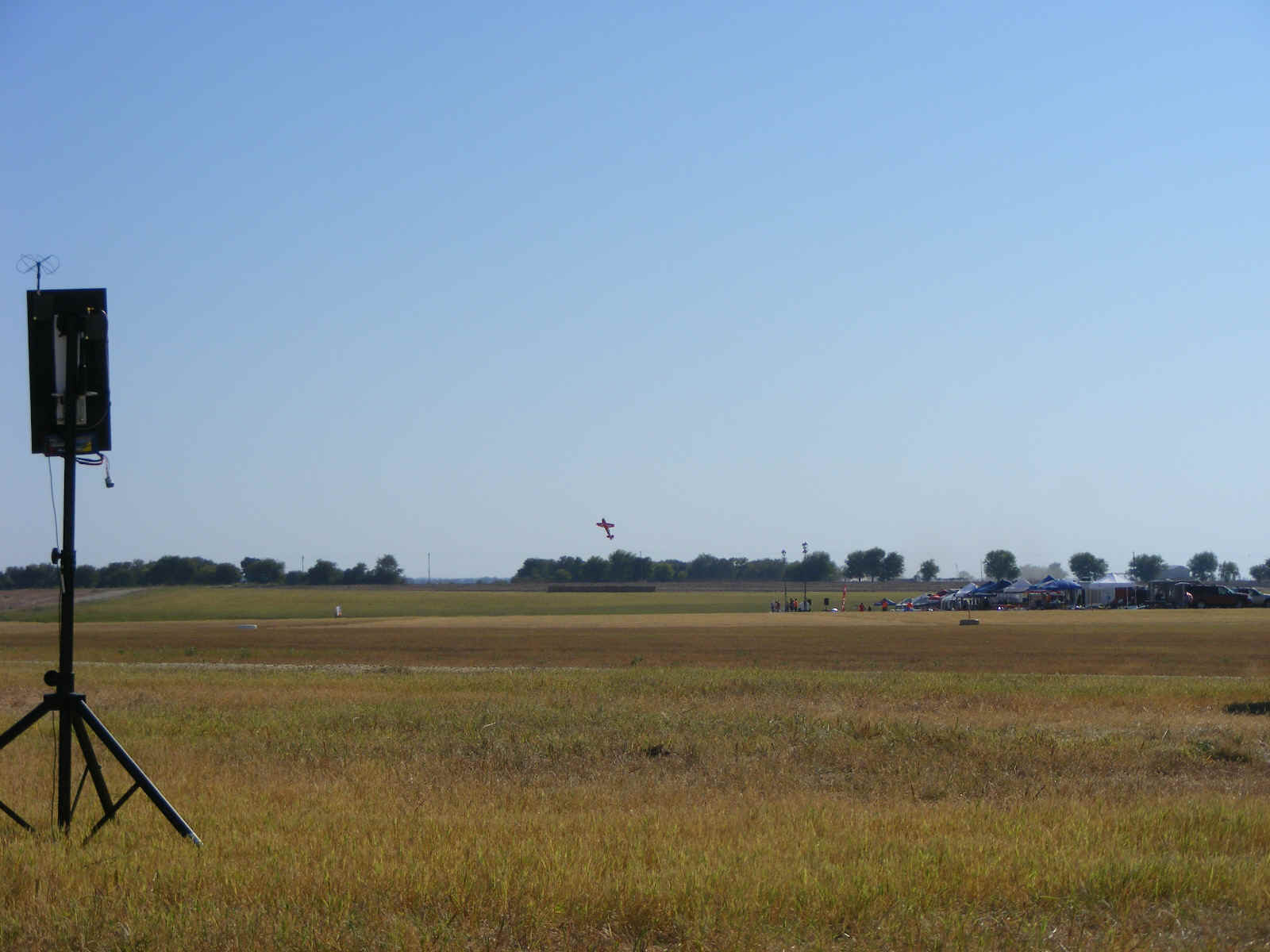 We went down to the fixed wing flight line where there would be raffle tickets drawn at 5 PM for prizes.  The best of the prizes is large helicopter kit.  The pilot of this airplane is transitioning from forward flight to vertical attitude where the airplane will be "hanging on the prop" like a helicopter. 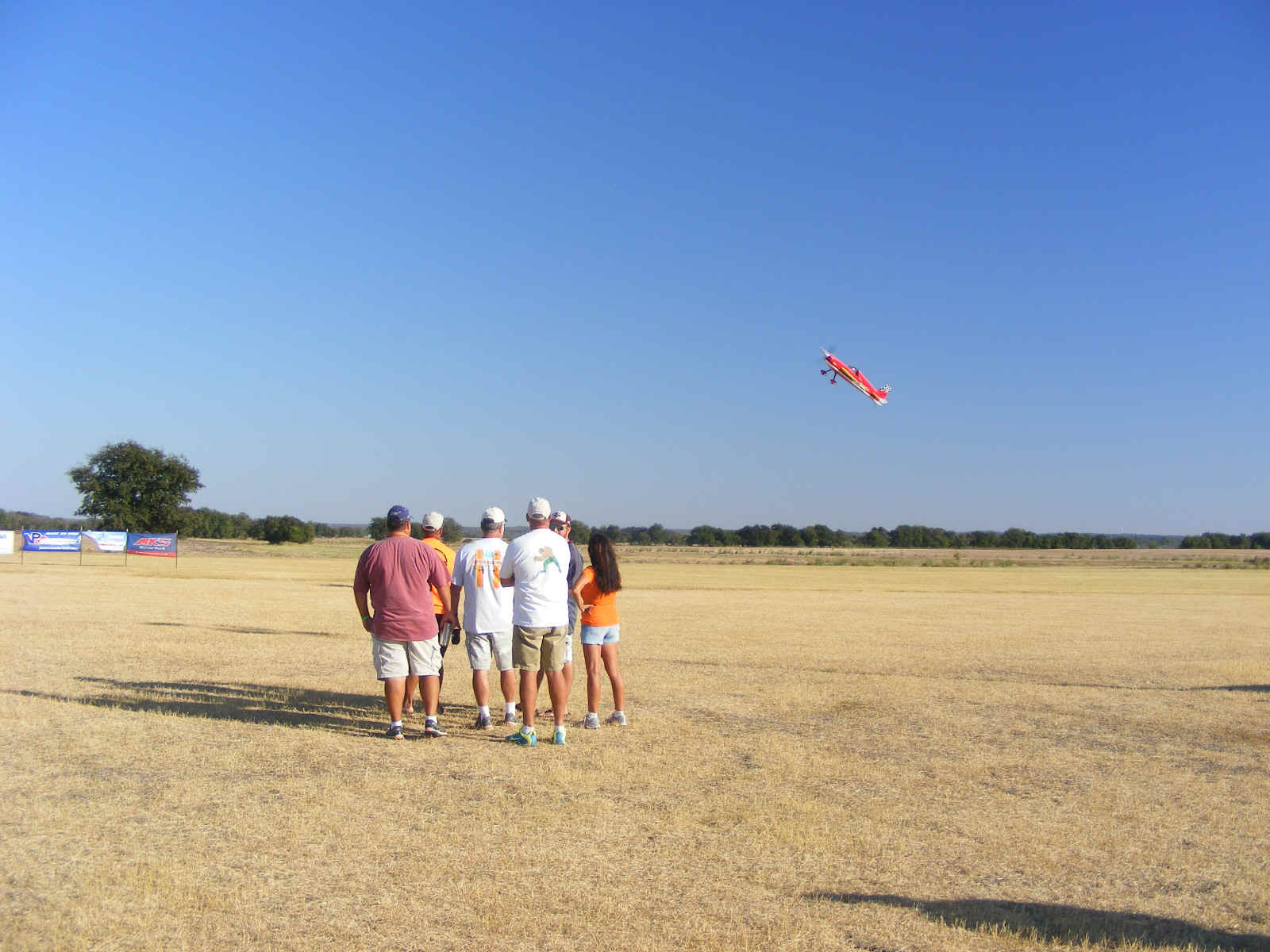 Here he has the airplane in a stable, almost vertical orientation with the nose pointed into the wind to compensate for the wind coming across the airfield. 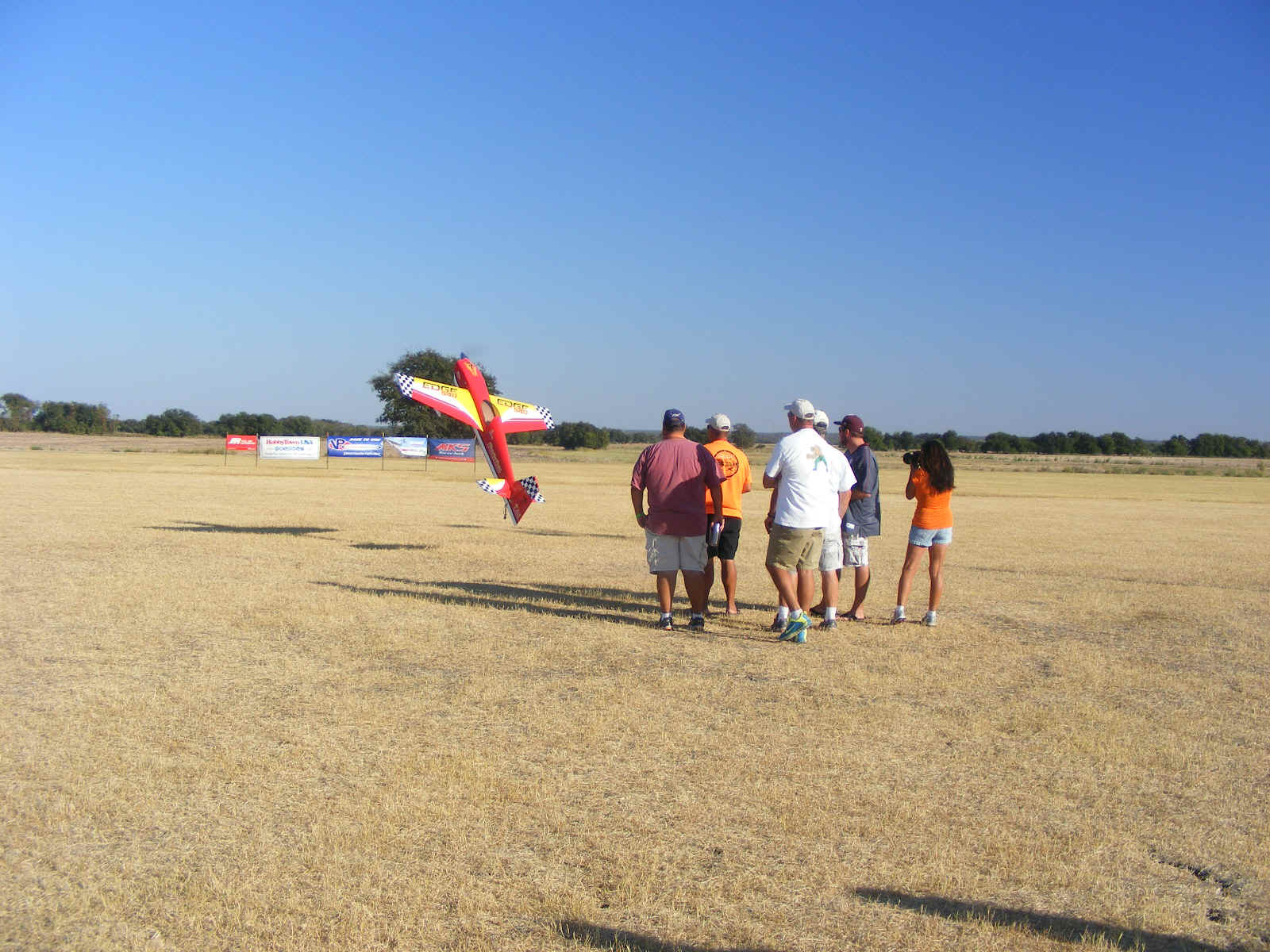 After completing the hover maneuver, the pilot adds power and down elevator to transition back to normal forward flight. 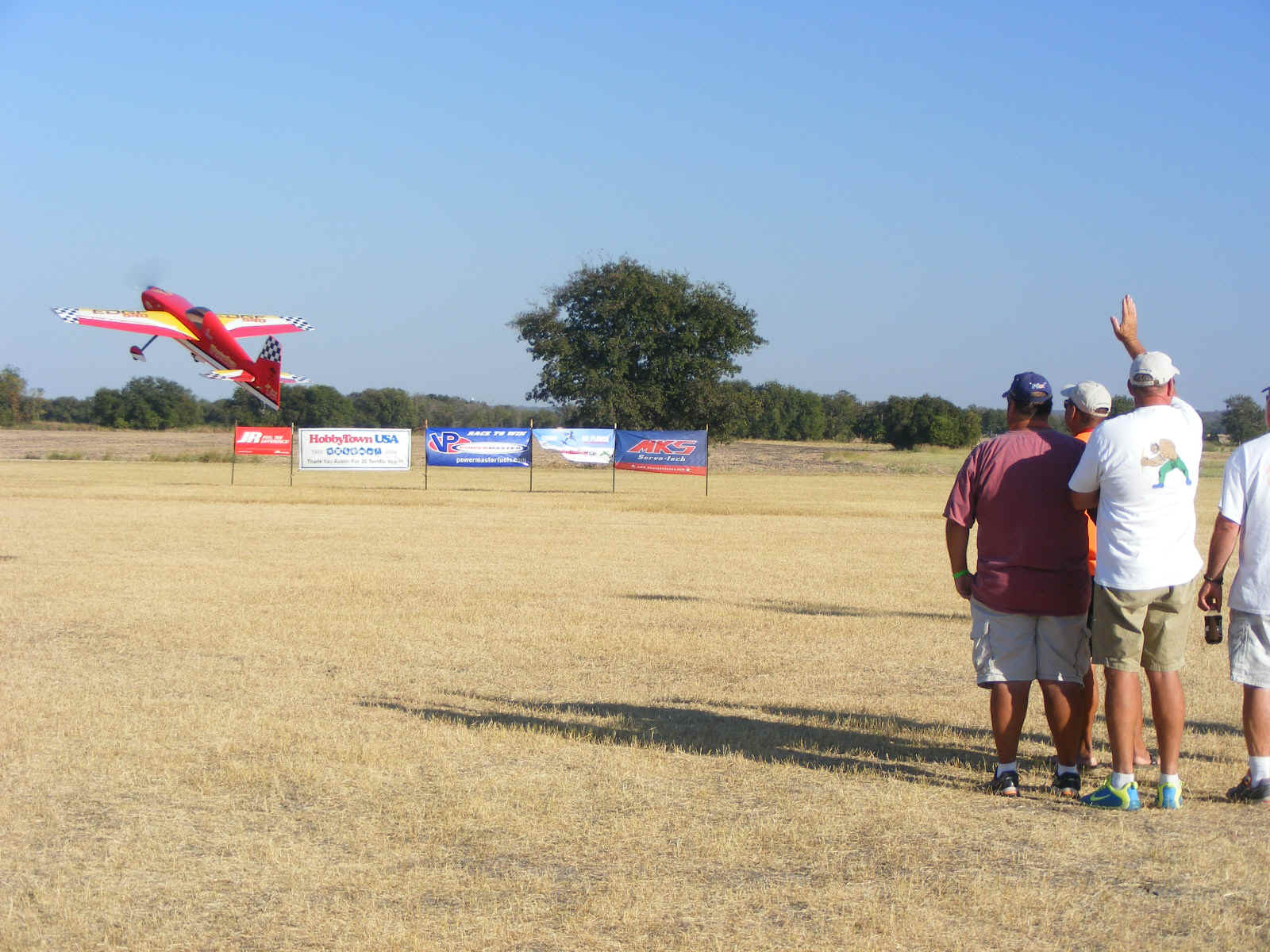 At the end of the raffle drawing, we headed for home with a stop at a barbecue restaurant on US 79 near Round Rock, TX.