February 4, 2016:  My wife fell this Thursday morning and broke her arm near the right shoulder.  No details here, but she was in good hands.  The Thursday evening surgery to repair it had a problem and she was transferred from the Palm Bay Hospital to Holmes Regional Medical Center in Melbourne to get specialized care due to the nature of her break.  She spent Thursday night in surgical ICU.  There was no chance of getting the surgery completed on Friday and she was kept comfortable until Monday when a very experienced orthopedic doctor would take over her case.  A CAT SCAN on Monday created the roadmap of how to repair the shoulder joint and the surgery took place on Tuesday afternoon, February 9, 2016.   She was released from the hospital on Friday, February 12.  She is getting better at home and had a steak for lunch today (Sunday, February 21).  Her arm has been in a sling continuously since the initial break.  We get a post-operative visit with the orthopedic staff on February 25, 2016.  New X-ray images will be made and the next steps for rehab exercises will begin.

The hard part of her rehab at home for now is getting some sleep in a comfortable position that does no harm to the healing arm.  I help in all things as needed.  She has become more independent in the past few days and that is a good thing!  More info later this coming week.

March 12, 2016: Editor's note and date of publishing to correct this web site.  As you can see above and more below, my focus has not been about flying lately or keeping up this web site.  I have updated PAGE 400 to put in a flight up to the Palatka Airport on January 30, 2016 plus adding to THIS PAGE, which was previously numbered as page 400.

February 11, 2016:  A few weeks have passed since my last entry dated January 16.  I have been playing handy man around the house.  The dishwasher needed a new control panel.  I ordered it from Sears Parts Direct on January 31, 2016 and it arrived a few days later.  I got it installed and dishwashing by hand is no longer required.  The new control panel is installed and working.   The old one is sitting above the counter showing the inside and the ribbon cable that connects to the main control board in the door.  The stain at the steam vent on the right side hints at the damage to the tactile switch board hiding behind the white flexible push button panel seen on the front of the door below the kitchen counter.   Corrosion of the tactile key contacts put this one out of commission.  It only took about 15 minutes to install the new panel and get the machine working normally again. 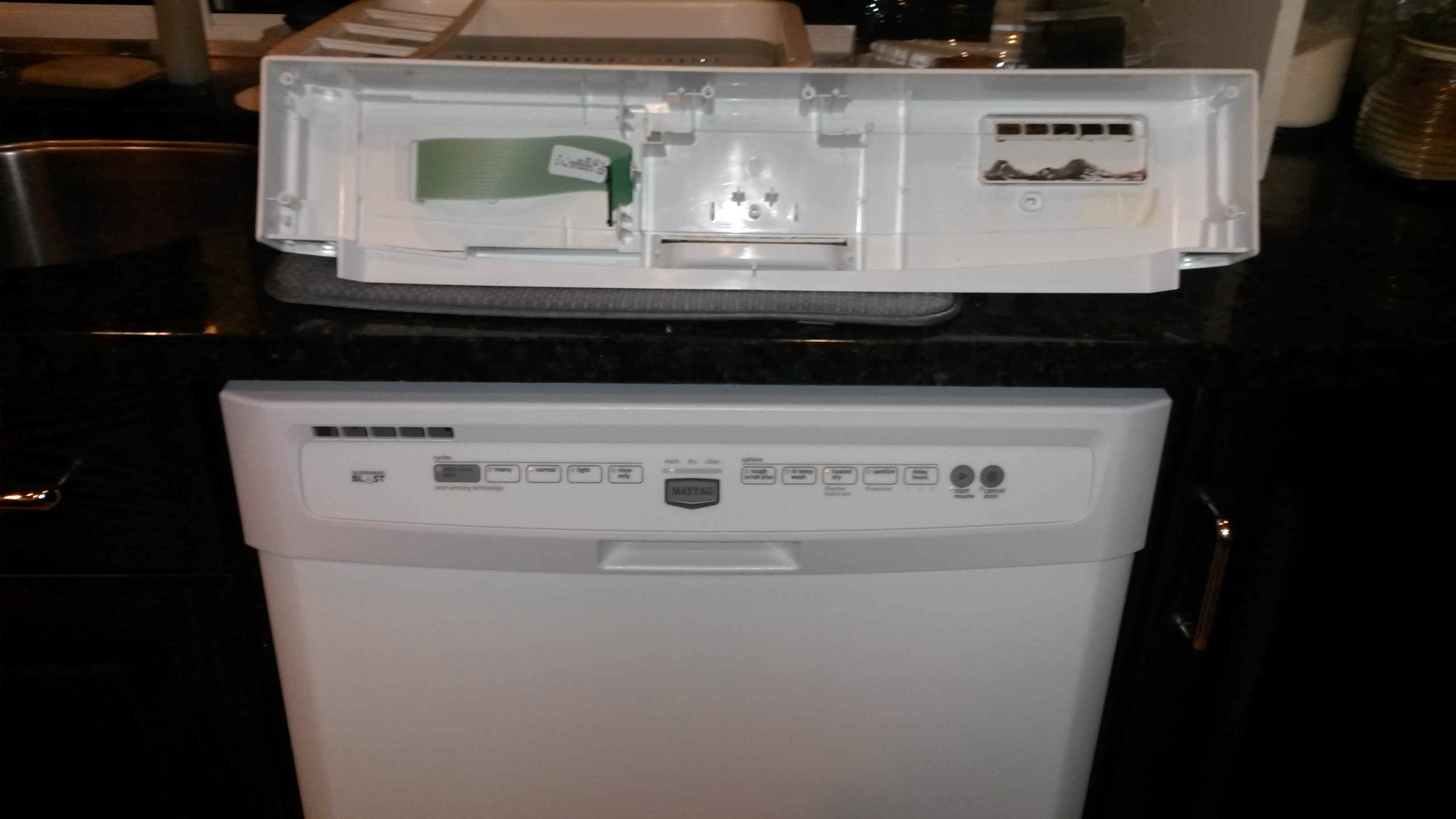 February 28, 2016:  The meeting last Thursday with the orthopedic folks went well.  The post operative X-ray showed everything normal for my wife's shoulder.  We had a chance to see the first X-ray of the original damage, and the cat scan from before the reconstructive surgery.  My wife has a better outlook after learning about some of the next steps to recovery through physical therapy.  We had the first therapy session on Friday to begin the process toward a normal life again.  She has learned to do a lot with her left hand as her strength and range of motion for the right arm is limited at this time.

March 5, 2016:  Saturday is sometimes for flying, and this one is also the first day of early voting for the Presidential primary in Florida.  The polling place near my home was backed up so I went flying first.  It was a hazy day but still VFR as seen after takeoff from Rockledge Airport as I head down the Indian River just after takeoff. 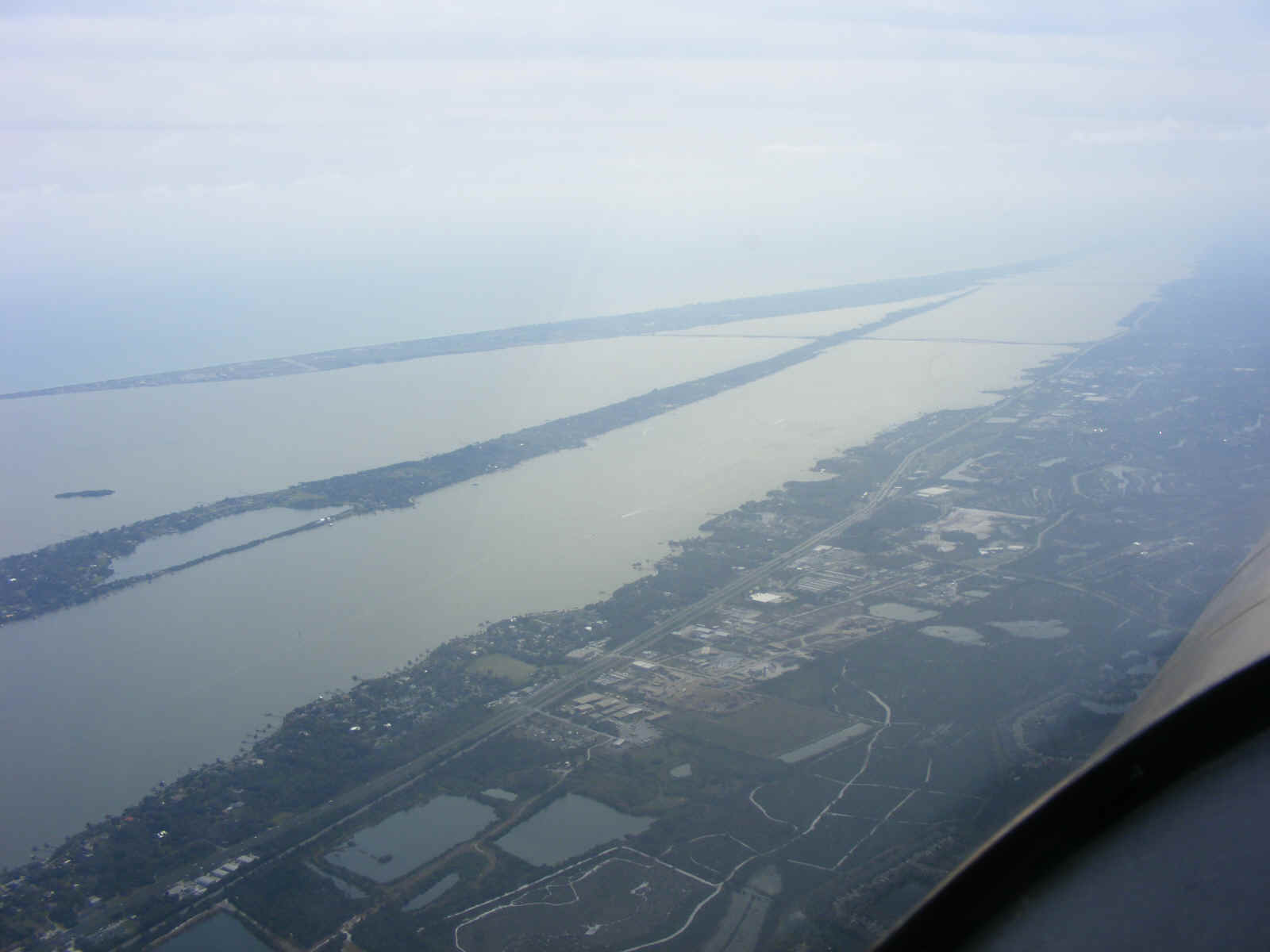 I turned inland a bit and climbed up high enough to stay out of the Class D airspace of Patrick AFB seen here on the barrier island. 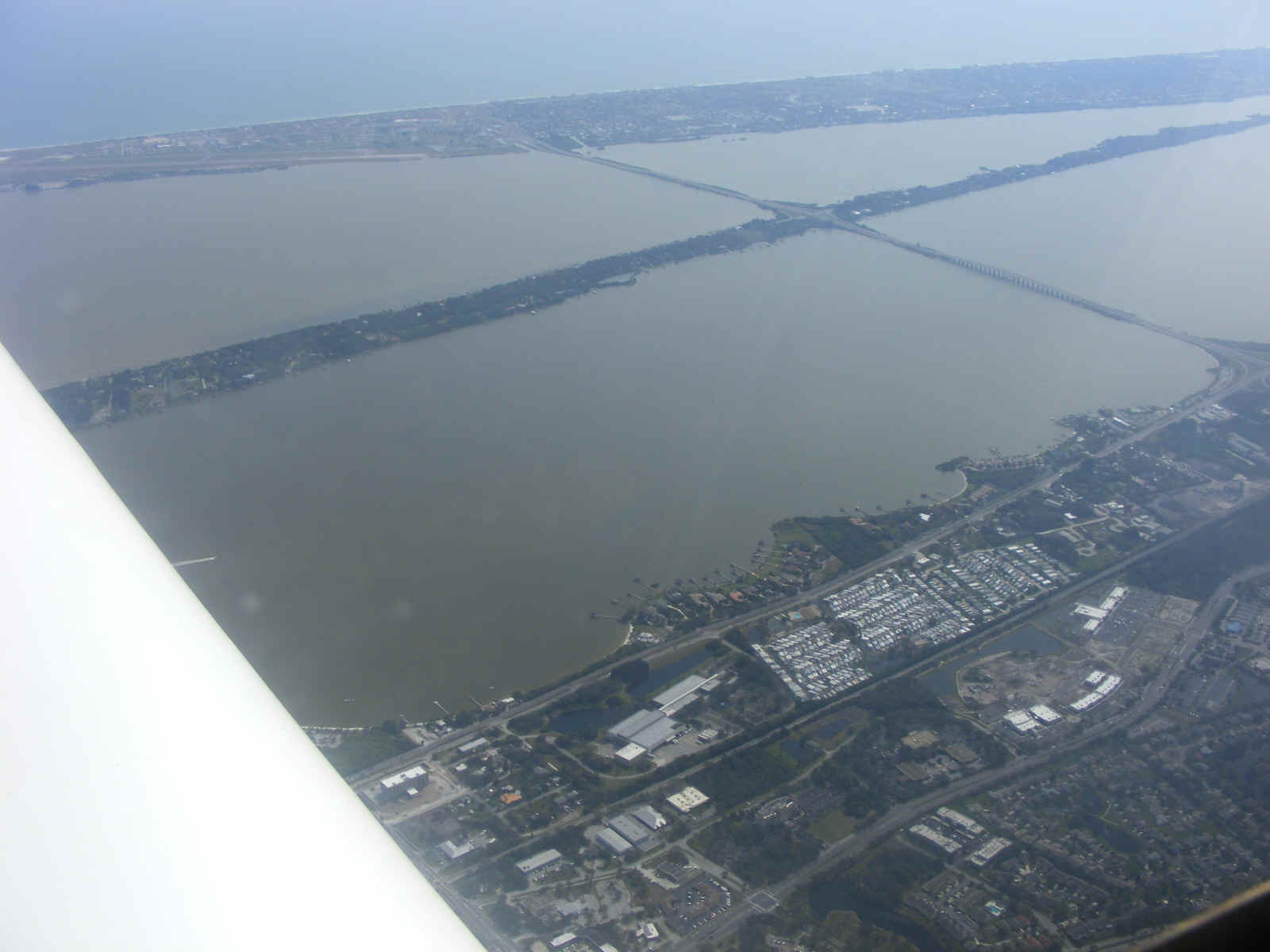 The weather south of Melbourne was not good.  I turned back north and flew up over Titusville to check my localizer and glide slope receiver. 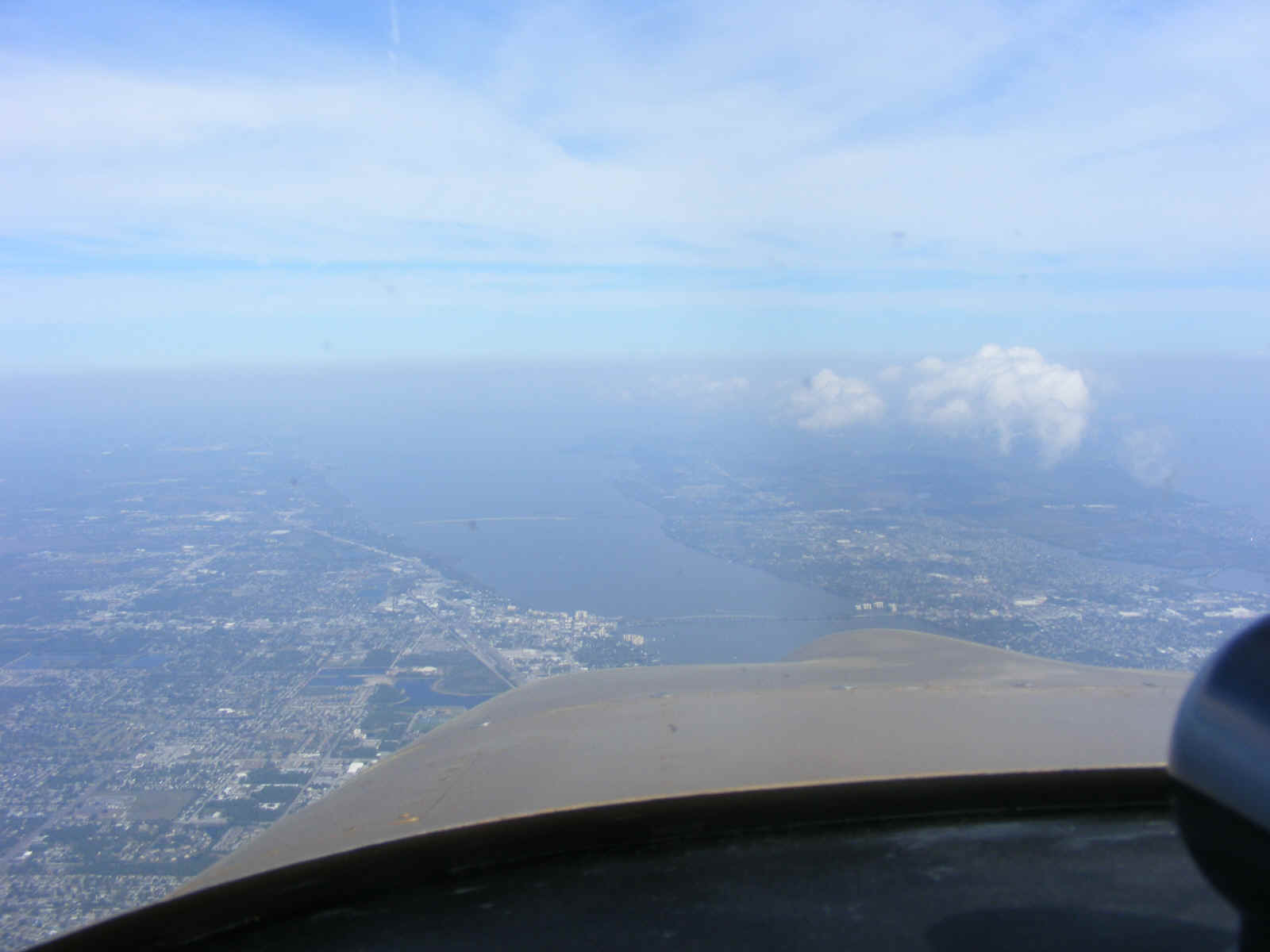 This map segment for the southern end of my flight today shows the path to take the three photos above and the Merritt Island Airport before I made the touch-and-go landing there. 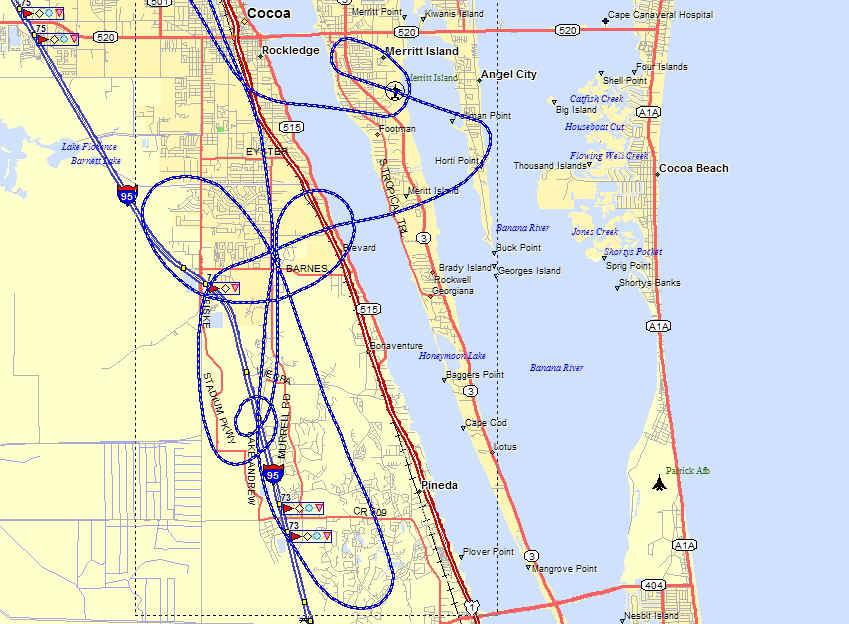 I went up to north end of the Indian River Lagoon and found enough clouds there to return back to the open area near home base. 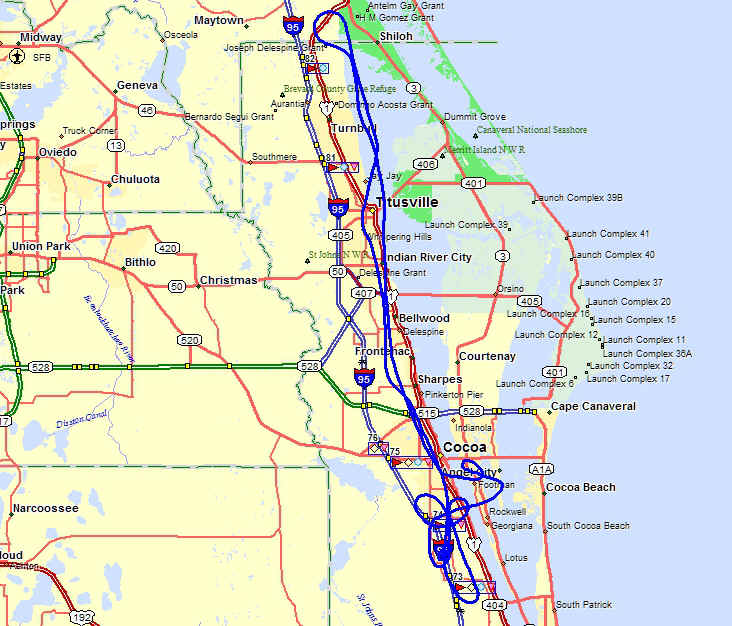 I decided to do a touch-and-go landing at the Merritt Island Airport before ending my flight for the day.  I was again heading south over the mainland looking southeast at the KCOI airport beyond the causeway near the right side of the photo below.  US 1 is the four-lane street at the bottom of the photo.  The Florida East Coast Railroad follows US 1 on the west side of the highway along much of the route from Jacksonville to Miami. 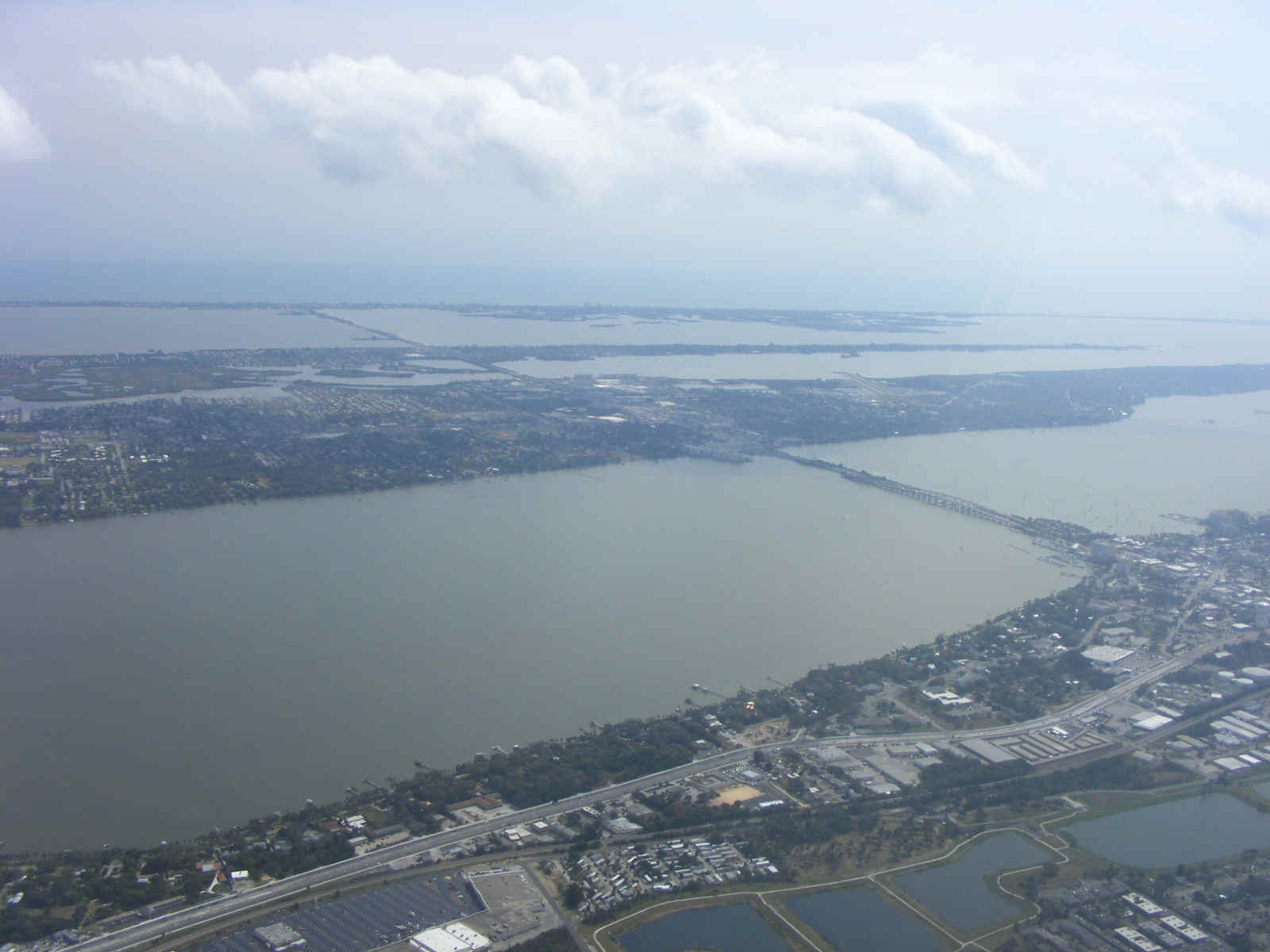 The building with a blue roof near the center of the photo below is early voting precinct where I cast my ballot after my flight.  I circled the site for a turn-around-a-point maneuver and made my approach and landing at Rockledge on runway 36. 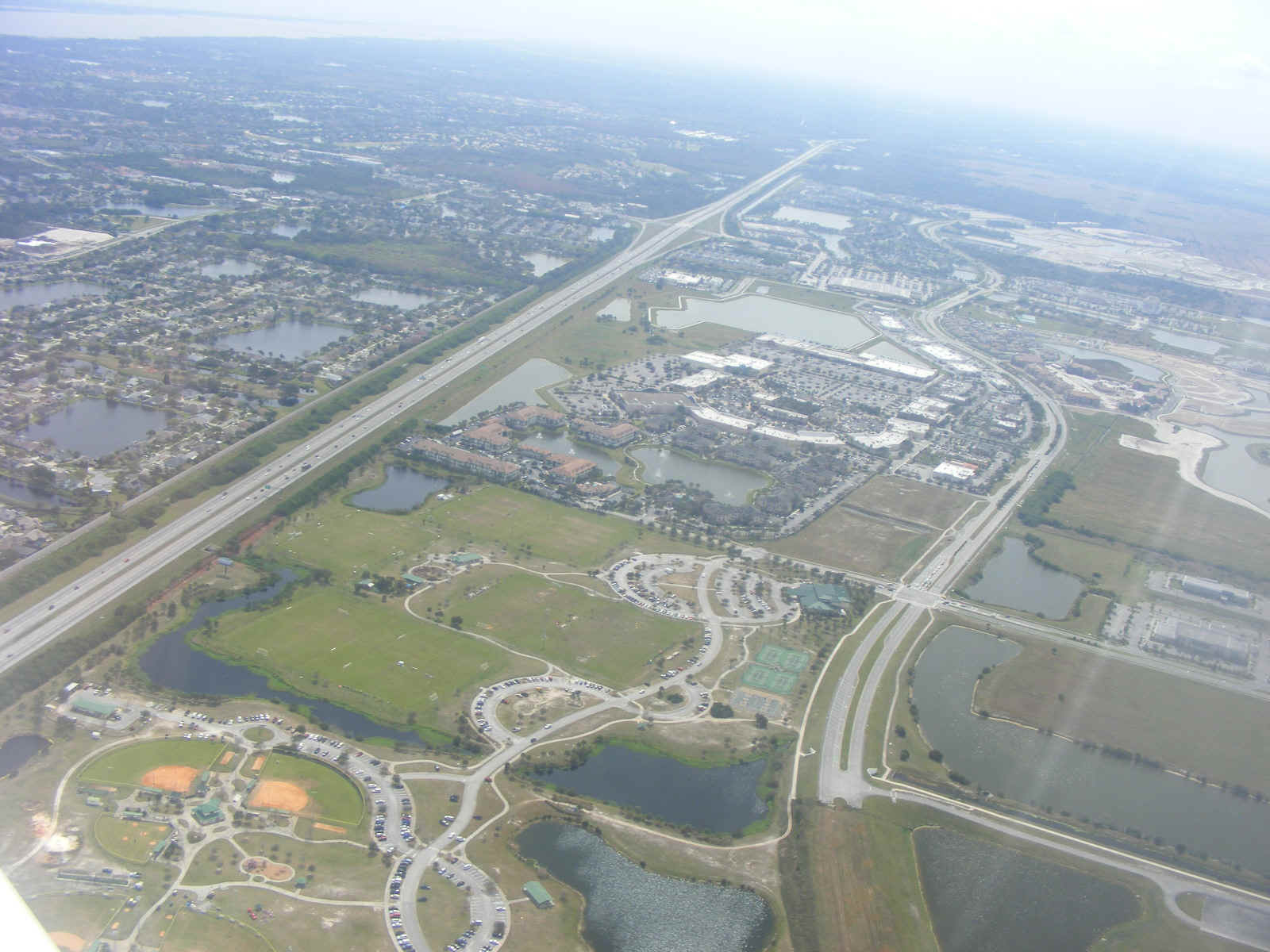 The Hobbs meter added 1.0 hours today for a total of 380.0 hours total time for my airplane.

March 11, 2016:  I passed another FAA stress test early this morning.  This is the month when I renew my FAA third class medical certificate.  I should have all my paperwork ready for the AME by next week and will see him before the end of this month.

March 19, 2016:  This web page and page 400 were edited this morning to add the maps from the Palatka flight on January 30, and the local Brevard County flight on March 5, 2016.  The weather forecast for later today is rain.  I have some time and I will go up to the Rockledge airport to see what is going on.

The 24-mile ride from my house to the Rockledge Airport is seen in this map I made today using my GPS in the car as I have done many times in the past.  I used Interstate 95 to keep the ride short and quick.  I looked at the time stamps on the GPS tracks and discovered I was at the airport no more than 15 minutes. 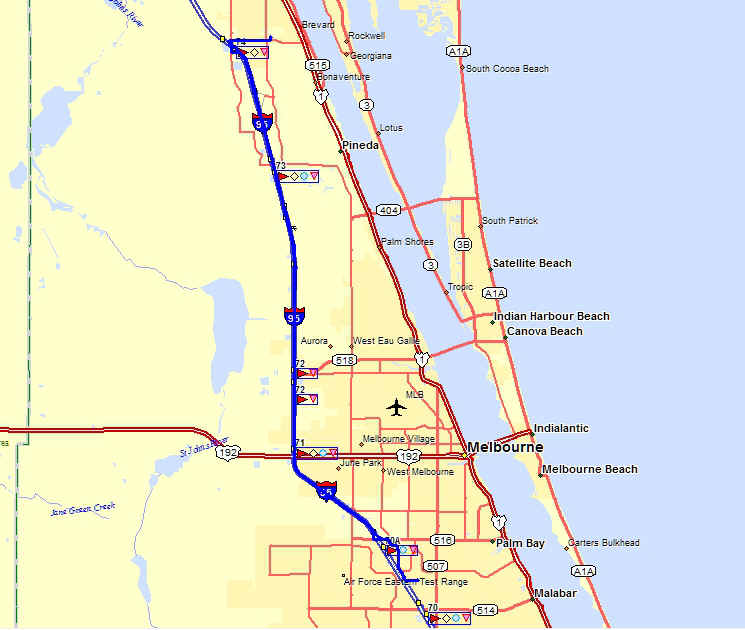 The weather was overcast, but high enough to get a short flight around the patch if I wanted to do that.  It was not bright out and turned on the forced flash feature of my digital camera.  You can see the flash reflected from the lenses on the cars.  A light breeze is blowing as shown by the flag. 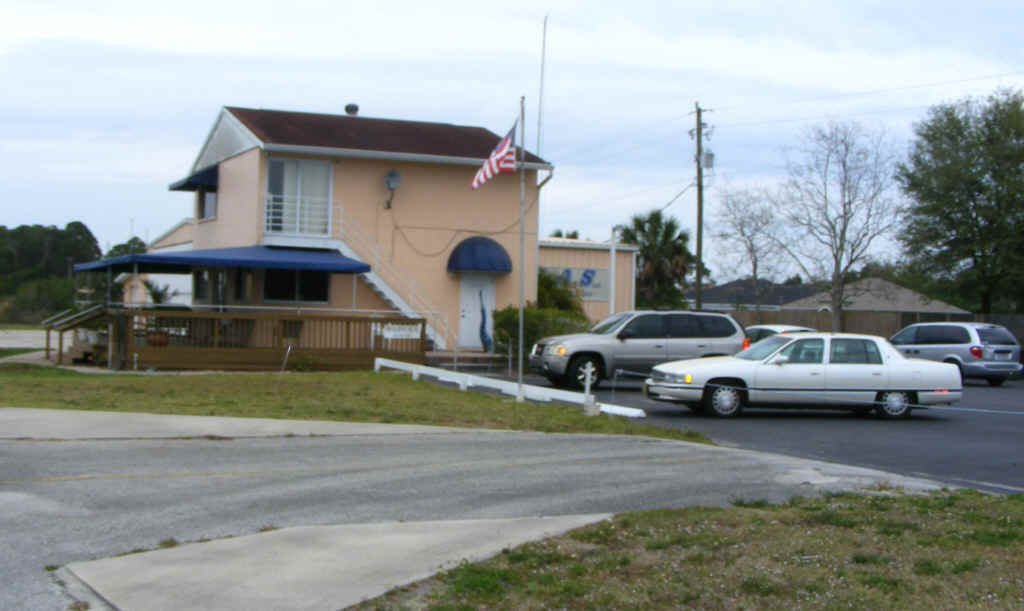 I took this photo of the FBO building to show the new palm trees that have replaced the old oak trees. There is a new set of awnings covering the porch and walkway. 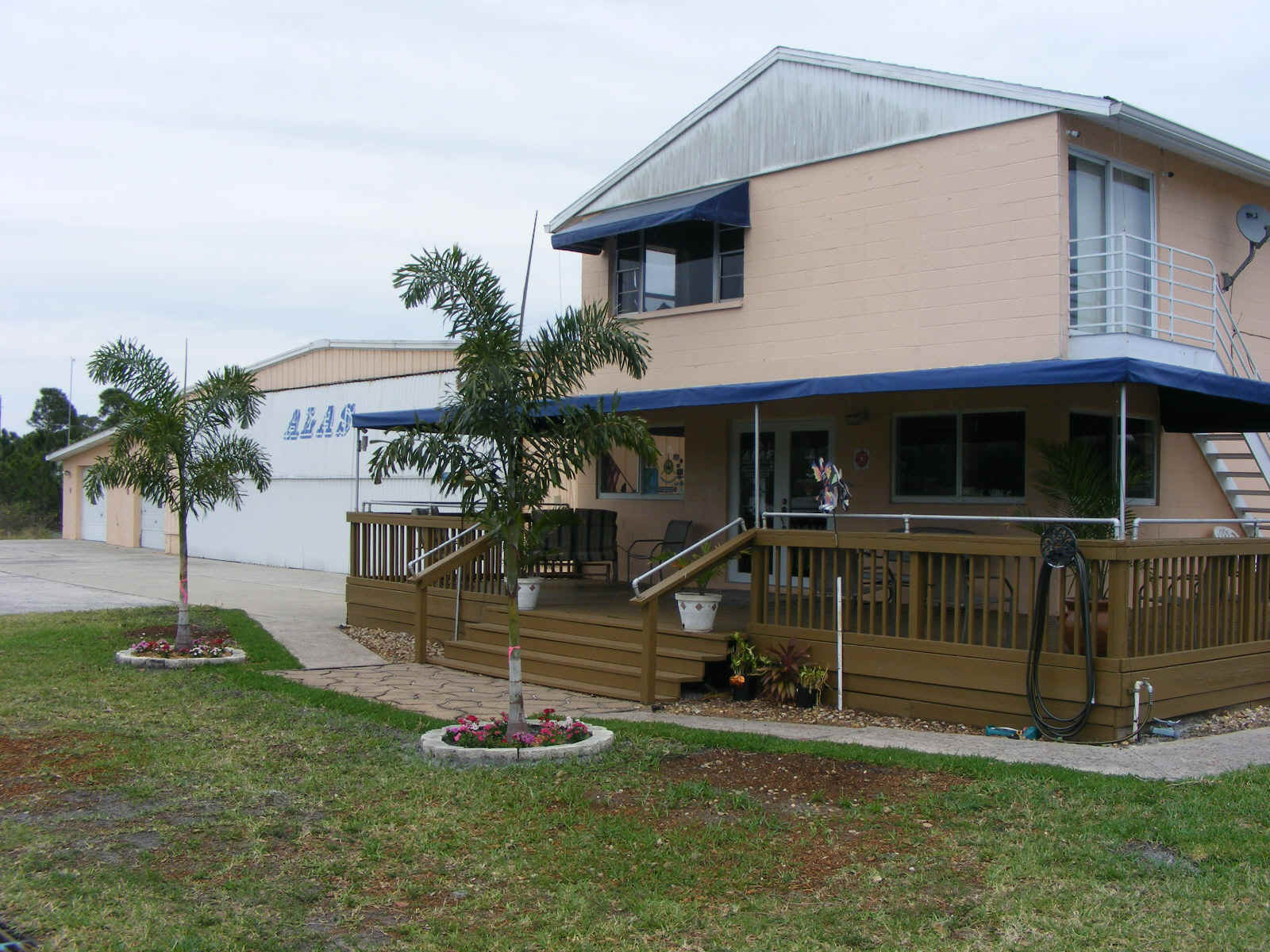 Bill was doing some work to cover up the new plumbing pipes leaving the building.  He was cutting the gray boards to fit around the access port for the sewer line.  I spent a few minutes to help out with a jig saw to get the round cutout on one of the boards. 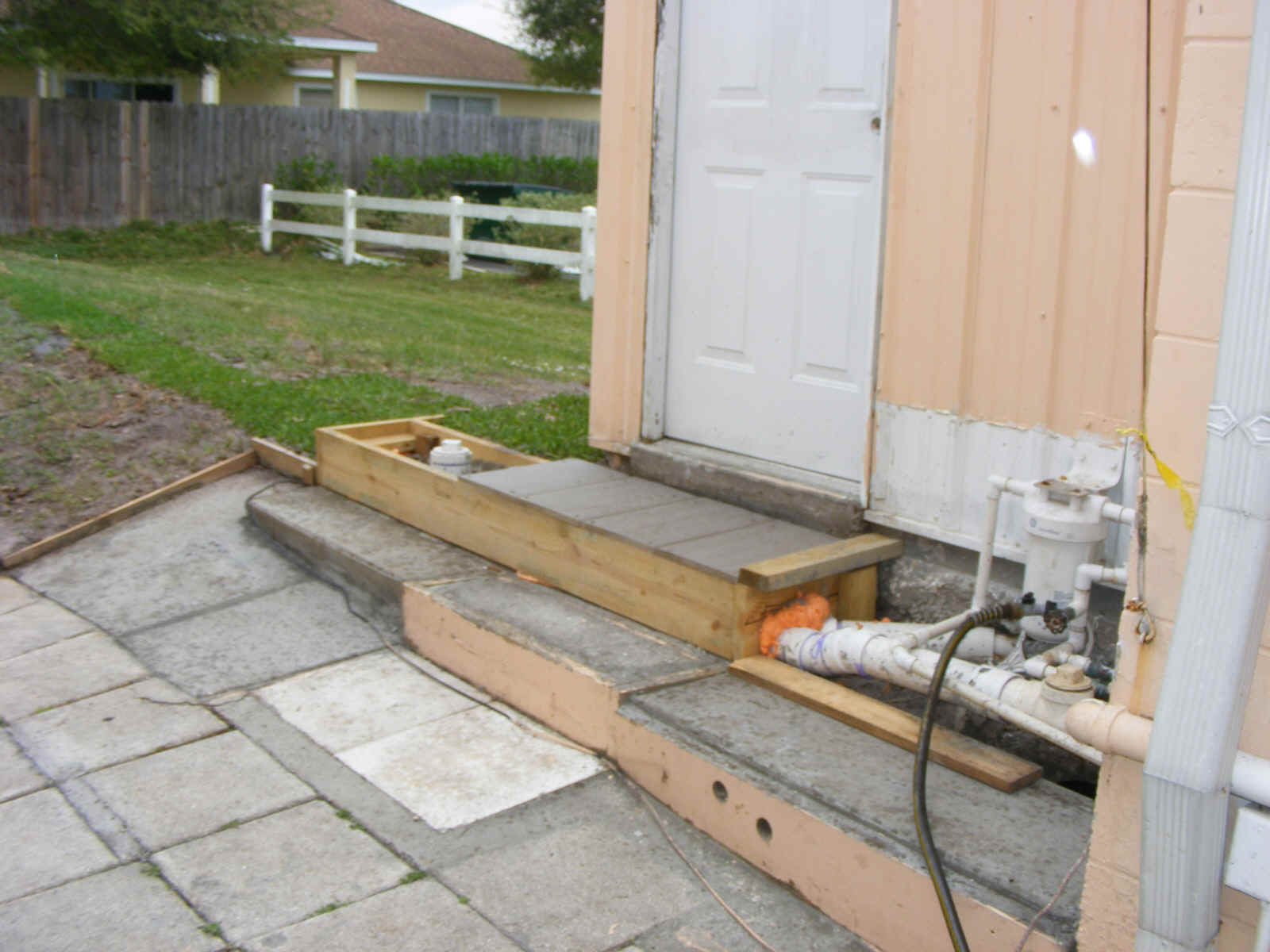 Some rain drops started to fall and that was the end of any hopes of a short flight today.  I headed for home to post these photos to the web site.