June 16, 2016:  This Consolidate B-36 Peacemaker from the 1950's was the largest of the propeller bombers that also had four small jet engines mounted under the wings.  This type of airplane was featured in the James Stewart movie "Strategic Air Command" made in 1955. 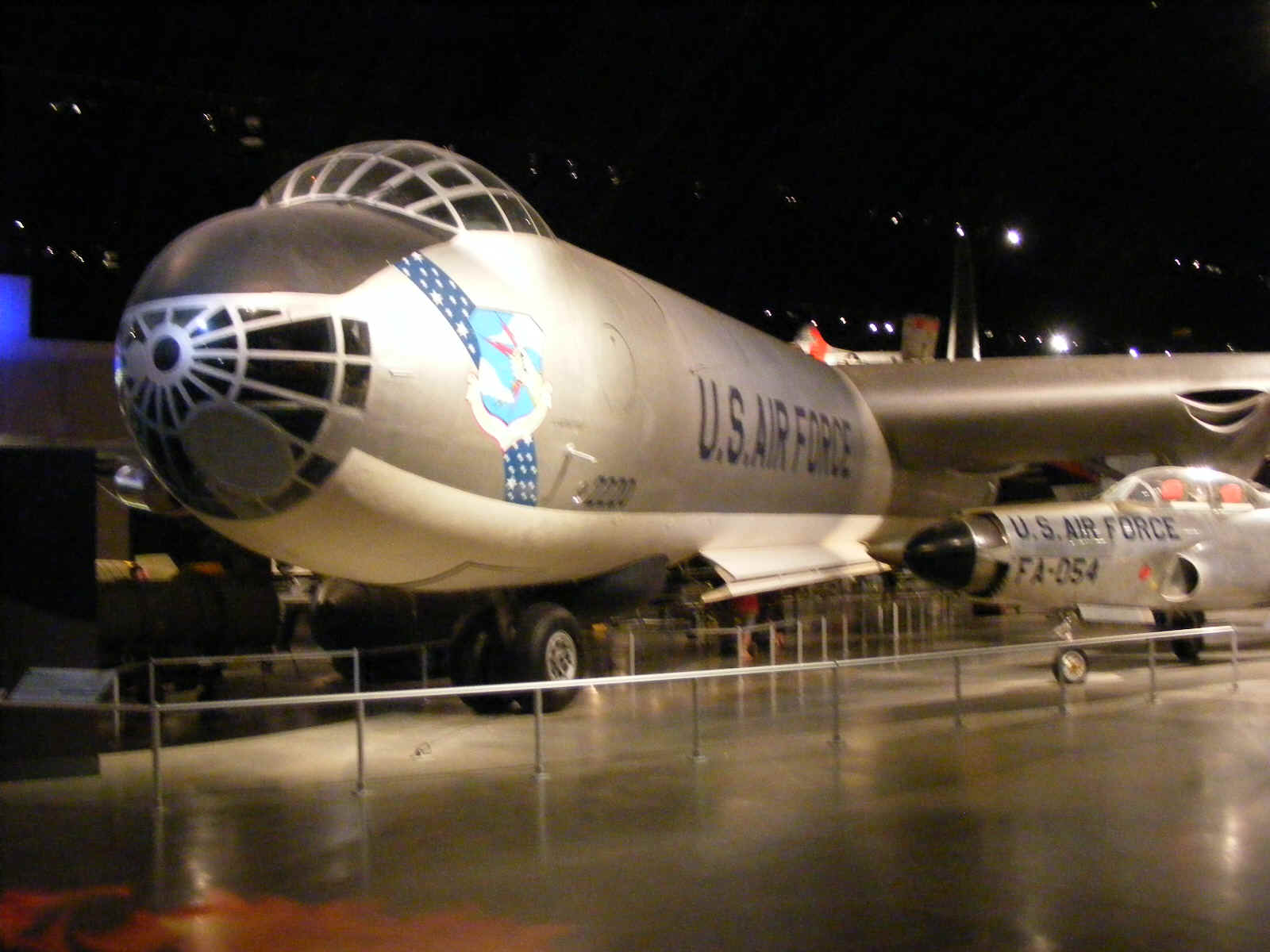 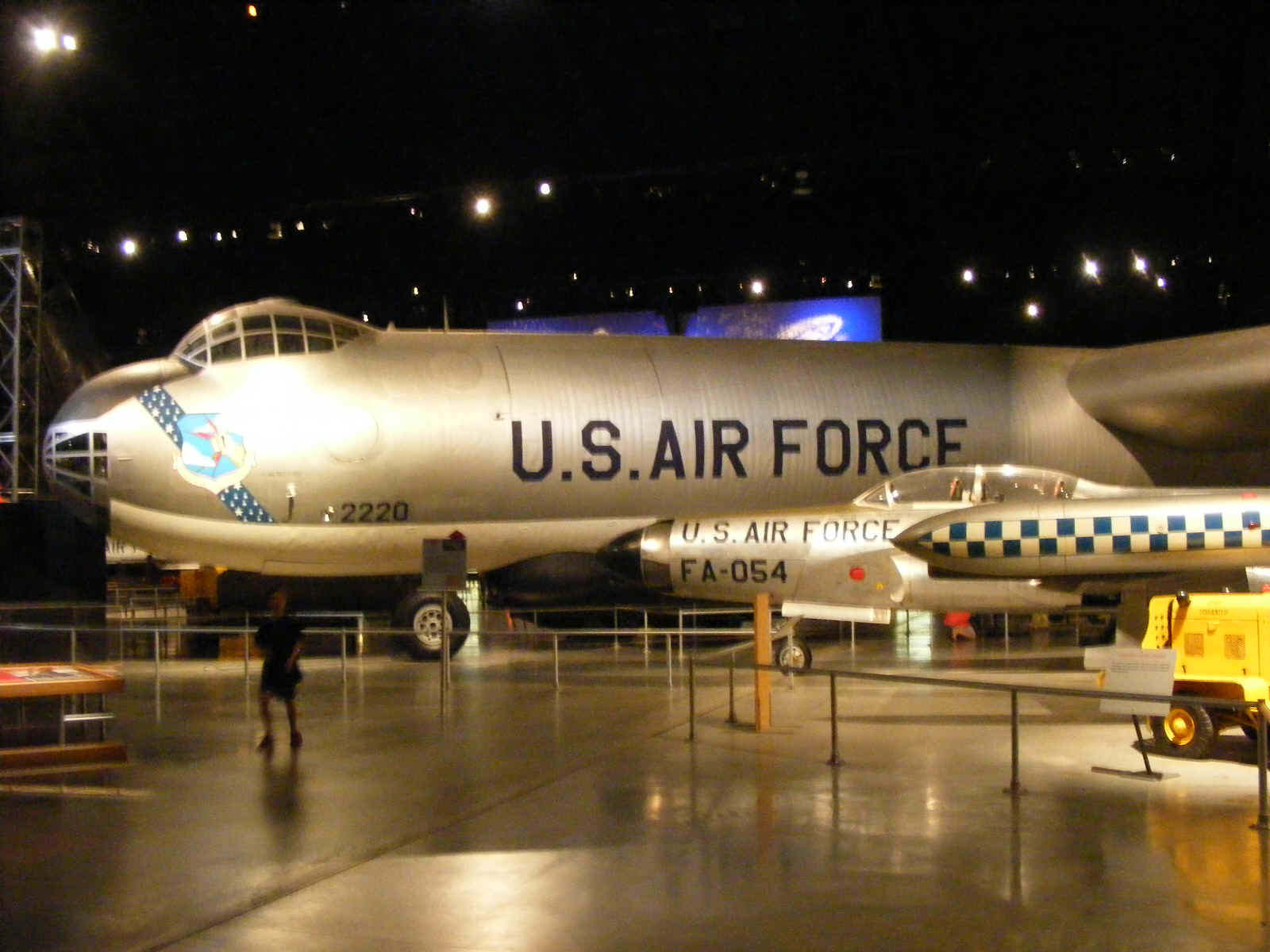 This huge tire was used on the first prototype of the B-36.  It was so heavy, they replaced with four tires on a "truck" that could pivot up and down to insure a smoother ride, but more importantly, blowing out ONE BIG tire could be disastrous.  With four tires on the main landing gear on each side of the airplane, a blow-out is much less of a problem.  Look at the bottom left corner of the photo to see one of the FOUR smaller tires on the right side of the airplane.  Three of the SIX pusher props are visible on the right wing and a small dual jet engine pod is visible just above the man a the two children near the lower right corner of this image.

The Boeing B-47 was the first US Air Force all-JET bomber.  It had SIX jet engines.  It was also featured in the Strategic Air Command movie near the end.   The movie was about a professional baseball player who was a pilot in World War II and called back to active duty.  He flew bombers during the war.  The movie shows Jimmy Stewart actually flying all the planes in the movie.  He flew the B-17, B-24, B-36, B-47 during his 27 years of military service on active duty and in the US Air Force Reserve.  He enlisted in the US Army on March 22, 1941 as a private.   Because he had his private and commercial pilot's license, and a college graduate, he was commissioned in the Army Air Corps as a second lieutenant on January 12, 1942 making the jump from and enlisted corporal to an office over night.  His final rank was Brigadier General when he retired from the US Air Force reserve on May 31, 1968.   You can learn about his military career on this Wikipedia page:  https://en.wikipedia.org/wiki/James_Stewart 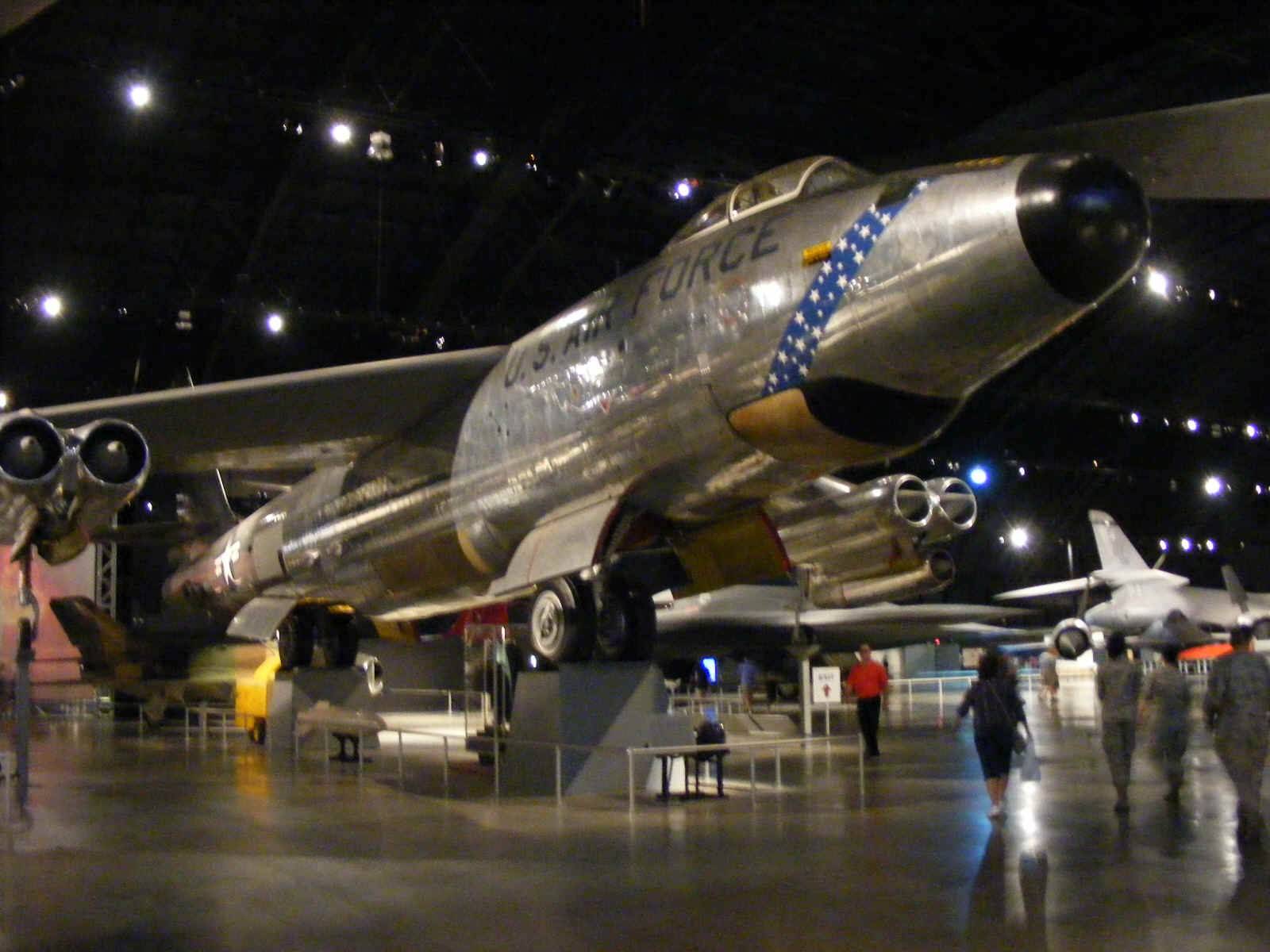 During World War II, there were a lot of companies building airplanes.   Here is one built by the Fisher Body division of General Motors.  It did not live up to the expectations with only EIGHT airplanes built and tested.  The story of this airplane in the second photo.  This airplane is parked behind the XB-70 supersonic jet bomber you will see a little further down this web page. 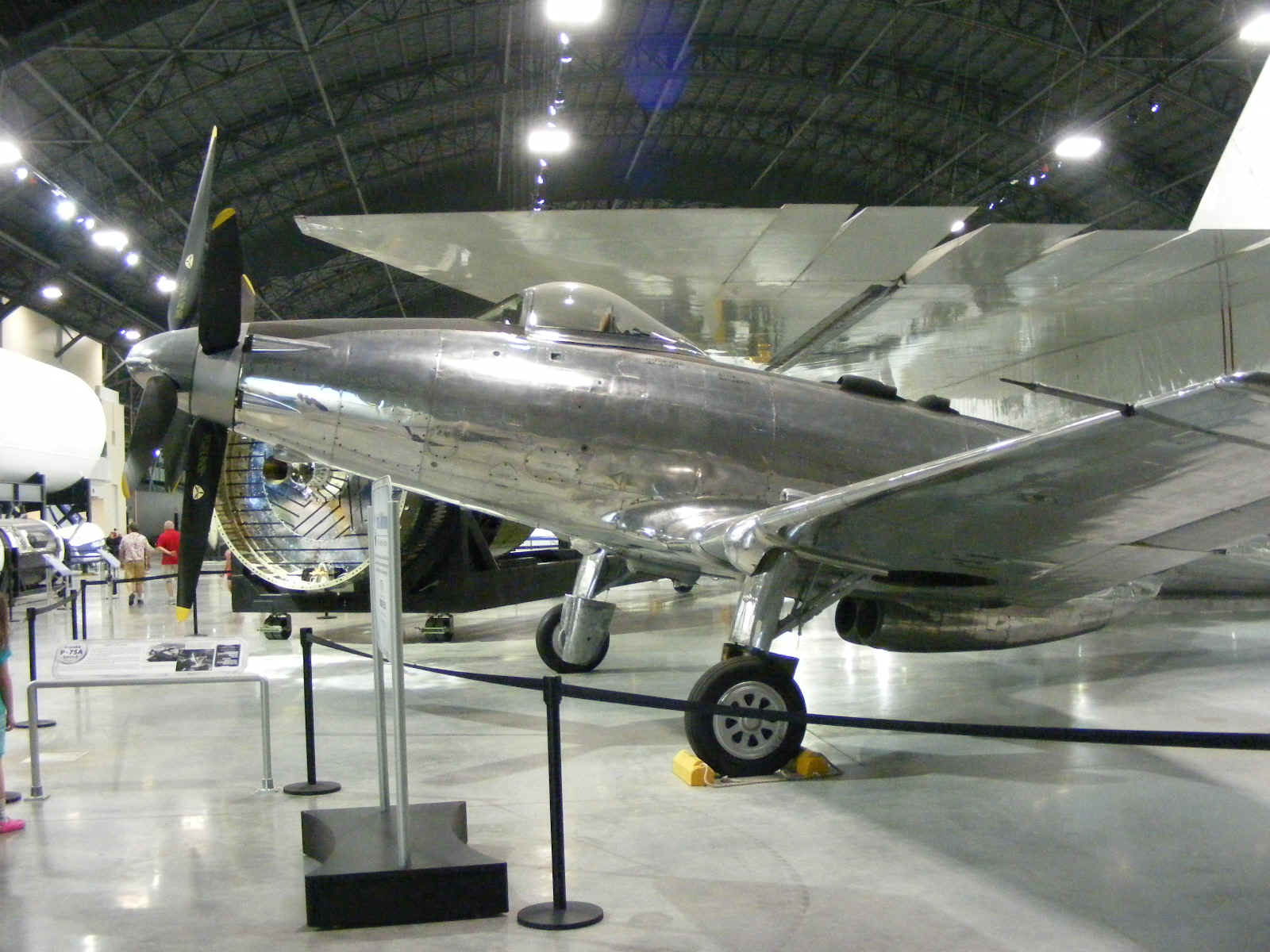 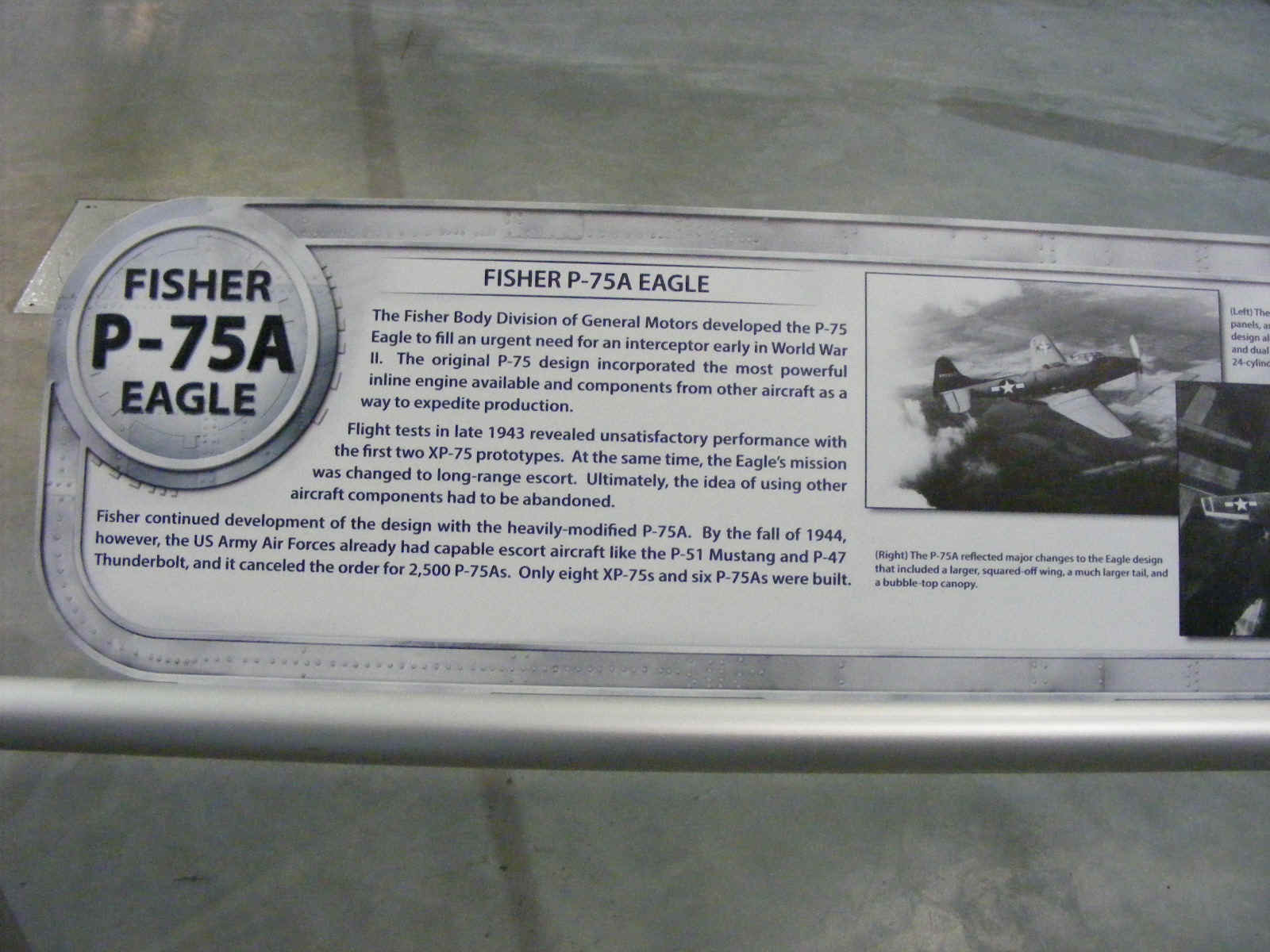 Thursday afternoon continues as I took a number of photos as closing time approached.  There is just too much to see and learn at the USAF museum at Wright-Patterson AFB.  The XB-70 dominates the center of the new hangar.  The delta wing tips are shown here in takeoff and landing position.  In flight above mach 1, the wing tips are lowered to produce compression lift and get more speed.  There are SIX big engines at the back of the fuselage. 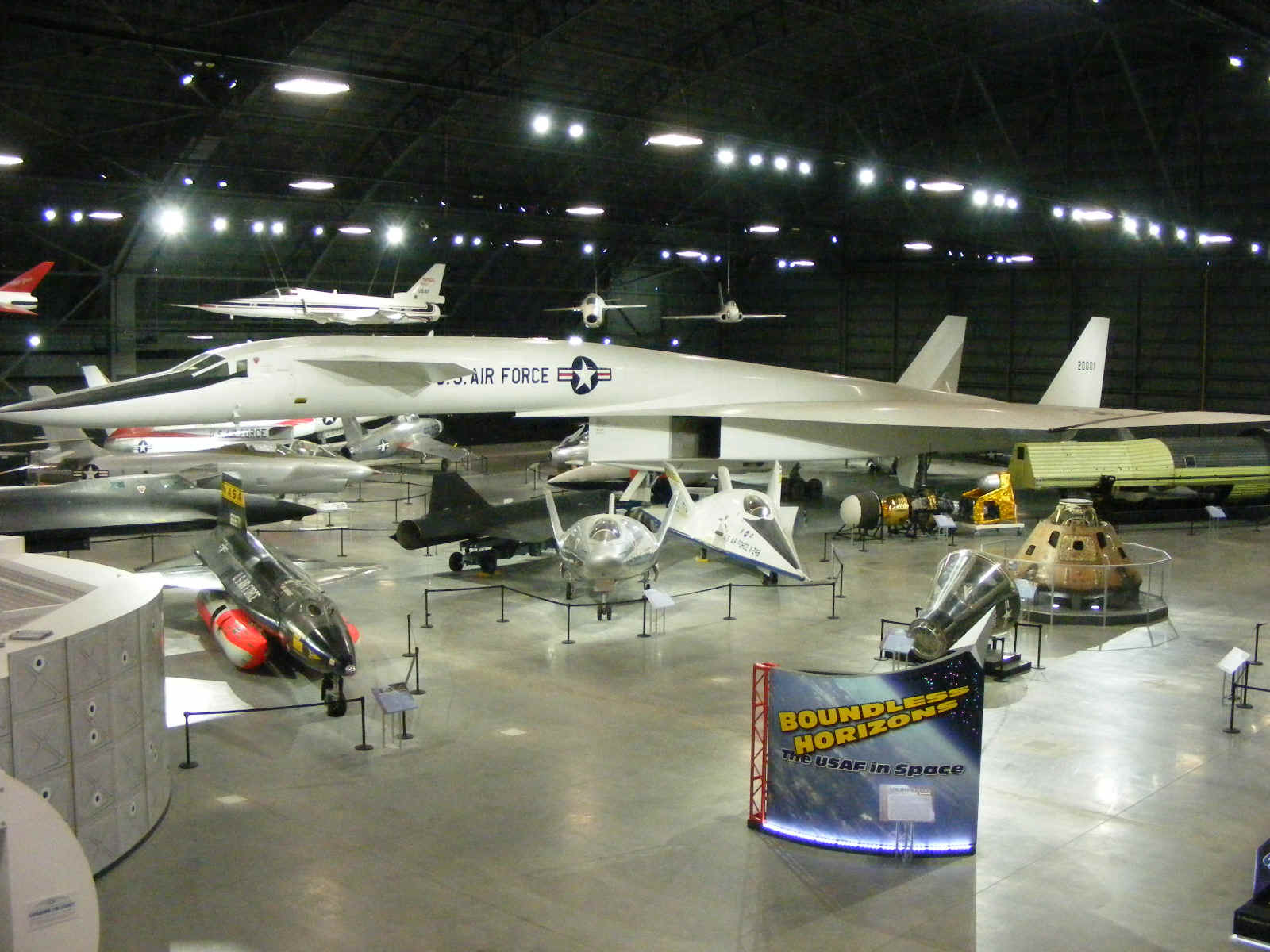 Here is another view of the XB-70 crew cabin up front showing the canard to control pitch for climb and descent  This airplane could reach a speed of Mach 3 and literally peeled the paint of the skin.  Down in front of the XB-70 is the A-12, an airplane built for the CIA  which was the pre-cursor to the larger SR-71, both from Lockheed Skunk Works.  There is more to see in this photo with a rocket-powered X-15 and s training mock-up of the Space Shuttle seen here. 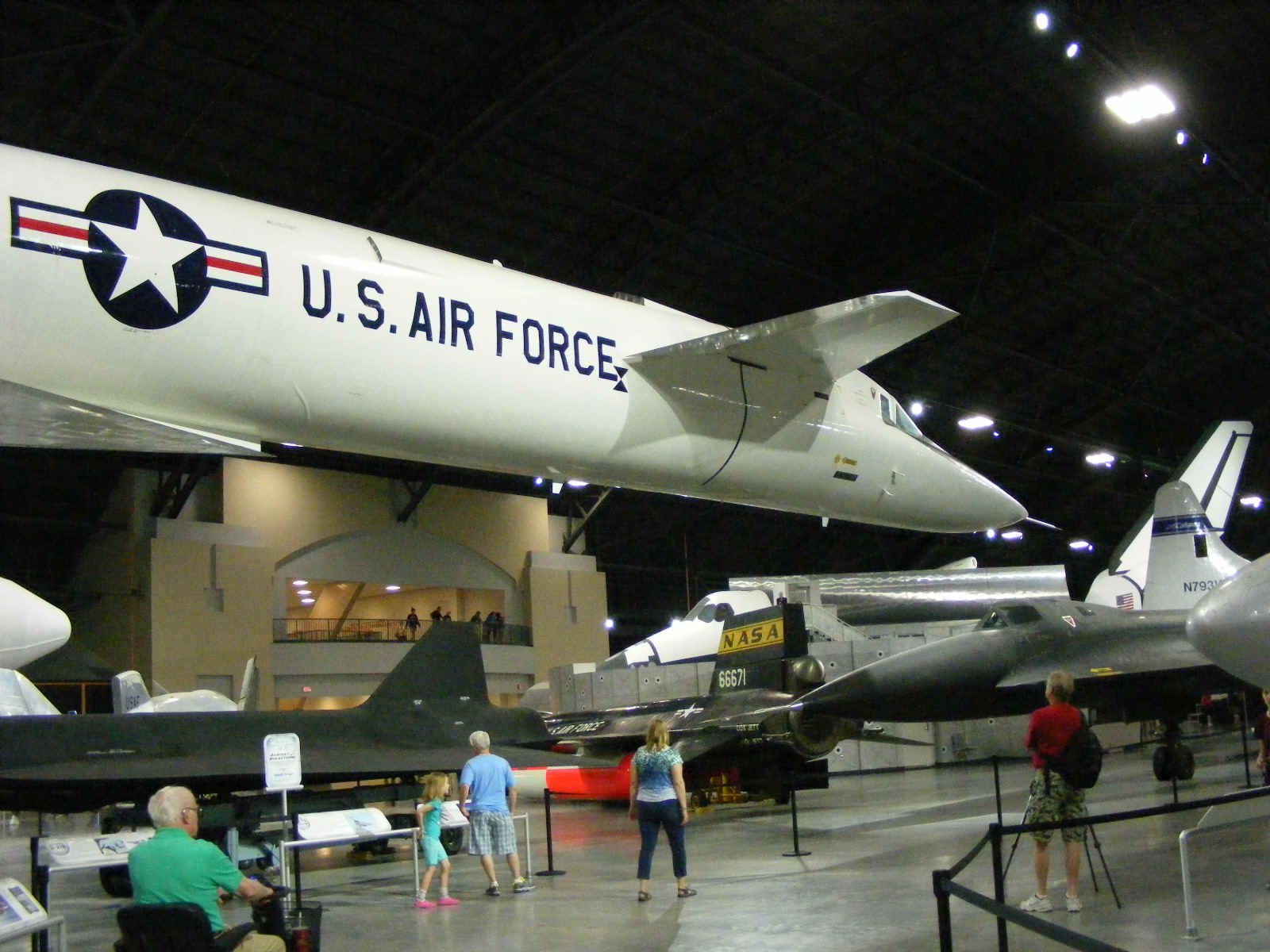 Here is close-up view from the balcony of the shuttle simulator trainer.   It has all the stuff in the cabin as the shuttles that flew in space. 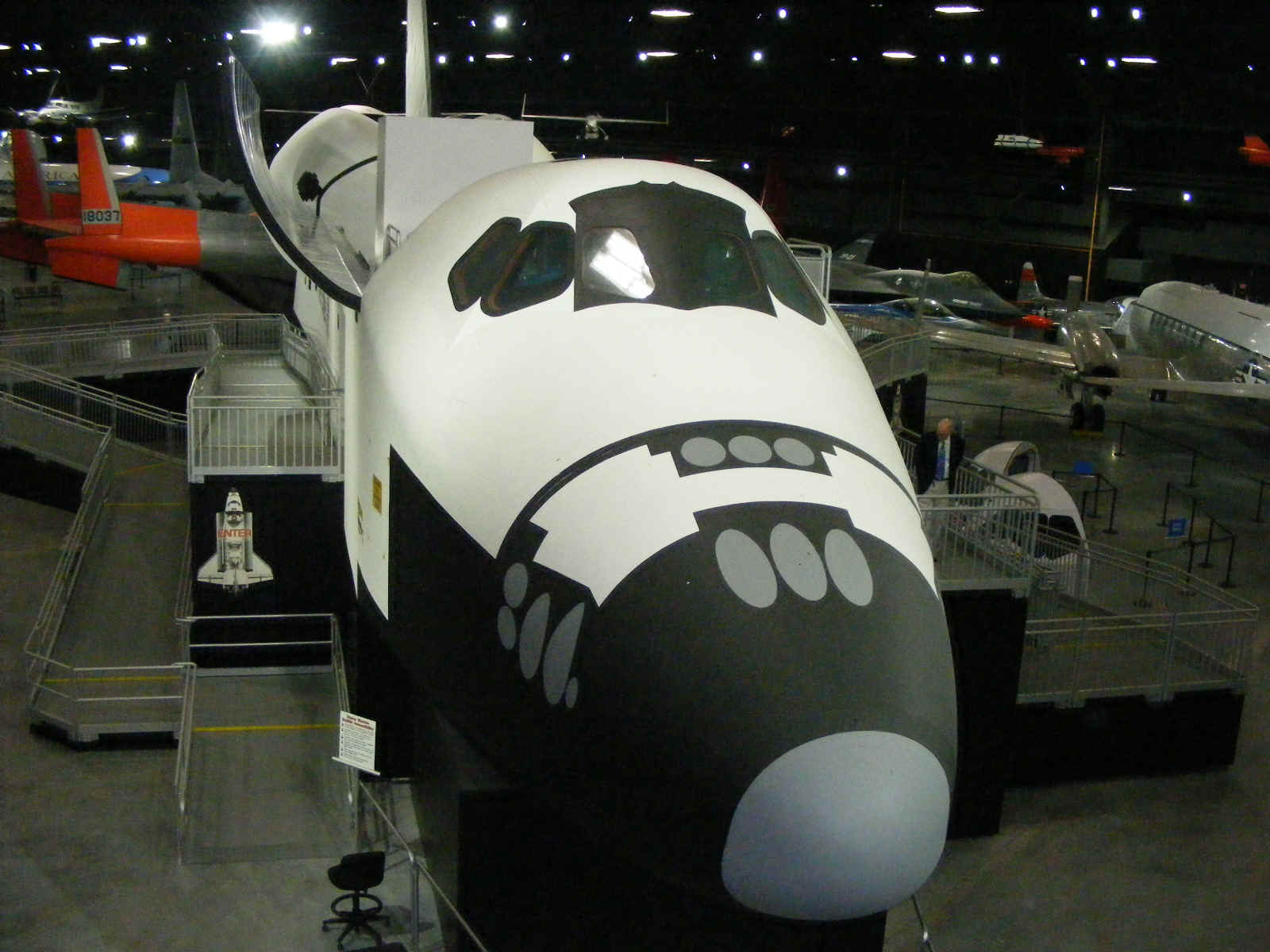 The north end of the new hangar has Presidential airplanes to see from props to jets of several sizes.  This Boeing 707 was used for JFK for the trip to Dallas in 1963 and it brought him home to Washington after that tragic day. 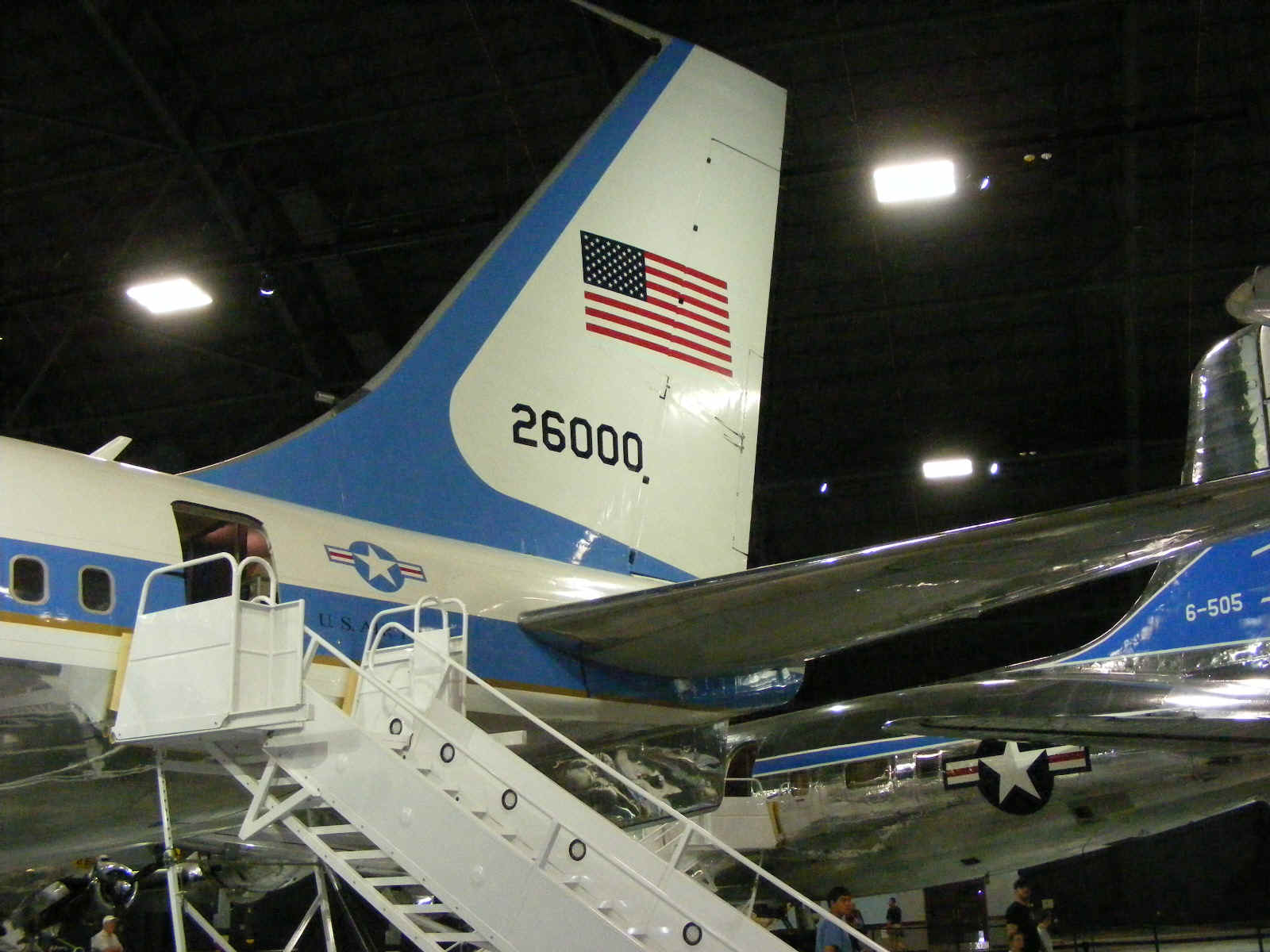 Here is the other side of Air Force 26000, also known as Air Force ONE when the President was on board.  There were two of these airplanes.  The other one had the tail number 26001.  Both were replaced by the Boeing 747 which has in-flight refueling capability that was not part of these older Boeing 707 airplanes. 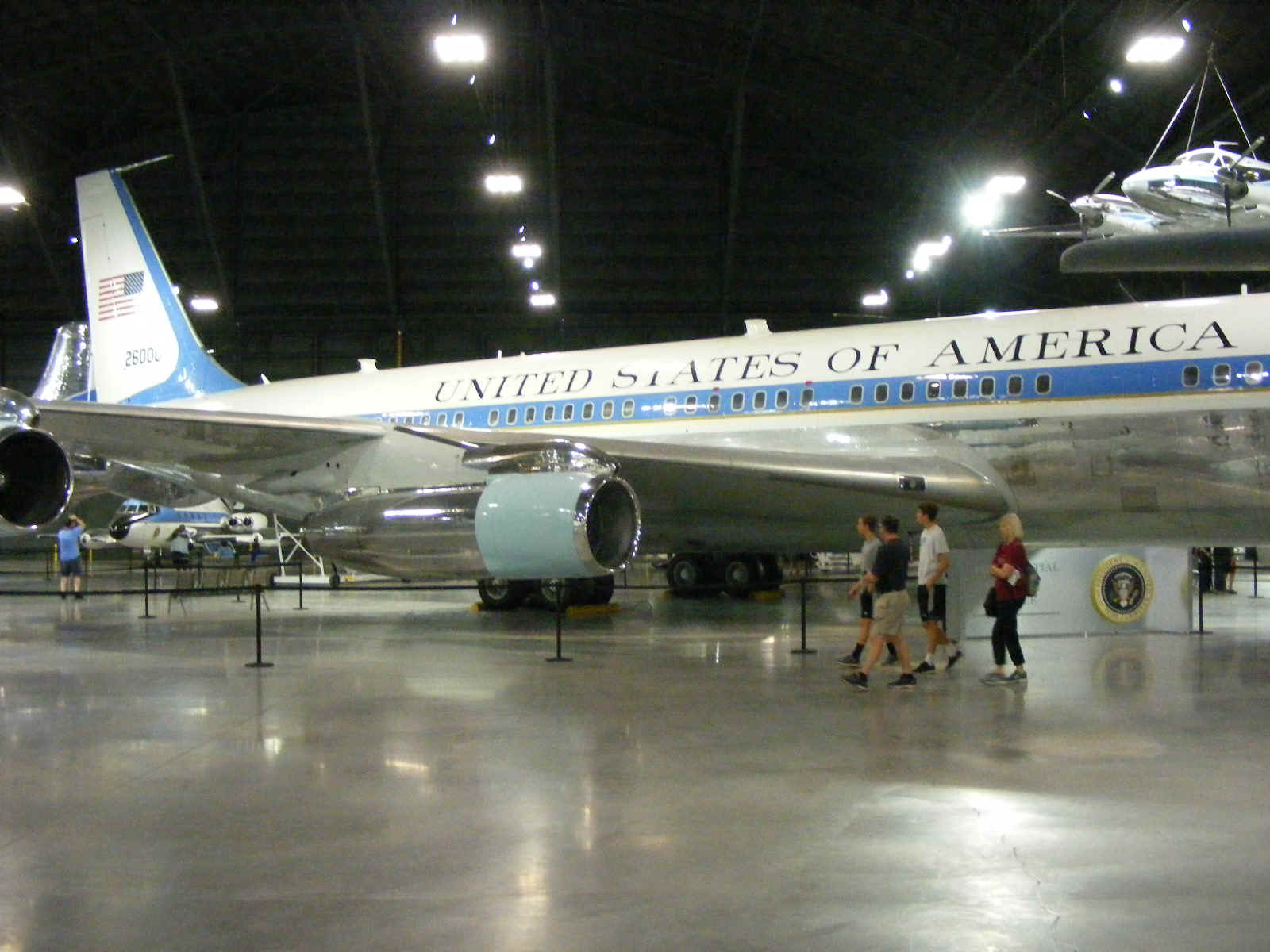 I was running out of time this day and did not get to look inside the Northrop Grumman exhibit seen here.  The interesting aircraft seen in this photo is the X-15 with extra large exterior fuel tanks under the nose of the XB-70, and in the back, there is delta wing "Verti-jet" that was an unsuccessful design for vertical take off and landing.  It had a big hook on the bottom to hang it on a steel cable for landing.  The yellow "wall" behind the jet is actually a tilting trailer for transport on the ground which is raised to the vertical position for takeoff and landing. 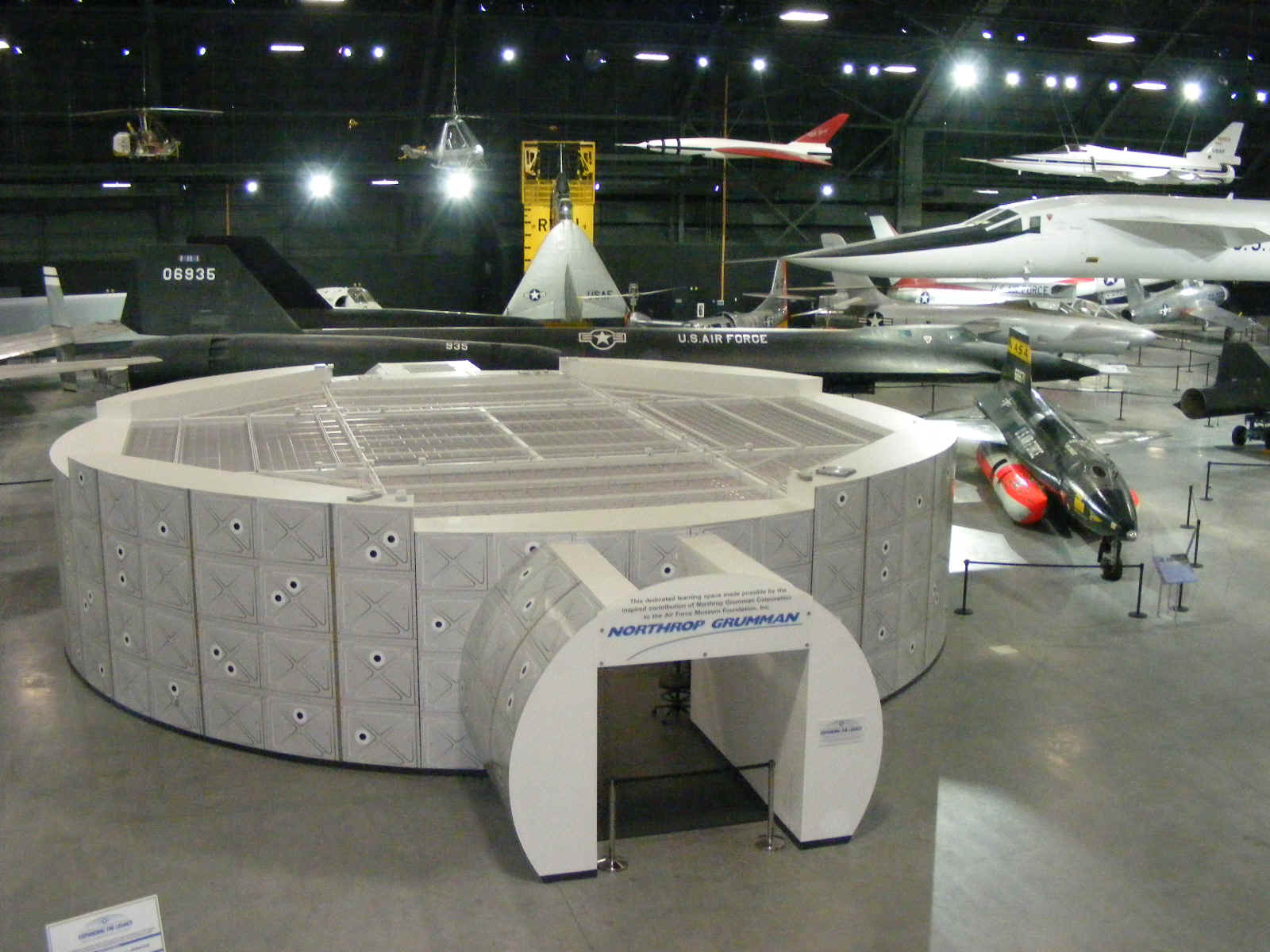 The Lockheed C-141 Starlifter on the left side of this photo was the first US Air Force cargo jet built in the 1960s.  I would see these airplanes take their first flight from the Lockheed Georgia plant where they were built on Dobbins Air Force Base near Marietta, Georgia.  That same aircraft plant built bombers in World War II.   I flew on one of these airplanes from California to Hawaii in 1969 while I was returning to Korea from a mid-tour leave.  I got stuck in Hawaii for three days waiting for the next military air lift command plane heading west across the Pacific Ocean.  This particular C-141 is the "Hanoi Taxi" which brought home POW's at the end of the Viet Nam War.  You can see the full length of AF 26000 in the background and part of a C-130 also built at the Lockheed Georgia plant.  I could see bomber plant from my third-floor dormitory room at Southern Tech in 1968, also in Marietta, Georgia.  Many a C-130 and C-141 took off during my years at Southern Technical Institute where I received a degree in Electrical Engineering before entering the US Army in the summer of 1968. 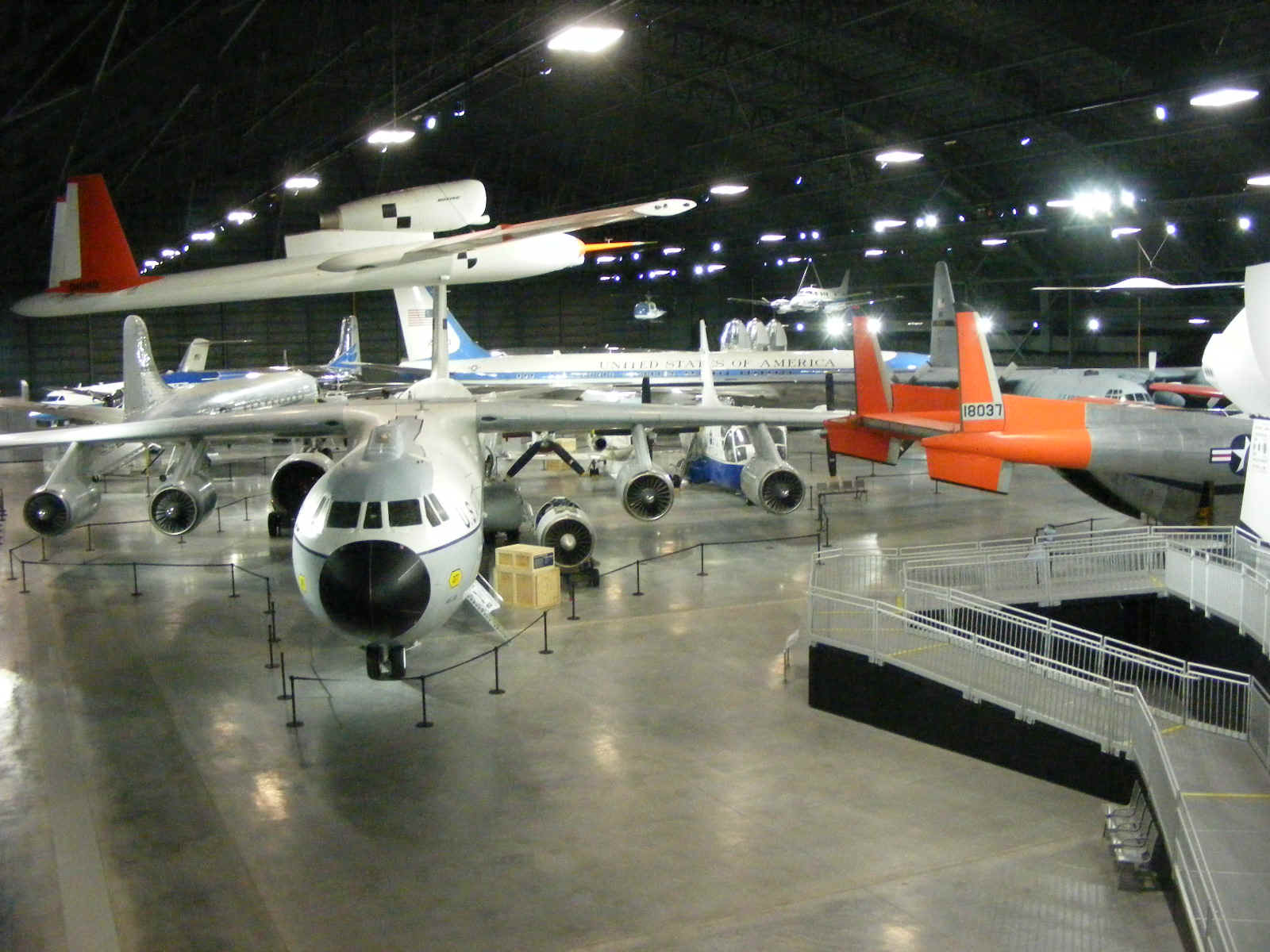 The B-2 Stealth Bomber is quite a sight.  If you turn off the lights, it disappears and that is why it flies combat missions in the dark. 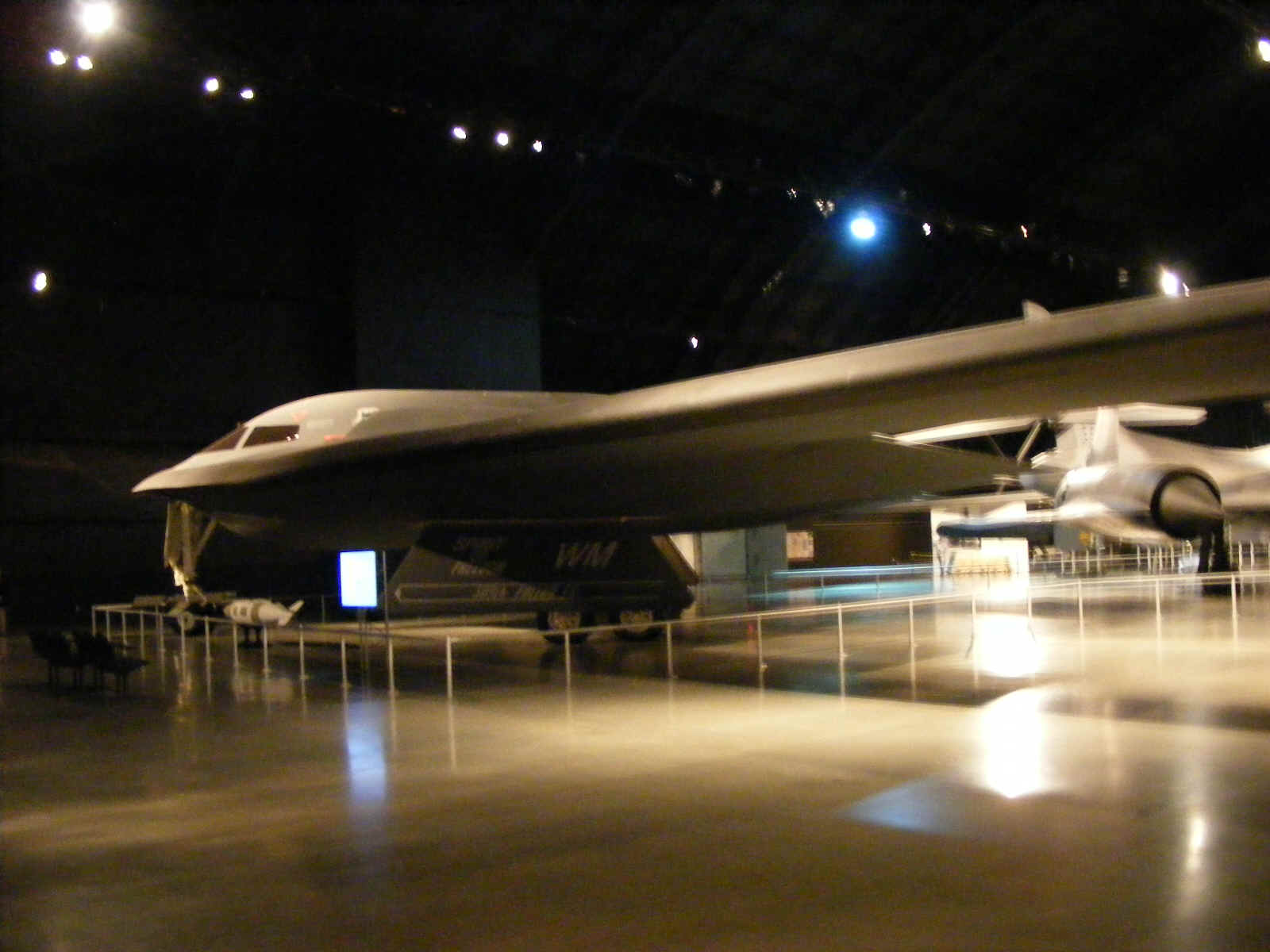 The Wright Brothers memorial is near the base and the museum.  They gave us wings.

The monolith is on a hill that overlooks the fields where they flew their airplanes as the developed the newer models.  The person seen in the lower left corner of this photo is looking out to the test flight area the Wright Brothers used here near Dayton, Ohio. 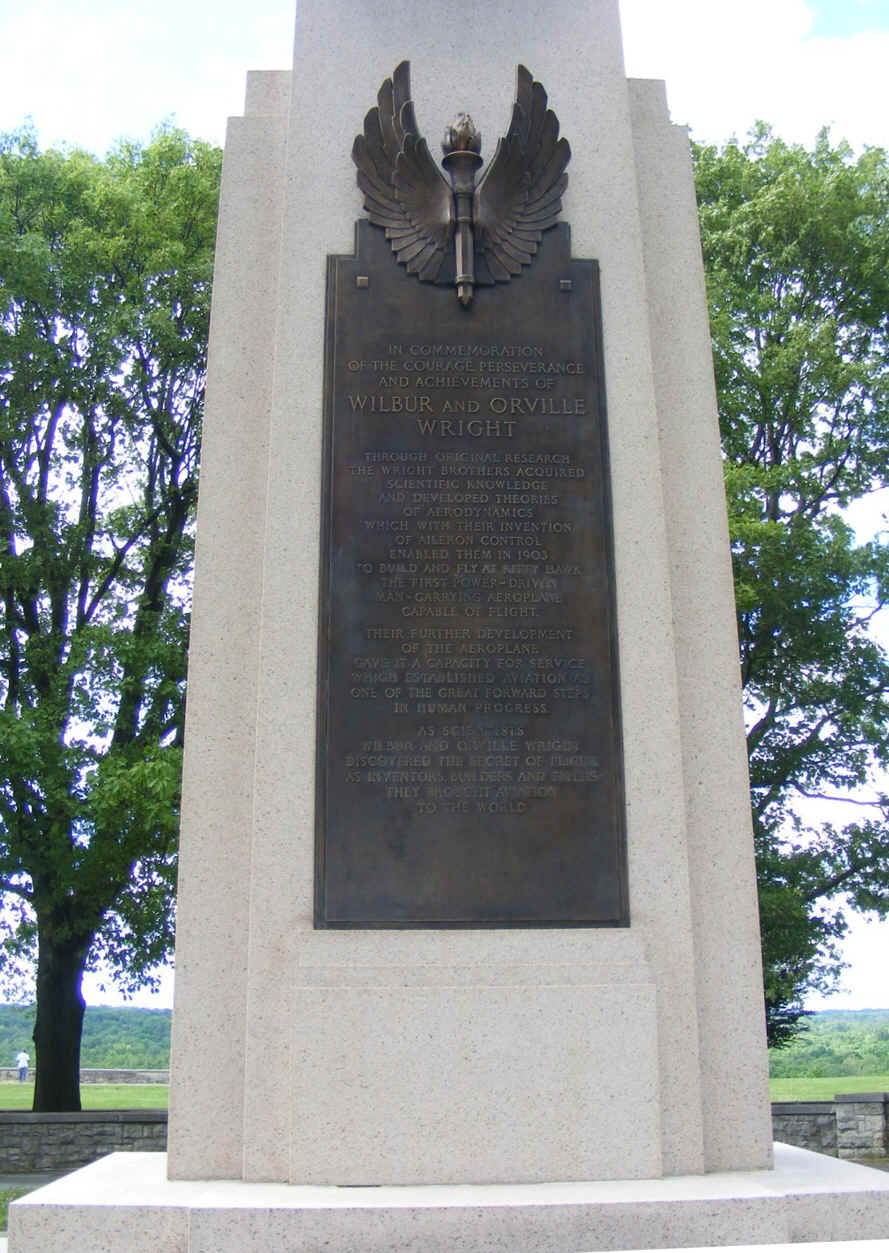 June 17, 2016:  My Friday began in Columbus, Ohio with a customer sales call at Graybar Electric.  The data telecom group had one guy with fiber optic RF experience.  He asked about distributing satellite TV signals via a passive optical network (PON).  I showed him our system that feeds all the airline terminals at the DFW Airport.  This was an easy meeting.

June 27, 2016:  My contributions to the Jerrie Mock Google Earth project were presented at the dedication of her exhibit at The Works Museum in Newark, Ohio on Saturday, June 18, 2016.  I gave a one-hour presentation on how to fly with Jerrie Mock using Google Earth and the GPS files I created for use in Google Earth tours.  The 15-minute Windows Media Player presentation of the flight from Columbus, Ohio to Bermuda was also shown at the beginning of that event.   I have a number of photos to process that were taken at the museum.  All those photos will be added to new pages in the Jerrie Mock section of this web site.

July 14, 2016: This is a test of the new web server upload.  Edited on Y drive using FP98.  The company that hosts my web site has moved my web page files to a new server and no longer supports Microsoft Front Page server extensions.  As such, I now have to manually upload the new pages and photos to the server using FTP techniques.  I have to update all my pages with new hit counter codes to restore the lost counter web bots that used the FP extensions that are gone now.  I will also have some new travel pages soon from a trip I made last week to Arizona July 6 to July 9.

July 21, 2016:  I have been struggling with this web site and finally did the research of the symptoms today.  I found out the older server was running on a Windows server and that was why my old FrontPage 98 program could be used for publishing.  When I moved to the new hosting company, they set me up with a Linux web server that also has FrontPage Extensions and I was having problems with FP98.  When I found the solution online today, all I had to do was find my hardly used copy of FrontPage 2000 and install it on my Windows XP VIRTUAL computer that is part of my laptop.  I was still having trouble with my hit counters and found that solution online also.  I have just finished all that cleanup and published the updates to the web site.  I am getting more comfortable with the changes that were made in the upgrade from FP98 to FP2000.  I just learned where the color of the FONT is located on the FP editor program.

IT IS GOOD TO BE BACK TO NORMAL ONLINE!  My friend Marty called me a few days ago to be sure I was still alive on the day the DNS pointer for www.n2prise.com was pointed to the new server.  The URL for www.n2prise.org remained on the old server until yesterday when I had that one pointed to the new web server.  There is more news coming and I hope to get some of that stuff posted over this coming weekend with a new page beginning to kick it off!