May 28, 2017:  Today is Sunday and the first flight after replacing all the fuel drains on the airplane seen on the previous page.  I came out to the airport yesterday and ended up cleaning the airplane after putting the nose bowl back on the nose wheel fairing.  I had to put plenty of super glue on the fairing that shapes the air flow on top of that part.  I also used my Dremel tool with the sanding drum to insure clearance from the fairing on the nose gear leg when the nose wheel pivots in a turn.  By the time I was finished the cleanup work, it was too hot to go flying.  The misery index from the heat was one factor, the lower efficiency of the propeller and lift from the wings was the safety factor I would not ignore.  The paved runway at Rockledge is 2,000 feet long.  The grass strip at Wendell's strip is 2,500 feet long and it was surrounded by green vegetation.  Rockledge Airport has a lot of pavement around it on two sides.  The temperature when I left the airport was 94 degrees F.  I noticed the temperature was up to 99 degrees F when I was heading south on Interstate 95.

I returned to the airport on Sunday morning and was airborne in 80-degree weather.  My GPS shows 43 minutes flight time going north and west to Umatilla Airport.  My fuel receipt purchase of 32.2 gallons of 100 Low-Lead at 10:33:08 AM to fill the tanks.  I was not pushing my speed as I wanted to arrive with a good fuel reserve.  I usually cruise between 140 and 150 MPH for nearby trips, burning about 5 gallons per hour.  I noticed the 8-Gallon warning light from my engine monitor came on as I finished the run-up test just before takeoff from Rockledge.  That left me with just under 3.8 gallons in the tanks when I pulled up to the fuel pump at Umatilla today.

As usual, the departure from Rockledge heading north puts Space Coast Regional Airport (KTIX) below me at 9:42 AM as I climb up above their class D air space.  The Indian River Lagoon is below me as I also like to avoid Dunn Airport (X21) on the north side of Titusville, Florida.  On a day like today, I give this airport a wide berth and beware of falling skydivers at Dunn.  The KTIX tower was providing advisories about parachute jumping at Dunn today. 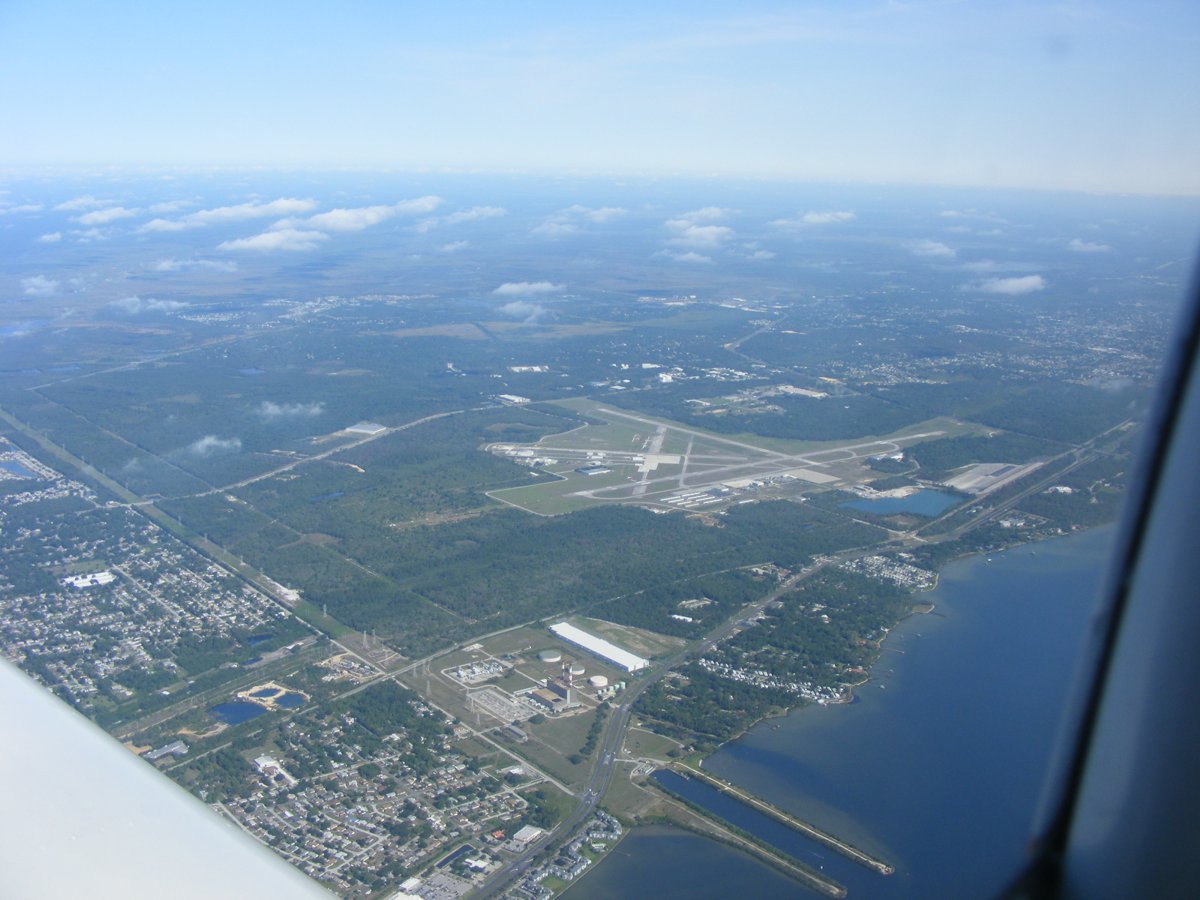 When I first posted this image today, I was surprised by the reflection from the inside of my canopy being a perfectly straight line.  That causeway running from LEFT to RIGHT across the picture is the tourist route to the Kennedy Space Center museum seen at the right edge of the picture.  That "river" seen turning right up ahead is a water access to the space center for freight via barges and tug boats. 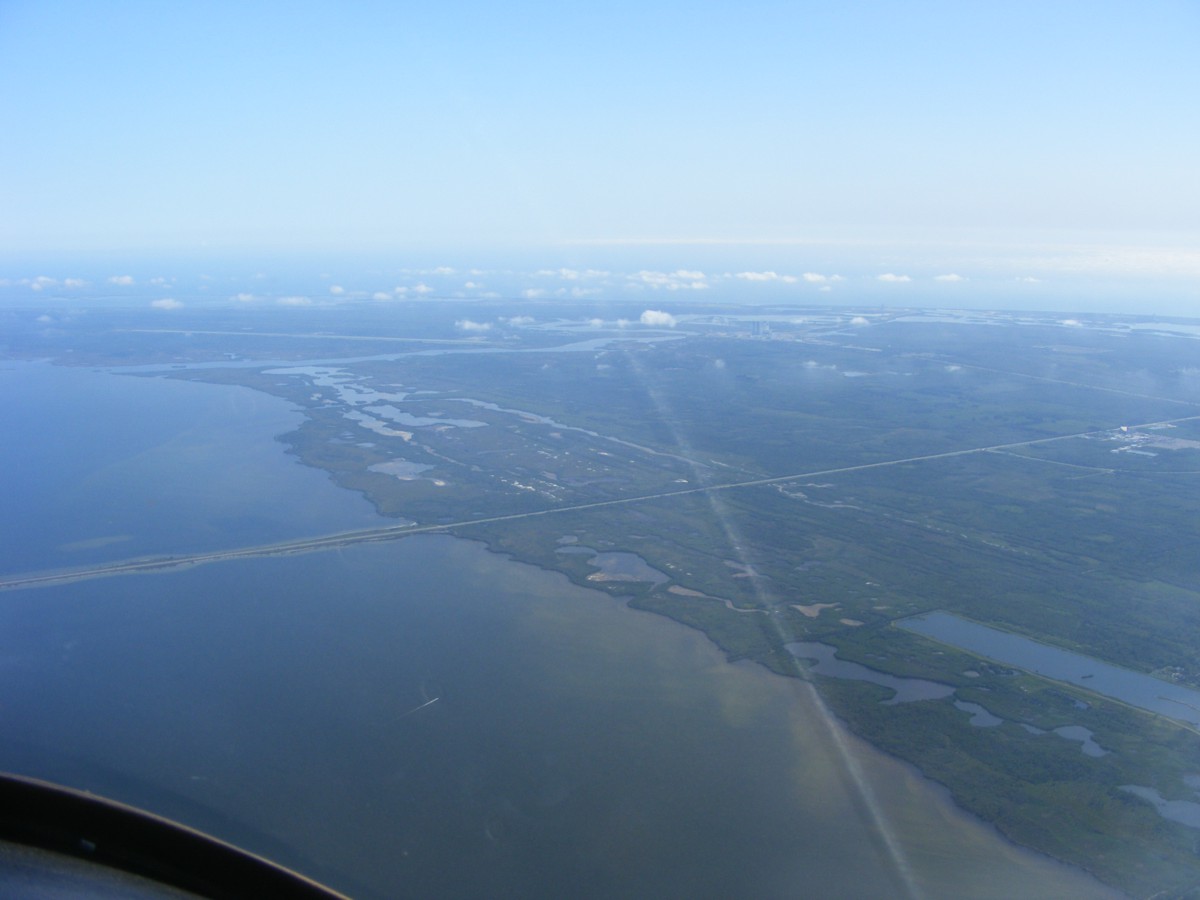 On the ground at Umatilla with full tanks and more folks arriving to fill up as well.  I arrived at the fuel pump and was alone until the pickup truck with an airboat pulled up, followed by the fully-restored Piper Cub.  This photo is also time-stamped at 10:33 AM before I pulled the airplane away from the pump location. 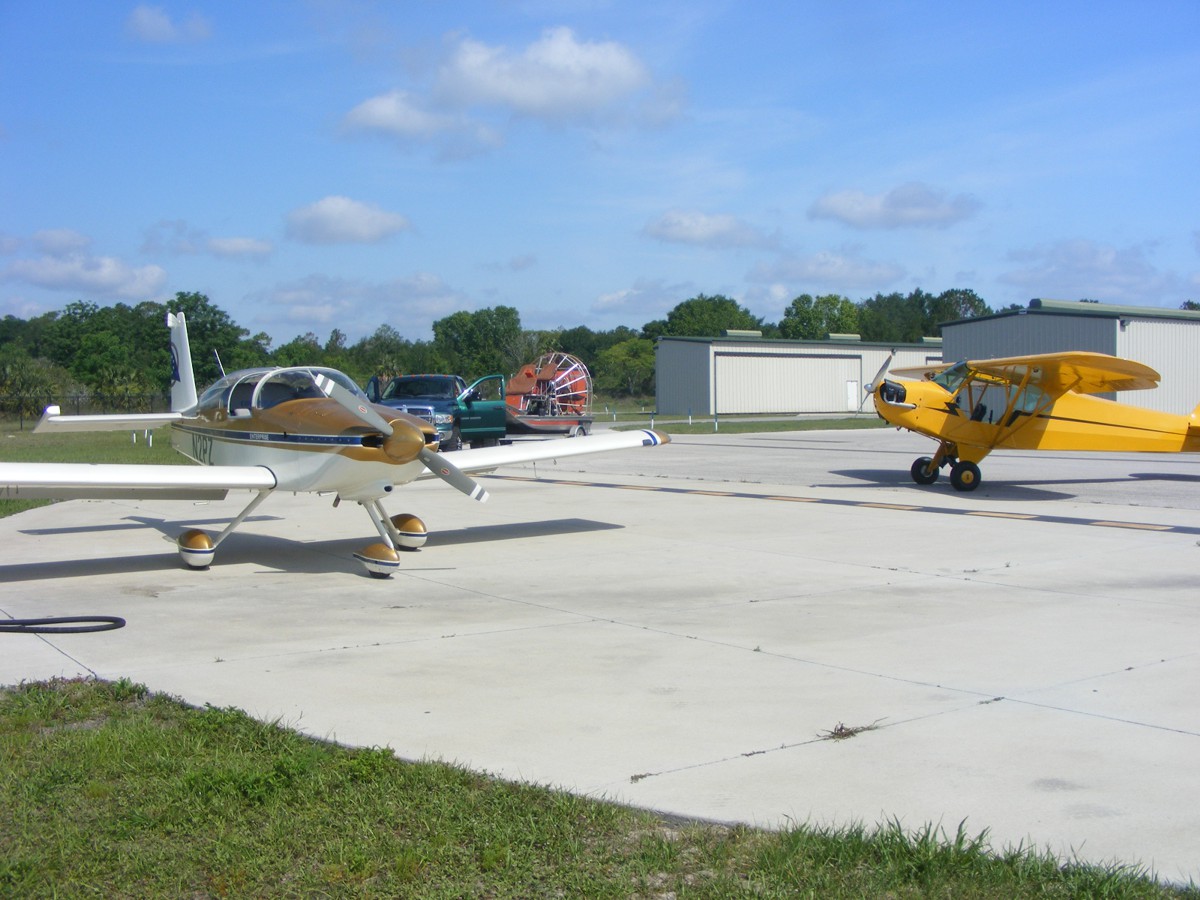 The airboat gets next access to the fuel pump with the cub standing by. 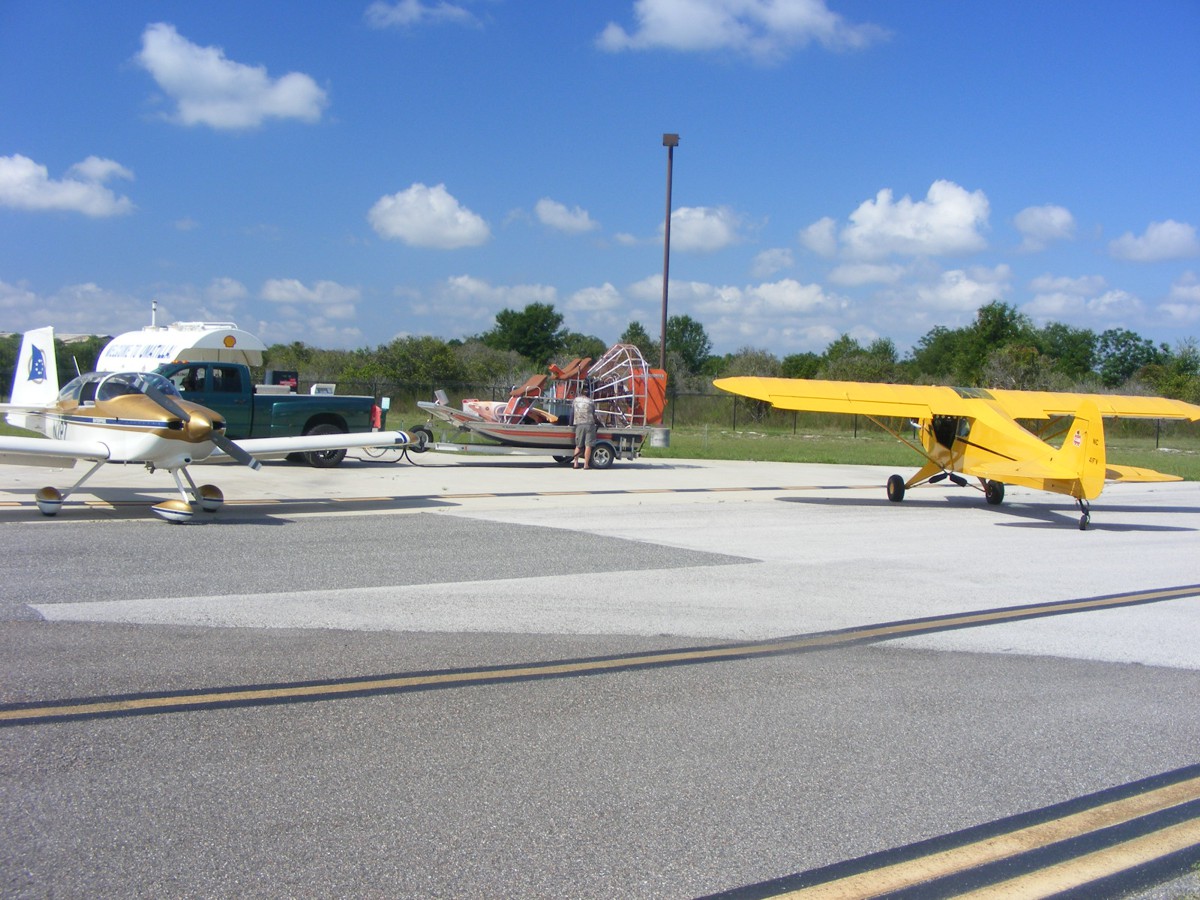 I took this photo with the Cub at the pump as I was walking up to the FBO.  I spoke to the operator on duty and he recognized me from a previous visit I had made here.  His name is Steve Austin and he is not the "Six-Million Dollar Man" from that TV series from 1974 to 1978, actor Lee Majors. 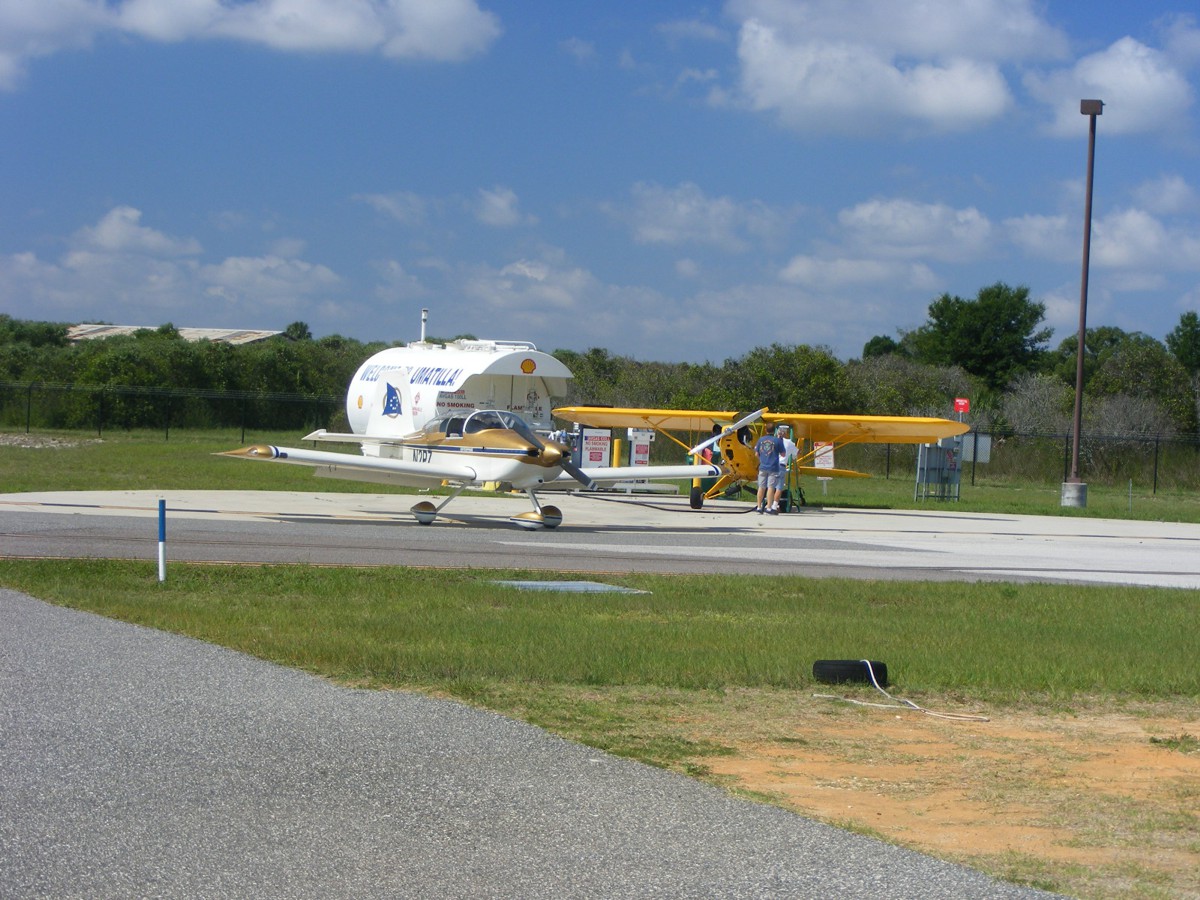 Steve took my photo when I was here a few years ago.  I get to take his photo today.  It has been FIVE YEARS since I moved from Chattanooga to Melbourne, Florida on Memorial Day weekend 2012.  I brought the airplane down on Columbus Day weekend of 2012.  In just another week or so, June 9 will be the 12th anniversary of first flight of my airplane.  Steve was telling his friend about my web site and how he spent several weeks discovering my construction project and all the flight stories.  When I mentioned Jerrie Mock flying around the world SOLO in a Cessna 180 and the GOOGLE EARTH TOURS, he was surprised.  I told him to come here again to see everything that is new via Google Earth virtual flights.  I just realized it has been almost TWO YEARS since I started posting the files to Google Earth Tours. 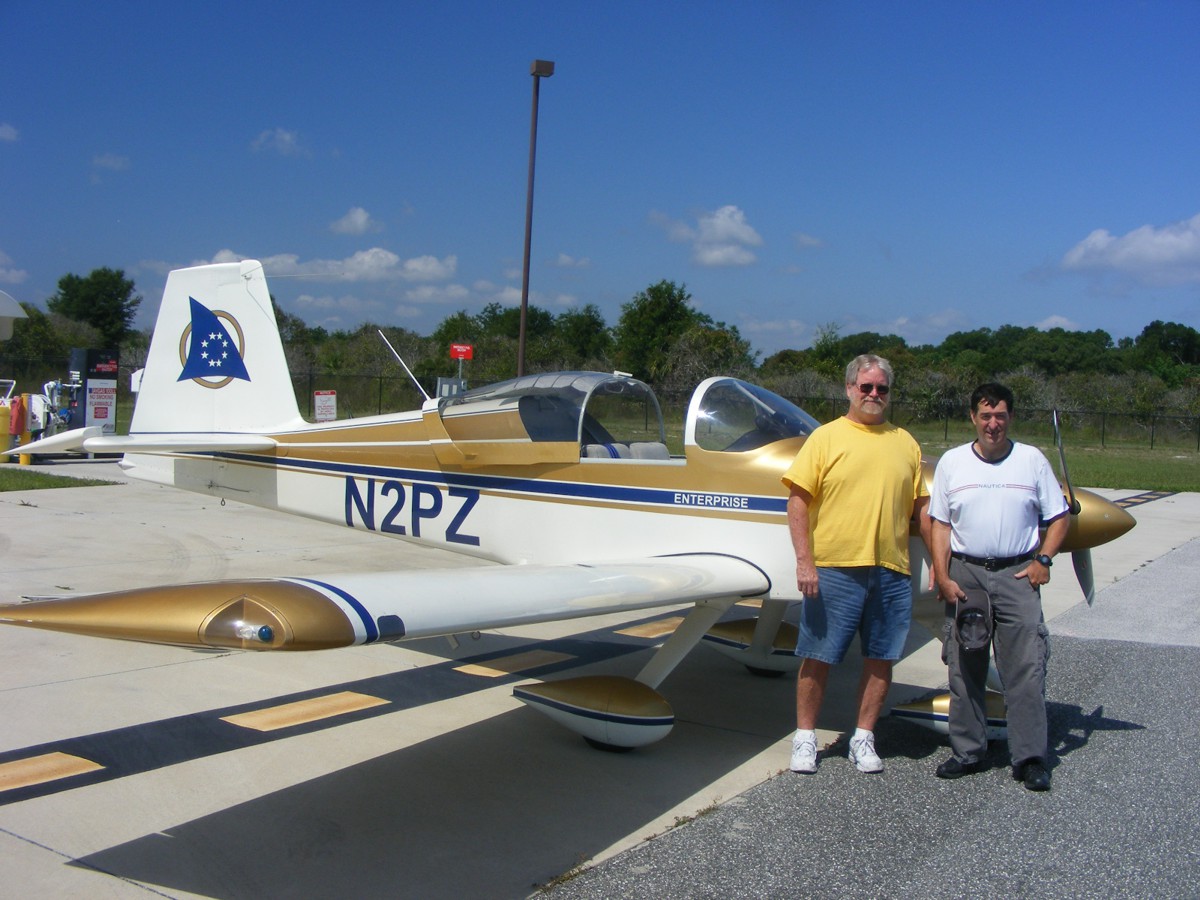 The ride home had a tailwind at 5,500 feet MSL.  I took this image of the Atlantic Ocean as I was turning on a southeast heading on the northeast side of the Orlando Class B airspace.  The air was smooth up here above the haze below.  There were no large cumulus clouds building up today, just a few "puff balls" as you can see here. 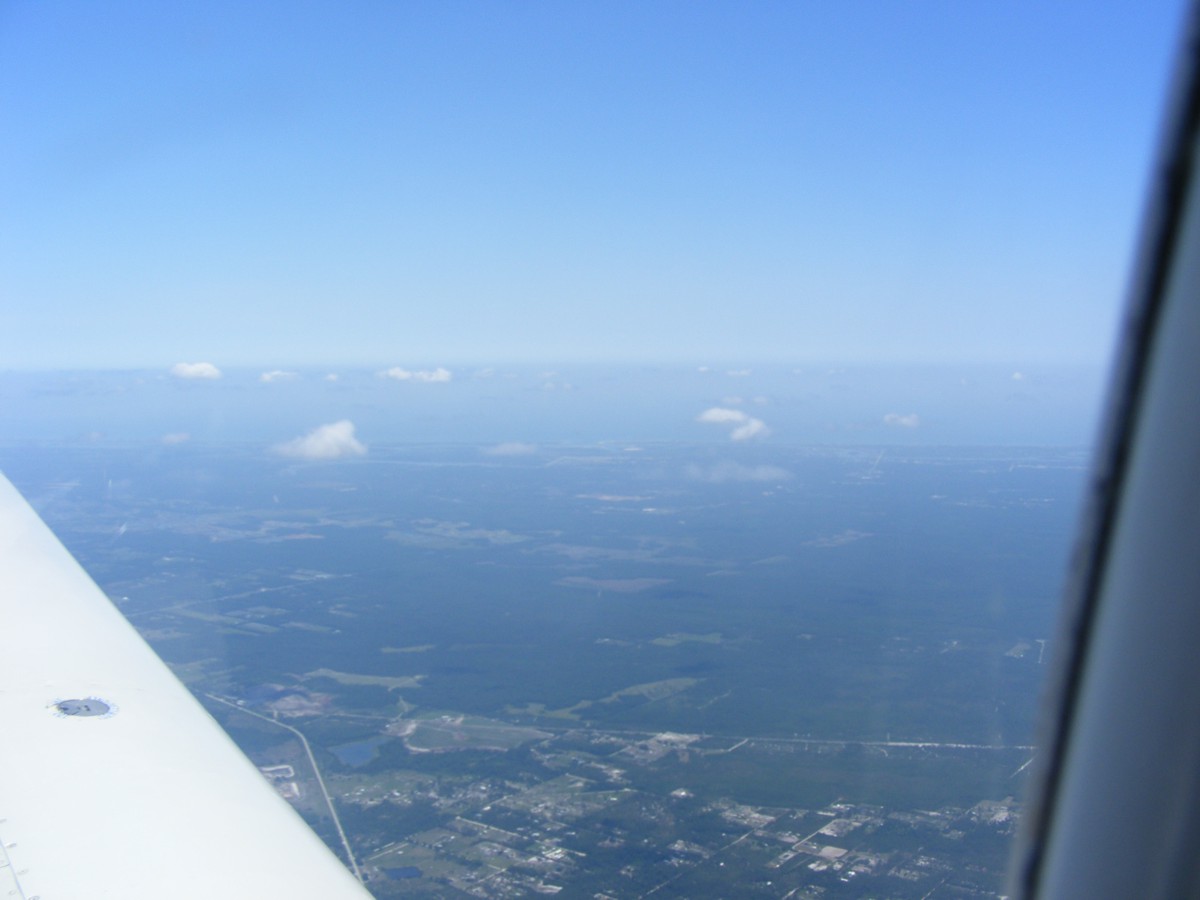 Here is the view on the right side of the airplane featuring Lake Harney located just north of Florida state route 46 about halfway between Sanford, Florida and Mims on US 1.  The Saint Johns River is the source of the water, and the outlet flowing north from Lake Harney. 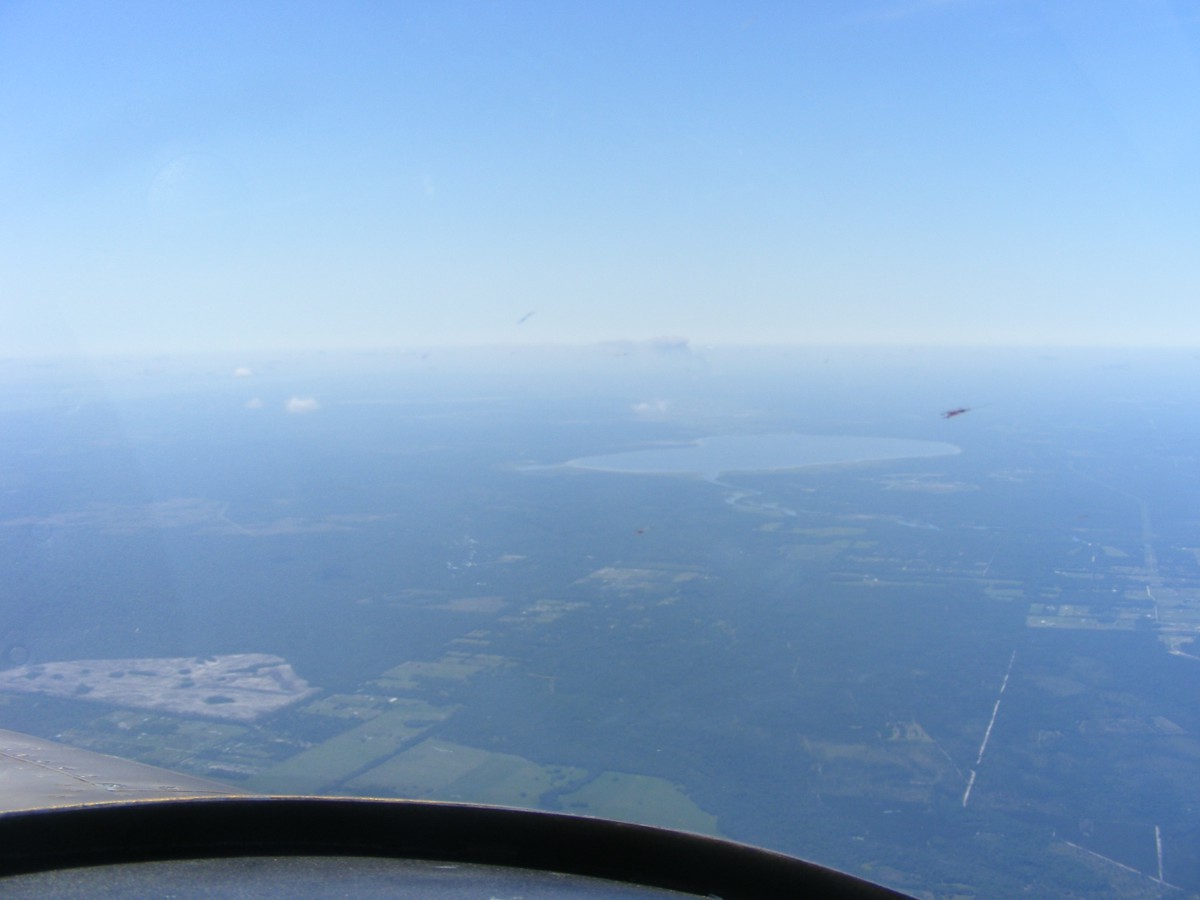 Shuttles have landed on that 15,000 foot long runway at the Kennedy Space Center.  The vertical assembly building (VAB) is beyond the southern end of the runway.  The VAB is about 500 feet tall. You should take the tour to see up close from ground level from just inside.  There is that straight line reflection again.  I realized when I saw this image the object of the reflection is the track for the sliding canopy just to the left of me.  The earlier image was seeing the track on the right side of the cabin.  In this photo, the camera lens was very close to the Plexiglass. 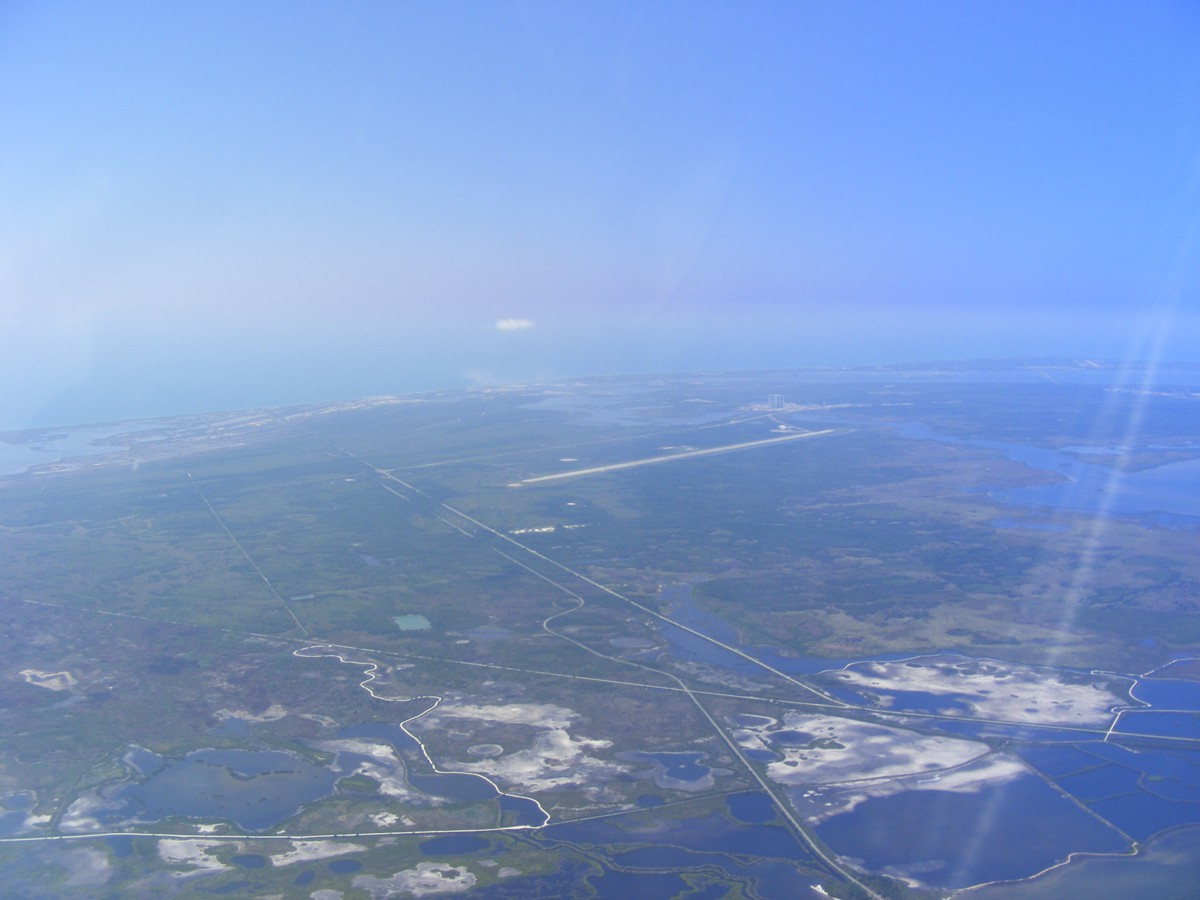 The Indian River is dead ahead and a reflection of the steel support bar is the reflection at the right side of the image. 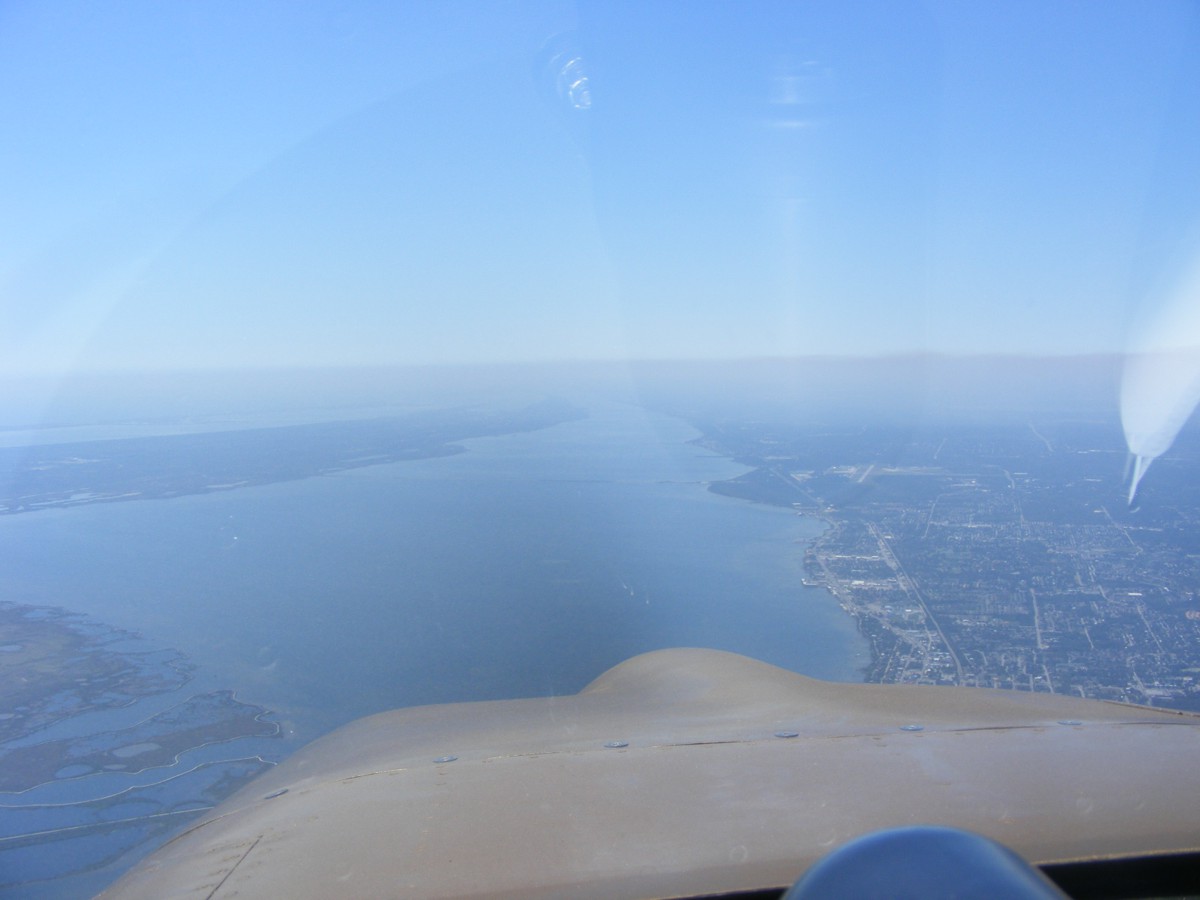 There is a large brush fire west of the Melbourne area seen here.  The smoke rises up to the thermal layer where the winds aloft blow the smoke East out over the ocean.  That black coaxial cable coming out of the panel is going to my GPS antenna not seen in this photo.  The airport down below on the right is Dunn Airport.  I am out over the Indian River to stay clear of any skydivers that could be coming down from 14,000 MSL.  I am cruising at about 4,000 here beginning my descent toward Rockledge. 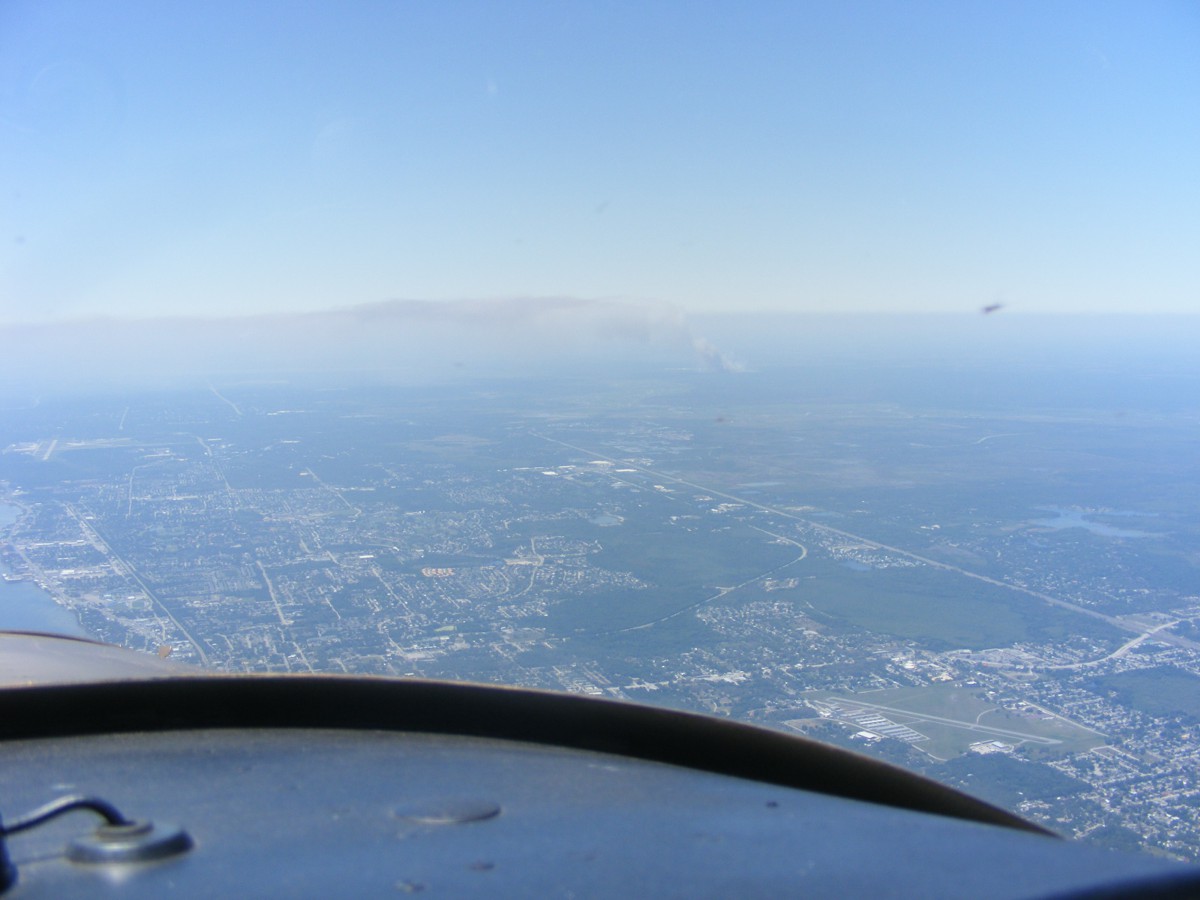 One last look at the Shuttle Landing Strip as I come abeam of it. 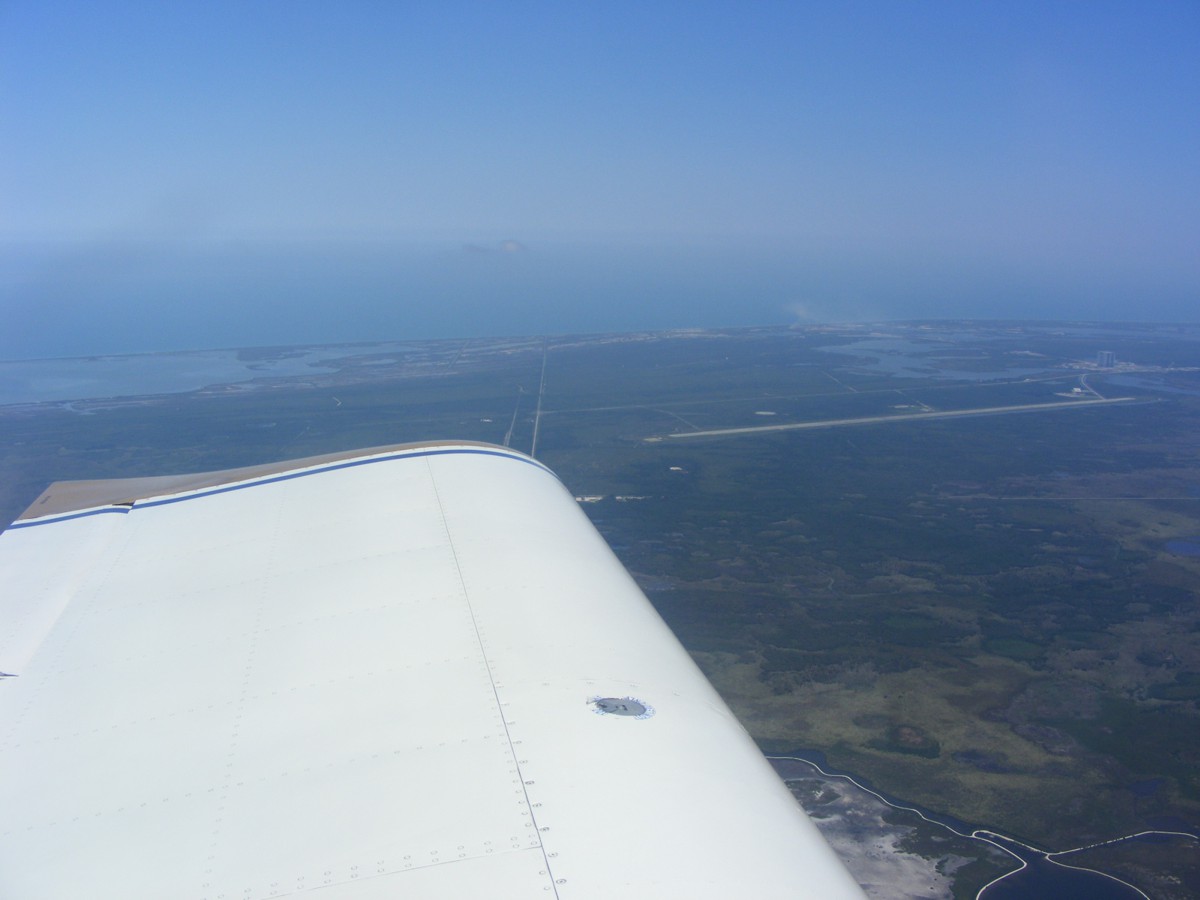 The last photo of the day back home was taken after I aborted an approach to runway 36 and made a go-around to land on runway 18, smooth again and lucky I guess as my log book now has 797 landings since I began flight training in October 1991.  Bill was washing his old car that is for sale. 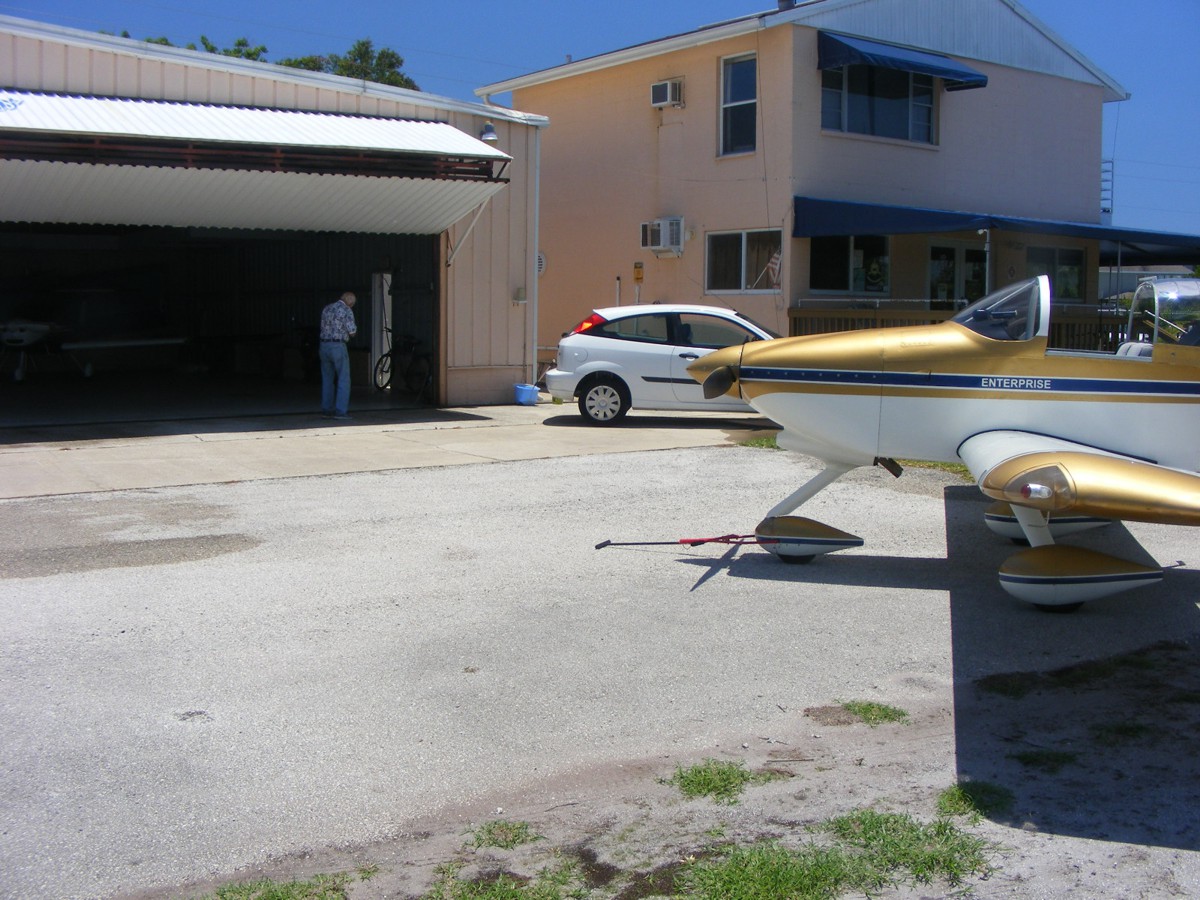