December 28, 2019:  Today being a Saturday gave me some time to clean up some of this web site.  The home page has not been properly displayed on smart phones and PADS until I discovered some errors on font size in my home page.  I used a Google search describing my home page symptoms and the answer was found.  I examined the code on my home page and found the need for </font> was all that was missing.  I also changed the display from centered text to normal text in the Jerrie Mock table that is below my what's new block.  Cell phones and tablets now display my home page as it is seen on computers, "correctly" as I wanted all along.

I looked at my airplane log book and find that my last flight on November 30, 2019 brought me to 50-hour oil change time.  I have the AeroShell 100 oil and the oil filter ready for installation on my next visit to the airport.

January 1, 2020:  I am writing this on January 12, 2020 as I failed to mention anything about the beginning of the new year until today.  It was a very good New Year's Eve with my best friend Linda sharing a kiss at midnight as the lighted "2020 Cloud" dropped here in Saint Cloud, Florida.  The center of this town had several streets blocked off with local bands setup at three locations and street vendors lining those streets with beer, wine, and snacks available.

I am updating the web site for another airplane maintenance event as you can see below.

January 11, 2020: I went to the airport to do the oil change on my airplane.  I remembered to take one photo before getting the airplane all buttoned up for the next flight.  This image was taken just after draining four quarts of oil from my engine.  I remembered to plug in my oil sump heater to get the old oil to flow freely into that old gallon milk jug.  The AeroShell box still has six quarts of new oil inside.  A few minutes before I took this photo.  There were a couple of main wheel wooden chocks on the floor with the case of oil sitting on them.  The chocks and the case of oil were just high enough to put the empty milk jug below the quick drain and allow my oil drain tube to get just inside the top of the milk jug. 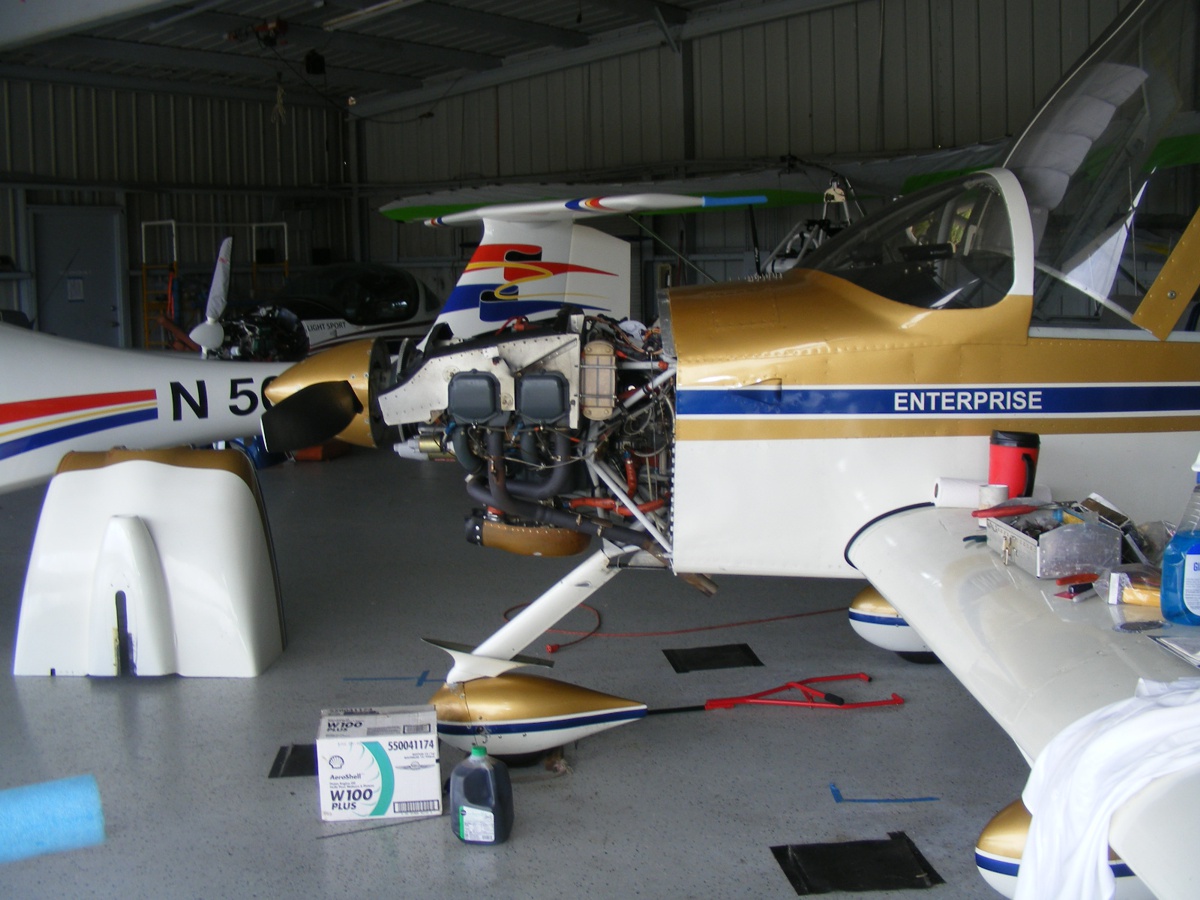 When I started to fill the engine with FIVE quarts of AeroShell 100 PLUS aviation oil, I remembered to plug in my oil sump heater again so the oil would be warm and very easy to circulate when it is time to start the engine.  I always have the fuel knob in the cut-off setting when I turn on the starter and watch for indications of oil pressure on my engine monitor.  When I was satisfied the NEW oil was coating all the moving parts.  I let go of the starter switch, pushed in the RED fuel knob for normal fuel flow and started the engine, keeping the RPM under 800 until the engine was smooth and quiet out on the ramp in front of the hangar.  I gradually brought the RPM up to 1,800 as I do for a normal pre-takeoff test.  I wanted to be sure I would get a response from the propeller when I moved the BLUE knob to fill the two oil cylinders in the prop hub.  After that, I brought the engine down to idle power, locked the left main brake and turned the airplane toward the open hangar door and brought it just inside the door and shut it down.  It is so much easier to turn my airplane around using the tow bar when on the flat floor inside the hangar.

The Hobbs meter did not tick over from 435.0 hours from the short engine run time to get the oil circulated on the ramp test.

There are TWO Faeta light sport fiber glass airplanes parked in the hangar as you can see in the background of the image above.  Both of them had fuel tank leak issues and Billy has resolved both of the leak issues very nicely.  Both of them have been test flown and are ready to go back into normal flight status.

March 1, 2020:  This was the first time I flew my airplane since November 30, 2019.  Today's flight had a touch-and-go landing at Valkaria Airport (X59) followed by a flyby of the Sebastian Airport where parachute jumpers were ready to jump from 14,000 feet as I kept my distance flying around the south side of their airport before heading north along the Indian River.  This map segment is from Garmin MapSource showing my GPS ground track at the south end of my flight today. 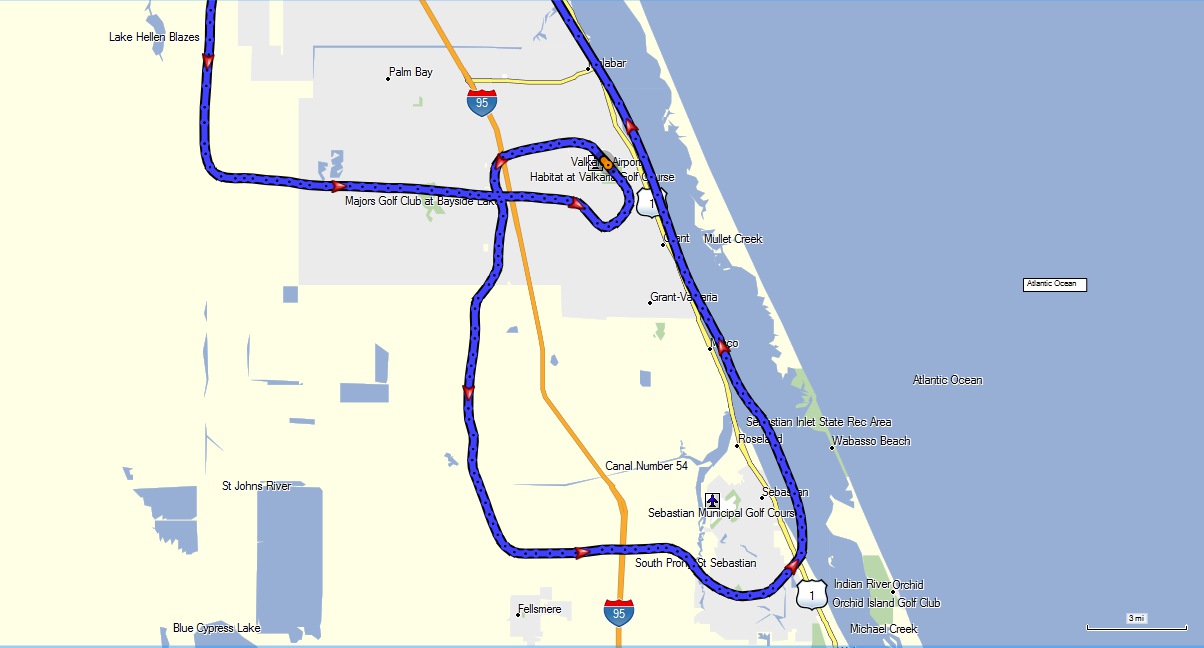 Here is my departure and return to Rockledge Airport using runway 36. 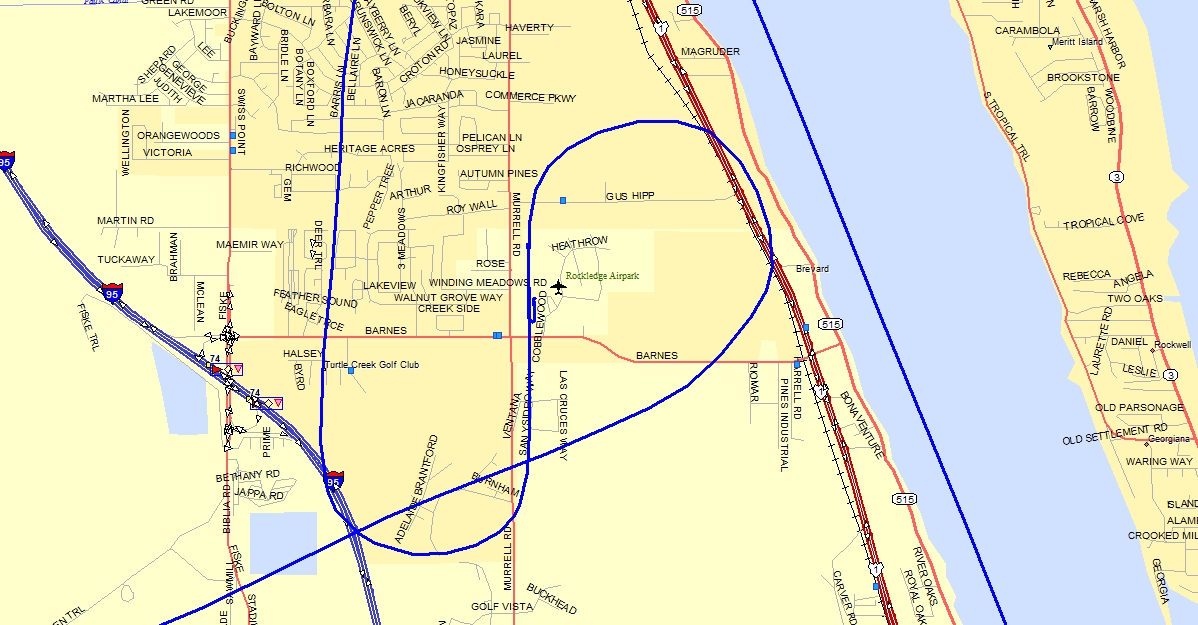 Here is the big picture of the entire flight.  It always seems I cannot get a good magnification on Street Atlas USA with the GPS track filling the screen with the best display. 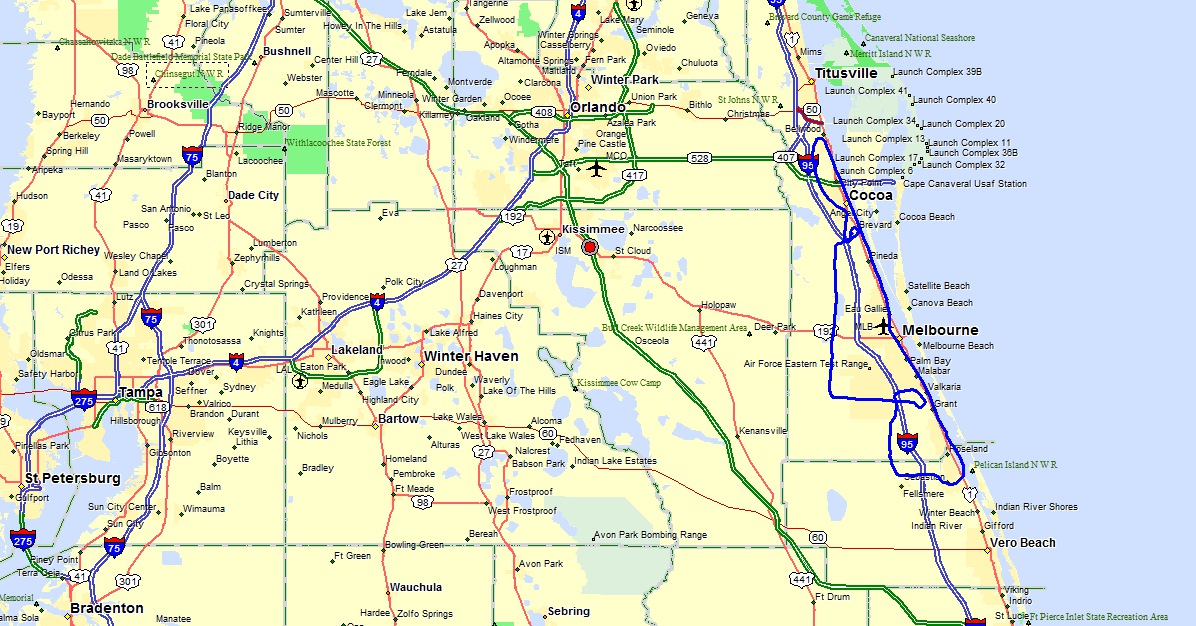 Here is part of what I saw today as I headed south just west of the Saint Johns River at the bottom right corner of this photo west of Melbourne, Florida.  I-95 does its zigzag through Palm Bay, Florida not far from where I live. 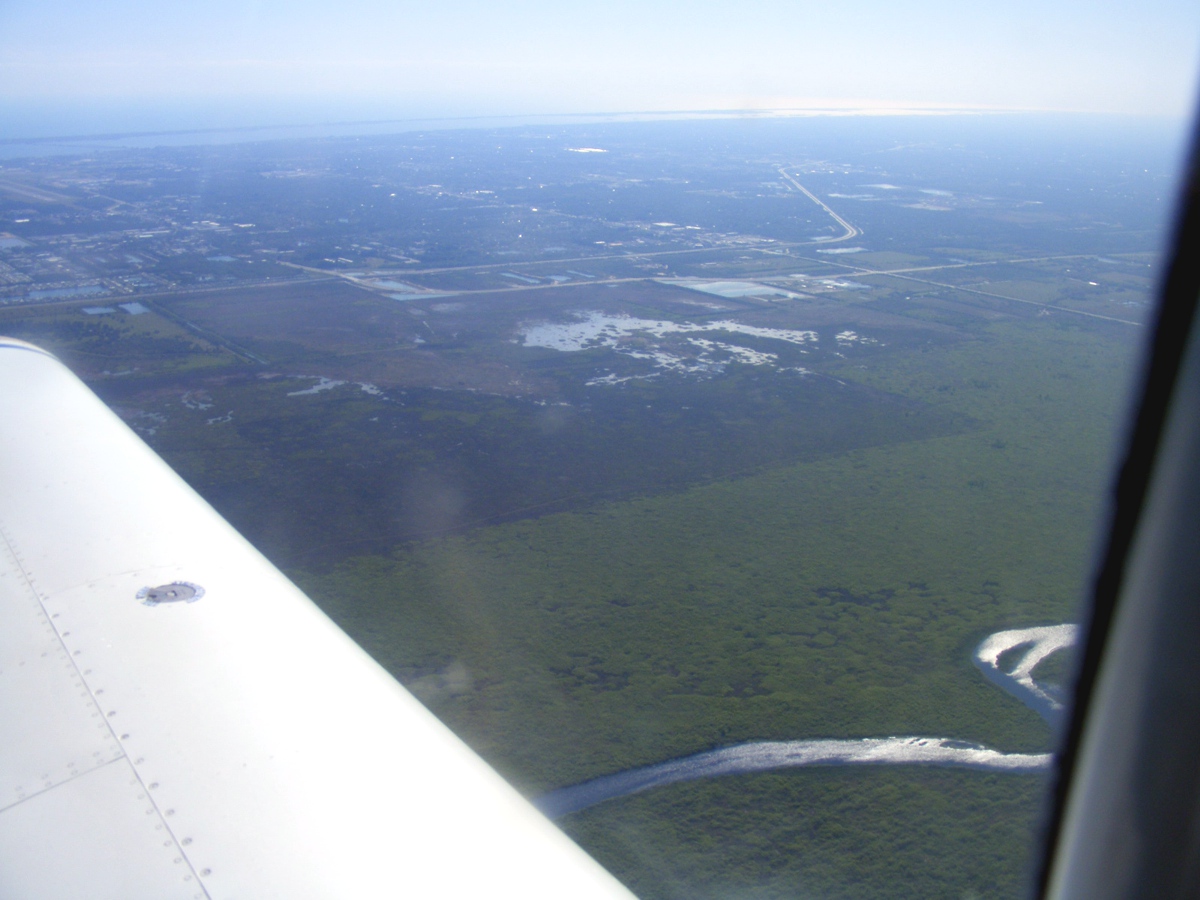 The next photo is similar to the one above with a bit more to see as the airplane gets closer to US 192.  It was a humid day as you can see. 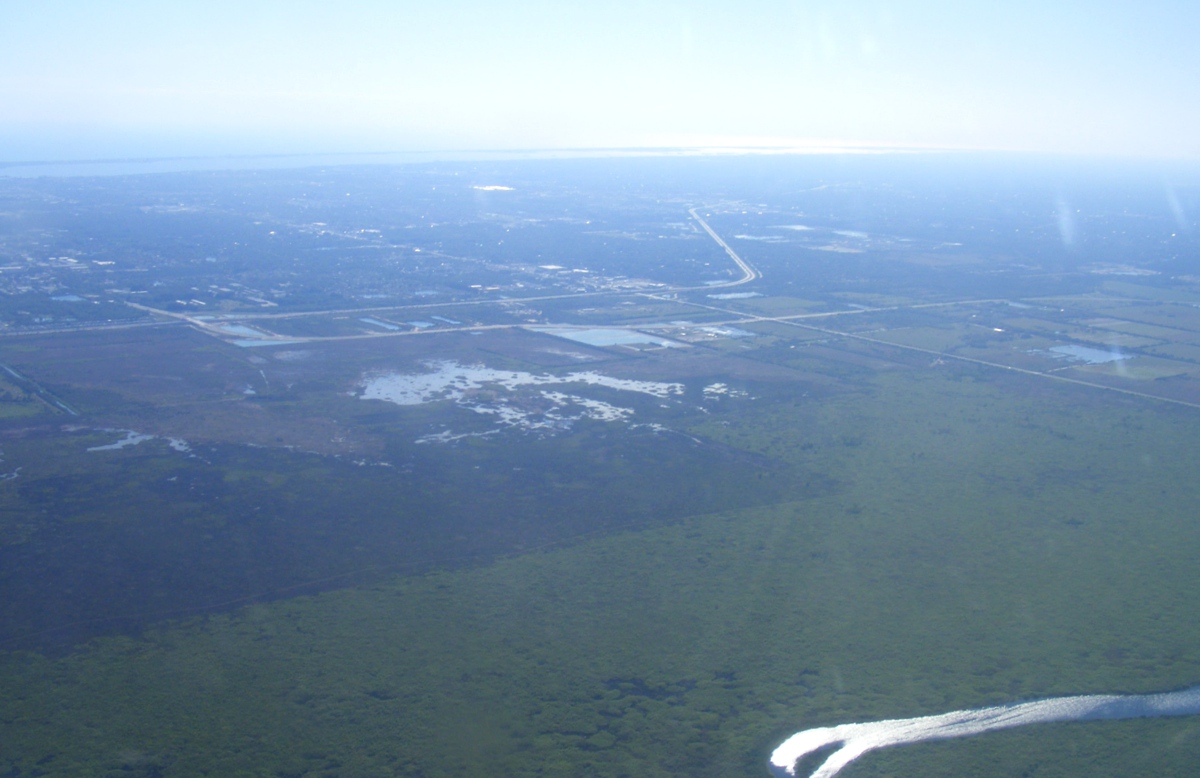 I did not take any photos until after I made my touch-and-go landing at Valkaria and the flyby south of Sebastian Airport.  This photo was taken from a point over the town of Sebastian about two miles southeast of the airport at about 3,500 feet MSL.  The Sebastian River is just ahead of my left wing tip seen here. 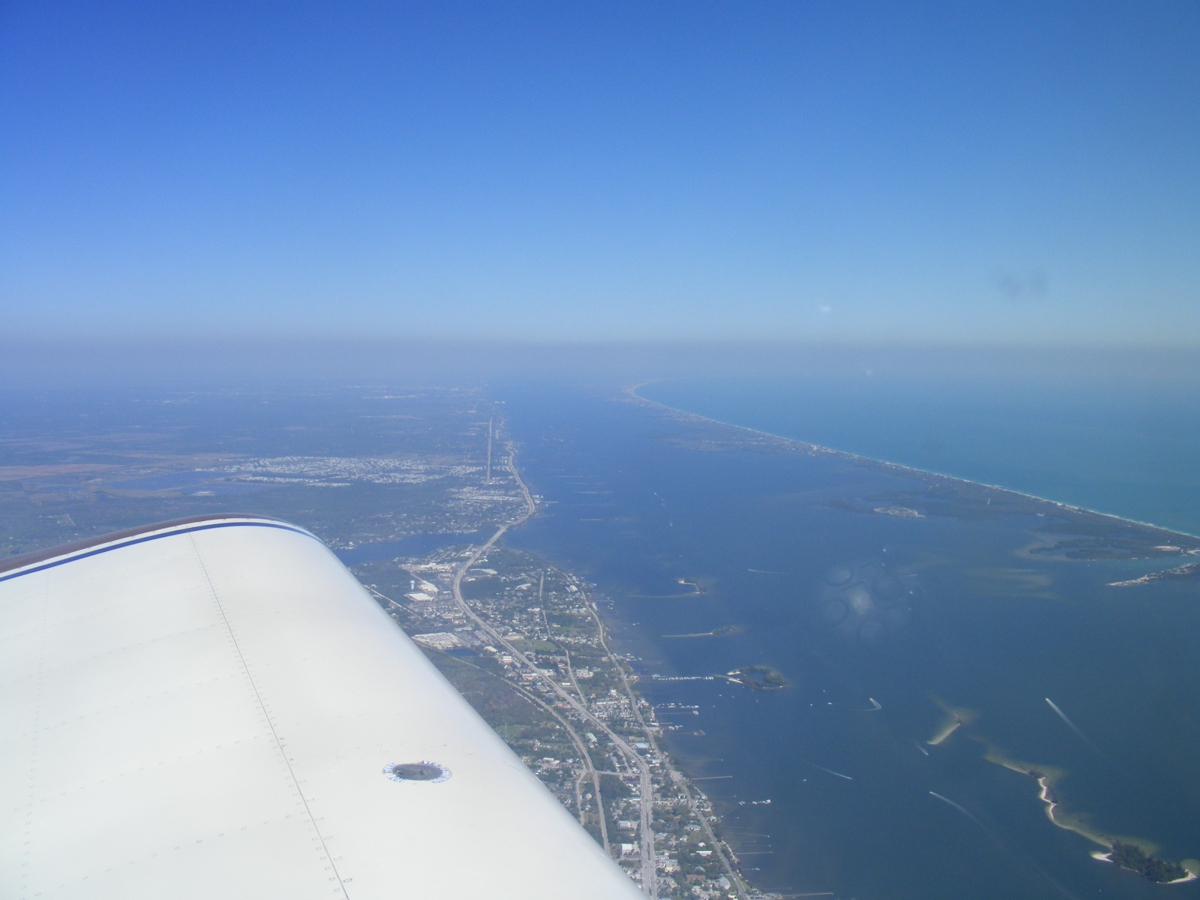 That is the Pineda Causeway coming from Patrick Air Force base connecting to US 1 and going over to I-95.  This view is looking north up the Indian River Lagoon. 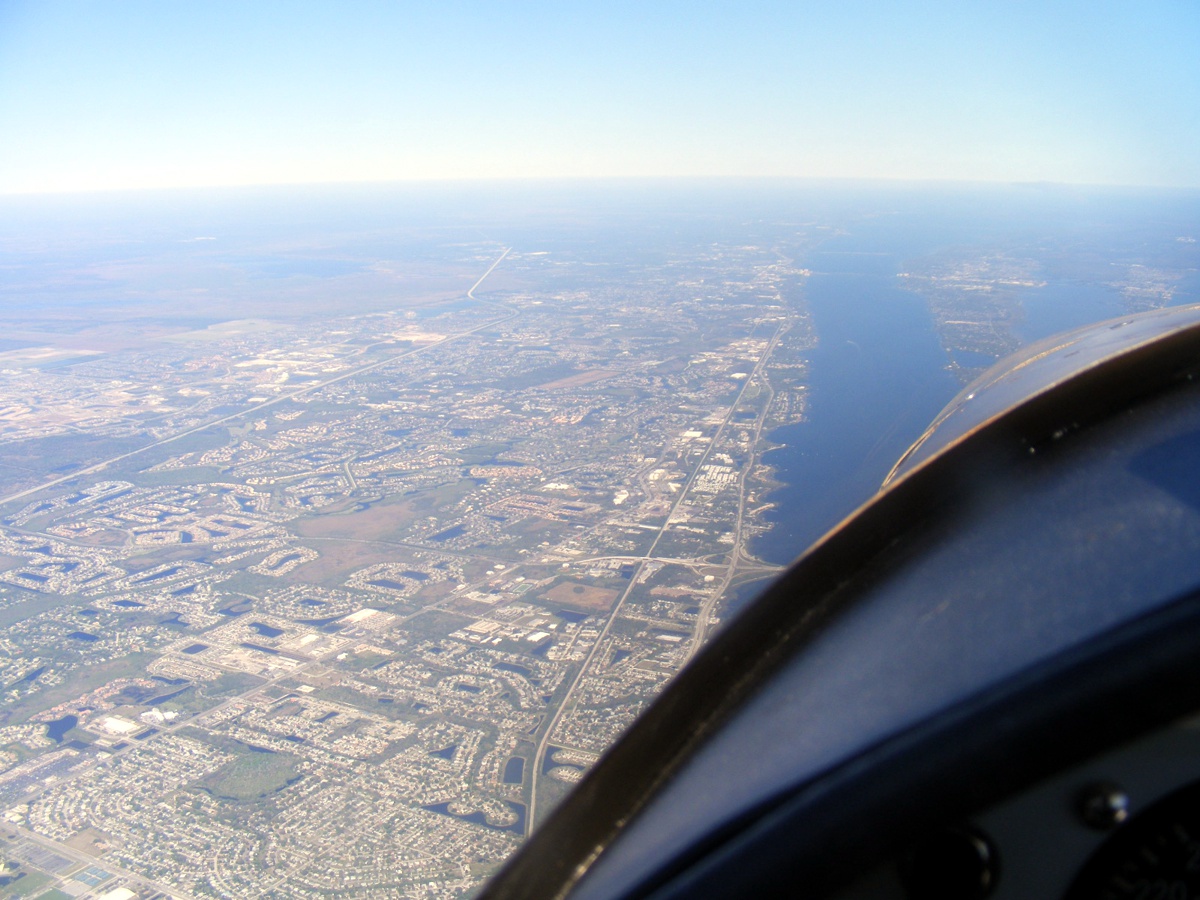 The view on the other side of the nose of my airplane shows Patrick Air Force base between the Atlantic Ocean and the Banana River.  The Pineda Causeway ends at the junction to state highway A1A near the ocean. 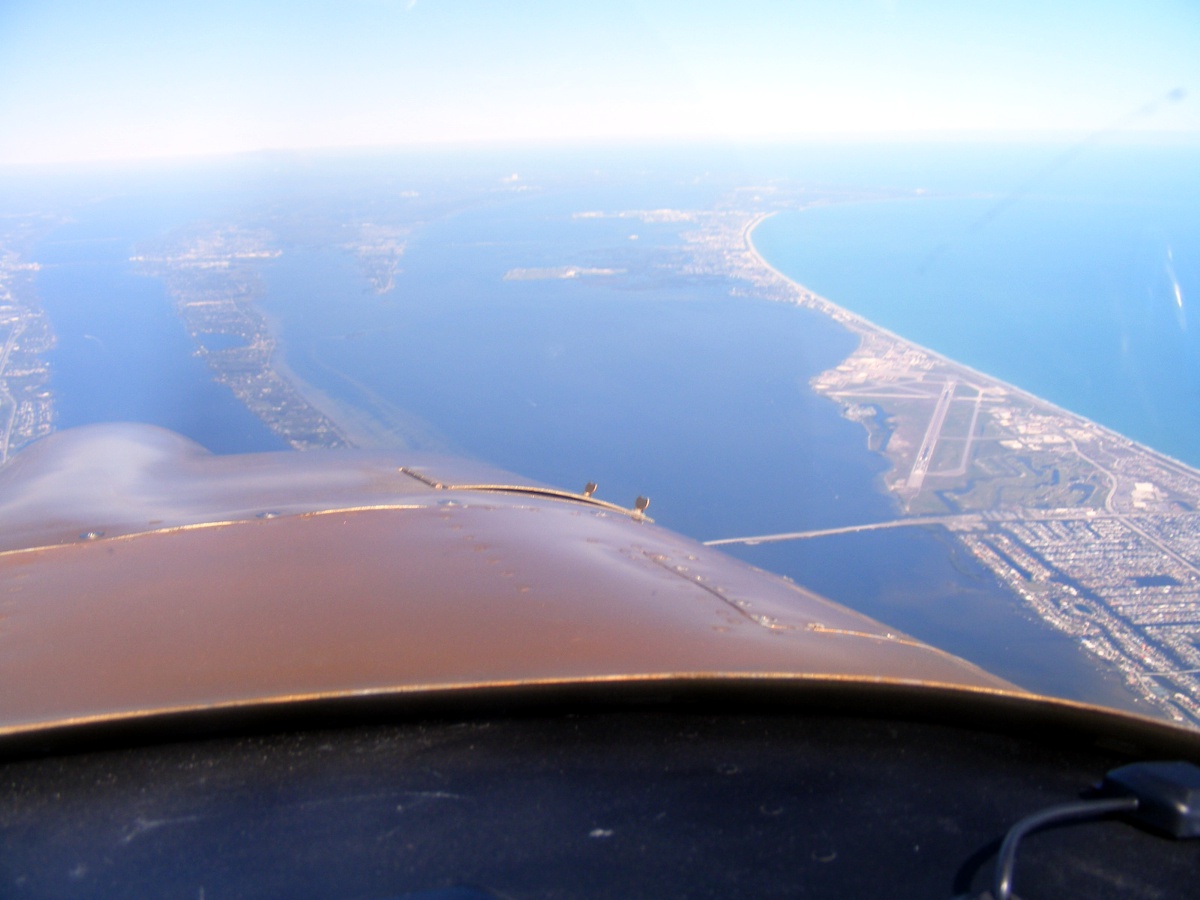 I-95 going north has a big S-Curve west of Rockledge.  The exit there is the one I use coming up from Palm Bay to get to the Rockledge Airport. 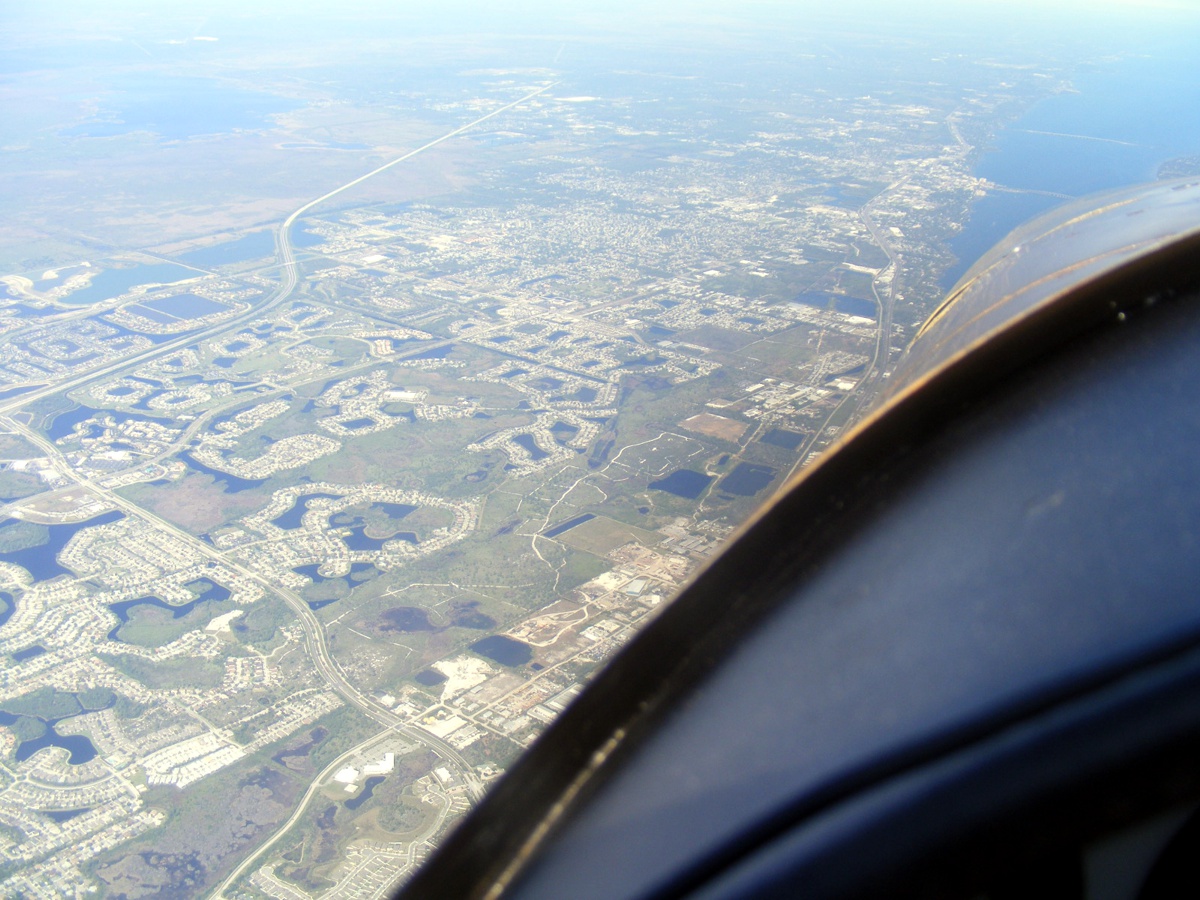 Downwind view into the landing pattern for Rockledge Airport. 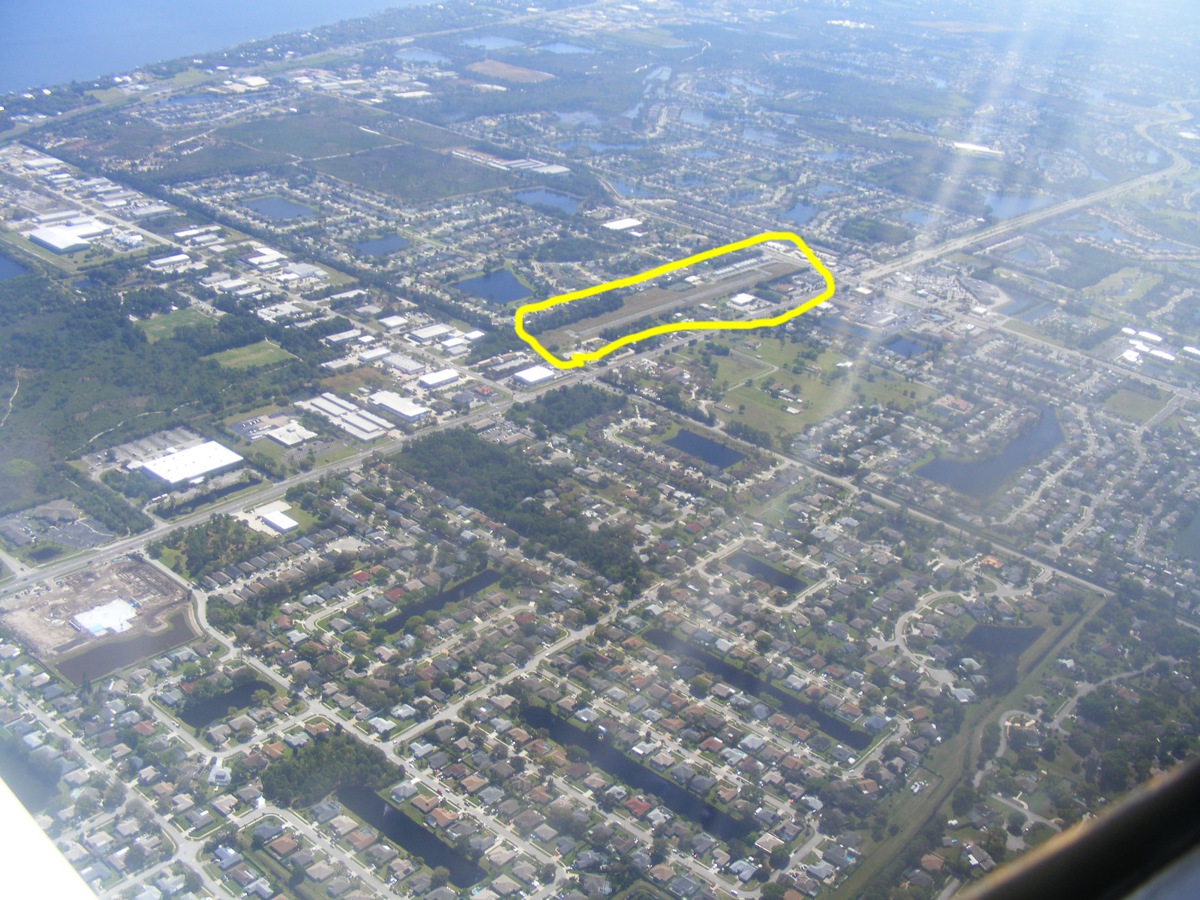 Here is a closer view of the 2,000 feet of paved runway as I get set up for a landing from the south. 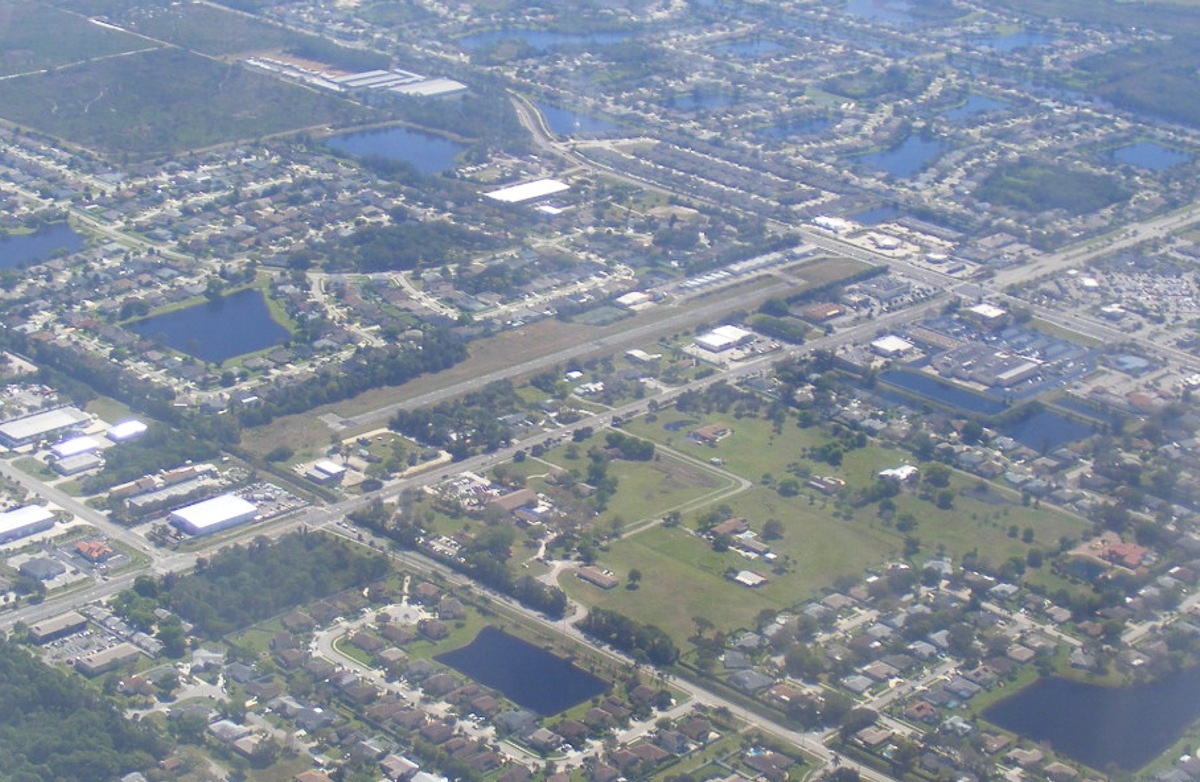 Here is a Google Earth view of the approach to runway 36.  This is a safe image as I am busy flying my airplane and not using my camera when I am on approach. 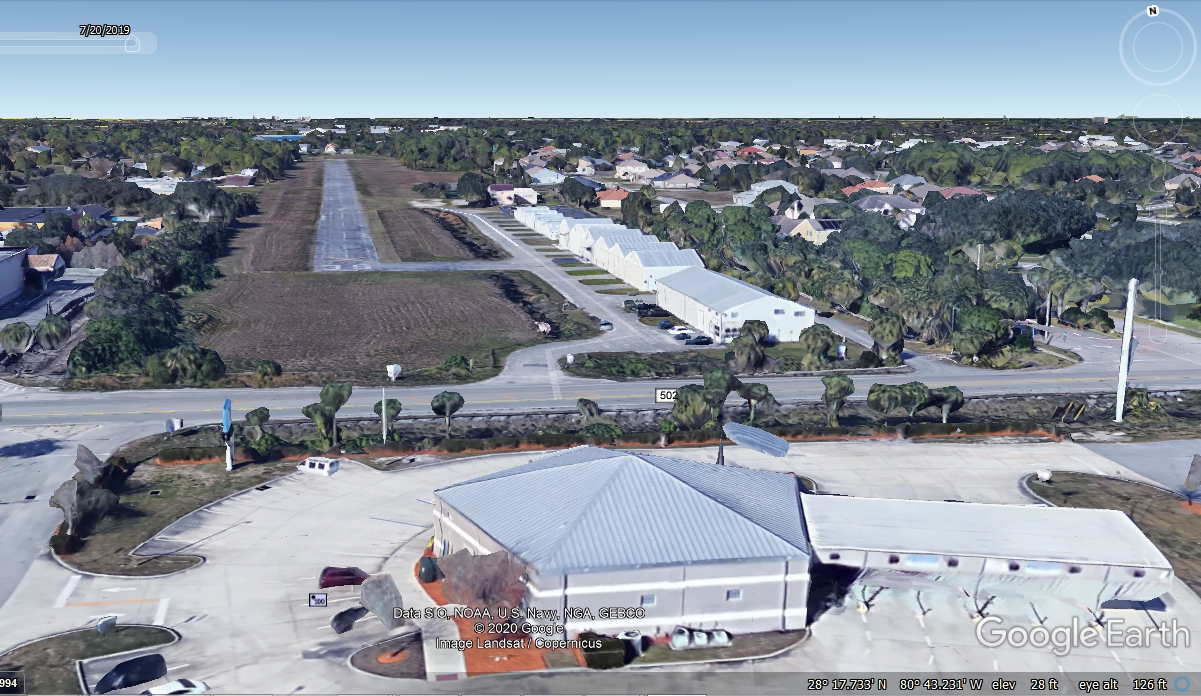 Exit 195 is the route to the east to the airport. 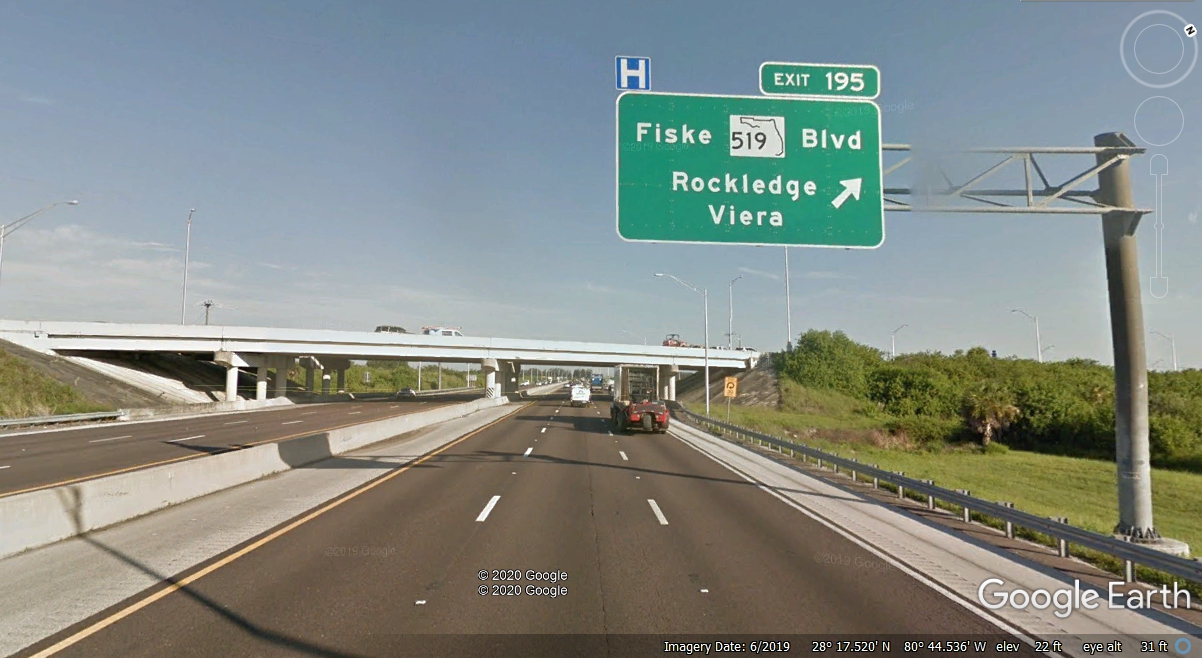 Aerial view from I-95 to the Rockledge Airport. 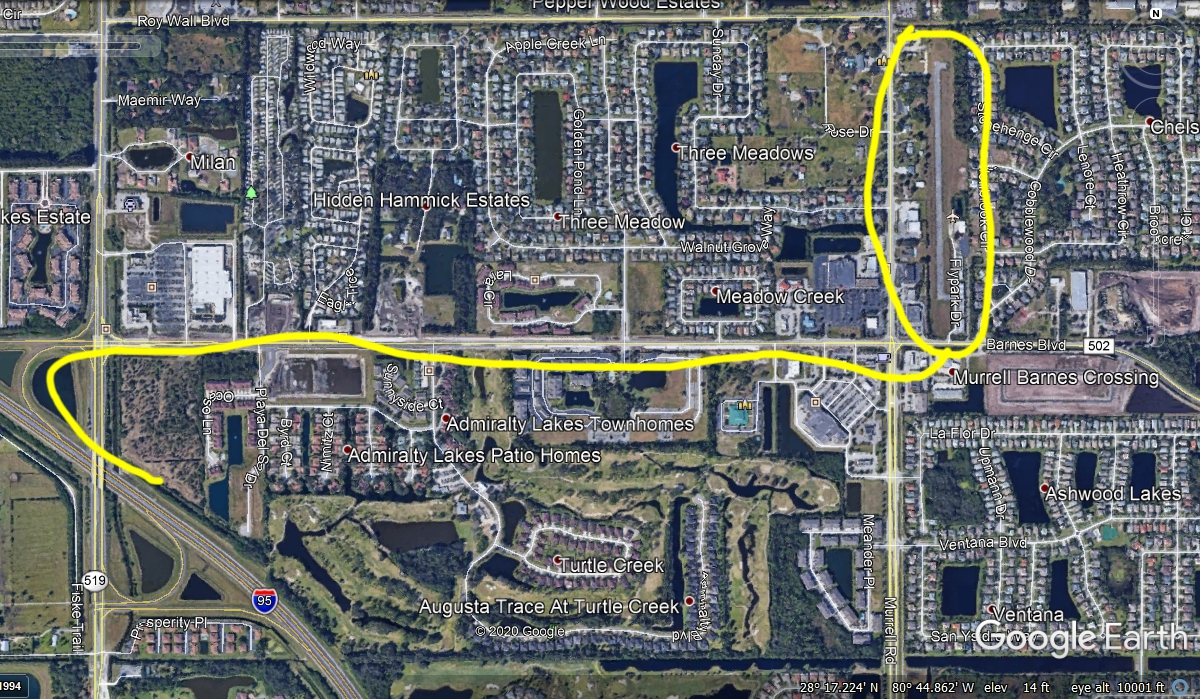 The street view of the airport. 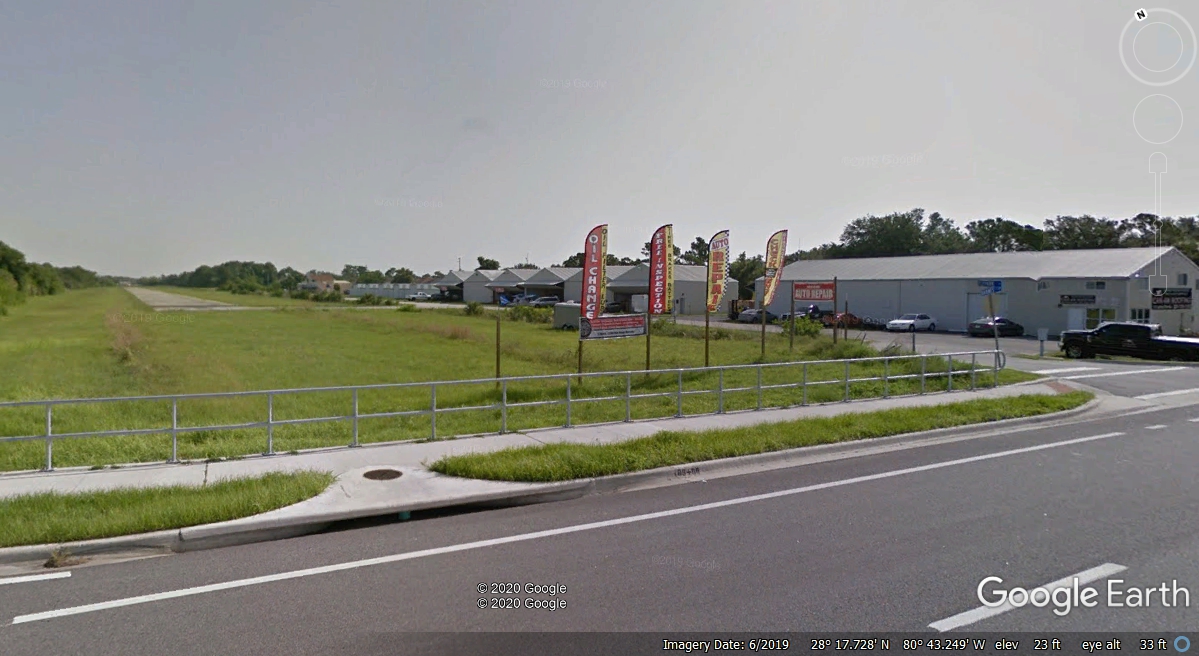 Today's flight added 1.3 Hours to my Hobbs meter which now shows 436.3 hours total time since new for my airplane.

April 10, 2020:  I have been busy on other life projects that do not involve my airplane, until today.  I bought a tube of "FUEL LUBE" from Aircraft Spruce and Specialty that had a price just over thirteen dollars.  With freight, the price was over twenty-two dollars.  I have been struggling with the fuel caps the past few times I have purchased AVGAS.  I put a liberal coating of the fuel lube on the O-ring and worked the cap locking lever to be sure the lube was also under the O-ring between it and the metal parts of the fuel cap.  The effect was immediate as I can now remove and replace the filler caps on both fuel tanks with ease.

As for my distractions, this computer has been acting up for the past month or so.  I have removed a bad 8 GB RAM memory chip and ordered TWO replacements that are on the mail truck to be delivered today.  I am "limping along" with just one 8 GB chip as I write this web page update.  I am also getting computer messages to register my Windows 8.1 operating system.  I managed to get a phone call to a Microsoft agent located in INDIA, I presume by her dialect.  She told me a few things I have already done, then she said she would have a Microsoft engineer call me after I had given her my 25-characters of my Windows 8 software key.  I cannot update some of my software and hope that when the registration issue is resolved, my office at home will have full computer capability again.

The other big project I have been doing is to create 40 web pages full of photos and Google Earth images about our 2019 summer vacation in the last week of July.  We made a tour of the USA from Florida to the Great Lakes.  We made visits to the USAF Museum at Warner Robins Air Force Base in Georgia and the USAF Museum at Wright Patterson AFB near Dayton, Ohio.  We also spent some time at AirVenture in Oshkosh, Wisconsin before we headed up to Lake Superior at the northern END of US 41 in the upper peninsula of Michigan.  You can see all the photos we took and some relevant images from Google Earth with each and every one of those with their name on them.  They helped me tell the story at some locations that I could not do with just the photos taken by my partner Linda and myself.  In the NINE days we were on the road, the total mileage for the trip was 3,985.1 miles unless I find some GPS ground tracks I have not added to my Street Atlas 9 file for the complete trip.

April 15, 2015:  The computer is ALMOST back to normal.  I contacted my web server company this morning to get some information I needed to get my n2prise.org emails running again.  I had made some minor password changes a while back and failed to update my printed page of passwords.  I will get the spread sheet updated after I post this page.  I also did not have a written text on the web link on my desktop that allows me to drag and drop these updated web pages on that link to put them on the web server that puts this web site on the world wide web for you guys to read.

I gathered most of the software discs I needed to get all the items that were lost as part of my REFRESH of my Windows 8 operating system.  I have also run the DVD for the Windows 8.1 upgrade.  I had downloaded the ISO file a few years ago to do that when the computer was "new" and now I have done it again when the refresh made sure my operating system works properly again.  That one piece of software that is hiding in my office closet is Adobe Acrobat version 7.0 that scans my documents for expense reports, etc.  That version has a 7.01 upgrade that I will have to do again after I get that software over here in my office at Linda's house near Kissimmee and Saint Cloud.

I can tell I am almost finished by looking at all the icons on my desktop.  I deleted McAfee virus that came with Windows 8 in order to use Windows Defender.  I just saw a screen pop up trying to get me to put McAfee back on my computer as an active program.  Nope.

May 1, 2020:  It is a Friday night as I am updating this web page with current information.  I finally posted my photos and maps from my flight on March 1, 2020.  Tomorrow, I get to go flying again as the weather for tomorrow is forecast for clear skies all day, Saturday, May 2, 2020.